These days, there’s a special day honoring just about every food imaginable. But when it comes to doughnuts, we don’t mess around. Here at VegNews, we are celebrating National Doughnut Day, and we’re going big. To get this doughnut party started, we’ve rounded up 10 of the most mouthwatering vegan doughnuts from the country’s best-known bakeries. Just how wild did we go? You’ll have to read to find out … 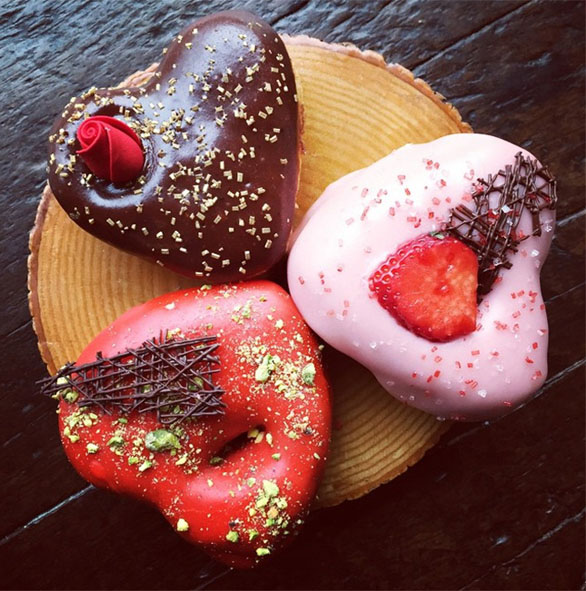 Brooklyn’s Dun-Well’s Doughnuts
With more than 600 flavors under its belt, it’s no wonder that Dun-Well is consistently named one of the nation’s top doughnuts. Owners Christopher Hollowell and Dan Dunbar bake twice daily, always starting with the basic chocolate, vanilla, and berry flavors. “After that,” the pair says, “we just play.” To celebrate National Doughnut Day, Dun-Well’s is giving away free doughnuts with their new line of espresso drinks. We’ll take a Salted Caramel Latte and a baker’s dozen to go, please.
Customers are loving: The Peanut Butter and Jelly sells out every single day
Bakery staff favorite: The Turtle with chocolate chip cookie dough, dark chocolate, chocolate-caramel icing, pecans, walnuts, and hard caramel glass 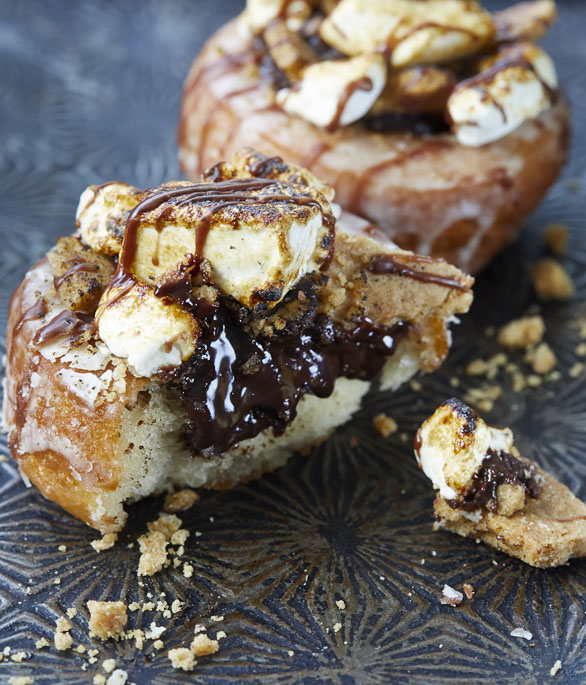 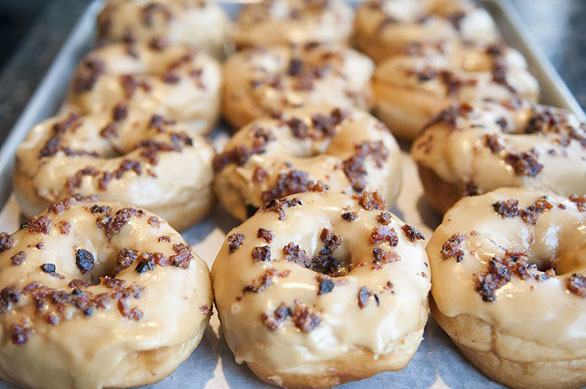 Atlanta’s Revolution Doughnuts
This mom-and-pop bakery, opened three years ago on National Doughnut Day, hopes to “revitalize the American doughnut” by making delicious creations all by hand. With a plethora of vegan treats to choose from, the shop offers egg- and dairy-free twists of traditional flavors (Cinnamon Apple Fritter) as well as their own unique flavors (Orange Pistachio). Today, they’re celebrating their third birthday by giving away free mini birthday cake doughnuts with every purchase.
Customers are loving: Vanilla Bean made with real vanilla bean
Don’t miss: Fresh Peach Sliders filled with Georgia peaches and dusted with sugar 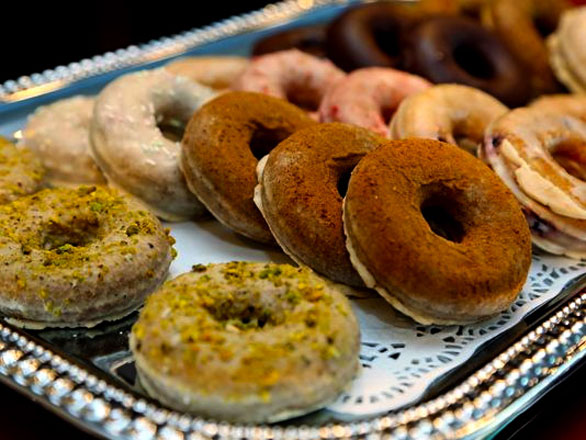 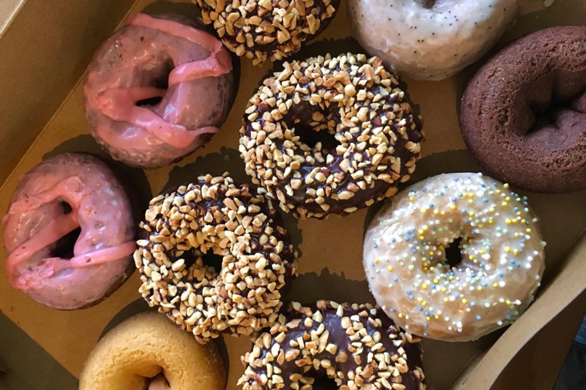 Mighty-O Donuts
Inside Seattle’s Mighty-O Donuts, you will find organic varieties of tried and true classics like vanilla and chocolate glazed cakes, yeast-risen treats, and jam-filled gems. What you won’t find are any GMO’s, artificial flavors, colors, additives, dyes, preservatives, and you guessed it: no dairy or eggs. Upon opening its doors in 2003, Mighty-O has made it their mission to incorporate their do-good attitude into its business model, making it easy for donut lovers to feel good about purchasing a dozen….or two dozen.
Customers are loving: French toast boasts a spiced cake donut with a maple glaze.
Don’t Miss: the yeast-raised Apple Fritter contains chunks of fresh green apples. 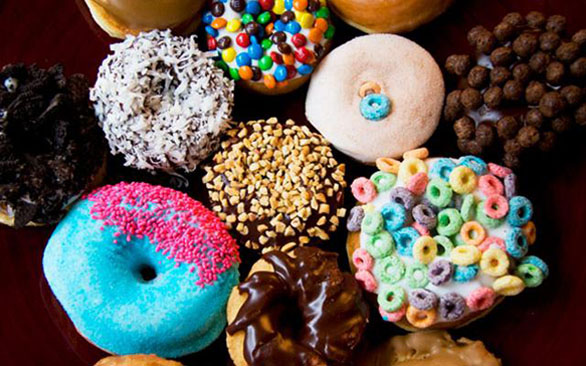 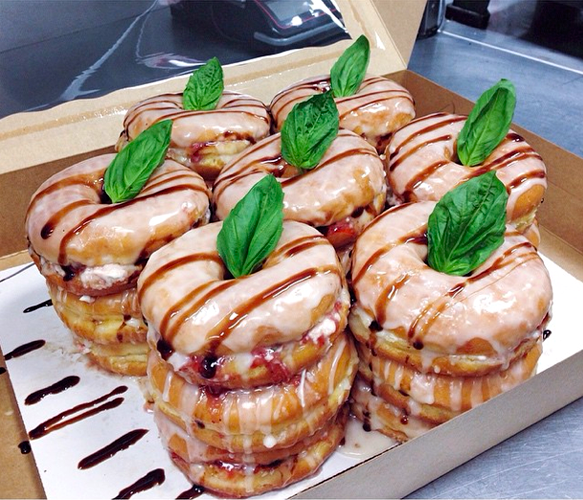 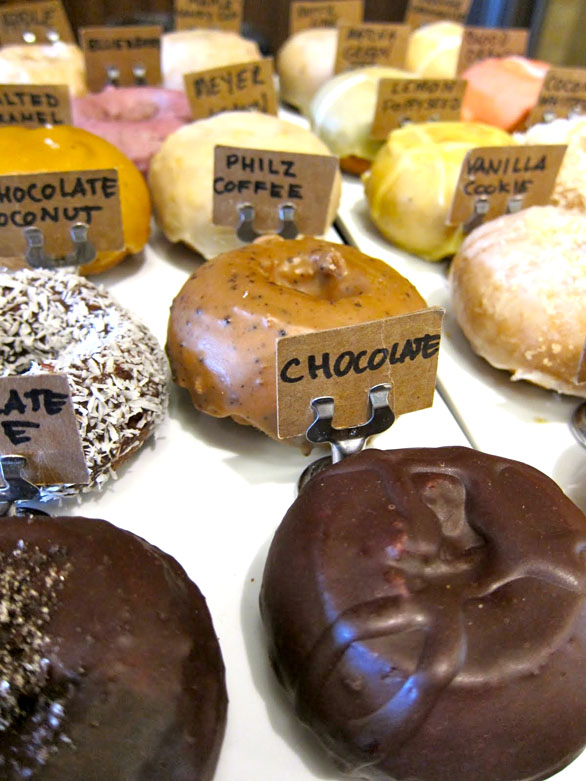 Oakland’s Pepples Organic Donuts
Vegans in Northern California get their doughnut fix from the wildly popular Pepples. Though they specialize in classic flavors like Chocolate and Cinnamon Sugar, their daily creations up the doughnut game with concoctions like White Chocolate Coconut Curry and Matcha Green Tea.
Customers are loving: Salted Caramel strikes the perfect balance between salty and sweet
Don’t miss: Candy Cap with a mushroom glaze