Once upon a time, in a land not so far away, communicating with friends and family from a distance involved picking up the telephone and calling them. Before that, letters were the primary source of contact. Now, obviously, things are very different. We can all communicate with friends via instant messaging apps 24/7. But sometimes, you don’t even need to say anything at all to let someone know you’re thinking of them. These days, you can just send a meme.

Defined as an image, video, or piece of text that is typically funny and spread across the internet, memes have become a source of not just humor, but also connection. They help us relate to each other, and give us a few laughs along the way. Whatever the subject, and whatever the community, you can usually find more than one meme page on social media that binds people together. And vegans are no exception.

Memes help the world’s growing community of vegans (it’s estimated there are roughly 8 million globally) to bond and spread information, but also call out some of the world’s destructive industries, while still maintaining an air of humor. Here are some of our favorites on the internet right now. But first, for those who may be unsure, what is a vegan, anyway?

What is a vegan, anyway?

To put it simply, a vegan is someone who doesn’t eat, wear, or use anything that comes from an animal. So this means no meat, no dairy, no honey, no eggs, no fur coats, no leather, no wool … you get the picture.

According to The Vegan Society’s official definition, veganism is “a philosophy and way of living which seeks to exclude—as far as is possible and practicable—all forms of exploitation of, and cruelty to, animals for food, clothing, or any other purpose … And by extension, promotes the development and use of animal-free alternatives for the benefit of animals, humans, and the environment.”

People can follow a vegan lifestyle for many reasons. For most, it’s about reducing animal cruelty, as billions of animals die in the food system every year. But many people also care about reducing harm to the environment too. Animal agriculture is detrimental to the planet. It drives deforestation and water pollution, and emits 14.5 percent of global emissions. Some also choose to follow an animal-free diet for their health. But this is not always the same as going vegan. A person who eats only plant-based foods for their nutritional value may still opt to wear leather, for example.

Why vegan memes are so funny

Vegan memes are funny for the same reason that all memes are funny. They help us to look at situations that regularly occur in our everyday lives and find humor in them. For a vegan, it’s annoying and disappointing when you head to a restaurant with friends and the only option you can eat is some steamed vegetables. But by pairing popular culture moments or amusing images with a witty caption, memes make irritating situations like this entertaining. And, as the average meme is shared thousands of times, they also make us feel less alone and help us connect with other people who have the same struggles and anxieties.

According to YPulse, 75 percent of people aged 13 to 36 regularly share memes. More than half send them once a week, while 30 percent send them once a day. If you’re a meme-lover, we’ve rounded up some of the funniest and most relatable for you to send to your fellow vegans. Happy sharing!

You know the feeling. You find a tasty-looking snack that you’re sure must be vegan because there’s no reason for meat or dairy ingredients to be added. And then you check the back only to find the recipe contains 1 percent milk powder. Why?! 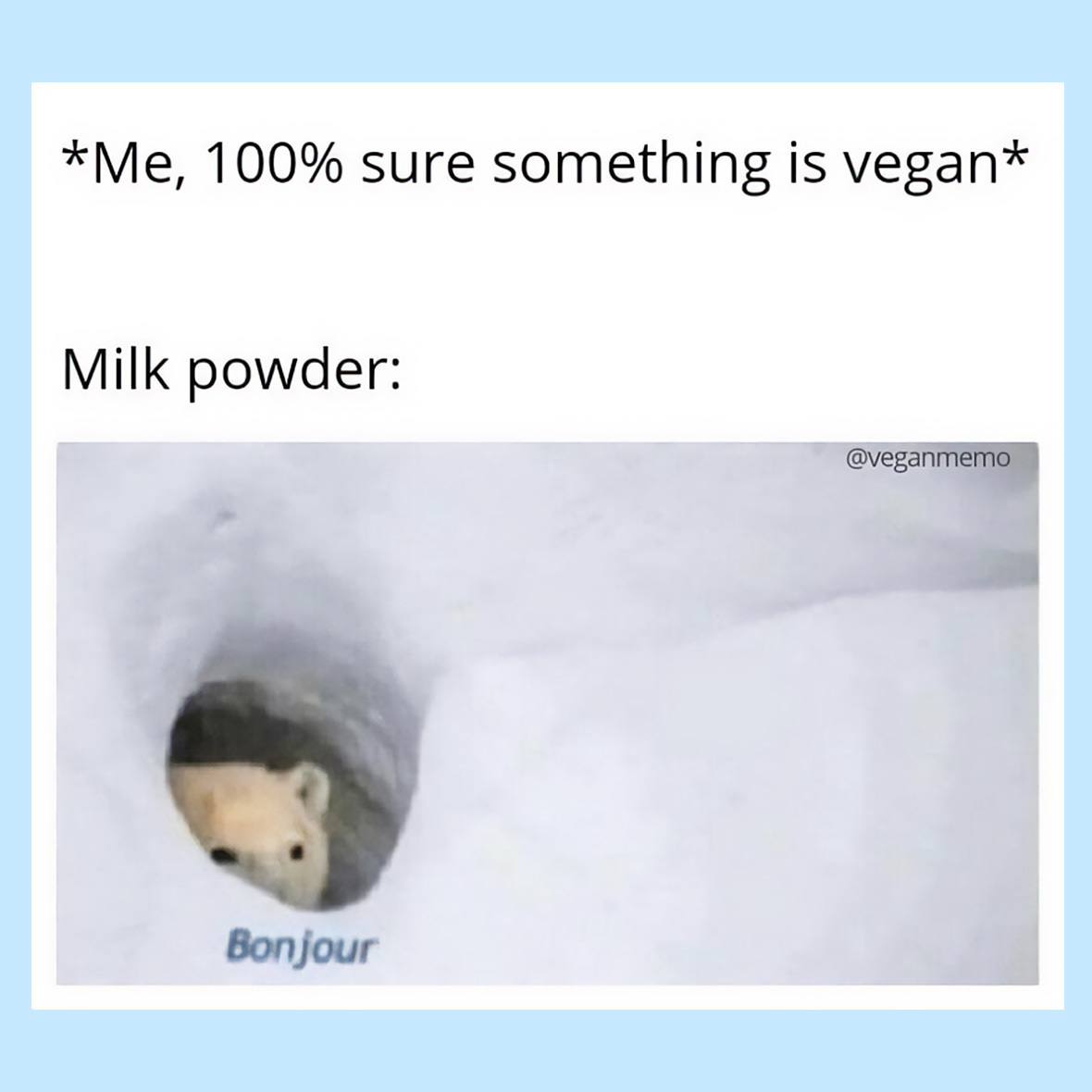 2 Ordering too much vegan pizza

Vegetables are nutritious and delicious, don’t get us wrong. But when you can’t be bothered to cook, there’s only one solution: vegan pizza. Sorry, week-old brocolli. Looks like tonight is just not your night. Again. 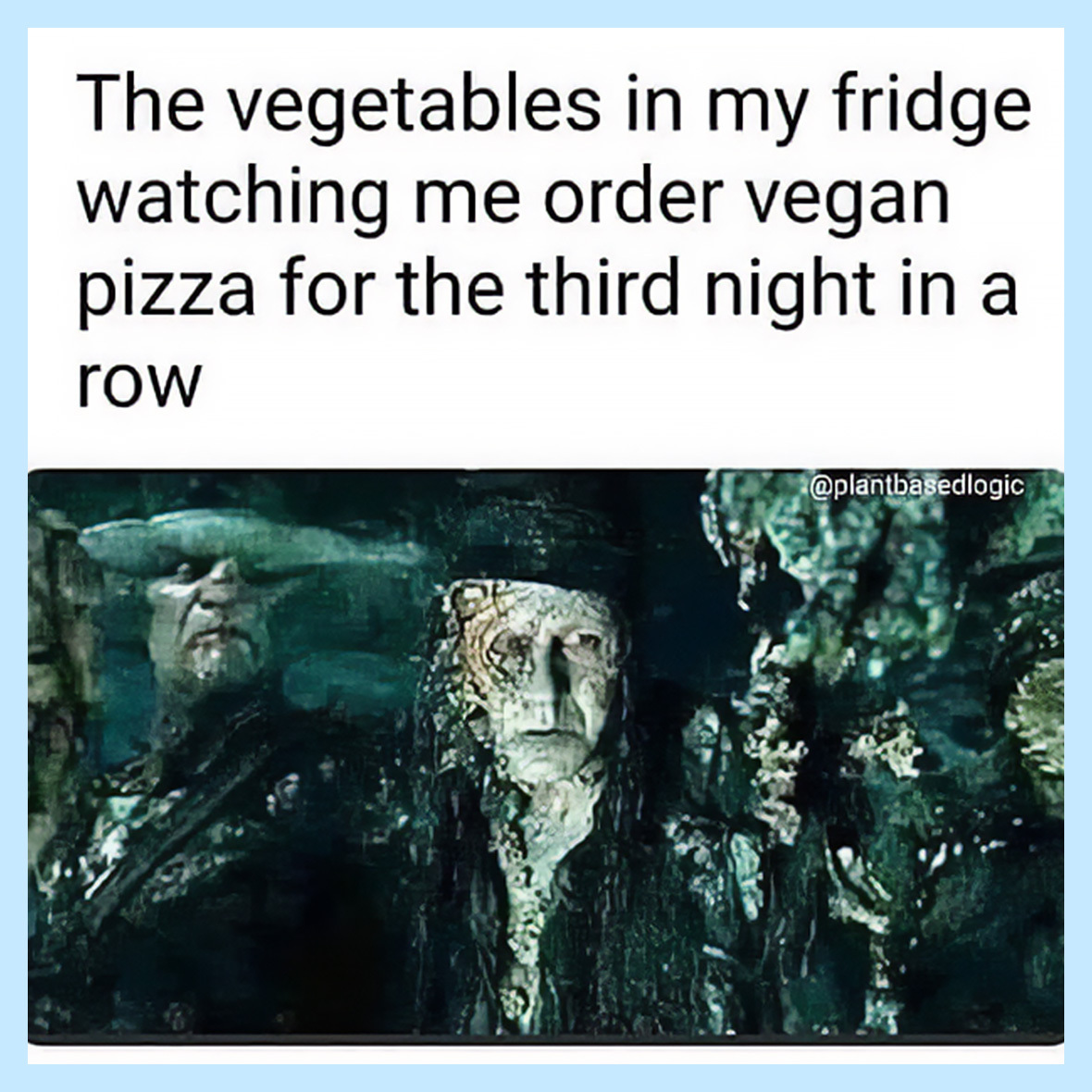 If you’re heading out with non-vegan pals, there’s always a risk they’ll pick a place with no designated vegan options. But don’t panic. As long as there are fries, salad, and a tasty (vegan) beer, you’ll get by. 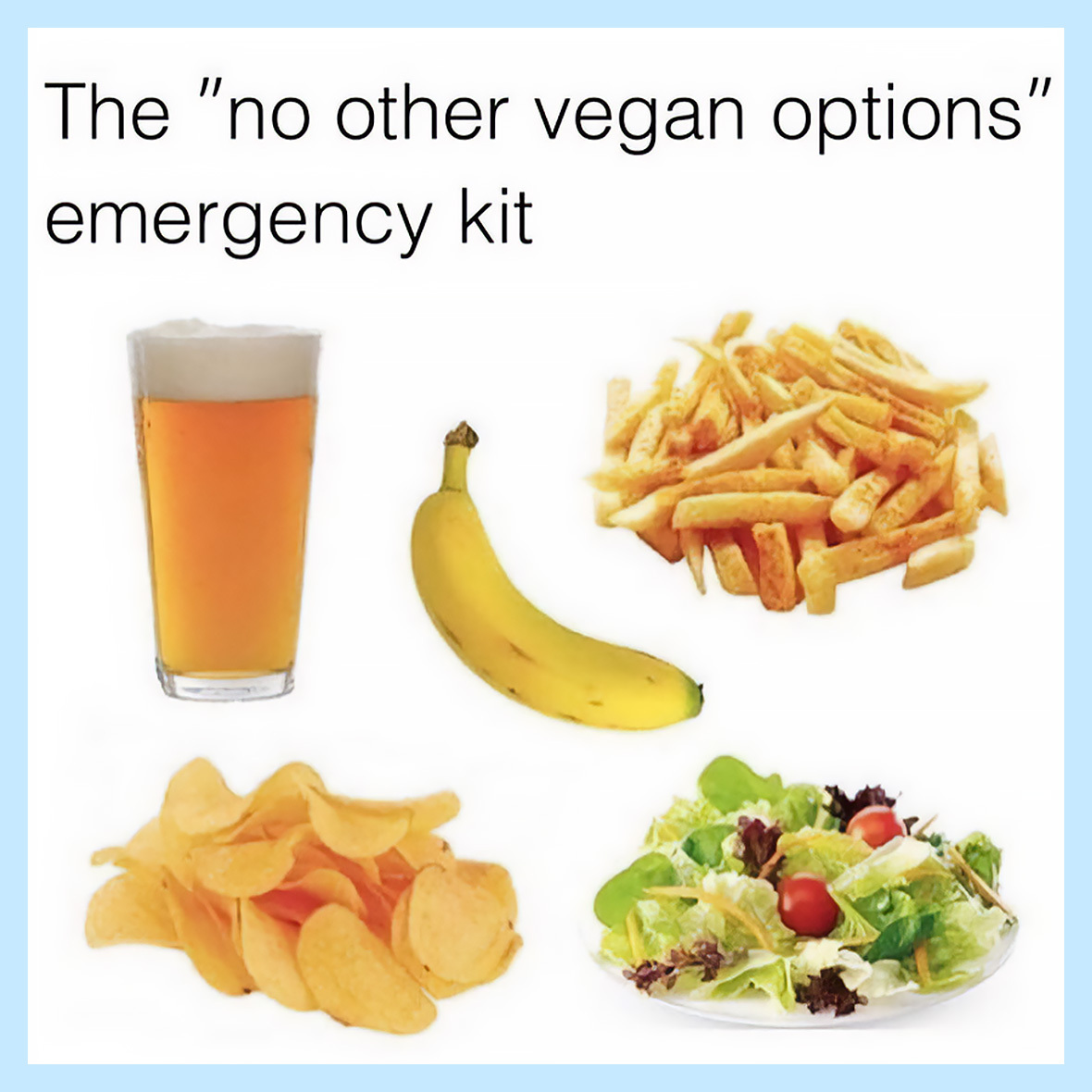 4 The death of the dairy industry

Your time is up, dairy. It’s vegan milk’s time to shine. And oat milk, undeniably, reigns supreme in the taste wars. In fact, earlier this year, one report revealed oat milk’s sales grew by 6.4 percent in the year leading up to June 12, to nearly $2.3 billion! 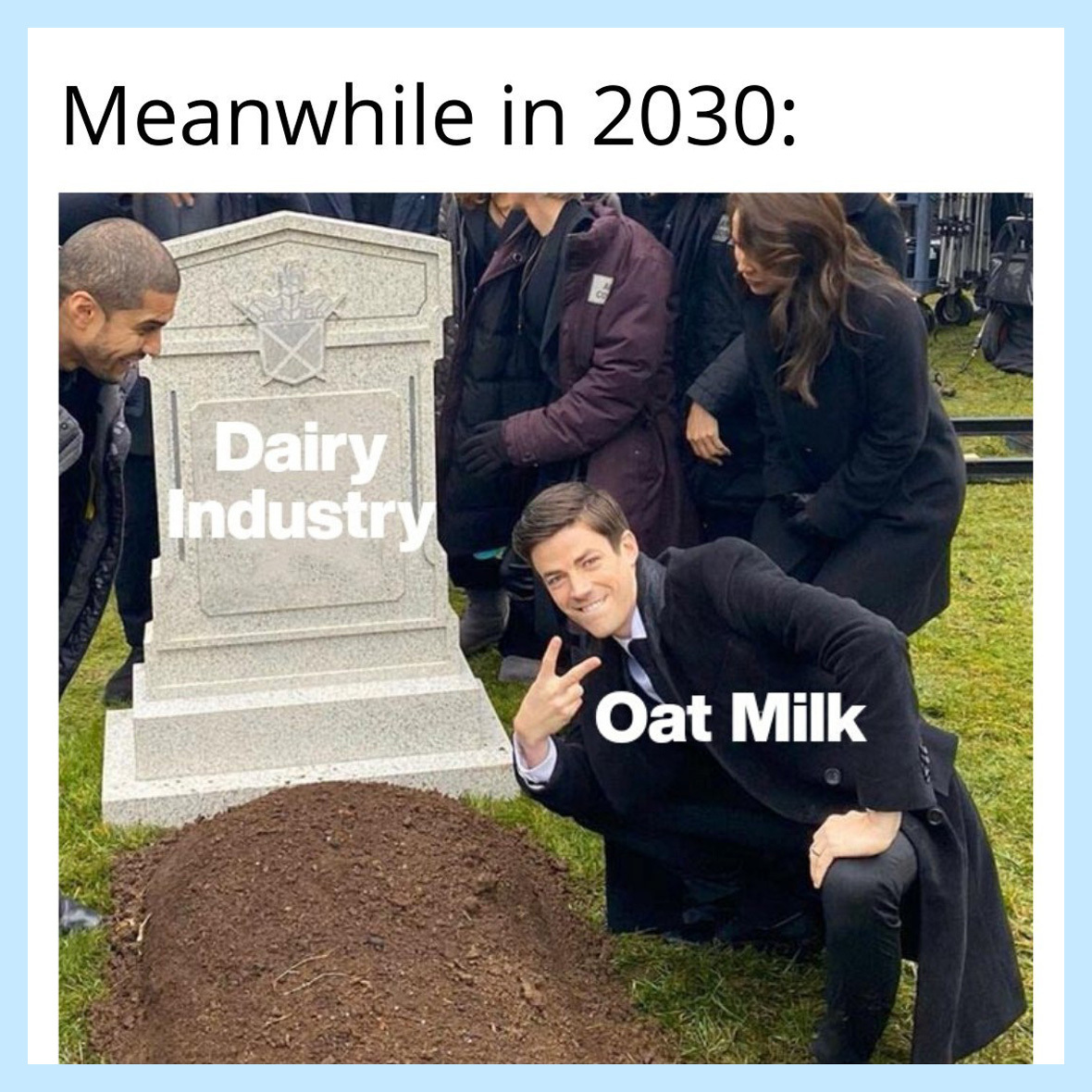 5 Cruising the vegan restaurants on vacation

Every time we book a vacation, we immediately research the best vegan restaurants in town. It would be devastating to miss out. Eiffel tower, who? (If this is *literally* you right now, our travel guides have you covered.) 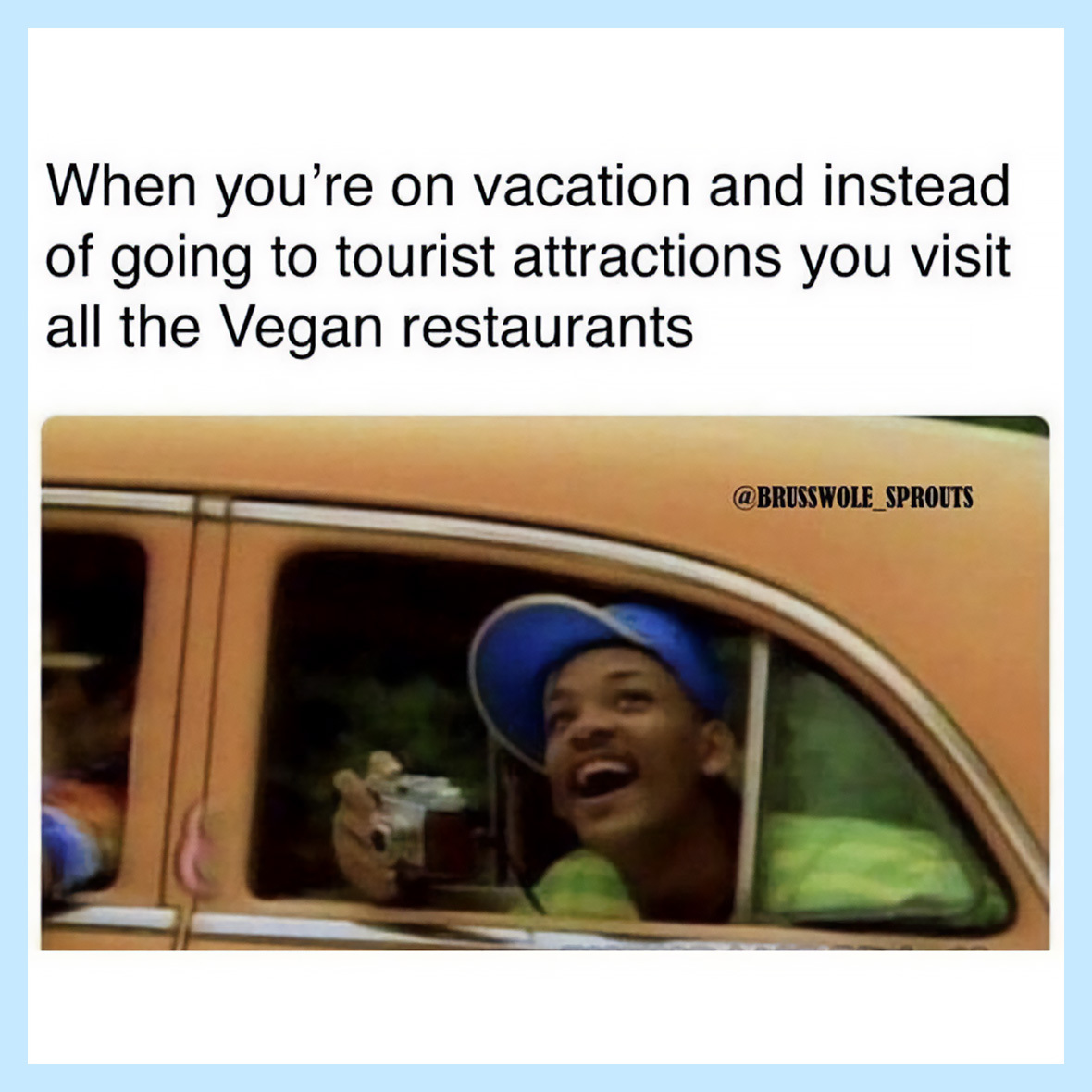 When you’re standing in line at the grocery store, and you hear the people in front of you discussing their vegan finds, you have to stay quiet, but really you just want to scream “be my friends!” 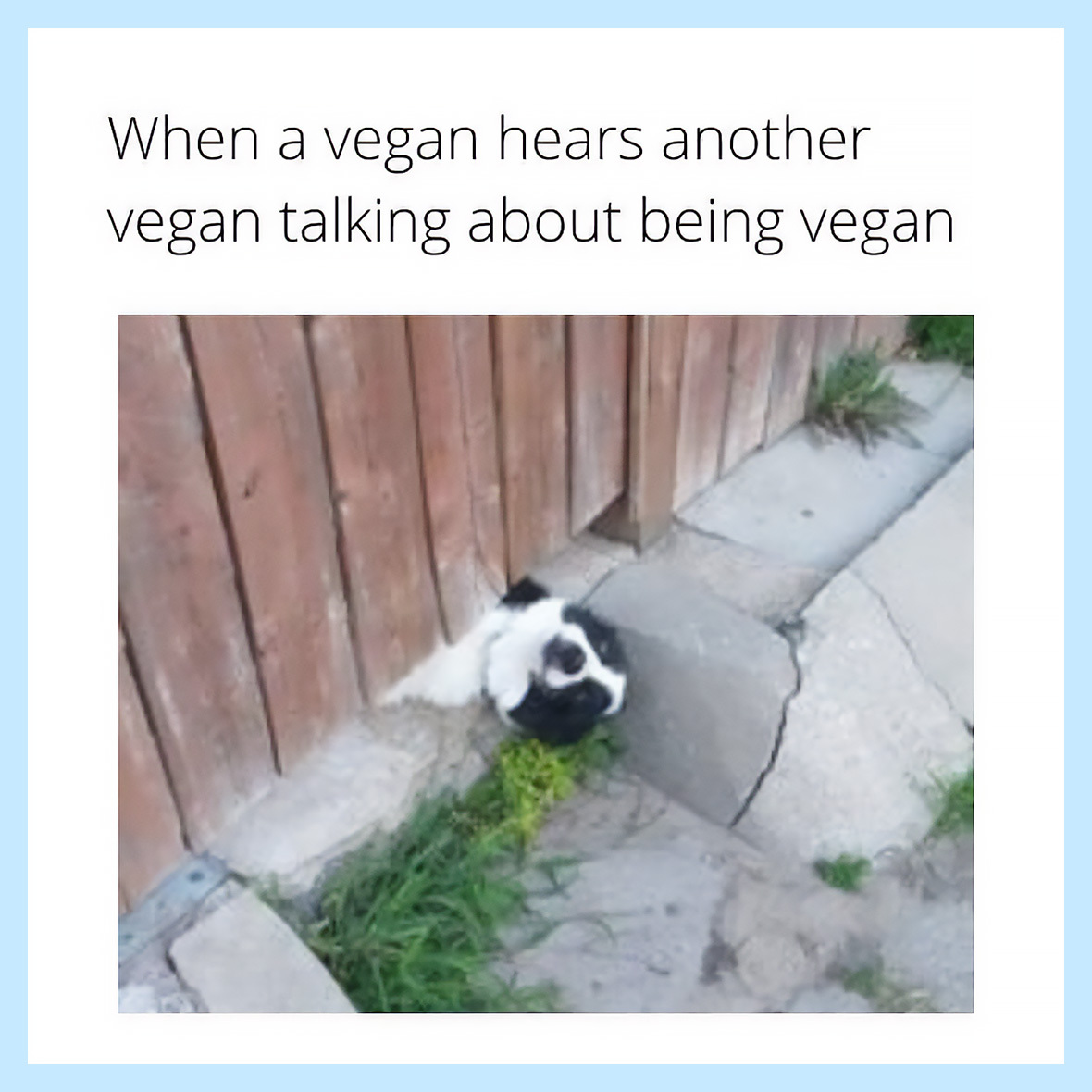 If you’re facing a round of questioning at the dinner table, there’s only one solution: honesty or run. And it would be a shame to waste food. “Sorry Aunt Margaret, that really is how milk is produced on factory farms.” 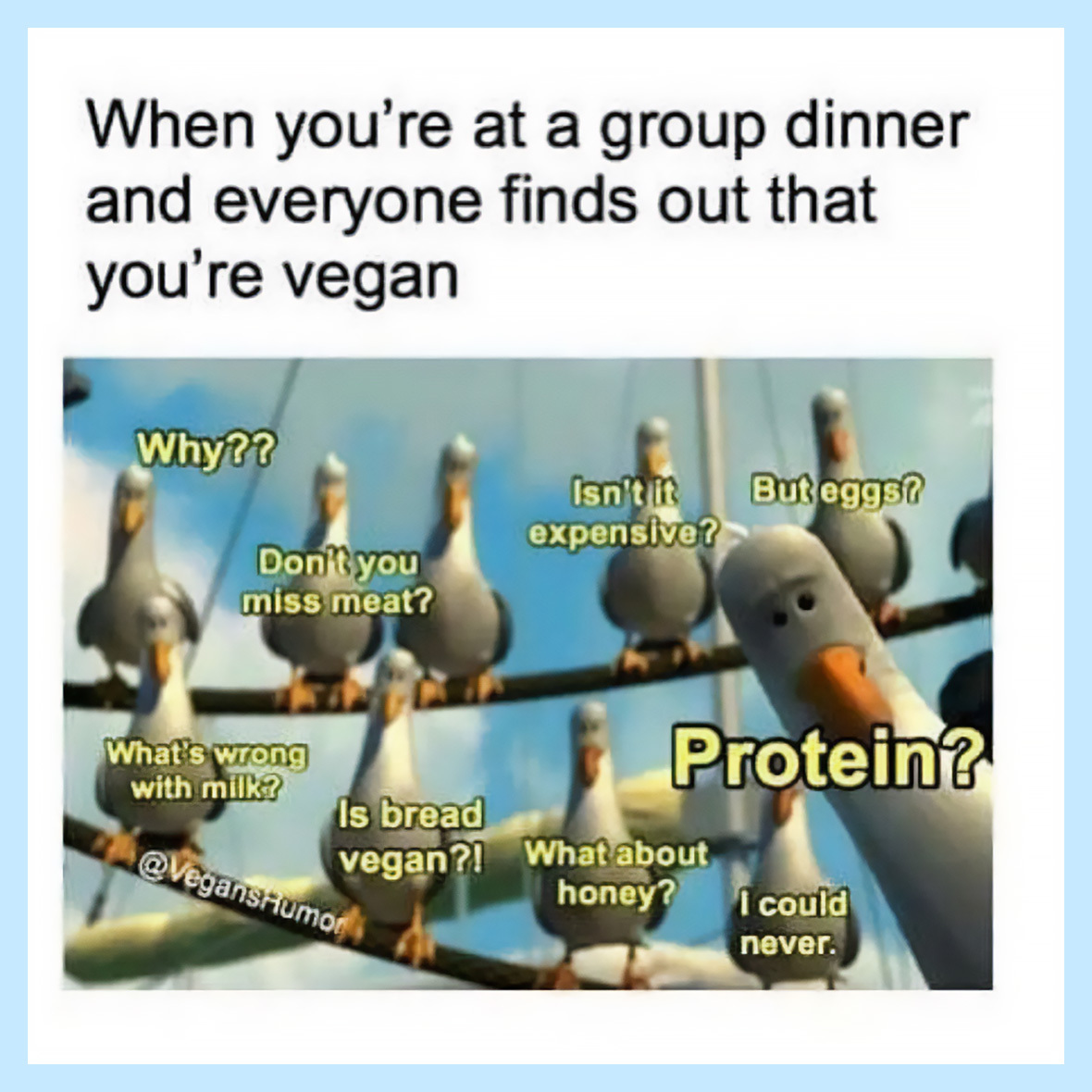 8 A chicken for dinner

Chickens are intelligent, empathetic, and sentient beings. It makes no sense to eat them. But that’s not to say you can’t invite them over for a civilized meal. More corn all round. 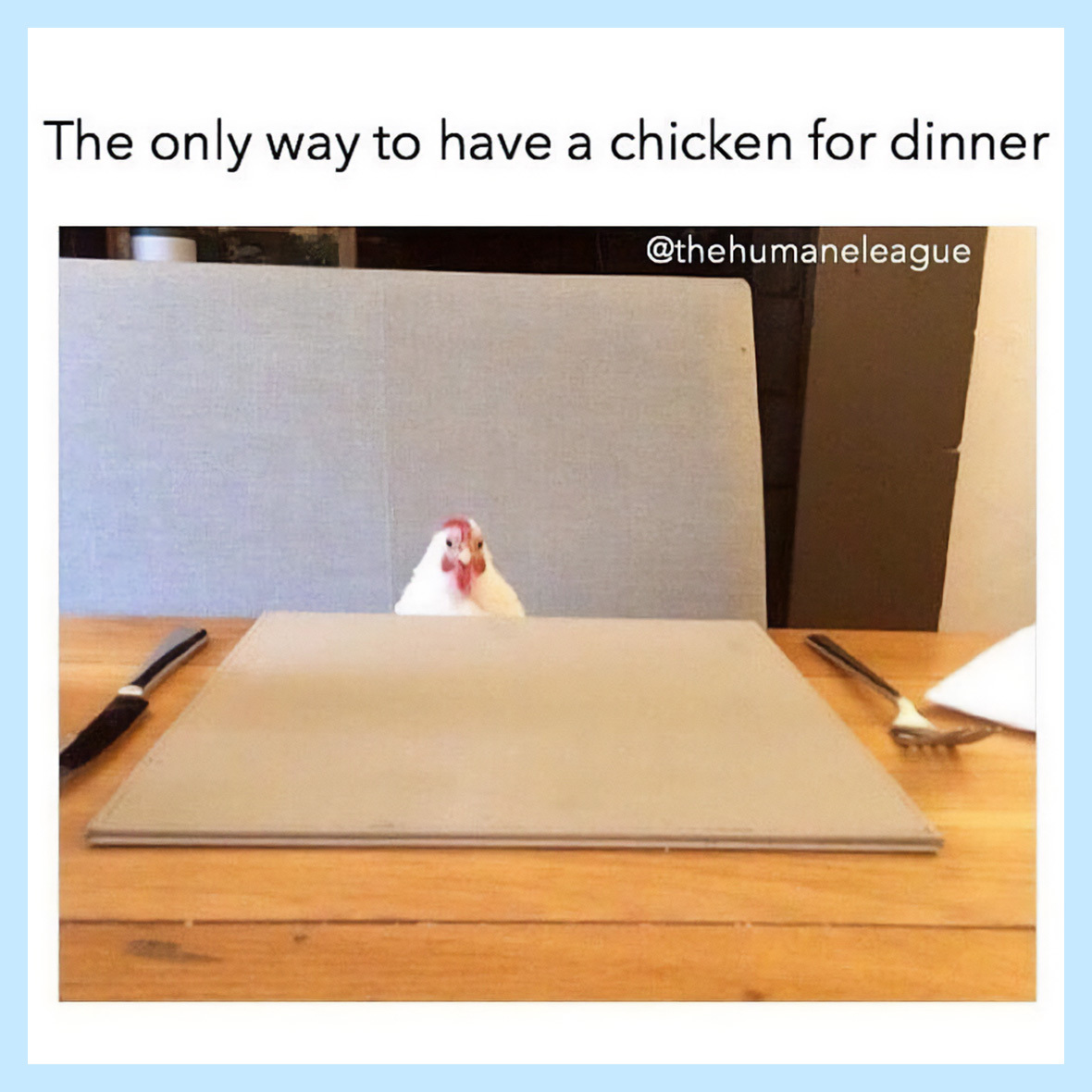 9 “I have never eaten vegan food before”

This one is always frustrating. You know those fruits, salads, soups, veggies, fries, and potato chips most of us all buy on a regular basis, regardless of ethics? Yep, mostly vegan! 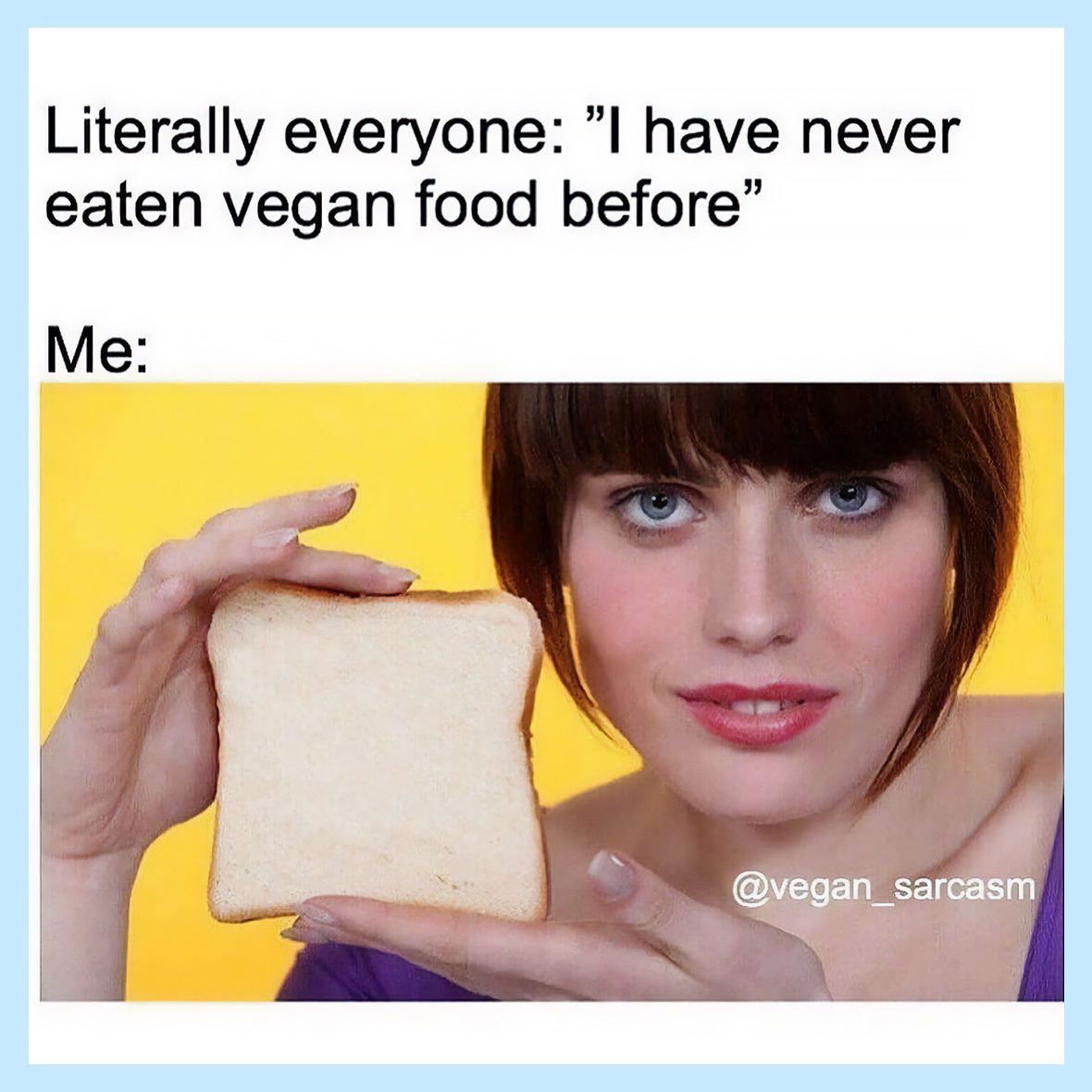 10 The reality of the egg industry

It’s certainly not an appetizing fact, but it is true. Male chicks are of no use to the egg industry, because they don’t have female reproductive systems. As a result, billions are slaughtered every year. 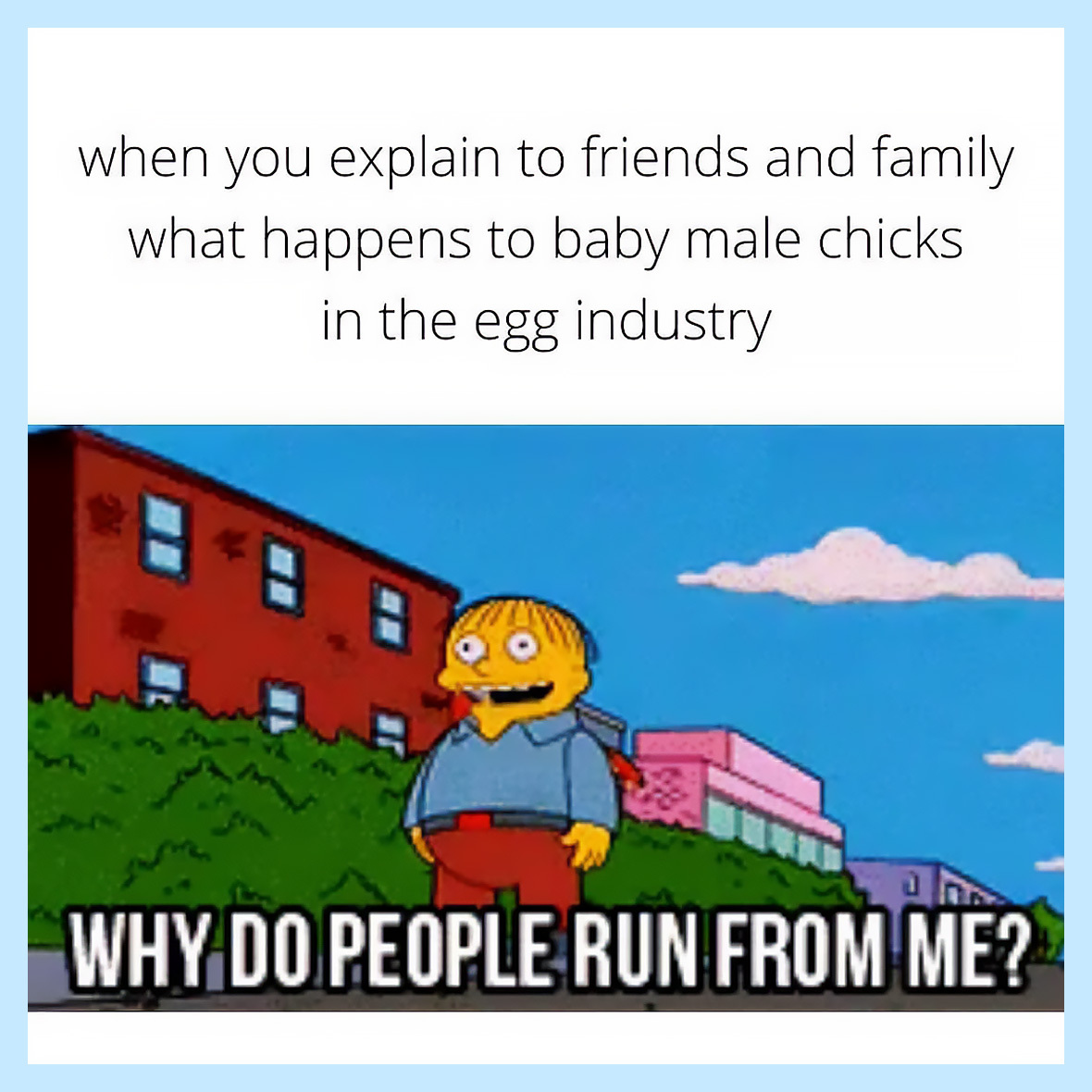 It really is brilliant that so many coffee shops now offer vegan milk alternatives. But until they get rid of cow’s milk too, we’ll be watching like a hawk while our coffee order gets made. 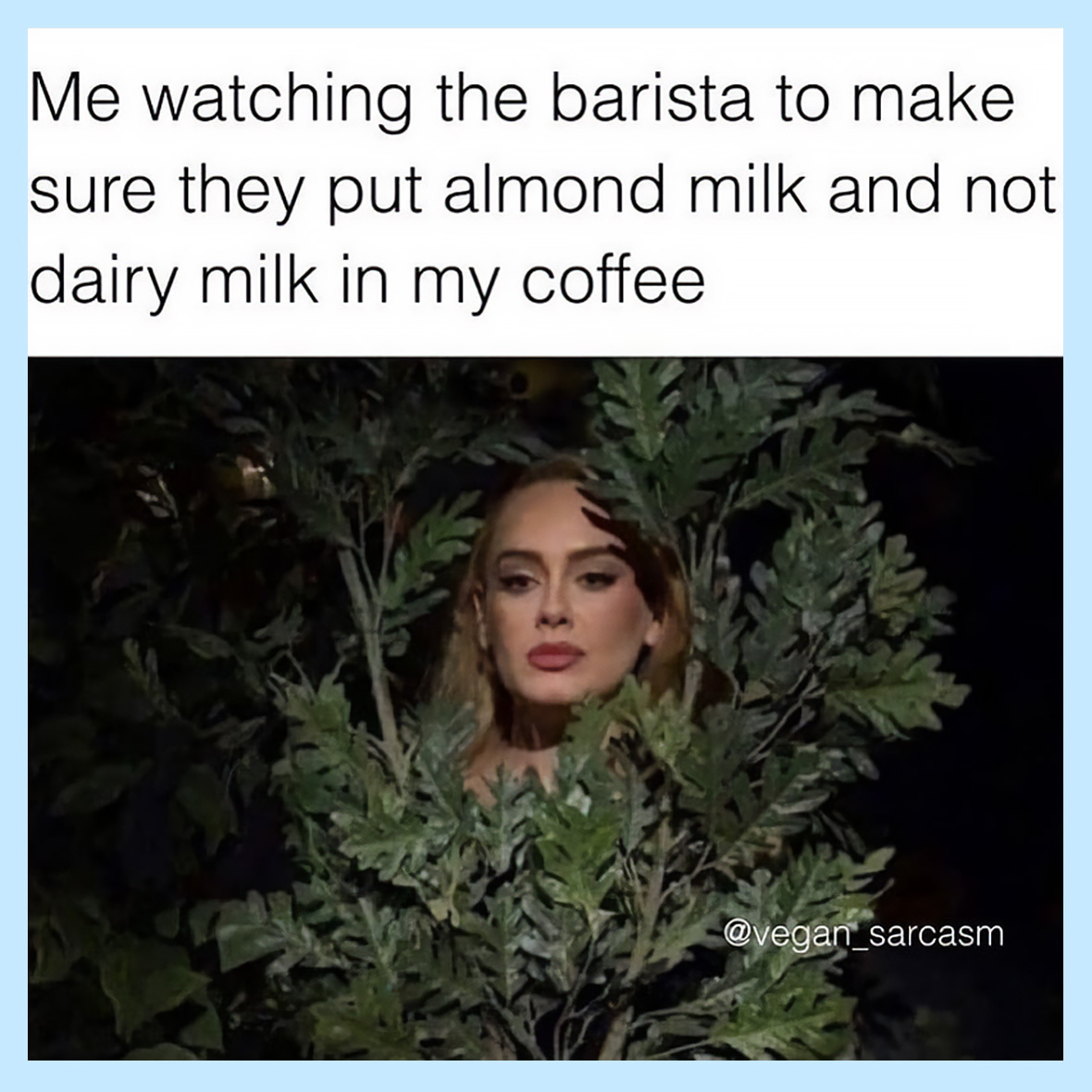 12 Dipping your finger in the hummus

Hummus is the ultimate vegan snack. It’s creamy, it’s delicious, and we cannot, and will not, resist dipping our fingers into it. Sorry, Mom. 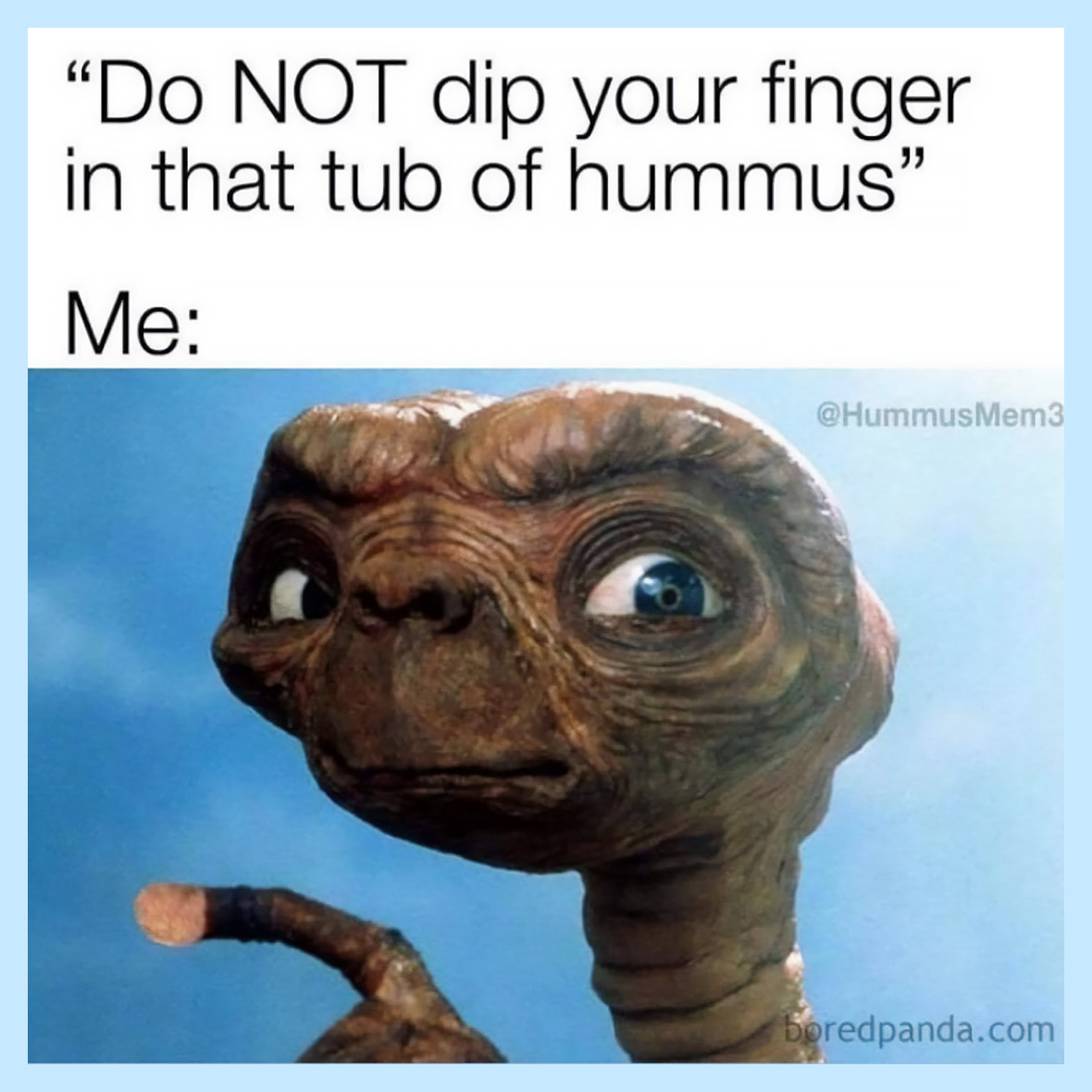 Onions are the most rebellious vegetable in the game. But they taste good, so we keep chopping them up anyway, no matter how much they try to sabotage our eyes. 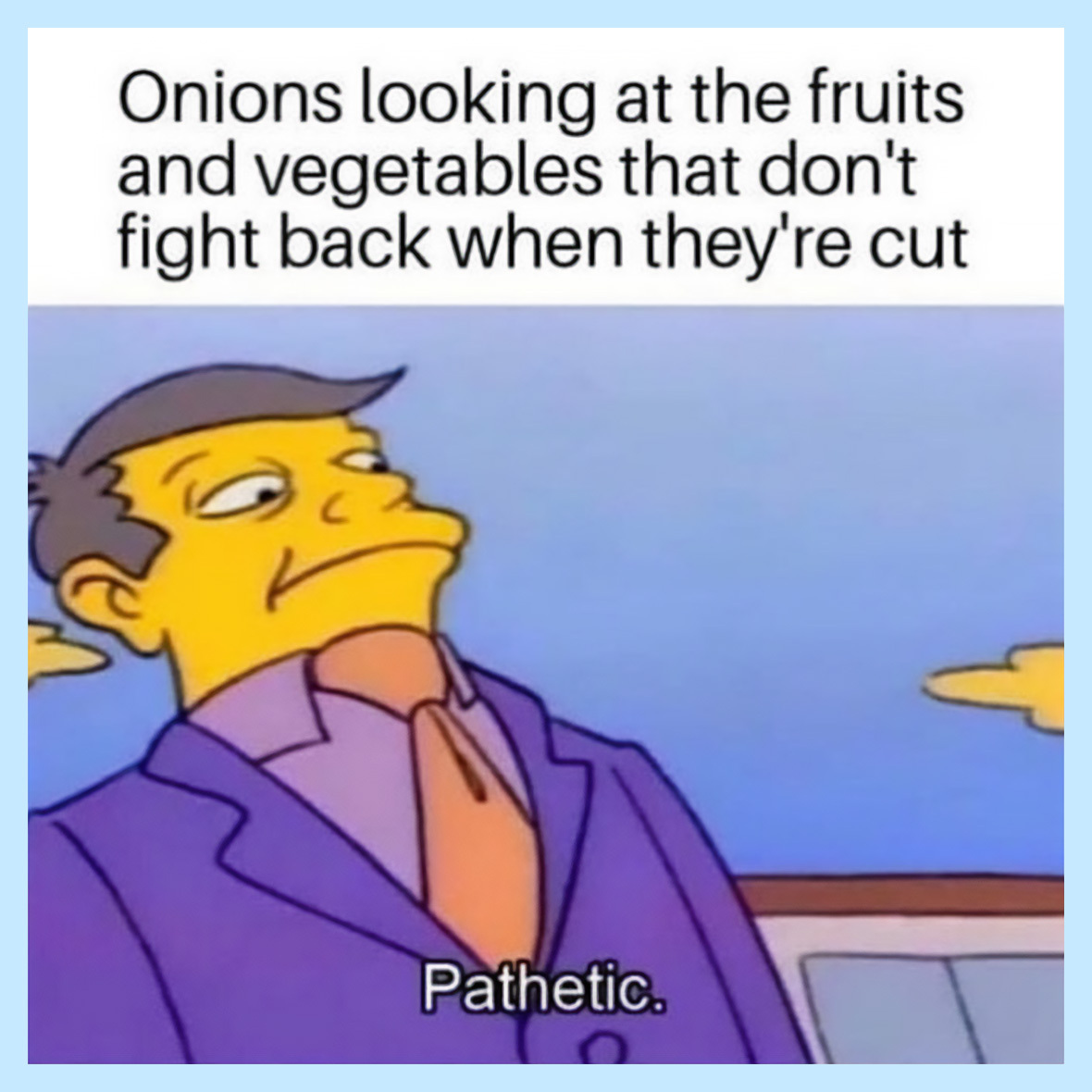 Nothing beats the feeling of pride that washes over you when a loved one starts regularly making a vegan swap in their diet. It always makes us want to get the camera out and start channeling 2007 Kris Jenner. 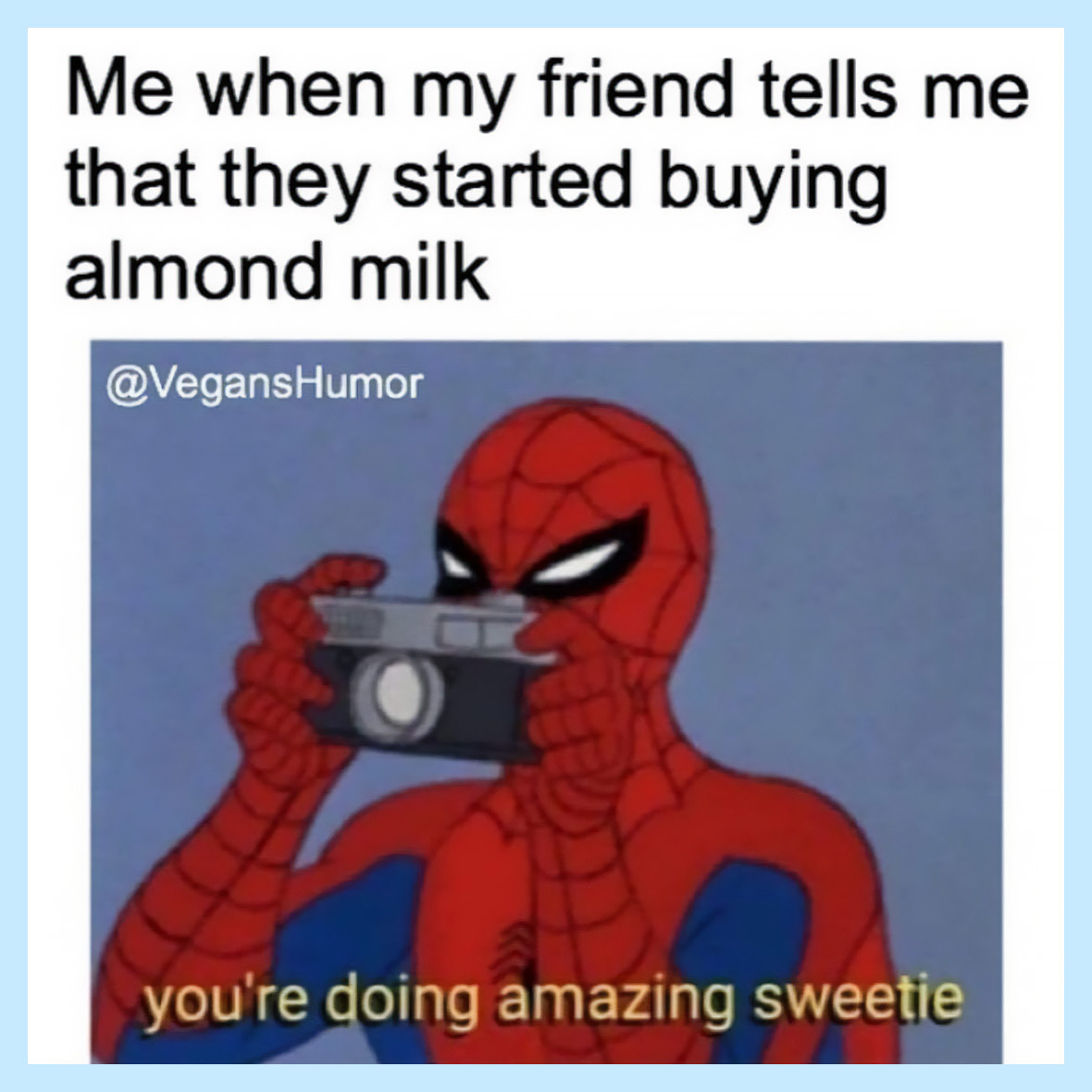 15 Trying to cook the right amount of spinach

Spinach may not rebel by making our eyes water, but it definitely tricks us into thinking we’ve made enough for dinner, when we never, ever have. 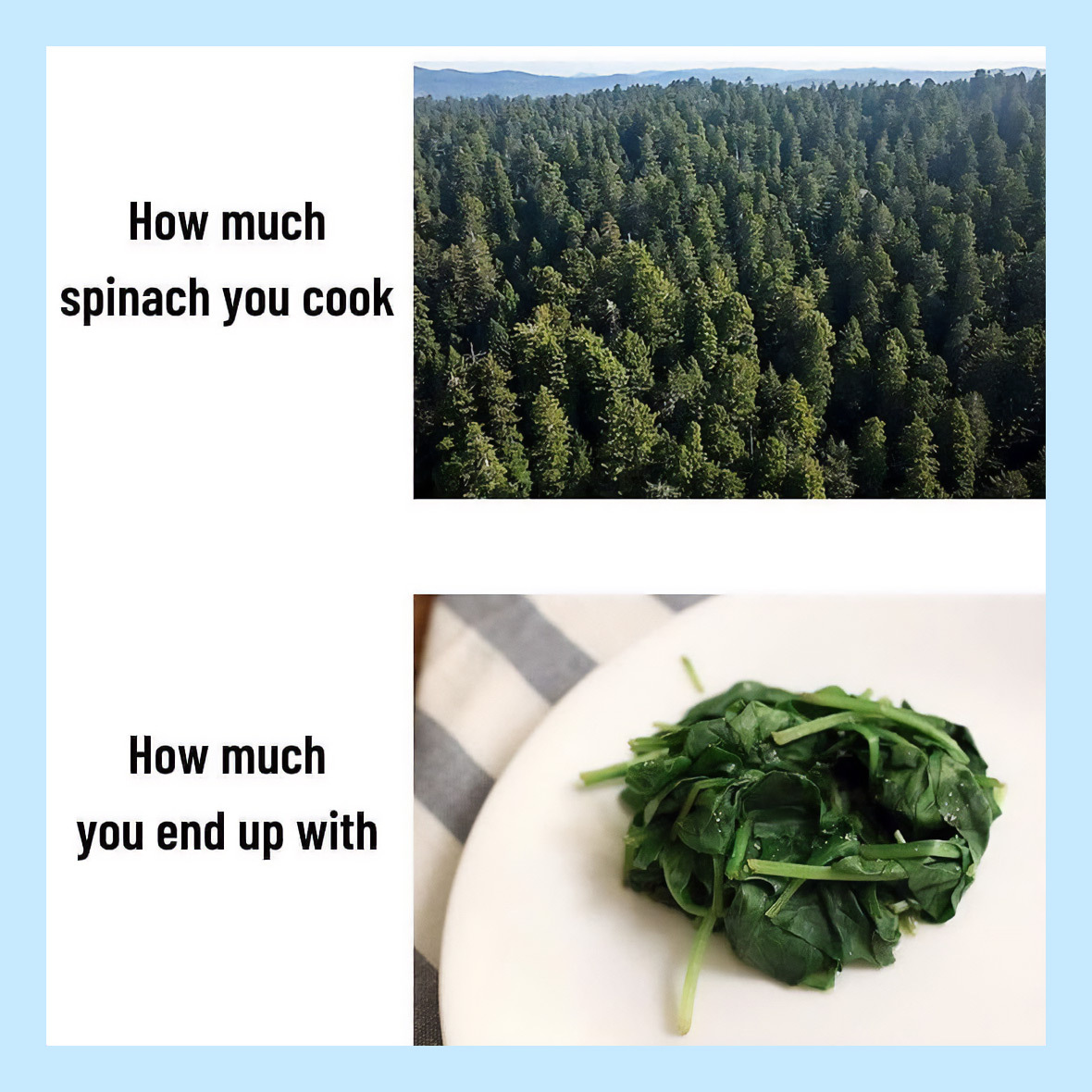 And finally, is there another love like the love you have for your favorite vegan restaurant? We’ll answer for you: there isn’t. We’ll take one of everything on the menu, please. And we’ll be back tomorrow to do it all again. 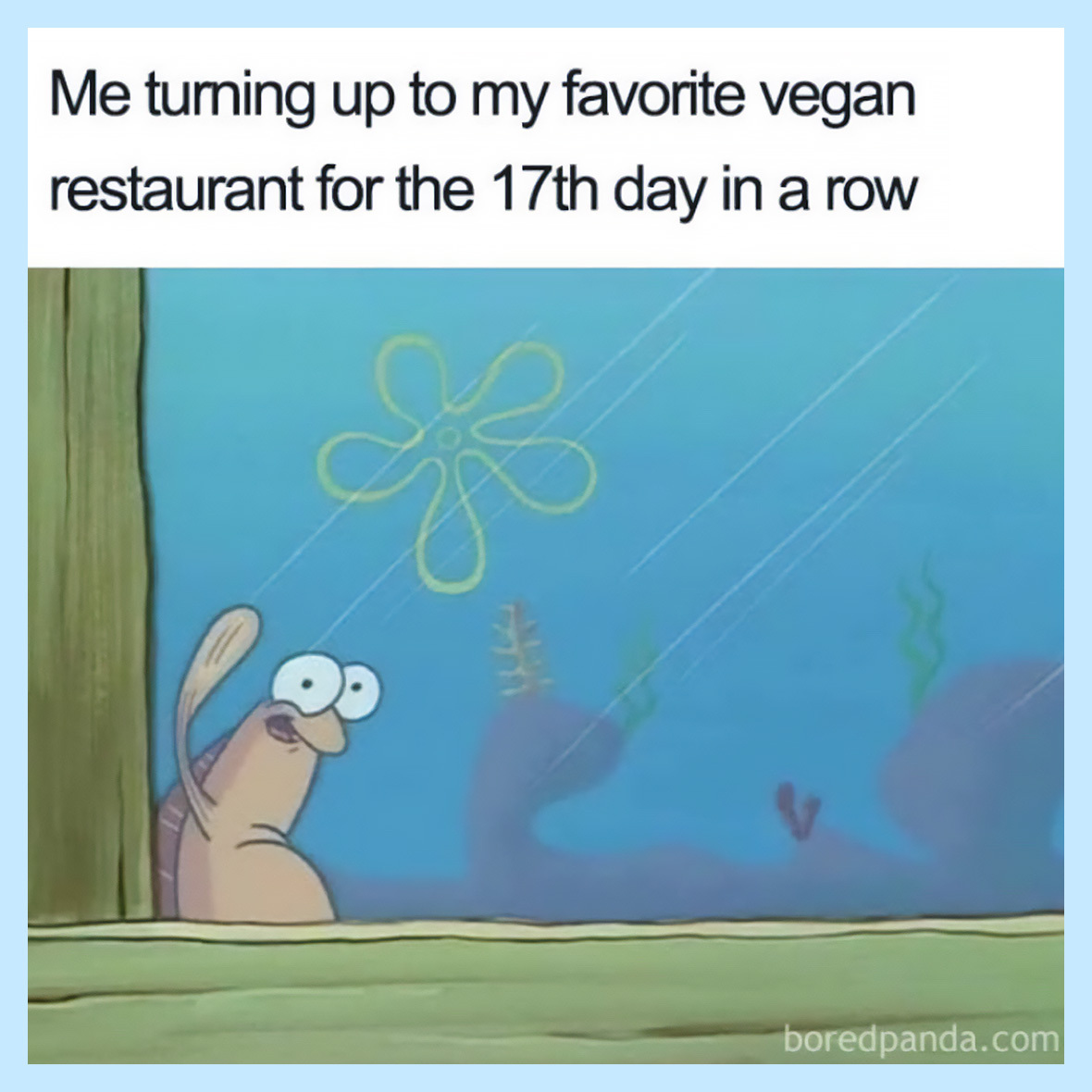