Visiting foreign countries without extensive knowledge on local vegan options can be intimidating. While researching restaurants and markets online can help assuage fears of overseas starvation, listings can be unreliable and inconvenient, or the food can be too pricey for a traveler on a budget. Luckily, our guide to vegan food around the world—all available for a buck or two on many street corners—proves there’s no scarcity of delicious, interesting vegan food away from home. 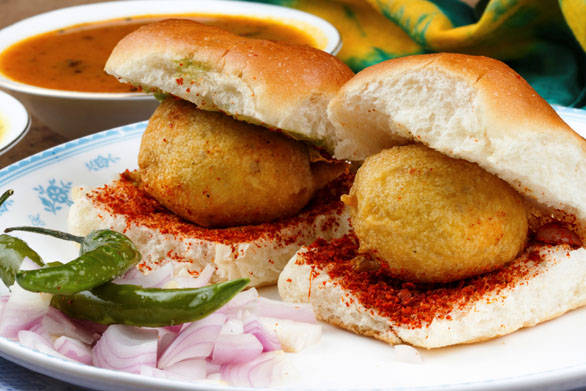 The country: India
The street food: Vada Pav
The price: About 15¢
Vada pav, sometimes called an “Indian burger,” is one of Mumbai’s most popular street foods. With more than 50,000 stalls offering vada pav in the city, you’ll have no problem finding this iconic fast food, or the vendor whom you think does it best. Vada refers to the fried potato fritter stuffed into pav, a split bread bun. The sandwich is then seasoned with fragrant chillies, chaat masala, and turmeric, and topped with peanut-garlic chutney.
Runners-up: Deep-fried pani puri (puffed bread filled with chickpeas and spiced mashed potato), bhel puri (puffed rice salad with tamarind sauce), and samosas 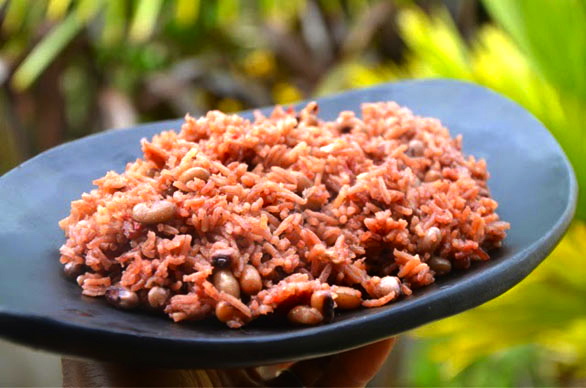 The country: Ghana
The street food: Waakye with Spiced Plantains, Avocado, and Cassava
The price: 50¢–$1, depending on your toppings
Walk down nearly any street in Ghana after sunrise, and you’ll be sure to find stalls selling towering bowls of rice and beans, and, more often than not, a long line of men fueling up for their breakfast. Waakye—rice and beans cooked with sorghum leaves to provide a sticky texture—is the perfect stick-to-your-ribs breakfast that locals love for its delicious taste and equally tantalizing price. Though the spicy shito sauce contains dried fish, we like ours piled high with crispy spiced plantains, fresh-cut avocado, and cassava shavings called gari. Get it wrapped in a banana leaf to go or eat it at the stall while making new friends.
Runner-up: Roasted yams and plantains smothered in groundnut paste 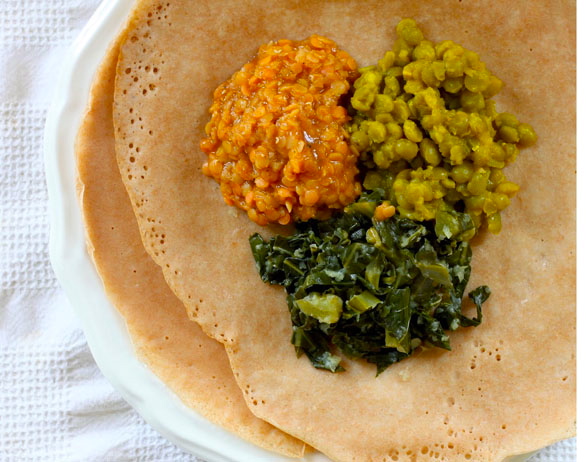 The country: Ethiopia
The street food: Misir Wot
The price: $3
While found more often in roadside restaurants than street carts, misir wot—a spicy lentil stew served with Ethiopia’s signature injera bread—is not to be missed. Red lentils, onions, and a local Berbere mix with cardamom, fenugreek, cinnamon, and a host of other spices are simmered to make a creamy, dairy-free stew. Vegan dishes are especially easy to find on Wednesdays and Fridays in Ethiopia as these are special days in the Ethiopian Orthodox faith.
Runner-up: Ambasha, a lesser-known traditional bread that is sweet and cake-like, and goes perfectly with a cup of dark Ethiopian buna coffee 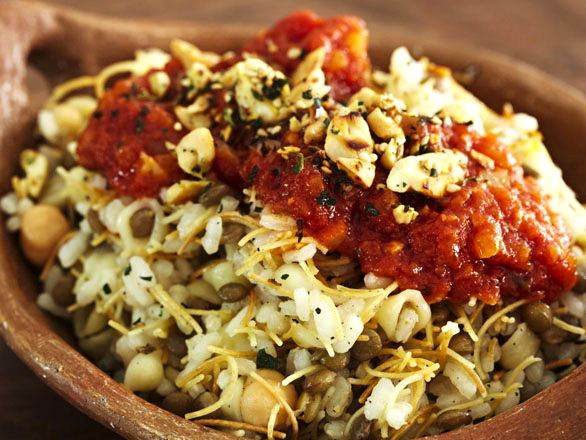 The country: Egypt
The street food: Koshari and Shatta Hot Sauce
The price: About 65¢
Koshari, the national dish of Egypt, is served on virtually every street corner in the African country, as well as at restaurants and local homes. Each morning, towns become flooded with beloved “Koshari men,” or street vendors, cacophonously clanging metal spoons in bowls as they mix rice, macaroni, and lentils into a single concoction. From there, the traditionally vegetarian meal is dressed with spicy shatta sauce—made with vinegar, garlic, chili peppers, and cilantro—and topped with garbanzo beans and crispy fried onions.
Runners-up: Stuffed grape leaves (dolma kadhaba), falafel, and fresh tahini 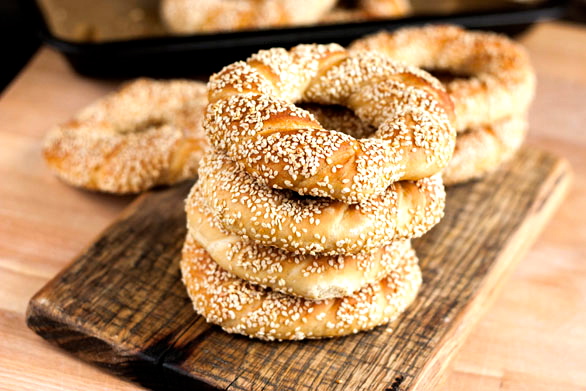 The country: Greece
The street food: Koulouri
The price: 50¢
An Athenian specialty, these sesame-crusted bread rings are not only one of Greece’s most popular breakfast foods but also one of the country’s most popular street foods. Almost every street corner and bakery sells koulouri, which similar to bagels are crusty on the outside and chewy in the center. Enjoy them halved and smothered in sweet jam for breakfast or go savory with Kalamata olives for a light lunch. Other delicious fillings include apple and tomato.
Runners-up: Roasted chestnuts and corn on the cob sprinkled with sea salt 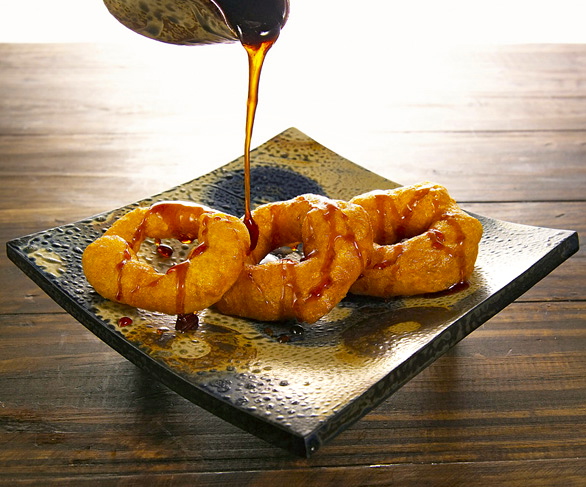 The country: Peru
The street food: Picarones
The price: 65¢
While it seems that almost every country boasts a signature fried dough, the Afro-Peruvian picarones dating back to Peru’s viceroyalty times are truly one-of-a-kind. Don’t worry about a flour-and-egg base: these doughnuts are made with a bright-orange local squash and sweet potato mashed into a purée—and fermented, kneaded into rings, and fried in a pan of bubbling oil. It’s then drenched in a molasses-like chancaca syrup spiced with anise and is best eaten when piping hot.
Runners-up: Spiced, sticky, and crumbly maize tamales stuffed with chickpeas or chopped vegetables 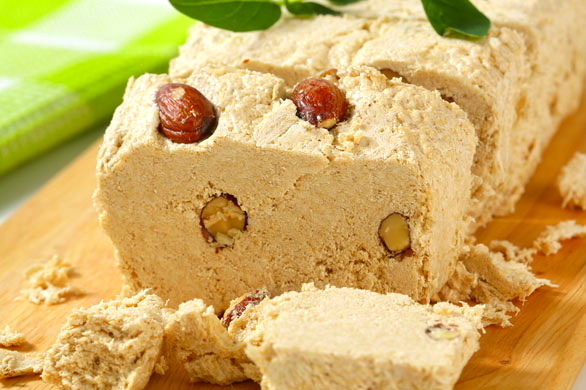 The country: Israel
The street food: Halva
The price: About $2 for 3.5 ounces
Though regional variations of halva can be found across the world, not every version of this sweet confection strikes the irresistible balance of flakiness and chewiness, smoothness and intensity that Israeli halva does. Local versions of this treat use a base of tahina (or tahini), the pure oil that pours from sesame seeds ground between two huge stone wheels. The tahina is then sweetened and shaped into cakes that are crumbly when sliced. Flavors are as diverse as coconut, pistachio, almond, Belgian chocolate, and coffee.
Runners-up: Tamarind, almond, and pomegranate juice 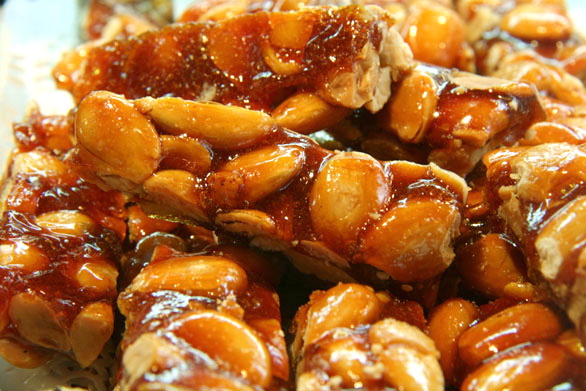 The country: Uruguay
The street food: Garrapiñadas
The price: About 10¢
The intense perfume of a nutty, caramel-like sweetness wafts throughout the streets of Montevideo, the capital of Uruguay. Follow the scent, and you will stumble upon a man toiling over a copper pot, transforming sugar into caramel for garrapiñada—roasted peanuts covered in sugar and vanilla. These nuts are crunchy, warm, sweet, and salty, and, most important, they are vegan! Garrapiñadas can be found throughout South America with some regional variations; in Buenos Aires, for example, they are sometimes made with almonds.
Runner-up: Maté, a caffeine-rich beverage sipped hot from a silver straw 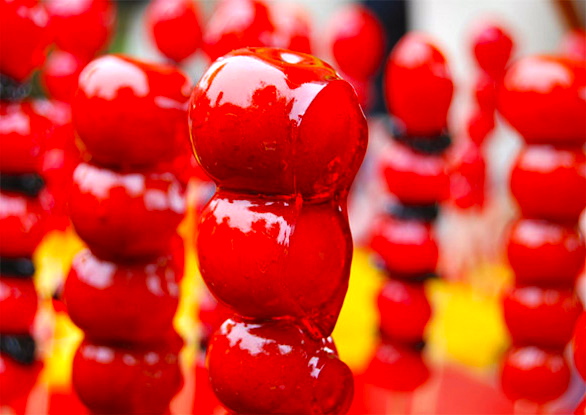 The country: China
The street food: Tanghulu
The price: 50¢–$1 depending on the fruit
Tanghulu—skewers beaded with shiny, ruby-colored fruits—look just as seductive as they taste. Hawberry, a sweet and tangy, crab apple-sized fruit with pits, is strung onto a bamboo skewer and dipped into caramelizing sugar, which hardens around the fruit and provides its signature, irresistible sheen. Some varieties are rolled in sesame seeds, or stuffed with dried haw. Though haw is the signature flavor, caramelized strawberries, kiwi slices, clementines, grapes, and even bananas are available. Tanghulu is a traditional winter snack in northern China, especially in Beijing, that can now be found on streets across the nation.
Runners-up: Stinky tofu (if you can handle the smell, you can handle the taste!), fresh-made soy milk, and fried dough sticks 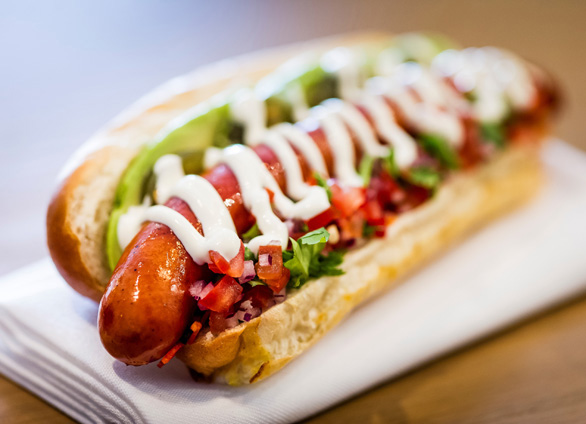 The country: Canada
The street food: Veggie Dogs
The price: $3.50
For vegans, it’s hard to think of a North American street food as classic as a grilled veggie dog covered with hot peppers and mustard. Many food carts in Toronto serve up veggie dogs grilled to perfection, with toppings ranging from olives, canned mushrooms, corn relish, and Sriracha. Oh, and did we mention you can get a side of fries with that?
Runners-up: Vegan food trucks such as the Karma ChaMEALeon that serve Buffalo Wingz and No Piggy Pulled Pork