In the not-so-distant past, the best option for Los Angeles vegans craving a chocolate doughnut was a five-hour road trip to Ronald’s Doughnuts in Las Vegas. Thankfully, that’s changed, as the demand for plant-based doughnuts in Southern California has led to a slew of vegan options showing up on trays at shops all across the region. In fact, there are now so many veg options for area vegans to enjoy that they could have a new doughnut every day for an entire month.

In celebration of National Donut Day, we scoured the LA region in search of the best vegan doughnuts. The criteria: freshness, flavor, texture, creativity, and overall profile. Here are our 10 favorites … in no particular order. 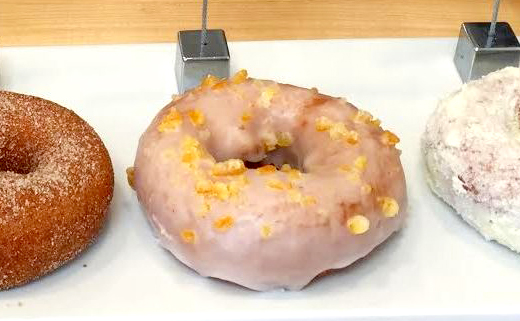 The Mimosa Cake at Blue Star Donuts
Known for its artisanal varieties in adult flavors, Portland, OR transplant Blue Star Donuts changed the LA vegan doughnut scene when it opened last fall in Venice. Blue Star replaces the expected sugar rush of frosted treats with a subtle sweetness, which is sometimes complemented with a booze-and-fruit pairing. The highlight is the Mimosa Cake, a vanilla doughnut infused with Brut champagne and a delicate glaze studded with candied orange zest. There’s also a bourbon Blueberry Cake, Orange Olive Oil, and Sugar & Spice for those who aren’t in a mimosa mood. 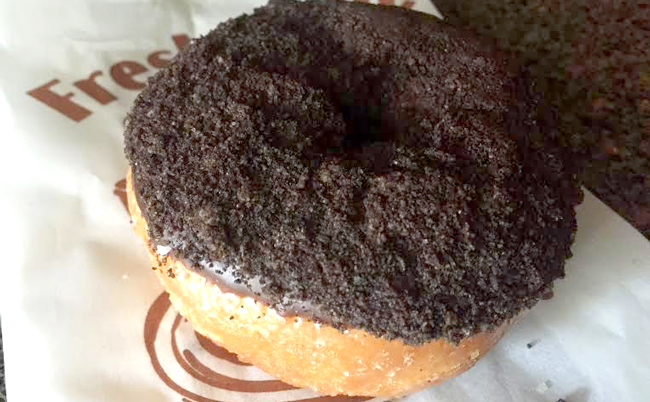 The Oreo Crumble at Colorado Donuts
Thirty-year-old mom-and-pop bakery Colorado Donuts in Eagle Rock has been producing vegan varieties for the past six months, and none of their latest creations is more delicious than the Oreo Crumble. This cookie-doughnut hybrid is a fat cake ring deep-fried, with a thick coat of sugary glaze and their signature black cookie crumbs. 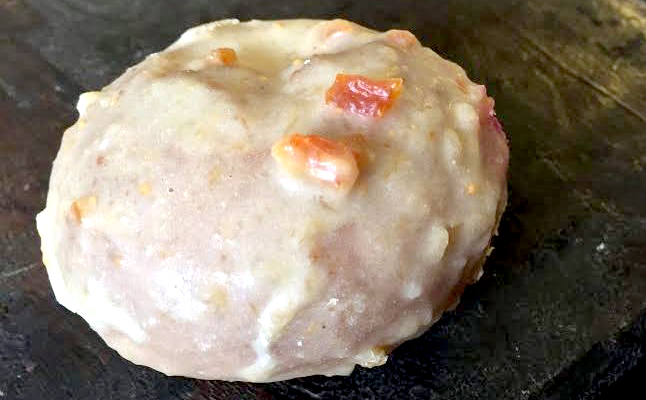 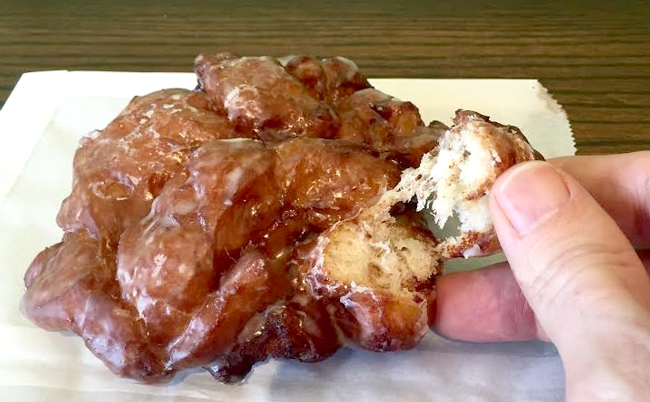 The Fritter Seems Forever at Donut Friend
DIY shop Donut Friend has played a crucial in the rise of doughnut stardom in Los Angeles thanks to varieties such as coconut bacon, Sriracha sauce, and lime cream. That said, don’t overlook the Fritter Seems Forever, a classic apple fritter with fresh mashed apple folded into dough that’s fried to a crispy golden exterior and a soft, chewy interior. Craggy bumps, with apple bits tucked into cinnamon pockets of dough, are bathed in a simple glaze that’ll quickly become your new best friend. 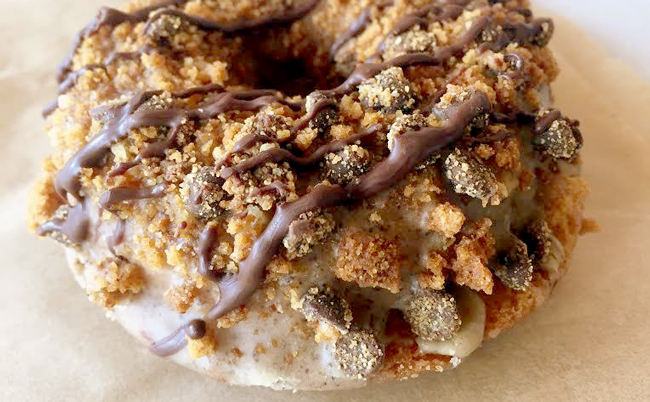 The Coffee Crunch at Erin McKenna’s Bakery LA
The New York City-based bakery has been serving allergen-sensitive, vegan, and gluten-free pastries in Larchmont Village since 2011. The Coffee Crunch is a memorable concoction with its layers of taste and texture, while the vanilla cake base wears a thick blanket of mocha glaze topped with mini-chocolate chip cookie crumbs and a chocolate drizzle. Packed with flavor, this doughnut still maintains a delicate crumb reminiscent of your favorite coffee cake. 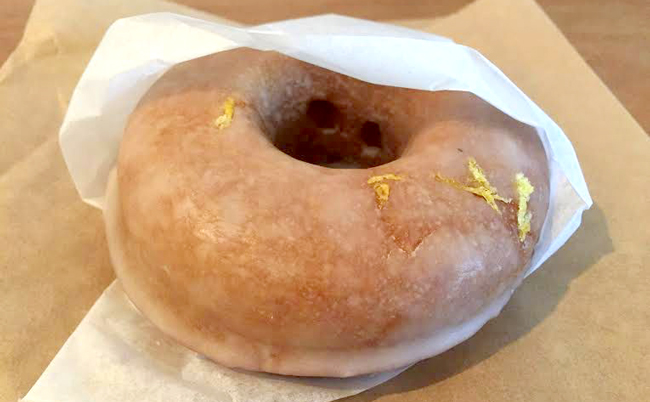 The Lemon at Fōnuts
Fōnuts, or faux doughnuts, are baked not fried and come in five vegan flavors that are also gluten-free. Although the Vanilla Latte is popular among customers, the Lemon is a standout for its fresh lemon juice folded into a batter of organic rice flour, almond meal, and applesauce. The finished Fōnut is a super moist, dense lemon cake ring with a crackling thin glaze embedded with lemon zest. 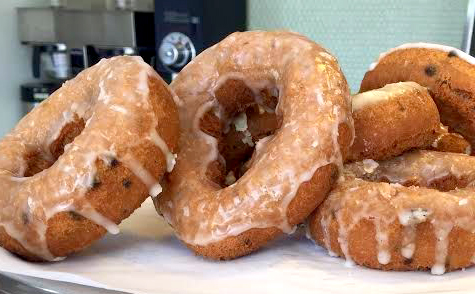 The Blueberry Lemon at Kettle Glazed Donuts
It’s easy to miss Kettle Glazed Donuts, a strip mall shop at the intersection of Franklin Avenue and the 101, but it’s worth a stop because the Blueberry Lemon is flecked with dehydrated blueberry bits (rather than candied) to balance the flavor without being cloyingly sweet. The lemon glaze, with hints of Madagascar vanilla, runs down the sides of these tasty rings. 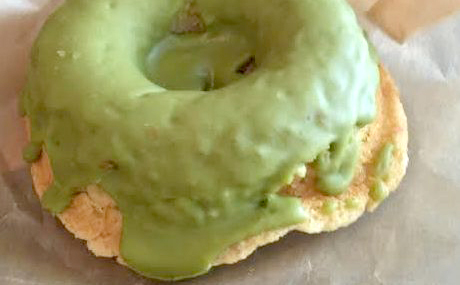 The Green Tea at Lazy Brewing Company
Lazy Brewing Company became the latest entry to LA’s doughnut scene when the coffeehouse opened less than two months ago and began selling locally made doughnuts from Lamke’s Handcrafted Kitchen. The business offers a covered plate of rotating flavors including chocolate coconut, cranberry and “the Homer Simpson”—a bright, berry-glazed ring with rainbow sprinkles. Matcha lovers will appreciate the earthy notes in the Green Tea doughnut, which is dipped in a thick glaze that hardens to a matte green color. 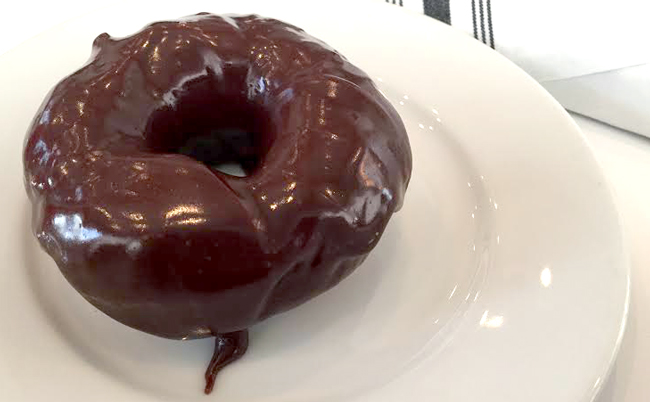 The Chocolate Glazed at Little Pine
The chocolate doughnut at Moby’s Little Pine is not on the “effortlessly inspired” menu, but it should be. The fresh-baked cake on a simple, white plate indeed appears effortless thanks to an unexpected crunchy exterior beneath a blanket of organic chocolate glaze. Knowing that all restaurant profits go to animal-welfare organizations makes the doughnut dining experience even sweeter. 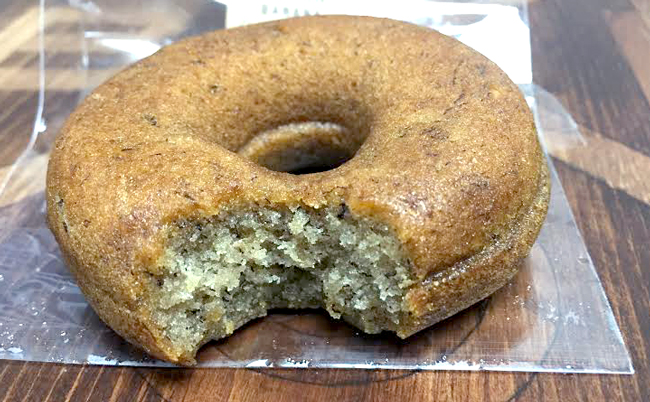 Monica Valencia is a writer based in Pasadena, CA.