A national museum devoted to cruelty-free living is one of the hottest new tourist attractions in the heart of the Midwest. Having opened last year in Chicago, the National Vegetarian Museum is free of charge to visit, with its pop-up exhibit of 12 panels traveling the Chicagoland area, moving from one public space to another until it finds a permanent home. Here are ten takeaways from this revolutionary museum filled with vegan photos, facts, recipes (including Alicia Silverstone’s irresistible Chocolate Peanut Butter Cups), and jaw-dropping videos.

1. It’s all Greek to me
Dating all the way back to 570-495 B.C., Greek mathematician and philosopher Pythagoras was one of the first modern vegetarians, advocating for the philosophy of being kind to animals by not eating them. In fact, until the word “vegetarian” was coined in the nineteenth century, an animal flesh-free diet was commonly referred to as “Pythagorean.”

2. Gettin’ veggie with it
The city’s oldest 501(c)3 membership-based vegetarian organization, Chicago Vegetarian Society, was formed in 1889, offering outreach and education, cooking classes, lectures, and social events in support of kind living. Little known fact: Kay Stepkin, who created the National Vegetarian Museum, served as the society’s president between 1995 and 2001. 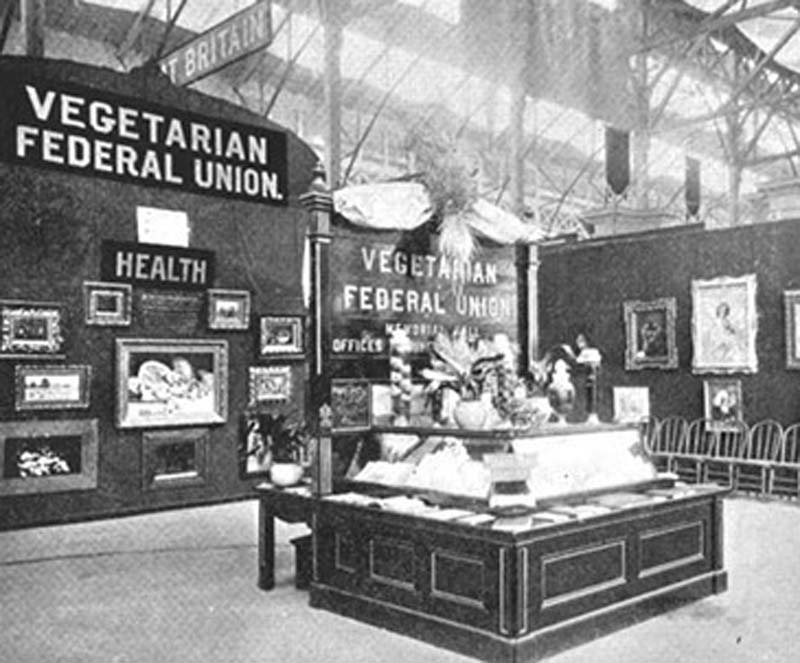 3. Time to unionize
The Vegetarian Federal Union, established with the help of representatives of English vegetarian societies, was dedicated to uniting vegetarians from around the world. They had an exhibition touting the benefits of vegetarianism at Chicago’s 1893 World’s Columbian Exhibition—a world’s fair highlighting the industrial, scientific, technological, and artistic achievements of nations from all corners of the globe.

4. Compassion first
One of the founding tenets of Philosopher Peter Singer’s 1975 game-changing book Animal Liberation is based on Jeremy Bentham’s principle of suffering, as noted in his book, An Introduction to the Principles of Morals and Legislation. In it, Bentham explains the basis for animal rights as a matter of moral principle: “The question is not, ‘Can they reason?’ nor, ‘Can they talk?,’ but ‘Can they suffer?’” 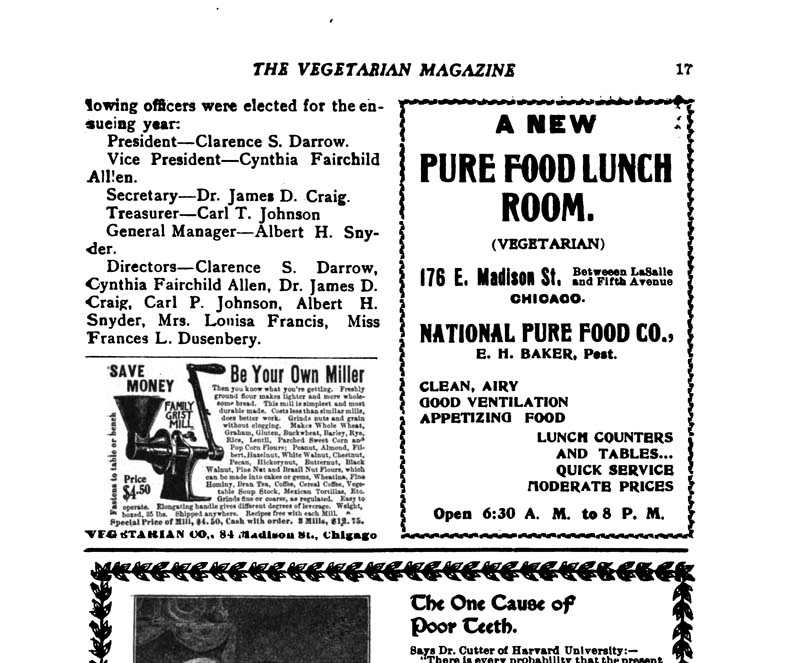 5. Windy City veg
Chicago’s very first vegetarian restaurant opened in 1900 on Madison Street. Called The Pure Food Lunch Room, newspaper ads at the time boasted its “good ventilation” and “appetizing food.” The first vegan restaurant to grace the city was Original Soul Vegetarian, which opened its doors on Chicago’s South Side in 1981 and still exists today, with two locations.

6. Veg media
Vegetarian Times, founded by Paul Obis, began in Chicago as a local, four-page handout in 1974. Within a year, it had become a full-fledged magazine and has now entered the digital age, publishing exclusively online. 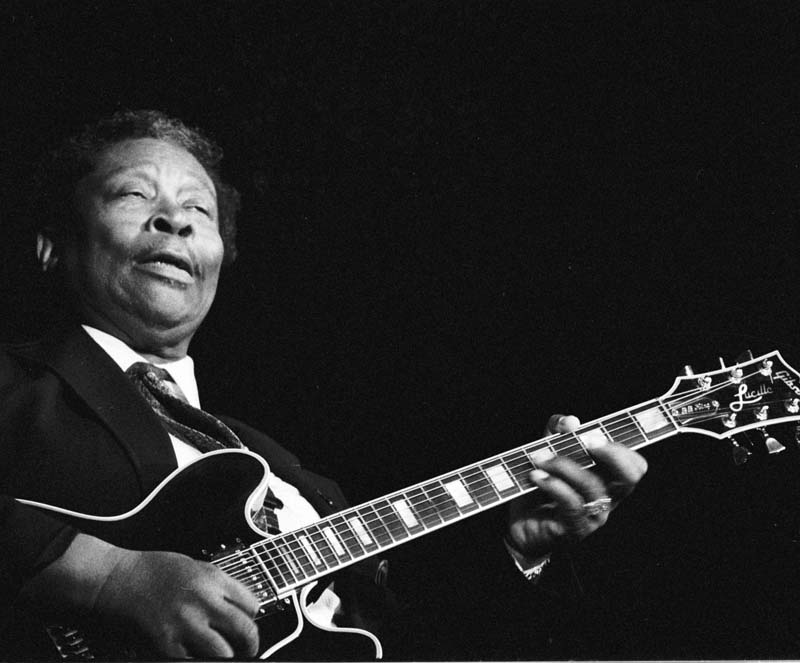 7. The thrill (of meat) is gone
Legendary musician B.B. King went vegetarian, and was meat-free for at least the last 17 years of his life. He may have sung the blues, but there’s no reason to be sad about his decision to forgo flesh!

8. Vegan, baby!
English animal rights activist Donald Watson coined the term “vegan” (specifying those who don’t eat meat, eggs or dairy) in 1944 by taking the first three and the last two letters of the word “vegetarian.” Watson was one of the founders of the Vegan Society in the UK, the oldest organization of its kind in the world.

9. Where it all vegan
Founder and President of The National Vegetarian Museum, Kay Stepkin, who was also the owner of the nationally known vegetarian store and restaurant The Bread Shop, created the museum all by herself at the age of 75. 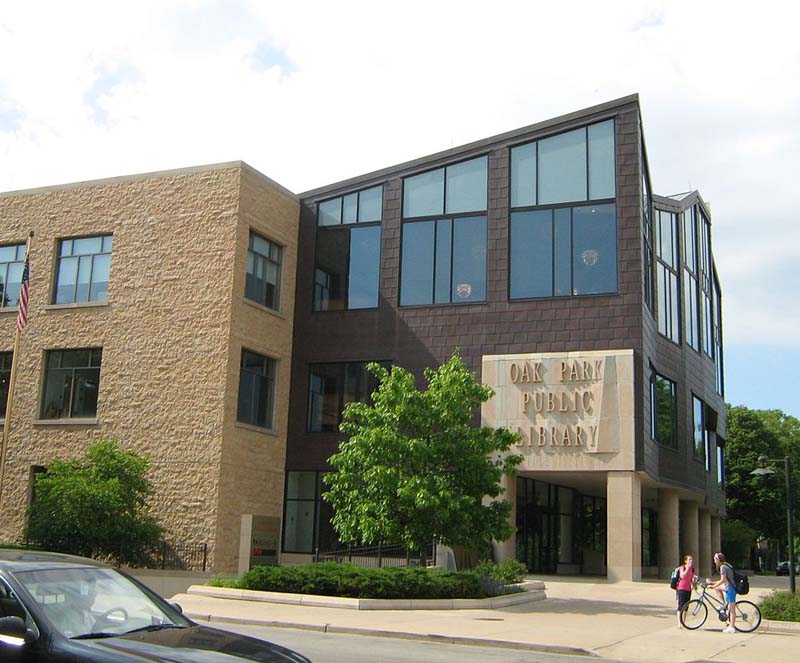 10. May the librarians be with you
The National Vegetarian Museum has gained access to public spaces due to the interest and support of many Chicago-area vegan and vegetarian librarians. The Lincoln Park, Evanston, Daley, and Oak Park Libraries have been just some of the stops for this traveling exhibit.

BONUS! Once the NVM settles into a permanent home, the traveling exhibit can come to you! Contact Stepkin at info@vegmuse.org to find out how your city can receive the museum for a period of time. You’ll be able to have a panel about your own city’s vegan history included!

Elysabeth Alfano is a vegan content producer, reporter, and host of The Accidental Vegan Chef and the Awesome Vegans Podcast.

The First Truly Ethical African Safari Is Coming This Spring

The 7 Vegan Festivals Worth Traveling For

The US Is Getting a National Vegan Welcome Center