Three-and-a-half million people pass through Tokyo’s Shinjuku Station every day, so it’s hard to believe that amidst the mayhem of the unrelenting crowd, you could reach a vegan paradise in less than a couple of hours. Yet that’s exactly the case, and the efficient transportation system seems devised for liberation from the world’s most populated metropolitan area. Two trains, a bus, and a cable car—each more sedately paced than the last—lands you in Oshi, a magical village on Mount Mitake boasting 25 tranquil shukubo. If you visit, be forewarned: Your life will never be the same again. 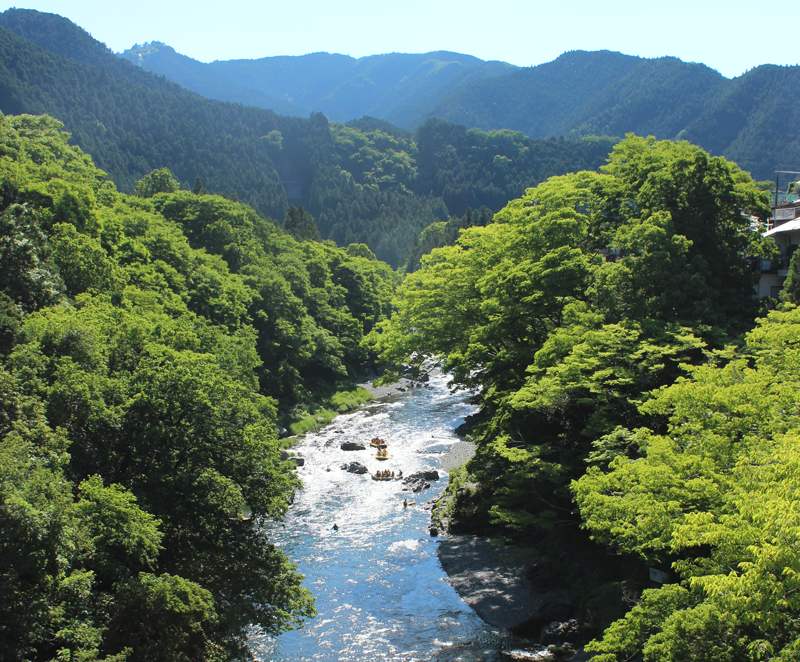 Walk into history
Normally, shukubo indicate Buddhist temple lodgings, but Japan’s indigenous religion, Shinto, has shrines. Each of Oshi’s shukubo, complete with with its own priest, provides religious services for donating members, but also operates like a traditional inn (religion is definitely not required). For 1200 majestic years, Musashi Mitake Shrine has drawn pilgrims. First were mountain ascetics, performing difficult rituals in search of spiritual growth. Later, there were samurai. Commoners, finally allowed around 1600, formed associations through which to save money and send representatives, who stayed in the shukubo. Visitors today tend to be hikers enjoying the untrammeled nature of the 485 square-mile Chichibu-Tama-Kai National Park. Luckily, it’s also a vegan paradise. With advance notice, most shukubo will omit animal products entirely, a solution made easier by the fact that local specialties are already of the vegetable variety: fresh wasabi root, sourced from clear streams feeding into the rushing Tama River, and konnyaku “sashimi,” handmade in each household from konnyaku potatoes harvested on the mountain. 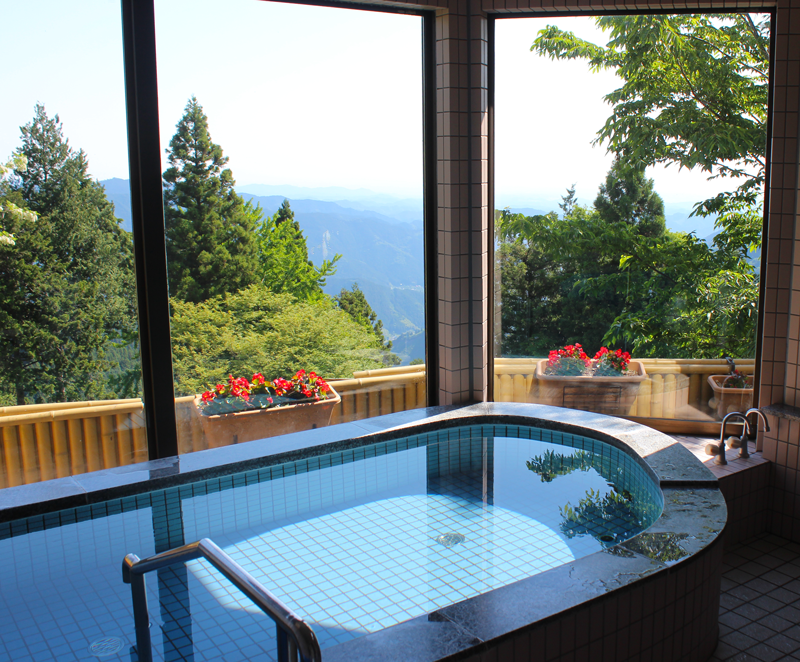 Choose your own adventure
At Mitake Station, every other passenger seems dressed for serious hiking. Some visitors choose to stay at a shukubo that offers takigyo, huddling under a cool waterfall at dawn—an experience similar to those sought by ancient ascetics. My travel companion and I selected two lodgings known for panoramas and provisions: Mitake Sanso and Kuraya. As with many traditional Japanese lodgings, pampering begins the moment you step over the threshold, which at Mitake Sanso was a roofed torii gate adorned with a good-sized shimenawa, a straw rope decorated with paper shide indicating a sacred space. We arrived in the late afternoon, and were greeted by Youko Kanai, chef and co-owner with her husband, Kunitoshi Kanai. After being shown to a tatami room overlooking the majestic forest, we changed into the yukata and haori jackets provided, and eagerly made our way to the women’s bath. Because I learned to cook while living in a thatched farmhouse in the mountains near Kyoto, I was familiar with many of the sansai (wild vegetables) still commonly used at these shukubo, so it was like meeting old friends at every meal. However, the elaborate multi-course meals, similar to shojin ryori—the food of Buddhist monks—were nothing I’d experienced before. 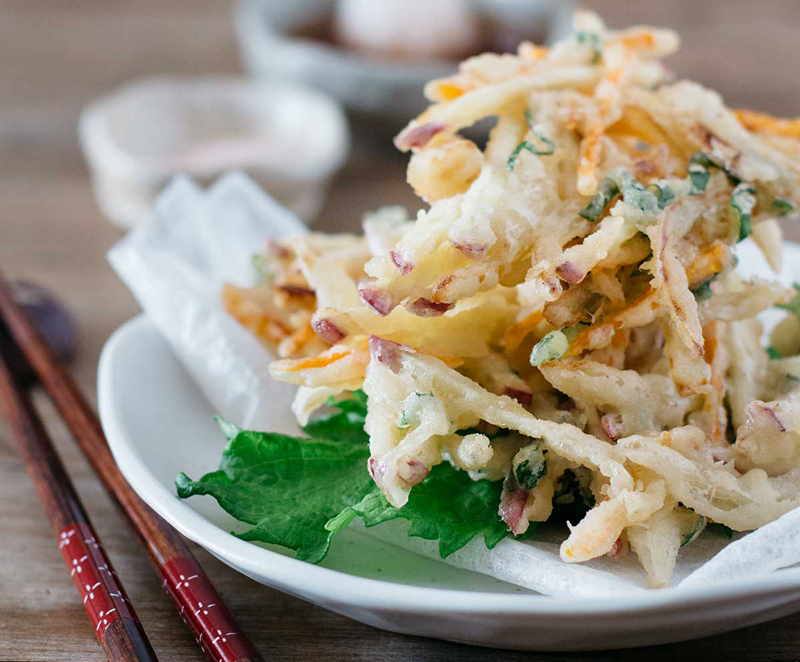 Bring new dimension to eating your veggies
On our first evening there, one of the many vegan delicacies served to us in a private dining room at Mitake Sanso was konnyaku sashimi with ginger and mustard; a stewed mix of bamboo shoots, kabocha and Japanese snap peas; fried eggplant and fresh myoga (Japanese ginger); homemade pickled daikon in two colors; stewed wasabi stems; dried persimmon; and fresh scallion with miso paste. And those were just the appetizers! The second course was a lovely mixed tempura kakiage with a variety of sansai, such as kogomi (ostrich fern) and koshiabura, which contains nutrients that help lower high blood pressure while providing a heap of antioxidants. Floating in the clear kelp broth was a sprig of mitsuba and a delicate flower of fu, the gluten used in much Buddhist vegetarian cuisine. After another bath and a snack of some tea and rice crackers, which we enjoyed in our room—followed by a nightscape twinkling with faraway lights—we settled on our futons for a restful sleep. We awoke early, dropped our bags at Kuraya, and hiked to the Rock Garden, a forested valley dotted with stones and waterfalls. Lunch out at one of the simple restaurants lining the shopping street on the way to the shrine was soba, one hot and one cold, and some more konnyaku sashimi. 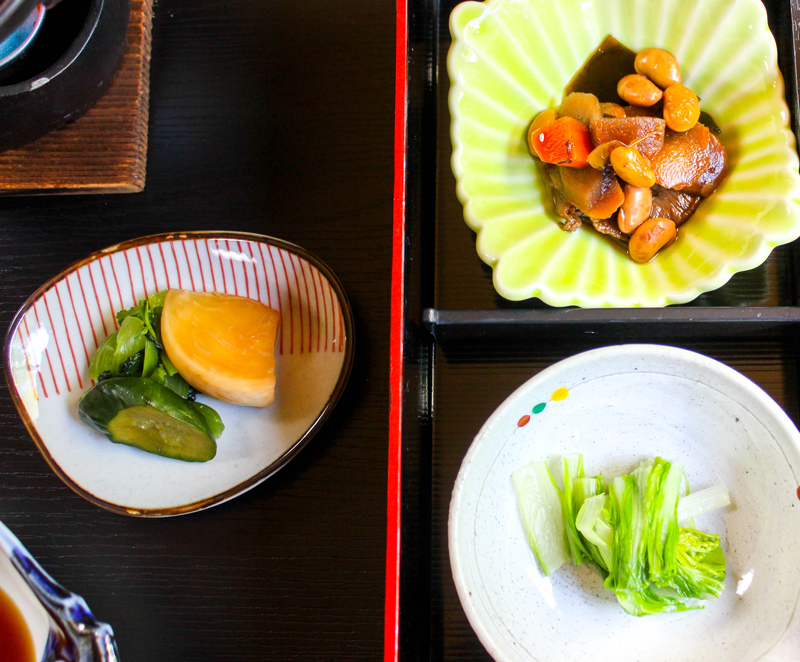 Experience powerful, ancient culinary practices
Up the street from Mitakesanso, Kuraya is a 30-year-old building replacing an Edo-era thatched one. This building was a sister to the Tangible Cultural Property Baba-ke Oshi Jutaku (House), standing now in newly rethatched glory. All four meals we ate at the shukubo were surprising in their simplicity, seasonality, and presentation, but Kuraya’s breakfast stood out for the depth of flavor in such humble dishes as stewed konbu (kelp), carrots, burdock root, and soybeans; steamed uguisuna (mini turnips); and sautéed udo (Japanese spikenard). My partner and I agreed that we had never experienced more centered and grounded mealtimes than during this trip.

Notably, the eldest proprietor of Kuraya—priest Yutaka Suzaki—is worried about the village’s economy. But based on the food alone, it seems that for the vegan-friendly shukubo of Mount Mitake, the future is bright. Whether you want your visit to revolve entirely around the pristine nature of the national park, or you are looking for a multi-pronged trip including daytime gallivants to Tokyo followed by nighttimes relaxing over an incredible vegan meal, sumptuous bath, and blissful sleep, there is something here for everyone … as long as it’s paradise, and unsurpassed relaxation, you are hoping to find.

Photo courtesy of Molly Hohle and The Chopstick Chronicles