We are so grateful for your continued efforts in reaching out to the plant-based community. The fact that you got your vegetarian menu certified by the American Vegetarian Association last year is a big thumbs up in our book. You even went a step further this month and created the “How to Eat Vegan at Taco Bell” guide, filled with photos and tips for how we can steer clear of animal products at your fine establishment. That’s more than any of your competitors have ever done (looking at you, Domino’s!).

But let’s talk about the (not confined nor oppressed) elephant in the room. We would never bite the hand that feeds us—we’re vegans, hands are strictly off the menu—but what’s with the upcharges on cheap-o ingredients such as lettuce and beans? Lettuce is the mere suggestion of a vegetable, a green cellulose mass of mostly water, and yet you tack on $0.30 cents to add a handful? The same goes for beans, which also run us vegans $0.30 cents extra. You may have heard rumors that veganism is expensive, but we’re not trying to go all Gwyneth Paltrow on our green shakes or Tom Brady on our snacks. These are drunk-munchies tacos and burritos and we want them cheap … or at least not any pricier than their animal-based counterparts.

To illustrate our point with cold, hard facts, we did a little math. Here are two menu items from your newly released vegan guide, with the suggestions you made taken into account, compared to the prices of unmodified menu items: 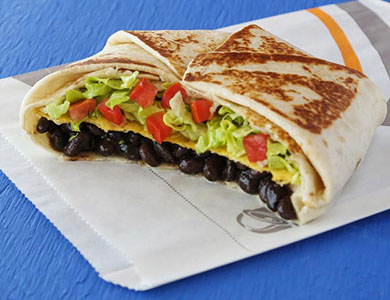 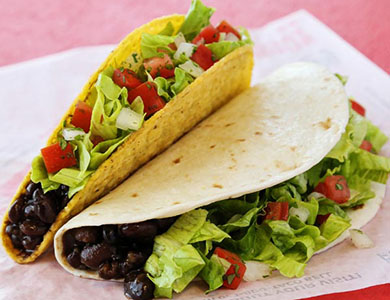 We’ll give you a high five for working out the “make it fresco,” where you replace dairy products for pico de gallo, free of charge (instead of charging the $0.30 it costs on your menu), and thank you so much for offering the Black Beans & Rice option, sans animal products, right from the get-go. Every once in a blue moon, the darling Taco Bell cashiers will even hit some magic button on their screens and “sub beans for beef” will pop up, nullifying the upcharge we rack up when picking plant-based proteins. We like that. Spread the memo on that button to all your locations.

But since we’re talking mano-a-mano, can we address the fact that in order to make an item vegan, we’re taking up to three ingredients out of most menu selections? As such, an upcharge for beans—how do you think we get our protein?—seems a bit unreasonable.

We get it. Meat and dairy companies strike deals with you, and are subsidized to create tortured animal products that cost that no more than a stick of gum wholesale. But here’s an idea: You know how your bean burritos continue to be your second highest selling menu item? Bearing that in mind, think of all the vegans, vegetarians, flexitarians, beanatarians, and beyond who would flock to Taco Bell if you stopped charging them extra for veggie swaps. Heck, even more plant-based menu items would be top-sellers, putting the meaty options at the bottom of the barrel. So, let’s think: Do you really need to buy so much cheap meat and cheese from your suppliers to sustain a future where your customer base will want nothing to do with them? Environmentally taxing products that’ll just be adding to our global waste problem, and something you may be up-charged for in the future, if the Paris Agreement holds?

Howzabout we just come to an agreement of our own. We vegans will come (likely late at night) and order all nine of the vegan options you describe in your guide, as long as you promise not to charge us extra. Mm-k? And when you come to our house, Taco Bell, we’ll swap a hefty serving of kale (with a generous sprinkle of nooch) into whatever you want us to make for you, free of charge.

With love (and tacos),