Esther the Wonder Pig has been capturing hearts around the world—and helping to spread the vegan message—ever since Steve Jenkins and Derek Walter rescued her in 2012, thinking she was a miniature piglet. Once Esther quickly grew into a 600-pound pig, the duo could no longer eat bacon and went vegan shortly thereafter. Since then, Jenkins, Walter, and Esther have been busy running the Happily Ever Esther Farm Sanctuary to help Esther and her friends live a good life, penning best-selling books, and creating viral videos of Esther eating vegan ice cream and playing in the snow. So what’s Esther been up to lately? Well, as it turns out, a whole lot. 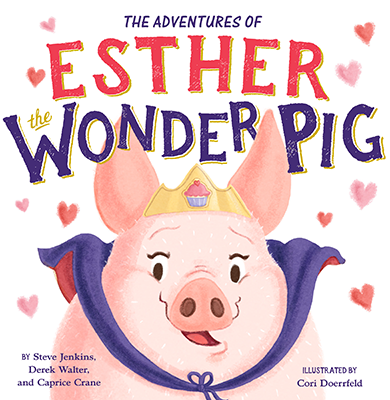 Based on the success of the 2016 nonfiction book Esther the Wonder Pig: Changing the World One Heart at a Time (written by Jenkins, Walter, and novelist Caprice Crane), a new series of fictional children’s books, called The Adventures of Esther, based on Esther’s life are in production. The stories are aimed at children because young people have not yet developed the cognitive dissonance needed to disconnect friends and food. The new book—out in March 2018—is filled with illustrations by Cori Doerrfeld that Crane hopes will “teach people compassion and help put a face to the bacon they eat—and hopefully help people realize they don’t want to eat piggies at all!”

“We put the story of Esther’s childhood into adorable illustrations,” Jenkins says, “and it came out beautifully. The nonfiction books are a very personal and honest telling of what happened to us as we got to know Esther and how deeply our relationship with her impacted every other aspect of our lives. We want the children’s book to be a little seed that gets planted in readers’ minds, that helps them see Esther the way we do. She’s a friend and a family member to us—she’s no different than the other animals we already shared our home with.”

Furthermore, the authors hope the message of compassion extends beyond that of human-animal relationships. “We normalize Esther having two dads without pointing it out as a ‘thing’ because it’s not a thing,” Crane says. “It’s life. Families come in all shapes and sizes.”

“It doesn’t matter if it’s two men loving each other, or loving a pig,” Jenkins says. “Love is love.” 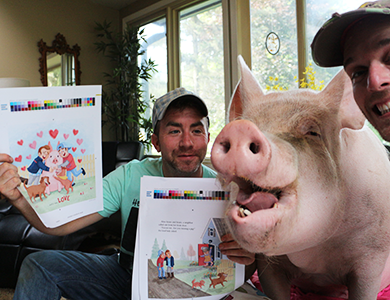 With the book in its final stages, Jenkins and Walter are taking a break from writing to focus on the week-long Esther Cruise, which will set sail on February 24, 2018 from Tampa, FL (with ports of call in Grand Cayman, Mahogany Bay, Belize, and Cozumel). While all of the ship’s menus are not exclusively vegan, Carnival has been accommodating in implementing an Esther-approved vegan menu developed by Chef Linda from Esther’s own kitchen—complete with appetizers, entrées, and desserts that change daily. The ship’s staff also added vegan cheese to its 24-hour pizza bar and a veggie burger on the menu at the ship’s burger joint. “You need to stay up until 3 am one night and get the pizza—it tastes particularly good at that time of night for some reason,” Jenkins says. Jenkins and Walter will be on board to give lectures, screen vegan films, host cocktail parties, and spread the vegan message—all while raising funds to support Esther’s sanctuary.

“We put a few hundred vegans on a ship in the middle of the sea, with over 1,700 non-vegans,” Jenkins says. “Our group was such a blast, and so enthusiastic, that by the end of the week, every single person on that ship was asking about ‘the pig group,’” with many passengers sampling the vegan menu and joining Esther’s events. 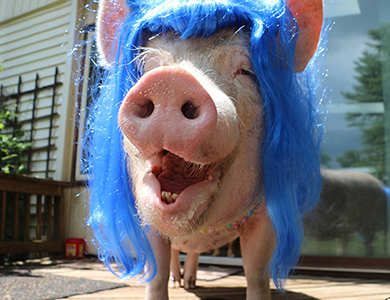 Esther will not be on the cruise, a question Jenkins says he is asked often. “She’s got too many things going on at the farm,” Jenkins says. “Between naps and swimming lessons, her schedule is pretty much jammed.” Esther’s dads transport her only from her Ontario abode for medical situations, as forcing her to attend events was never their plan. Nor was adopting a 600-pound pig who would change their lives.

“Esther inspires us every single day,” Jenkins says. “There isn’t an aspect of our lives that she hasn’t changed, and we’ll be forever grateful for the day we met her.”

Esther promised us that a plethora of clever projects are in the works for the future but at the moment, she’s keeping her lips shut and her mouth full of her favorite foods—which happen to be mangoes, Scotch mints, and pasta.

Anna Starostinetskaya is VegNews news editor and would love to share a plate of spaghetti with Esther, Lady and the Tramp-style.