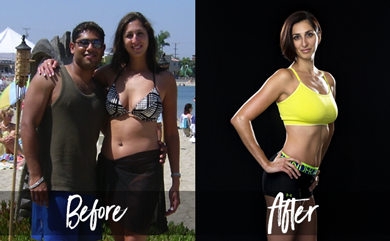 How Brooke Did It
When Brooke Goldner was 16, she was was in stage 4 kidney failure due to a serious case of lupus. Initially told she had six months to live, Goldner defied all odds by staying alive with the help of intense chemotherapy, and upon completion, was able to wean herself off all medications. But her struggle was far from over.

When she entered medical school in her twenties, Goldner developed anti-phospholipid antibodies—a painful malady that causes blood clots, which in turn gave her double vision and even resulted in a stroke. She dealt with this new diagnosis by injecting her stomach with blood thinners every day, while stomaching the likely reality that she would never be able to bear children.

When all seemed lost, Goldner became romantically involved with fitness trainer Thomas Tadlock, who encouraged her to stop consuming cheese and eggs (she was a long-time vegetarian by that point). Trading in her animal products for a high-raw diet rich in fresh vegetables, after four months, Goldner no longer suffered from joint pain, migraines, fatigue, and more shockingly, her lupus and blood clot-inducing antibodies disappeared too. After two years of perfect lab results, she weaned herself off blood thinners, and four years later—even though she was still warned against it—Goldner became pregnant and gave birth to a baby boy. Now healthy as ever at 40, Goldner has dedicated her career as a medical doctor to advocating for disease prevention and treatment by way of vegetables.

What Brooke Eats In a Day

Brooke’s Advice
“Focus on what you want for your life and health, instead of what you think you might miss out on.”

For more of VegNews’ Veganism Saved My Life series, check out Brooklyn Borough President Eric Adams’ story, and check back next week for more. And be sure to pick up a copy of the January+February issue of VegNews, on newsstands now!

After photo courtesy of Mellisa Schwartz