Beyond the hill and past the playground of the Ben & Jerry’s factory in Waterbury, VT lies the flavor graveyard. It’s where discontinued flavors go to rest, each complete with its own decorated tombstone and accompanying punny epitaph. As visitors walk somberly through the gravesite, some experience deep longing for a lost love, bitterness over a flavor that was tragically misunderstood, or regret over not appreciating a flavor until it was gone. We, however, just felt hungry. Because non-dairy flavors have avoided this fate, we weren’t there to mourn, but we did think some of those flavors sounded pretty amazing. The Ben & Jerry’s website has a section for customers to write in and suggest the resurrection of a specific flavor, but we want to take it a step further. From Vermonty Python to White Russian, here are the flavors we would love to see given a second life … and veganized.

1. Schweddy Balls
Alas, alas, Schweddy Balls was so young and full of potential, but with the coming of 2012, its life was mercilessly cut short. Made with rum-infused vanilla ice cream and loaded with fudge-covered rum and malt balls, this flavor was created exclusively for the 2011 holiday season. It was a bit before the huge spike in the vegan movement, but we think it could have real staying power in today’s plant-based world.

2. Fossil Fuel
Well, the name doesn’t really help here—it’s obviously meant to lie in the ground—but we’re sure Ben and Jerry’s can pull a Jurassic Park move and give it new life for all to enjoy. We would love to sample with sweet ice cream with chocolate cookie pieces, chocolate dinosaurs, and a fudge swirl. We might be vegan, but if a dinosaur is made out of dairy-free chocolate, it’s fair game. 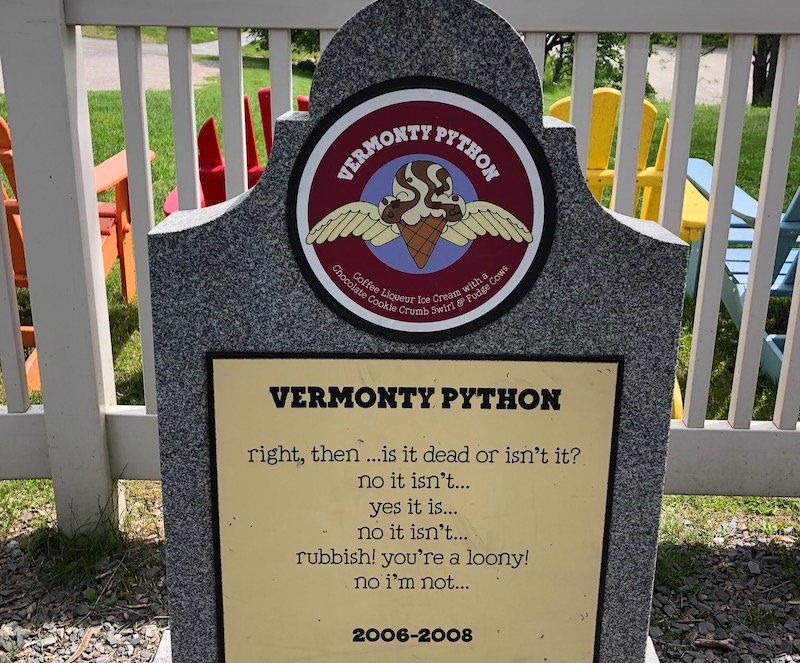 3. Vermonty Python
The name itself would make us reach for this flavor in the ice cream aisle, and our imagined vegan version of what’s inside seals the deal. From 2006-2008, devoted Monty Python fans could eat their feelings with this coffee liqueur ice cream ribboned with chocolate cookie crumb swirl and studded with fudge cows. Like the film, this flavor should be a classic … if they used the almond milk vanilla base and featured rescued farm sanctuary cows!

4. Peanut Butter and Jelly
How could peanut butter ice cream loaded with peanut butter bits and swirled with strawberry ice cream possibly fail? The nail was hammered into its coffin in under a year—it only lasted from 1989 to 1990. Like many foods, we bet this would taste better if veganized. C’mon, the sandwich is already “accidentally vegan.” This flavor is destined for the ever-growing non-dairy collection.

5. Cool Britannia
This vanilla ice cream with strawberries and fudge-covered shortbread was just a toddler when it was buried six feet under. The company cranked it out from 1995-1998, but ultimately, customers weren’t fans of tea time flavors in their ice cream. If given a proper plant-based makeover, we would daintily dip our spoons into the pint—pinky out.

6. White Russian
Literally, let’s raise a pint to this boozy flavor. Made with coffee ice cream and Kahlua coffee liqueur, a generous serving is sure to give you a buzz in more ways than one. To veganize it, the flavor gurus would have to swap the Kahlua (it’s not vegan) with a homemade brew, but we found a brilliant recipe online they could use. Actually, we may just try making this coffee liqueur ourselves!

8. Coconutterly Fair
This flavor reminds us of a German chocolate cake—chocolate ice cream melds with coconut caramel swirls and generous chunks of chocolaty coconut caramel crunch. We know B&J has nailed vegan caramel—its Non-Dairy Caramel Almond Brittle is insanely good. The flavor gurus could mix up a vegan version in no time. Let’s make it happen, Ben and Jerry!

9. Tennessee Mud
We cannot confirm, but this flavor might have been discontinued due to its high alcohol content. It was only around for a year, but we can’t fathom how a coffee ice cream spiked with amaretto, Jack Daniels Tennesse Whiskey, and roasted slivered almonds could possibly fail. Bring it back, and we promise to enjoy in moderation.

10. Cow Power
Reincarnated as a non-dairy option, this flavor would truly embody its name. We would love to dig a spoon into this sweet ice cream loaded with chocolate cookie pieces, dark chocolate (rescued) cows, and a fudge swirl. It could be the signature flavor of a new Ben & Jerry’s sponsored farm sanctuary.

11. Dublin Mudslide
The epitaph for this two-year-old flavor says “The bottle is empty, the cup & the glass. Mud with Irish cream was not meant to last.” We respectfully disagree. May the Bailey’s Almondine Irish cream liquor ice cream with chocolate chocolate chip cookies (not a typo—the cookie itself is chocolate!) and coffee fudge swirl live on!