Non-profit conservation organization The Whale Sanctuary Project (WSP) has officially opened its visitor and operations center in Sherbrooke, Nova Scotia—marking the beginning of its plan to open North America’s first seaside sanctuary for whales rescued or retired from a life of captivity. The recent grand opening celebration hosted more than 100 people and several government officials, including Lieutenant Governor of Nova Scotia Arthur LeBlanc.

“Today was the successful grand opening of our Sanctuary Operations Center in Port Hilford, Nova Scotia,” the WSP posted on Instagram. “We were there to celebrate this major milestone in our project and the next step in achieving our goal of creating the first seaside sanctuary for belugas and orcas in North America.”

The planned 40-hectare sanctuary is expected to be built next year in a bay that’s open to the North Atlantic Ocean near Port Hilford, NS, a 20-minute drive from the visitor center. It will span about 50 football fields—which is approximately 300 times larger than the biggest captive whale tank in any marine park—and is designed to accommodate up to eight whales. 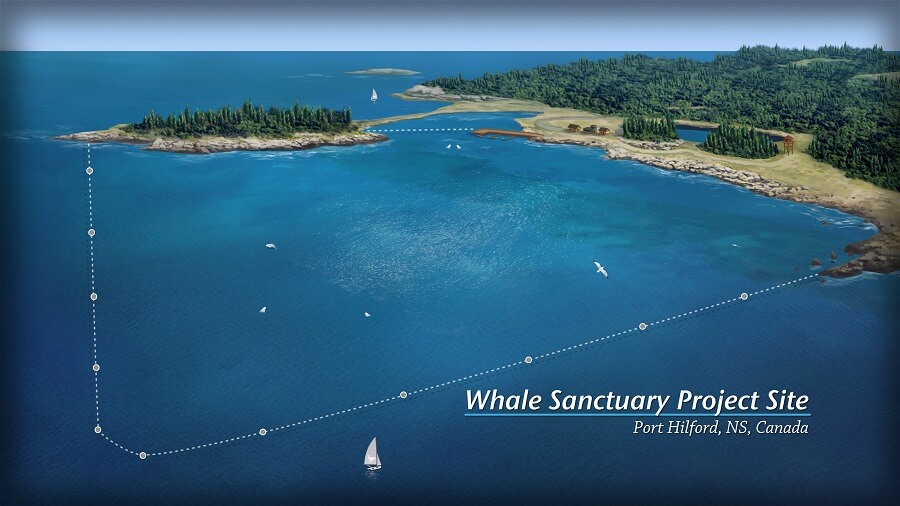 The sanctuary will allow the whales to live out their lives in their natural habitat with enough room to engage in their natural behaviors, albeit in a protected area that is enclosed with underwater nets. Because captive whales have spent their lives in a tank, they cannot return to the open ocean due to their lack of survival skills. The sanctuary will keep them safe and well-protected from rough weather, and a hydrodynamic study has shown that the bay is regularly flushed by currents and tides so any buildup of whale waste will be washed away.

Last year, the WSP announced plans to build the sanctuary, following the passing of Canada’s Ending the Captivity of Whales and Dolphins Act, which prohibits the wild capture, captivity, and breeding of whales, dolphins, and porpoises, effectively ending the practice of exploiting cetaceans for entertainment. Under the law—which took more than three years to pass due to delays and obstructions—there are exceptions for rescue and rehabilitation to ensure whales and dolphins can get aid if they need it, and allows animal sanctuaries in Canada to care for cetaceans if it is in the animals’ best interests.

To help house these animals, toy company Munchkin provided the initial funding necessary for determining the appropriate site for the WSP sanctuary, a lengthy process that took into consideration factors such as water and tide conditions and the whales’ potential impact on local wildlife. The WSP group has started a campaign to raise up to $20 million for the project, which also includes a veterinary clinic and interpretation center near the refuge. Another $2 million will be needed annually for operations. If the necessary permits are acquired in time, the refuge hopes to welcome its first whales in early 2023. 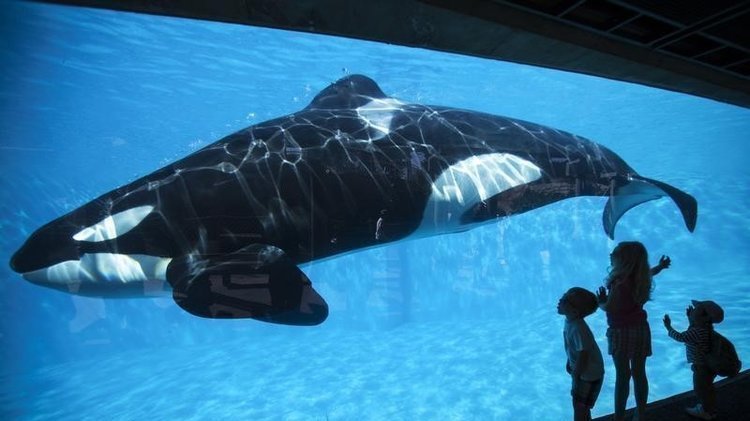 Public outcry to save whales at aquariums

According to estimates, approximately 200 belugas and 50 orcas are being confined in marine parks and aquariums around the world. In Canada, rumors have been circulating that controversial Niagara Falls attraction Marine Land is shuttering for good this year following the release of disturbing footage of its last surviving orca, Kiska, bashing her head against the side of the concrete tank where she lives alone. The 44-year-old cetacean has lived all but the first few years of her life in captivity since being captured off the coast of Iceland in the 1970s. The five calves Kiska birthed at the facility all died at a young age, and she has been living in isolation in the tank since 2011. Her treatment has been called into question for years as her mental and physical state continue to decline.

Similarly, at SeaWorld locations in San Diego, CA, San Antonio, TX, and Orlando, FL, dozens of whales are still held in captivity and exploited for entertainment. Last year, animal-rights group People for the Ethical Treatment of Animals (PETA) sent a letter to SeaWorld’s interim CEO Marc Swanson offering him $250,000 toward the building of a seaside sanctuary in exchange for a commitment to release the park’s marine animals to sanctuaries.

Though the offer was not accepted, previous pressure from PETA resulted in SeaWorld pledging to phase out “dolphin surfing” shows that force trainers to ride on dolphins’ faces and backs. Additionally, backlash from 2013 documentary Blackfish—which resulted in deep losses in profits and attendance—pushed SeaWorld to cease breeding orcas in captivity in 2016 and to cancel its orca performances in 2018.

“[SeaWorld] seems intent on being dragged, kicking and screaming, into ultimately releasing these animals to seaside sanctuaries,” PETA Executive Vice President Tracy Reiman said in a statement. “PETA is calling on it to put a plan in place now.”

For more on whales in captivity, read:
Orca Documentary Takes an In-Depth Look at the Case Against Captivity
TripAdvisor Cuts Ties With SeaWorld
Kayla Becomes Fourth Orca to Die at SeaWorld in Two Years