Actor and vegan activist Joaquin Phoenix hopes his son River will decide to be vegan when he grows up but says he won’t “force” the lifestyle on him, according to a recent interview with media outlet Sunday Times. “Well, certainly I would hope that [he will be vegan]. But, I’m not going to impose my belief on my child,” Phoenix told the publication. “I don’t think that’s right; I’m going to educate him about the reality.”

Last September, Phoenix and vegan actress Rooney Mara welcomed their first child, River—named after Phoenix’s vegan brother, who died in 1993. Since then, the actor has kept his son out of the spotlight. During his interview with Sunday Times, Phoenix revealed that although he plans to allow his son to decide if he wants to follow the vegan lifestyle, “I’m not going to indoctrinate him with the idea that McDonald’s has a Happy Meal because there’s nothing fucking happy about that meal,” he said.

“I’m not going to tell him that it’s OK to read books about all the wonderful little farm animals, and they say ‘Oink oink oink’ and ‘Moo moo moo,’ and not tell him that that’s what a hamburger is,” Phoenix said.

In an exclusive interview with VegNews last year, Phoenix recalled as a child watching fish being caught and pulled up on a boat, and then flung against the wall to be stunned before they suffocated to death. “It was clear to us, from a very young age, that what was happening was an injustice. It was an exploitation, a violence—an unnecessary violence,” Phoenix told VegNews. “And we made that connection on our own, without our parents’ prompting. And in fact, we challenged them, and were quite angry that this was something we had been fed. We never before had made that connection that a fish was once this living being that deserved and had the right to autonomy … Having those moments with fish is kind of rare, and so it was a profound moment for all of us. And that’s what started our veganism.” 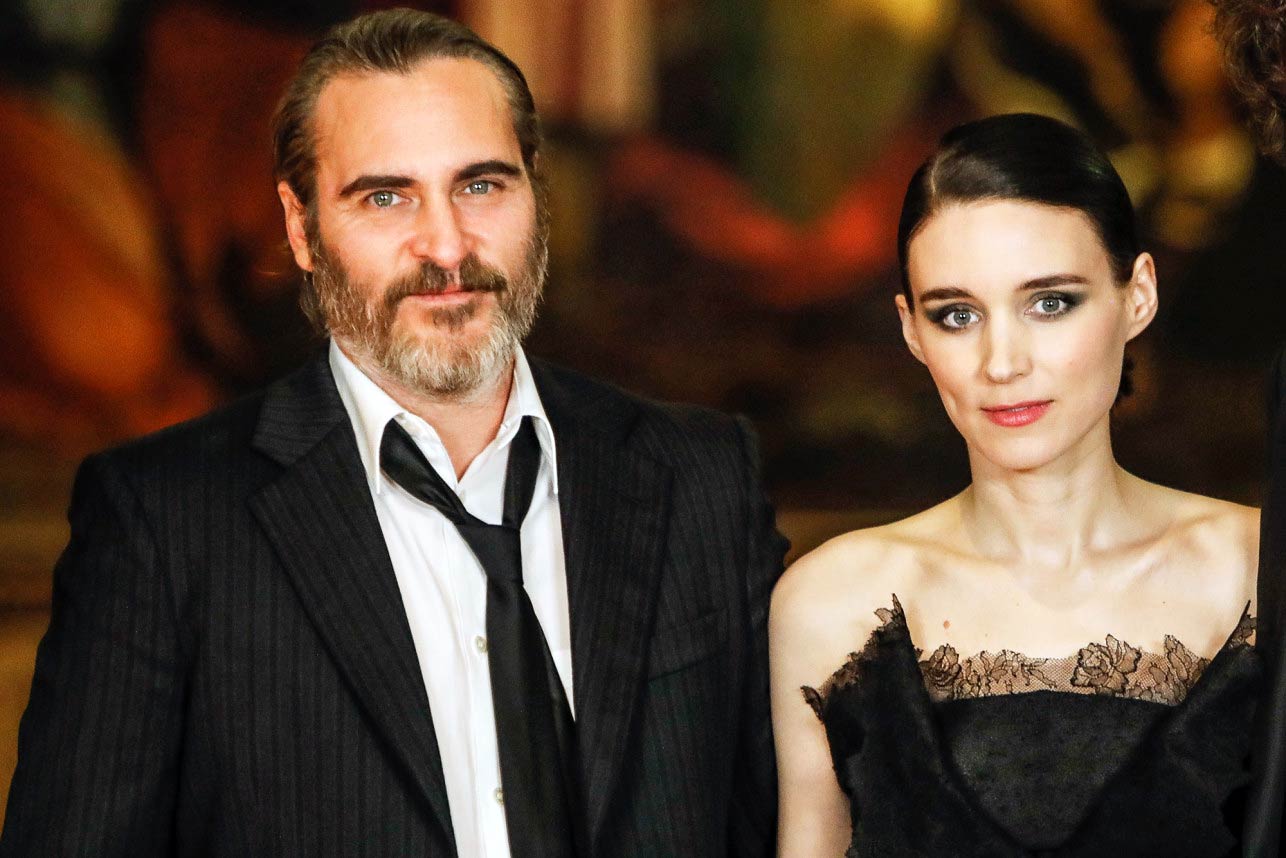 Last year, prior to having his son, the 45-year-old actor brought awareness of the animal rights issue to a larger audience at the 92nd Annual Academy Awards, where he delivered his historic acceptance speech for the best actor award for his starring role in Joker. Immediately following his Oscar win, Phoenix and Mara—along with their mothers, Earthlings director Shaun Monson, Los Angeles Animal Save Founder Amy Jean Davis, and Farm Sanctuary President and Co-founder Gene Baur—headed to meat plant Manning Beef in California to rescue a cow (Liberty) and her calf (Indigo) from slaughter.

During the 2020 awards season, Phoenix and Mara also publicly protested animal agriculture and had a hand in transitioning menus at the Golden Globes, Screen Actors Guild (SAG) Awards, Critics’ Choice Awards, and the Oscars—all ceremonies that either fully eliminated animal products from their menus or substantially increased plant-based options this year.

In addition to navigating parenthood, Phoenix is heavily involved in animal activism. Last year, the couple executively produced End of Medicine, a documentary that aims to expose the culpability of animal agriculture in creating massive public health threats such as antibiotic resistance, swine and bird flu, food-borne illness, MRSA, and, the current COVID-19 pandemic. Phoenix also debuted feature-length documentary Gunda, which he exclusively produced with Russian filmmaker Victor Kossakovsky. The black-and-white documentary zeros in on the life of mother pig Gunda and her piglets, showing how the animals develop relationships and interact with their surroundings. While the film does not depict the family’s ultimate fate, the viewer is made acutely aware that these intelligent beings are slaughtered for food.

Should Phoenix push his vegan beliefs on his child?

During his interview with VegNews, Phoenix discussed ways children’s natural instinct to care for animals gets muffled by societal norms, and that children would probably make the choice to be vegan if they weren’t encouraged to do otherwise. When meat-eating parents raise their children to eat meat, there’s a natural disconnect between the animals they see in movies and the animals they have as companions, and the animals they are taught to consume, Phoenix points out.

“I have friends that feel like we have to be very careful about exposing kids to the truth about what happens to animals, animals whom we use for food. And I have friends that say, ‘I don’t want to indoctrinate,’ and I’m like, ‘What are you talking about? Every fucking milk carton is indoctrination,’” Phoenix told VegNews. “When you see ‘happy cows’ on a farm on a carton of milk, you’re sending a clear message that you’re cool with what’s happening. But that’s not representative or indicative of what their lives are actually like. So I’m not sure what the balance is. That personal decision is between a parent and their child, but I do think that we have to get honest and fight the misinformation that exists out there on a product that we use for food and beverage.” 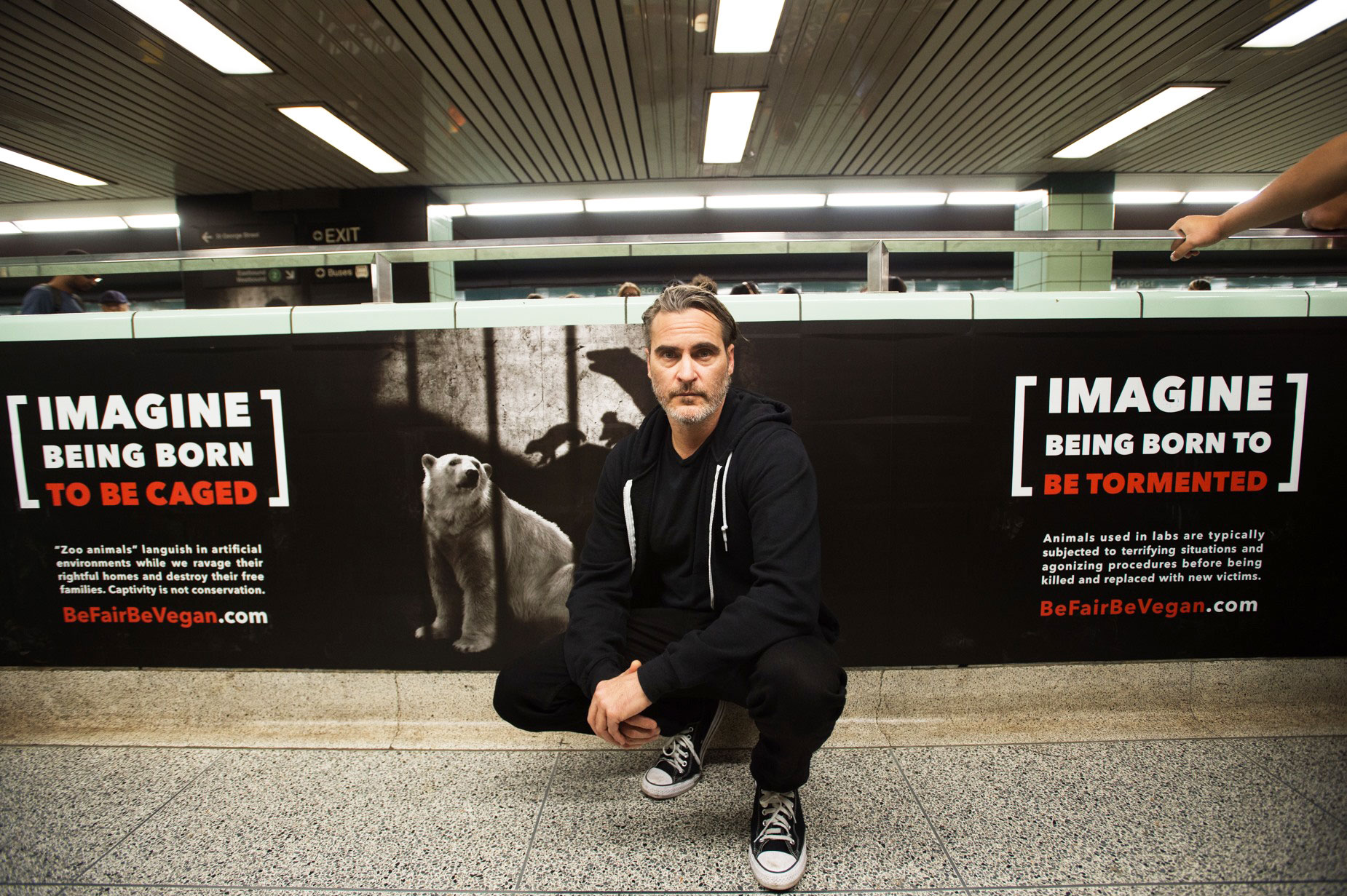 Raising a child vegan has been recognized as safe by many health organizations. According to the Academy of Nutrition and Dietetics, “appropriately planned vegetarian, including vegan, diets are healthful, nutritionally adequate, and may provide health benefits for the prevention and treatment of certain diseases.”

As a vegan parent, Phoenix’s goal is not to brainwash or try to convince his son River of his beliefs, but to just show his son the truth about the animals that are slaughtered for food. “If you just showed them the truth, most children would say, ‘I don’t want to be a part of that,’” Phoenix said.