For many of us, a classic, crispy-on-the-outside, gooey-in-the-middle grilled cheese sandwich is at the top of our comfort food list. And while it’s not a difficult sandwich to make, some subtle tips—and being aware of common mistakes—can make that grilled cheese sammy go from good to delectable.

How to make a vegan grilled cheese

A successful vegan grilled cheese has but a few requirements. “It should have bread that’s just slightly browned and cheese that’s melted throughout and is slightly greasy and slightly salty,” says Michael Suchman, co-author of NYC Vegan and the other half of vegan activists VeganMos. Suchman adds that grilled cheese makes him think of being four or five years old when his mother would make him grilled cheese for lunch. Back then, though, grilled cheese was little more than Wonder bread and non-vegan Kraft singles.

Fortunately, grilled cheese has come a long way since the 1970s. To get it right, start by making sure the bread you’re using isn’t too thick or the cheese won’t get hot enough to melt. Check the crust, too. “I prefer a soft-crust bread for my grilled cheese so it’s easier to bite into once it’s cooked,” Suchman says. If the bread’s crust is too hard before you cook it, it can be a challenge to eat once it’s been grilled. Then choose a vegan cheese that melts easily or else your bread will burn before the sandwich is done. Suchman prefers slices such as Violife Cheddar Style Slices or Miyoko’s Creamery Farmhouse Cheddar, but shreds can work in a pinch, too.

While you might be tempted to slather vegan butter on the outside of the bread, break that habit. Instead, use a light spread of vegan mayonnaise. Why? “It tastes better,” Suchman says. If you’re adding fillings to your sandwich, place them in the middle so that the sandwich is layered as bread, cheese, filling, cheese, bread. (Pro tip: if you’re using vegan meat like ham or bacon, cook it separately before adding it to the sandwich.) Then start cooking on medium-low heat so the bread toasts slowly and the cheese melts. Once it’s golden brown, flip it, and cover the skillet with a lid. If you’re cooking on a griddle, cover the sandwich with a pot lid to trap in heat and help the cheese melt.

Creative takes on a classic 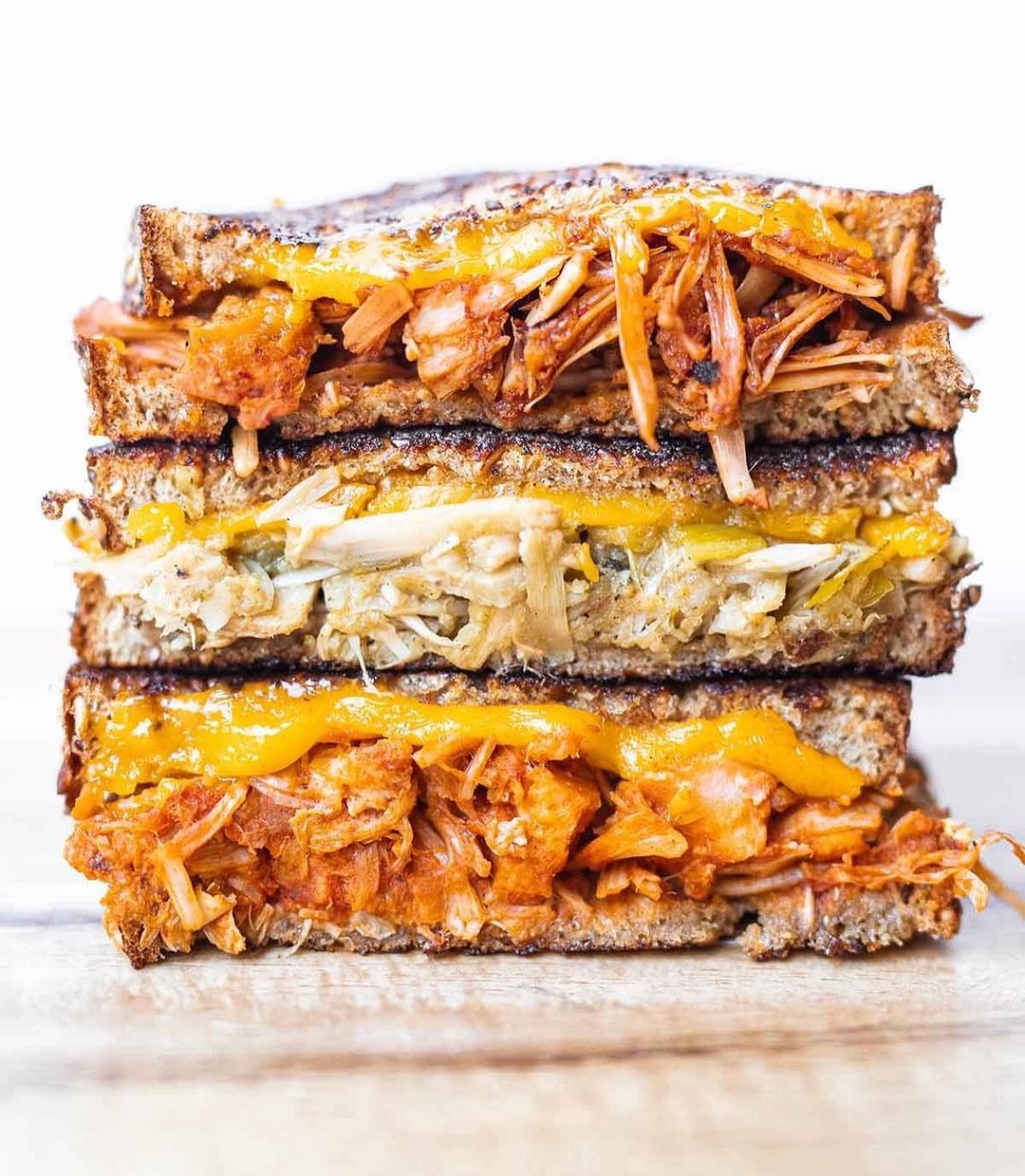 Can’t decide between chipotle, green chili, or buffalo jackfruit? Blogger Claire Slattery of Hell Yes It’s Vegan has you covered with three unique ways to add your preference of jackfruit to your grilled cheese.
Get the recipe 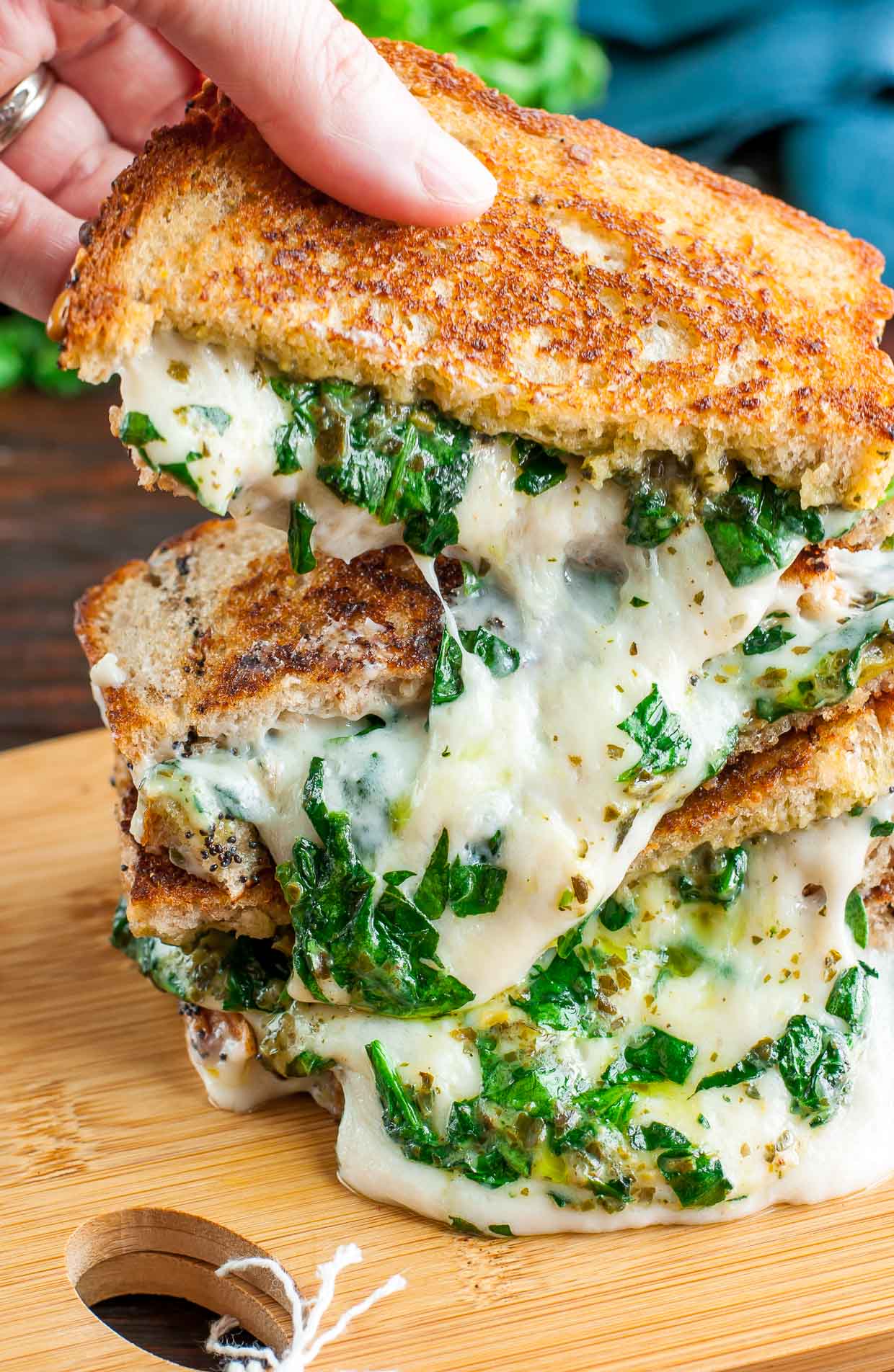 Turn your favorite appetizer into grilled cheese! This recipe from Jenn Laughlin of the blog Peas and Crayons will surely please that jalapeño-loving palate with this spicy twist.
Get the recipe 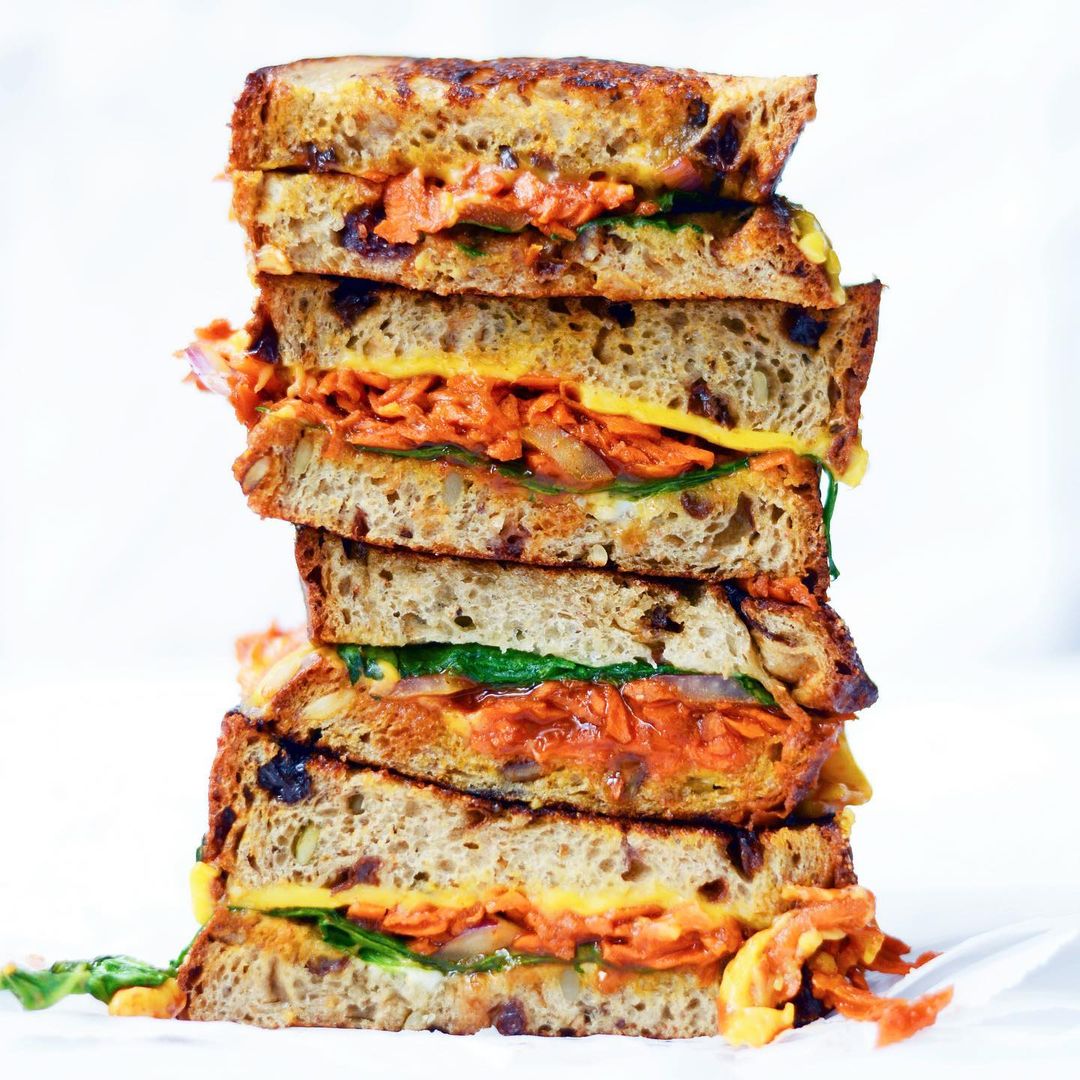 Simple is the name of the game with Ilene Godofsky Moreno of The Colorful Kitchen’s sandwich, which uses carrots and barbecue sauce. Slide in some spinach and red onion, and you’ve got yourself a tasty twist.
Get the recipe 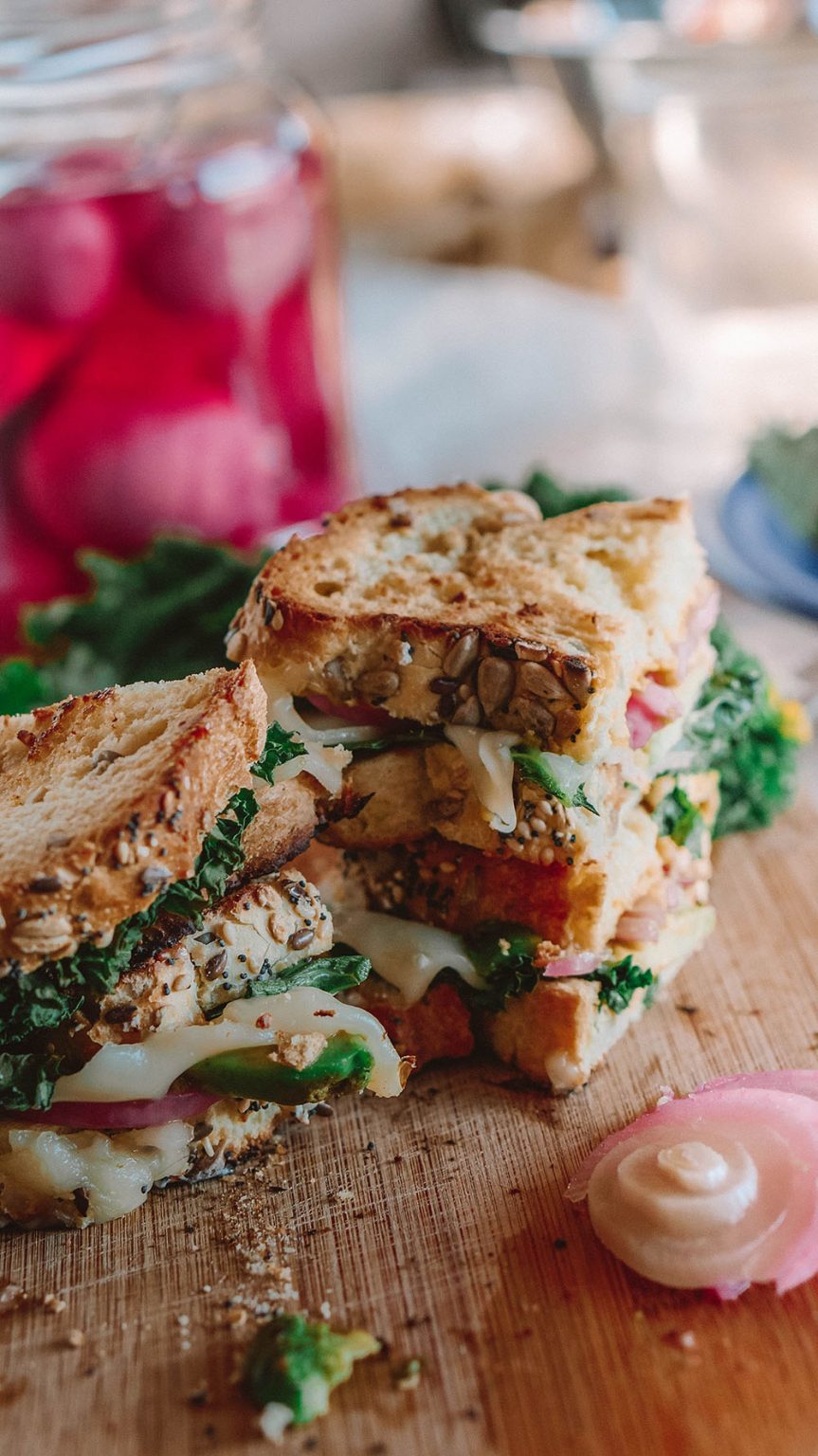 Avocado lovers, this one’s for you. Add some pickled onions, kale, and spices, and your grilled cheese just got a massive upgrade, thanks to Nicole Berth of When Sweet Becomes Healthy.
Get the recipe 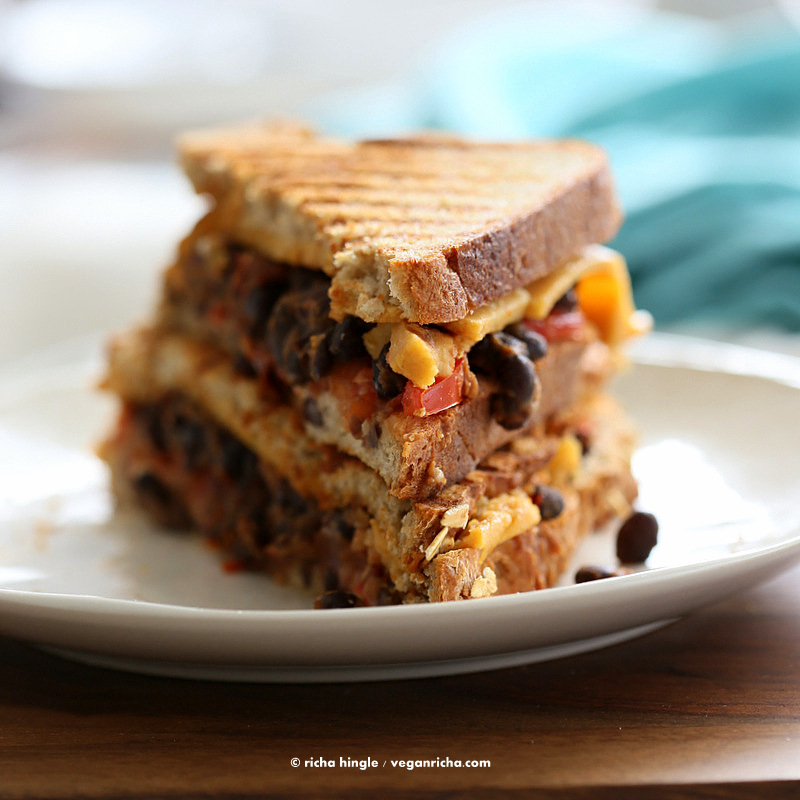 Count on blogger and author Richa Hingle of Vegan Richa to give those tastebuds something to write home about. Smoky black beans (or refried, if you prefer) may become your favorite add-in yet.
Get the recipe 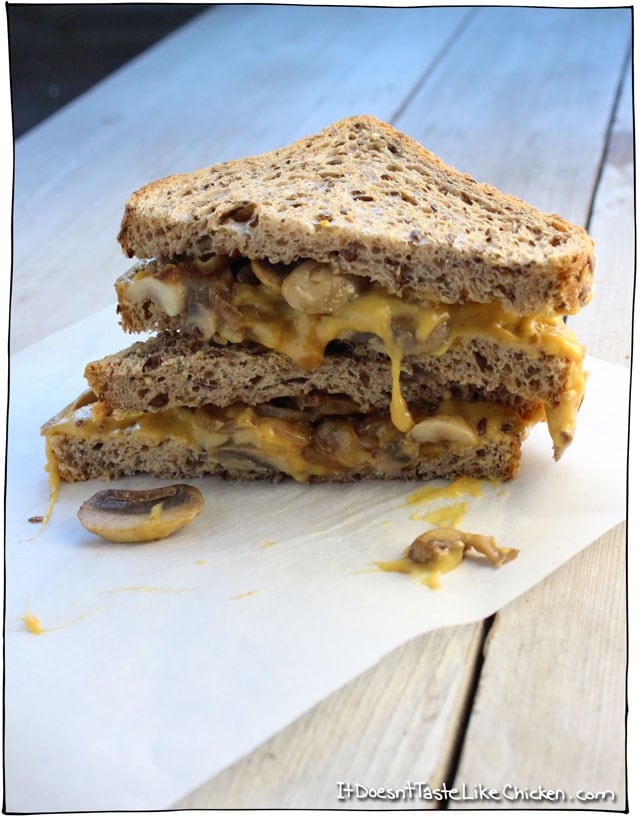 Got any health nuts who want to veg-ify their grilled cheese? Blogger and author Sam Turnbull of It Doesn’t Taste Like Chicken has your back with this savory onion-and-mushroom version.
Get the recipe 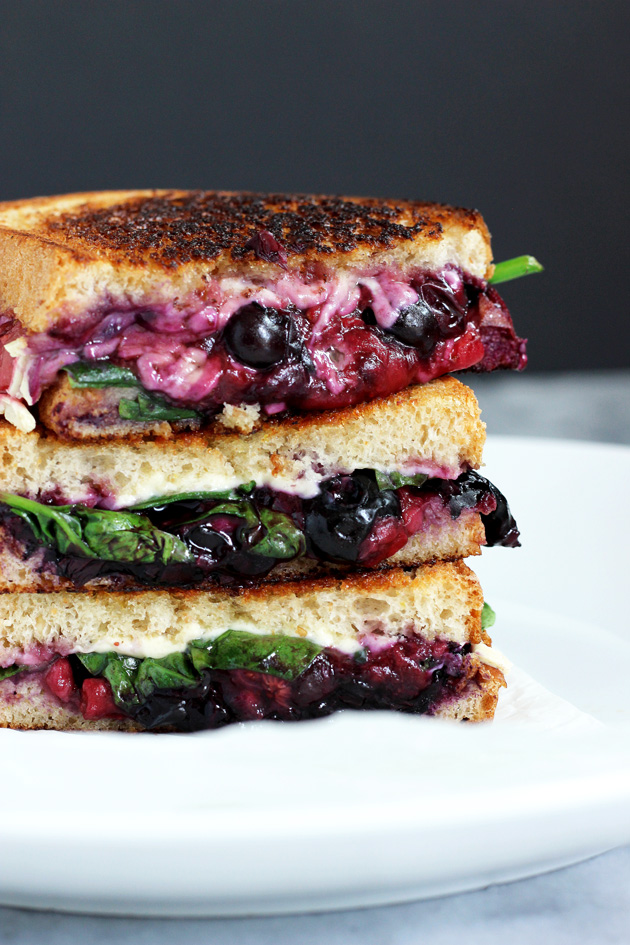 Holy grilled cheese! Jennifer Rossano of Neurotic Mommy is the brains behind this sweet berry-filled concoction. If there were Golden Globes for grilled cheese, this would surely be a winner.
Get the recipe 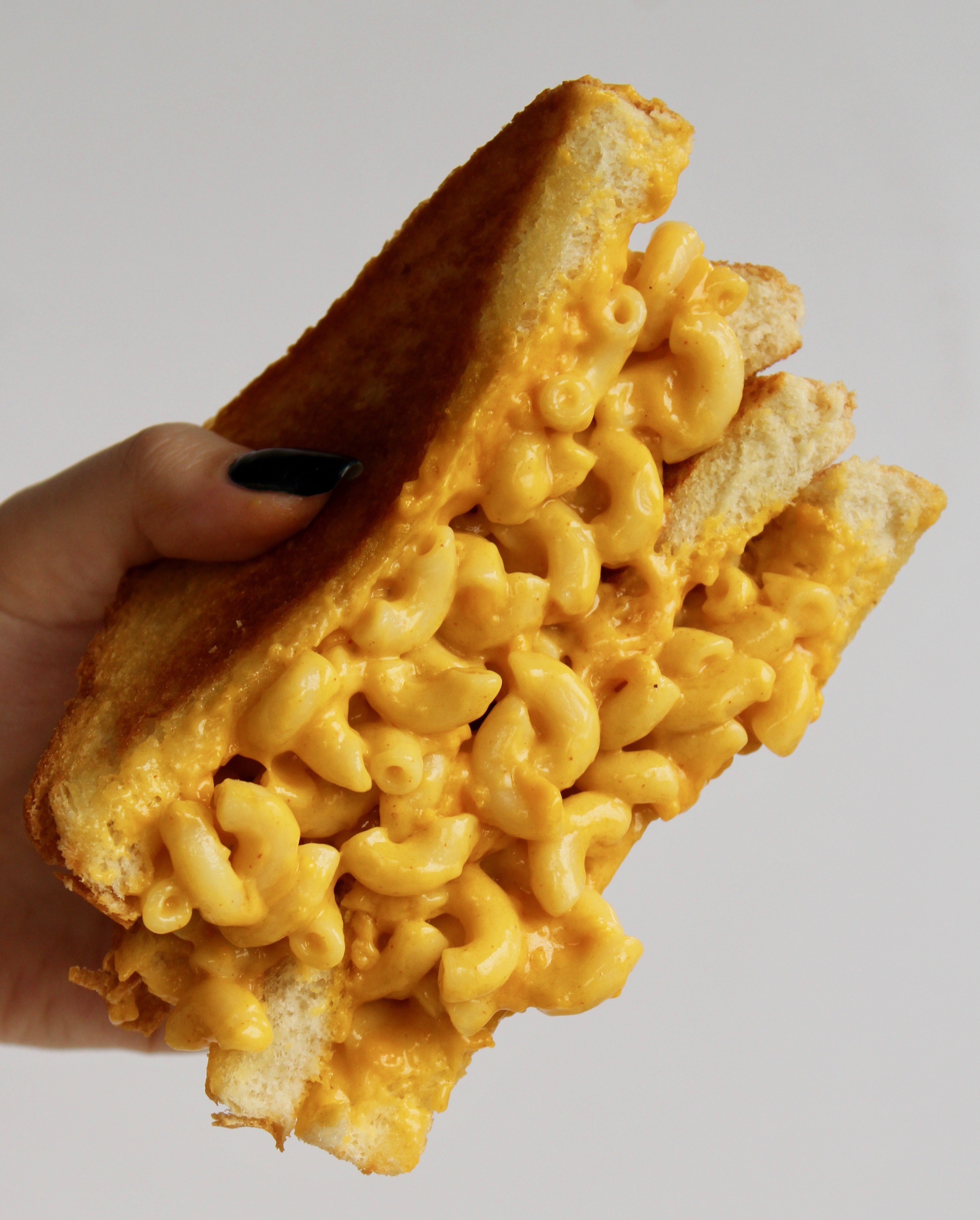 Yes, you really can add mac and cheese to anything, including grilled cheese. The sisters behind Six Vegan Sisters not only stuff their famous mac and cheese between two pieces of bread, but they also slather on more cheese for the ultimate cheesy comfort food.
Get the recipe 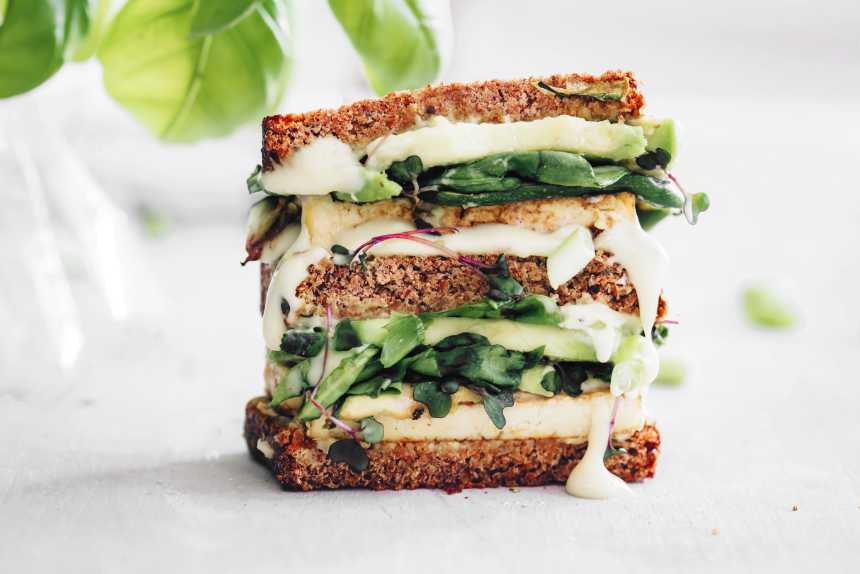 Health nuts, Alena of Nutriciously has created this one for you, as this healthified version is loaded with veggies like avocado, zucchini, and spinach. You’ll make your own cheese sauce before assembling and cooking the sandwich in a pan.
Get the recipe