Andrea Meza is the definition of a multi-hyphenate. In 2020, the activist and singer didn’t just become the third Mexican woman to win the coveted Miss Universe title, but this knock-out rabble-rouser has made history as the first-ever vegan to snag the crown.

But for Meza—whose feminist seeds were planted when she was a justice-seeking child growing up in Chihuahua, Mexico—being a beauty queen was never the dream; she had her heart set on being a doctor or an engineer. It wasn’t until her early 20s that Meza recognized the immense power she’d have to speak out for what matters if she were given access to one of the biggest platforms in the world—the universe, really—from which to advocate for radical social change.

If that doesn’t challenge any previously held beliefs about what a pageant winner looks like, try this on for size: Meza thinks mainstream beauty standards are downright ridiculous, pointing to the fact that it’s how we show up for ourselves and our shared planet, not how we appear physically, that defines true, lasting beauty. From animal rights to gender equity and women empowerment, the issues Meza has devoted her life to are both noble and necessary. And as long as she’s making her millions of onlookers, as she says, “uncomfortable” (a task she does not take lightly), she knows she’s winning—and it is that success that reaps rewards far greater than any sash can provide. VegNews’ Jasmin Singer caught up with Miss Universe to discuss tacos, criticism, and self-love. 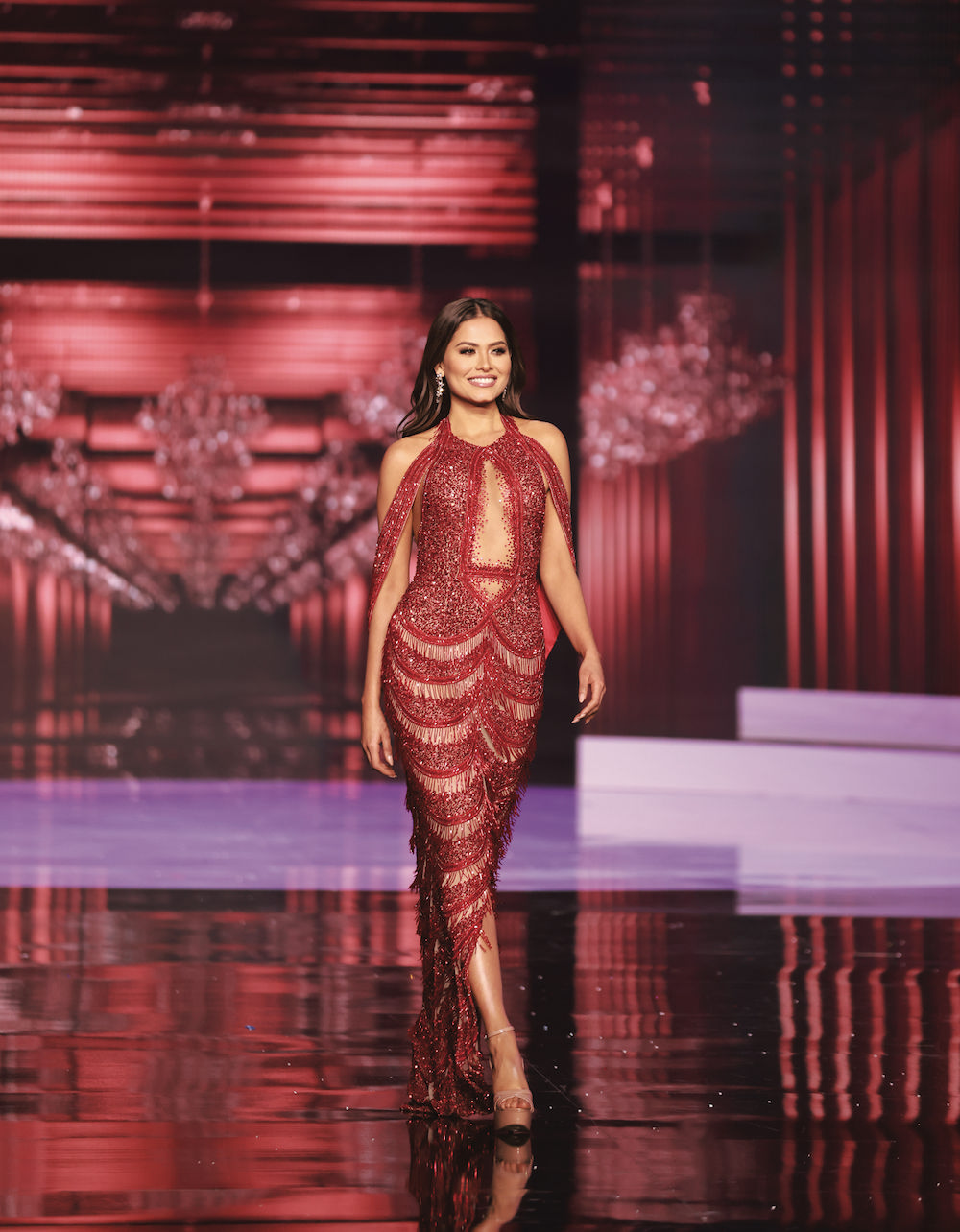 VEGNEWS: When did your vegan journey begin?

Andrea Meza: Two years ago, my life brought me to a point where I couldn’t stand eating animals anymore. I didn’t know anything about veganism, but one of my closest friends is vegan, so I was learning a little bit from her. I feel like when you’re not ready to make the change in your life, you just refuse to accept the reality. I was preparing chicken, and I couldn’t eat it anymore. So I was vegetarian for about two months, and then after watching the documentary The Game Changers and reading a little bit about veganism, I was like, “Okay, I’m ready to make the change.”

VN: How do you plan on using your platform to spread the word about veganism?

VN: Why is fighting gender-based violence important to you?

AM: I come from a country that has been violent toward women, especially within my state. I’m from the state of Chihuahua—and, sadly, it’s known for the violence that women suffer. I grew up knowing that women were disappearing. I grew up with a fear of going outside by myself. My sister became a feminist before I did, and she motivated me. She said, “This culture that we’re living in, just because it’s our normal doesn’t mean that it’s right.” Around five years ago, I was already into pageants, and I thought, there are people listening to me, and I can use this platform to talk about important topics—issues that are happening here in my country. And not only in Mexico, but all around the world. So that’s what I’ve been doing.

“Feel comfortable with who you are and how you look, and that’s going to take you further than comparing yourself to others.”
—Andrea Meza

VN: How do you deal with backlash?

VN: Why do you believe it’s important for society to move away from rigid beauty standards?

AM: Because they’re harmful. They are telling society and little girls that they have to be a certain way to be beautiful or to be worthy. When I was younger, I would look at these top models, and obviously, I admired them and all the former Miss Universe winners. They inspired me. But at the same time, when I started this, I had a lot of trouble accepting myself just the way I was. I wanted to fit into a certain size. I wanted to have hair just like the people on TV or in magazines. No matter what I did, it was never enough. It’s very sad to live life feeling that you are not enough. At the beginning, I was comparing myself to everyone. Now that I’m here, I want to let girls know that they shouldn’t listen to outside comments, and they shouldn’t pay attention to how other girls look on social media. Feel comfortable with who you are and how you look, and that’s going to take you further than comparing yourself to others. 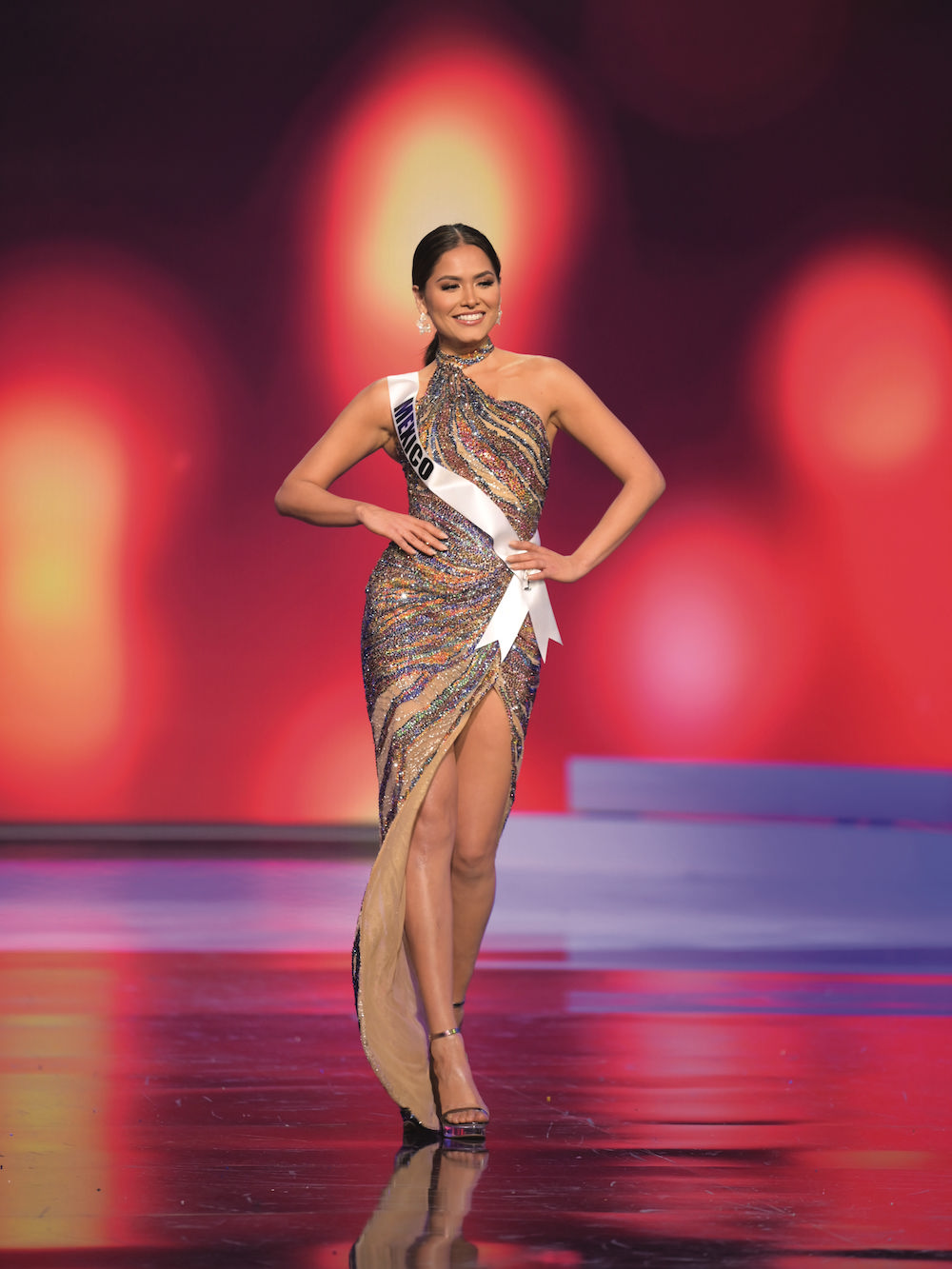 VN: How do you stay so positive?

AM: I remind myself every day of my amazing job and the important duty I have as Miss Universe and a public figure trying to make a change in a way that keeps me moving forward and inspired. When I’m super tired, when I’ve been working nonstop and haven’t had a weekend to just have a good rest, I might start to complain a little. But I keep reminding myself that I’m living my dream. And I try to maintain a balance so everything isn’t about work.

VN: What kinds of shifts do you hope to see in terms of creating a kinder world?

AM: I hope that governments and health institutions start acknowledging that we don’t need animal products, [that we have] plant-based products. I know that it’s hard, but it’s achievable. And I know it’s asking for too much, but I wish that in the future, the big supermarkets go all-vegan.

VN: What was your relationship with animals growing up?

AM: Growing up, my family had a farm. And if the chicken, eggs, or meat I was eating came from the farm, I would not eat it. If I’d met the cow or the chickens, I would not eat them. I refused because it made me sad to know where they were coming from. Then, when I grew up, I started ignoring it and stopped thinking about the animals. That’s why I feel as though my life led me to eventually be vegan, because at the beginning, I was like that.

VN: And what kinds of foods did you grow up eating?

AM: I would eat all kinds of foods. Tacos—you know, I’m Mexican so I used to love tacos. I make vegan tacos now. Ceviche, which is very popular in my country; now I have a vegan recipe, too. All the Mexican dishes—pozole, tamales, those were all my favorites. But my mom would always prepare a lot of veggies. I grew up eating veggies, so for me, it was not a difficult thing to make the transition.

VN: What is your favorite part about being vegan?

AM: Knowing that I’m contributing to saving our world. I believe that this lifestyle is the best way to contribute to stopping climate change. It’s a difficult task, but we should all be doing something about it.

For more interviews with vegan changemakers, read:
Why Tabitha Brown Never Loses Sight of Her Faith, Family, Or Veganism
Joaquin Phoenix on Veganism, The Environment, and Social Justice
The Korean Vegan’s Debut Cookbook Is an Education in Acceptance