The happiest place on earth isn’t too happy when you’re starving. In fact, a vegan at Disneyland (or the neighboring California Adventure and Downtown Disney) can turn Grumpy in the grips of hunger pangs while being surrounded by others happily indulging in Mickey Mouse-shaped treats. Thankfully, Disneyland has followed in the footsteps of its Florida cousin and expanded its plant-based options to include delicious treats beyond giant pickles and apple slices. Disney’s mission is to make their guests’ wishes come true—including vegans—so lace up, don a pair of Mickey ears, and enjoy your day to the fullest.

Note: this guide specifically addresses Disneyland. You’ll need a separate ticket for neighboring California Adventure, though there are plenty of year-round and seasonal vegan eats there as well. 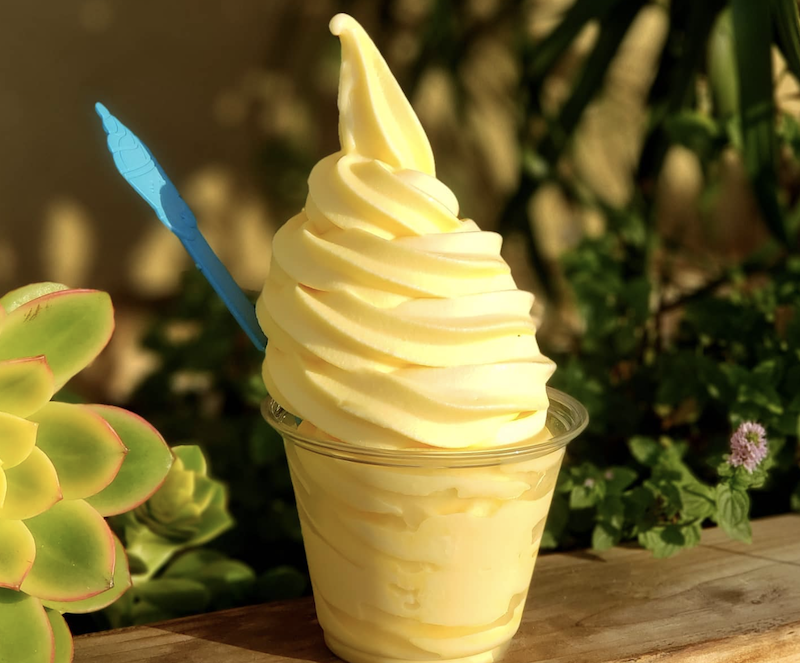 In regards to vegan eats at Disney, the Dole Whip is legendary. The classic pineapple-flavored frozen treat is a sorbet with the light-and-creamy consistency of soft serve. The accidentally vegan recipe consists of pineapple juice, stabilizers (for texture), and water. It’s pumped out of a soft-serve machine to make gravity-defying swirls. Unlike other frozen confections, Dole Whip is exclusively sold from the tiki hut just outside the Enchanted Tiki Room, which means the line will be long on any given sunny California day. Pro tip: enter the waiting corral for this attraction and order your whip from the back side of the hut—few people know you can order from this side. The whip is served in a cup or as a refreshing Dole Whip Float (Dole Whip served over pineapple juice and topped with a bright red maraschino cherry). You may notice other fruity Dole Whip flavors such as watermelon, mango, raspberry, orange, or cherry. All of these fruity flavors are vegan as well.

If you’re not a Magic Key holder, you’ll arrive at the park early and zip down Main Street to get in line for Space Mountain—that’s the best trick to get your ticket’s worth. Day pass guests simply don’t have the luxury of time to dawdle. However, if you need something in your stomach before traversing multiple miles through queues, Main Street does have a charming Starbucks to get you going. 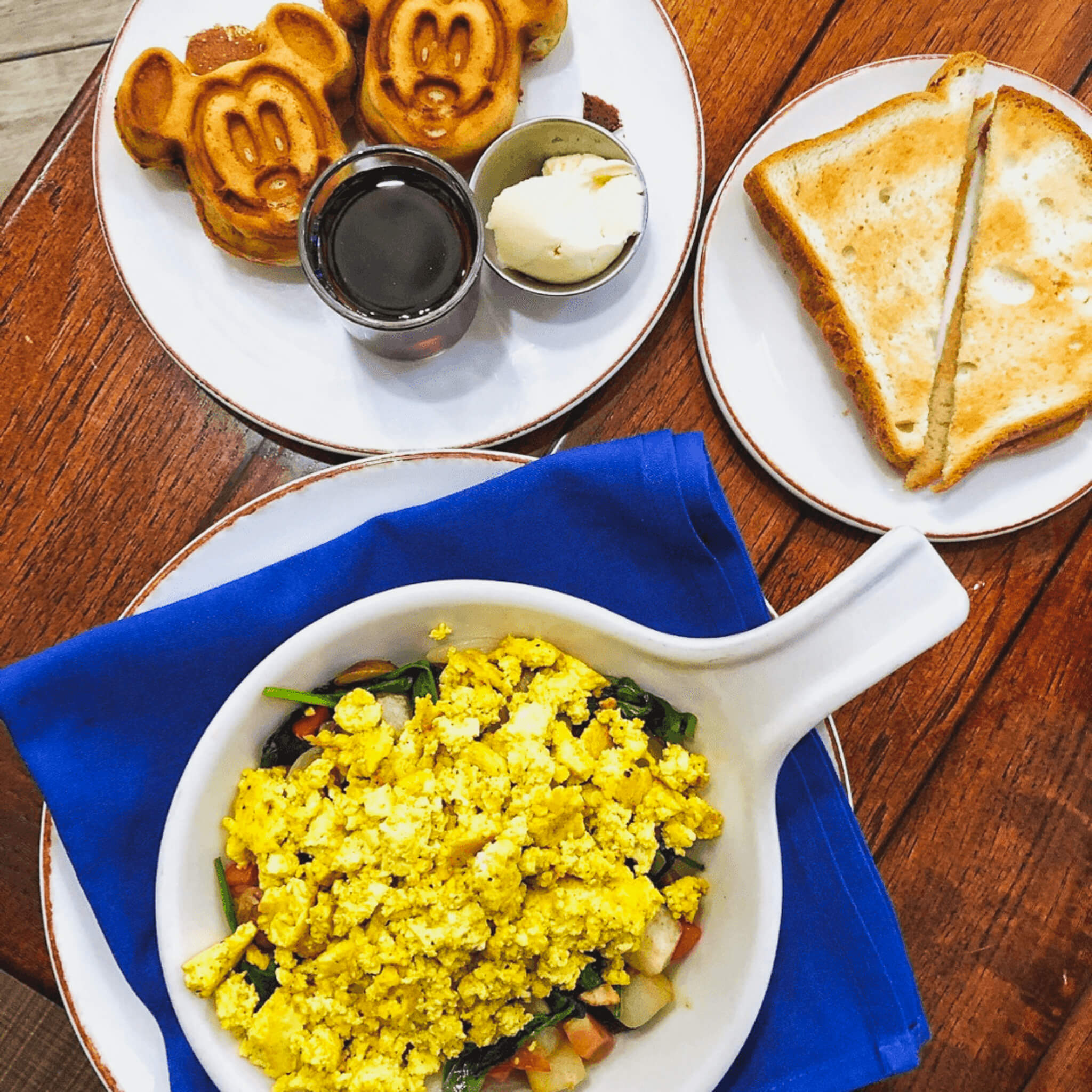 Interested in dining with Mickey and Minnie? Make a reservation for the character breakfast at the Plaza Inn. The meal is served buffet-style, but you can let them know ahead of time (or politely inform your server) that you are vegan. The kitchen is equipped to make vegan versions of the famous Mickey Waffles as well as tofu scramble, breakfast potatoes, and fruit.

For lunch or dinner, swing by Carnation Cafe for a vegan bean burger, garden salad, or brownie à la mode.

Disneyland’s most far-out and hyped-up land is also home to one of the most buzzed-about vegan options in the entire theme park: the Ronto-less Garden Wrap. Omnivores have even deemed it tastes better than the animal meat-based Ronto Wrap. This cult menu item is made with seasoned Impossible meat, kimchi slaw, gochujang sauce, and crunchy pickled cucumber wrapped in a hot pita. We suspect there may be a sprinkle of pixie dust on there, too, to make it taste so magical. 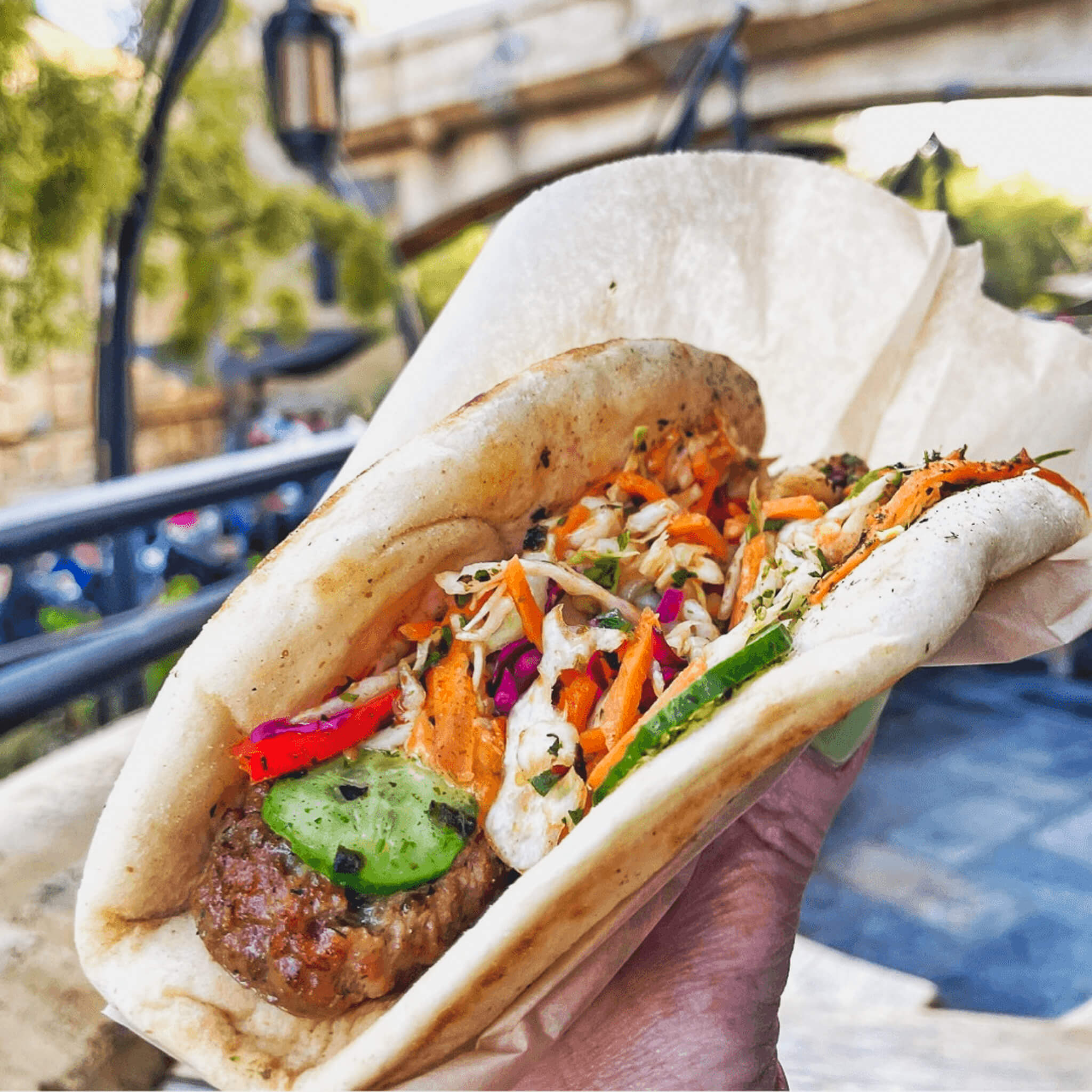 Galaxy’s Edge is also the only place in Disneyland that serves alcohol—besides the elite Blue Bayou restaurant. At Oga’s Cantina, you can get a spiked Blue or Green Milk—both are vegan by default. Those under 21 can enjoy the non-alcoholic version of these sweetened coconut milk beverages. Snacking-wise, head to Kat Saka’s Kettle for brightly hued popcorn to match those neon drinks. Flavors may rotate, but they remain vegan to date.

Famished after spending over an hour waiting for Space Mountain? Alien Pizza Planet (formerly Pizza Port as a nod to Toy Story) offers a dedicated vegan option by way of the Impossible bolognese pasta. 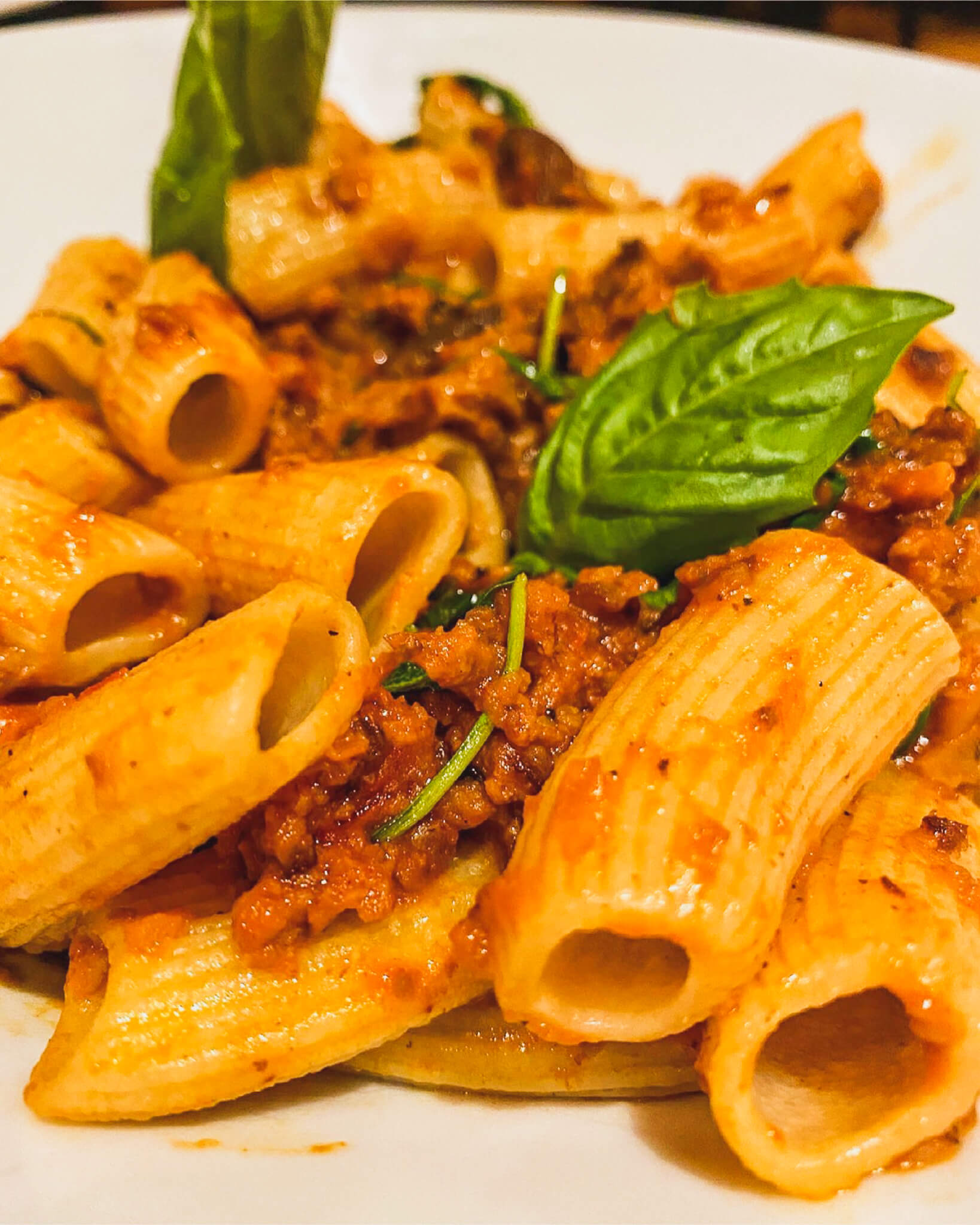 The meaty vegan pasta is mixed with seasonal vegetables and topped with vegan cheese. While not on the menu, the kitchen can make a personal-sized, gluten-free, and vegan cheese pizza, though honestly speaking, it tastes like an afterthought.

Square footage-wise, these lands are on the smaller side, which is why we’re addressing them together. Granted, you can spend a good deal of time in each, depending on wait times (Peter Pan really does take at least half an hour, but the nostalgia factor is worth it).

Both Fantasyland and Toon Town are home to the most family-friendly attractions at Disneyland, including the famous teacups and Dumbo ride. 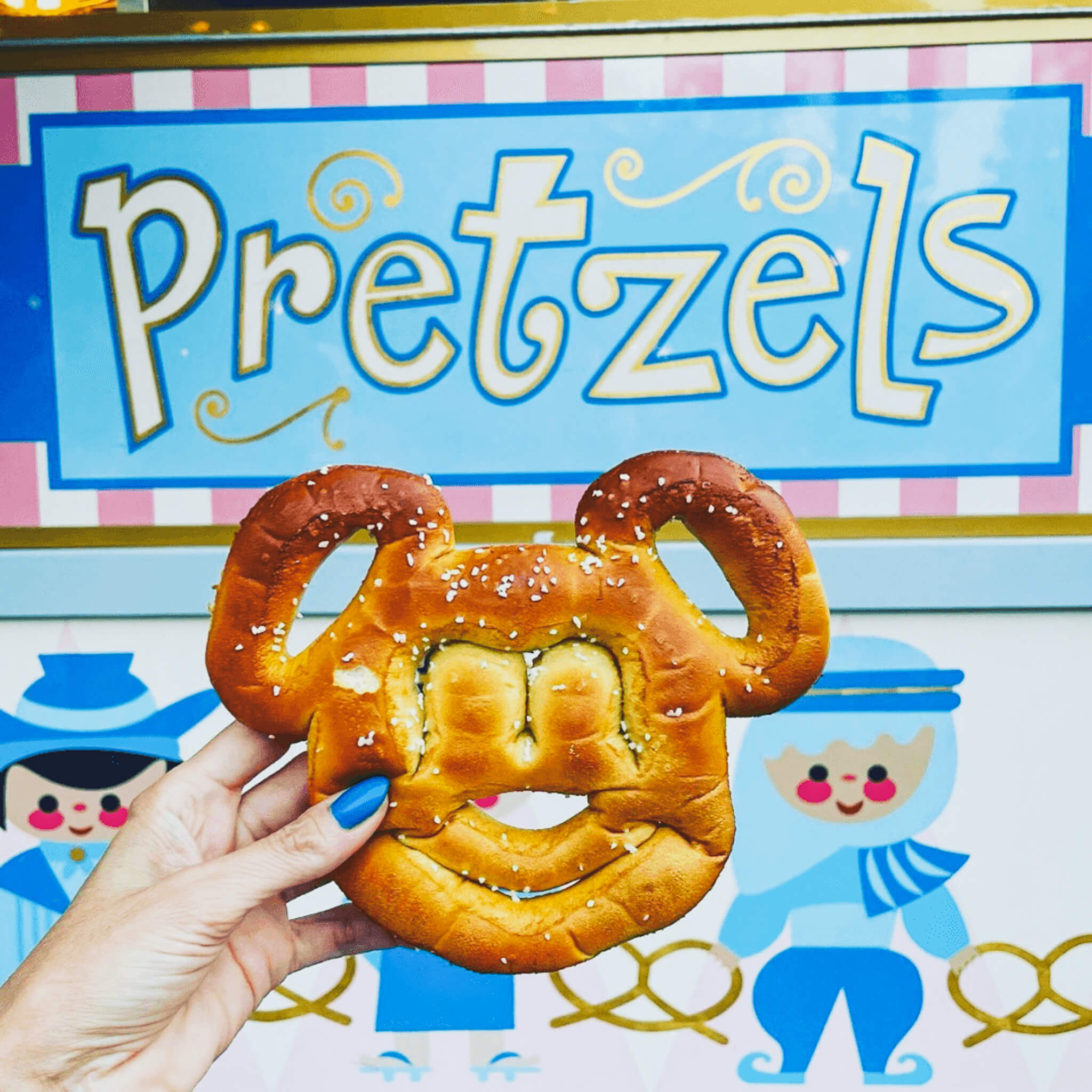 Snack carts full of hot and salted Mickey pretzels, popcorn, and accidentally vegan frozen confections can be found throughout these two lands, but if you’re looking for a full meal, head to Fantasyland for the Red Rose Tavern.

The quick service concept offers breakfast, lunch, and dinner with menus scheduled throughout the day. The breakfast menu includes a Little Town Harvest Bowl—essentially a grain bowl of quinoa, vegetables, and plant-based aioli. The Enchanted Cauli-flower Sandwich is the plant-based offering for the lunch and dinner crowds. Beverages (soft drinks and tea) served in a multitude of themed souvenir cups are also available.

After you’ve ridden “the wildest ride in the wilderness” and screamed “Goat!” after careening down a canyon (it’s a thing), satisfy your hunger at Rancho del Zocalo Restaurant. The breezy eatery is somewhat tucked away from the traffic of park guests, making it a nice, shady respite. Take a breath and tuck into the Cauliflower Tacos with Mexican rice and vegan refried beans. The Cinnamon Crisps and Crispy Chips con Limon are also vegan-approved. If you’re just looking for something to tie you over, a bag of chips, some salsa, and a bowl of refried beans is an excellent and hearty option. 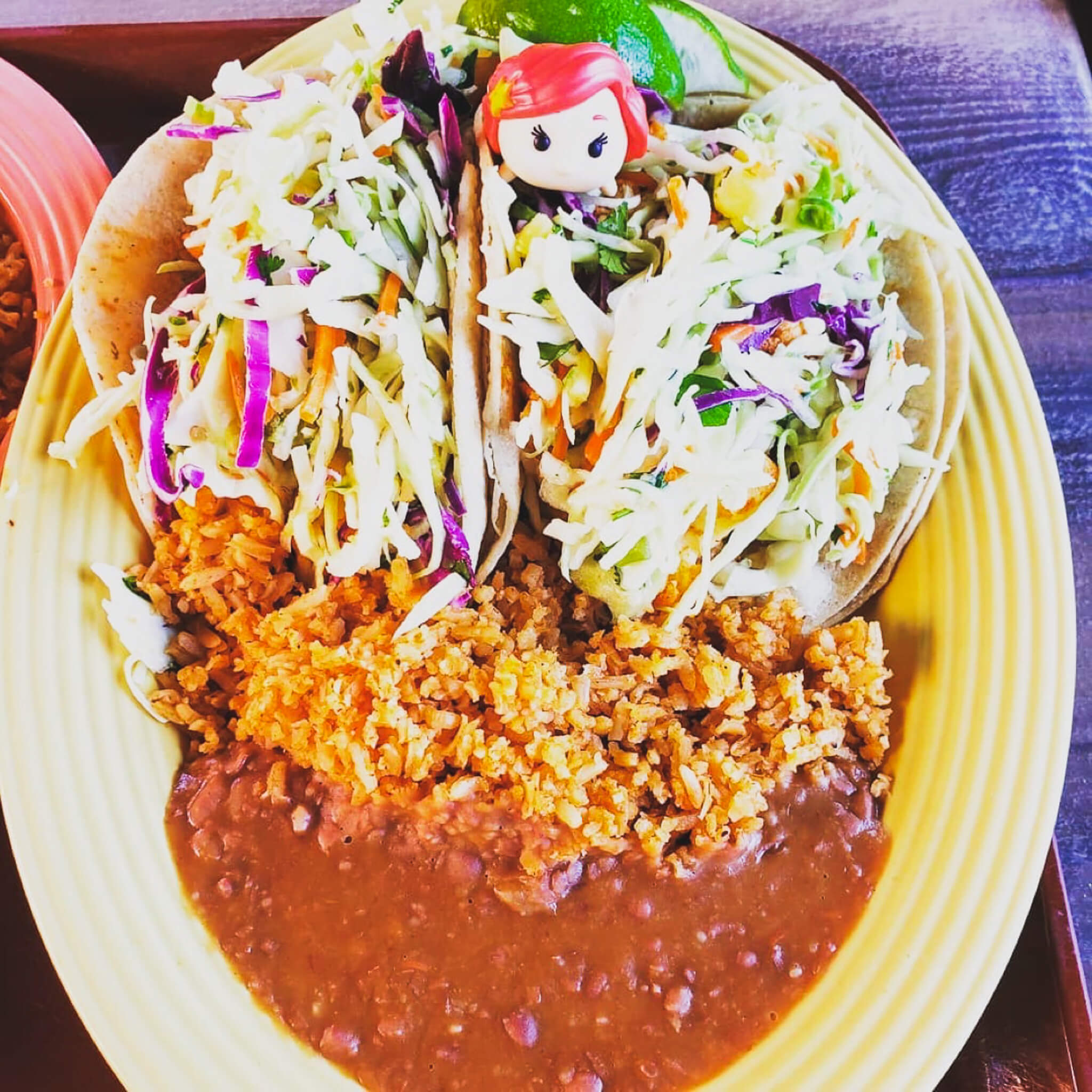 Those in search of a more authentically Frontierland meal can step right on up to the Golden Horseshoe. The plant-based menu item here launched in the summer of 2022, and it features Impossible Chili Cheese Fries. The more casual, quick-service Stage Door Cafe also carries these fries.

Pro tip: wherever you choose to dine, do it after riding Splash Mountain. Now thoroughly soaked (yes, you will get wet), you could grab an Impossible Cheeseburger and fries at the Hungry Bear Cafe, or you could enjoy a more vegetable-forward meal at Cafe Orleans. The French-inspired menu offers a vegan white bean hummus served with crudites and charred bread for an appetizer as well as a vegan ratatouille main and an astounding plant-based crème brûlée (the latter is also found at the elegant Blue Bayou). You may not see this dessert on the menu, but ask and you shall receive. 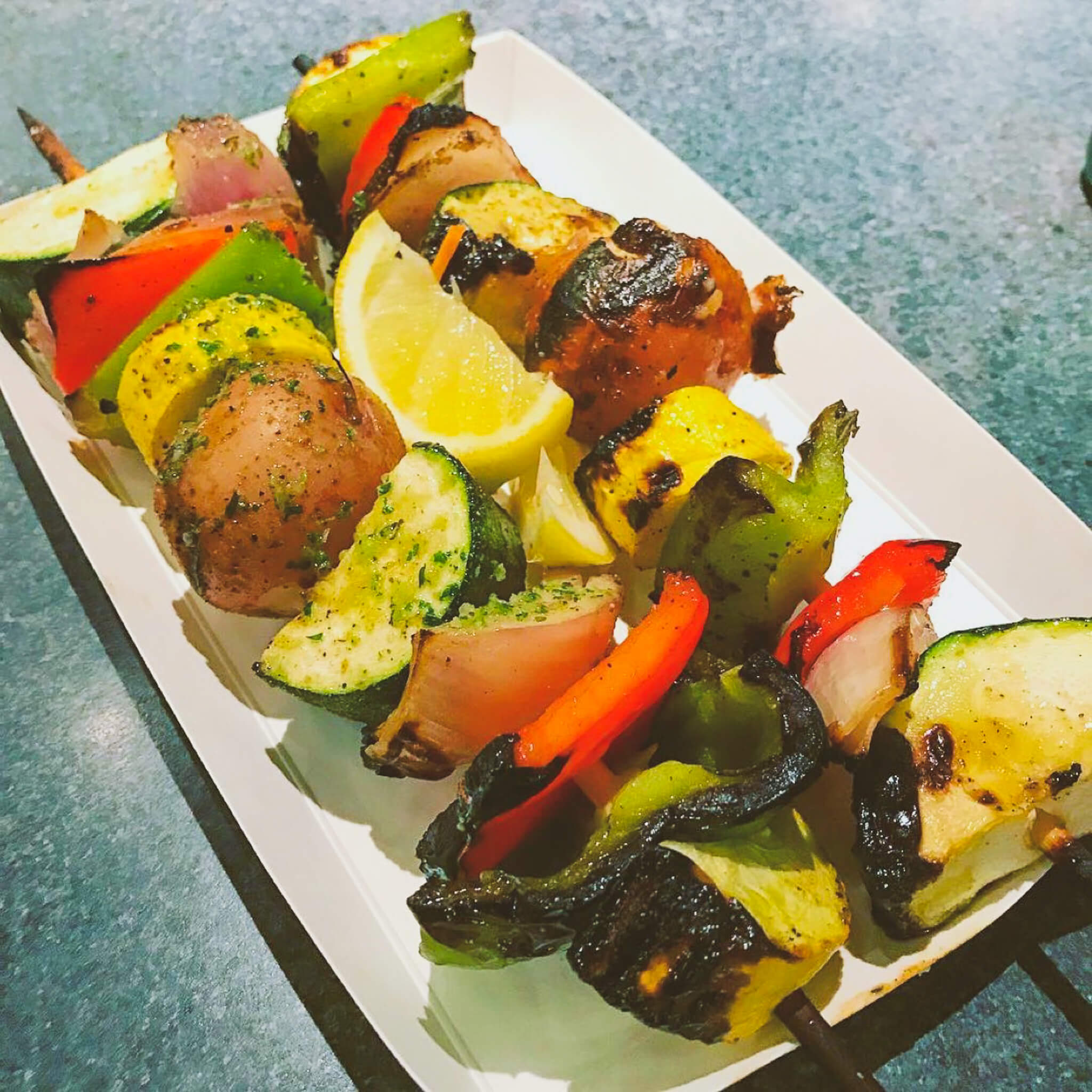 Craving more vegetables or a quick, easy bite? Bengal Barbecue offers a roasted vegetable skewer (note: it shares a grill with the meat options) and a Hummus Trio served with raw vegetables.

For a slower, take-your-time kind of meal, find a seat at River Belle Terrace. In the mornings, the menu offers a plant-based avocado toast. Lunch and dinner options range from Corn on the Cob Succotash, barbecue tofu with roasted vegetables, and a seasonal fruit cobbler with non-dairy ice cream. 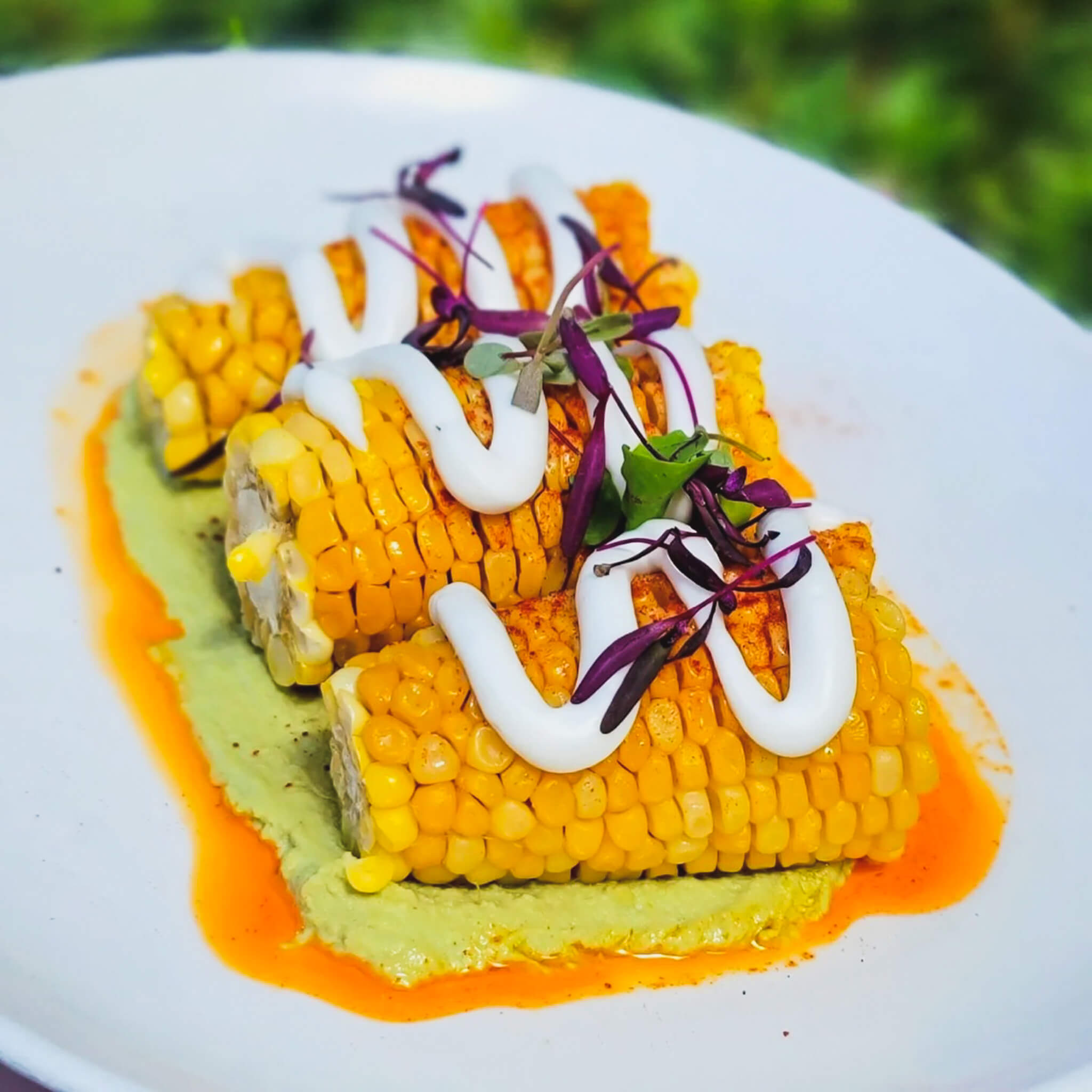 To end the day with a bang, make reservations way, way in advance for a coveted seat at the Blue Bayou—the fine dining restaurant within the Pirates of the Caribbean ride. You’ll sit down to a three-course vegan menu complete with a Hearts of Palm Escabeche appetizer, Fava Bean & Pistachio Pesto Pasta main, and a delectable vegan crème brûlée served with macerated berries for dessert. Like your park ticket, this meal comes with a considerable price tag, but the experience is worth it at least once.

Disneyland hosts a plethora of strategically stationed snack carts throughout the park, each specializing in a specific craving. There are popcorn carts (yes, the popcorn is vegan), frozen delight carts, pretzel carts, and produce carts. These grab-and-go options are ideal for the Disney power guest—someone with boundless energy, a strong back, and solid walking shoes who intends to spend every second of their day seeing all Disneyland has to offer by way of attractions. Fuel your enthusiasm with a salted Mickey-shaped pretzel, cool off with a chocolate-covered frozen banana or Frozen Strawberry Lemonade bar, and nourish yourself with a giant pickle or fresh fruit from a produce stand. 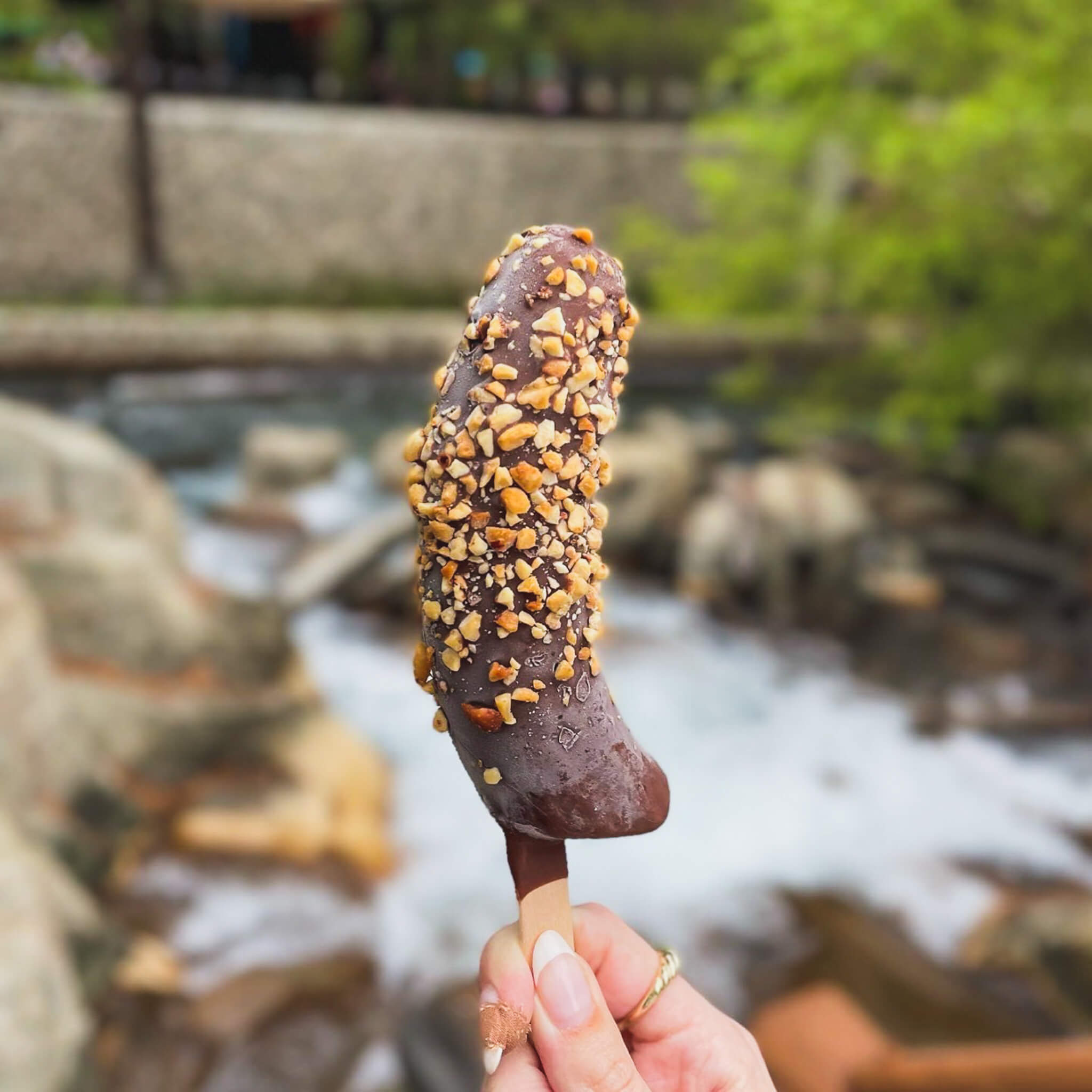 Hold tight to your Mickey ears headband! It’s going to be a gloriously delicious and magical vegan day at Disneyland.