Look, we all know that burgers and hot dogs are barbecue must-haves. But, let’s not leave pulled pork sandwiches, ribs, and skewered meat out of the conversation, either. All of these meaty dishes deserve credit for making outdoor get-togethers so special. Whether you’re missing barbecue food or cutting back on meat, nowadays there are a plethora of plant-based meats on the market—including the aforementioned pulled pork, ribs, and kebabs. Here are some of our favorite vegan barbecue meat options, divided by type.

Pulled pork is a classic dish of the American South, particularly in the Carolinas where it’s colloquially known as just “barbecue.” But, it’s not the only shredded meat sandwich in the world. In Mexico, there are tingas, shredded chicken that’s served in a sauce made from tomatoes and smoky chipotle chilis in an earthy, spicy adobo sauce. Korean cuisine has tangpyeongchae, a dish consisting of shredded beef mixed with mung bean sprouts, watercress, nokdumuk (mung bean jelly), and thinly sliced red peppers. The list goes on, but as far as we’re concerned, all of them are welcome additions to the barbecue.

Try out our picks for plant-based shredded meat in these Smoky Vegan BBQ Pulled Jackfruit Sliders by Shay Brown, the author and recipe developer behind the blog Pretty Brown Vegan. We also recommend this Pulled Barbecue Jackfruit Sandwich With Grilled Pineapple by Linda and Alex Meyer, the mother/daughter duo that authored the cookbook Great Vegan BBQ Without a Grill. 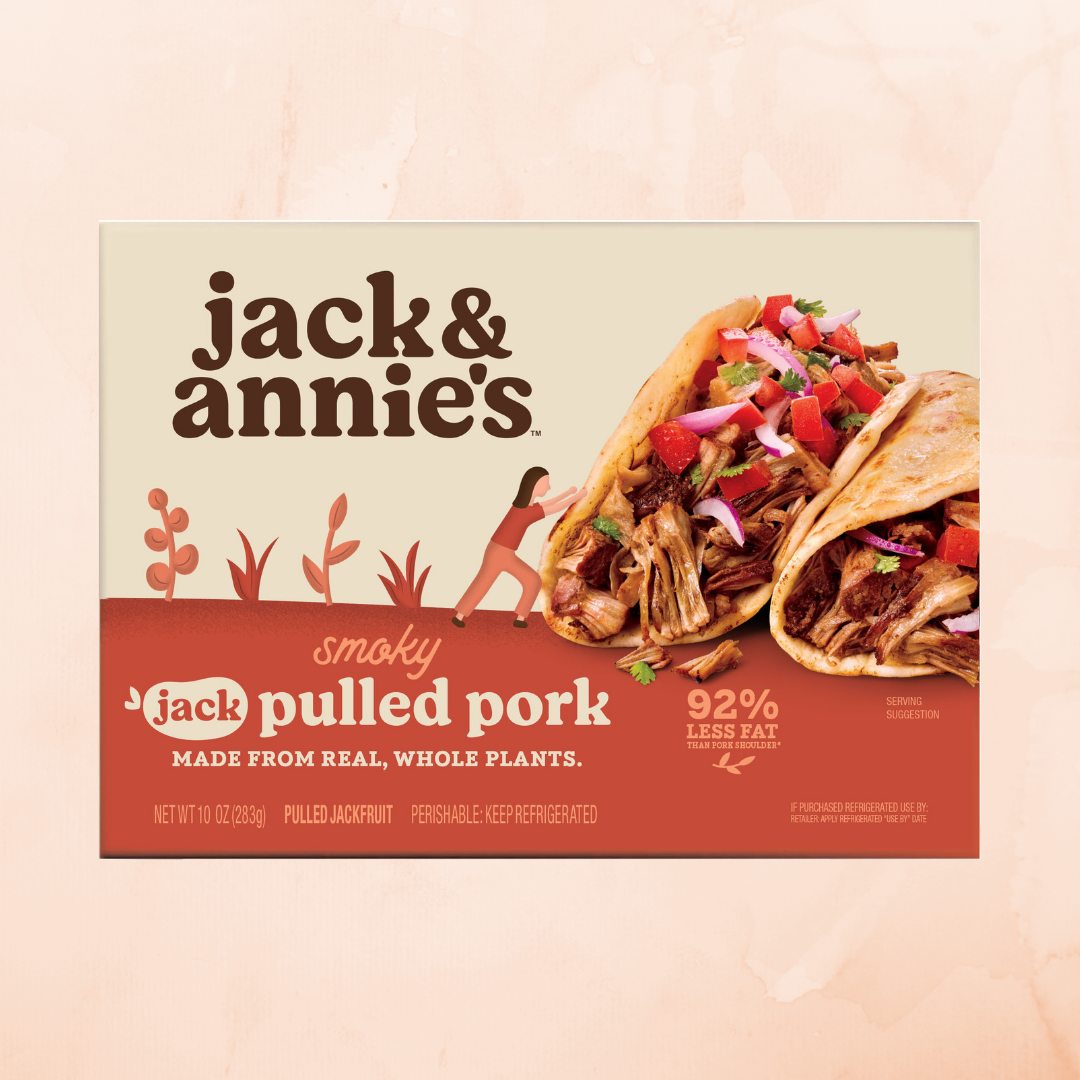 Jackfruit, an enormous, spiny fruit native to South and Southeast Asia, is beloved for its meaty texture. Not only does it make a scrumptious addition to Sri Lankan curries, but when you marinate it in a sweet, tangy, and savory barbecue sauce, you’ve got yourself one delicious pulled pork substitute. This Smoky Pulled Pork by Jack & Annie’s has a wonderfully smoky flavor that’s just begging to be served between a soft potato roll with plenty of crisp and crunchy vegan coleslaw.
FIND OUT MORE 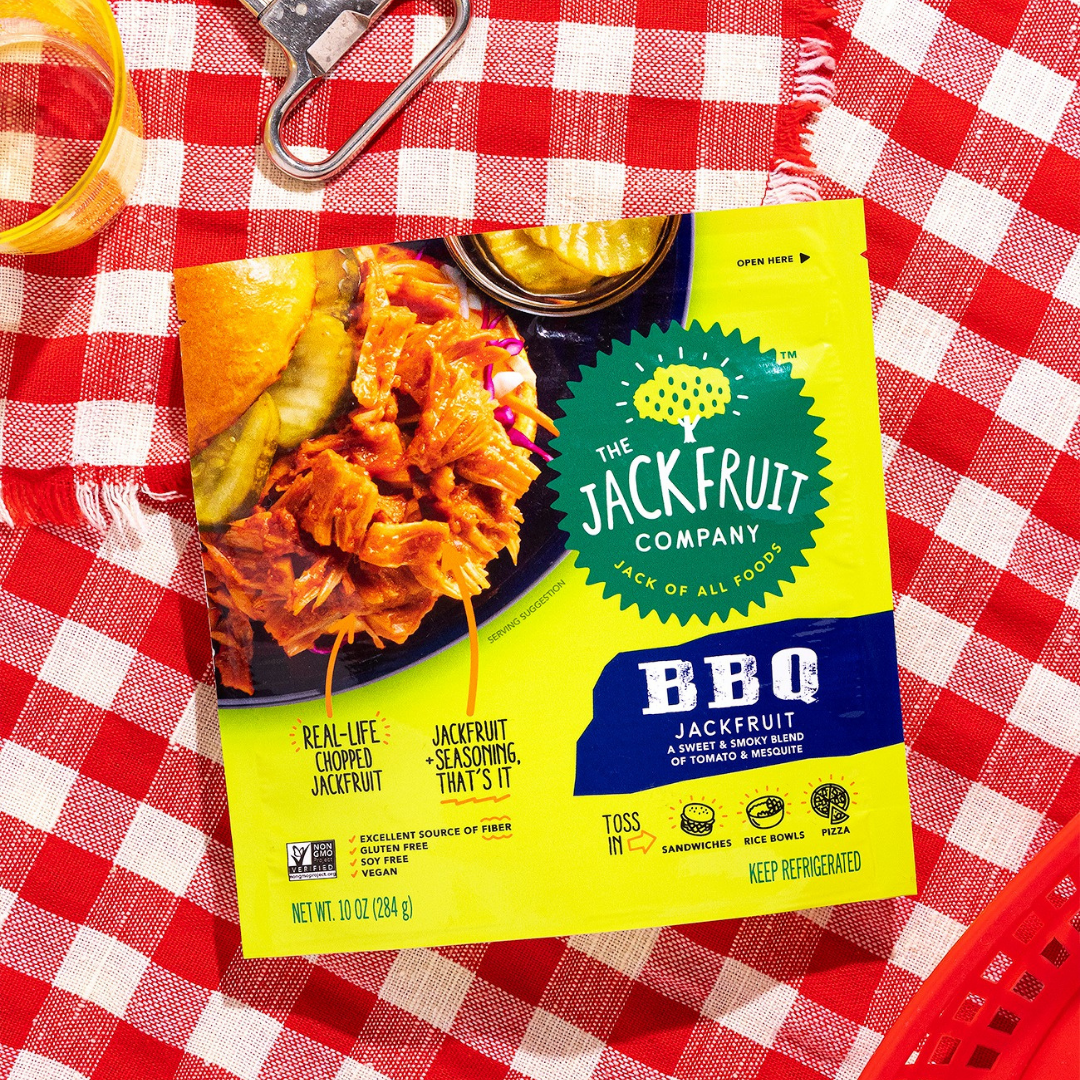 Variety is the spice of life, and of backyard barbecues, too. Boulder, CO-based brand The Jackfruit Company has you covered if you can’t (and won’t) settle for just one flavor of sauce. The company makes four flavors that are vegan pulled pork sammie-ready: BBQ, Tex-Mex, Jackfruit, and Curry. Have fun mixing and matching toppings to flavors. For Tex-Mex, try a spicy salsa. For Curry, offer a bowl of mango chutney to dollop on top.
FIND OUT MORE 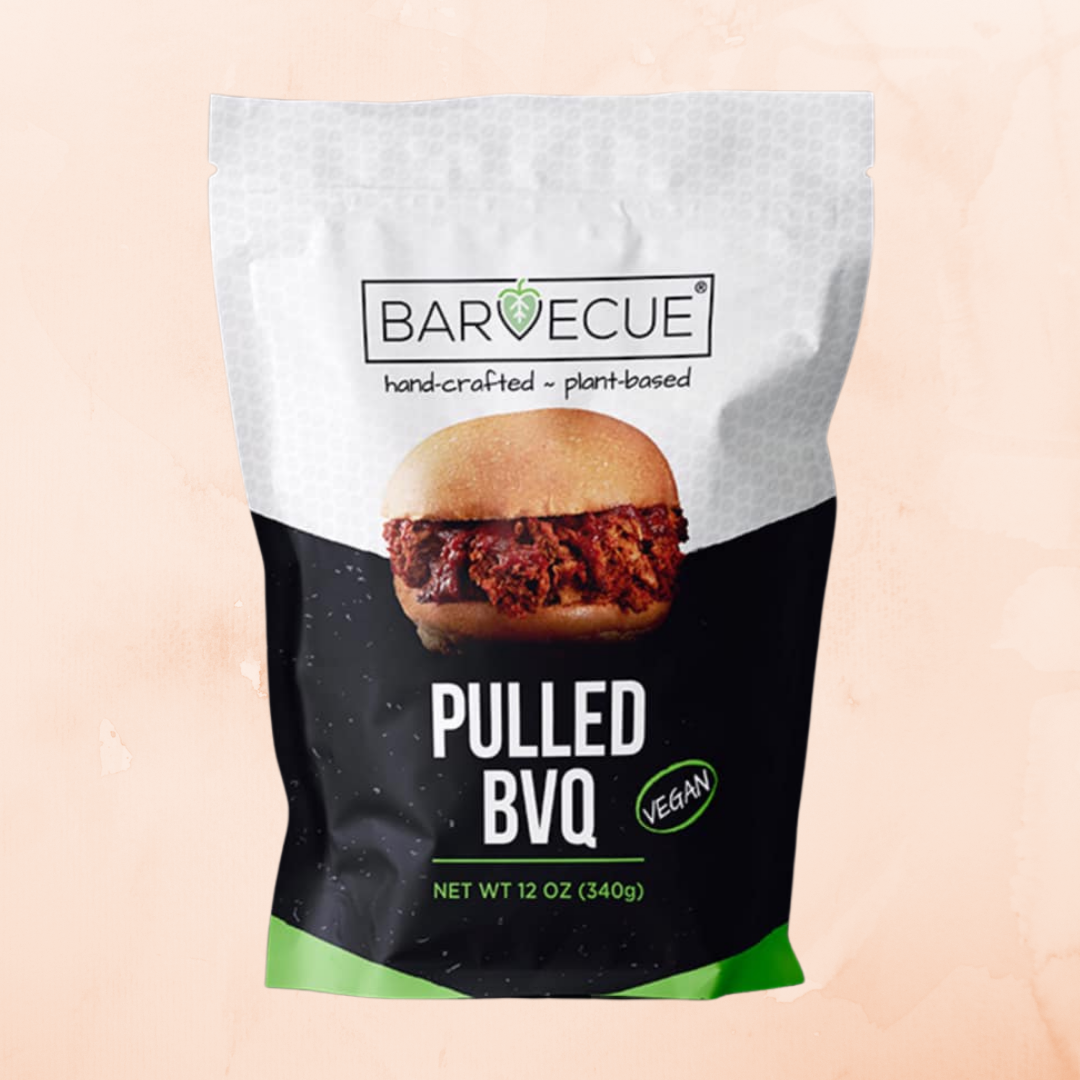 Looking for a vegan pulled pork that offers a little more protein? Barvecue, a family-owned plant-based meat brand founded in 2017, makes its two meatless pulled pork options from a blend of soybeans and sweet potato. The Pulled flavor, which is coated in a sweet barbecue sauce, offers 9 grams of protein per serving. But, if you would prefer to choose your own sauce, go with the Naked, which packs 10 grams of protein per serving.
FIND OUT MORE 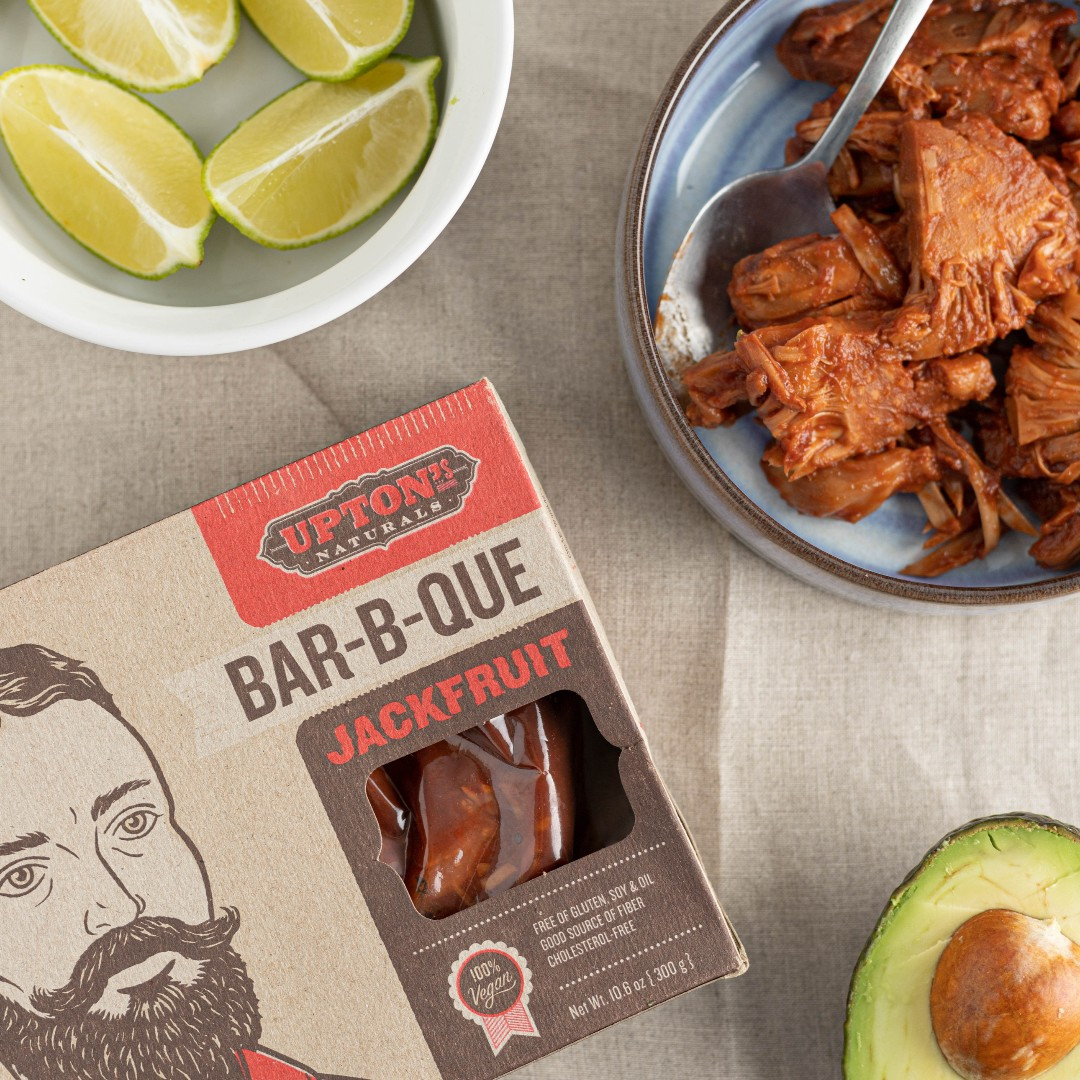 Tossed in a tangy barbecue sauce, the Bar-B-Que Jackfruit by Upton’s Naturals is enticing in sandwiches, in wraps, and even on top of a summery salad. The brand also makes a sauce-free Shredded Jackfruit version, if you’d prefer to customize it to your palate. It’s also shelf-stable, making it travel-friendly for shindigs at the park, beach, or in your friend’s backyard.
FIND OUT MORE

Ribs slathered in messy, sticky, but oh-so-delicious sauce are quintessential barbecue food. Traditionally made from beef or pork, there are a few options for vegan ribs that you can purchase online. Enjoy them with your favorite barbecue sauce and serve alongside grilled corn-on-the-cob and a tangy pasta salad. Want to make your own?

Check out the recipe Sweet and Sour Vegan Ribs from the Fusion Food in the Vegan Kitchen cookbook by Chef Joni Marie Newman. 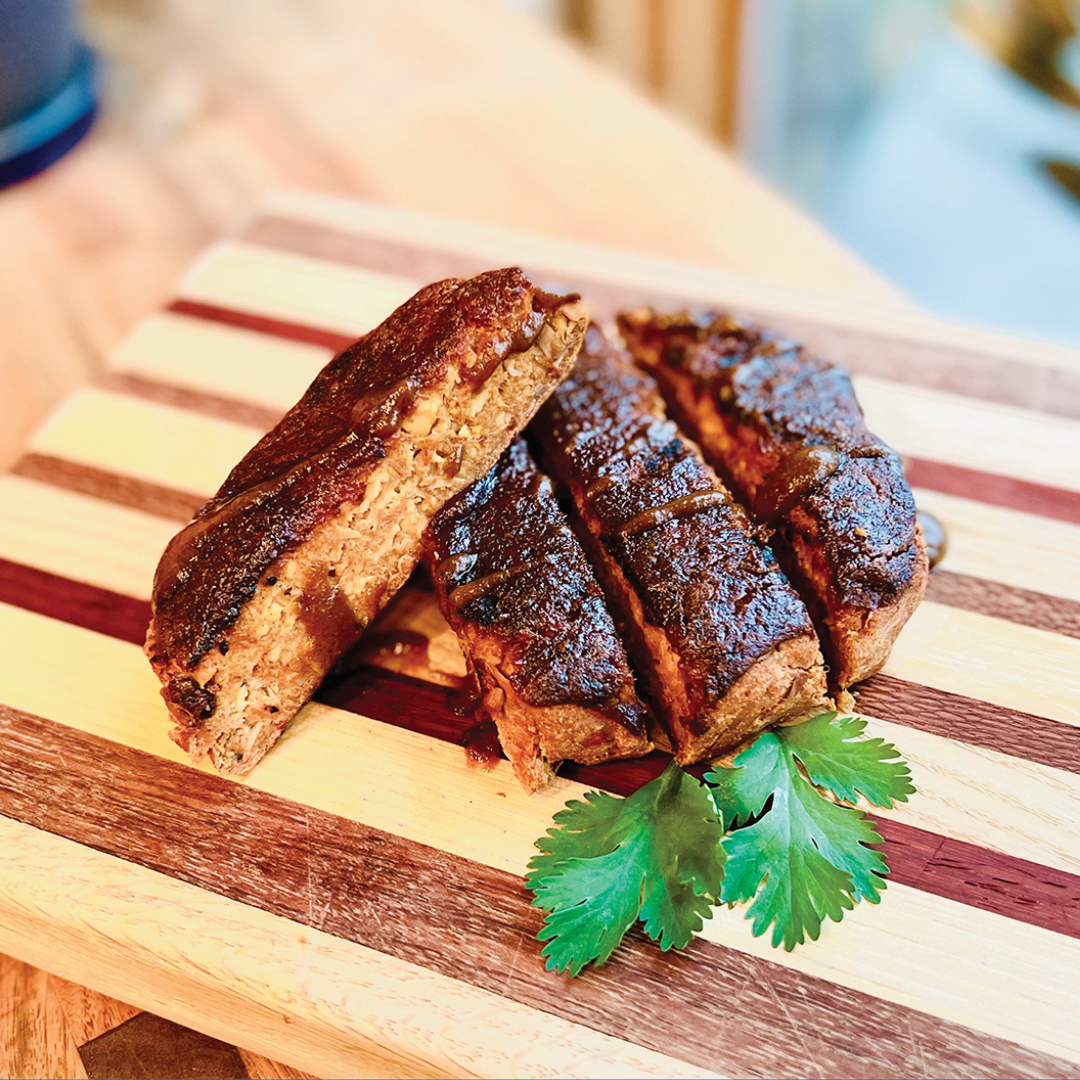 You’ll find galbi, also known as Korean barbecue ribs, on the menu at countless KBBQ restaurants and at backyard summer get-togethers at homes across the country. The plant-based meat artisans over at The Herbivorous Butcher have captured that experience of tender meat cooked with a sweet, umami sauce made from soy sauce, garlic, and brown sugar, which pairs perfectly well with a summery beer or hoppy, non-alcoholic beverage.
FIND OUT MORE 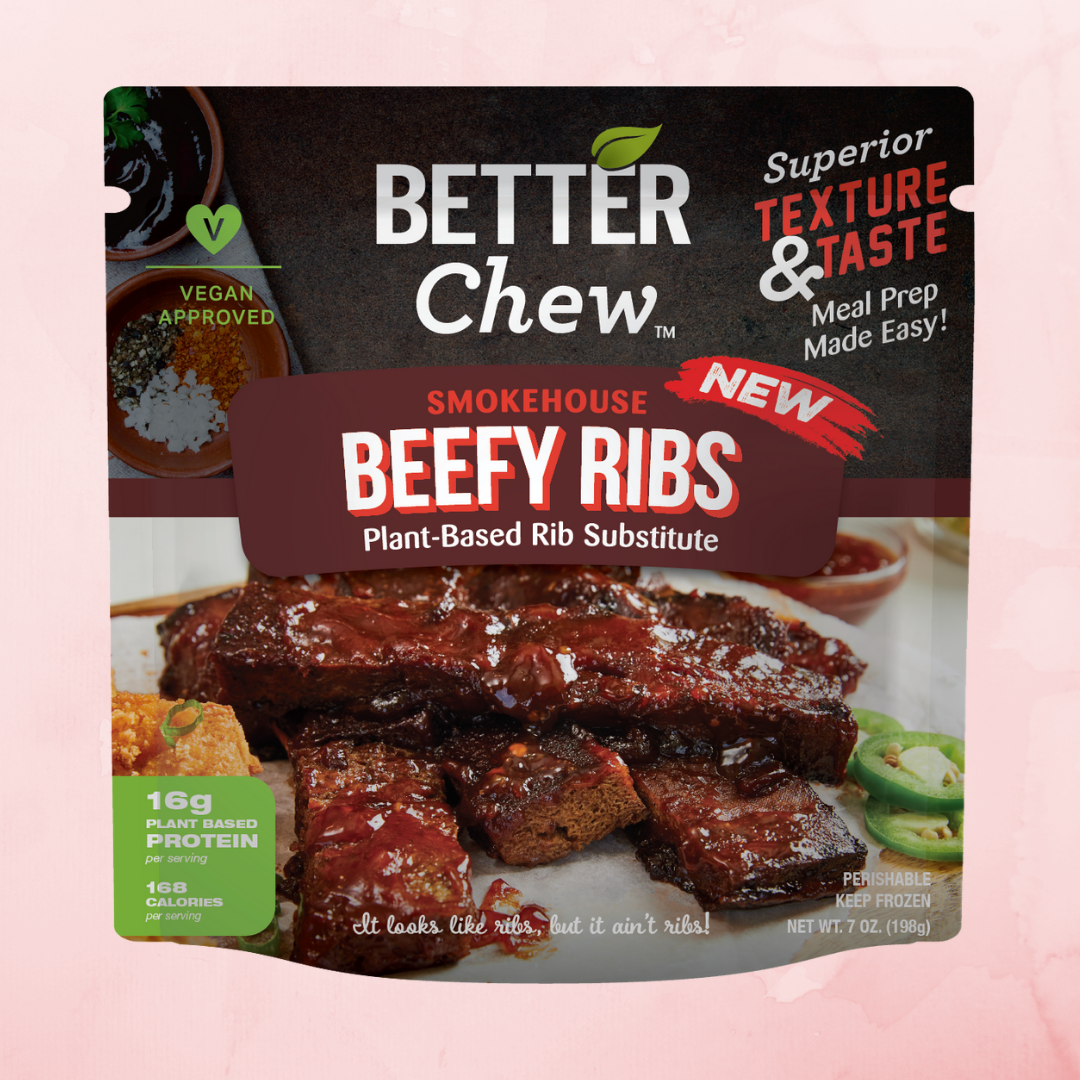 Founded by entrepreneur and activist Chef GW Chew, this Public Benefit Corporation seeks to use business as a force for good by making healthier, sustainable food more accessible. (Chef Chew also owns The Veg Hub, a plant-based bistro based in Oakland, CA.) Its grill-ready Smokehouse Beefy Ribs are made from soy protein and have a tender, meaty chew that’s ready to soak up your favorite sauce.
FIND OUT MORE 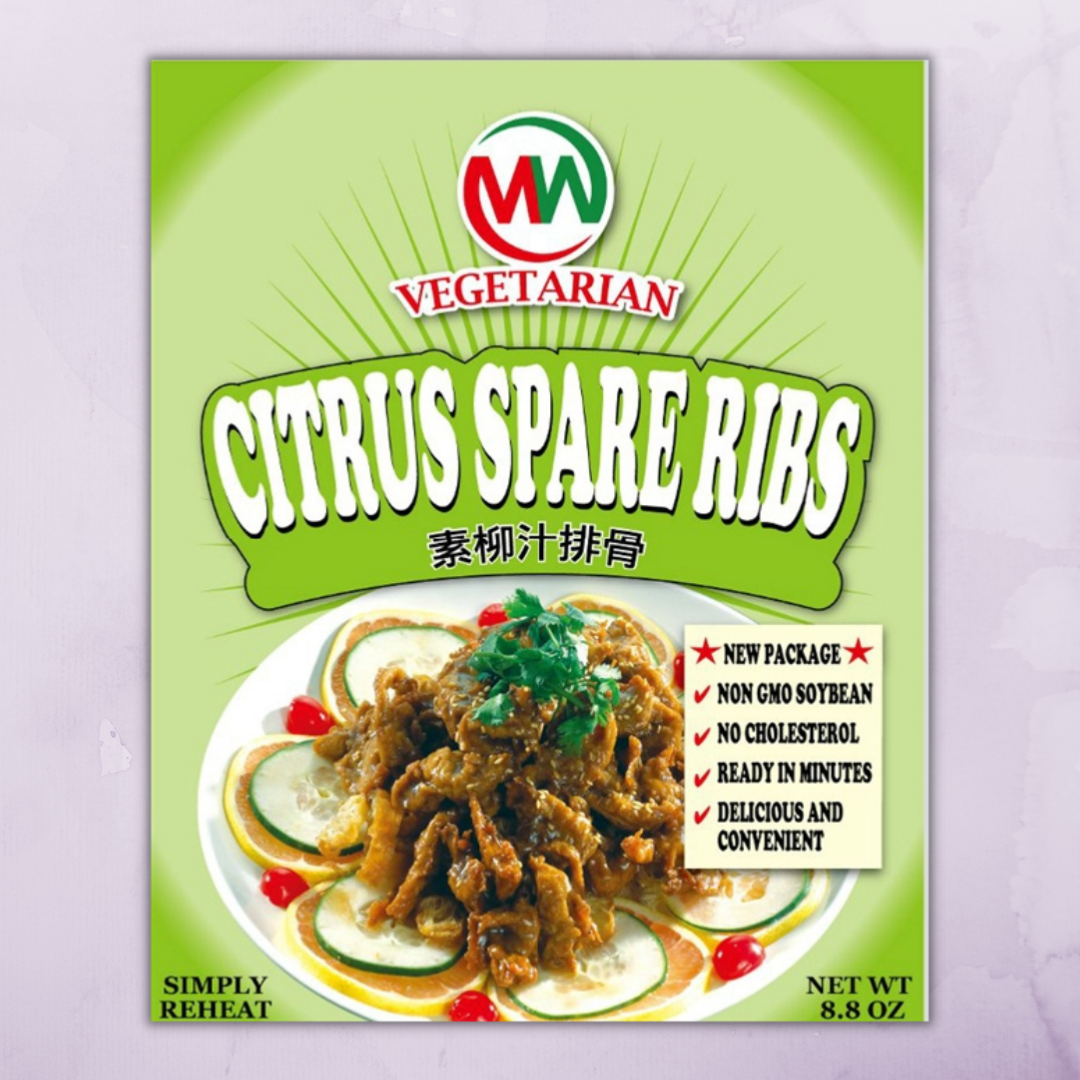 Located in New York City’s Chinatown, Lily’s Vegan Pantry (previosuly May Wah Vegetarian Market) has been making plant-based meat for more than 25 years. The family-owned brand’s Citrus Spare Ribs are a favorite of chefs at restaurants across the city, thanks to their beefy texture and tangy sauce. Tastes great in a wrap, or alongside grilled produce, such as eggplant, tomato, asparagus, corn-on-the-cob, and summer squash.
FIND OUT MORE

Vegan Meat for Kebabs and Skewers

The meaning behind “shish kebab” has quite the literal meaning, coming from the Turkish words for “sword” (sis) and “kebab” (meat). Historians have identified examples of shish kebabs as far back as Greece during the Byzantine era. And today, we can find examples of meat-on-a-stick all over the world, from satay in Indonesia, seekh kebabs in India, yakitori in Japan, suya in Nigeria, and more.

These days, skewered meat needn’t be made from beef, chicken, pork, or shrimp. Your kebab could feature beef-like chunks made from soy, or shrimp crafted from plant-based ingredients. We love to make use of spring and summer’s bounty by grilling up kebabs with seasonal vegetables, like tomatoes, bell peppers, zucchini, and mushrooms. All of the options below come frozen, so be sure to thaw them prior to marinating and skewering. 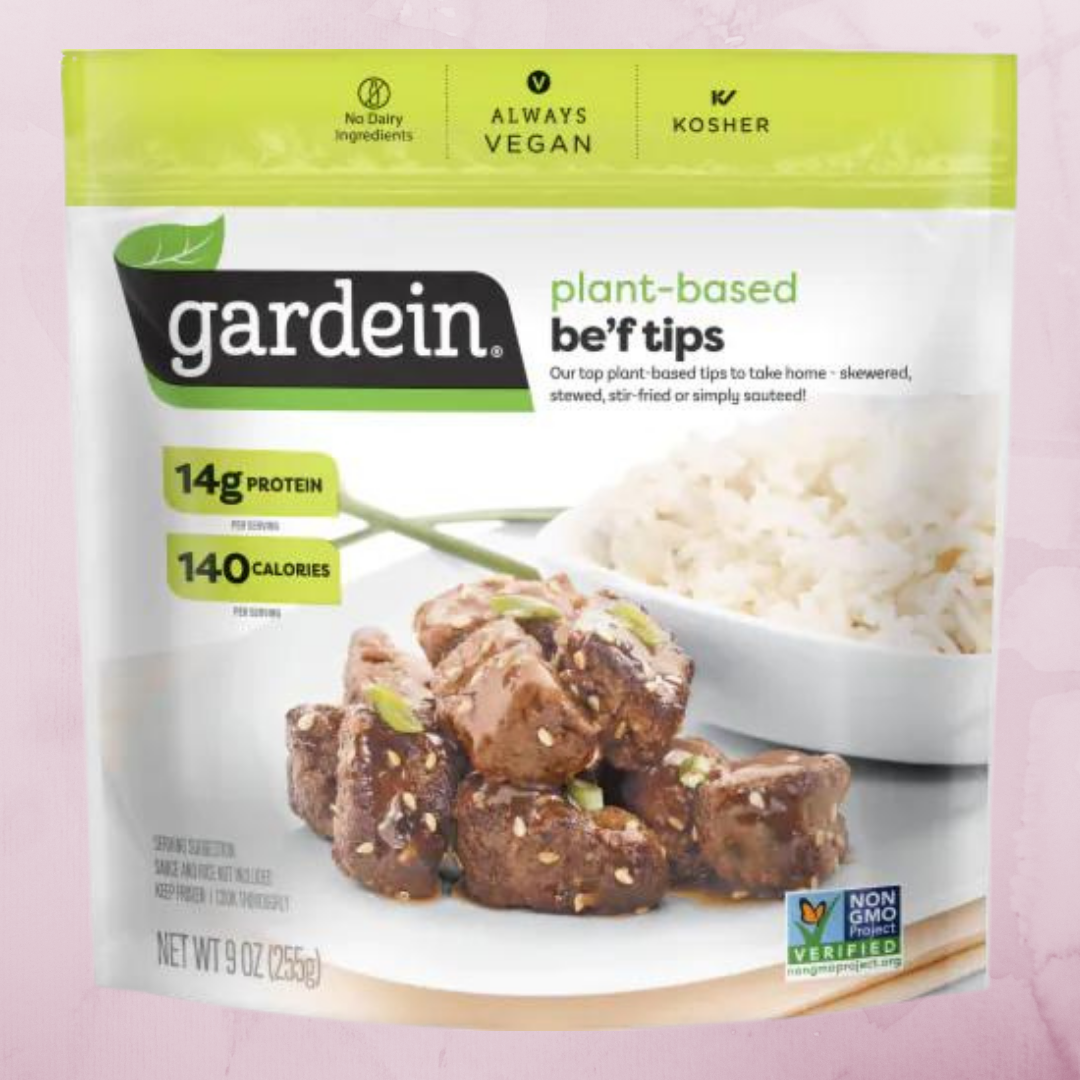 This tender beefless beef by Gardein comes in bite-sized pieces, so it’s easy to prep for skewers! Just be sure that you give it time to thaw before you get started. Try it threaded with juicy brown button mushrooms, bell peppers, red onion, and a simple marinade—such as the one in this recipe—made from soy sauce, pineapple juice, brown sugar, minced garlic, fresh ginger, and sesame oil.
FIND OUT MORE 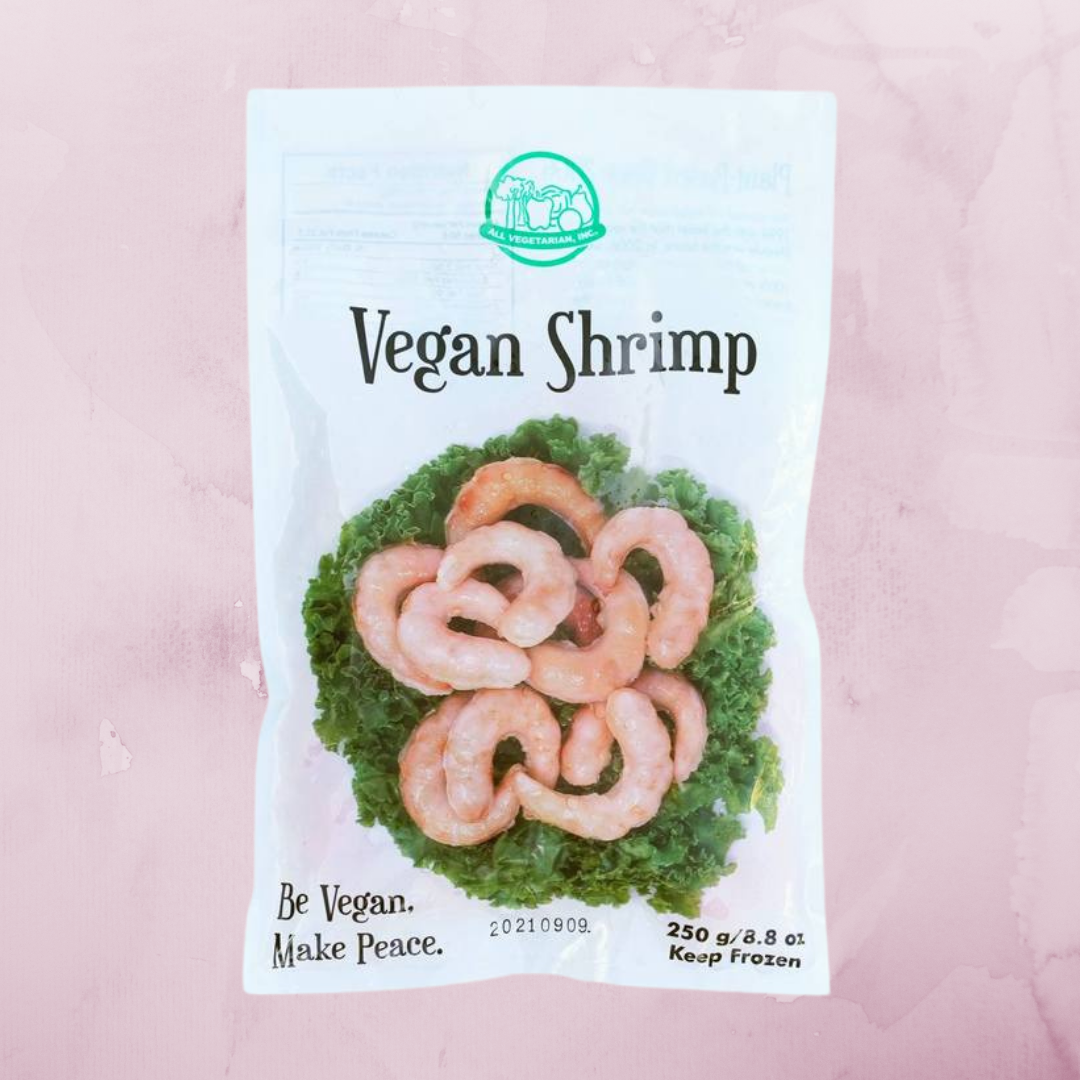 According to reviewers across the Internet, these vegan shrimp by All Vegetarian have the fishy and characteristically bouncy texture of the real thing. Marinate the thawed, soy-free vegan shrimp in olive oil, lemon juice, fresh garlic, salt, and pepper, and serve with a lemon wedge and minced parsley. Instead of using skewers, you could also cook them loose in a grill basket or on an indoor grill pan.
FIND OUT MORE 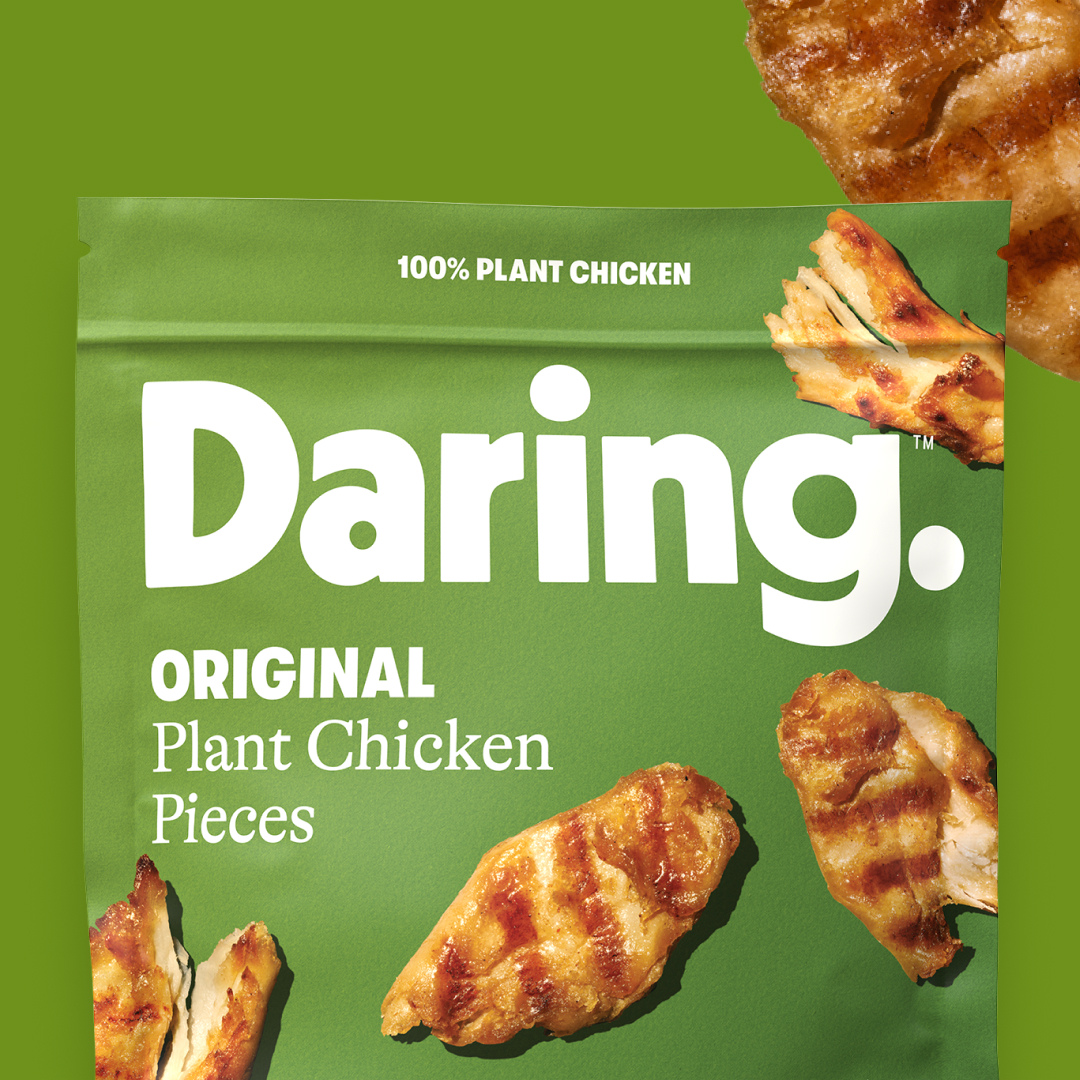 These succulent vegan chicken pieces by Daring are meaty enough to sizzle in a skewer over a hot grill. (They also shred, if you’d prefer to make pulled plant-based chicken sandwiches.) Serve them on a simple kabab with zucchini, a rainbow of bell peppers, cherry tomatoes, and red onion after marinating the vegan meat in olive oil, soy sauce, vegan honey, and garlic.
FIND OUT MORE

For more vegan barbecue food, read:
These 10 Burgers Are Barbecue-Approved
The Essential Vegan Guide to Grilling
The 10 Best Vegan Hot Dogs and Sausages