Customers were nothing but grateful when Ben & Jerry’s debuted its inaugural non-dairy flavors in 2016. We were even more appreciative of the recent additions such as Non-Dairy Netflix & Chill’d and “Milk” & Cookies. However, the taste of these fabulous flavors kept us wanting more, and the longing for a vegan Phish Food intensified. Back in 2019, the company told this VegNews editor that this particular flavor presented a formidable hurdle: vegan marshmallow. Ever loyal to its fans, Ben and Jerry’s dedicated flavor gurus set to work on the problem, and soon, they prevailed. Curious as to why vegan marshmallow proved so challenging, we interviewed one of the food scientists behind this new flavor, Natalia Butler, as well as vegan marshmallow brand Dandies Director of Marketing, Dan Reed. Here’s everything you need to know about the delicious science behind vegan marshmallows.

Conventional marshmallows do not contain egg or dairy—they’re essentially water, sugar, and corn syrup—so what’s not vegan? Gelatin. This ingredient provides marshmallows their delightful squishy, bouncy texture. Unfortunately, gelatin is made from collagen extracted from animal skin, bones, and ligaments (typically from cows and pigs). Due to this cruel ingredient, marshmallows aren’t even vegetarian.

While Ben and Jerry’s vegan marshmallow swirl is a triumph, this ice cream company isn’t the first to veganize this confection. Dandies is the most accessible commercial vegan marshmallow in the US, and it was the first marshmallow brand to become non-GMO certified. The classic variety hit the shelves—in direct competition with non-vegan marshmallows—in 2008. Since then, it’s pumped out marshmallow minis and seasonal flavors such as peppermint and pumpkin spice.

“Our biggest hurdle was that there wasn’t a guidebook for how to make a marshmallow that’s stable enough to have a long shelf life with quality natural ingredients. We literally had to re-envision the entire process for making marshmallows from the ground up to do what we wanted to do.” 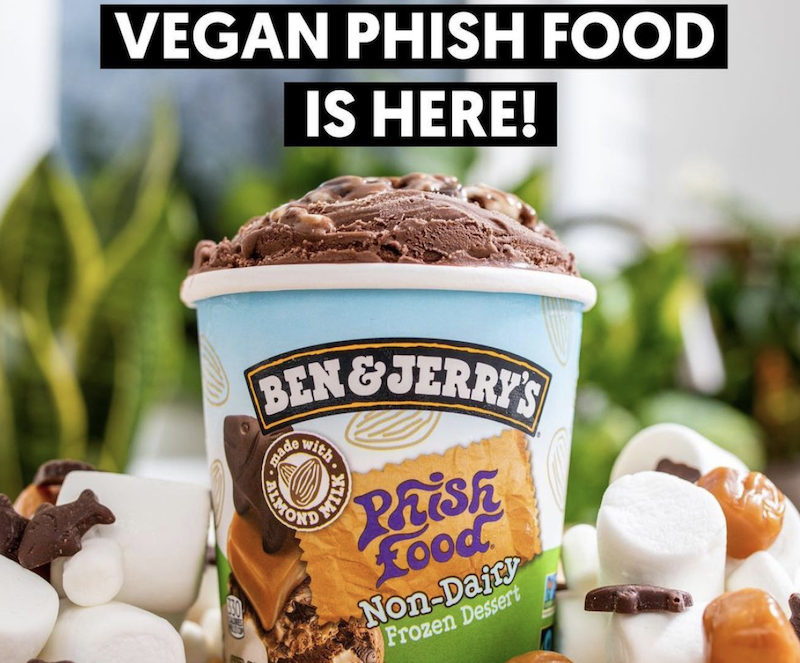 How Ben and Jerry’s veganized the marshmallow swirl

The pillowy sweet marshmallow swirl so many have grown to love via the original Phish Food is different from traditional shelf-stable marshmallows because it contains an unlikely ingredient: eggs. Butler explained that the process of veganizing this ingredient was tedious, as the team had to “go back to the drawing board” several times. They were determined to produce something that was as close to the original as possible, but mass-producing this was an issue, particularly during the pandemic.

“We’d test out different swirls via video calls!” Butler said. “We also did a lot of whipping in our own mixers at home.”

Butler informed us about “swirl technology,” which involves specific machinery used to crank out pint after pint. She noted, “What worked in small batches in our kitchen doesn’t always translate when we go to make it in larger batches. Once we nailed that down, then comes the easy part—we let the technology do the rest.”

Now that Ben and Jerry’s has cracked the code on the vegan marshmallow swirl, our mind immediately jumps to other marshmallowy flavors waiting to be veganized. There’s the Chocolate Shake It, Gimme S’more!, Glampfire Trail Mix, and Minter Wonderland. Further, let the record reflect this official request to sell the vegan marshmallow swirl in a bottle. We bet it would be fabulous on ice cream, brownies, cookies, shakes, and well, everything! We also requested a non-dairy marshmallow core flavor, to which Butler replied, “While the cores require certain formulations, we do not know if the marshmallow swirl will make it to the core line as of yet, but we’re always thinking of new ways to add the iconic marshmallow into our non-dairy line, so stay tuned!”

Aside from ice cream, there are hundreds of delicious uses for vegan marshmallows. Reed prefers the classic preparations—roasted over a campfire, dotted onto hot chocolate, melted into rice crispy treats—but he also threw in a few curveballs. “Mezcal and toasted Dandies marshmallows go together surprisingly well!” he assured us. Reed also highly recommends what he calls “amplified s’mores” which involves substituting nut butter cups for traditional graham crackers in a s’mores sandwich. When it comes to how to eat a marshmallow, Reed neatly concluded, “Marshmallows are very much a seasonal thing. Each season has its own unique uses.”

For recipes with vegan marshmallows, check out these S’mores Brownies and Butterscotch Haystacks.