Once it looks like sunny days are here to stay—no more hot weekends followed by a cool Monday, thankyouverymuch—we’re ready for barbecues. We’re talking veggie burgers, meat-free hot dogs, and plant-based beef kebabs. If it’s vegan and we can grill it, then we’re here for it. But, throwing a barbecue is about more than just getting your plant-based protein in order. You’re going to want sides to fill up everyone’s plates. We’re talking dishes such as dairy-free mac and cheese, cornbread, and vegan summer salads. Yes, salads. At the barbecue. Trust us.

These aren’t your typical disappointing salads made with iceberg lettuce, a few slivers of red onion, unsliced grape tomatoes, and no dressing. A summer salad can be so much more than just leafy greens. It can be watermelon mixed with dairy-free feta and fresh mint, grilled corn with black beans and charred tomatoes, or a classic potato salad, made vegan. In other words, what entails a vegan summer salad is open to interpretation. So, here are some recipes that we love to make. 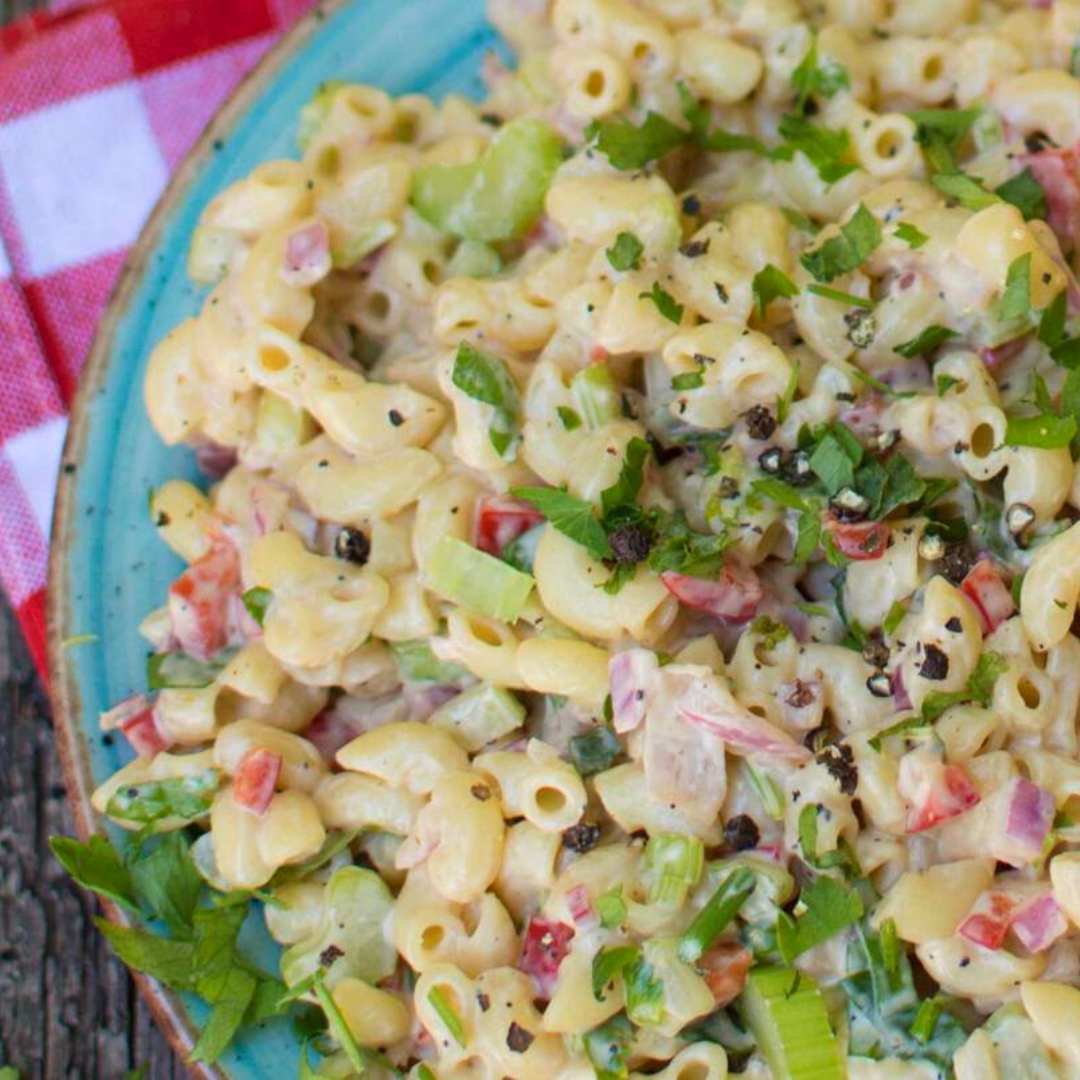 Question: is it really a barbecue without macaroni salad? Answer: yes, because we’ll try anything as long as it’s vegan, but we really, really love a good macaroni salad. This summery pasta salad balances the textures of crisp, refreshing produce with toothsome pasta coated in a silky sauce. It’s also loaded with delicious carbohydrates (which can be whole grain or gluten-free) and tangy to boot. Check out this guide for our top vegan mayo picks.
GET THE RECIPE 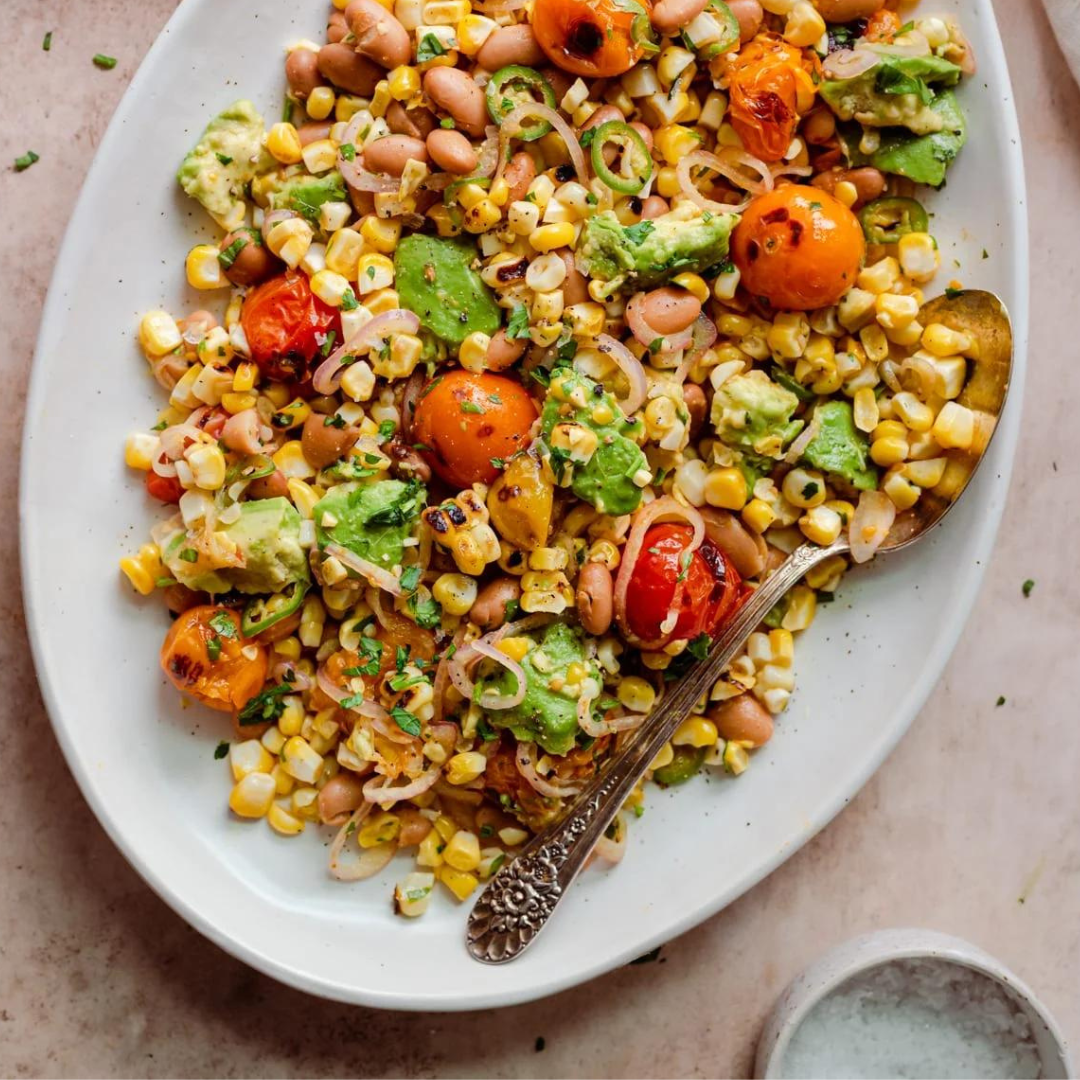 If we were to count the ways that we love corn on two hands, we would run out of fingers. One of those ways is when grilled corn is used in salads. This one combines grilled corn and charred cherry tomatoes with black or pinto beans, marinated shallots, japaleños, lime, cilantro, and fresh avocado. We think serving it with a big bowl of tortilla chips is in order.
GET THE RECIPE 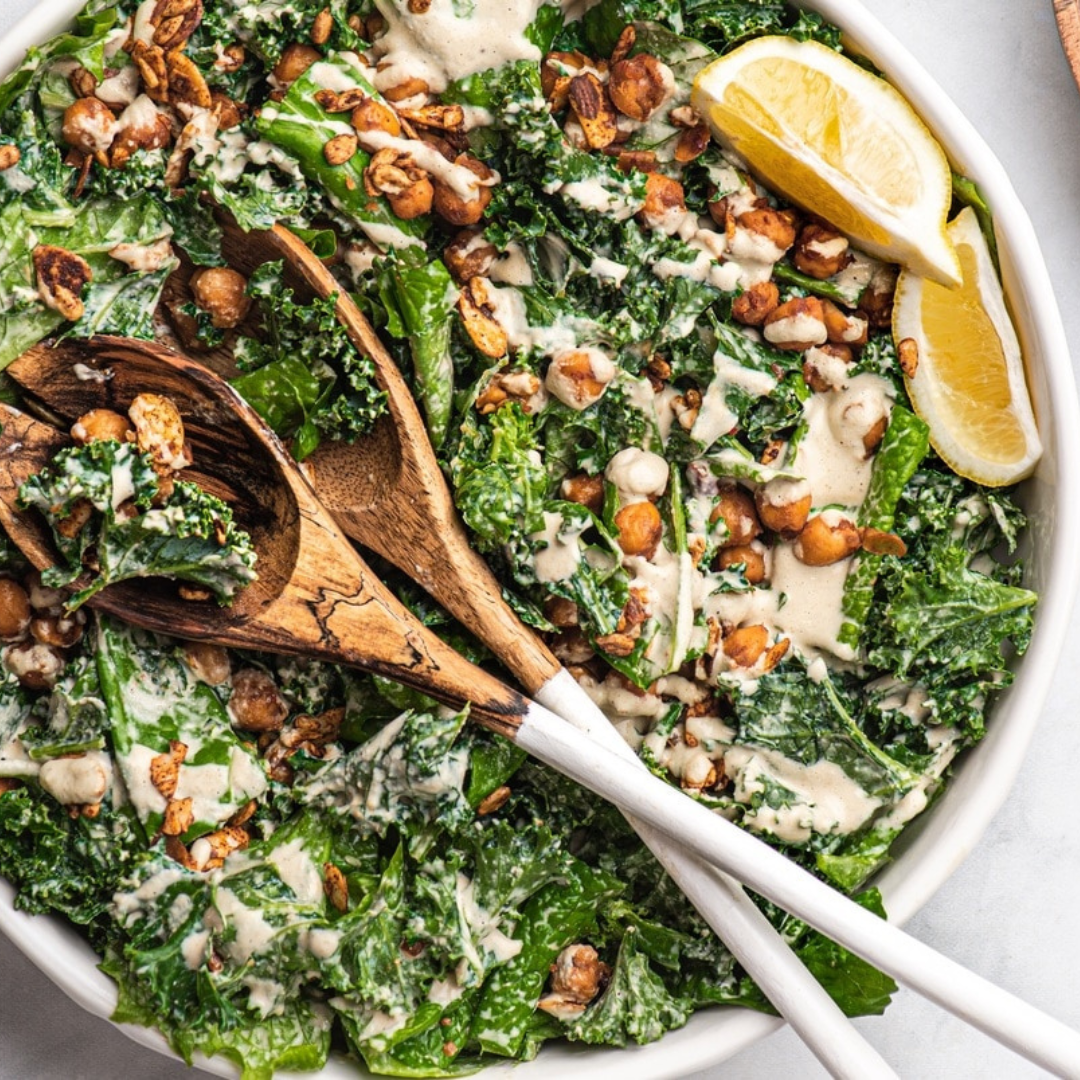 Meet the elevated Caesar salad. Kale leaves are massaged in a creamy, dairy-free sunflower seed-based dressing, then tossed with crisp romaine lettuce and spicy, crisp chickpeas. This dish will convince even the biggest salad skeptics to eat their greens. If you’re short on time, you can swap the homemade Caesar dressing for one that’s store-bought, like Follow Your Heart’s.
GET THE RECIPE 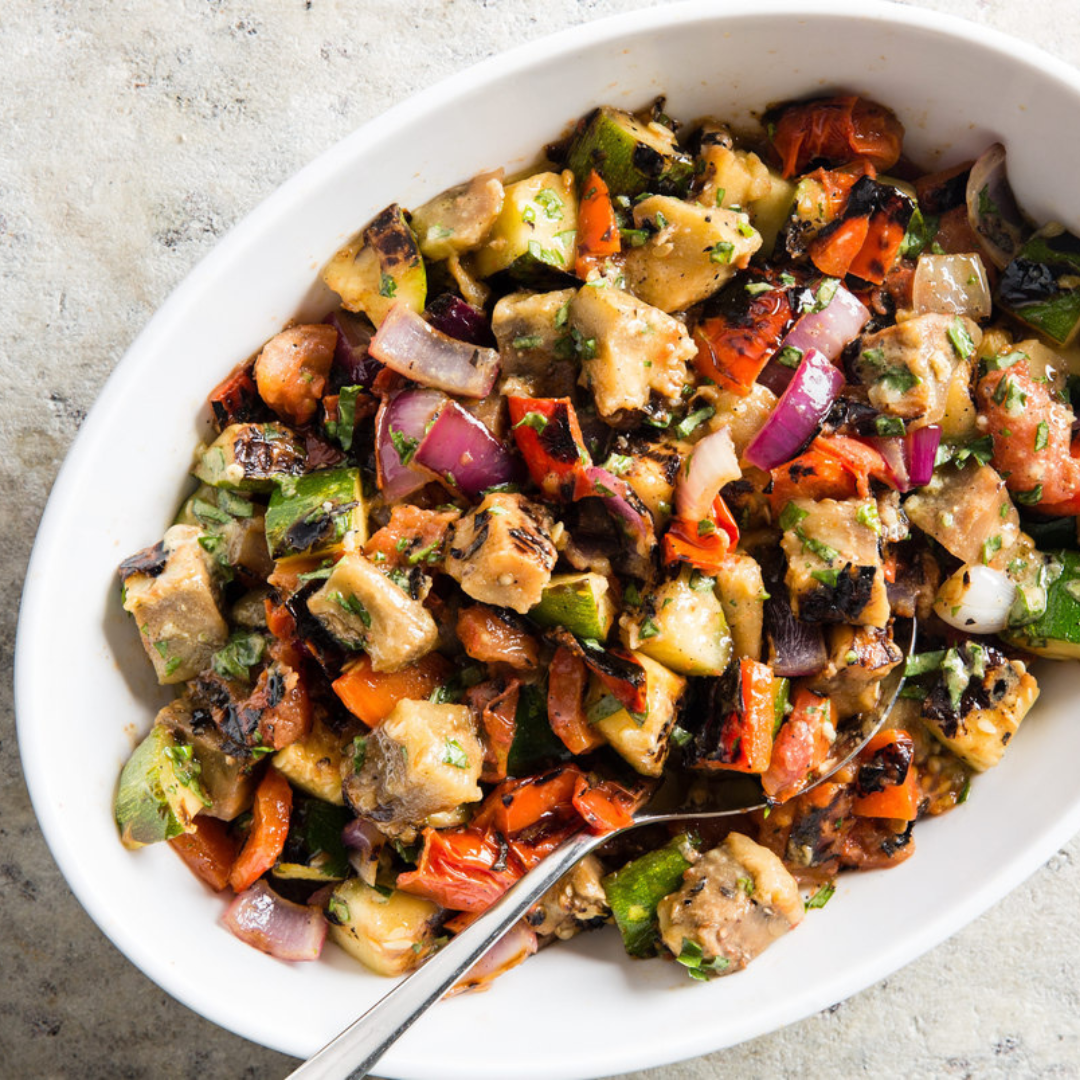 Speaking of grilled salads … Eggplant and zucchini undergo a complete transformation when you grill them. This warm salad features bite-sized pieces of tender, melt-in-your-mouth summer vegetables infused with a smoky flavor. While they’re the co-stars of the show, they’re also accompanied by peppers, red onions, and tomatoes.
GET THE RECIPE 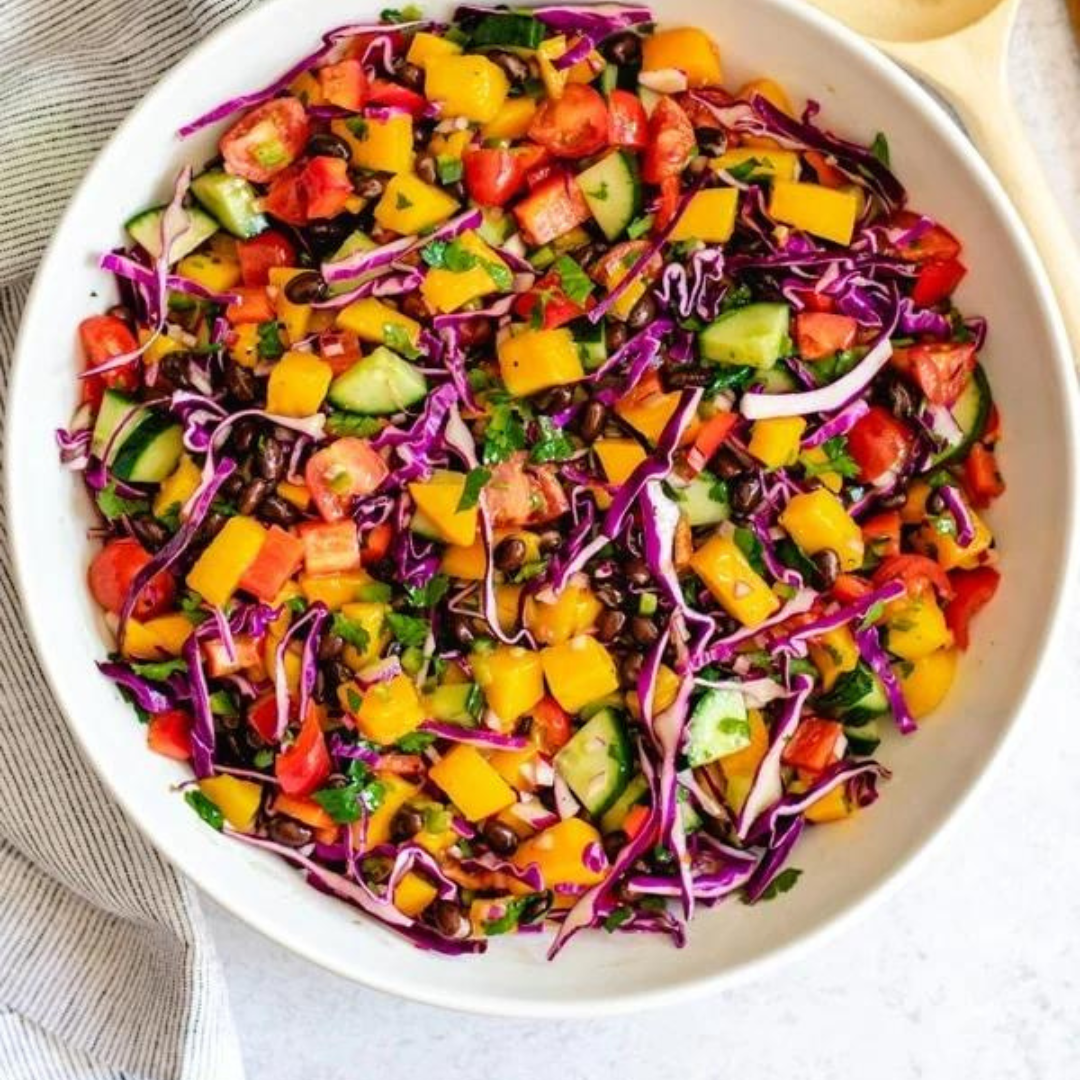 Juicy mango, black beans, jalapeño, and red cabbage are an absolute dream team. This salad is packed with texture, flavors (sweet, spicy, savory, and herbaceousness, thanks to fresh cilantro…yum!), and protein. We love it on top of a vegan burger right off the grill or with crunchy, salty tortilla chips.
GET THE RECIPE 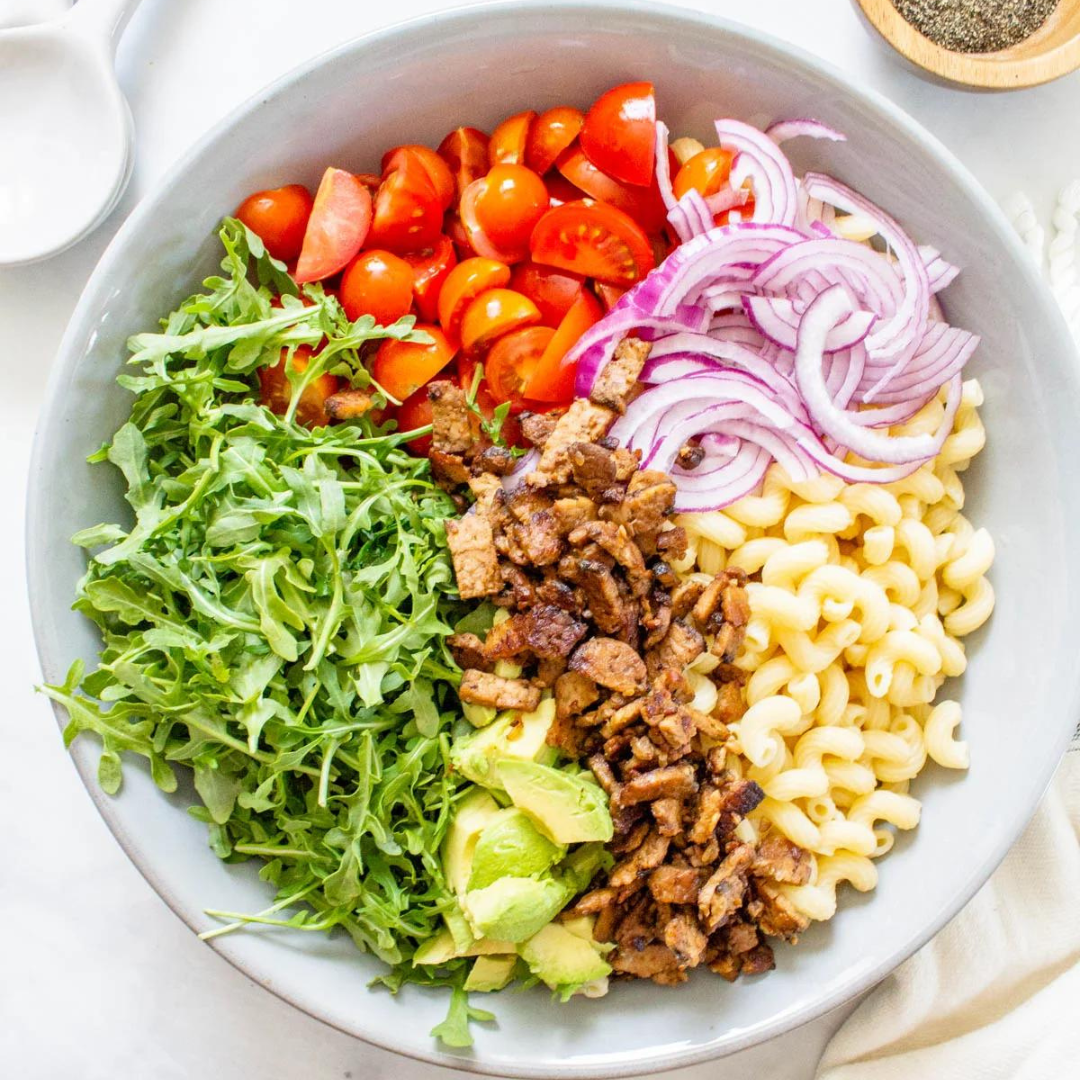 We’re in love with the concept of swapping the bread in Tabitha Brown’s famous TTLA sandwich with macaroni. Loaded with tempeh bacon, cherry tomatoes, avocado, and peppery arugula, then tossed in a creamy, tangy dressing, this barbecue-friendly salad might just overshadow the main eventers (aka, veggie burgers and hot dogs).
GET THE RECIPE 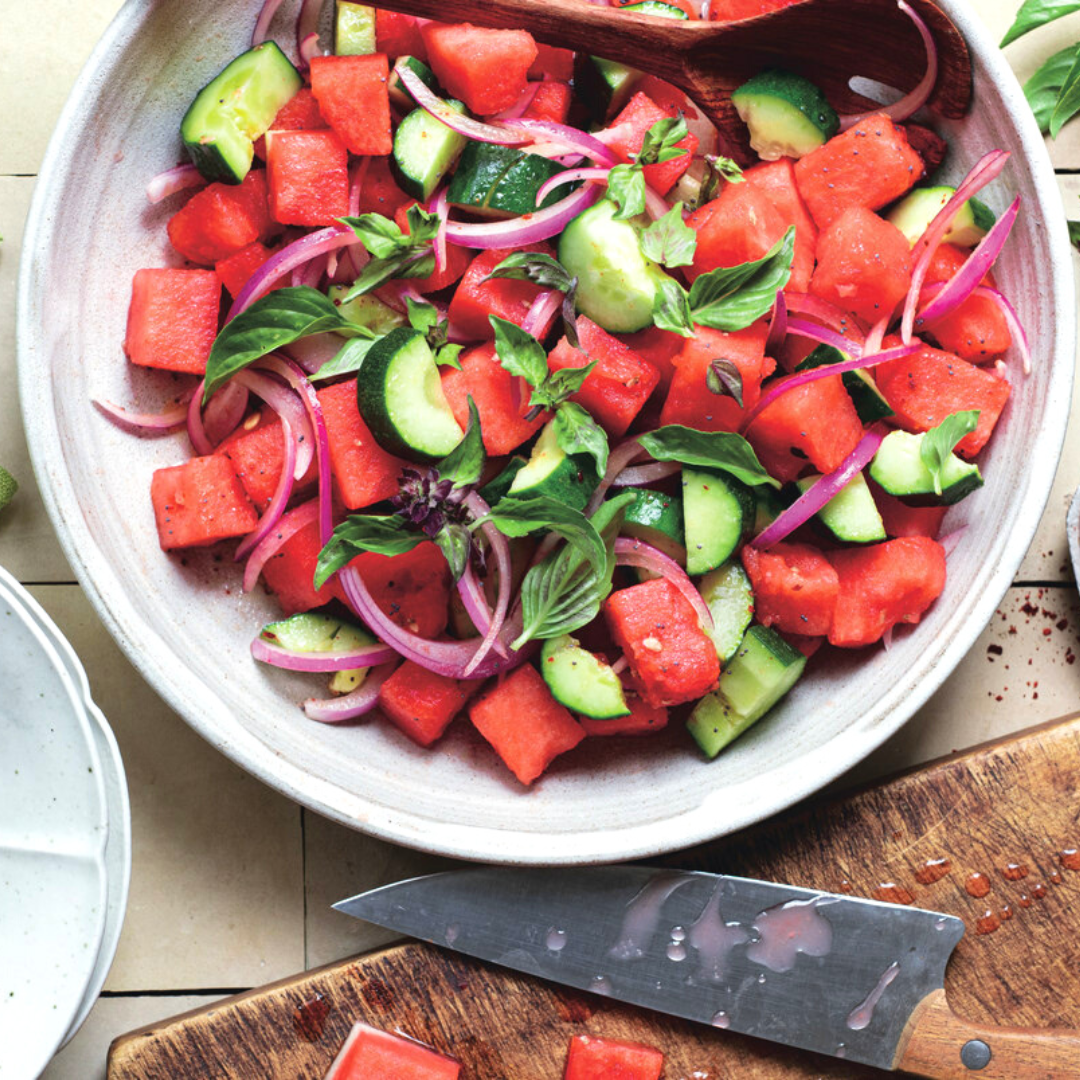 Pairing watermelon with cucumber is the way to get your serving of fruit in a refreshing, summer-style salad. It has juicy watermelon, crunchy cucumber, and fresh basil. To add more flavor and texture, add vegan cubed feta like Violife’s Just Like Feta product. If you prefer your feta broken into pieces, we recommend Follow Your Heart’s Dairy-Free Feta Crumbles. Pro tip: for the juiciest watermelon, pick a fruit that feels heavy, sounds hollow, and has a bright yellow spot.
GET THE RECIPE 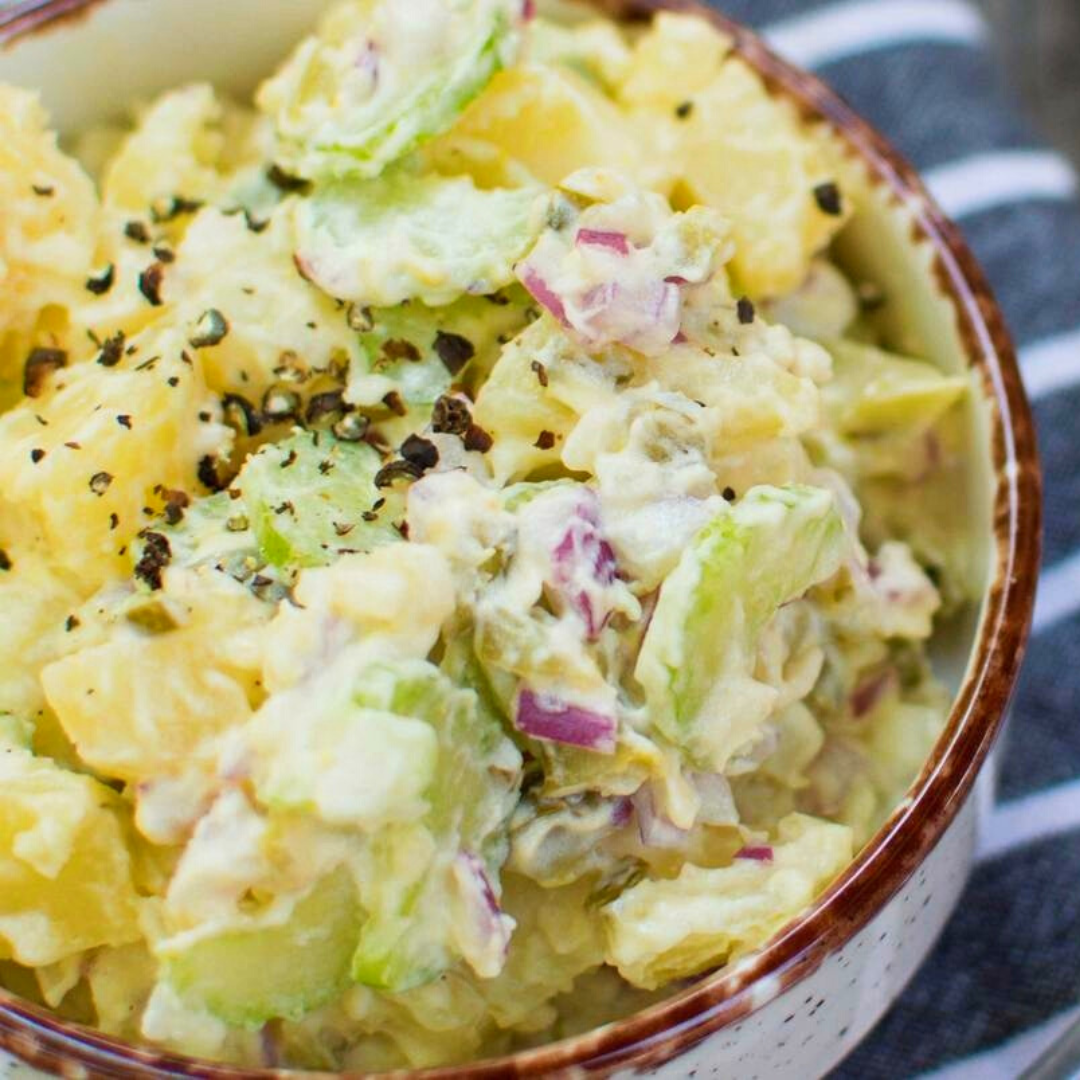 No matter the event, it’s never wrong to serve the humble potato in any of its various forms. In the summer, we want chips and this creamy potato salad to snack on while vegan burgers sizzle on the grill. Made with Russet potatoes, celery, dill pickle, and red onion, you can flavor this salad with any spices you like. Add paprika and garlic powder or a curry spice blend with cilantro. It’s your salad—have fun with it!
GET THE RECIPE 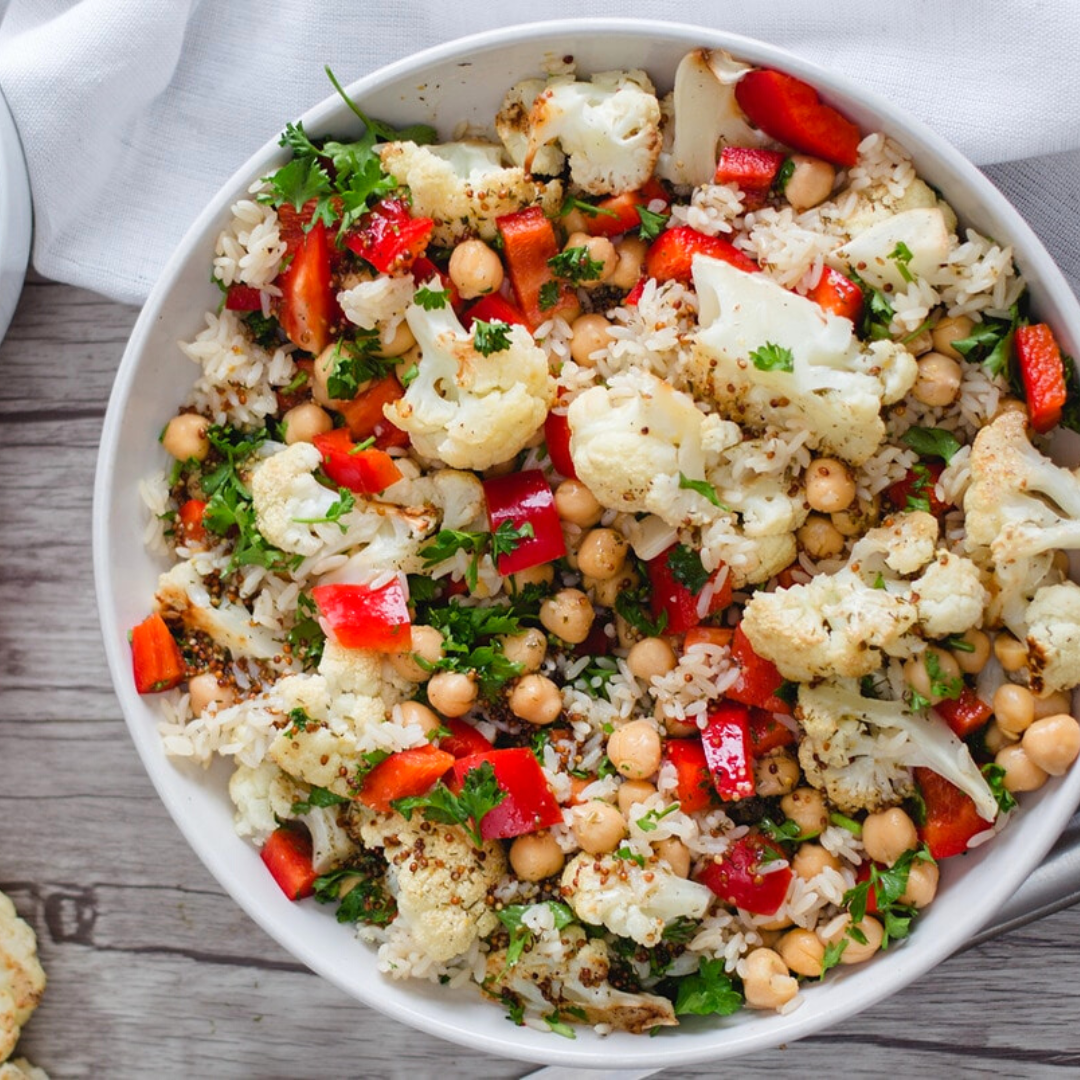 Cauliflower is the cruciferous veg’ with seemingly limitless identities. But even in a world of Buffalo cauliflower “wings” and orange cauliflower “chicken,” it’s okay to take a step back and let it shine in its true form. This Greek-inspired salad combines tender, blanched cauliflower (tip: throw the florets on the grill for a couple of minutes to imbue them with a char) with bell peppers, chickpeas, parsley, and a lemony olive oil dressing.
GET THE RECIPE 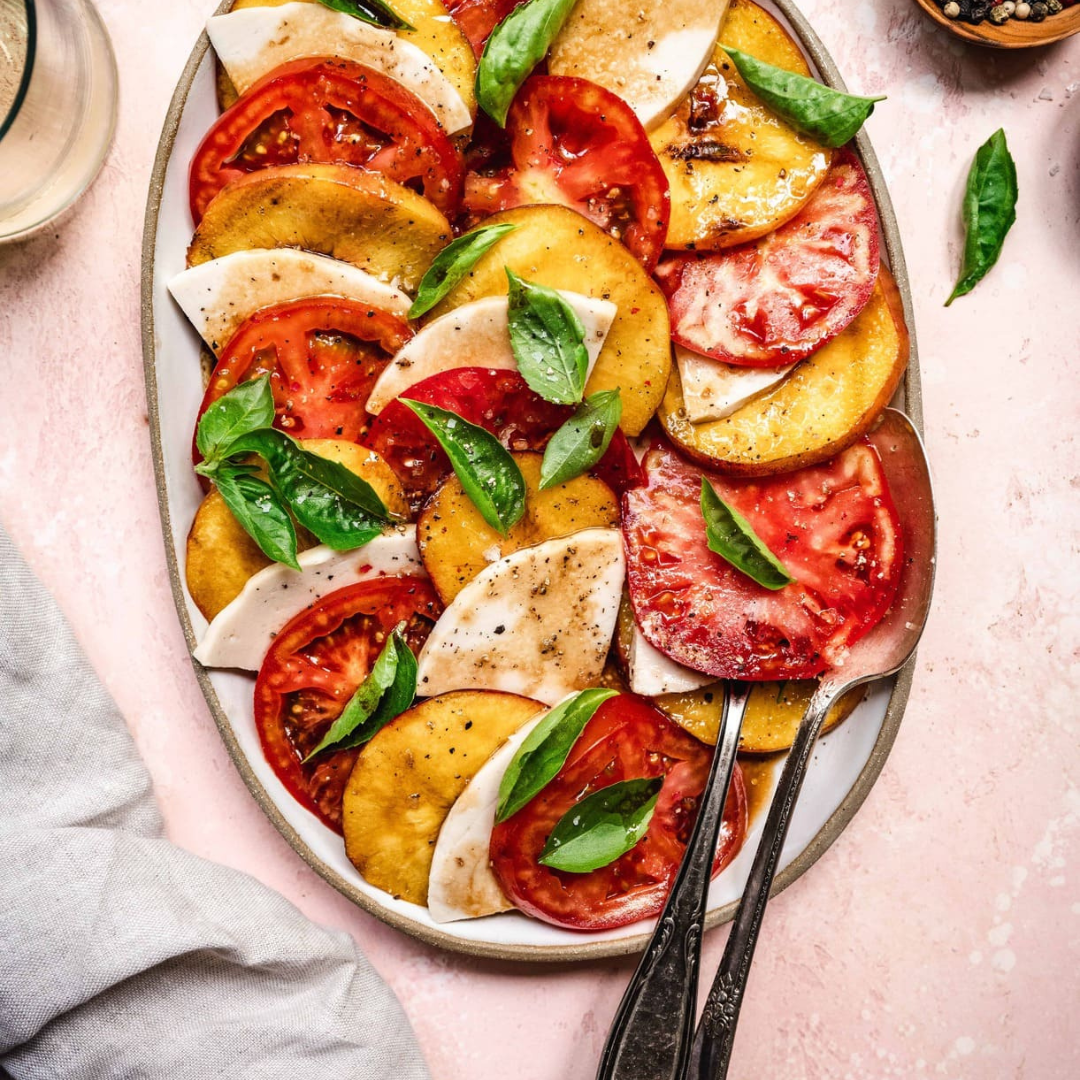 Caprese salads are amazing in their true form, but adding juicy grilled peaches into the mix just ups the game. Letting ripe peach slices sizzle on the barbecue only elevates their juiciness and it pairs so well with the tomatoes, basil, and balsamic vinegar. This recipe uses the Organic Cashew Milk Mozzarella from Miyoko’s Creamery, which has the soft texture of the fresh cheese you can find at the grocery store’s deli counter. Serve alongside crusty bread so you and your guests can soak up every last drop.
GET THE RECIPE 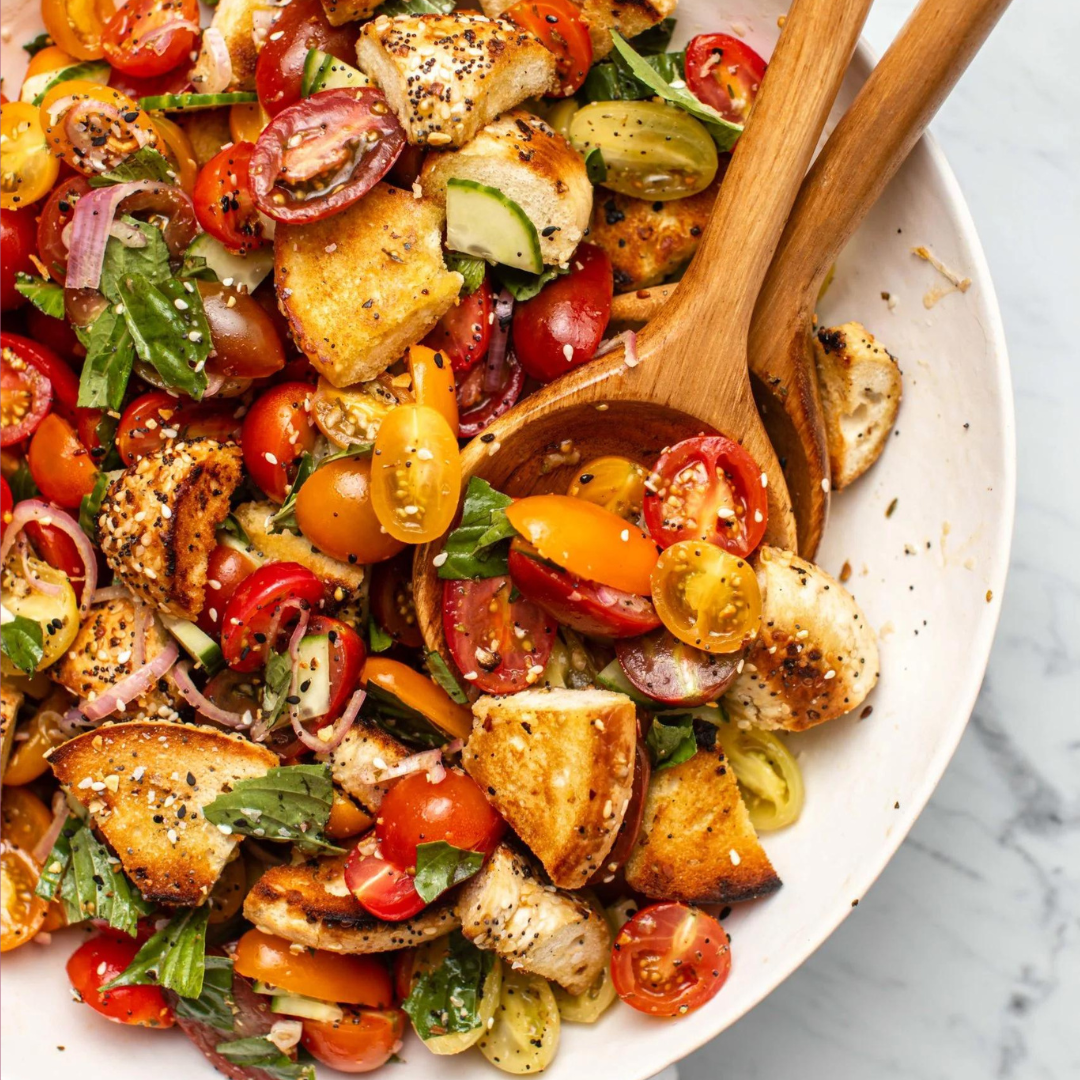 Nothing beats the aroma and flavor of fresh tomatoes—nothing. This vegan Panzanella has all of the tomatoes you could ever want, tossed with basil, crunchy English cucumbers, a tart red wine vinegar dressing and, toasted, cubed everything bagels instead of the traditional torn-up stale Italian bread. It’s a great use of those day-old bagels and all of the best summer produce.
GET THE RECIPE 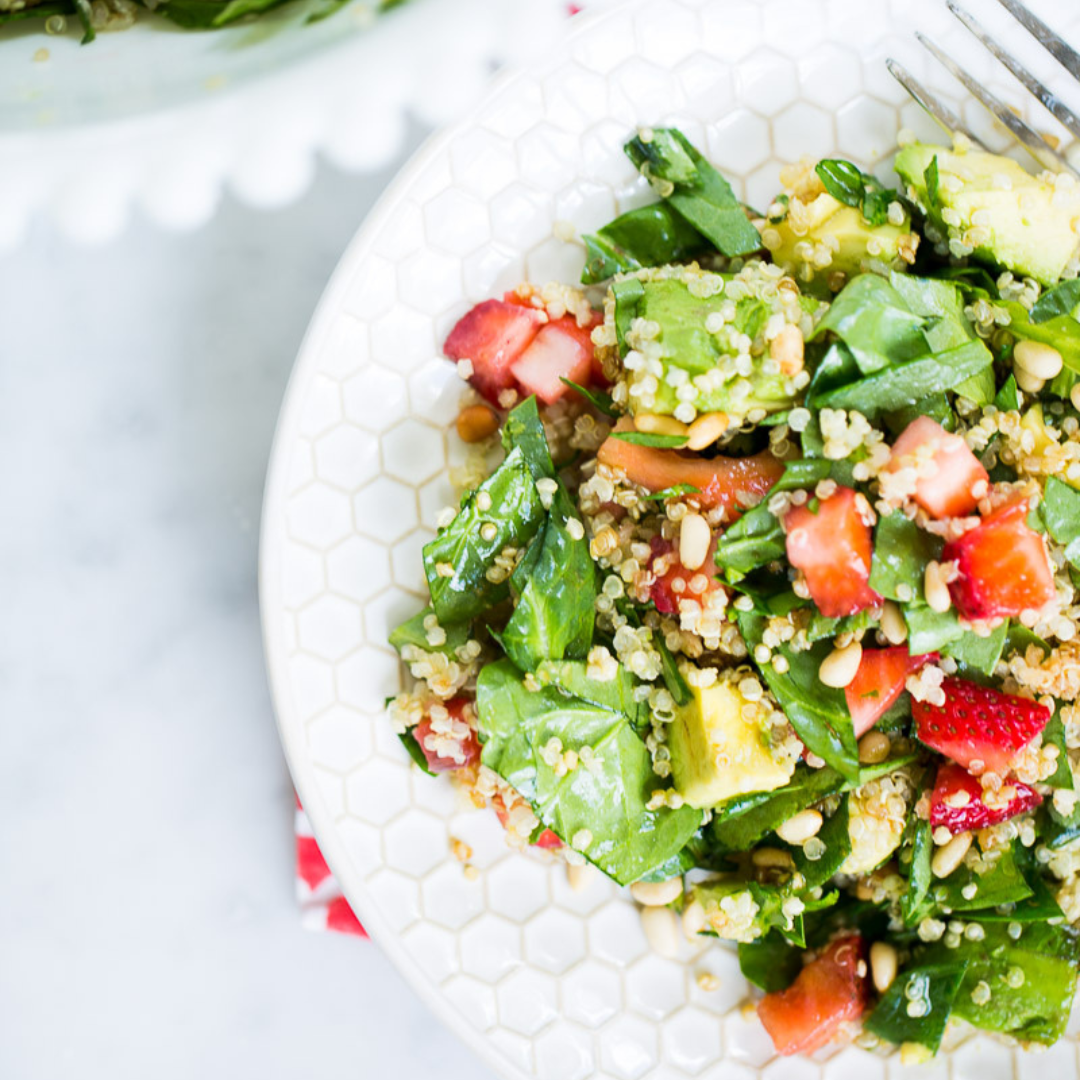 Strawberries are a serious contender for summer salads—especially in this one, where ripe berries are tossed with quinoa, spinach, and creamy avocado, plus spinach to add a little bit of green. It is a salad, after all! For the dressing to tie everything together, simple is best. In this instance, that means olive oil and balsamic vinegar.
GET THE RECIPE 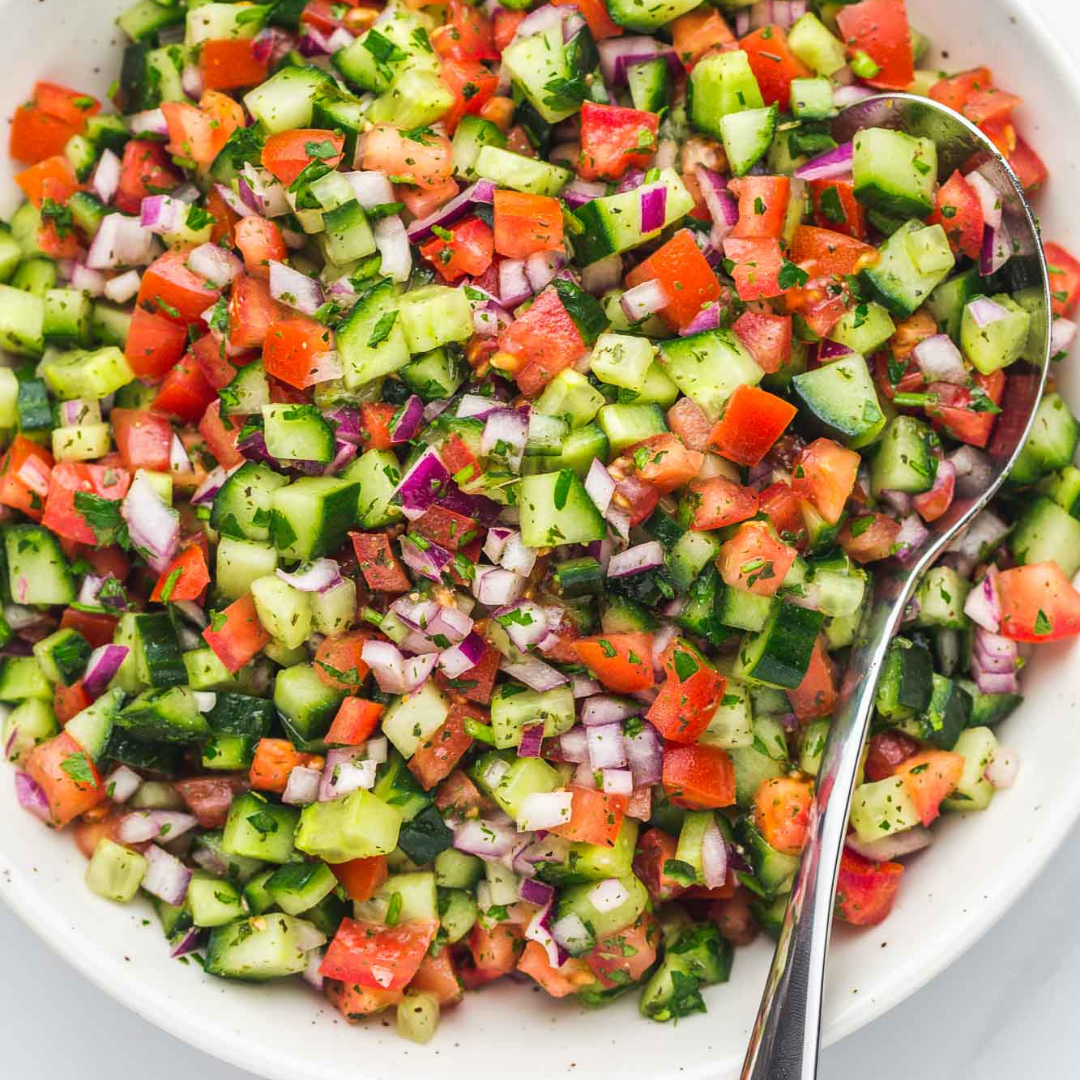 Shirazi salad, also known as salad-e shirazi, is a Persian salad consisting of fresh tomatoes, cucumber, and red onion tossed with fresh parsley, dried mint, and a bright, lemony dressing. Fun fact: it’s named after Shiraz, a city in southwestern Iran that’s known for its gardens. Lemon juice gives this salad its signature tart flavor, but traditionally, a sour grape juice called “ab ghooreh” is used. Look for it if you have access to Iranian groceries near you.
GET THE RECIPE