One thing we know about Donald J. Trump, former “university” founder, one-time peddler of wines, steaks, and water (all defunct), former reality show host, and 45th President of the United States, is that he really likes fast food. A self-declared germaphobe, Trump has displayed his penchant for fried animal parts when he was photographed with a greasy chicken bucket on a plane as he was on the campaign trail, and justified his gustatory habits because, as he told Anderson Cooper in 2016, outlets like McDonald’s have “cleanliness” standards he trusts (Also, he’s afraid of being intentionally poisoned—this actually seems like a reasonable fear for him to have—and their menu items being pre-made puts his mind more at ease.)

This is why, weeks after a government shutdown he initiated after Democratic leaders wouldn’t agree to help fund his $5 billion border wall, it wasn’t all that strange that South Carolina’s football champions, the Clemson Tigers, were fêted at the White House with an assortment of fast food, clashingly arranged on silver trays next to ornate, gold-plated candelabras and the president standing behind the table, positioned under Abraham Lincoln’s portrait, with a wide grin and confusing body language. So, yes, it was unusual, but it really wasn’t that strange given our new normal. After all, this is Trump’s favorite, er, food, and the shutdown has affected the White House staffing as well, including the kitchen. It was the tweet, though, that really seemed to get a big response. 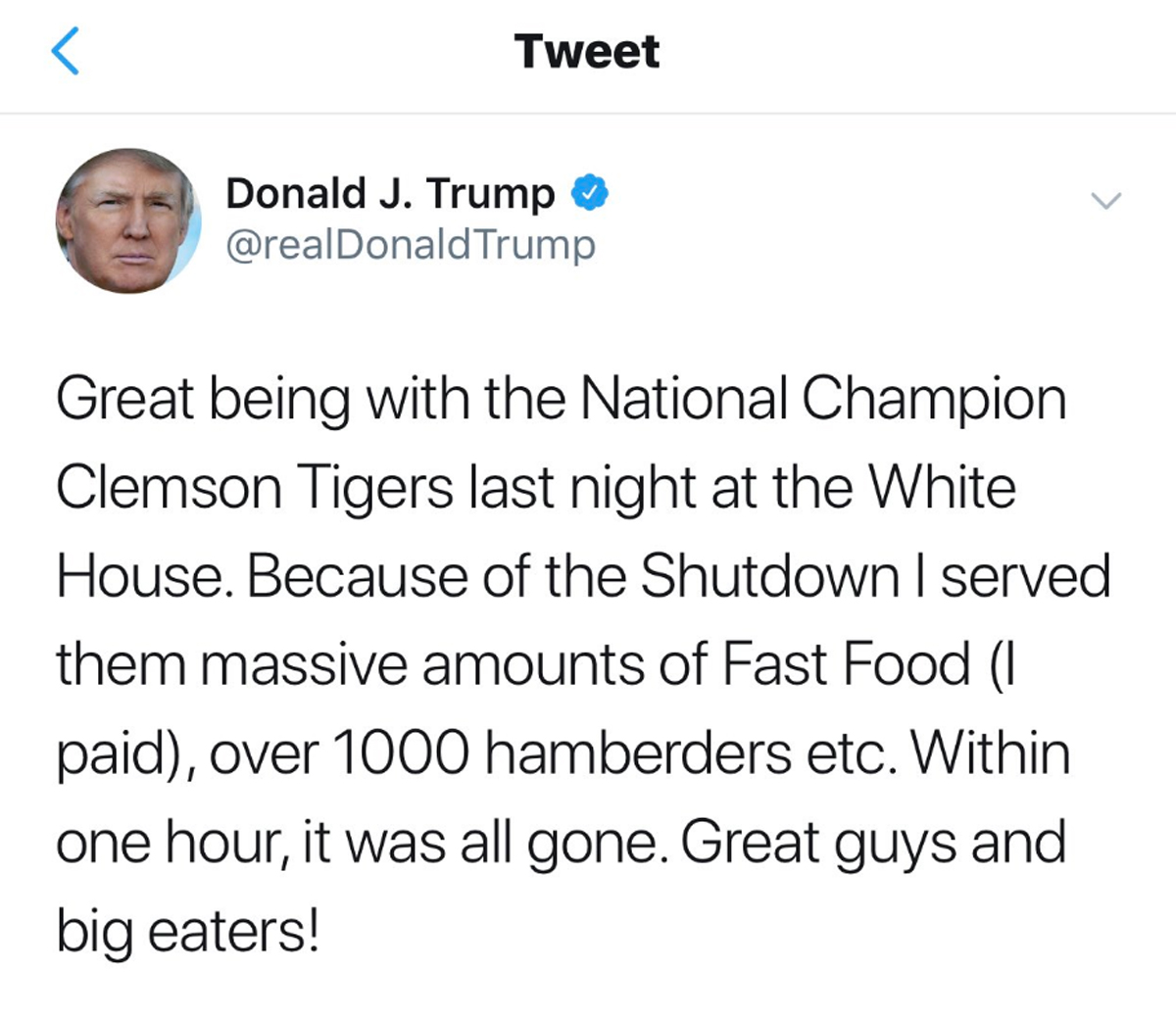 Trump is no stranger to the odd misspelling (while it was “unpresidented,” I can’t include covfefe as one because it remains a head-scratcher), so “hamberder” seems like a strange thing to fixate on. How about the idea instead that top athletes would be rewarded for their achievements at the White House with artery-clogging, high-cholesterol “hamberders,” along other assorted greasy gut-bombs? Isn’t that more worthy of jeers?

While Trump has his own preferences (a reported favorite meal of two Big Macs, two Filet-o-Fish, and a chocolate shake, which adds up to 2,690 calories and 340 milligrams of cholesterol, depending on the size of the shake but let’s say it’s large because, well, we’re talking about Trump), high-performing college athletes are a different matter. With trends showing universities meeting the increasing demand for plant-based options and a growing number of elite athletes swearing by the performance benefits of an animal-free diet (including burly football players) the juxtaposition of fast food on silver platters at the White House wasn’t the only thing that seemed deeply inharmonious; it was also offering heart- and artery-wrecking fast food to young athletes that felt so incompatibly incongruent. Perhaps in another era, when mystery meat was the norm and eaten without question, it may not have seemed strange. But today, when so many young people are aware and concerned about doing less harm to themselves, the planet, and other animals, Trump’s staged photo op behind neatly piled stacks of fast food seemed all the more awkward and out-of-touch even for an individual not exactly known for his appropriateness and ability to read a room. (Oh, also talking about the appetites of young adults as if they’re a bunch of toddlers is also unseemly, but I will leave that alone.)

While this was yet another black eye to a nation getting used to feeling punch-drunk with public embarrassment at this point, it presents us with an opportunity to look at the big picture and remind ourselves that no matter what a certain Very Stable Genius offers guests in the historic rental building bankrolled by US taxpayers—hey, like the fast-food industry—it has no bearing on the direction the nation is heading. As defensive lineman and vegan David Carter said, “Being vegan is not only the most efficient way to be full-body strong, it’s also the most humane. Everyone wins.”

And no matter how much Trump would spin it, I assure you, this is not fake news. Now pass me a Beyond Burger.

Marla Rose is co-founder of Vegan Street Media and packs a mean snowball in Chicago.