There was once a time when vegan holiday meals were extremely limited. Years ago, when celebrating amongst a mixed company of eaters, vegans had to make their own plant-based feast for one or scavenge through the few veggie sides that didn’t include butter, cream, or meat drippings. The vegan food market has dramatically evolved since then— particularly within the plant-based meat category—and vegan holiday roasts are officially “in.” Keep reading to find the perfect festive vegan centerpiece that everyone will enjoy. 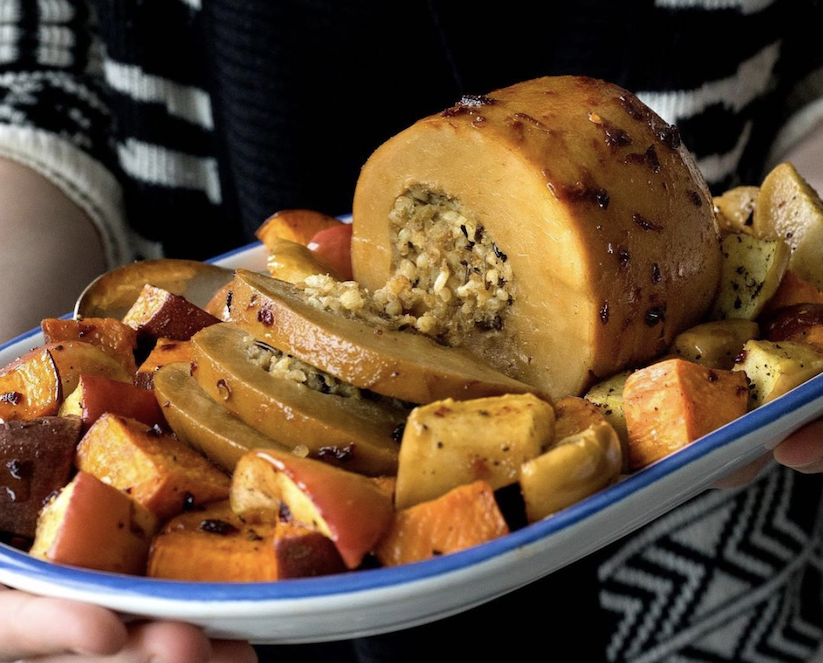 Tofurky, founded in 1979, is a veteran in the vegan roast market. The all-natural, plant-based company launched commercial production of its signature Tofurky Holiday Roast in 1995 and built a loyal fanbase throughout the decades. In 2018, the company had officially sold 5 million Holiday Roasts. It’s no surprise. The tender, savory roast is made of seasoned seitan and tofu, giving it a meaty chew and satisfying taste. The round is filled with wild rice and breadcrumb stuffing and comes with a side of vegan gravy. Beyond the original, Tofurky fans can opt for the year-round Everyday Ham Roast, Ham Roast with Amber Ale Glaze (seasonal), or pick up an entire holiday meal with The Feast. The box is packed with an original Holiday Roast, gravy, and nondairy chocolate cheesecake. Tofurky is making it easier than ever to have a very happy holiday.
Find it here 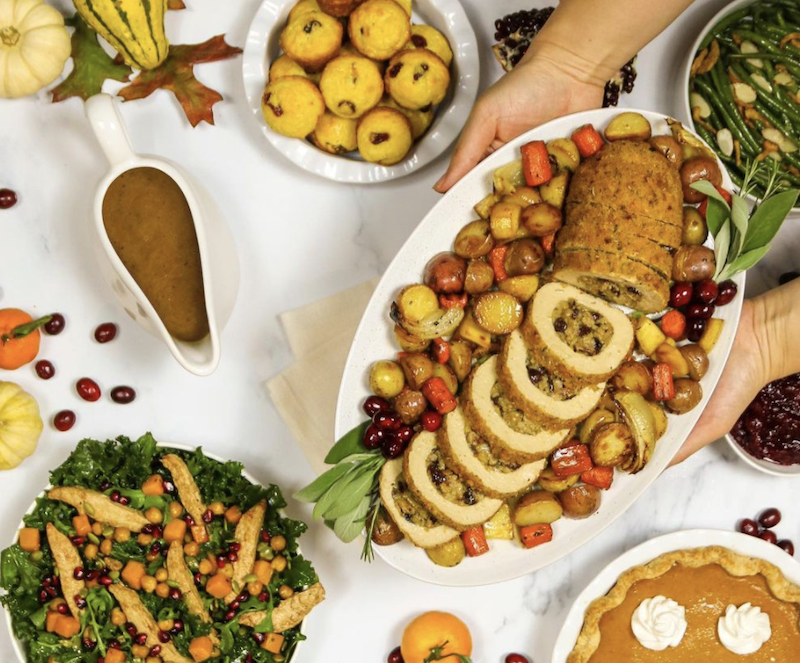 Like Tofurky, Gardein is another company that helped to popularize plant-based meat. Come holiday season, Gardein offers two outstanding main meal options. The Savory Stuffed Turk’y includes two individual-sized breaded Turk’y roasts that are crispy on the outside and tender on the inside. Each is filled with moist, wild rice stuffing studded with tart cranberries. The box also includes a packet of gravy. Gardein’s more traditional Holiday Roast is similar; it also includes the cranberry wild rice stuffing and a crispy-breaded exterior, but the package contains one large roast big enough to serve eight (including gravy, of course). Pick up the Turk’y if it’s just for you or choose the Roast to feed a crowd.
Find it here 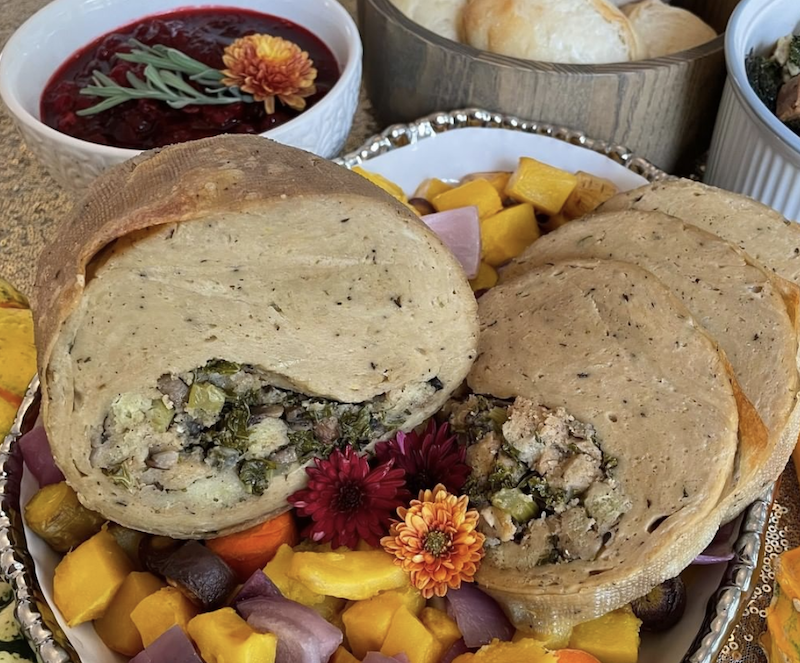 Based in Minneapolis, MN, The Herbivorous Butcher has garnered national attention. The growing brother-and-sister-run company was even featured on the Food Network’s hit show, Diners, Drive-Ins, and Dives. The Turkey-Free Feast ships nationwide and contains an assortment of vegan holiday meats and cheeses including a 2.5-pound Stuffed Turkey, Maple Bacon, Fig Brie, Portuguese Sausage, Olive Havarti, and a bag of Kelly’s Croutons for stuffing. An Unstuffed Turkey Roast, meatloaves, and a wide selection of cheeses are also available to purchase and ship a la carte.
Find it here 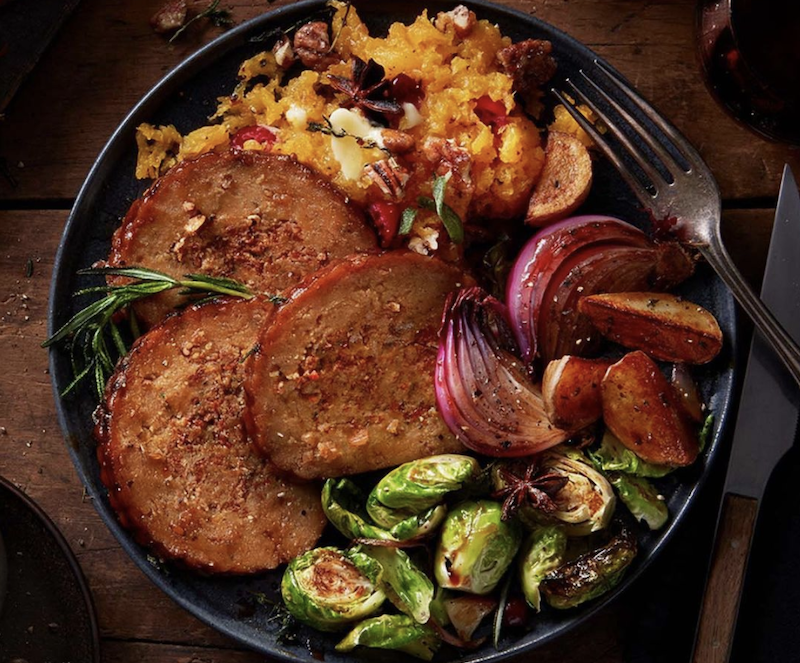 What’s better than a succulent vegan holiday roast? A vegan holiday roast wrapped in puff pastry. Field Roast’s Hazelnut Cranberry Roast En Croute features hazelnut-infused vegan meat stuffed with rosemary, candied ginger, and sausage stuffing, all encased in a layer of buttery, flaky puff pastry. The company’s other option, the Celebration Roast, is equally appealing, with different flavor notes. The sage- and garlic-rubbed roast is filled with a traditional bread stuffing dotted with butternut squash and cranberries, accompanied by a packet of flavorful porcini mushroom gravy. Can’t decide between the two? Get both. They freeze well!
Find it here 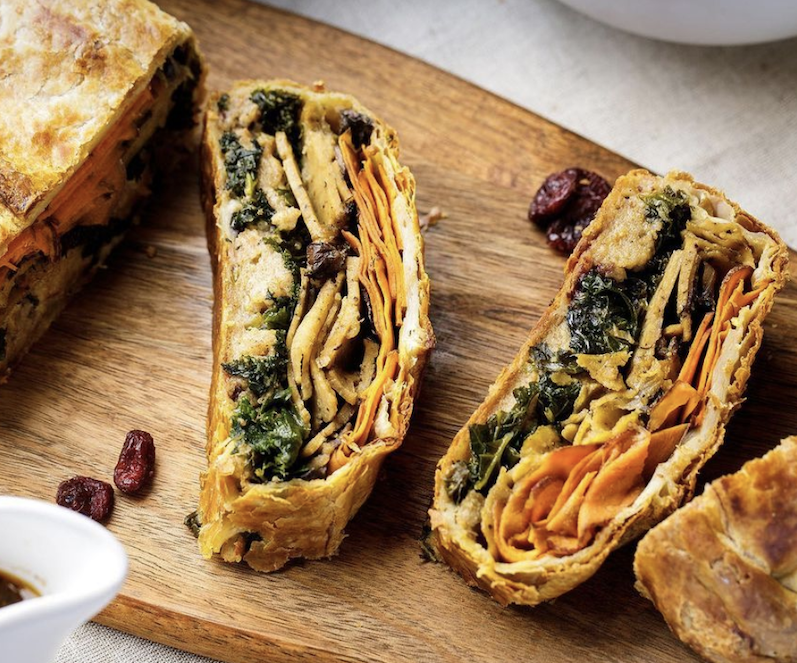 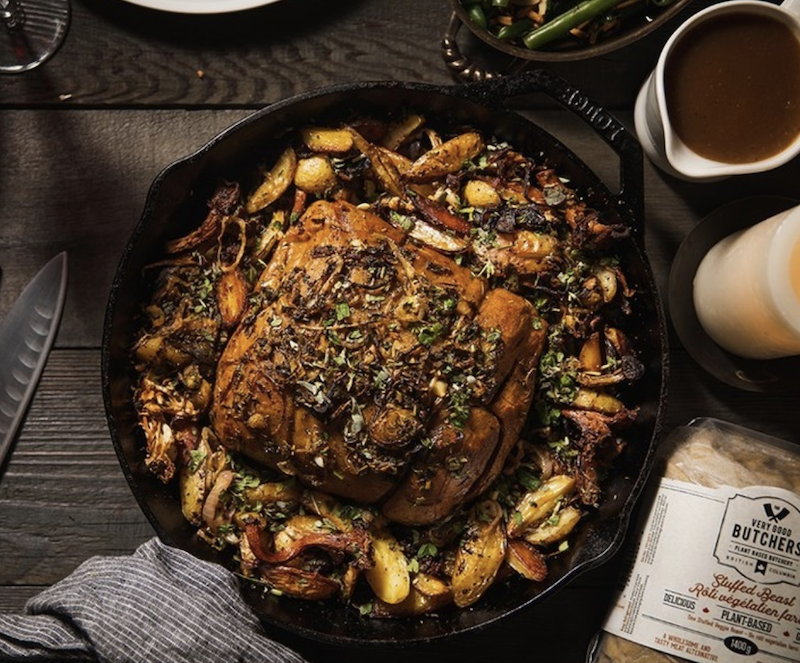 The Stuffed Beast is for stuffing-lovers. Cut into this succulent seitan-based roast and prepare for an outpour of seasoned stuffing goodness. This vegan butchery is based in Canada, but it ships to the US and UK as well. Place your order sooner than later, as they’re very likely to sell out. Missed your chance? The maple mustard-coated Roast Beast is another stellar option.
Find it here 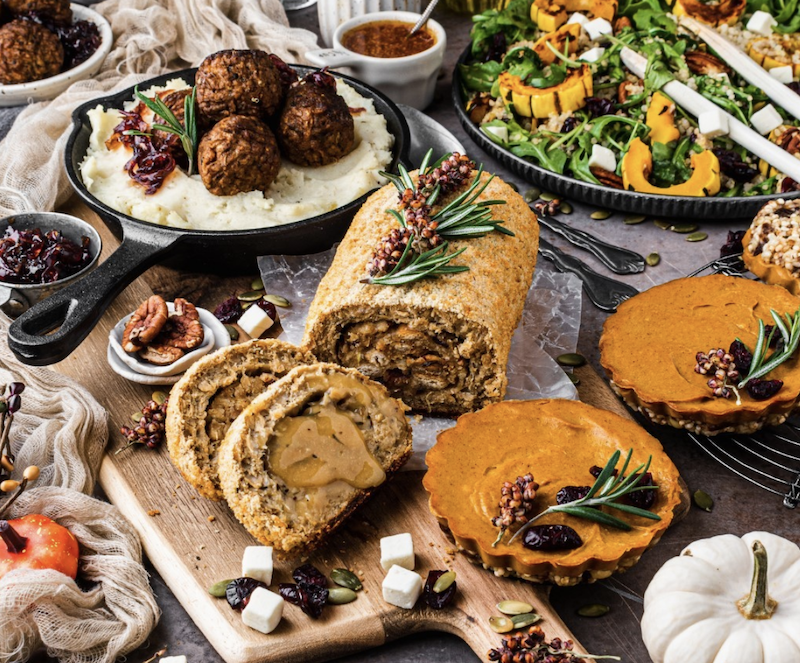 Canadian Thanksgiving has passed, but this limited-edition Stuffed Turk’y Roast with Gravy can certainly be served for the winter holidays. This juicy, breaded seitan centerpiece is packed with cranberry-studded stuffing and is best served in a pool of warm, silky gravy. While some Sol Cuisine products are available in the US, this latest item is only available in Canadian stores.
Find it here 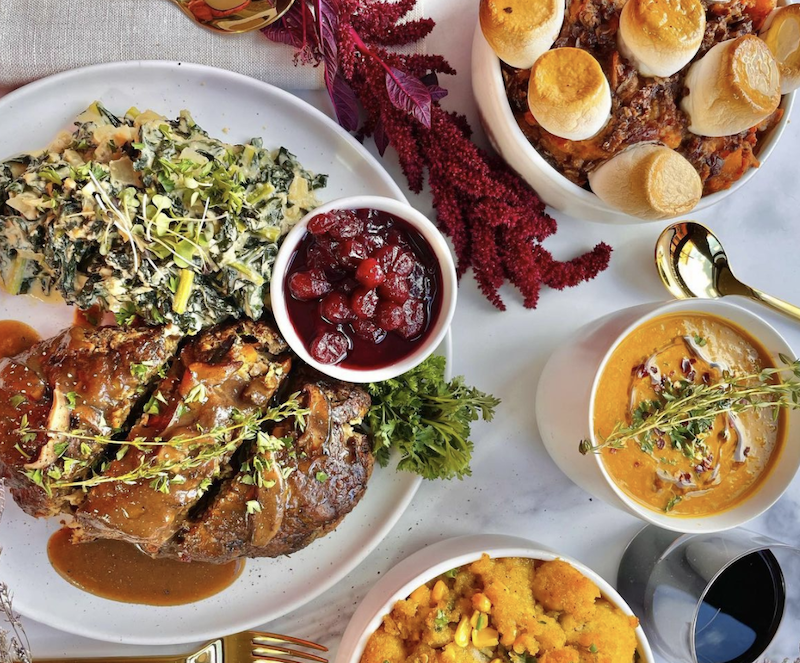 Chef Chloe Coscarelli extended her partnership with Whole Foods to bring back her curated vegan Thanksgiving favorites. If you missed out last year, don’t make that mistake again. The grocer is offering Coscarelli’s Cremini Mushroom Roast with Mushroom Gravy along with a medley of sides including Green Beans with Roasted Shallots, Coconut Sweet Potato Casserole, and Jalapeno Cornbread Dressing (aka stuffing). Decided to throw a last-minute Friendsgiving? Head to the freezer aisle and pick up a 365 by Whole Foods Market Plant-Based Roast. The breaded, seitan-based centerpiece is filled with cranberry-speckled stuffing and includes a packet of vegan gravy. Is it as sumptuous as Coscarelli’s main? Not quite, but it’s certainly satisfying in a pinch.
Find it here 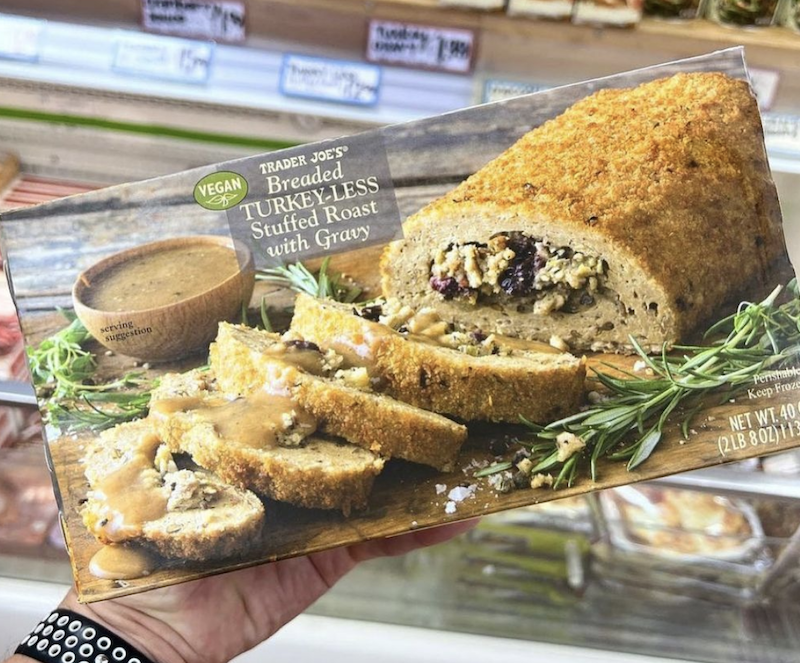 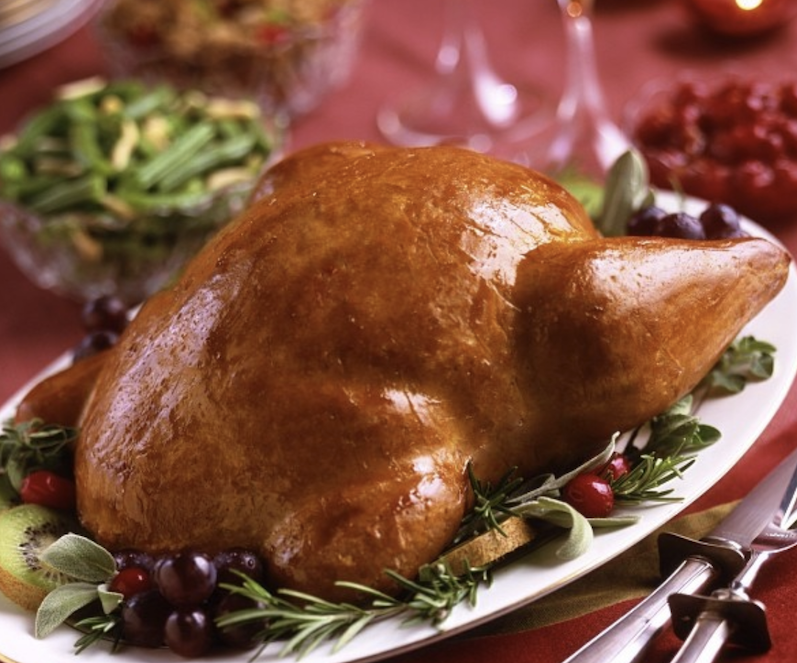 Expect a few double-takes from your guests as you plant this golden vegan turkey on the table. It’s entirely plant-based, but it looks like a traditional bird right down to the golden crispy “skin.” Carve it up to reveal its juicy interior and serve with a side of tender stuffing and gravy—both included in the box. Find it here