Two years after the first vegan beef burger was introduced to the public on a nationwide scale (thank you, Burger King), McDonald’s has finally launched a plant-based burger of its own thanks to a partnership with vegan brand Beyond Meat. The American-born chain says that it’s been working on the McPlant for three years with microscopic testing markets in Europe and Canada. Now, the plant-based-as-is sandwich is rolling out to 250 UK and eight US locations—its largest distribution yet (and first foray in the US). So where can you get it, and is it vegan? Here’s the latest on the McDonald’s McPlant. 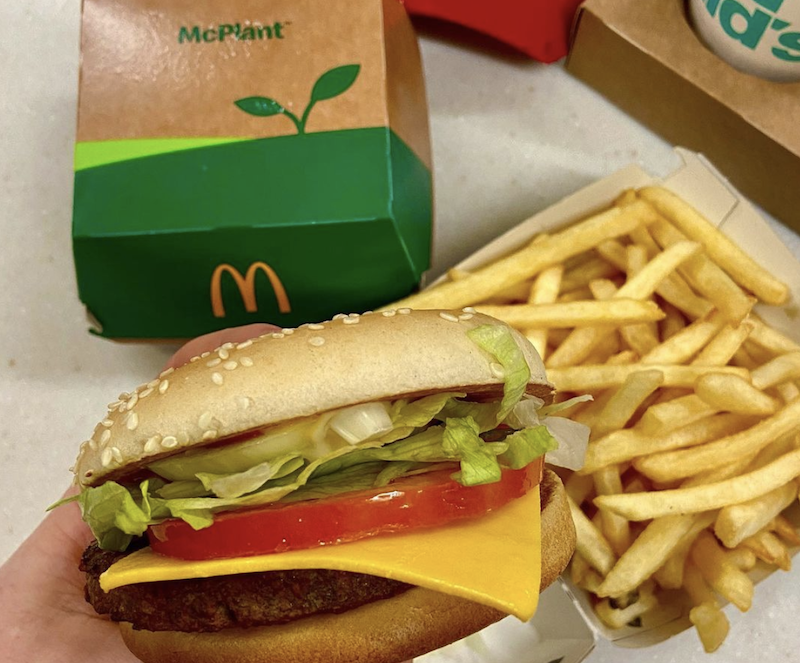 While certainly the most buzzed-about meatless offering, the McPlant isn’t McDonald’s first foray into plant-based options. The behemoth burger brand has launched a few veggie sandwich items—just not in its home country. The currently discontinued Vegetable Deluxe debuted in Europe and the UK in 2018 and was made with two red pepper pesto goujons (breaded and fried veggie sticks), iceberg lettuce, and sandwich sauce. Depending on the location, the handhold could be vegan—it all came down to the sauce. Some McDonald’s kitchens continued to use a sauce recipe with egg, while others removed it for a completely plant-based, creamy sauce.

In 2019, McDonald’s first showcased the burger currently known as the McPlant in 28 Ontario, Canada locations. Back then, it was called the P.L.T. (Plant, Lettuce, Tomato) and featured a vegan patty formulated for McDonald’s by Beyond Meat. In addition to tomato and lettuce, the beefless burger was accompanied by a slather of mayo-style sauce, mustard, and a slice of processed cheddar cheese. After 12 weeks, the test was complete and the offering was removed from McDonald’s menu. In February 2021, the P.L.T. reemerged in select Swedish and Denmark locations as the McPlant. Still served with cheese- and egg-based mayo, the sandwich was removed from these test locations in April.

Aside from burgers and sandwiches, McDonald’s UK carries a few vegan-friendly menu items to complement the main meal. French fries, hash browns, apple slices, baby carrots, and Veggie Dippers are all fair game for the plant-based crowd. A similar spread (minus the Veggie Dippers) is available in the US with the exclusion of the fries. While stateside Mickey D’s swapped out the beef fat for vegetable frying oil in 1990, the chain added beef flavoring so the McDonald’s fries in the US are not vegetarian or vegan.

The McPlant will be available at select US locations beginning November 3. Unlike its British counterpart, the meatless sandwich in the US is only being tested at a very select number of locations—just eight, to start. From November 3 until sold out, you can find the McPlant at these select McDonald’s locations.

Likely due to the pressures of the dairy lobby in the US, the American McPlant is not vegan as-is. The sandwich is made with the same Beyond Meat-formulated patty, but it comes with animal-based mayo and American cheese in addition to the standard lettuce, tomatoes, onions, ketchup, mustard, and pickles. The sesame seed bun is vegan, so plant-based patrons can get a taste of this new offering by ordering without mayo or cheese (note: unlike the UK, the US McPlant shares cooking surfaces with non-vegan items). 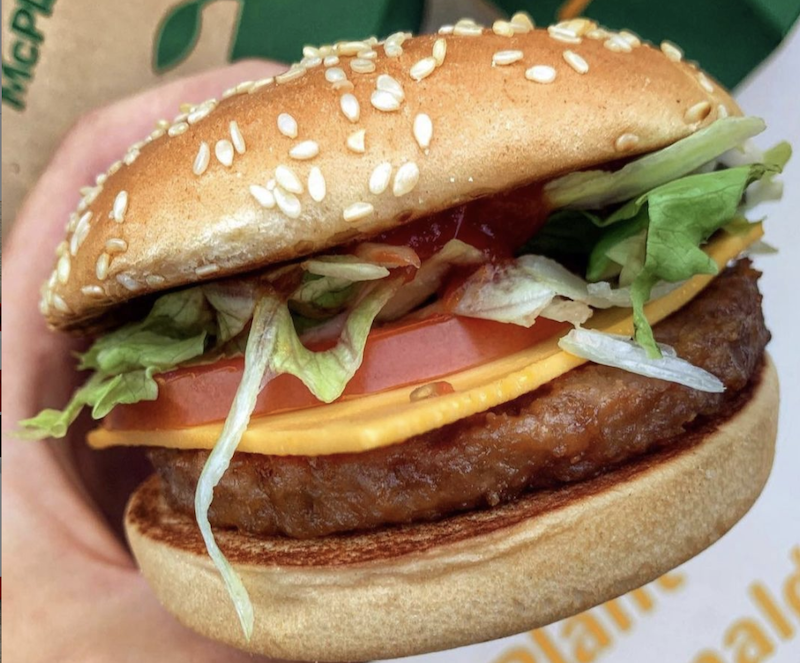 A vegan spin in the UK

Following months of hibernation after select test runs across the world, the McPlant has also resurfaced in the UK, but with a vegan facelift. Now being tested in 250 UK locations until January 2022, the Beyond Meat-based burger comes with ketchup, mustard, onions, pickles, tomato, and a slice of vegan cheese on a sesame seed bun. Unlike many fast-food vegan burger options, the McPlant will be prepared with dedicated, vegan-friendly cookware and utensils to avoid animal product cross-contamination.

England and Ireland residents—curious if your local Mickey D’s carries the McPlant? Here are all the locations that serve it … given it hasn’t sold out.

For more on vegan fast-food burgers, read:Fatburger Expands Vegan Cheeseburger to All Locations
The Vegan Guide to Plant-Based Eating at Burger King
The Ultimate Vegan Guide to Carl’s Jr.

How to Eat Vegan at McDonald’s