Starbucks’ cult-classic Pumpkin Spice Latte has been around since 2003.  In the nearly 20 years since its inception, the coffee behemoth has expanded its non-dairy milk offerings and introduced a number of vegan-friendly options (such as this summer’s Iced Chocolate Almondmilk Shaken Espresso). But it has yet to remove the dairy in its Pumpkin Spice Syrup, making the fall favorite impossible to order vegan (at least, not in the States. The UK has a vegan version). While not as far-reaching as Starbucks, Peet’s Coffee is putting the pressure on this fall. Known for its dark roast coffee, the chain is leaning into the pumpkin craze with its new vegan-friendly Pumpkin Oat Foam Cold Brew, now available at all participating Peet’s coffee counters.

Peet’s Coffee has 339 locations in the US, with a vast majority (69 percent) of its stores in California. While this number doesn’t compete with Starbucks’ nearly 15,000 coffee shops in the US, Peet’s is posturing to become a competitor by creating its own, dairy-free take on Starbucks’ cold foam beverage concept. The Seattle-born chain has released a number of chilled caffeinated beverages crowned with sweetened, dairy-based cold foam. It even released a limited line of dairy-free cold foams in 2020—all of which are no longer available. At Starbucks, it’s no longer possible to order a dairy-free, pumpkin-spiced beverage, but what is impossible at Starbucks is now possible at Peet’s. 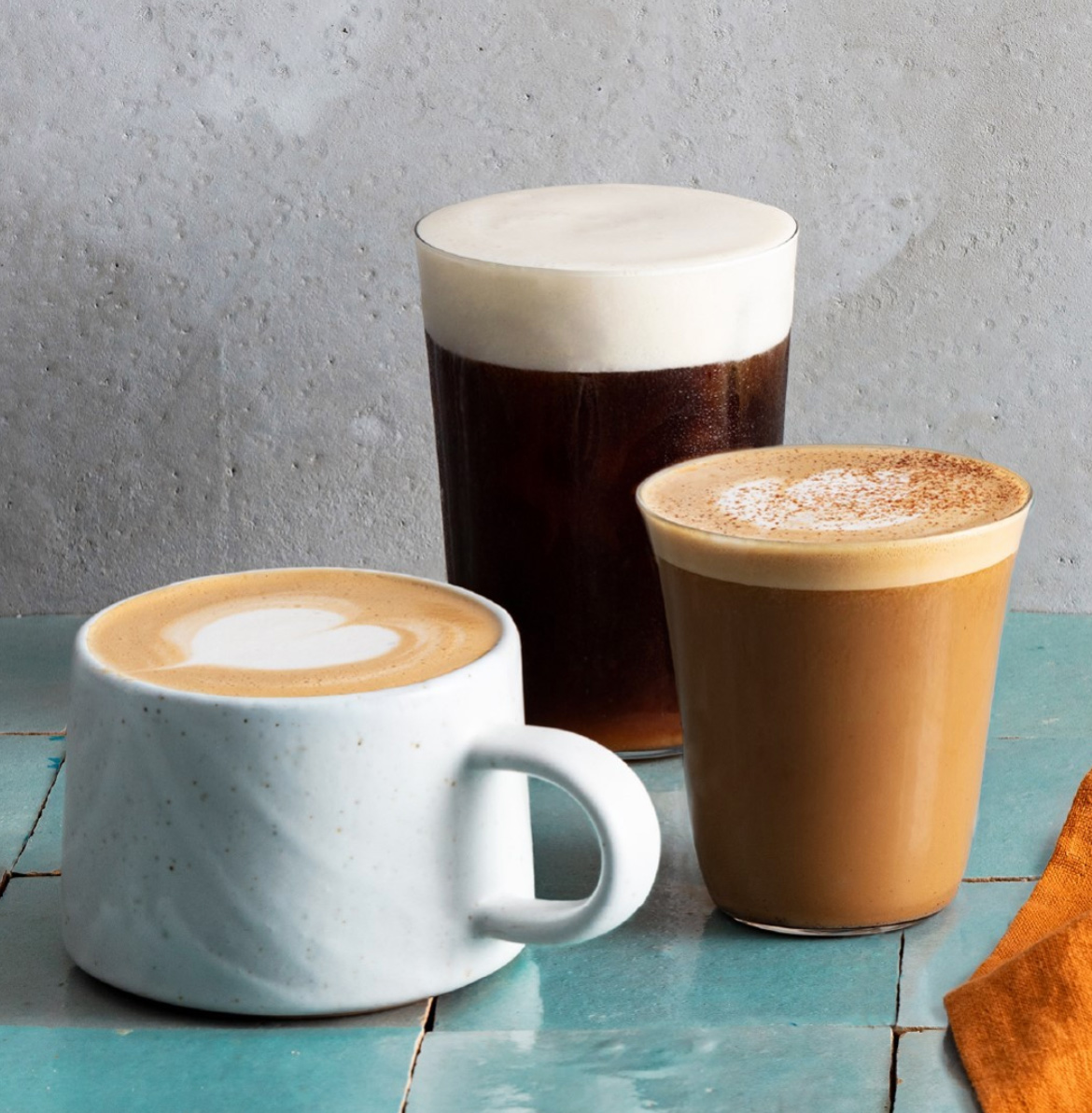 The new Peet’s Pumpkin Oat Foam Cold Brew provides the flavors of fall in the lasting heat of late summer. The vegan-as-is beverage is made with the chain’s Baridi Blend cold brew coffee that is layered with a sweetened pumpkin pie spice microfoam made from oat milk. The chain’s classic Pumpkin Latte has also returned to coffee shop menus. Unlike the Starbucks original, Peet’s pumpkin-flavored latte can be ordered vegan by swapping cow’s milk for non-dairy milk (oat, almond, or soy). 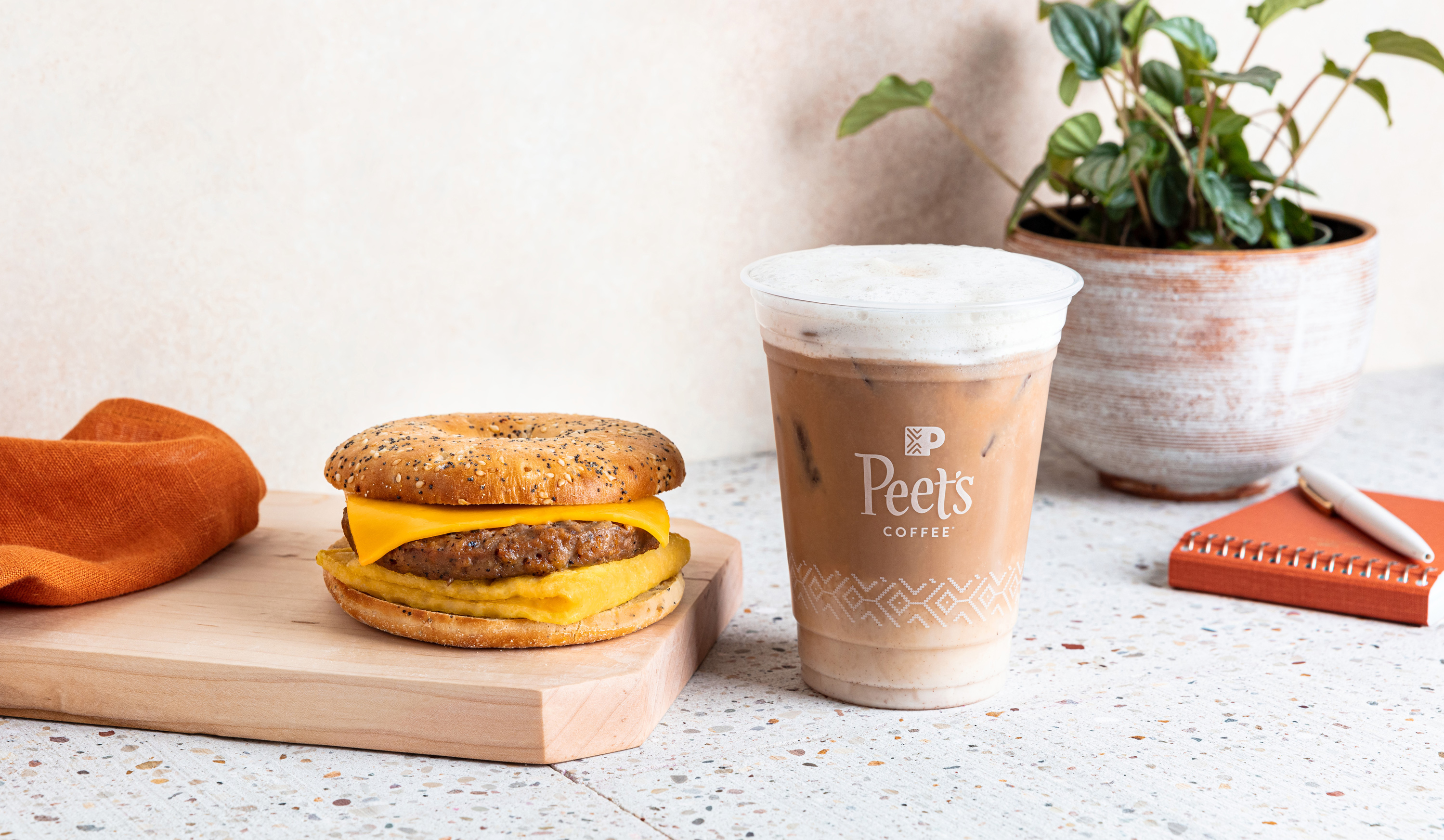 Plant-based Peet’s customers have enjoyed a steady selection of vegan options throughout the years. The chain was the first to introduce a coconut-based, dairy-free whipped cream back in 2016. While this sweet topping has been discontinued, other vegan options have lasted the test of time. Peet’s bakery cases typically feature at least one vegan option beyond the standard plain bagel and oatmeal (though Peet’s has these, too). Depending on the location, one can find a vegan peanut butter cookie, blueberry oat bran muffin, Guittard chocolate brownie, and more.

In 2021, a savory item joined these sweet baked goods. On the heels of Starbucks’ Plant Powered Breakfast Sandwich (which was only available in select test markets), Peet’s released its own version nationwide. The Everything Plant-Based Sandwich is a vegan breakfast sandwich made with a Beyond Meat Sausage patty, folded JUST Egg, and melted plant-based cheese held together between an everything bagel thin. Contrary to the name, this option is available at all hours of the day.

Want more fall beverage options? Check out our Essential Vegan Guide to Starbucks Fall Drinks. The PSL may not be vegan, but there are still plenty of other items to choose from. For more pumpkin spice flavored offerings, take a look at these 11 plant-based pumpkin spice products you can get right now.