Actress Alicia Silverstone is committed to shutting down factory farming, a mission she is particularly passionate about on Mother’s Day. The vegan activist recently partnered with nonprofit Farm Sanctuary to raise awareness about the cruelty inherent in factory farms, where mothers and families are ripped apart and exploited.

“Mother’s Day can be bittersweet when we think of the other species who just want to love their babies and are robbed of the opportunity to exercise their maternal instinct because of human greed and exploitation in factory farming,” Silverstone wrote in a letter posted to the animal sanctuary’s website.

The actress concluded her letter by asking readers to join her in “adopting” Hayes, a calf who was born into the dairy industry and lost his mother at a young age; goat Olive and her daughter Maggie, who was born shortly after Olive’s arrival at Farm Sanctuary; and sheep Amari and her daughters Laura and Bailey, born just ten days after Amari was rescued from slaughter. 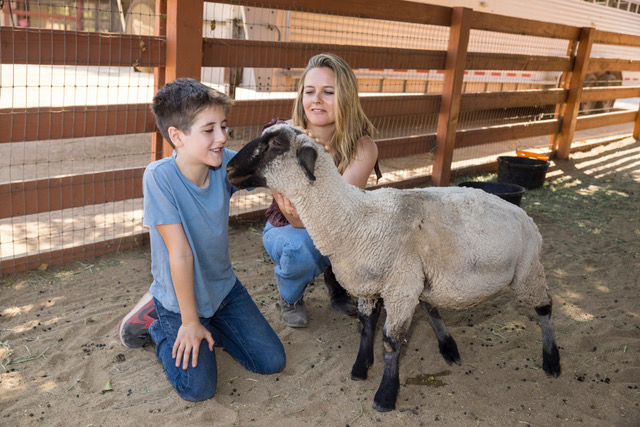 Silverstone encourages fans to “adopt” the rescued animals with a donation of $35 or more to help Farm Sanctuary continue “the life-saving work it does in animal rescue.”

Silverstone’s partnership with Farm Sanctuary is the latest advocacy work for the longtime vegan activist—a way of life she is teaching her son Bear Blu Jarecki, who has been vegan since birth. In 2020, Silverstone and her then eight-year-old son joined forces with People for the Ethical Treat of Animals (PETA) to recreate Paul and Linda McCartney’s iconic 30-year-old PETA advertisement. The ad bears a striking resemblance to the original, but instead of sending the “Go Veggie” message shown on Linda McCartney’s T-shirt, Silverstone wears an updated “Go Vegan” slogan. 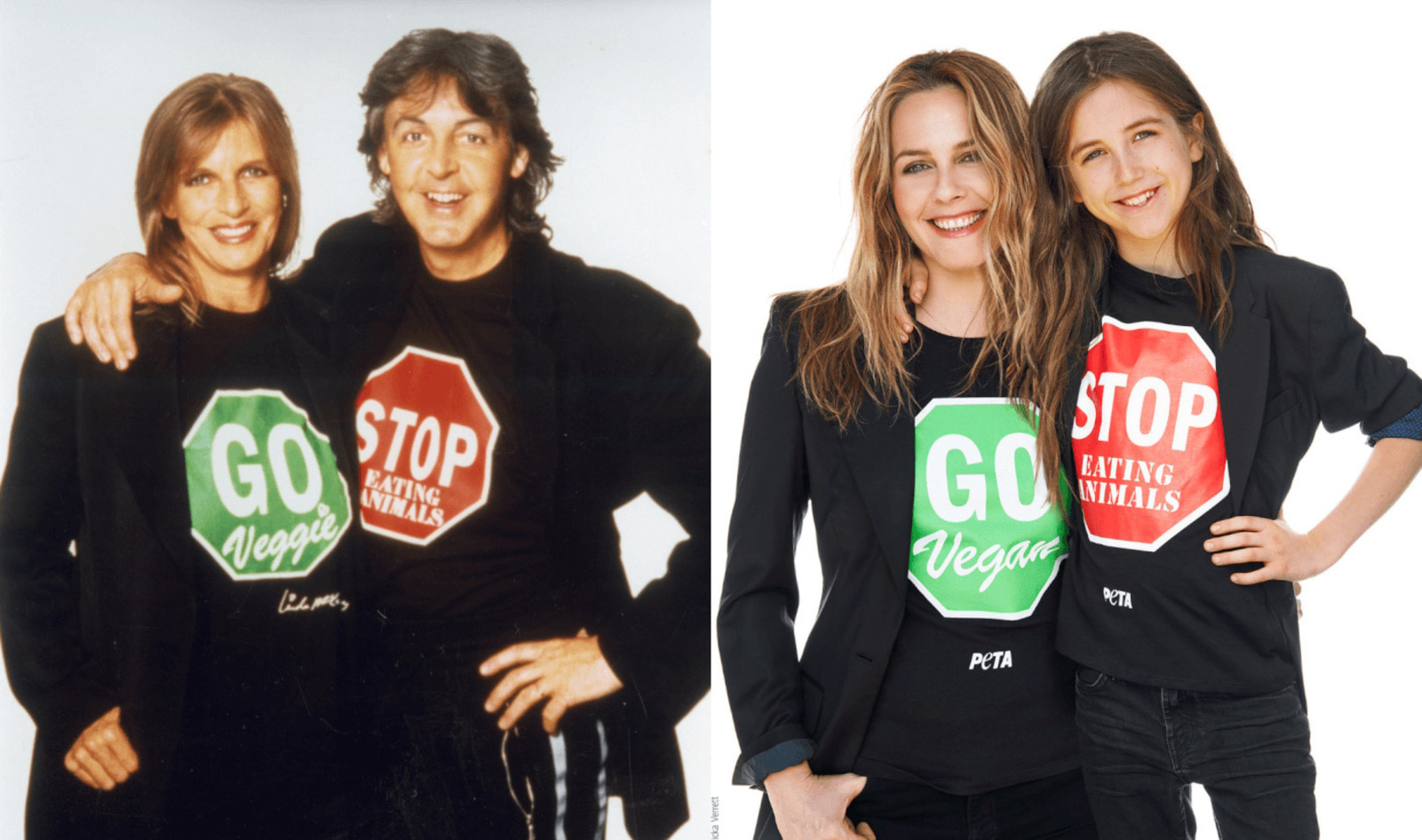 “Raising Bear with an awareness of animal sentience and compassion—not just for the animals we share our home with, but for the entire animal kingdom—has been my bedrock of being a Kind Mama,” the actress wrote in her Mother’s Day letter this week.

Over the years, Silverstone has used her fame in many ways to advocate for animals. Last year, Silverstone’s activism challenged Starbucks to drop its vegan milk surcharge. In a letter posted to her blog The Kind Life, the actress explained that she, along with other celebrity activists such as Alan Cumming, has been asking the coffee giant to drop its vegan milk surcharge. The extra charge, Silverstone noted, makes it difficult—and even inaccessible—for customers to make environmentally and animal-friendly choices. “These charges may seem small, but they penalize customers who are making humane and environmentally friendly choices,” she wrote. “It also penalizes people for issues they can’t control, like being lactose intolerant, which affects 65 percent of the population, predominantly people of color.”

Silverstone’s 2021 letter renewed her demand—which she made public in 2019—shortly after the coffee chain released its sustainability plan after an audit found that dairy was responsible for the majority of Starbucks’ global carbon footprint. Since then, the company has ditched the surcharge in the United Kingdom but has yet to do the same in the United States.

Vegan celebrities speak up for animals

With her call to action in honor of animal moms everywhere, Silverstone joins other celebrities in speaking up for animals on Mother’s Day.

In 2020, one day after winning the Oscar for Best Actor for his role in Joker, vegan actor and activist Joaquin Phoenix worked with Farm Sanctuary President and Co-founder Gene Baur to help facilitate the rescue of mother cow Liberty and her baby calf Indigo from a California slaughterhouse. The release was negotiated alongside a group of activists that included the actor’s fiancée Rooney Mara and both of their mothers. Three months later, just before Mother’s Day, Phoenix matched donations as part of a Mother’s Day gift to honor Liberty and Indigo. 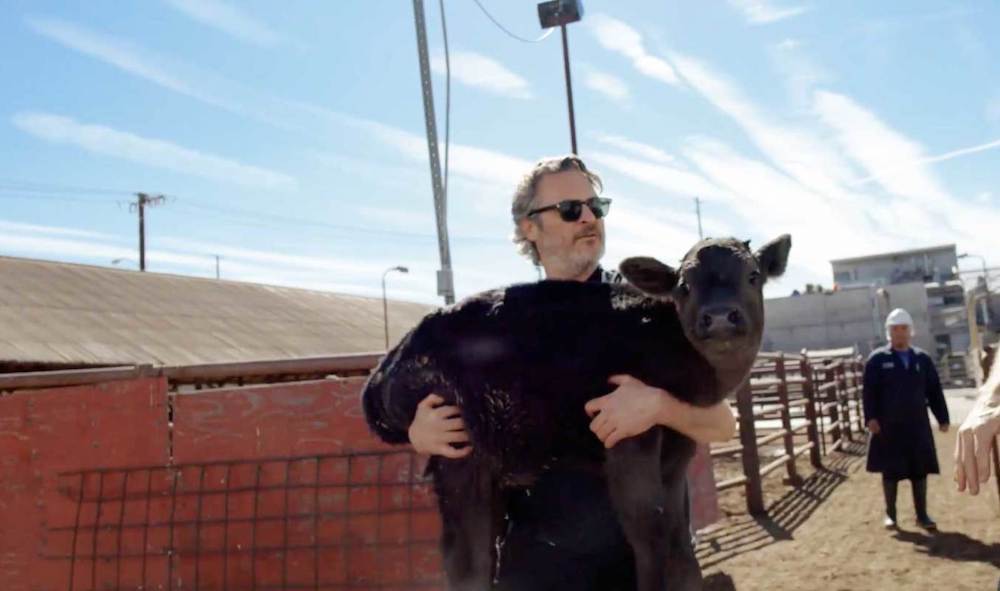 Just one year prior, actress Edie Falco—best known for her work on the HBO show The Sopranos—stood up for cows on Mother’s Day by demanding that Nestlé shift toward plant-based ice cream. Alongside Olympic soccer player and fellow vegan Kara Lang Romero, the actress reached out to Nestlé in a Facebook message, writing “Nestlé, show kindness to mother cows and their babies. Ditch dehorning and churn out vegan options.”

Their message came just one month after animal-rights organization Compassion Over Killing released shocking footage of mother cows being stomped, stabbed, and beaten and calves being burnt with hot irons to prevent horn growth at Pennsylvania’s Martin Farms, a Nestlé supplier. The pair urged fans to follow their lead and demand that Nestlé adopt kinder practices and make vegan ice cream.