What gives vegan burgers, nuggets, and hot dogs their meaty chew? For many brands and homecooked recipes, the answer is seitan. Pronounced say-tan, this vegan meat alternative has born the brunt of an endless supply of bad puns, but despite its unfortunate name, seitan is responsible for advancing plant-based products beyond the limitations of tofu and tempeh. Its uses are infinitely versatile in its mimicry of animal-based meat, and it also provides a substantial amount of plant-based protein. From the decades-old origin story to how to use it in your most beloved recipes, here is everything you need to know about seitan. 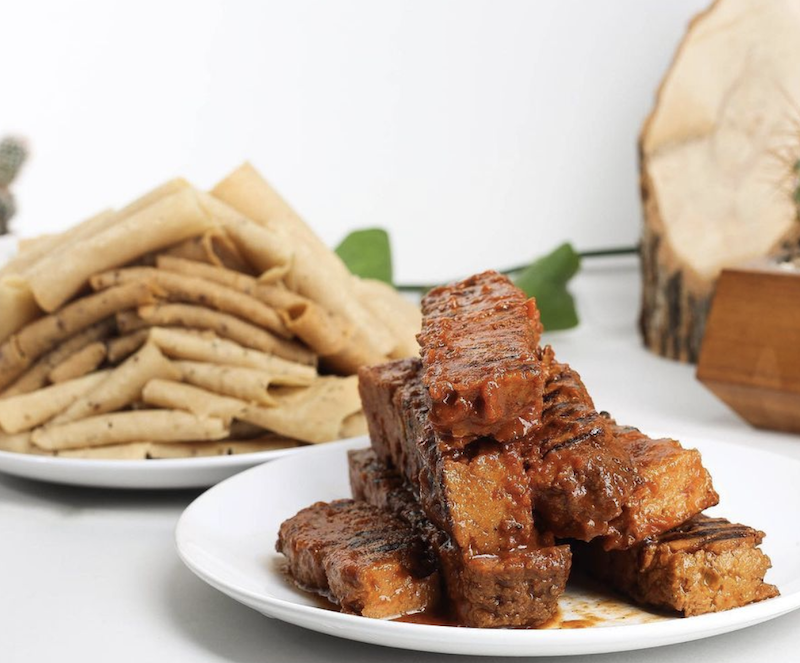 Seitan is a minimally processed form of plant-based protein. It can be flavored to suit a number of vegan meaty applications, but in its most basic form, seitan is largely made of vital wheat gluten and water. Which brings us to the follow-up question: what is vital wheat gluten? This substance looks like beige flour and is essentially pure gluten—the protein found in wheat and other grains. Celiacs and those who need or desire to avoid gluten should stop here, as seitan is staunchly a gluten-full food.

A very basic seitan loaf is made by kneading water and vital wheat gluten together then simmering the resulting loaf in more water or vegetable broth. From there, it can be sliced, diced, shredded, baked, fried, sautéed, steamed, or stewed depending on what the recipe calls for. Most store-bought seitan products and recipes you’ll find will add a few more steps to this process in order to flavor the seitan loaf before adding to a dish. Soy sauce, infused vegetable broths, and dried herbs are the most common seasoning agents.

Like tofu and tempeh, seitan originated in East Asia hundreds of years ago. The accepted story credits vegetarian Buddhist monks for seitan’s invention. In the US, seitan was adopted as one of the protein sources of vegan and vegetarian hippies. One of those hippies was Seth Tibbott—the founder of Tofurky. The original vegan Thanksgiving centerpieces were created from a blend of vital wheat gluten, tofu, and spices. While Tibbott wasn’t the only one selling seitan, Tofurky’s eventual success deserves some credit for popularizing the technique of turning this beige protein powder into succulent vegan meat alternatives. Today, brands such as Field Roast, Upton’s Naturals, Quorn, Gardein, Alpha Foods, Sweet Earth, and more rely on seitan to replicate craveable meaty meals.

Seitan is a nutrient-dense food that is notably low in fat and high in protein. A three-ounce serving of plain seitan contains about 130 calories, three grams of total fat (only 0.5 grams of saturated fat), 18-22 grams of protein, zero grams of fiber, and eight to 10 percent of the daily recommended amount of iron. The sodium content ranges between 300 to 400 milligrams, depending on the brand and recipe (some use soy sauce, which increases the sodium levels). Unless you are allergic or sensitive to gluten, seitan is a solid plant-based meat alternative. Granted, this nutritional profile can vary greatly depending on how seitan is prepared. If you’re breading and frying it, the saturated fat and calorie content will substantially increase.

How to prepare seitan

To make seitan from scratch, you’re going to have to put in some work. You’ll start by mixing vital wheat gluten with water and kneading it for several minutes. This dough will need to rest, followed by additional kneading if you’re adding flavoring elements to the seitan itself. Once mixed and rested, the seitan dough is very gently simmered for up to an hour in your choice of liquid. This can be as simple as water or boxed vegetable broth, or you can prepare a more flavorful simmering liquid with soy sauce, spices, liquid smoke, or wine. Like tofu and tempeh, seitan is a flavor sponge. Once simmered and removed from the broth, the seitan is ready to use.

Making seitan from scratch isn’t for everyone, and even if it does appeal to you, it may not be an every-week occasion. You can easily find store-bought seitan in both plain and seasoned varieties. If you opt for this more convenient route, all you have to do is remove the seitan from the package and apply it to your favorite dishes. Keep reading for our tried-and-true vegan recipes that make seitan the star. 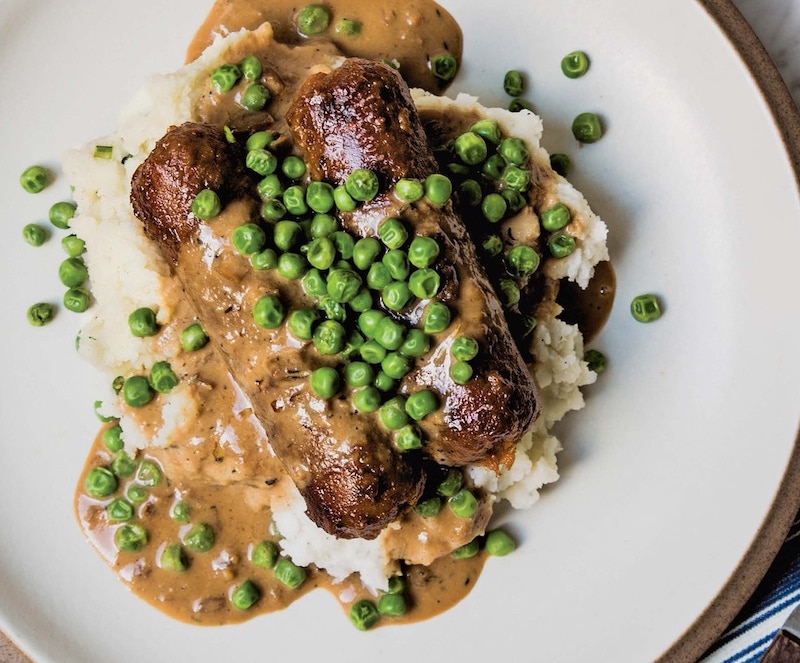 Vegan potstickers can be stuffed with more than just vegetables and tofu. Seasoned, seared, and crumbled seitan provides a meatier chew that better replicates the experience of biting into a pork-based dumpling. This shortcut seitan comes together in minutes as does the tofu-based cotijta filling. A package of store-bought dumpling wrappers makes quick work of this traditionally labor-intensive dish.
Get the recipe

This stick-to-your-ribs, wine-infused stew is perfect for the meat-and-potatoes crowd. Hearty pieces of savory seitan add texture and protein amongst the medley of vegetables soaking in a rich broth. Pro tip: when cooking with wine, always use a bottle you would happily drink. This is no place for sub-par wine.
Get the recipe

British or not, this classic UK dish of spiced sausages and mashed potatoes will warm your soul. This recipe does take a bit of time—you’re making everything from scratch from the seitan-based bangers to the fluffy potatoes and herbed gravy—but it’s a welcome departure from the same-old, same-old. Spend a lazy Sunday afternoon leisurely whipping up this main meal, and reward yourself with a pint come dinnertime.
Get the recipe

Wondering what to do with that store-bought pack of seitan you recently purchased? Transform it into succulent gyros. This Greek–inspired vegan meat works well in a number of applications—tucked into a fluffy pita pocket, tossed into a Greek salad, or simply served with hummus, tabouli, and tahini. A squeeze of lemon and a few simple herbs are all you need to get this seitan started.
Get the recipe

These days, we don’t want for lack of vegan fried chicken. You can find plant-based nuggets and tenders in most supermarkets, and there are even full-on vegan restaurant chains dedicated to this crispy, crackly, and succulent fried food. However, some store-bought options don’t have the cleanest ingredient label. If you’re looking to indulge without methylcellulose (an additive found in many processed vegan meats), this straightforward seitan recipe is it.
Get the recipe

Every time we sit down to a bowl of steaming-hot pozole, we wonder why we don’t enjoy it more often. This complex soup of hominy, seitan, beans, and spicy broth topped with crunchy tortilla strips and creamy avocado hits every textural element and flavor note to leave us completely satisfied. The addition of seitan really takes this soup over the edge to absolute contentment.
Get the recipe

Vegan or otherwise, sometimes you just want to embrace your carnal side and eat with your hands. Seitan is the star of this intensely meaty recipe featuring a sticky-sweet glaze and a lemongrass “bone” to grab hold of as you tear into each bite. Keep napkins at the ready—you’ll need them.
Get the recipe

For more vegan food guides, read:
9 Vegan Bacon Brands for Breakfast
What Is Tofu, Exactly?
16 Ways to Use Nutritional Yeast