An icebox cake contains neither ice nor cake, and you won’t find it in the freezer. This old-timey, all-American treat came to be through a confluence of marketing prowess and a craving for convenience. American innovation was on the rise, and refrigerators—or iceboxes—had just hit the market. At the same time, housewives were looking for easier options to put dessert on the table, and Nabisco needed to incentivize purchases for its now-iconic chocolate wafers. The simple yet genius trifle-like dessert was born, combining something crunchy and sweet with something whipped or pudding-like. The result is a chilled treat with tender, cake-like layers amongst a creamy “frosting.” Ideal for the home kitchen, it’s rare to find an icebox cake at a bakery, and even more rare to find a vegan version. It’s a niche dessert for sure, but when the specific craving hits, we can’t get enough. Here is everything you need to know about icebox cakes, plus seven ways to make them vegan. 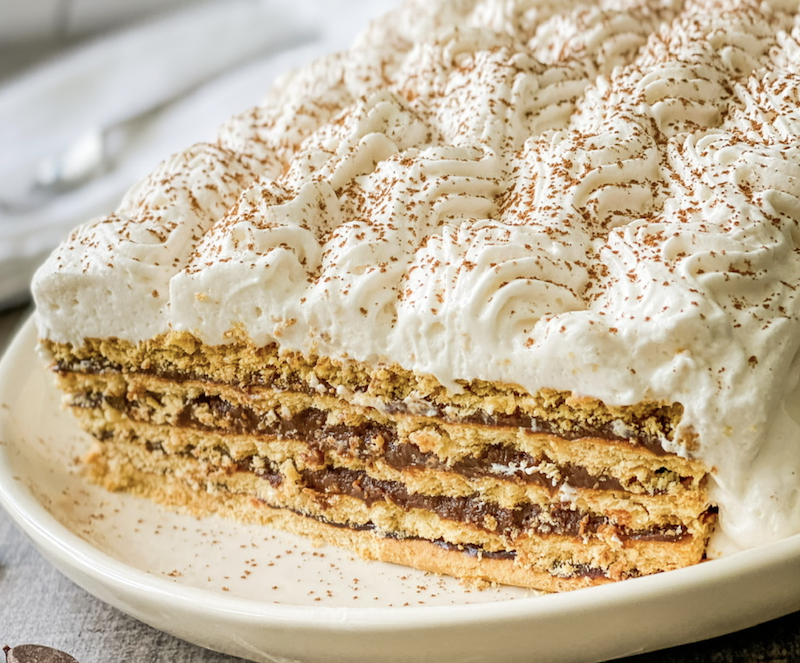 What is an icebox cake?

Iceboxes are to refrigerators as flip phones are to smartphones—the first predates the other. Iceboxes—essentially large insulated cabinets stocked with ice used to keep perishables cold in the warmer months—have been around since the 1830s, but it took some time for icebox cakes to start showing up in cookbooks. One of the earliest mentions of an icebox cake can be found in The Settlement Cookbook, published in 1915. However, these no-bake “cakes” didn’t truly hit their stride until the 1930s and beyond. Fully electric refrigerators had swiftly begun to replace traditional iceboxes by this point, and the marketers were ruthless. However, the new invention kept the icebox name, not switching over to the refrigerator term until several decades later. By the 1950s, eighty percent of rural and 90 percent of urban-residing Americans owned an automated icebox (aka fridge).

As electric iceboxes started trickling their way into middle-class American households, Nabisco launched its Famous Chocolate Wafers. As was popular at the time (and remains true today), the wafer tin included a printed recipe on the back. The recipe became known as the Famous Icebox Cake and called for just four ingredients—Nabisco Famous Chocolate Wafers, whipping cream, sugar, and vanilla. All a housewife had to do was whip up the cream with sugar and vanilla, spread between layers of Nabisco wafers, and let it set in the icebox overnight. What a hassle-free concept to yield such fantastic results! The genius of this recipe is the time in the fridge, er, icebox. As the dessert sits, the cream softens the crispy cookies and makes them delightfully tender (not soggy). The resulting consistency truly feels like biting into a moist cake covered in layers of whipped cream. It’s essentially foolproof—there’s no risk of burning anything or messing up measuring as is the case with actual cake. When Cool Whip came along in 1966, the icebox cake transformed into a two-ingredient dessert hack that could be prepared in minutes (minus the fridge time).

The popularity of icebox cakes has faded in the last few decades, but we don’t see why. It’s easier than making the now-trending mug cake and tastes fantastic every single time. Here’s to reviving the humble icebox cake—just make it vegan.

How to make icebox cake

The idea of an icebox cake is simple both in concept and execution. All you need is something sweet and crispy (say, a graham cracker or cookie wafer), something whipped or creamy (for example, pudding or whipped cream), and patience. Adornments such as fruit toppings, cookie crumbles, or sweet drizzles are completely optional. The assembly is as effortless as putting together a peanut butter and jelly sandwich—particularly if you’re using store-bought ingredients. In a trifle or any kind of deep serving dish, place a single layer of your crispy item. Evenly cover with your creamy item. Complete this layering until you have exhausted your ingredients. Pop in the fridge overnight, and voila, you’ve just made a foolproof and utterly delicious vegan icebox cake. 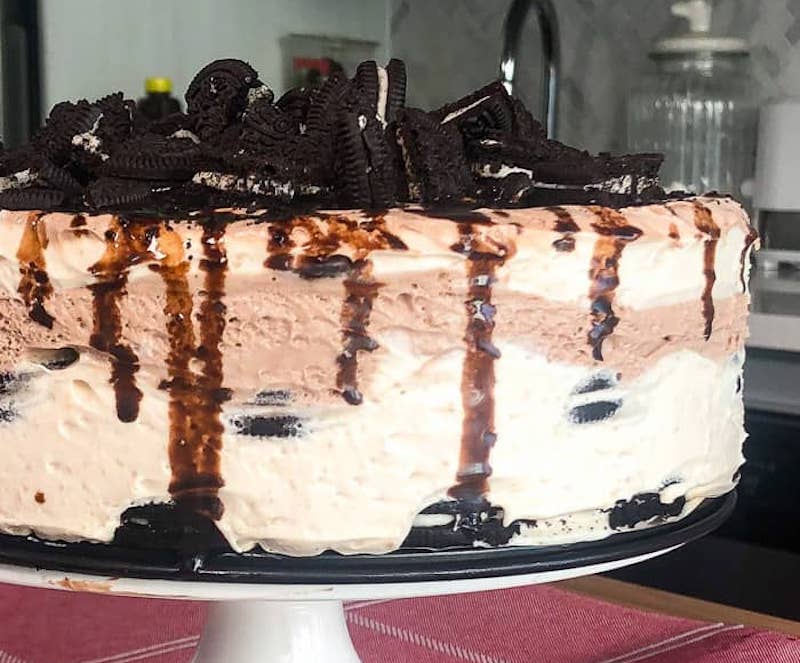 Venturing more into the cheesecake category, this hefty icebox cake is rich and decadent thanks to a peanut buttery, chocolate cream cheese filling. Combine that with cake-like Oreos, and anyone who loves to smear peanut butter on oat milk’s favorite cookie will eagerly ask for a second slice.
Find out more 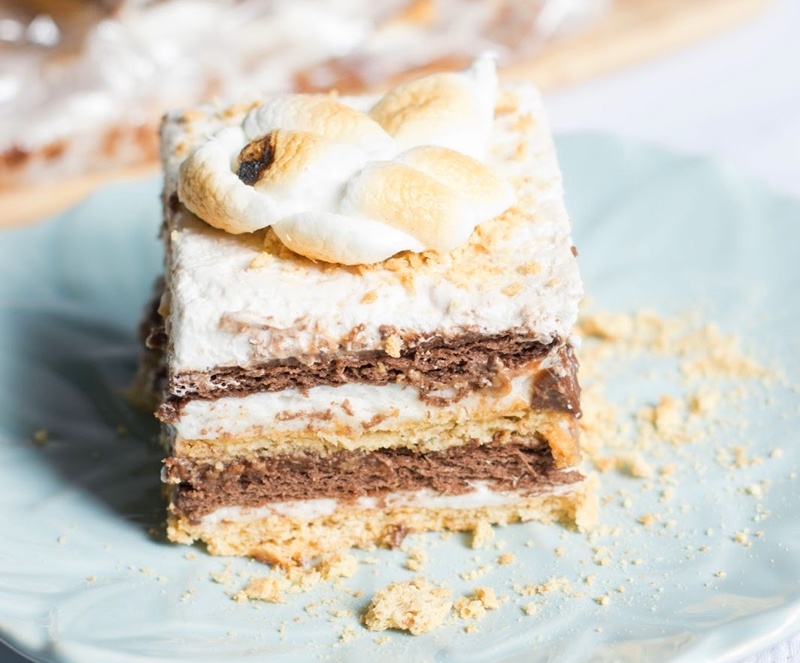 There is a lot going on in this deep-dish vegan icebox cake, and we are here for it. You’ll combine layers of tender graham cracker, homemade chocolate pudding, marshmallow fluff, mini marshmallows, and chocolaty drizzle to create one epic, summer-ready dessert. This showstopper definitely beats a blackened marshmallow any day.
Find out more 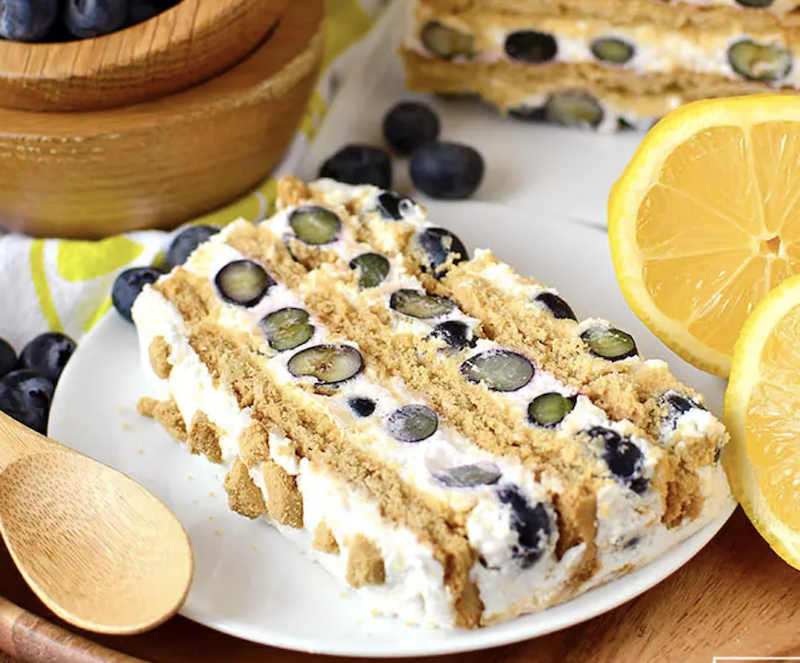 Really, any icebox cake can be made gluten-free simply by swapping in gluten-free wafers or graham crackers. This recipe specifically calls for S’moreables, which are vegan-friendly, but any vegan graham will do. Slightly more complex than the basic icebox cake, this treat combines store-bought staples with a homemade vegan lemon curd and fresh blueberries. It’s the perfect spring or summer treat for any kind of get-together.
Find out more 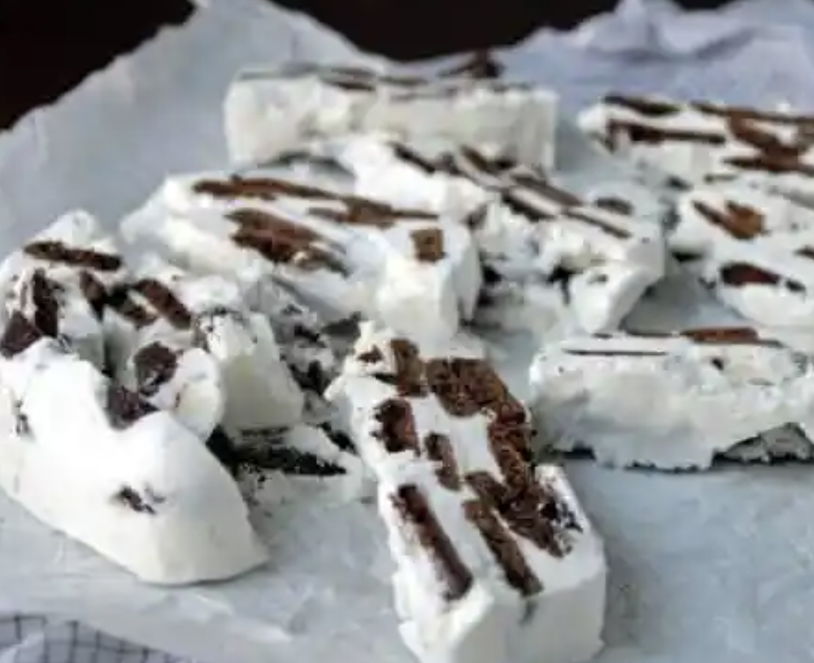 Heart of a Baker

This is the vegan incarnation of the classic Nabisco icebox cake. The recipe calls for making your own chocolate wafers and whipped cream, but those who would rather not turn on their oven can swap in Nabisco Famous Chocolate Wafers (yes, they’re vegan) and a tub of So Delicious CocoWhip. The most challenging aspect of this recipe is waiting for the cookies to soften the next day.
Find out more 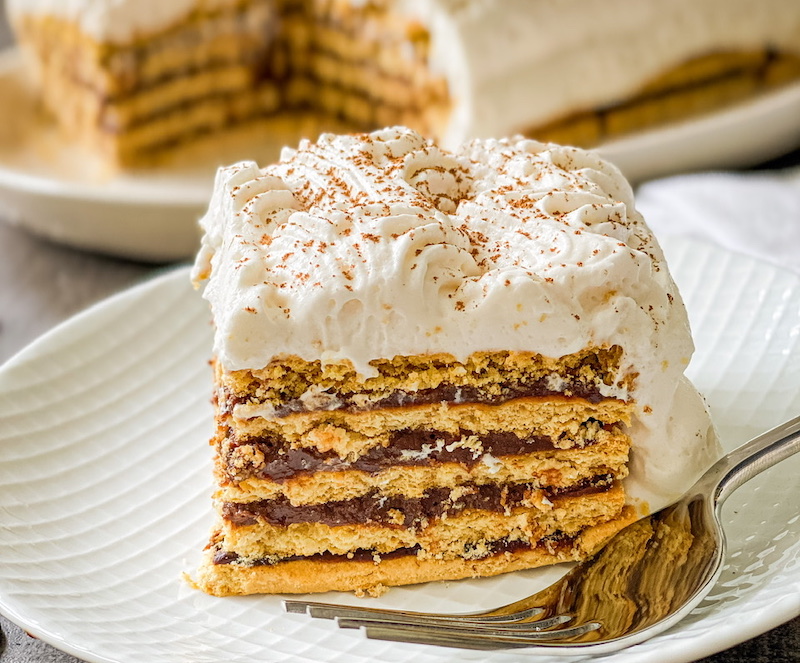 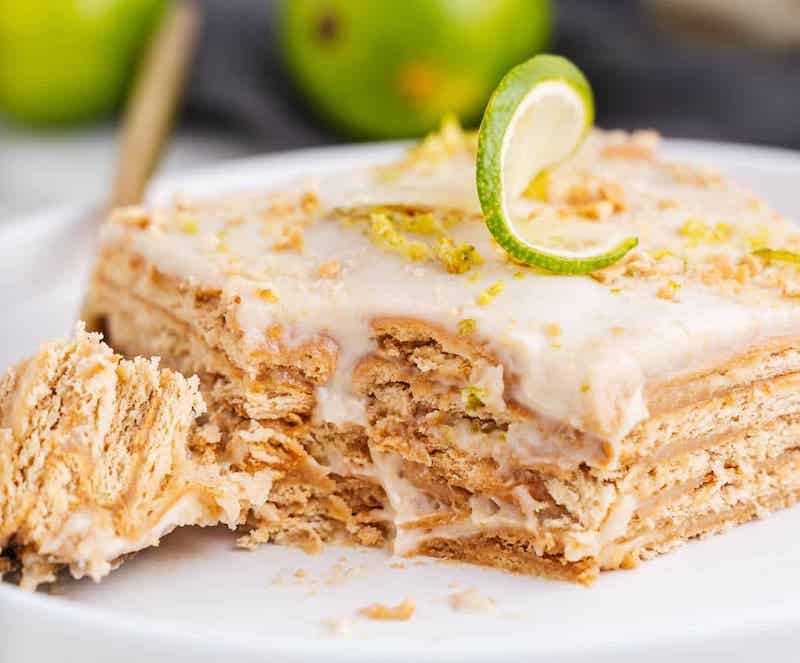 Refreshing yet rich at the same time, this version layers thin vanilla cookies with a lime-infused cashew cream. We highly recommend adding a tablespoon or two of rum to the cashew cream mixture for a party-ready dessert.
Find out more 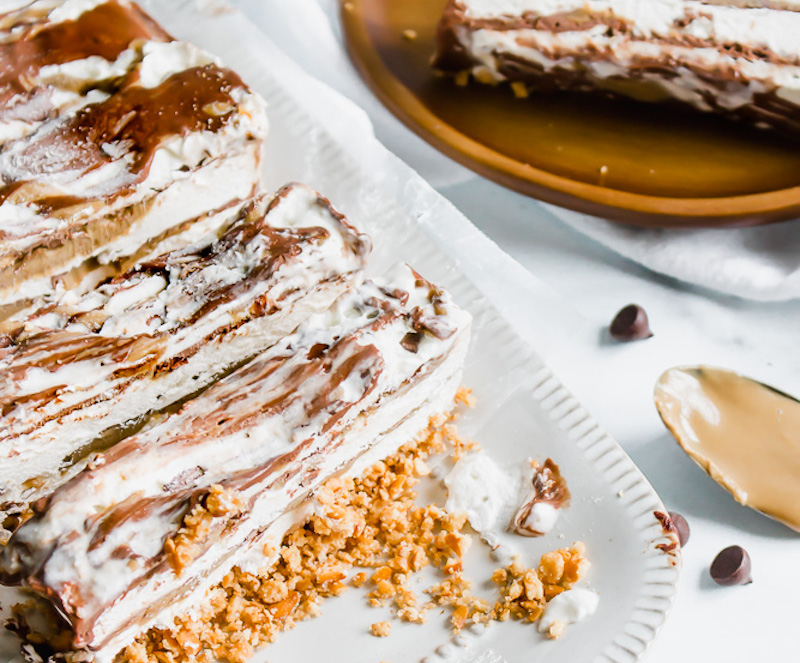 Combine your love for coffee and chocolate chip cookies with this foolproof recipe that relies on store-bought staples. Note: you’ll want to use crispy cookies, not the soft-baked variety. We tried it with Maxine’s Heavenly new crispy cookies and it worked well (they’re also gluten-free).
Find out more

For more on vegan desserts, read:
25 Accidentally Vegan Cookies
6 Fabulous Cakes You Can Pick Up at the Grocery Store
The 19 Best Vegan Doughnuts in the US