Cupid’s arrow guided animal lovers Hannah Hagler and Jesse Weseloh to each other while the two college students were at a charity fundraising event. “I saw Jesse from across the room and knew I had to get to know him,” says Hagler. Magnets to one another, the two spent all night talking, and have been inseparable since. Over a decade (and nearly two dozen foster dogs) later, it was their moment to get married. “We knew we wanted to take that next step and be a family,” says Hagler. 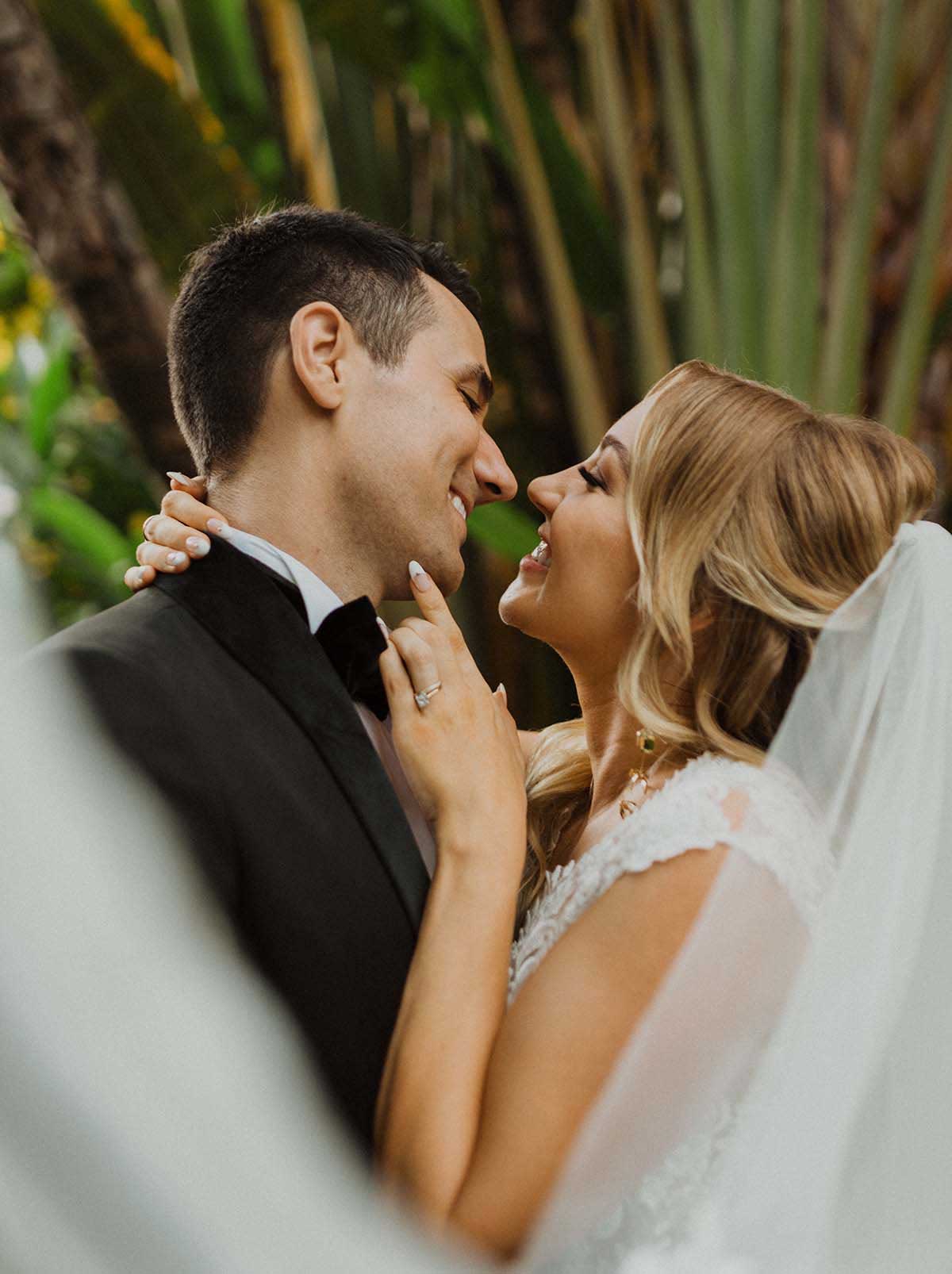 Weseloh surprised Hagler with a proposal while they were in Arkansas, visiting the bride-to-be’s grandfather. “He’s my favorite person on the planet,” she says. Weseloh popped the question at The Old Mill, in North Little Rock’s lush T.R. Pugh Memorial Park—a grand recreation of a 19th-century mill featured in the opening scenes of the big-screen classic Gone With the Wind.

Vegan influencer Hagler took to Instagram in search of the ultimate spot for their dreamy destination wedding, zeroing in on the colorful city of Mérida, Mexico to celebrate their longtime love. The pair kicked off their three-day romantic fête with a welcome party on the roof of the Rosas y Xocolate Boutique Hotel and Spa, where they gathered with friends and family as a rainbow appeared in the sky. Lounging with their guests in the tropical night air, two friends surprised the soon-to-be-wed couple by joining the house band on stage and serenading the bride and groom with songs. 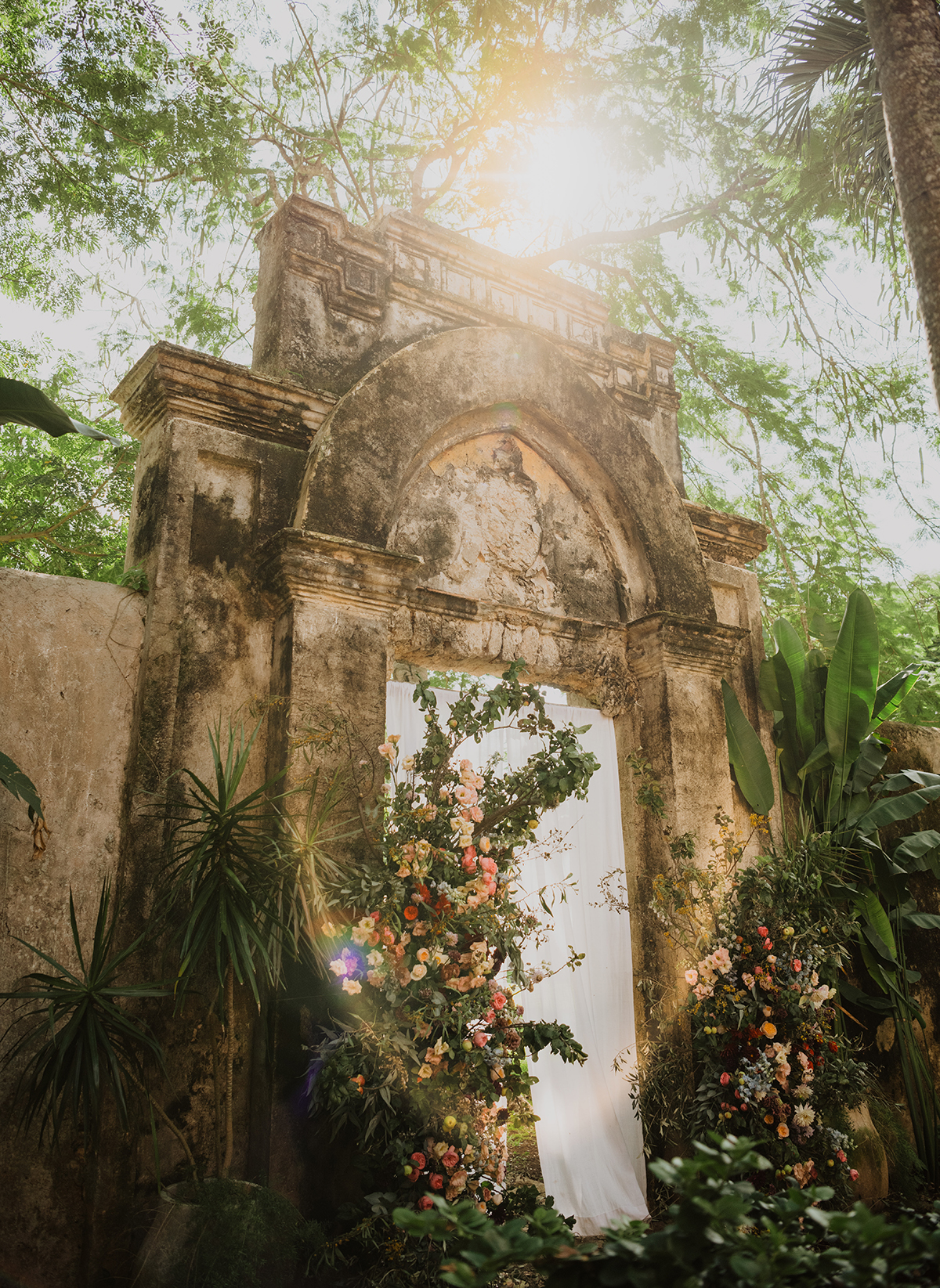 The intimate weekend celebration embraced the natural beauty, sounds, and flavors of Mexico, with local flowers in vibrant jewel tones, live mariachi music, and an after-party featuring a taco truck. When the forecast predicted precipitation during the wedding’s outdoor ceremony, Hagler took a tip from the vegan-led makeup team and, following Mexican tradition, stuck knives in the ground to protect the matrimonial moment.

Hagler’s rain ritual worked, and the wet weather held off until the cocktail hour, when guests were safely shielded from the sudden storm beneath a canopy. Minutes later, the skies cleared and the party continued into the night, with a creatively crafted vegan dinner and dancing.

The newlyweds followed their Mérida marriage with a trip to Playa Del Carmen before spending a week in Mexico City. There they indulged in the capital’s fantastic vegan culinary offerings, visiting restaurants including Por Siempre Vegana Taqueria, Plantasia, and Fat Vegan. “The vegan food there is insane,” says Hagler. “It is some of the best vegan food I’ve ever had in my entire life.”

All of the wedding’s decorations reflected the natural beauty of Mexico and Hagler’s passion for color. Floral arrangements were composed of local blooms in stunning jewel tones. The music Weseloh walked down the aisle to the sweet sounds of “Always” by Frank Sinatra, while the bride entered to an instrumental rendition of “Stand by Me” by Vesislava. 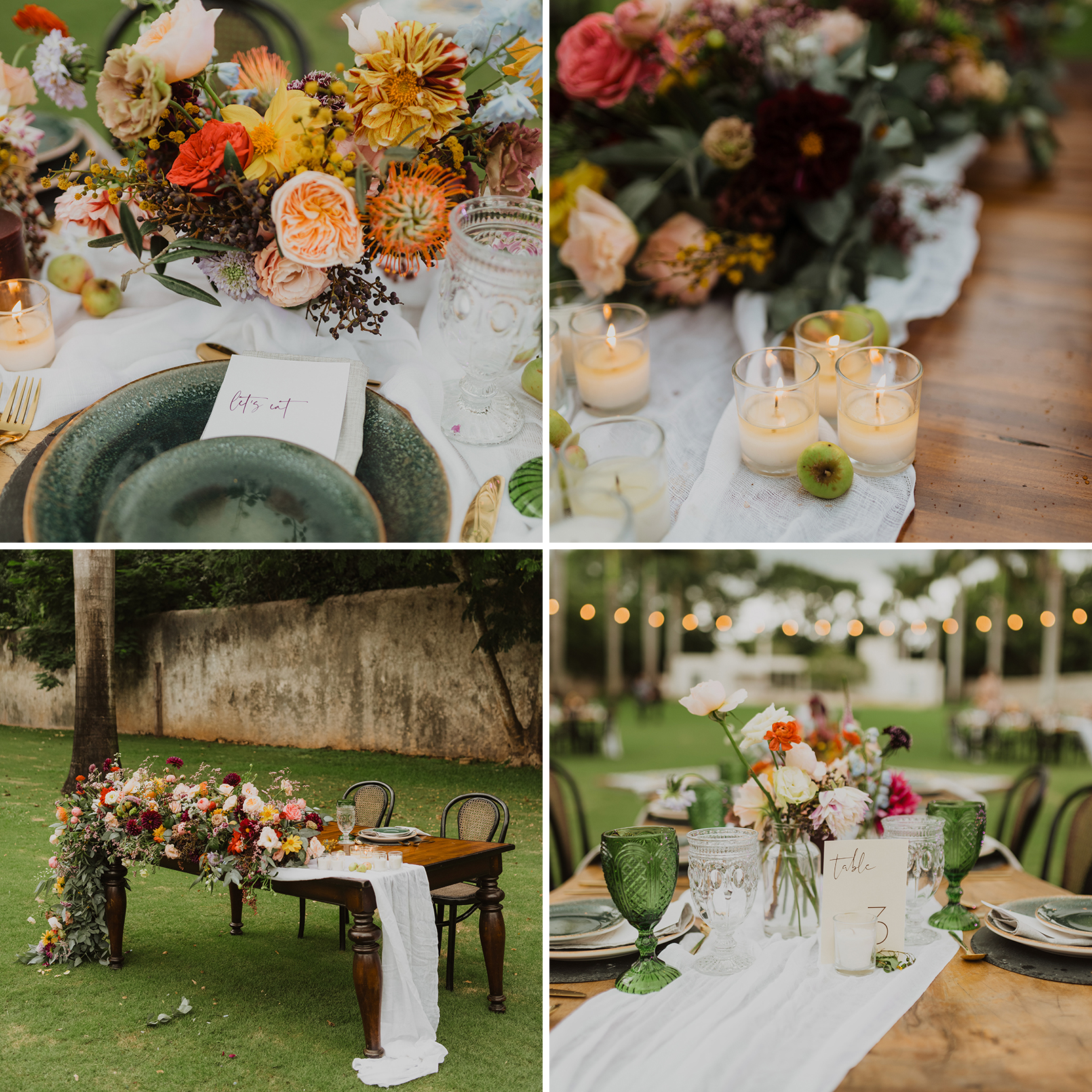 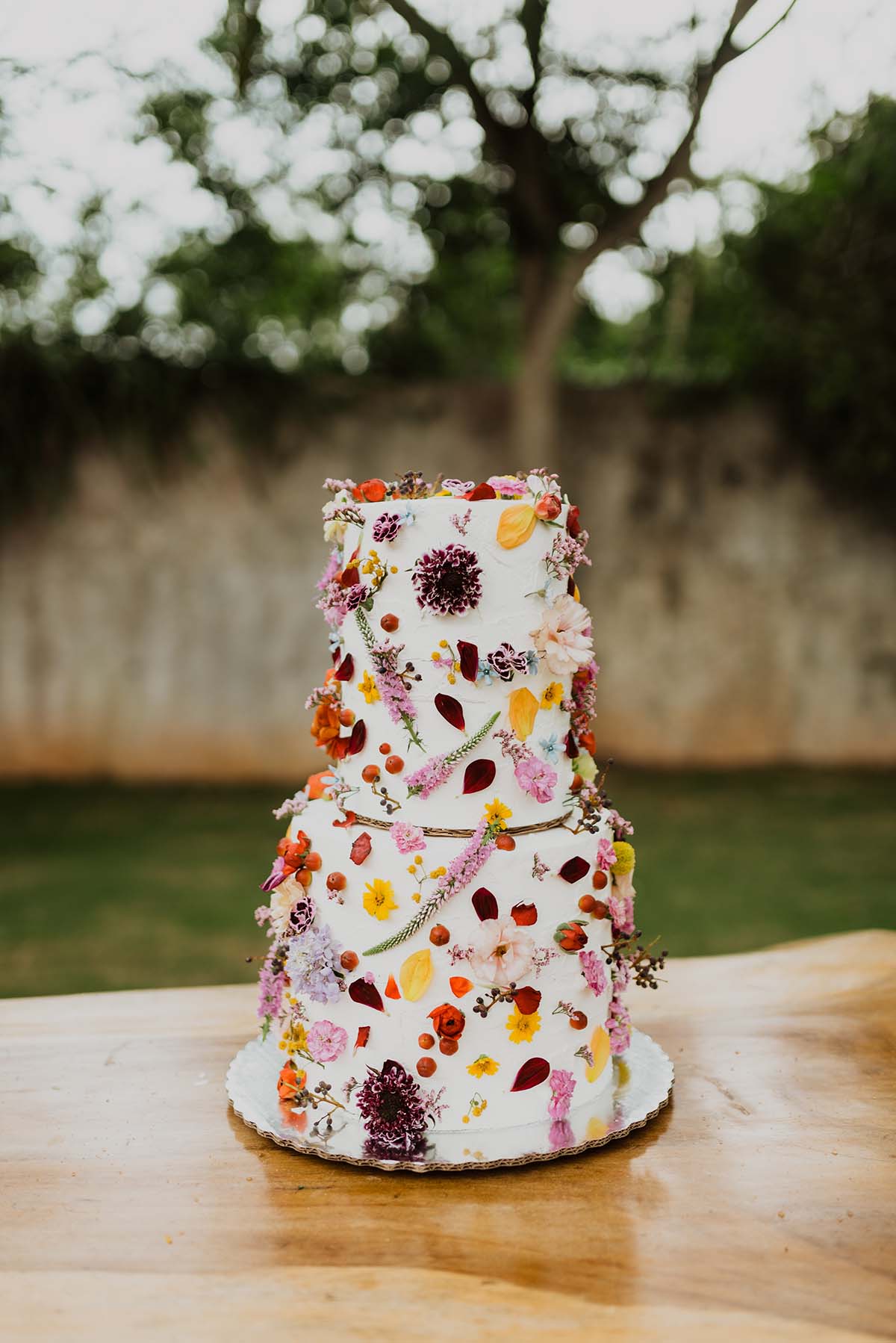 For the ceremony, Hagler wore an airy, sleeveless silkfree gown by Tara Lauren, with custom-designed heels from celebrated vegan designer MINK shoes, while Weseloh dressed in a vegan suit by Hangrr. For the reception, the bride emerged in a flirty dress and striking off-the-shoulder cape by Karen Willis Holmes, with vegan gold platform shoes by AERA. 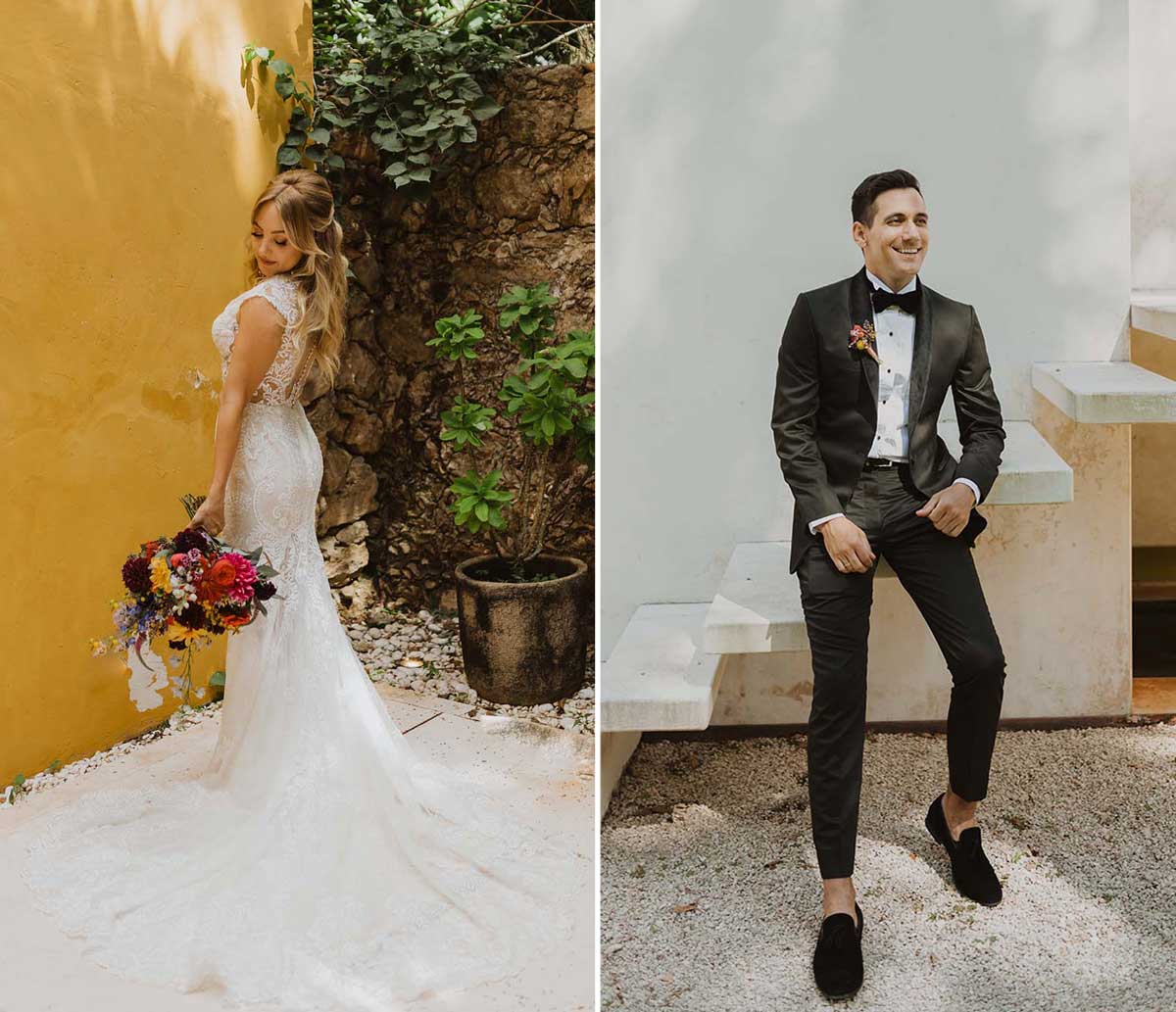 Though the couple’s two beloved canine companions—Zoey and Archie—stayed at home, Hagler and Weseloh brought them to the wedding in spirit by naming their signature drinks after them. 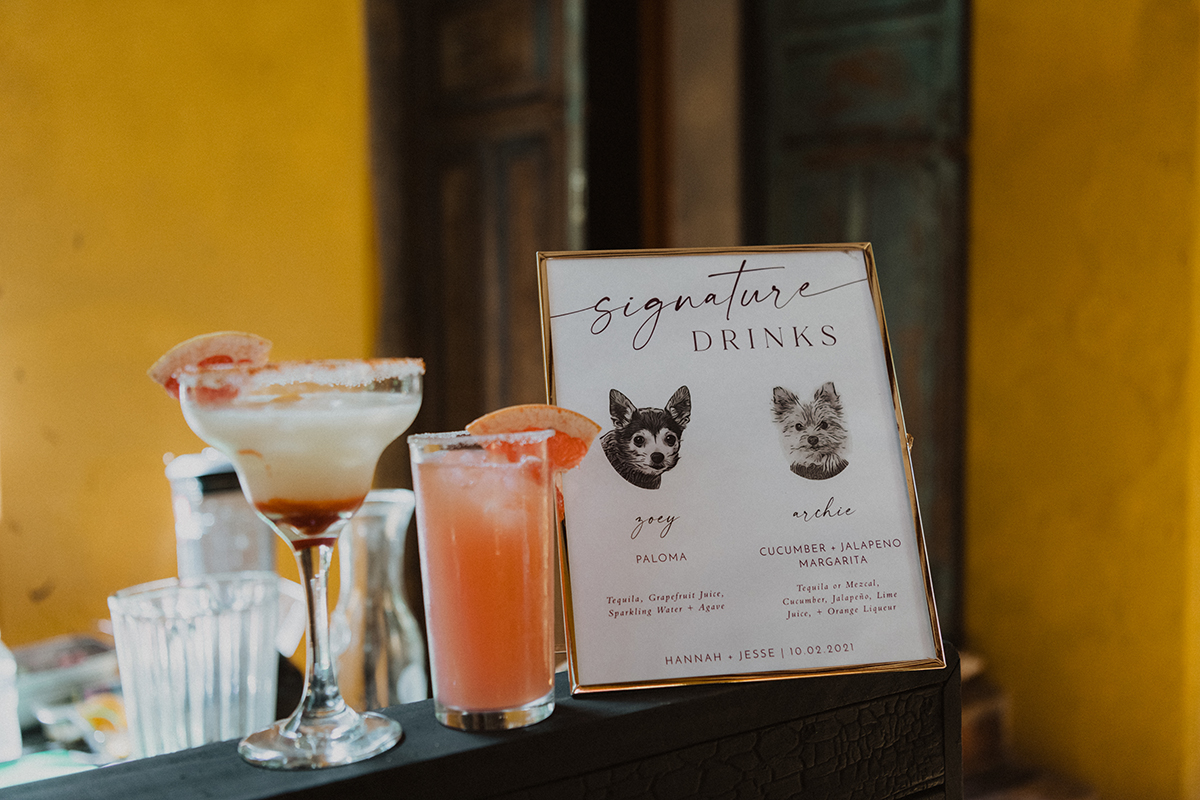 For more vegan weddings, read:
A Vegan Indian Wedding in the British Countryside
An Eco-Friendly Wedding at a Miami Sanctuary
A Whimsical Forest Wedding in Canada