Delicious, medicinal, psychedelic, or sometimes deadly, mushrooms are equal parts fascinating and mysterious. Mushrooms and their mycelium still elude us, but we’ve become regular mycophiles in all aspects. The days of only finding white button, cremini, and portabello mushrooms at the grocery store are over. It’s not unusual to find fresh shiitakes or oyster mushrooms among them and the farmers’ market brings even more varieties.

Should you wash mushrooms?

If you’ve ever read a recipe that uses mushrooms, you might have come across advice that you should never wash them because they absorb water. Instead, many cookbooks advise you to clean them with a damp cloth. But, the cooking magazine Cooks Illustrated advises washing them with water. While there is some absorption, the amount is negligible.

How to use different types of mushrooms

There are just over 2,000 species of edible mushroom species. This guide doesn’t cover all of them, but we selected some of the most common types that you’ll find in the grocery store or farmers’ market. 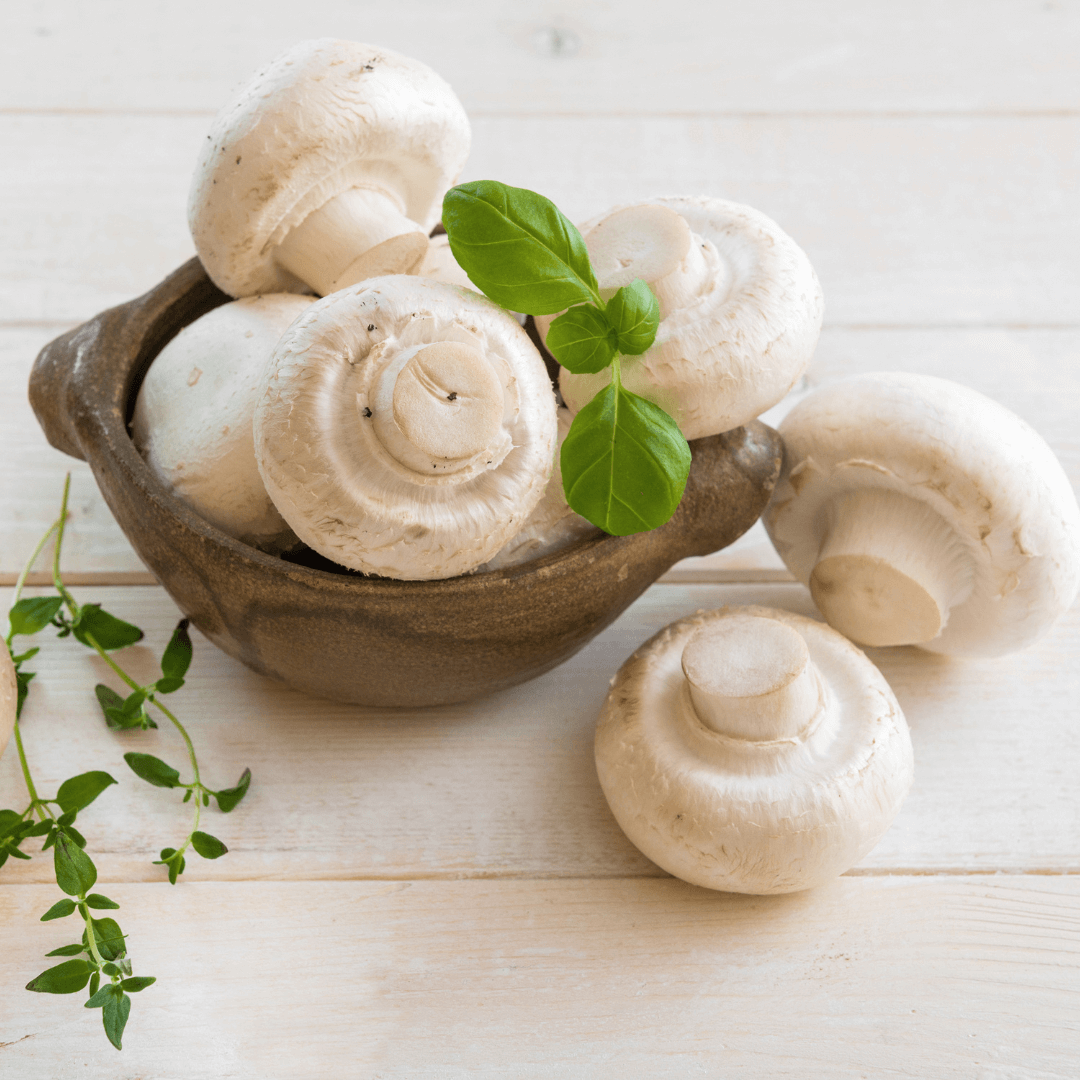 If you’re familiar with only one kind of mushroom, it’s probably white button, or Agaricus bisporus. White button mushrooms are a type of gilled mushroom and they are actually the same as creminis and portabellas—which we’ll get to below—but they are harvested at an earlier stage during their growth cycle.

White button mushrooms are practically flavorless in their raw state, but they shine when they’re used as an addition to a dish. Slice them up for a hearty vegan stew or dice them up and add them to a plant-based bolognese for a meaty texture. They are also a good addition to tofu scrambles. If you want to enjoy white button mushrooms in a purer form, slice them, then sauté them in oil or dairy-free butter with minced garlic and fresh, chopped parsley. 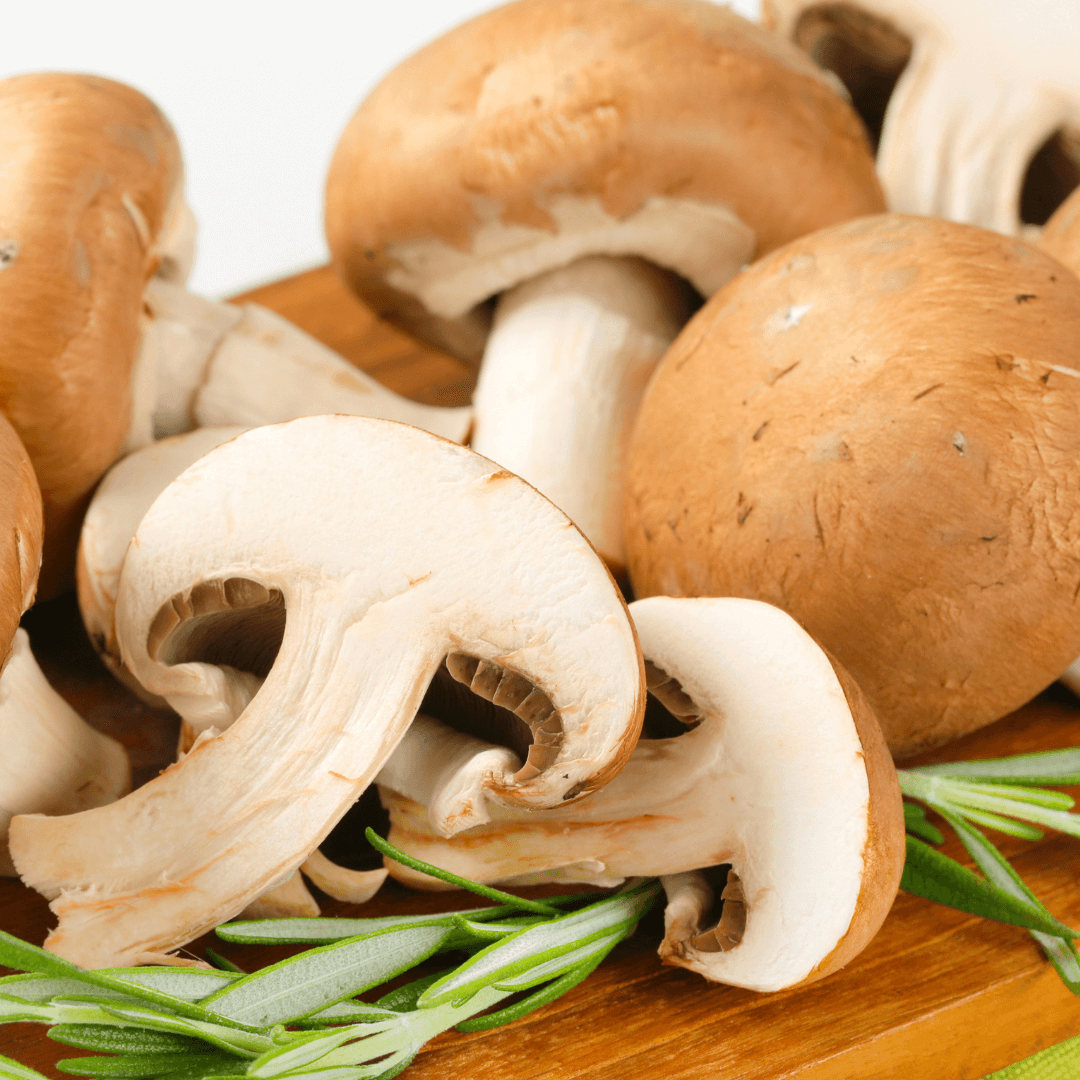 Also known as baby bella mushrooms, cremini mushrooms are Agaricus bisporus harvested later in their growth cycle. Due to this, they have a deeper, more savory flavor than white button mushrooms and are better suited to eating raw in salads. But, if you’re an umami fiend, then cook them the same way that you would cook white button mushrooms. They can also be stuffed with a variety of fillings, such as vegan crab and dairy-free cream cheese. 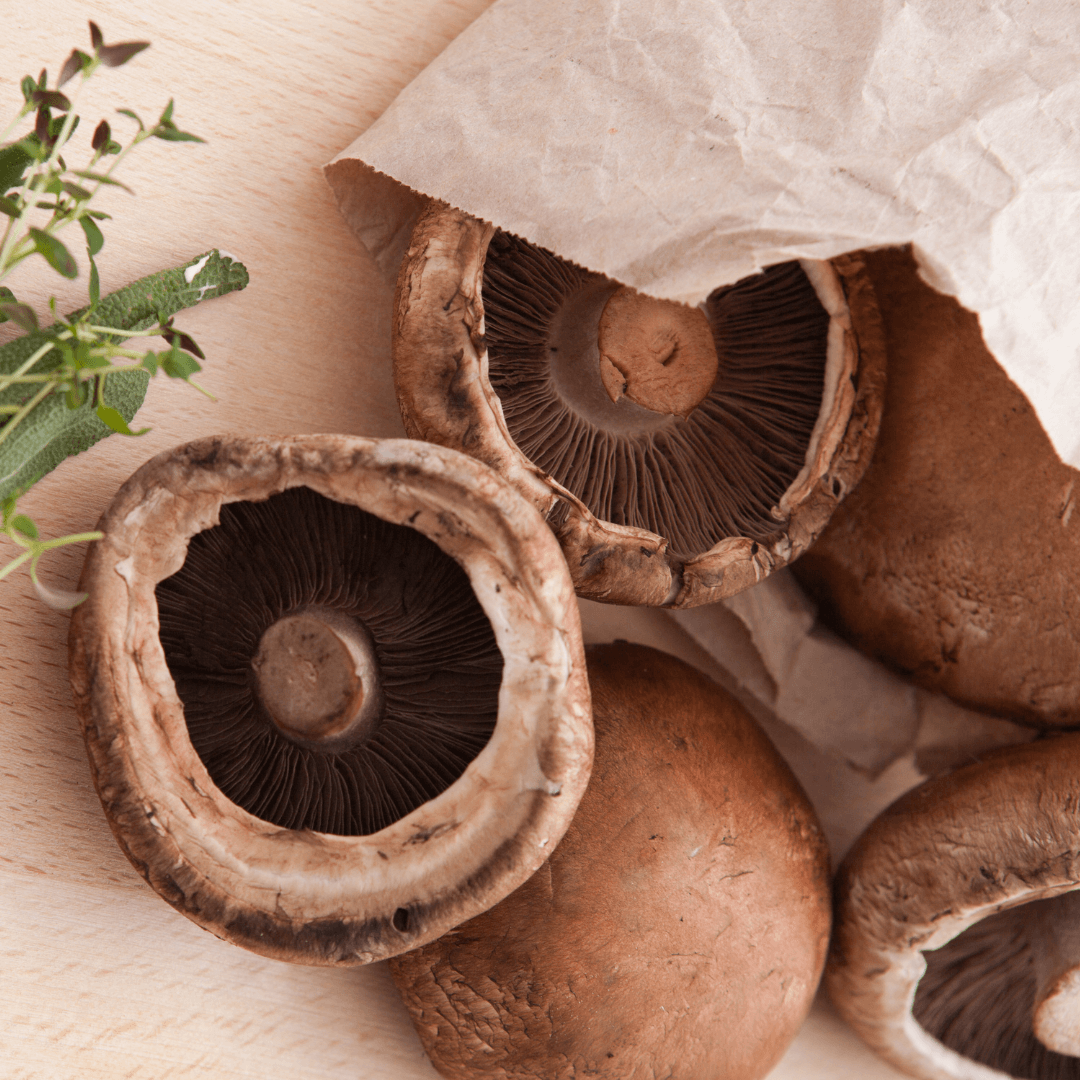 Noticeably bigger than the younger Agaricus bisporus, portabello mushrooms have a heartiness to their flavor that might make ’shroom-haters shirk. It’s common to remove their stems and just cook the caps, either marinated or plain. They are versatile, so if a recipe calls for white buttons or creminis, you can use portabellos.

Portabellos are great stuffed, like in these spinach and mashed potato-stuffed mushrooms. But, they are also a classic veggie burger ingredient—either using the whole cap or dicing and mixing it with other ingredients such as legumes and grains to form a patty. 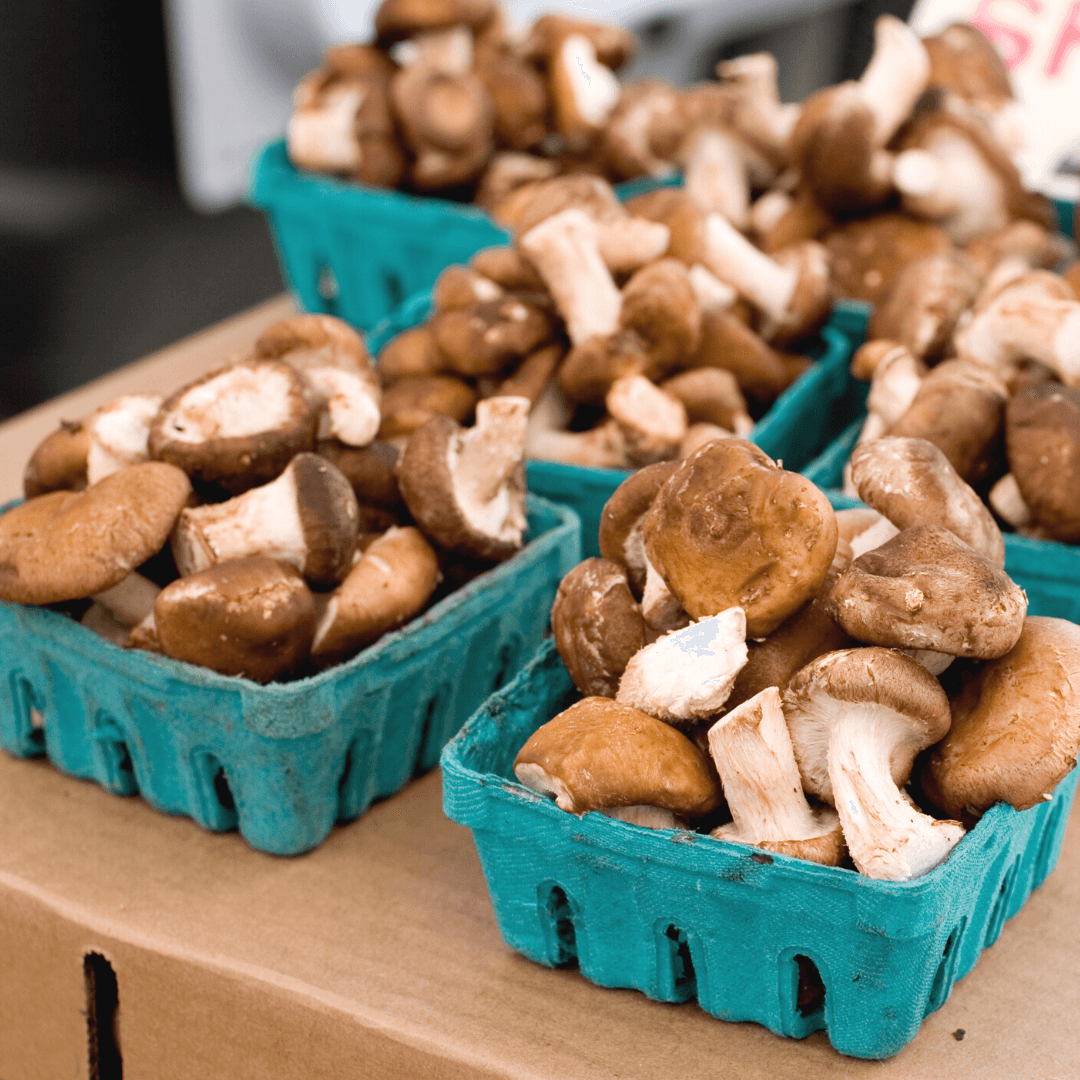 Shiitake mushrooms—Lentinula edodes—are small brown mushrooms native to East Asia that are traditionally cultivated on logs. Now available worldwide, modern shiitake mushrooms are usually grown in controlled conditions, either on logs or in an artificial substrate.

These mushrooms, which are available fresh or dried, have a deep umami flavor and can be used in a wide variety of dishes, from hot pots and stir-frys to pasta sauces and vegan BLT sandwiches. Their woody stems are typically removed before they are cooked. If you’re using dried shiitake mushrooms, save the cooking liquid as a soup stock—you can do the same with the raw stems. Always ensure that shiitake mushrooms are cooked thoroughly. They’re known to cause a rash when eaten raw or undercooked. 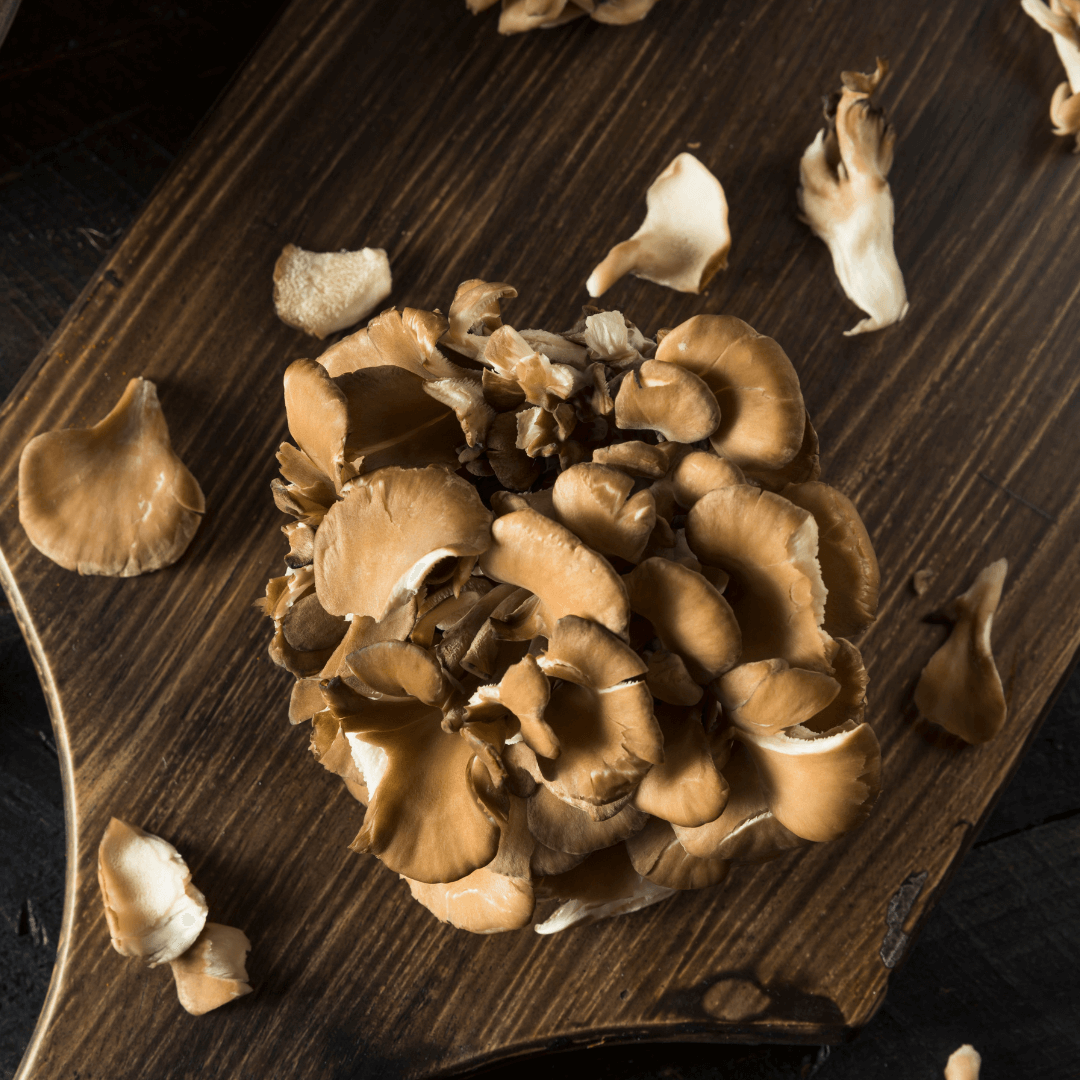 Also known as hen of the woods or Grifola frondosa, maitake mushrooms—which is Japanese for “dancing mushrooms”—have a golden brown color and grow in delicate, ruffled conks. They are polypore mushrooms, meaning they inhabit live or dead trees. Polypores help the wood rot and play a critical role in forest ecosystems.

Maitake are best when young, as they become tough and woody when left to age. They can be baked, battered and fried, sautéed, grilled, or cooked and used as toppings, either on pizza or on a buttery crostini for a dinner party or a night in with loved ones. 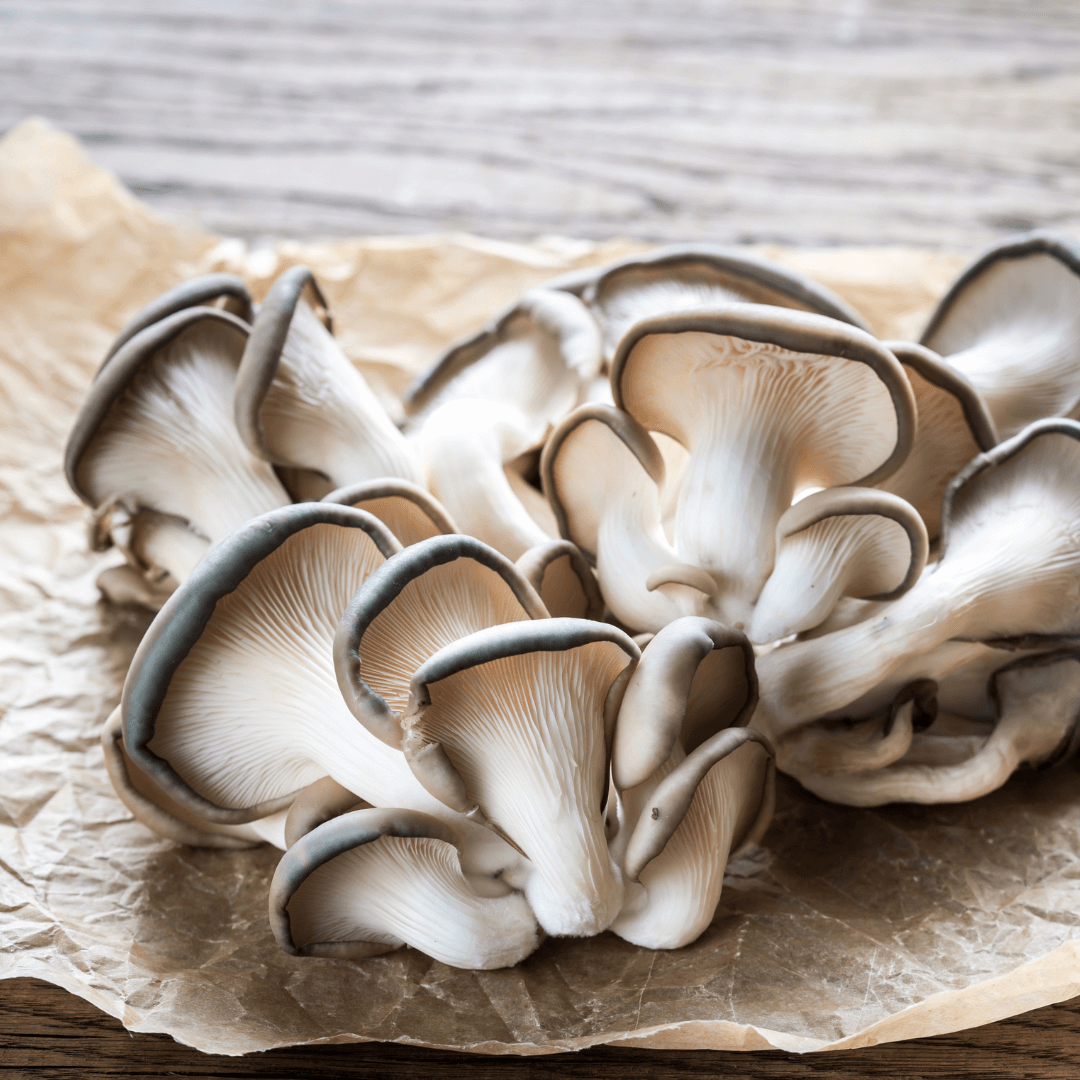 A staple of farmers’ markets, oyster mushrooms (Pleurotus ostreatus) are distinct from king oysters, which we’ll get to below. These gilled mushrooms are usually white or light tan and the shelves grow in overlapping, round clusters. In the wild, these mushrooms grow on decaying trees in temperate and subtropical forests. They can even decompose plastic! Oyster mushrooms are commonly foraged, but most of the ones you’ll find are cultivated.

Oyster mushrooms turn slimy when cooked in a lot of liquid, so they’re not suited for soup or stew, but otherwise, they can be grilled, sautéed, or fried—especially when coated with a crispy batter. They make an especially great substitute for seafood, either in a buttery linguine dish with fresh parsley or in a sandwich, like this oyster mushroom po’boy. 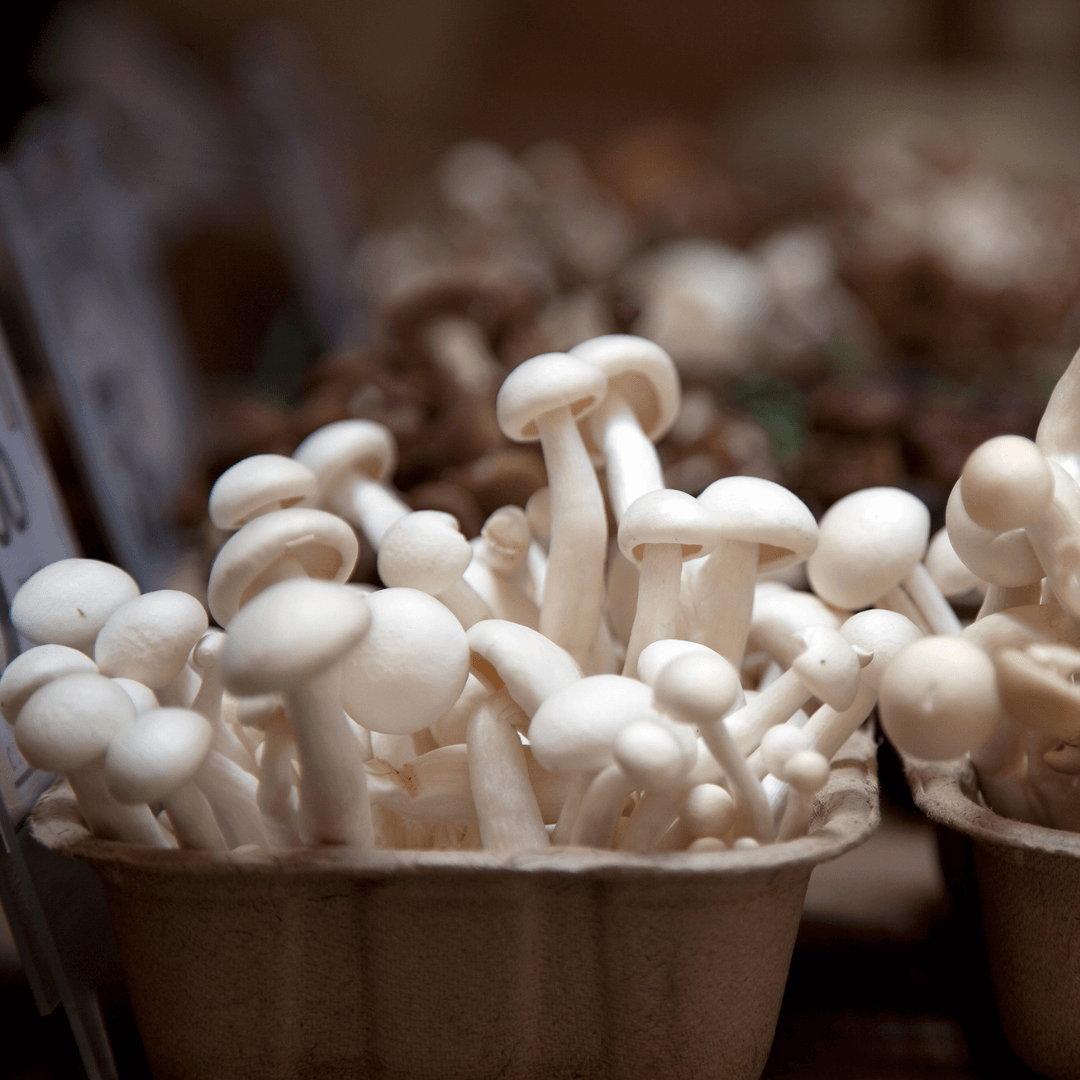 Flammulina velutipes, or enoki mushrooms, grow in clusters with long, slender white stems and a small pin-cushion tip. Their flavor is mild and not particularly noteworthy, but they have a pleasantly chewy texture that makes them suited to sauteing, grilling, braising, and adding to hot pots, noodle soups, and sundubu jjigae (Korean soft spicy soft tofu stew). They are also fantastic in warm, mixed mushroom salads. 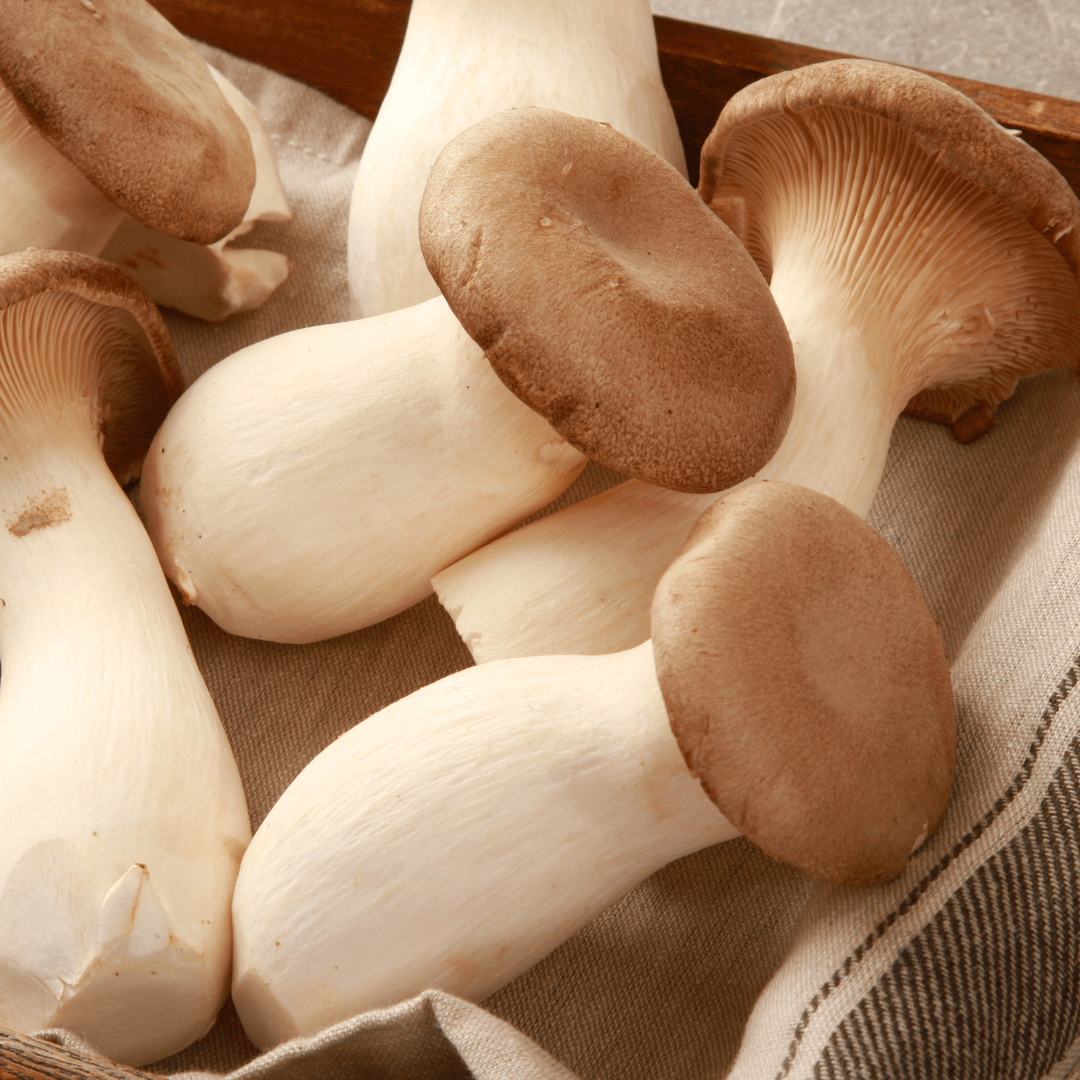 Wildly different-looking from oyster mushrooms, king oyster mushrooms—also known as king trumpet, French horn mushrooms, or Pleurotus eryngii—have thin brown caps and thick white stalks that give them a tree-like silhouette. They have a meaty, chewy texture that makes them the go-to ’shroom when replacing meat or seafood. The mushrooms can be cut vertically into thin slices to make vegan bacon or the stalks can be cut into coins to make a substitute for scallops. But, king oysters can also take sautéing, frying, braising, grilling, as well as being cooked in soups, stews, and sauces. 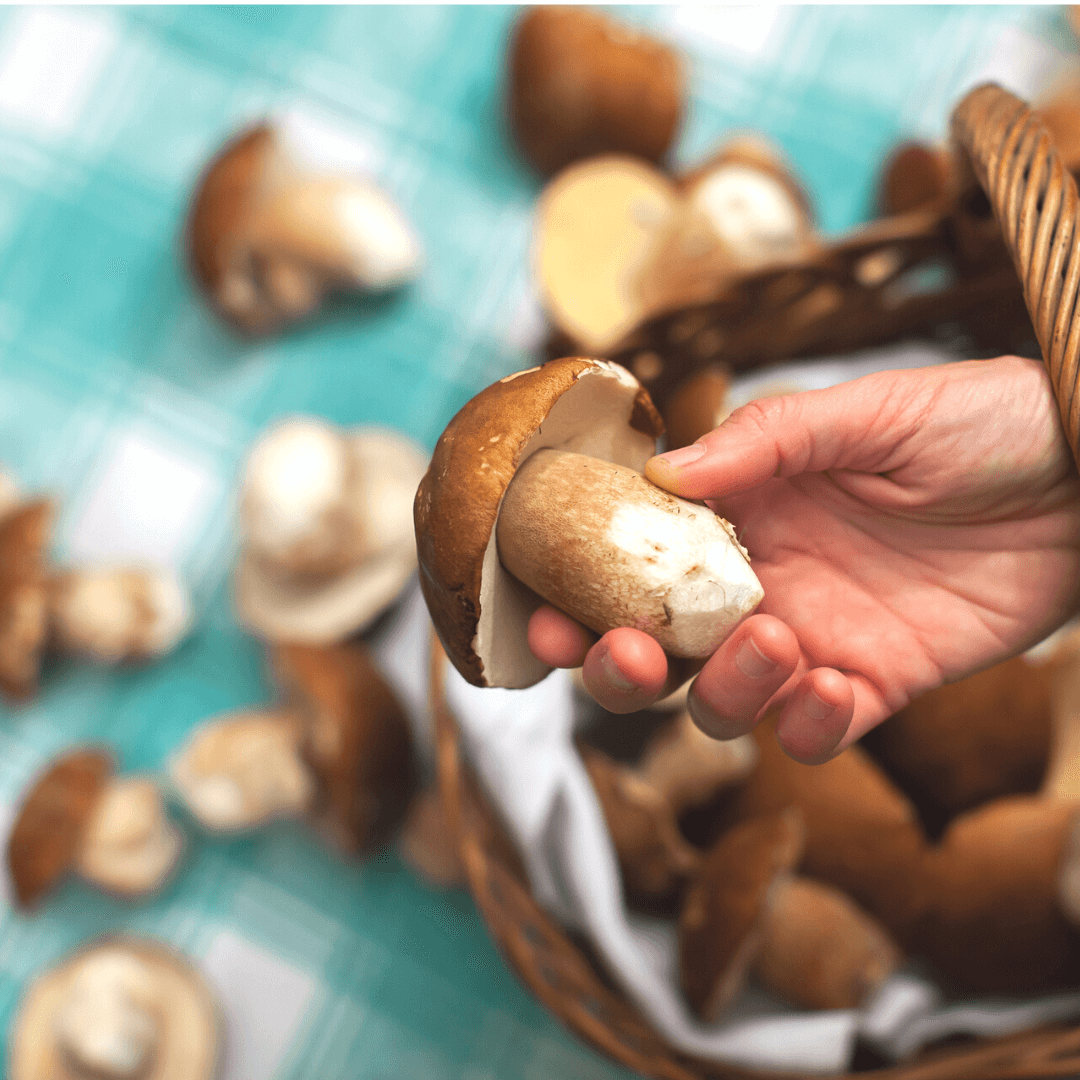 Porcini—Italian for “piglet”—mushrooms have round brown caps and thick white stalks that grow at the base of trees. The earthy, nutty Boletus edulis is prized in Italian and French cuisine, so they are especially good in both cuisines, be it pasta, risottos, hearty soups like minestrone, and mushroom gravies. They are usually available in fresh or dried varieties. As with shiitakes, dried porcini mushrooms are typically used to elevate the flavor of stews. 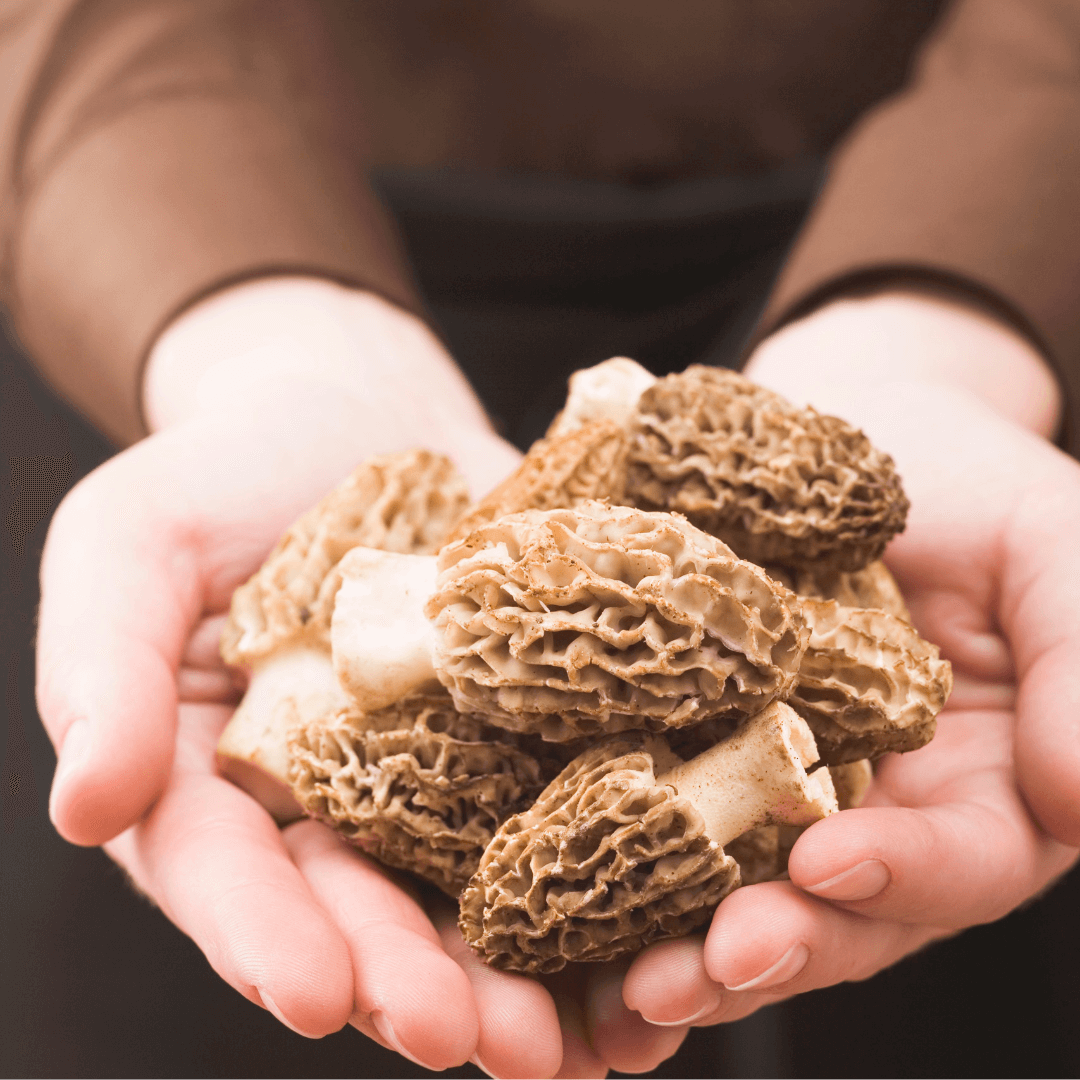 One of the holy grails of mushroom foraging, the morel mushroom, or Morchella, is light tan in color with a conical, honeycomb-like cap. It is actually more closely related to truffles than they are to mushrooms. This charismatic fungi sprouts from moist soil in forests between the months of March and May. This short harvesting period means that they can be fairly expensive at $20 per pound when they’re in season.

These luxury mushrooms have a savory flavor when cooked and they add depth to any dish. They’re suited to most forms of cooking but because they’re so pricey and distinctive, you might want to use them in a way that showcases the whole fungus. 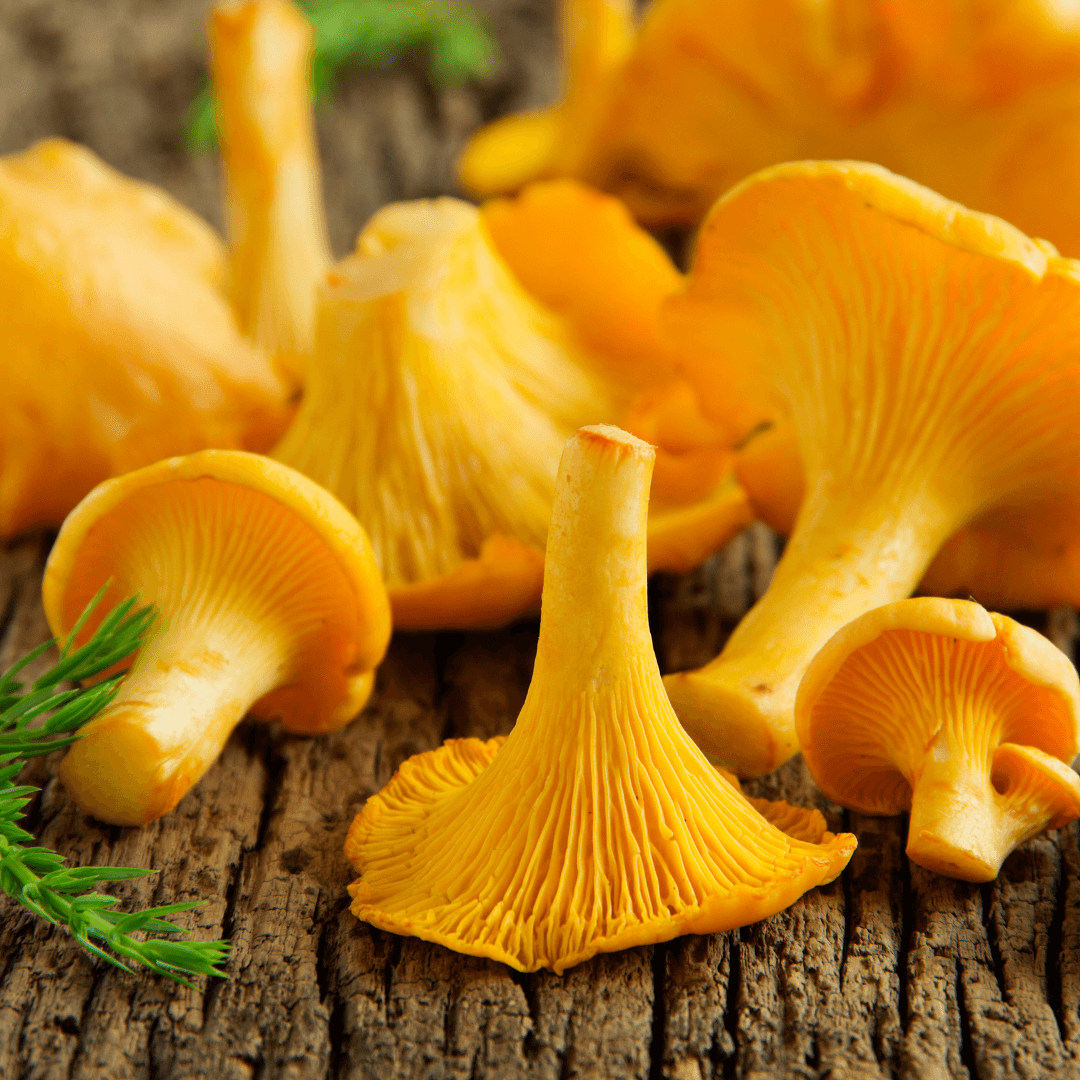 The lovely chanterelle, genus Cantharellus, is the golden child of the mushroom-foraging world. These funnel-shaped woodland mushrooms are commonly found near hardwood trees, with which they share a strong mycorrhizal (symbiotic) relationship. They’re also really delicious. Chanterelles emit a fruity aroma and have a peppery bite to them with notes of apricot, some say.

Chanterelles are best in simple dishes where their flavor won’t be outshined. Try cooking them with gnocchi in a dairy-free garlic butter sauce with salt, pepper, fresh parsley, or thyme, and a squeeze of lemon. When you cook them, the mushrooms become tender, but maintain some firmness. 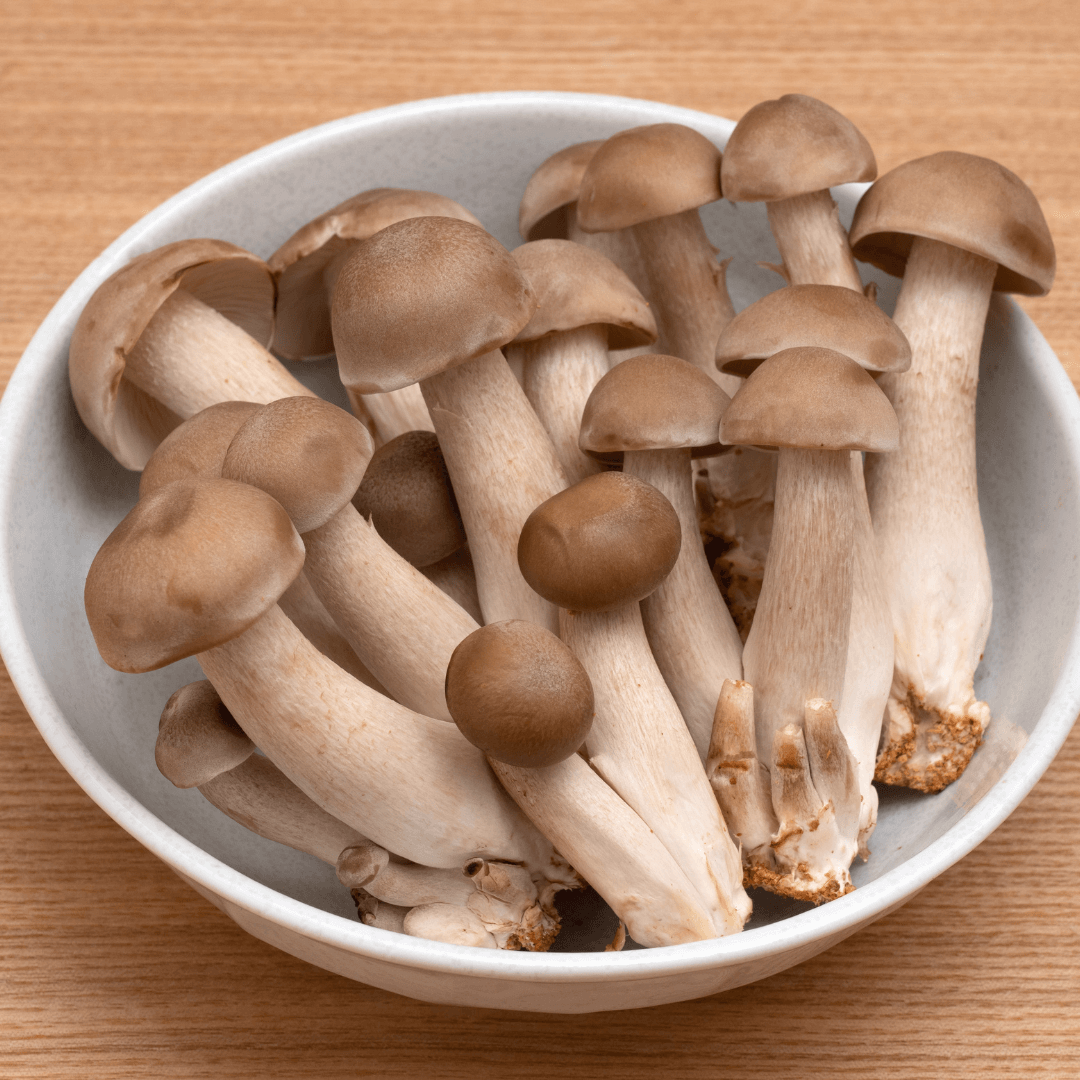 Also known as Hypsizygus tessellatus, or beech mushrooms due to how they grow from dead or dying beech trees, shimeji mushrooms are native to East Asia. These edible fungi have long, thin stems and small caps. They come in white or brown varieties. As with the mushrooms from the Agaricus bisporus family, the latter has a more obvious flavor.

These mushrooms have a somewhat crunchy texture with a mild, nutty flavor when cooked. They are good in hot pots, rice bowls, soups, and stir-frys. 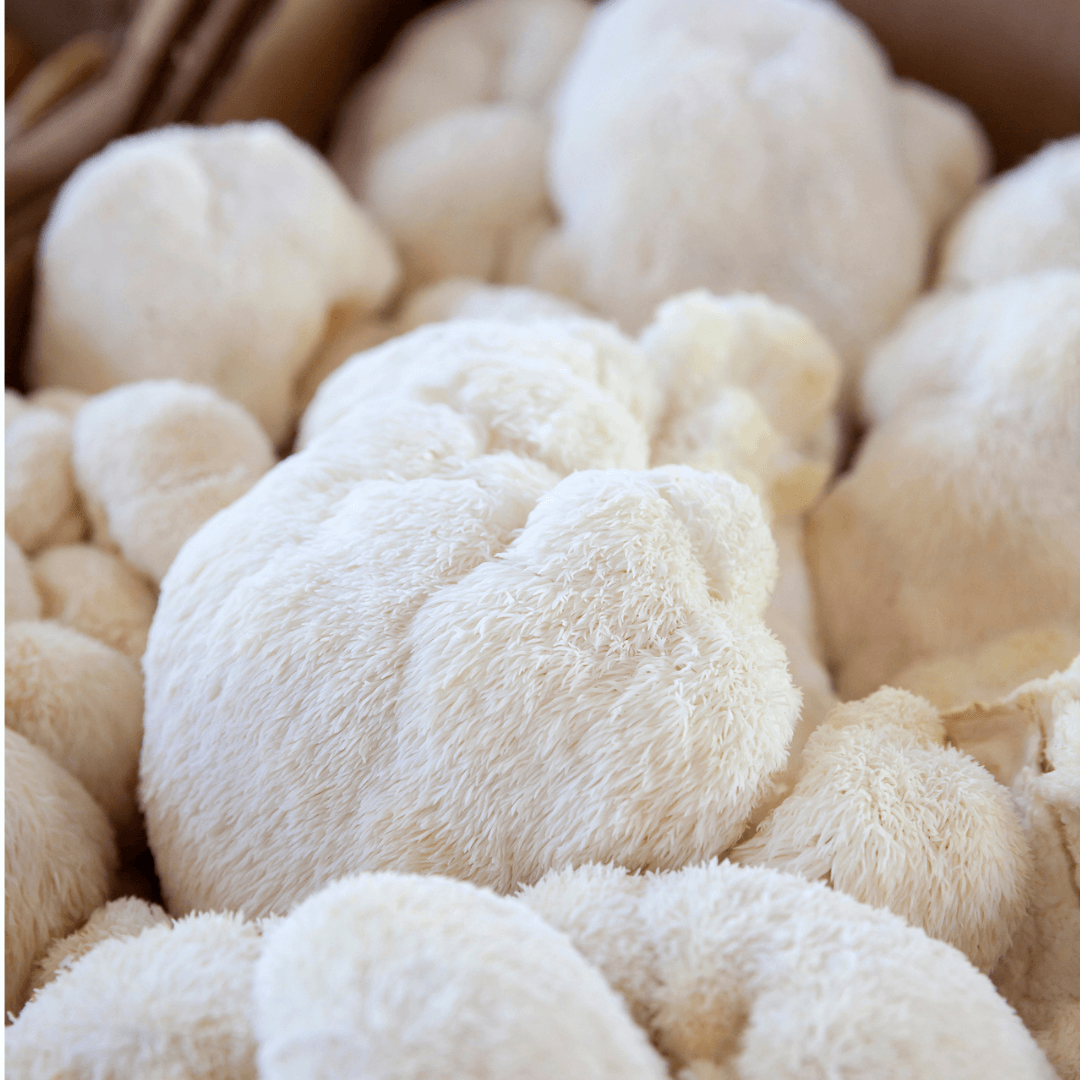 Hericium erinaceus, the lion’s mane mushroom, is a big, white mushroom made up of long, thin strands that resemble the eponymous big cat’s name. Practitioners of Chinese traditional medicine have used this tree-borne fungus for centuries. Lion’s mane mushrooms contain substances that stimulate the growth of brain cells, and studies show they may improve cognitive function and reduce symptoms of anxiety and depression.

When cooked, this mushroom is said to taste similar to crab or lobster meat. So, it’s best browned in a little bit of olive oil with salt, pepper, and minimal seasoning. 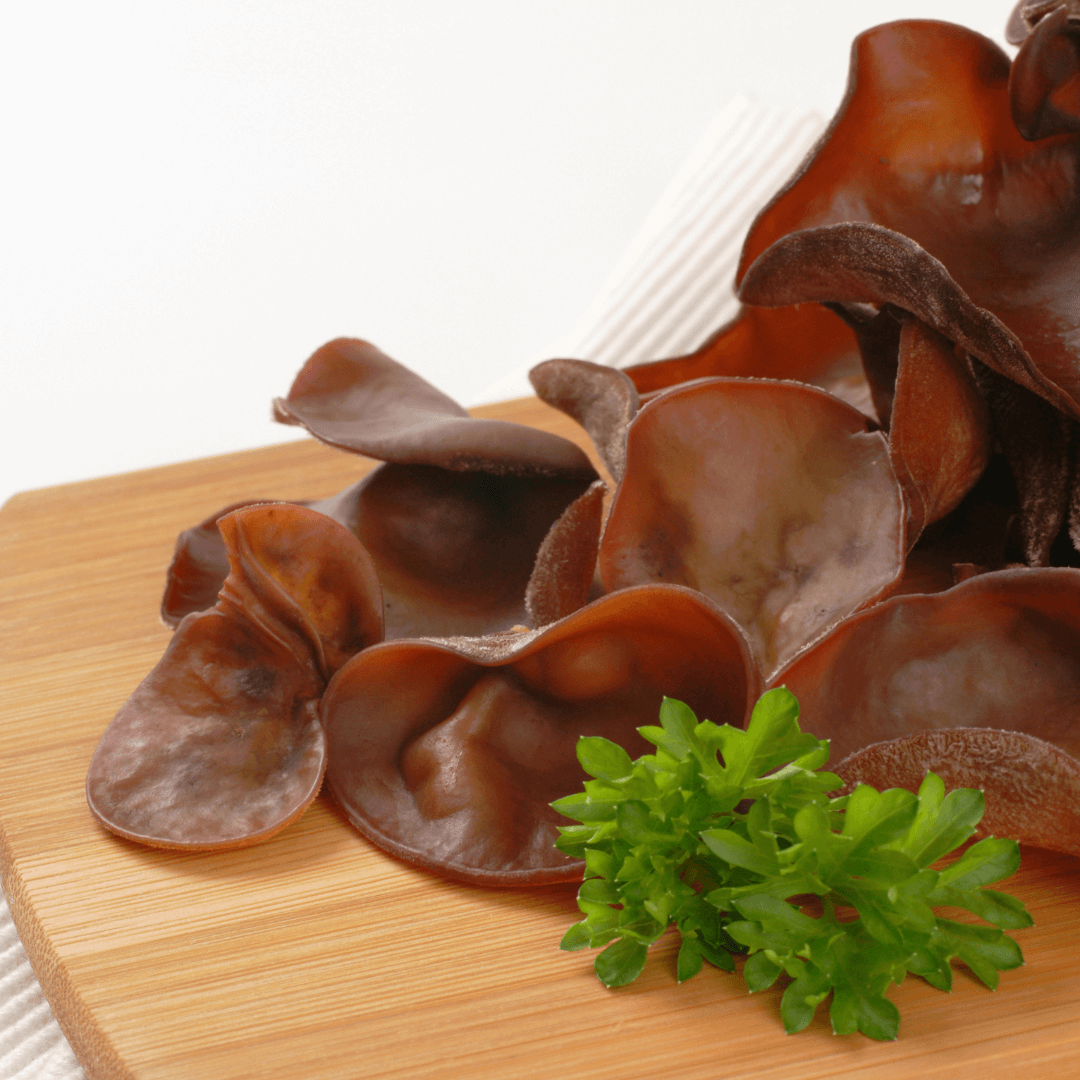 Wood ear mushrooms, also known by their scientific classification, Auricularia heimuer, are a crinkly type of fungus with a color that ranges from light to dark brown. The wild variety grows on deciduous trees, but is also cultivated for commercial purposes on sawdust logs.

Popular in Chinese cuisine, they have a gelatinous texture and mild flavor. Typically, they are sold dried and must be rehydrated before cooking. Use wood ear mushrooms in hot pots, soups, and stir-frys. 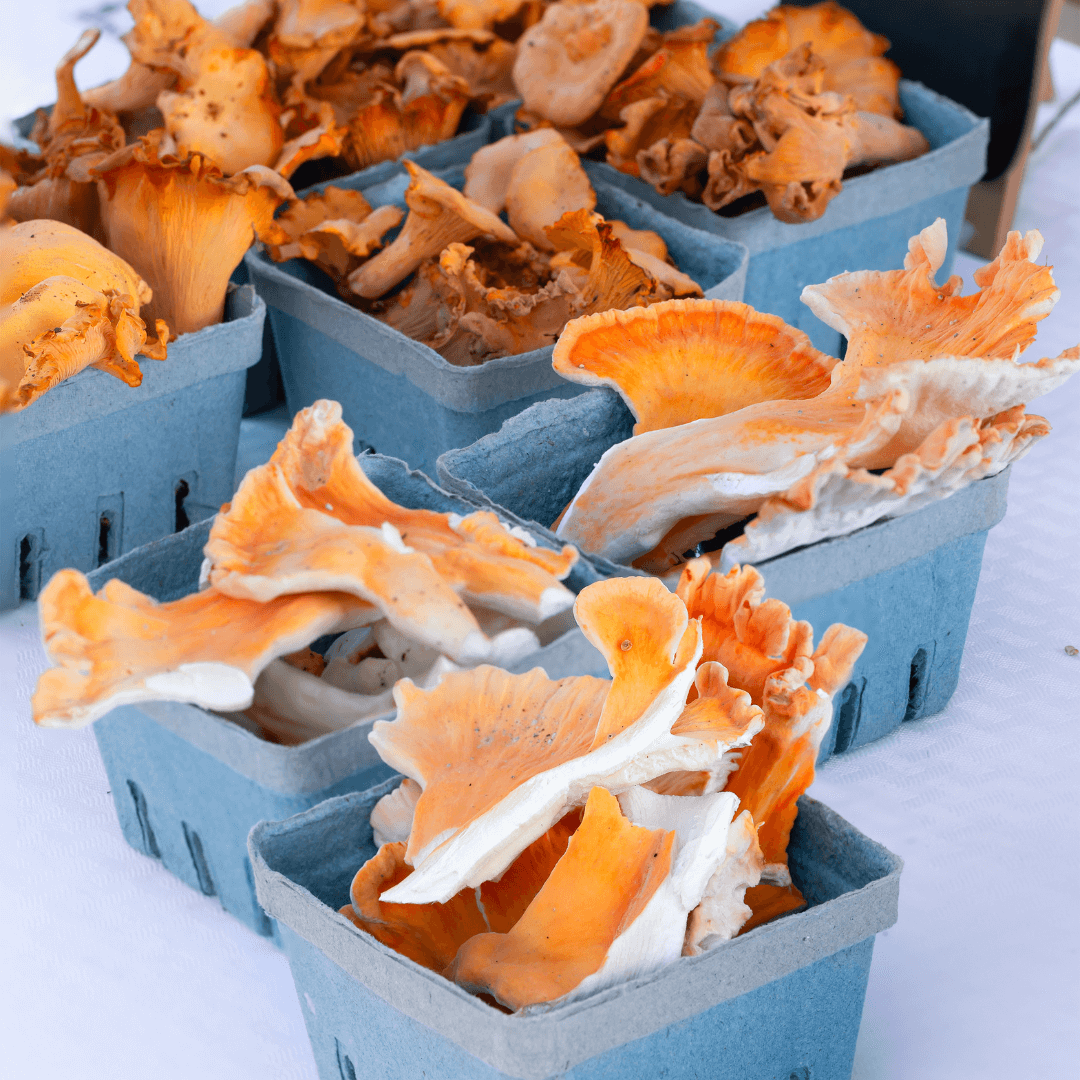 15 Chicken of the woods mushroom

The coveted chicken of the woods mushroom (Laetiporus sulphureus) is easily spotted by its overlapping goldenrod-colored shelves, ruffled edges, and large size. Foragers can find these saprotrophic (feeds on dead trees), parasitic mushrooms at the base of dead or dying hardwood trees. They grow in North America and Europe and there are seven varieties in the former.

Chicken of the woods gets its name from its flavor, which people say is reminiscent of chicken meat and lemon. In vegan cooking, you could use it to replace chicken in chicken piccata or sauté it in olive oil and add it to a pasta dish, like this angel hair pasta with dairy-free feta, kale, and lemon.

This list is just a snippet of the flavors and textures of the edible fungus world. You’re likely to find rare varieties at the farmers’ market. If you do, ask the seller how best to cook them.

For more on vegan cooking, read:

The Benefits of Mushrooms, Plus 10 Vegan Mushroom Recipes

The Health Benefits of Winter Squash (Plus, 10 Types to Try)

Vegan Sausage Rolls: The Ultimate Guide to the British Classic

A Whole Food Plant-Based Diet Is Healthy and Sustainable: Here’s How to Eat WFPB