What’s better than a generous scoop of vegan ice cream? A generous scoop of it between two cookies. Whether you prefer the classic vanilla-meets-chocolate sammie or a softer chocolate chip sandwich, these sweet handholds are summertime (or, more realistically: anytime) staples. There are more dairy-free options on the market than ever before, so take a break from the pint and stock up on some vegan ice cream sandwiches.

That depends—just like dairy-free pints come in oat, almond, coconut, cashew, soy, pea protein, and varieties made with precision fermentation, vegan ice cream sandwiches can be stuffed with any kind of ice cream. This list covers all of the options that you can find in stores, but your local scoop shop might have dairy-free frozen sammies on offer. Van Leeuwen, for one, has locations in New York, New Jersey, California, and Texas, and it can make a vegan ice cream sandwich out of any of its dairy-free flavors.

10 vegan ice cream sandwiches you can find in stores

We scoured the freezer aisles of our favorite supermarkets in search of the delectable duo of cookies and ice cream—here’s what we found: 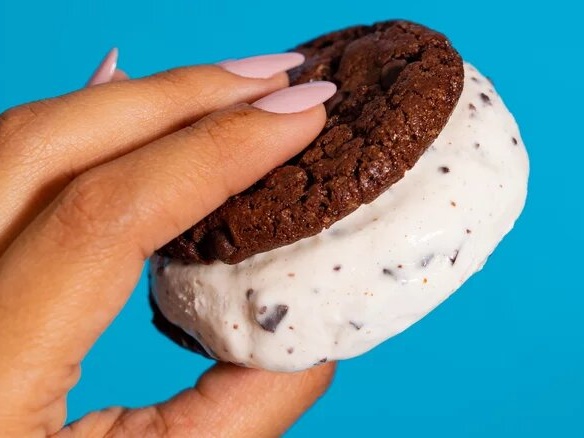 The creamy ice cream base is made with a blend of brown rice flour and pea proteins—plus flavorings such as cinnamon or vanilla paste. These taste just like you ordered a custom-made scoop shop sammie. Fun fact: Coolhaus and the precision fermentation startup Brave Robot collaborated on a vegan ice cream sandwich. What’s special about it? It’s made with animal-free whey. In late 2021, Coolhaus was acquired by The Urgent Company, the parent company of Brave Robot. According to press releases, the brand will switch over from using conventional dairy to animal-free whey.
Learn more here 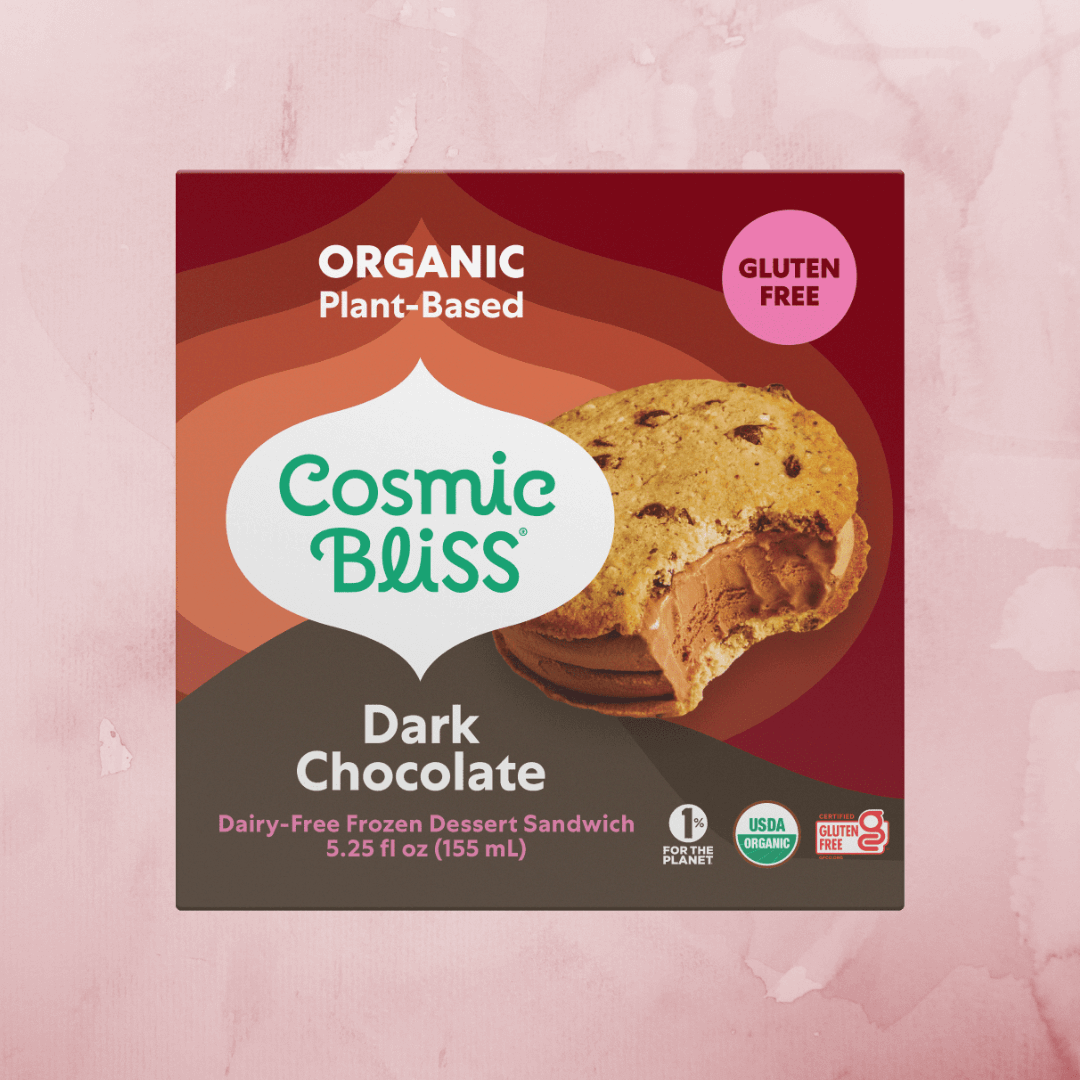 Tofutti may have been the original vegan ice cream sandwich, but Cosmic Bliss, formerly known as Coconut Bliss before it decided to start selling dairy ice cream, stepped it up a notch with its Toll House-esque chocolate chip cookie ice cream sandwiches. The soft, chocolate-studded cookie is gluten-free and hemp-based, making it ideal for anyone with food sensitivities. We’re torn between the organic Madagascan vanilla and the dark chocolate—both are equally addictive.
Learn more here 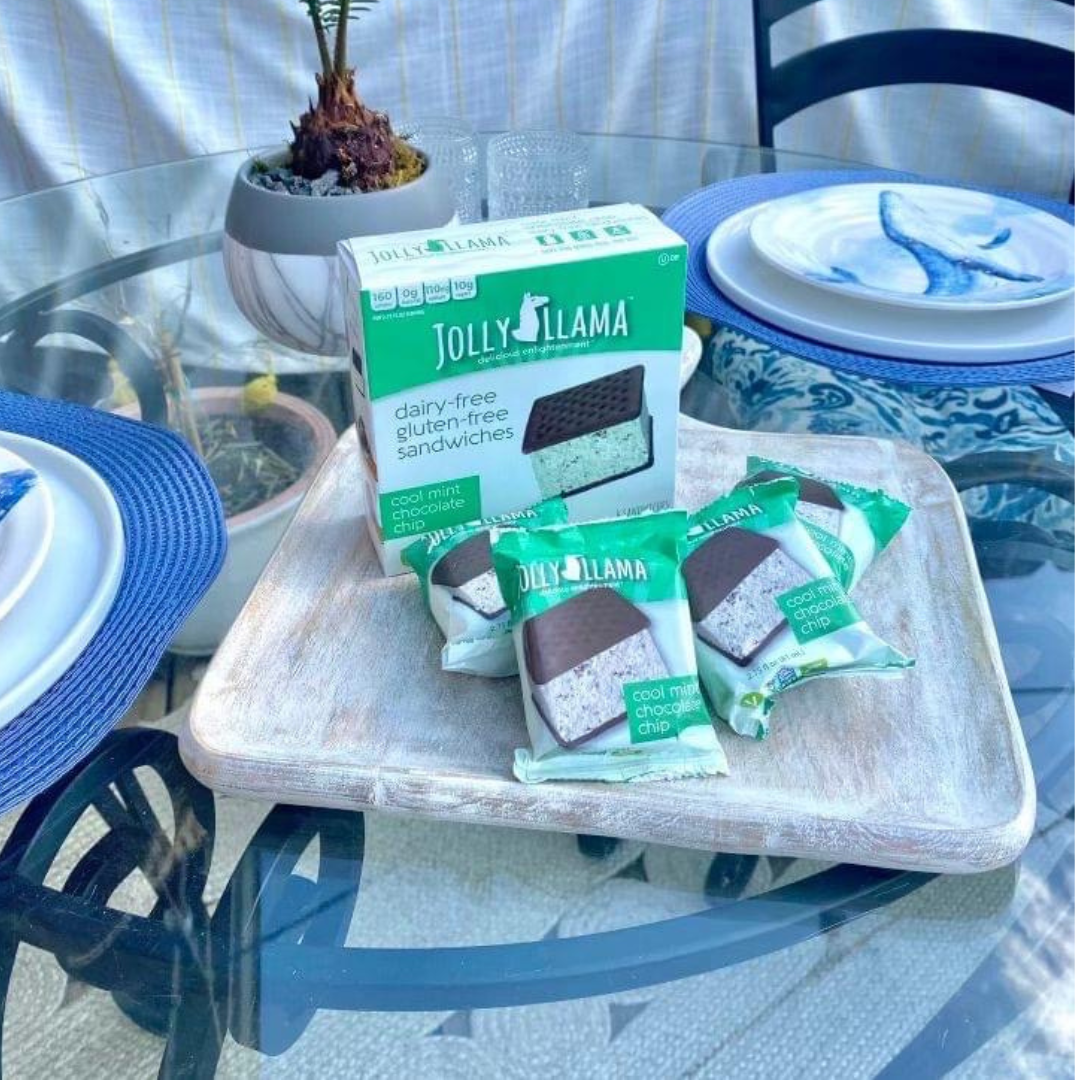 What began as a sorbet fruit pop company has expanded into more indulgent coconut cream-based novelties—and that’s a big win in our books. Offered in vanilla and mint chocolate chip, these gluten-free square sammies are so thick, we seriously considered eating them with a knife and fork. In addition to ice cream sandwiches, the Jolly Llama is also cranking out iconic dairy-free ice cream sundae cones. We’ll take a box of each in every flavor, thank you very much.
Learn more here 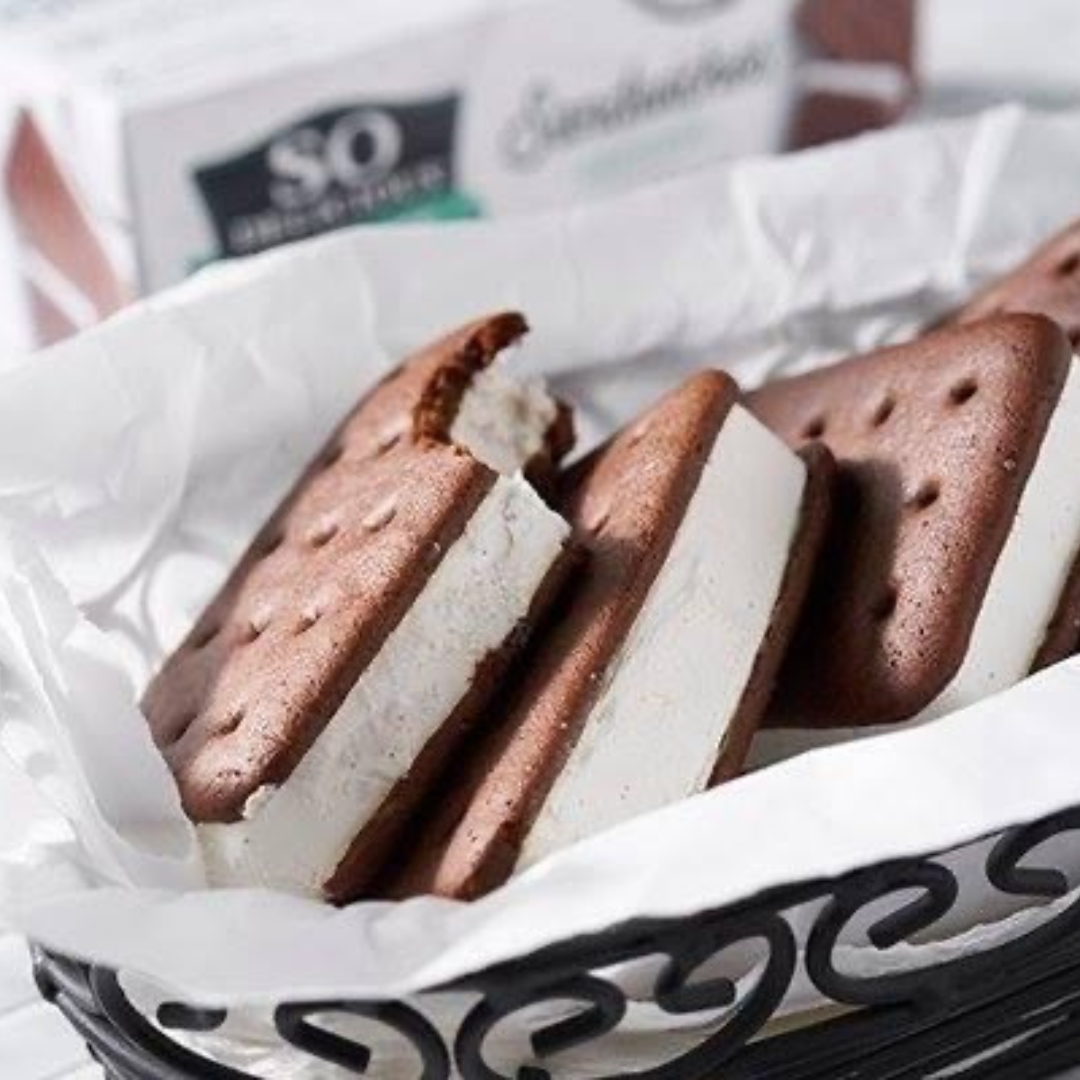 In the great debate over which plant milk makes the best ice cream, So Delicious plays on both sides. Lucky us! The non-dairy company offers both coconut milk and almond milk varieties of their classic vanilla bean and chocolate wafer sandwiches. Buy a box of each and conduct an at-home taste test to decide for yourself which milk reigns supreme.
Learn more here 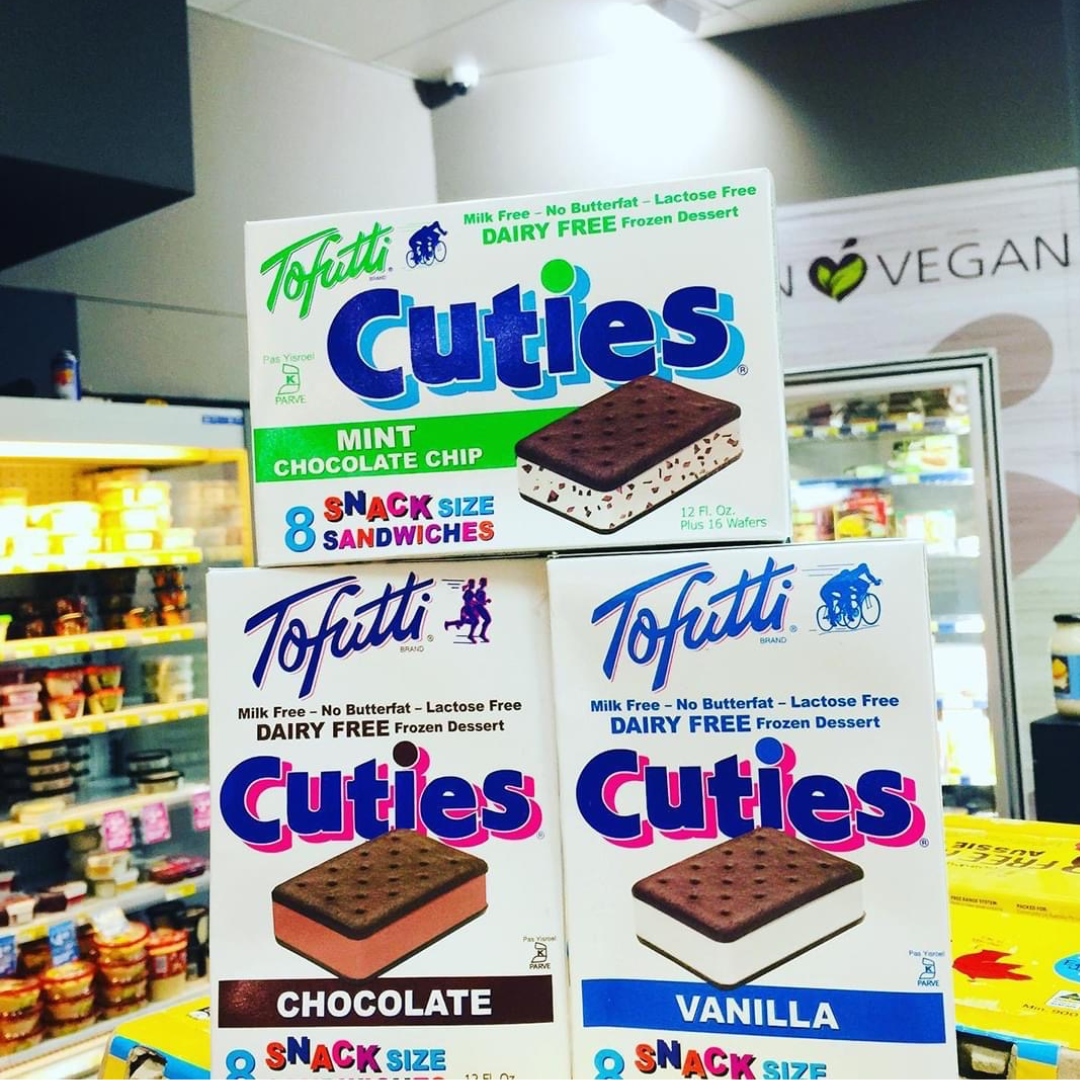 Before there was NadaMoo, non-dairy Ben & Jerry’s, or vegan options at your local scoop shop, there was Tofutti Cuties. These snack-sized sweets are the OG of non-dairy novelties. Lately, we’ve been getting creative with Cuties. Try sandwiching two together with a schmear of peanut butter or making an ice cream sammie sundae by topping two roughly chopped Cuties with vegan whip, hot fudge, caramel sauce, chopped nuts, and a cherry! And don’t forget—they come in more than just vanilla. The chocolate and mint flavors are exceptional.
Learn more here 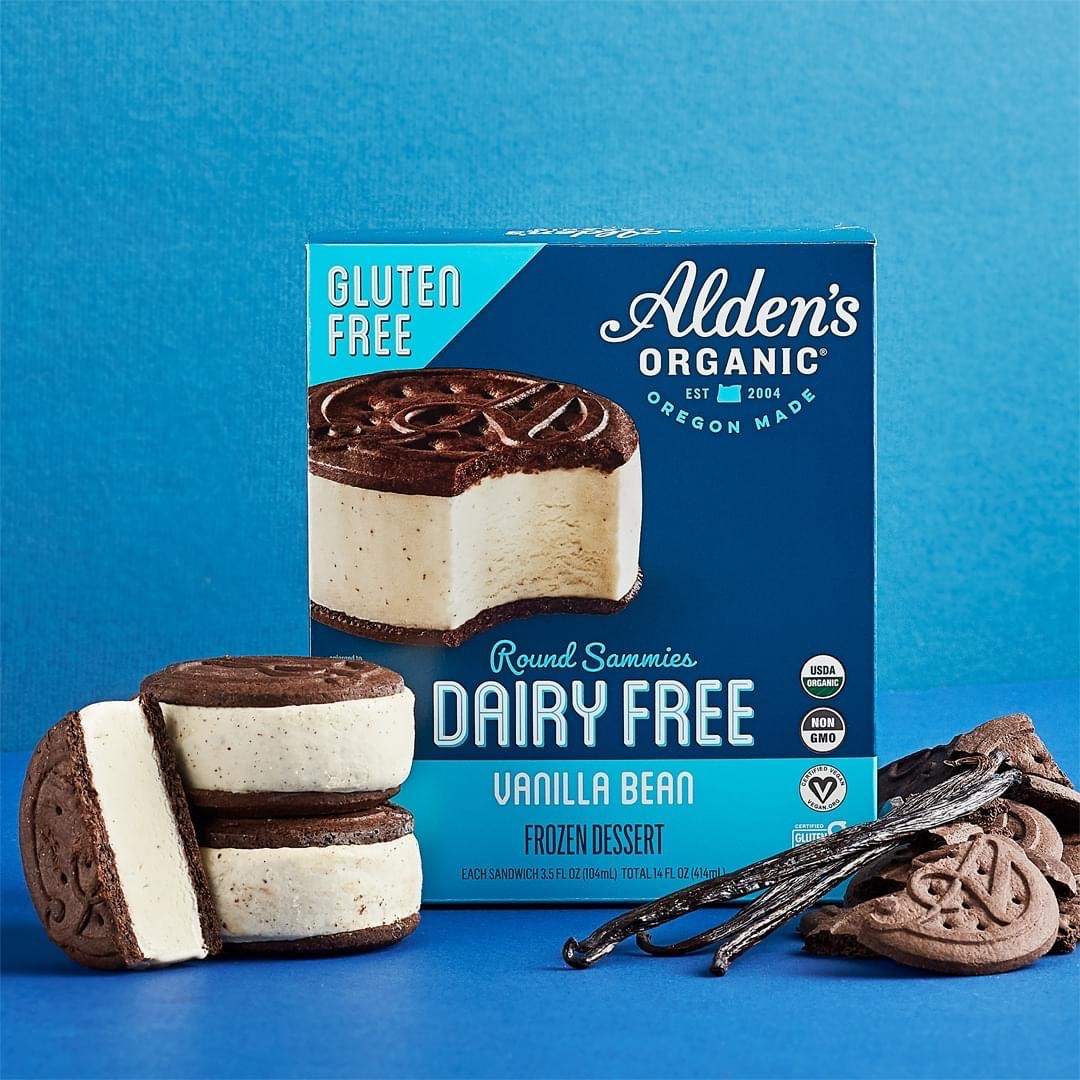 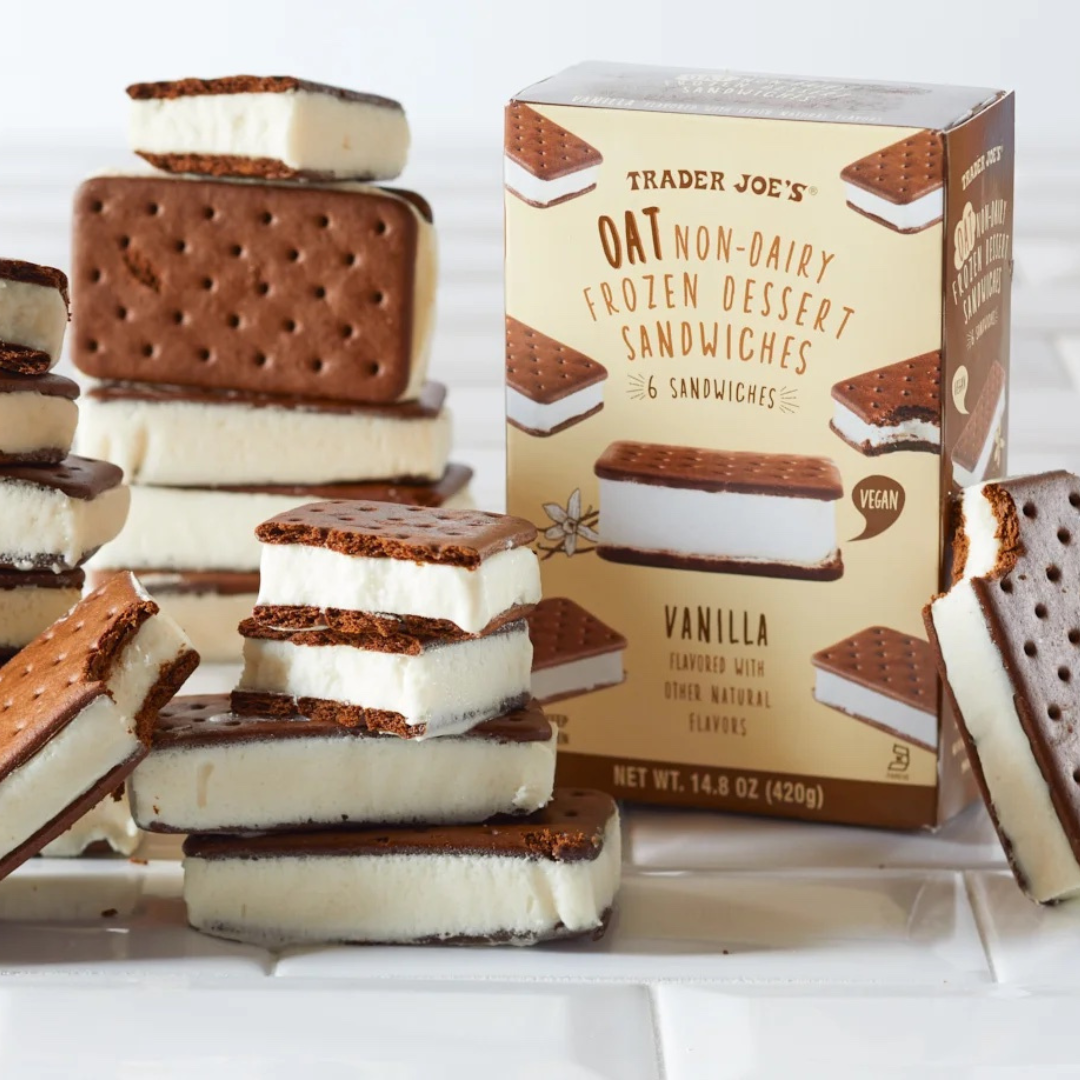 Trader Joe’s makes us excited to go grocery shopping. Not just because it means that we can load up on cheap pantry staples and fun snacks, but also because it has vegan ice cream. The chain’s “frozen dessert sandwiches” aren’t unlike a Tofutti Cutie, but they are made with oat-based ice cream instead of soy. Trader Joe’s is a little notorious for how fast it discontinues products, so we’re hoping that this one sticks around for years to come!
Learn more here 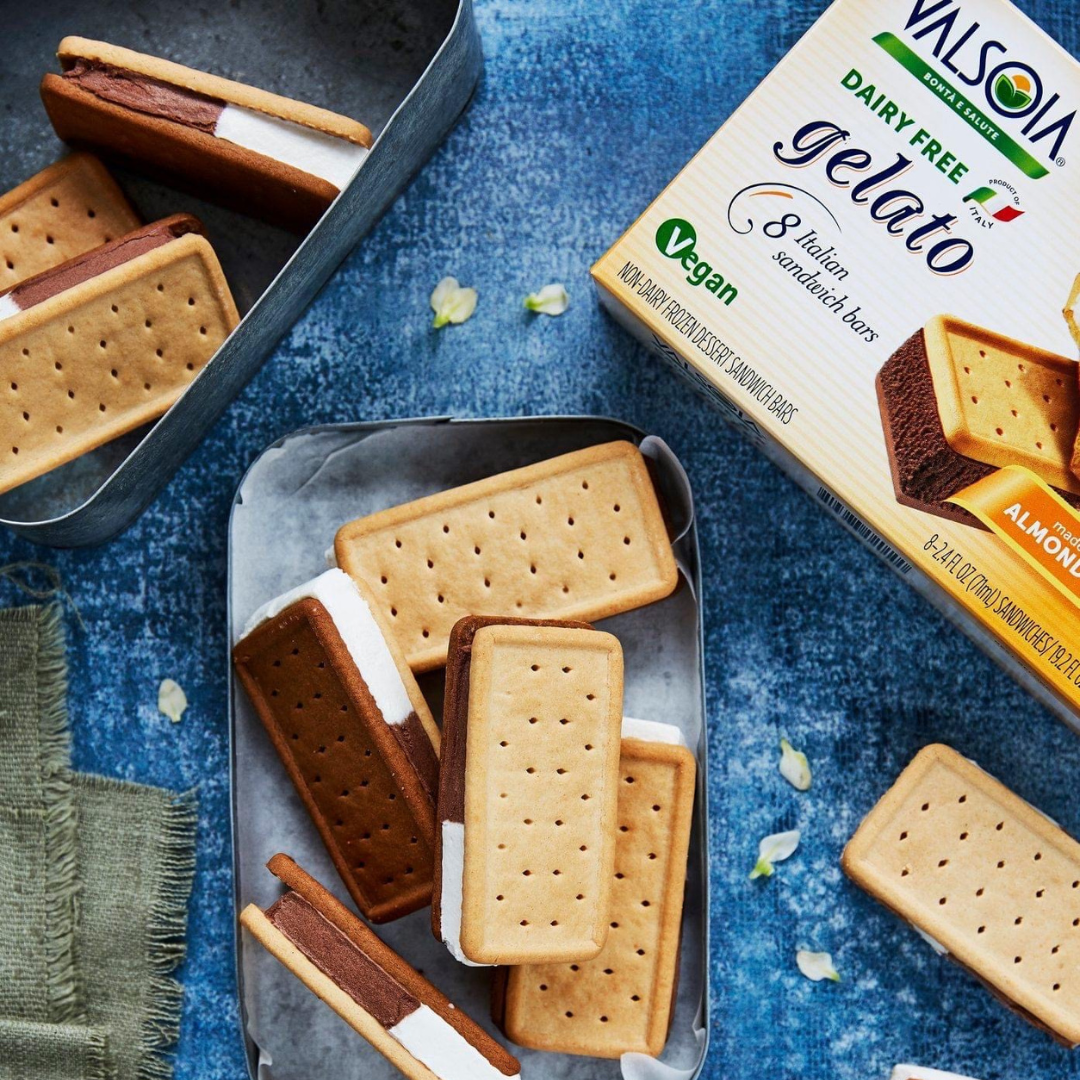 This Italian brand makes dairy-free pints, cones, and ice cream sandwiches. Its sandwich bars are stuffed with a smooth half-chocolate, half-vanilla almond-based gelato. The box of eight comes with two flavors: one featuring chocolate cookies and the other with vanilla. But, they’re so bite-sized that we would understand wanting to try both in one sitting. The flavor is rich and decadent, just like gelato should be!
Learn more here 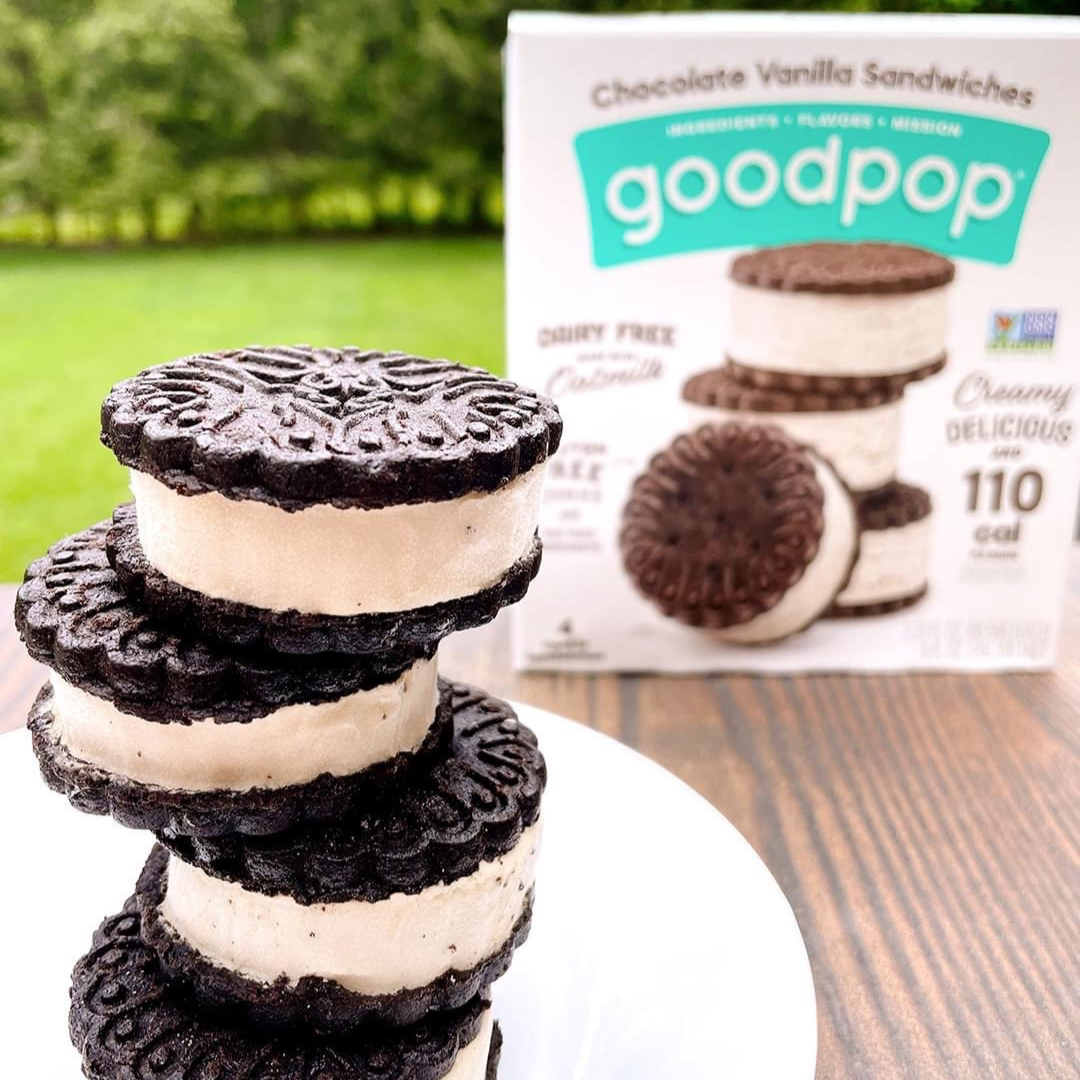 We may know GoodPop as a maker of natural fruit popsicles that we could eat an entire box of in one sitting, but did you know that they dabble in dairy-free ice cream, too? The healthy dessert brand’s Chocolate Vanilla Sandwiches feature gluten-free chocolate cookies with vanilla oat milk ice cream. It’s free from refined sugar, sugar alcohol sweeteners, and artificial dyes. We raise our dairy-free ice cream sandwiches to that!
Learn more here 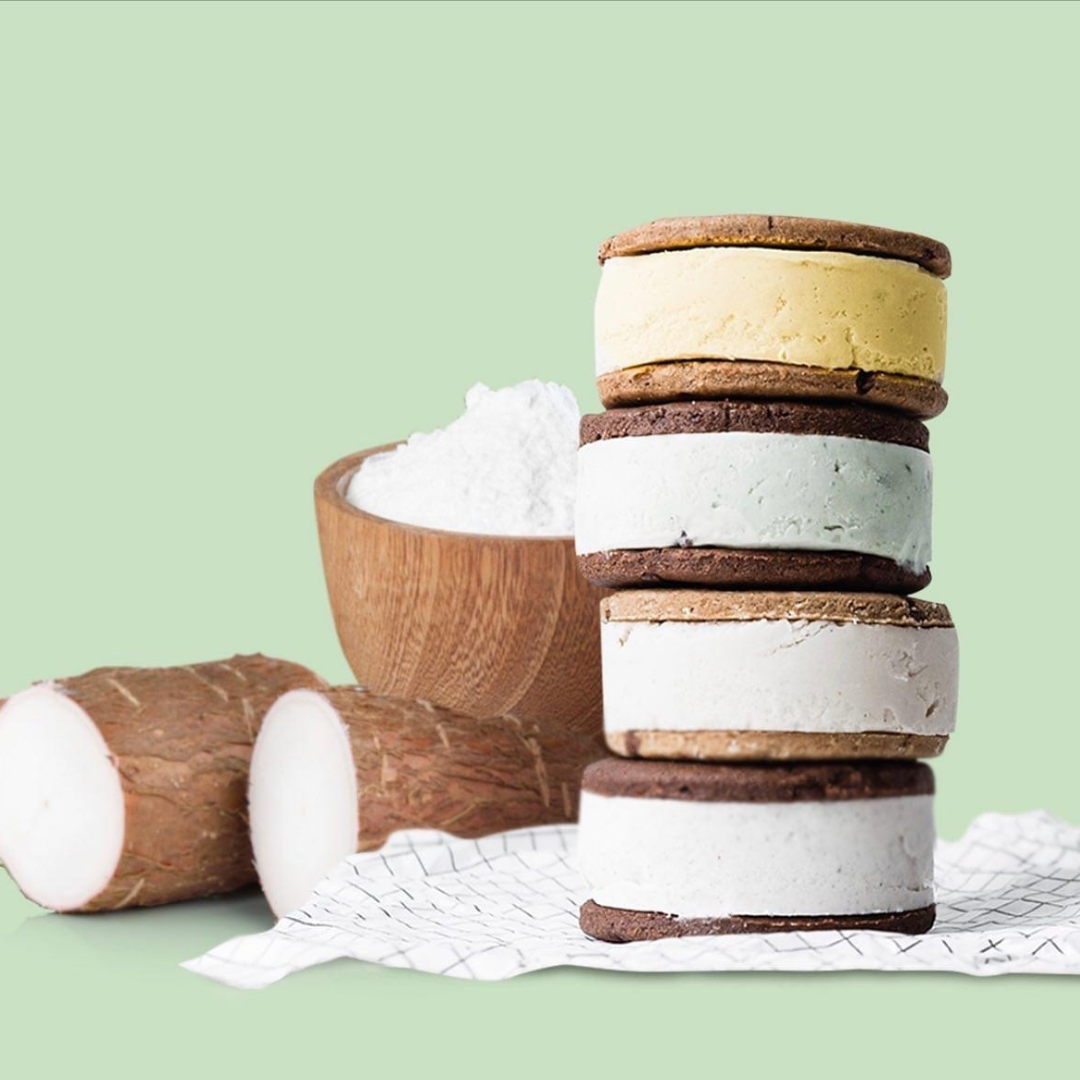 This gluten- and dairy-free artisan ice cream maker offers vegan cookie sandwiches made with superfood ingredients that have been used in traditional medicines across the globe for centuries, like turmeric, reishi, and ashwagandha. The cookies themselves are made from cassava four and sweetened with organic applesauce and coconut sugar while the ice cream is made from coconut milk.
Learn more here