While we’d prefer to support a fully vegan establishment, oftentimes, it’s just not feasible. Thankfully, finding plant-based options at chains is becoming easier by the year. No longer do we have to settle for just fries or the dreaded iceberg lettuce salad. The food has substance now. The combination bakery-café-restaurant, Panera, is one of those places where we can get a satisfying meal that won’t leave you feeling hungry and daydreaming about flavor. In this guide, we’ll go through all of the vegan options at Panera and how to hack a custom order.

How to eat vegan at Panera

Ordering vegan at Panera is simple, but it might not be obvious at first glance. That’s because a lot of the menu items can only be made plant-based by removing animal products—customization is king. Usually, the only items that you need to worry about are chicken, cheese, and dressings that contain dairy.

But, exclusively vegan soups, sandwiches, salads, and bowls could be on the way in the near future. The chain is committed to becoming “climate positive”—meaning it will remove more carbon from the atmosphere than it generates—by 2050. This will coincide with a shift toward more plant-based food options on the menu. It’s no wonder why: research has shown they are more sustainable than animal products, which are responsible for about 14.5 percent of human-caused global greenhouse gas emissions, per the Food and Agriculture Organization of the United Nations.

In addition to that, Panera announced that it will transition to circular, reusable, recyclable, and compostable packaging as well as renewable electricity for at least 50 percent of Panera-owned locations. This built upon CEO Niren Chaudhary’s 2020 announcement that the chain aims to make its menu 50 percent plant-based.

Now, let’s get into the food. The options below are based on the standard menu, but Panera often launches seasonal menus that may include vegan options. If something sounds plant-based (or plant-based with a small adjustment) but you’re not sure, you can check the chain’s allergen menu, which is regularly updated. 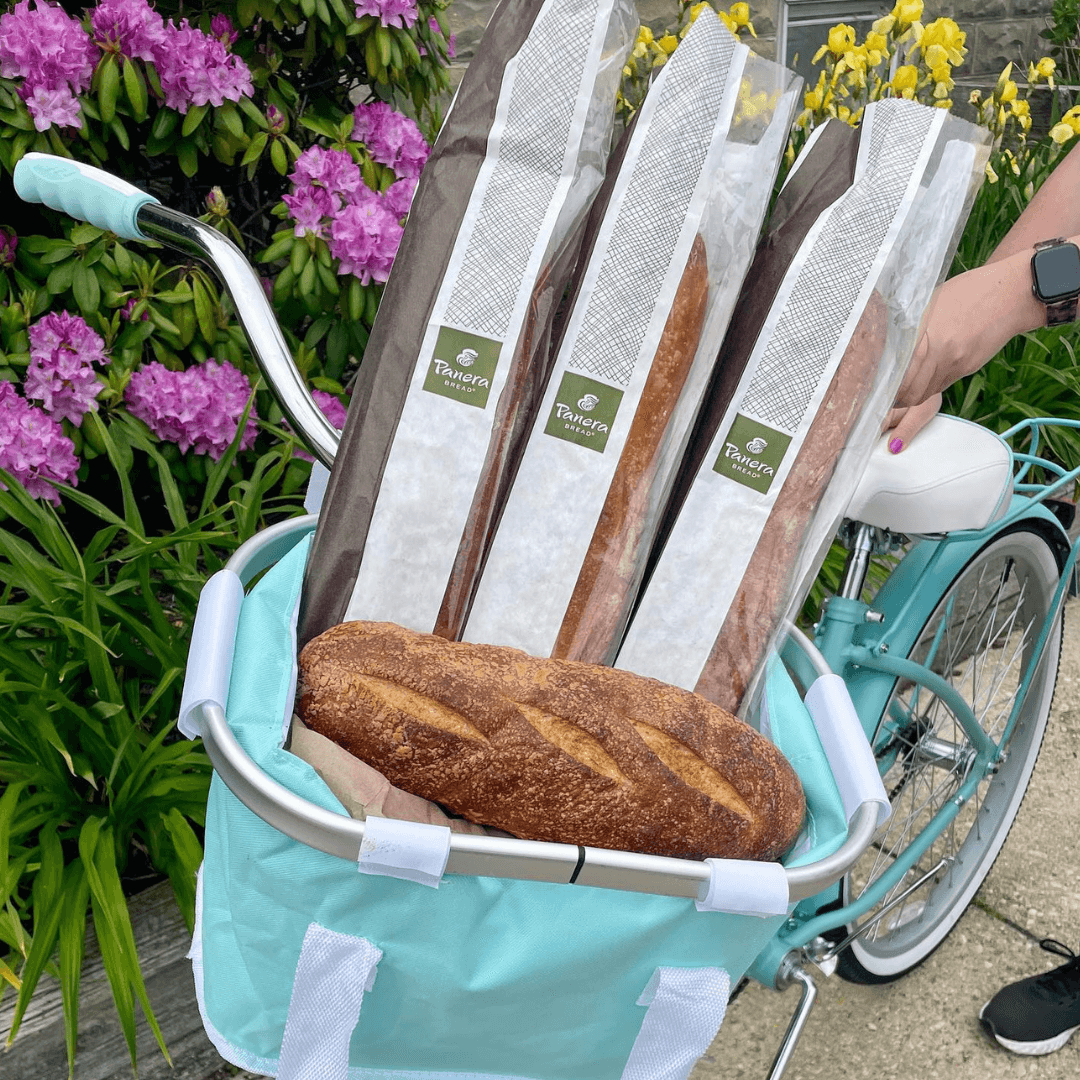 What would Panera be without the bread? The chain has plenty of vegan-friendly bread options, including full-sized artisan-style loaves to take home and enjoy with a pat of dairy-free butter as well as sandwich bread.

While the White Whole Grain loaf, Tomato Basil Miche, and the Whole Grain Lahvash Wrap appear to be vegan because they don’t contain any animal-based allergens, all of these are made with honey. But thankfully, the vegan bread options aren’t lacking: 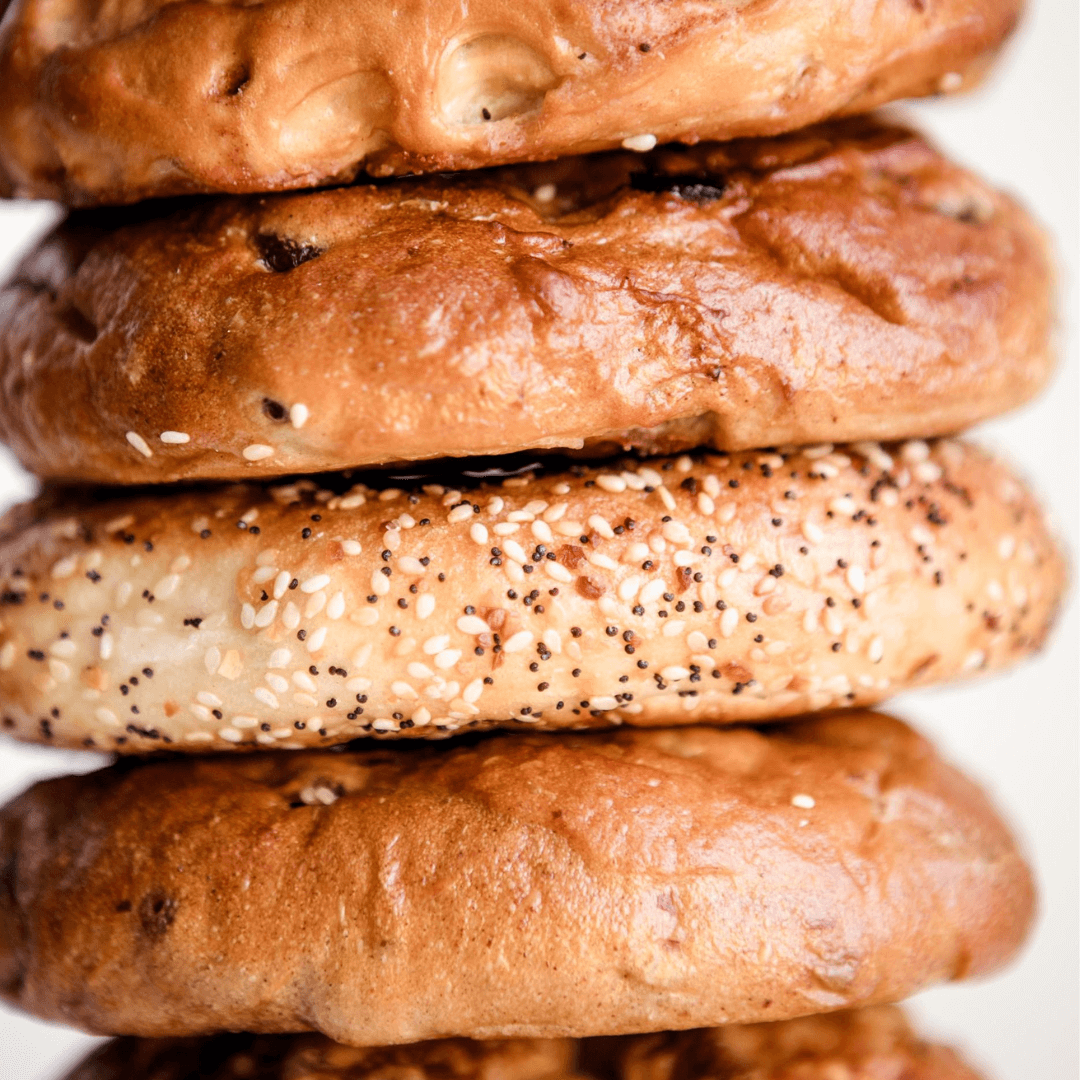 Along with hearty oatmeal and fresh fruit, the majority of Panera’s bagels are vegan. Unfortunately, there’s no dairy-free butter or cream cheese on the menu (but we’re holding out hope for the future), so order it with avocado or hummus. The Sprouted Grain Bagel, unfortunately, contains honey. Unfortunately, there are no vegan pastries at the moment, but the Blueberry Bagel might help satisfy the craving for something sweet and substantial. 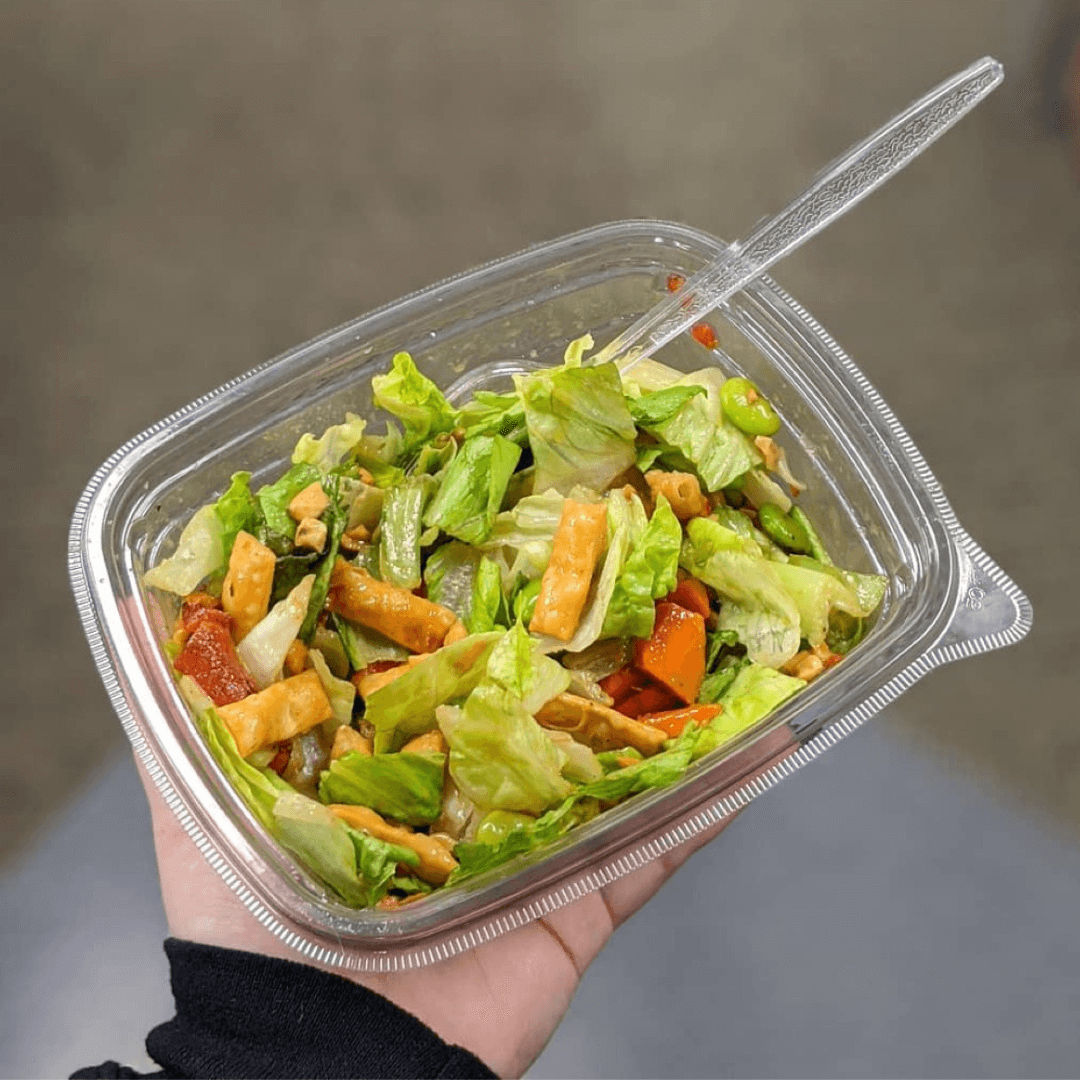 While none of Panera’s salads are vegan by default, most of them can be made plant-based with a few minor adjustments. Mainly, you need to watch out for chicken and cheese. Pro tip: add some protein back into your salad by requesting hummus or quinoa. You can also add avocado for some healthy, filling fats.

Per the allergen menu, the ingredients for the Asian Sesame Salad “may contain” egg—this is from the wonton strips, which may have traces of egg due to cross-contamination, not due to a deliberate addition to the recipe.

If the default dressing doesn’t do it for you, fear not: all of the condiments below are vegan. 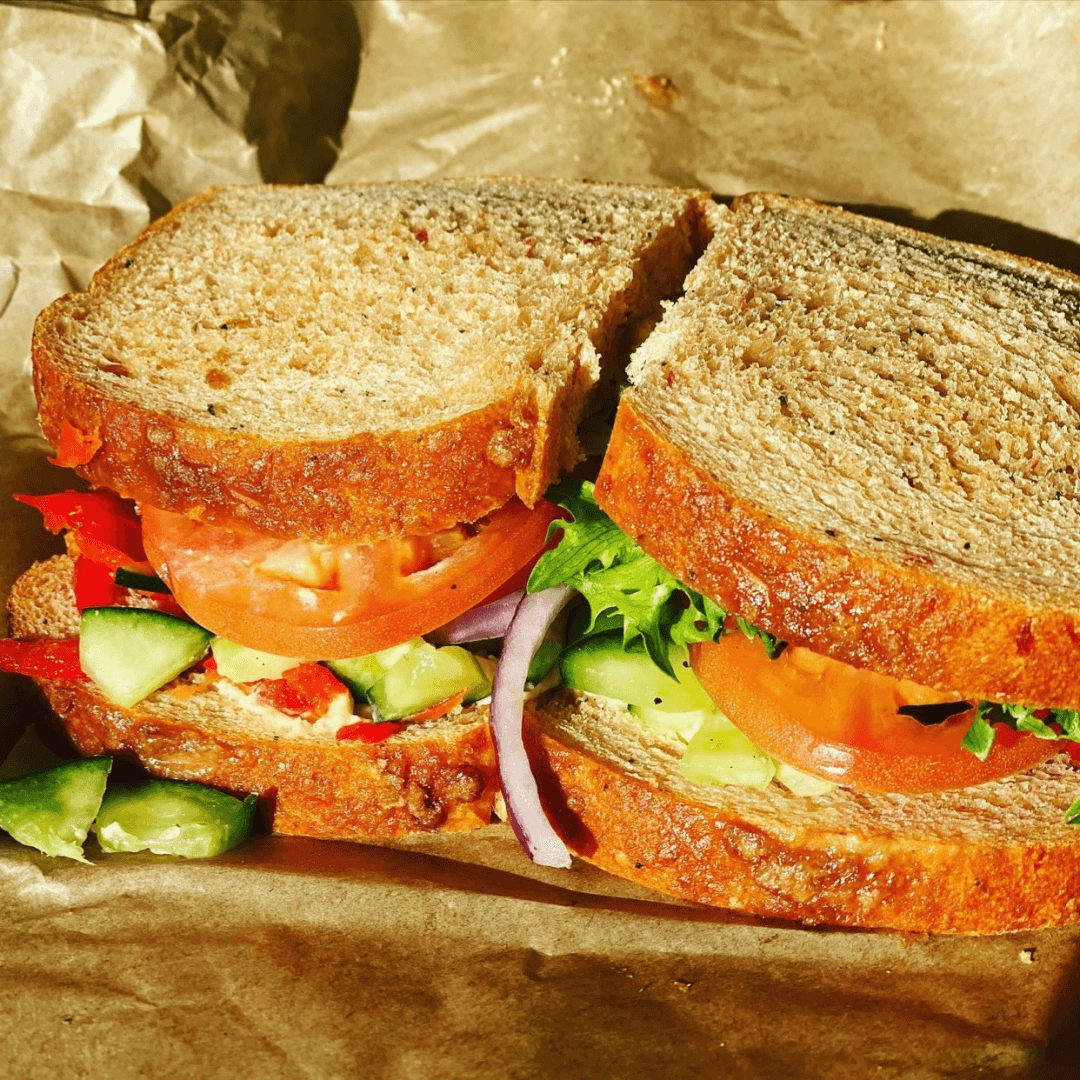 There are no default vegan sandwiches on the menu, but there is one option that’s completely plant-based if you make two modifications. Get the Mediterranean Veggie without feta and swap the Tomato Basil Miche for vegan bread—we recommend the ciabatta. It comes with Peppadew piquant peppers, cucumbers, greens, vine-ripened tomatoes, red onions, hummus, salt, and pepper. In addition to that, feel free to add a bit of sauce from the list above. The Lemon Tahini Dressing and the Spicy Mustard pair beautifully with this. 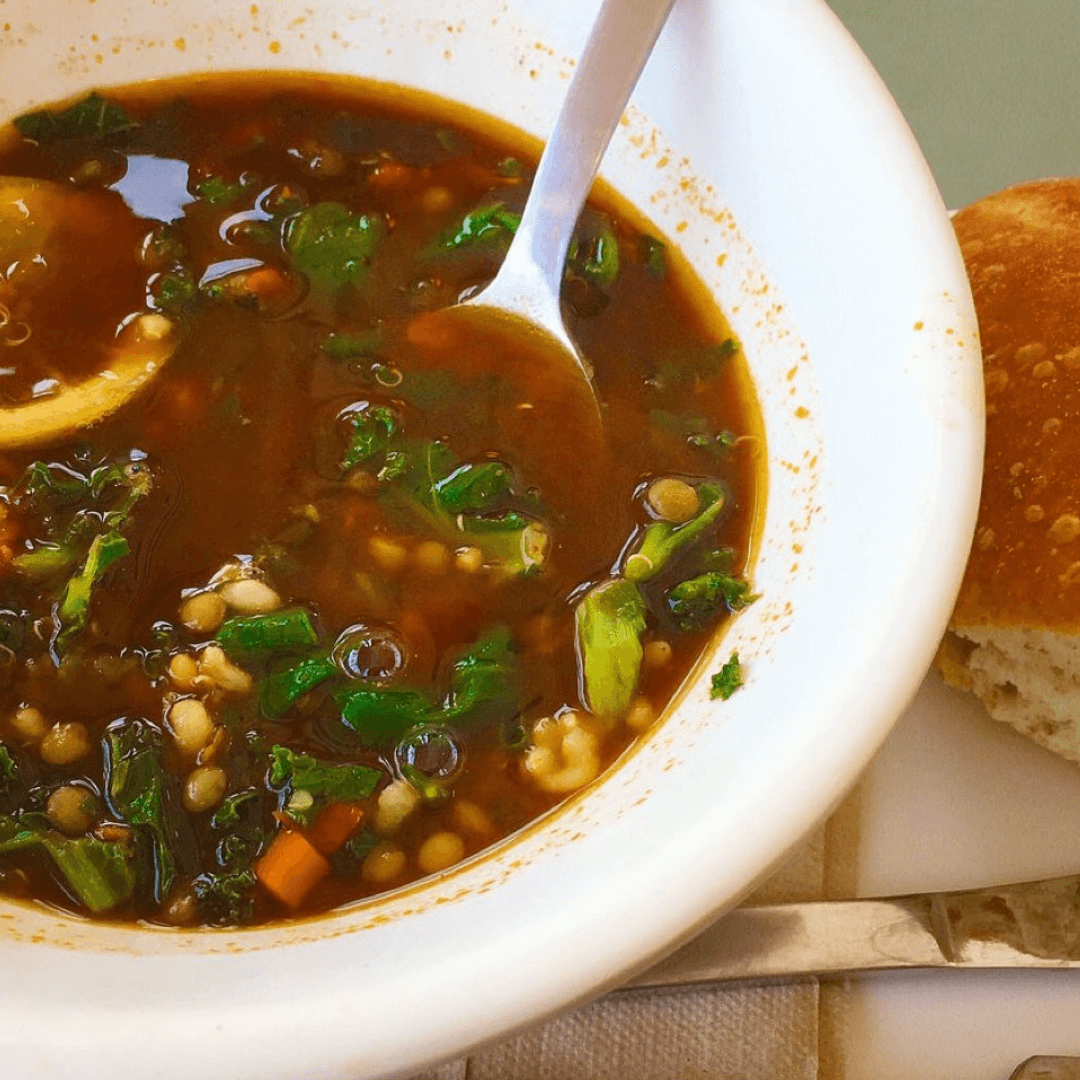 Vegan soup and bowls at Panera

The bowls at Panera are essentially a leveled-up salad that comes with a blend of quinoa and brown rice. There are no 100-percent vegan options, but there are two options that are suitable if you remove the dairy products and meat.

There’s not much in the way of soup at the moment, but the Ten Vegetable Soup features a rainbow of produce: tomatoes, red and yellow peppers, onions, corn, carrots, celery, spinach, poblano peppers, and garlic, plus chickpeas, sprouted brown rice and red fife, and dried Aleppo chilies. An extra baguette on the side is a must-have for soaking up every last drop. 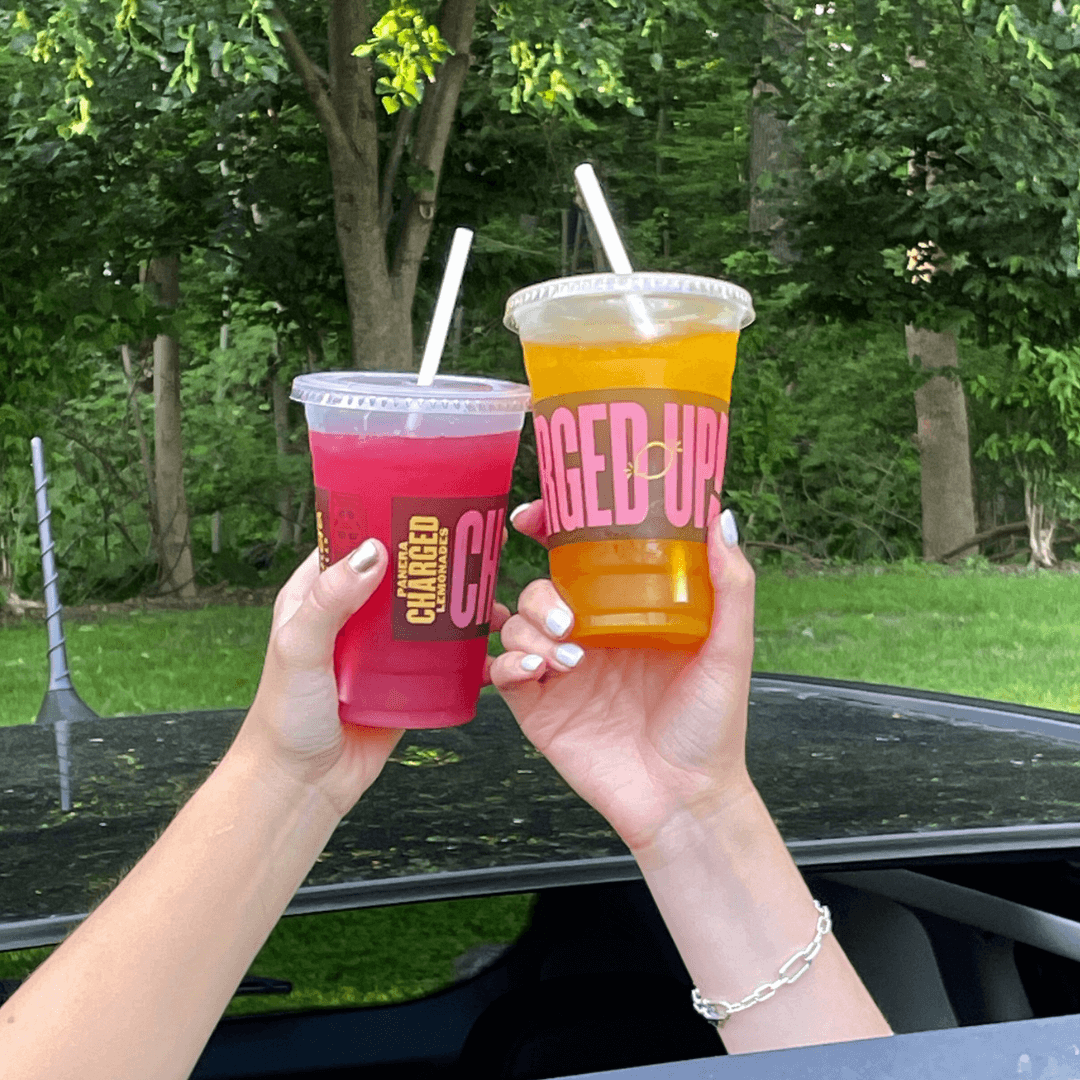 Vegan drinks and smoothies at Panera

As for drinks, there are a lot of vegan options. If you order your coffee, Americano, or cold brew with almond milk. you won’t be slapped with a surcharge because Panera did away with that policy back in 2020. (Your move, Starbucks.) For something on the refreshing side, go with one of their lemonades or seasonal iced teas. For a light meal, try the smoothies.

Need a little more to your meal? Add a side! Panera has fruit, chips, and bread to choose from. We love ordering an extra bag of kettle-cooked chips to take home.