After a couple of years of pandemic passivity, I was getting antsy and had to hit the road. It’s been a real eye opener for me—the scene everywhere has been transformed, with many restaurants around the world shuttering for good, and many more reinventing themselves with new dishes and inventive approaches. There’s a real sense of accelerating innovation in vegan dining, and it’s happening everywhere in different ways. Trends like nut-based cheeses and next level vegan meat are truly global, but that does not mean they are the same everywhere. Each place brings its own traditions and preferences to these new technologies, creating a delicious and diverse global vegan landscape. 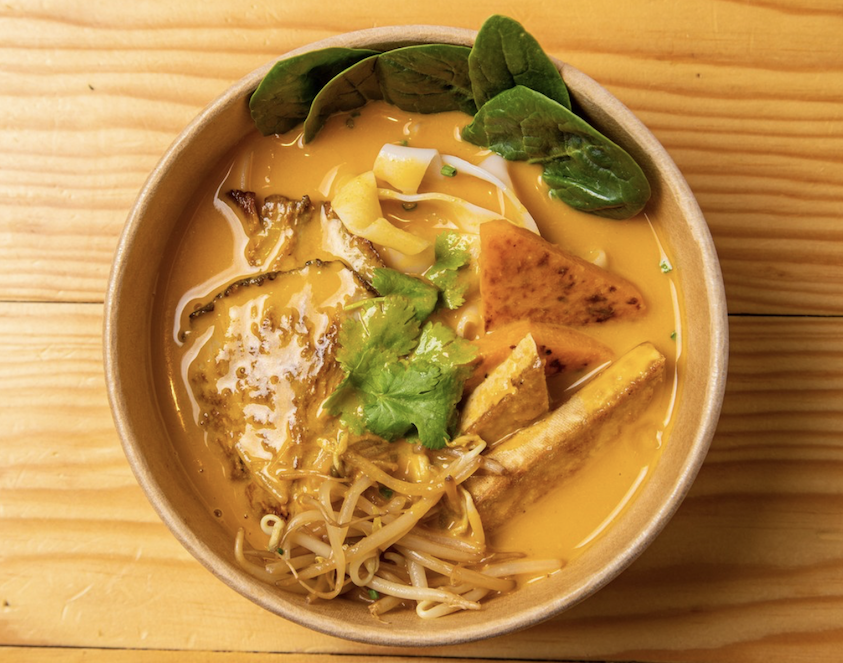 What is the best vegan restaurant in the world?

That’s what everyone wants to know, and even if it’s possible to answer, I’m not there yet. Since travel has re-opened, I’ve traveled across North America and Europe, and I’ve been blown away over and over again. From spectacular vegan sushi to transcendent vegan junk food to elegant vegan fine dining, the new global vegan banquet is truly impressive.

What vegan restaurants should go on my bucket list?

If I can’t tell you what is the “best,” a uselessly subjective concept to begin with, I will tell you what I have found most memorable so far. These seven restaurants are all worth traveling for, in case you needed another reason to visit any of these amazing cities. They’re all worth going out of your way for, even building your day around. Each one will leave you with a new appreciation for what is possible in vegan cuisine. 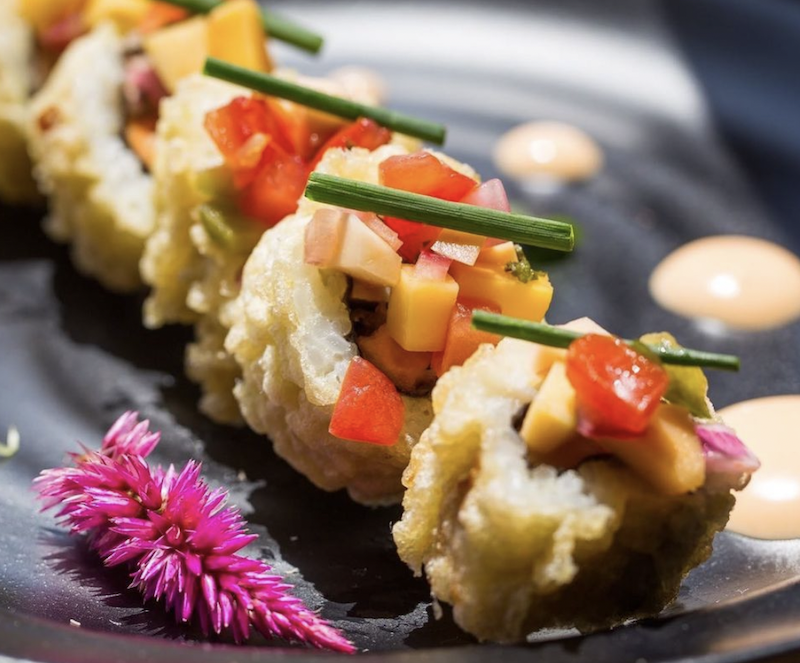 A pioneer in the global next-wave vegan sushi movement, Shizen kicked off the transformation of vegan sushi from bland avocado rolls to carefully constructed, multifaceted assemblages of perfectly-balanced textures and flavors that revolutionize the very idea of sushi.

Specialty rolls like the Proud Peacock take things to a new level. The vibrantly tricolored roll punches up cucumber and avocado with shiitake, tofu, and eggplant and then drapes them in colorful blankets of pickled mango, roasted pepper, and tomato to create an elegant and satisfying experience for all the senses.

Shizen has a lot more than just sushi: the menu includes savory and hearty choices like complex and soothing ramens and small plates of perfectly-executed tempura, kaarage, and yakisoba.

Marrying classic shojin and sushi techniques with out-of-the-box ingredients like marinated tomato, habañero, and even black truffle hummus, Shizen pulls of something magnificent: creating a Japanese vegan experience that is both true to the cuisine’s ancient traditions and setting the standard for a better way of living.
Find out more 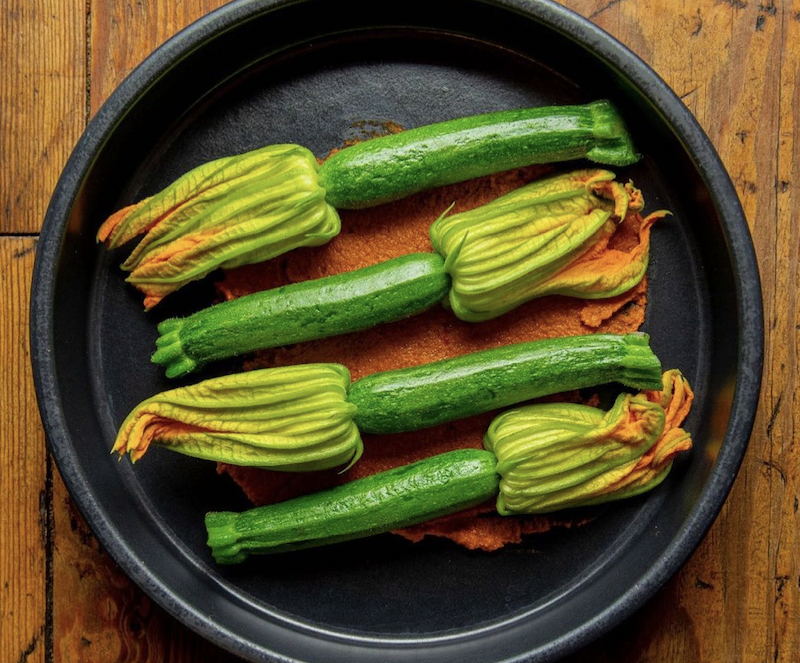 Slow food meets ethical dining at Rasoterra in Barcelona’s teeming Barri Gòtic. Sourcing everything from a “food spiral” that swirls from Catalonia around the Iberian Peninsula, the restaurant crafts magnificently conceived dishes from the produce available at that moment from their farming community.

I was there in September 2022, when the menu featured items like stuffed courgette blossoms (baby zucchinis attached like exclamation marks atop a bed of coarse, red romesco sauce) and a curry of red beets and sticky rice studded with tiny balls of chickpea sorbet.

Rasoterra makes everything in-house, including its own vegan cheeses and even its own tofu. The vibe is elegant but unpretentious, part of the restaurant’s mission to make vegan slow food accessible to as many people as possible.

The chefs are incredibly inventive, working with the land to create an unmistakable sense of terroir. A dollop of yuzu sorbet nestled against a dome of moist cake and perfectly ripe fig wedges, all drizzled with fig leaf oil, felt to me like sitting in the shade of a tree on one of Catalonia’s rural lanes.
Find out more 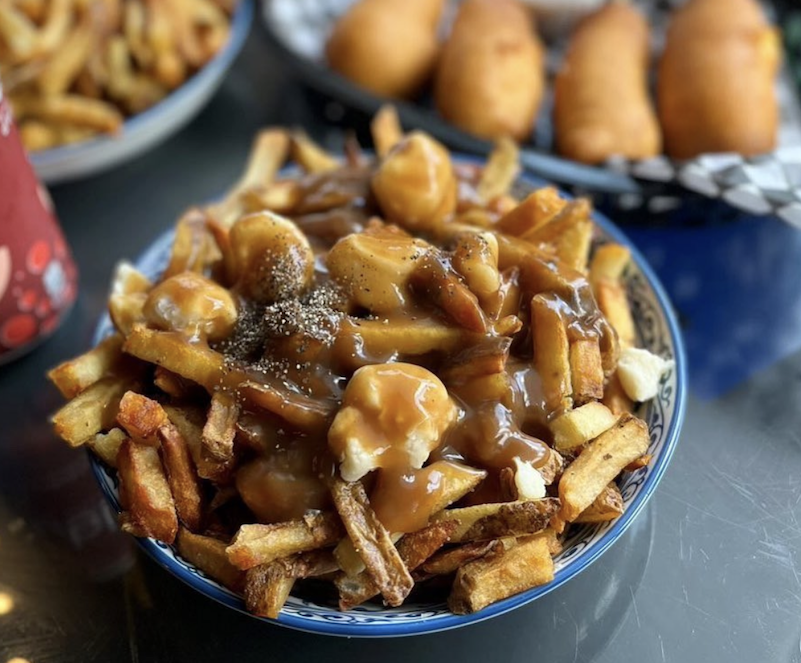 A bright, chic spot with a devoted following, Maynard takes the local, organic concept in the opposite direction: straight into the deep fryer. The tightly focused menu is centered on familiar foods like burgers and sandwiches that are both gut-busting and complex. It’s a great place to go for vegan poutine—the queen of Québécois comfort food that turns a mound of French fries, non-dairy cheese curds, and gravy into an ecstatic experience.

Maynard’s genius is combining the art of traditional French cooking with an instinct for simple satisfaction. Accordingly, the Mac and Cheez is built around a soy-based béchamel sauce and the oyster mushroom “wings” serve as a crispy, meaty foundation for the perfectly traditional buffalo sauce of Franks Red Hot whisked with vegan butter.

And Maynard is not afraid to stray from both local and organic when the results are transcendent: the Oreos Frites—deep fried Oreos in Dr Pepper batter—have a rich, succulent sweetness and surprising complexity that rivals the finest cakes or pastries anywhere.
Find out more 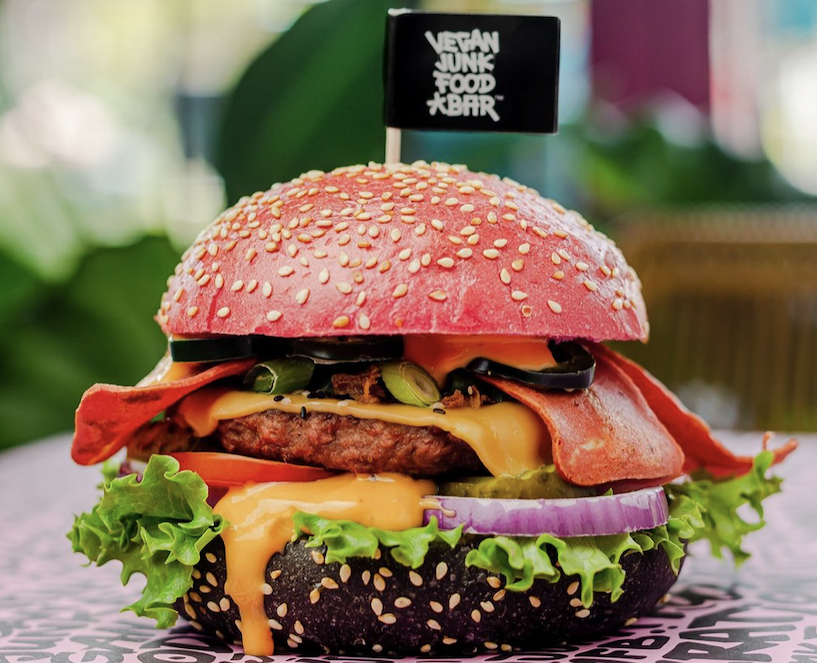 Vegan junk food is popular the world over; at a minimum you can get a burger and fries nearly everywhere. But at Vegan Junk Food Bar, a young chain that started in Amsterdam and boasts several locations in Europe, “junk” becomes high-concept.

From the aggressively pink and black street art inflected decor to the massive, electric-colored, candy-flavored cocktails, to the food itself, everything here is calculated to be just over the top enough to make you feel like a kid on your first trip to an alternate reality.

The menu is straightforward—burgers, fries, nachos, and shawarma, plus a few more unusual items like vegan sashimi and “betterballs”—but it’s the execution that makes Vegan Junk Food Bar soar. The place revels in plant-based meats: they make their own and they’re really good at it. Besides burgers, the “Ribs” and the “Fish” are succulent standouts. They’re served on sesame seed-studded house-made buns (pink and black, naturally) piled high with all the fixin’s and then some.

It all makes your fingers drip with deliciousness, and it’s the kind of place where you can’t help but lick them off.
Find out more 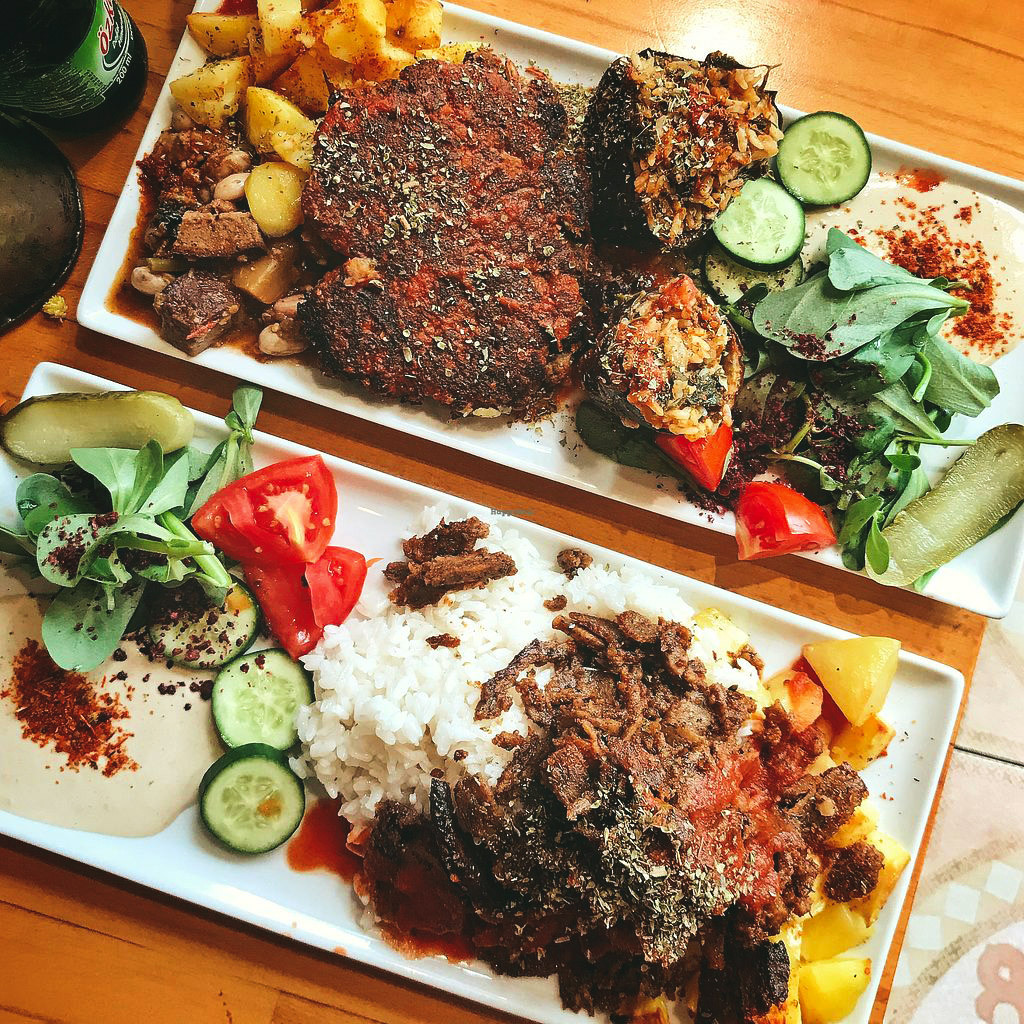 At its core, every vegan business comes from a place of love. Few have as much heart as Istanbul’s Vegan Community Kitchen. In a country where veganism is a newer concept than in many of the others on this list, founder Oya Ersoy was an isolated, solo vegan ten years ago. “I didn’t know any other vegans,” she says. “I just fed the cats and dogs at home … I had to be vegan because how else could I be concerned for animals?” (Feeding the countless independent cats and dogs is an ancient tradition in Istanbul.)

In 2013, during the protests against Turkish President Recip Erdogan’s anti-democratic policies that rocked the country for weeks, Ersoy set up a community table serving free vegan food in Taksim Square, Istanbul’s political heart, where a camp of thousands of protesters had established itself. The table led to the birth of a network of politically active vegans, and grew into her restaurant.

In the charming and less-touristy Balat neighborhood, Vegan Community Kitchen is a tiny hole-in-the-wall (literally—it sits inside an old Byzantine brick arch) serving a tightly focused menu of traditional dishes like Ersoy’s seitan-based doner on her fresh Turkish flatbread with rice-based yogurt and chili sauce. Everything is homemade: she makes the seitan from scratch in her house across the street, and it comes across in the flavor. It’s chewy and fresh, deeply satisfying fare.

Paired with a glass of vegan ayran—the Turkish sour yogurt drink—and listening to Ersoy talk and talk about the food, about politics, about the animals, about the neighborhood’s history was a humble highlight of my visit to this ancient, storied city.
Find out more 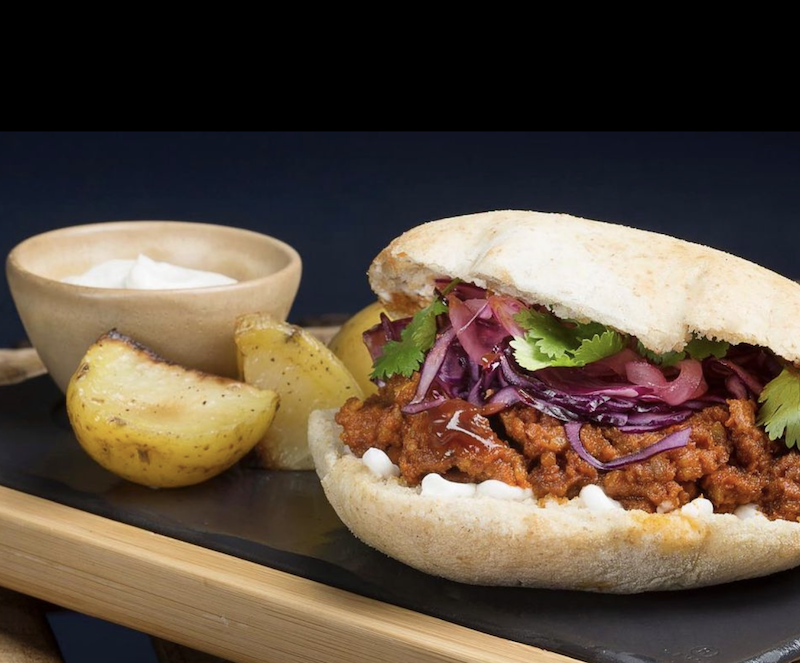 This is the epitome of good living: sitting in the sun on a generous patio, surrounded by the happy bustle of the hip Poblenou neighborhood, housemade green tea and lemon kombucha by my elbow, tucking into a vegan pulled pork sandwich at Blu Bar.

The pork—made from walnuts, sun dried tomatoes, olive oil, and spices—is piled with coleslaw, pickled onions, cilantro, mayo, and barbecue sauce and served in a toothsome bun crafted to order from fresh pizza dough. It’s the most popular item on a varied menu that also includes salads, bowls, a raft of pizza and focaccia made using local vegan cheese, and plenty of cocktails.

It’s all real food, created from whole ingredients with a menu designed to convert people to vegan living. “In a way we are doing soft activism,” says co-owner Dario Lombardi “People come here, they have so much fun, they love the food, and they think ‘Wow, I could be vegan actually!’”

Everything at Blu Bar is fresh and expertly made, with a kind of effortless perfection that embodies Lombardi’s easygoing motto: “Veganism is a lot of fun!”
Find out more 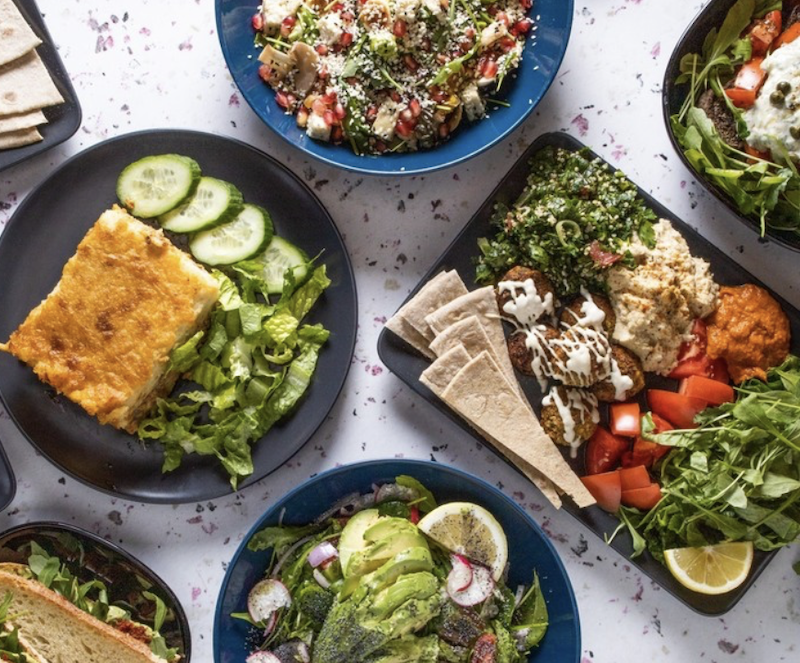 In a small but elegant space across the street from a park loaded with ancient ruins, Veganaki has a friendly and self-assured feel and excellent food. The Greek salad and souvlaki I tried were complex, vibrant, and simply tasty reminders that even a meat-heavy traditional cuisine can make the leap to veganism without missing a beat.
Find out more

Gregory Dicum is traveling the planet with his family while world schooling his son. Join him on Instagram @misterpixer.