The Venetian Resort in Las Vegas is celebrating World Vegan Month (November) with more than 50 plant-based dishes. The resort will present elevated vegan menus, with many new plant-based dishes, at all of its signature restaurants starting on November 1.

The resort’s location of Hong Kong import Mott 32 is recreating more than a dozen of its signature dishes for World Vegan Month to expand its existing vegan options. The eatery’s Peking duck got a vegan makeover with tofu skins taking the place of meat while coconut meat stands in for squid in Mott32’s Salt & Pepper Squid dish. The eatery also remade its popular Shanghainese Soup Dumplings, Stir-Fried Beef, and Signature Smoked Cod using plant-based meat alternatives. 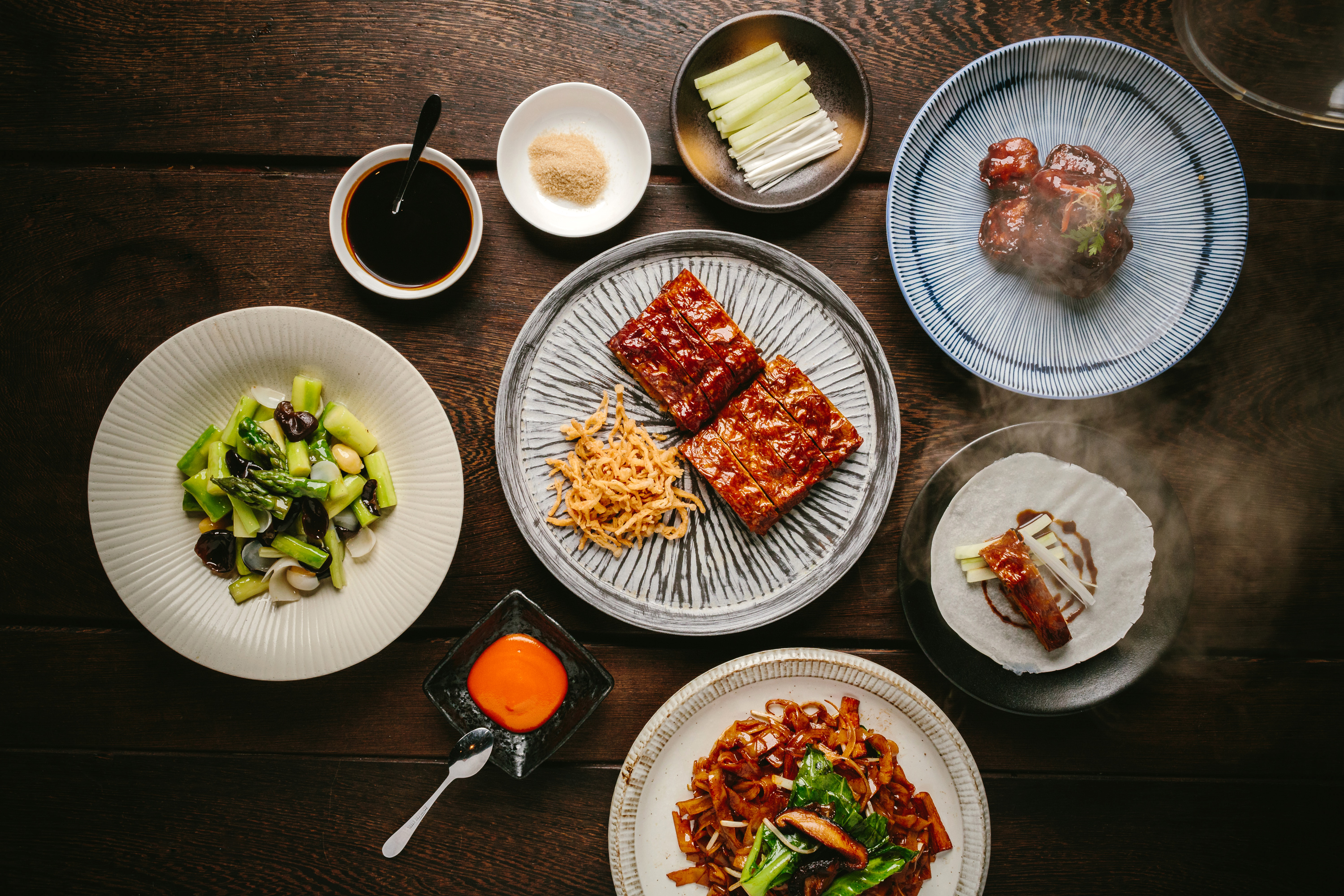 Celebrity chef David Chang—owner of the famed Momofuku chain of restaurants and an early supporter of plant-based company Impossible Foods—is getting in on the World Vegan Month celebration at his Majordomo Meat & Fish restaurant inside The Venetian. At the Asian-American steakhouse and seafood restaurant, Chef Chang concocted a new vegan option, “Macaroni with hozon,” which he spikes with a fermented chickpea miso to add an element of umami without using dairy cheese.

“It sounds a little bit crazy—but it’s a play on macaroni and cheese,” Chef Chang said in a statement. “We make our own proprietary fermented chickpea—we basically make miso out of it. When you ferment it, it has a lot of notes of parmesan—that natural umami is developed. It’s the same flavors that I find in Pecorino Romano and really good aged parmesan. I was like ‘why don’t we turn that into a pasta dish?’ Believe it or not, there is no cheese in it. But when you taste it, it tastes so familiar, like the best version of mac and cheese you’ve ever had.”

Other restaurants at The Venetian resort will also highlight their existing vegan fare, including famed French eatery Bouchon—a favorite of the late Anthony Bourdain—which offers the “Vegan Chop” a mixture of grain and mushroom formed into the shape of a pork chop and served with seasonal vegetables. The Venetian location of New York City’s Black Tap Craft Burgers and Beer is also serving Vegan Nashville Hot (a portabello burger topped with hot sauce) and a Vegan Black ‘n White CakeShake (an over-the-top milkshake accented with a black ‘n white cake slice, vegan whipped cream, a vanilla frosted rim with chocolate chips, and a finishing chocolate drizzle).

In addition to individual vegan dishes at its restaurants, The Venetian’s BRERA osteria—an upscale Italian eatery helmed by chef Angelo Auriana—will offer a new four-course vegan tasting menu. Here, guests will be treated to an Insalata course (with a choice of two vibrant salad appetizers); a pasta course (with two choices between garganelli made with san marzano tomatoes, Romanesco, garlic breadcrumbs or farro risotto with garbanzo beans, parsley, roasted eggplant crema, and extra virgin olive oil); and a “secondo” course (with three choices between spiced polenta, gremolata-topped cauliflower, or eggplant). For the dolce (dessert) course, Chef Auriana will serve a coconut tapioca pudding with passion fruit sauce and seasonal berries. 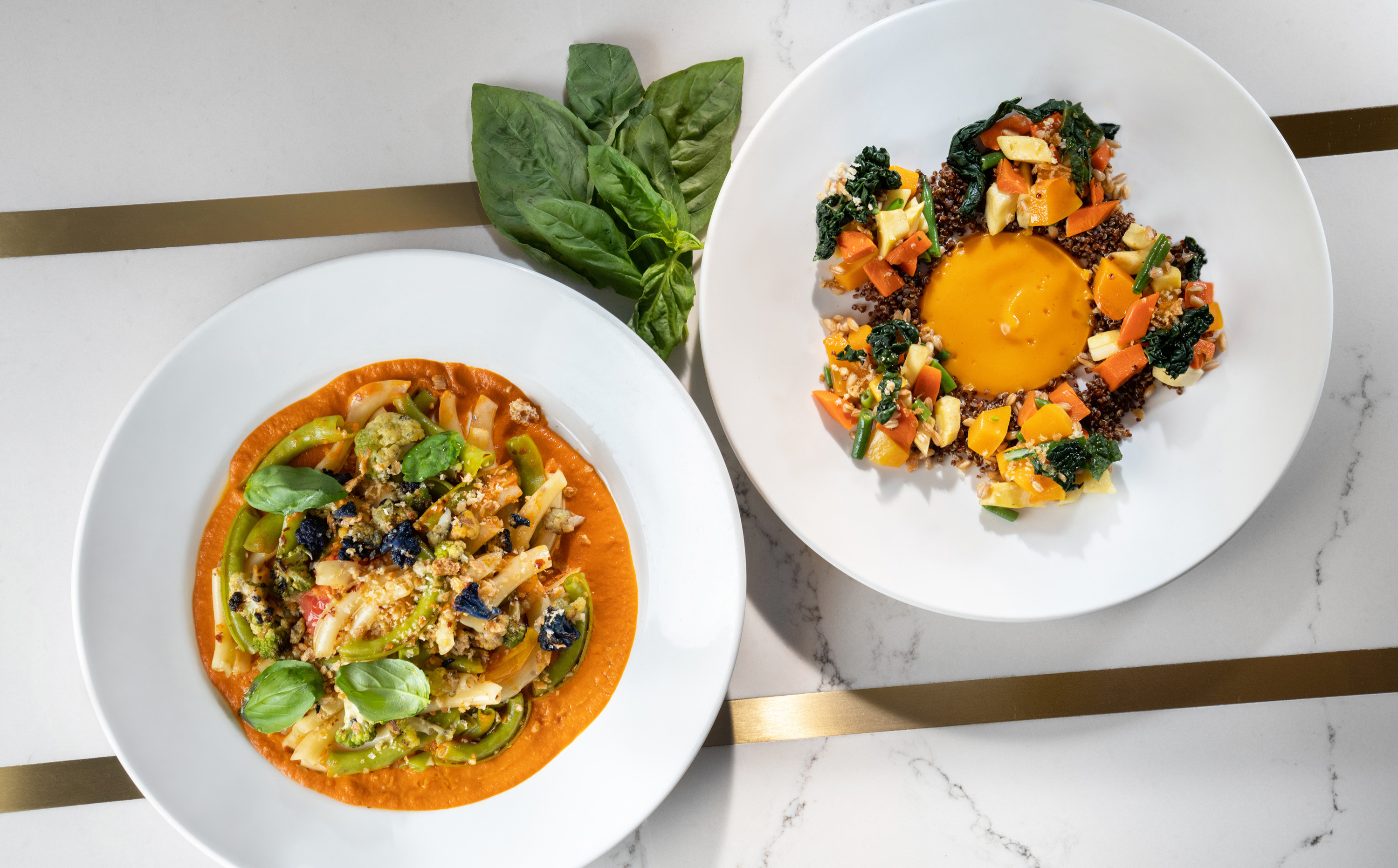 “Vegans are often forgotten so we created a new menu that is plant based—and full of flavor— using the freshest seasonal ingredients with an artistic presentation. We have even gotten positive reviews from our regular meat-eating clientele,”
—Chef Angelo Auriana of BRERA Osteria

At his other restaurant inside The Venetian, Matteo’s Ristorante Italiano, Chef Auriana is also adding a new vegan pasta dish made with freshly extruded garganelli pasta, zucchini, nardello peppers, basil, and spicy tomato crema. “It is so rich and creamy, guests won’t notice we don’t use cheese,” Che Auriana said in a statement. 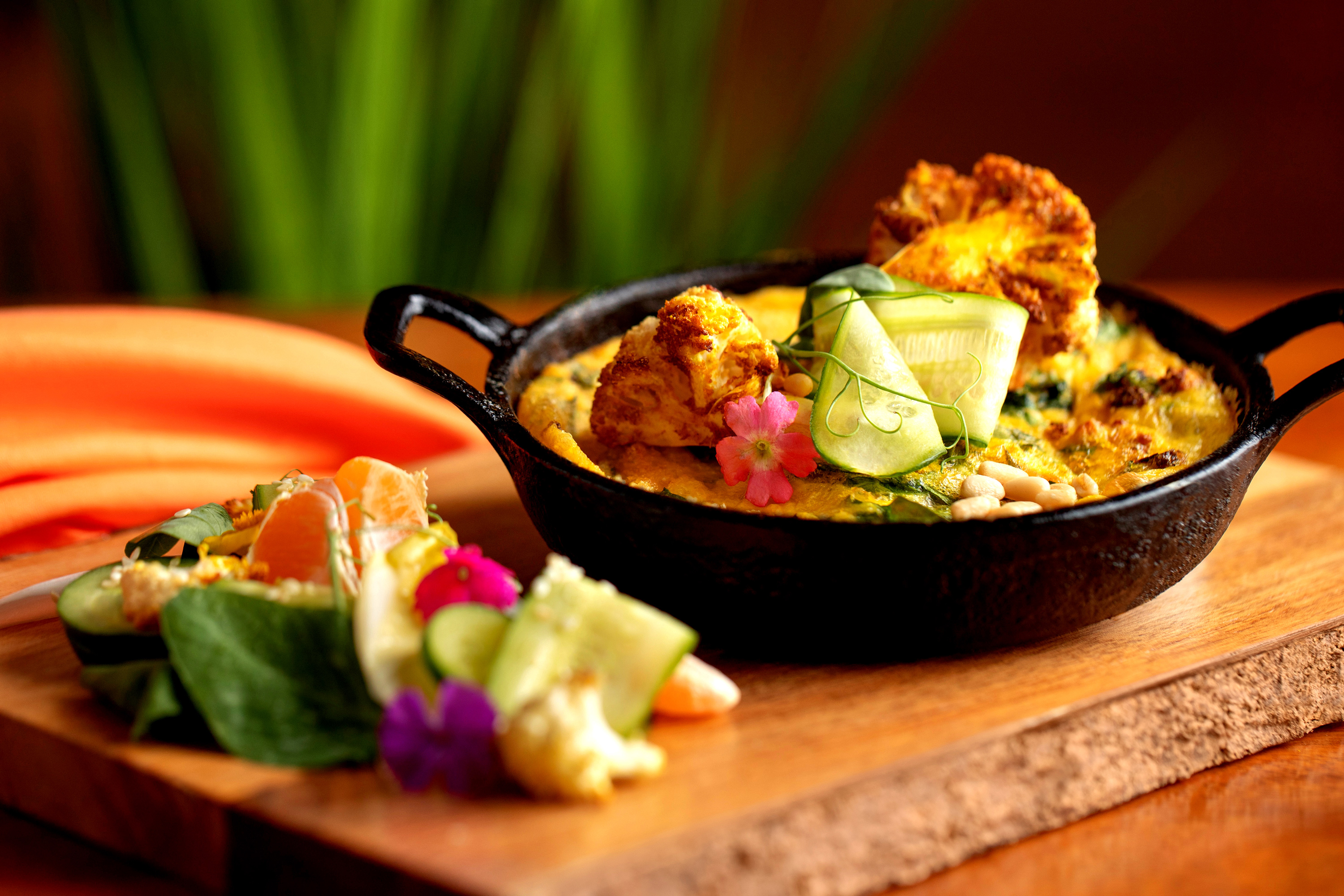 In recent years, Las Vegans got many more vegan options. In 2019, NoButcher opened as the city’s first vegan butcher shop with a large deli case to showcase the company’s vegan meat products (such as NoTurkey, NoPepperoni, and NoBacon), a dine-in area with communal seating (for guests to enjoy deli items such as vegan pulled pork sandwiches and potato salad), and a drive-thru for customers who are short on time.

Beloved vegan taco shop Tacotarian has been operating in the city since 2018. From recreating birria (goat meat) from plant-based ingredients to constructing the largest vegan taco in the universe (a whopping seven-inch monster it launched for World Vegan Day 2019), Tacotarian has been living up to its motto to “turn Vegas vegan one taco at a time”—which rang particularly true in March when Vice President Kamala Harris stopped in for a few tacos to fit into her “vegan before 6pm” lifestyle.

For more about vegan food in Las Vegas, read:
A Professional Vegan’s Guide To Las Vegas

The Complete Guide to Matthew Kenney’s Vegan Restaurants: From Los Angeles to Boston