“We are continuously reimagining convenient, plant-based options for everyone to enjoy during every meal of the day,” Cole Orobetz, co-founder & CEO of Alpha Foods, said. “There is such a huge lack of plant-based breakfast options, we knew we had to bring something delicious to the category—and these breakfast sandwiches … are just that. As a brand, we will continue to identify those holes and fill them with innovative products that vegans, flexitarians, and meat lovers can enjoy together.”

After the Costco launch, Alpha Foods will bring the plant-based sandwich (in the Meatless Sausage, Plant Egg & Cheeze and Chorizo, Plant Egg & Cheeze flavors), along with three vegan breakfast burritos (Protein Supreme, Bac’n Scramble, and Rockin’ Ranchero) to retailers nationwide in June. “When innovating new plant-based options that can satisfy the masses, our focus is on high-quality ingredients with exceptional flavor and texture,” says Loren Wallis, co-founder & Chief Innovation Officer of Alpha Foods. “The new breakfast sandwich and breakfast burrito lineup features our next generation Alpha proteins with fewer ingredients and the most authentic taste and texture yet. Leading edge plant-based innovation is a hallmark of Alpha Foods and these new breakfast items truly deliver on the convenience and craveability factor that we know our consumers demand.” 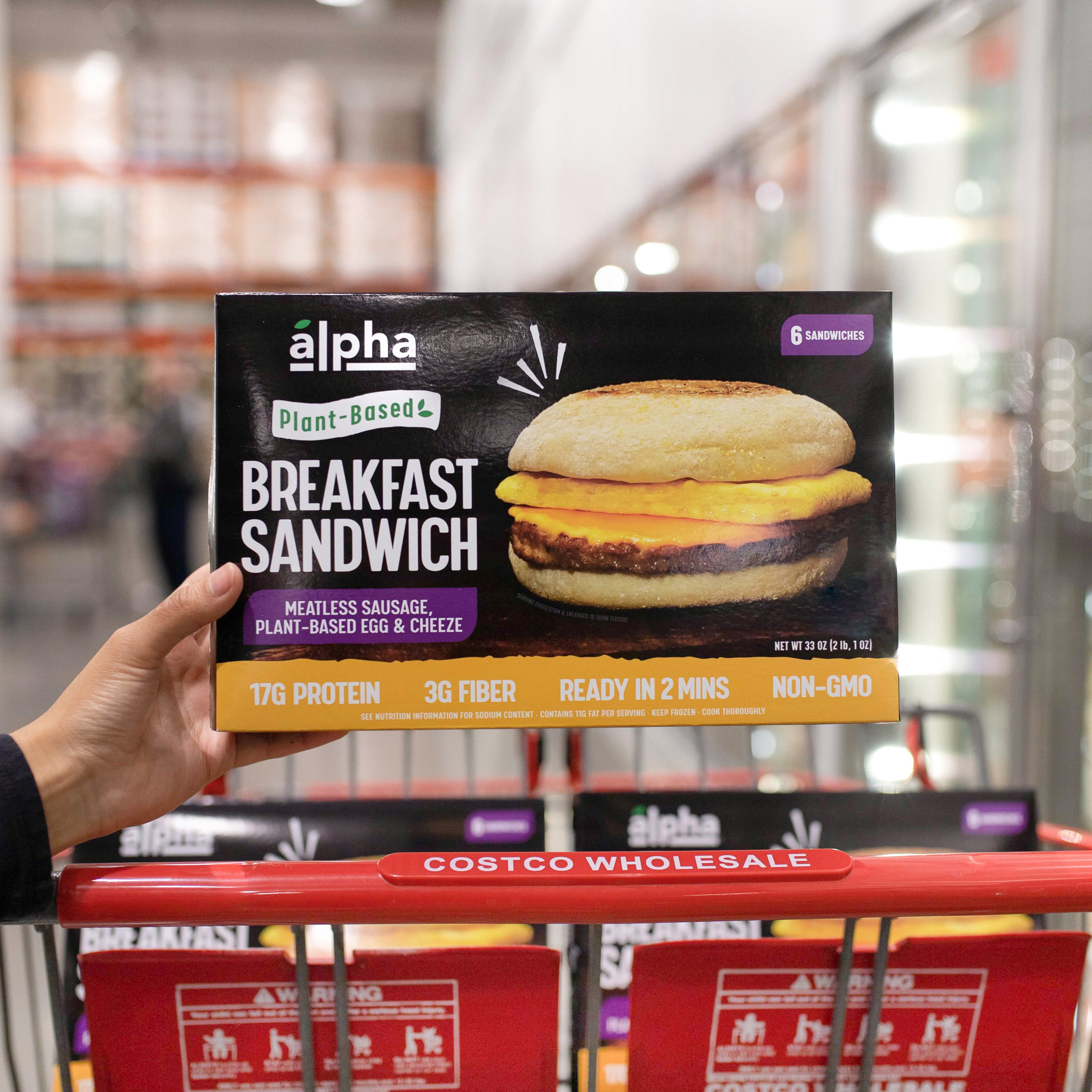 Alpha Foods offers a variety of frozen plant-based products, including pot pies, pizzas, tamales, and its own vegan meat line. In 2020, the brand also launched its Plant-Protein Crispy Chik’n Patties at Costco locations in the Southeast region, Los Angeles, Hawaii, and Texas.

In recent years, Costco has expanded its selection of plant-based products, particularly vegan meats and cheeses. Currently, select locations of the wholesale store offer Beyond Burger and Beyond Meatballs, plant-based chicken made by Daring Foods, Daiya Foods cheeses and vegan ice cream bars, JUST Egg vegan egg replacer, and more. In addition to expanding its selection of packaged vegan goods, this spring, 30 Costco locations in Hawaii and Los Angeles began testing Chef Ayinde Howell’s Jalapeño & Cheddar Mac & Yease, which is available in 32-ounce take-and-bake trays in the prepared foods section of the store.