Today, vegan brand Beyond Meat introduced the Beyond Chicken Tenders at nearly 400 restaurant locations across North America. The new breaded vegan chicken tenders are made from a combination of faba beans and peas and deliver 14 grams of protein per serving. Unlike their animal counterparts, Beyond Chicken Tenders are free from cholesterol, antibiotics, hormones, and animal cruelty. The tenders were developed to serve as a substitute for chicken in appetizers, entrées, salads, sandwiches, and more.

The new vegan tenders will be served at chains such as Dog Haus, Epic Burger, Toppers Pizza, and Fire Wings. A full list of restaurants that will offer the Beyond Chicken Tenders can be found here. Additionally, Toronto-based vegan grocer Good Rebel Vegan Provisions is offering Beyond Meat’s new tenders (in 8-packs and 5-lb bulk bags of 50-52 pieces) for delivery across Canada. 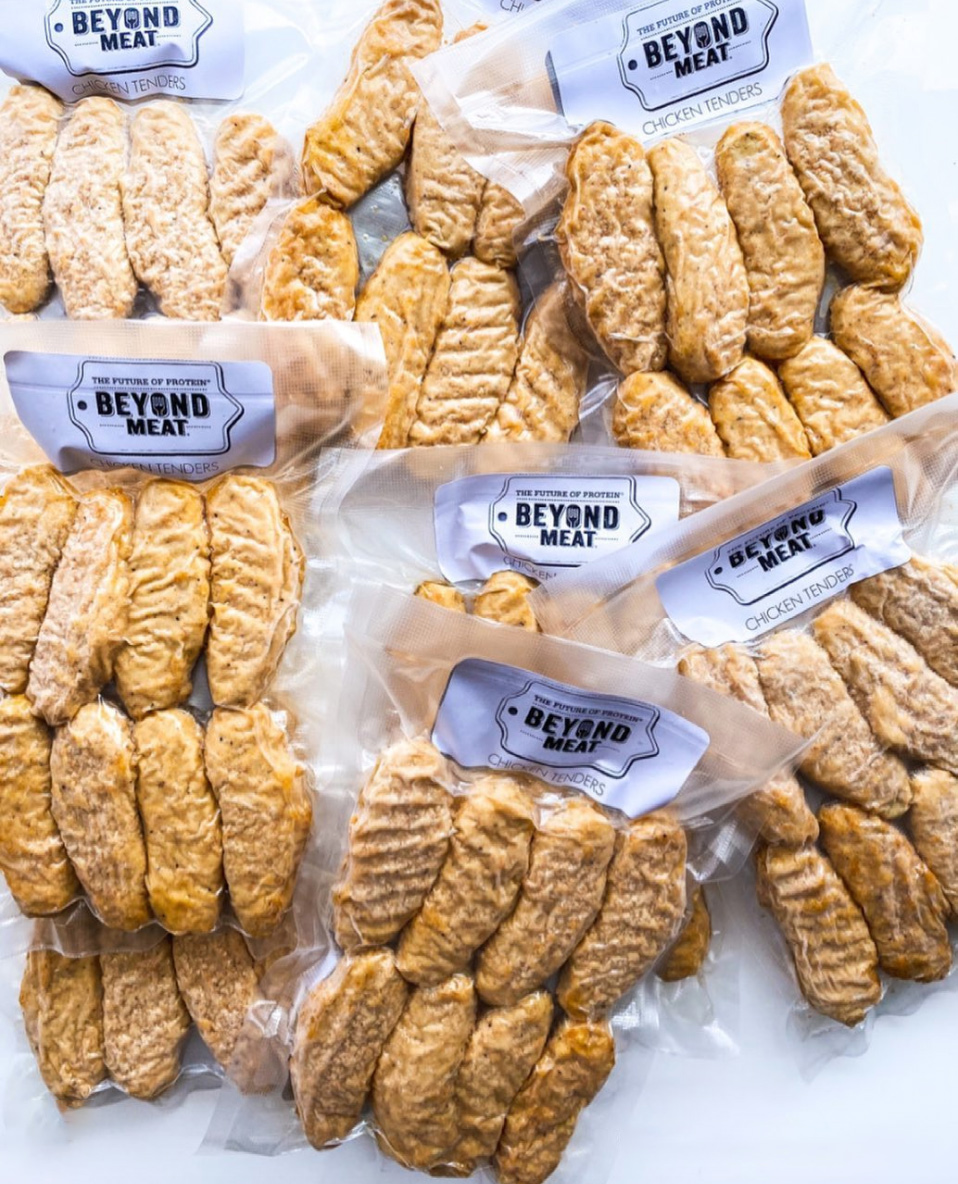 While the brand is known best for its Beyond Burger (a vegan beef alternative) and Beyond Sausage (a vegan pork alternative), Beyond Meat was actually a pioneer in making vegan chicken as far back as 2012, when it offered (now discontinued) chicken strips. With the new Beyond Chicken Tenders, Beyond Meat’s team of more than 200 innovators have spent nearly a decade perfecting a new plant-based chicken product to meet consumer expectations. 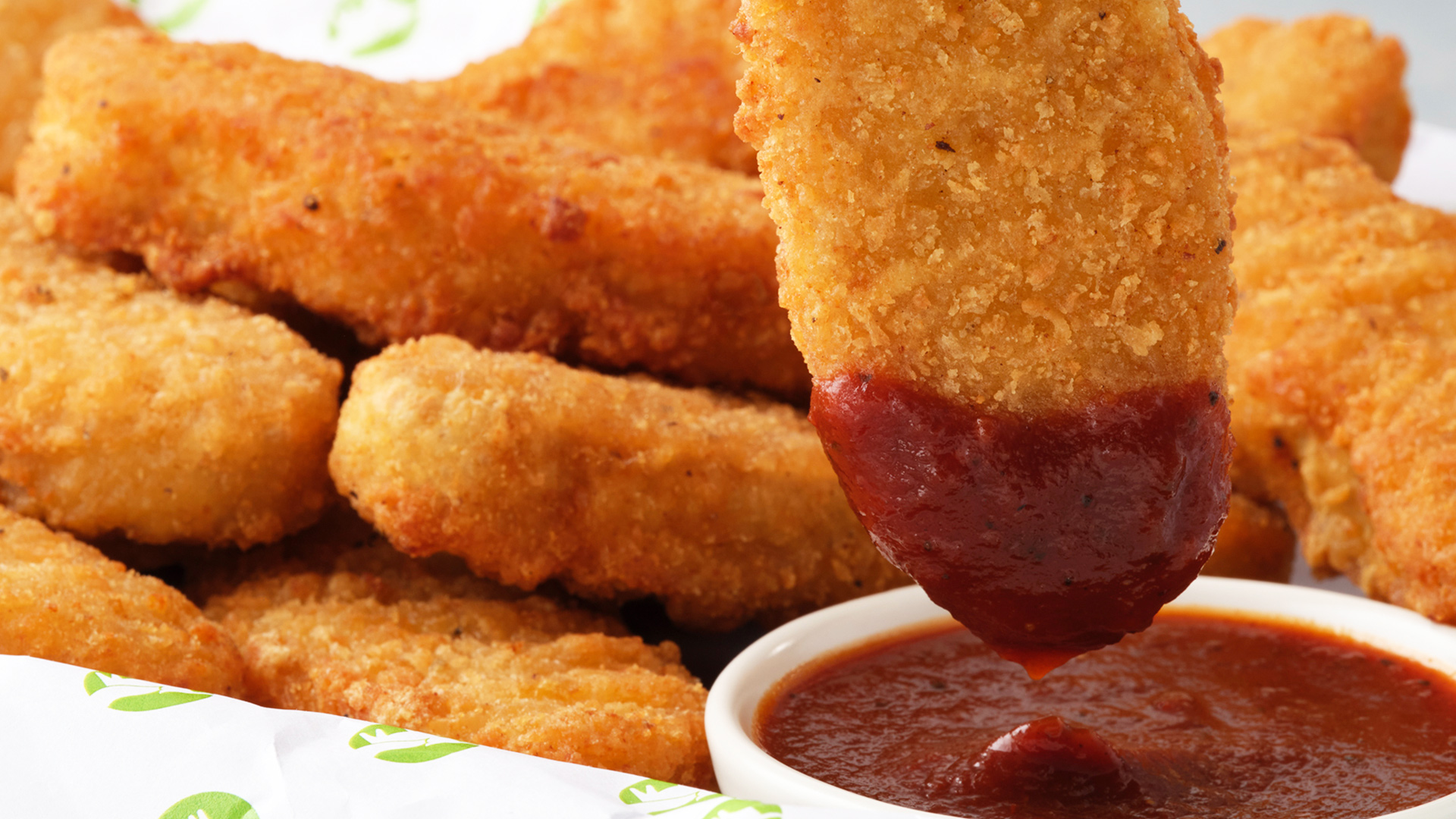 The new Beyond Chicken Tenders are entering the foodservice channel during a time when animal chicken is in short supply due to COVID-19 production disruptions and an increased demand caused by the popularity of chicken sandwiches at places such as Popeyes, Chick-fil-A, and KFC. Beyond Meat hopes to use this opportune time to introduce its new vegan chicken tenders to restaurant partners that may be searching for a viable alternative as chicken supplies run low.

The National Restaurant Association (NRA) has already given the vegan tenders its stamp of approval by way of a 2021 Food and Beverage (FABI) Award, marking the fifth time Beyond Meat has received a FABI for its plant-based innovations. “Beyond Chicken Tenders are a craveable, crispy, and delicious plant-based product that meat-lovers and veggie-lovers alike will dunk, crunch, and love,” the NRA said. “In consumer testing, Beyond Chicken Tenders scored on par in likeability with the leading animal-based chicken tender, making them a must-have menu item that will elevate your menu to compete in the Chicken Wars.” 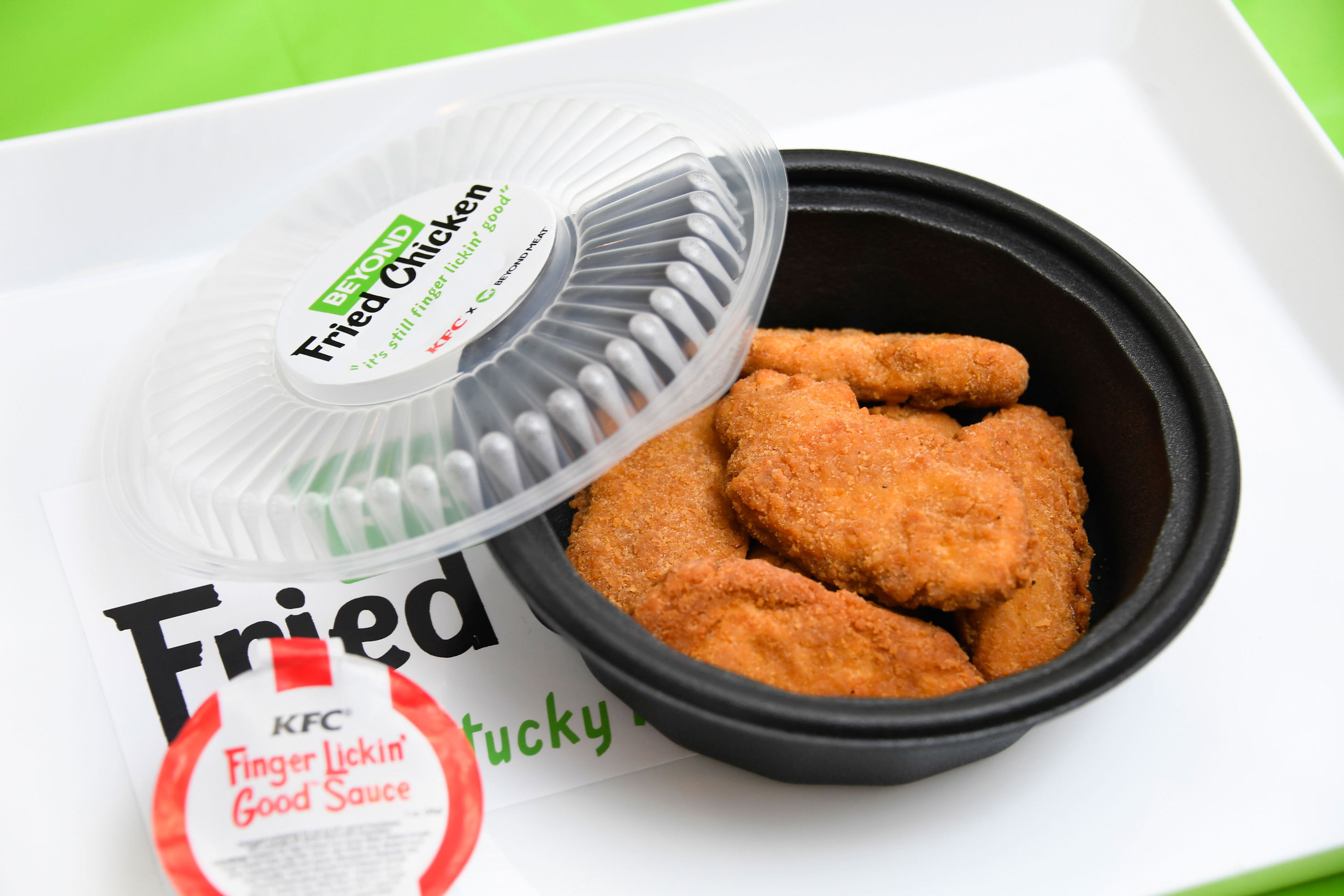 The launch of the Beyond Chicken Tenders with foodservice providers isn’t the first time that a Beyond Meat vegan chicken product appeared on a restaurant menu. In August 2019, Beyond Meat parterend with chicken giant KFC for a one-day, limited launch of Beyond Fried Chicken at one location in Atlanta. There, KFC offered two styles of Beyond Fried Chicken: as nuggets served with a choice of dipping sauce and as boneless wings tossed in a choice of three sauces.

Decked out in all green signage for the launch, the KFC in Atlanta opened to lines at the door that spanned two city blocks and cars that sat bumper-to-bumper at the drive-through. The Atlanta KFC sold out of Beyond Meat’s vegan chicken in less than five hours.

In Canada, KFC partnered with Lightlife to test a fully vegan Plant-Based Fried Chicken Sandwich and vegan popcorn chicken (fried separately from meat) at one restaurant in Mississauga, ON in November 2019. After selling a month’s worth of vegan chicken in one day, KFC Canada expanded the sandwich to all of its locations in August 2020.

KFC offers vegan chicken in several countries outside of North America, including in the United Kingdom. There, KFC tested what it called “The Imposter” vegan chicken sandwich at select outposts in June 2019. This test was also a sell-out success, with KFC selling out of the vegan chicken burgers in four days. In January 2020, KFC UK added the renamed Vegan Burger, made with a Quorn patty, to all of its 900 locations in the UK. By the end of January, KFC UK sold one million Vegan Burgers, the equivalent of selling one vegan burger every three seconds.