India has an extraordinarily rich culinary heritage with recipes that go back hundreds of years. With its 28 states and eight union territories, each region brings something to the table. However, as diverse as Indian food may be, there are many dishes that are commonly made throughout the country, all crafted with a family’s unique spin to make something familiar taste truly original and inviting. We’re not going to attempt a deep dive into Indian food (because that would require an encyclopedia or two), but we will break down the essentials. Follow this guide when you’re eating Indian food anywhere—even in India—so you know exactly what to ask for to ensure your meal is vegan. For the sake of convenience, we’re classifying the food from India into four different regions they originate from: North, South, West, and East. Remember that within these regions there may be variations, but with this guide you will be able to maneuver your way through the labyrinth of popular Indian cuisine.

India is a great place for vegetarians, as it’s highly populated with individuals who abstain from meat. Some surveys go so far as to claim that 30 percent of the population follow a vegetarian diet. 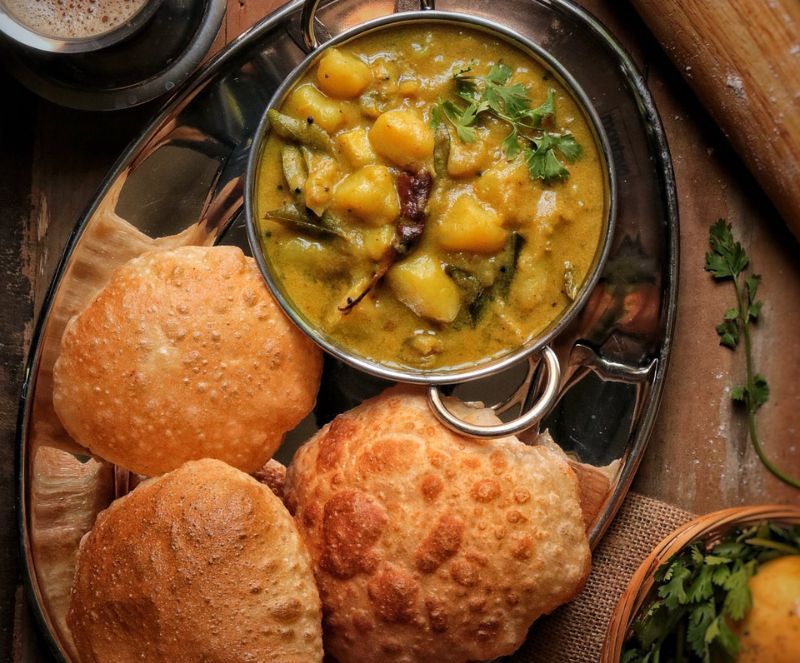 While up to a third of the residents don’t eat meat, dairy is quite common in many traditional Indian diets. This abundant use of dairy is a fairly recent phenomenon—for centuries, it was unattainable for most people due to its high cost. Spices are also an essential part of the culinary culture—they’re essential to the distinctive flavor of Indian food. It’s not uncommon to enjoy a dish crafted with 15 or more spices at a time! While spices like turmeric, cumin, and chilies are used throughout India, the way they are used differ according to the region the dish originates from. Here is your primer broken down by these regions.

The landscape of North India spans hilly holiday destinations that are part of the Indian Himalayas, the grassy fertile plains of rivers, and the Thar Desert.

The food that comes from this diverse area echoes these various climatic sentiments. North Indian savory food uses more warming spices like cumin and cinnamon and depends on fresh green chilies to add quite a bit of heat.

This kind of food also has a reputation for being very heavy on dairy (especially cottage cheese—called paneer and cream), eggs, and even meat. Despite this animal-based ingredient dependence, it’s not off the table for vegan eaters—you just have to know what to order.

Staple North Indian vegan dishes include flatbreads or rotis either roasted on the pan or fried into puffy pooris made from wheat flour served with a side of a legume-based gravy made with chickpeas, kidney beans, black gram, or pigeon peas and a dry vegetable dish like pan-fried spiced potatoes (aloo) or okra (bhindi).

Many times, the rotis are turned into parathas which are usually stuffed flatbreads, among them aloo paratha being the most popular. While butter or clarified butter (ghee) is commonly used to cook the parathas, any vegetable oil can be easily substituted in its place.

Among the other grains in use, rice gets a flavourful kick with spices and vegetables in the form of a pulav. 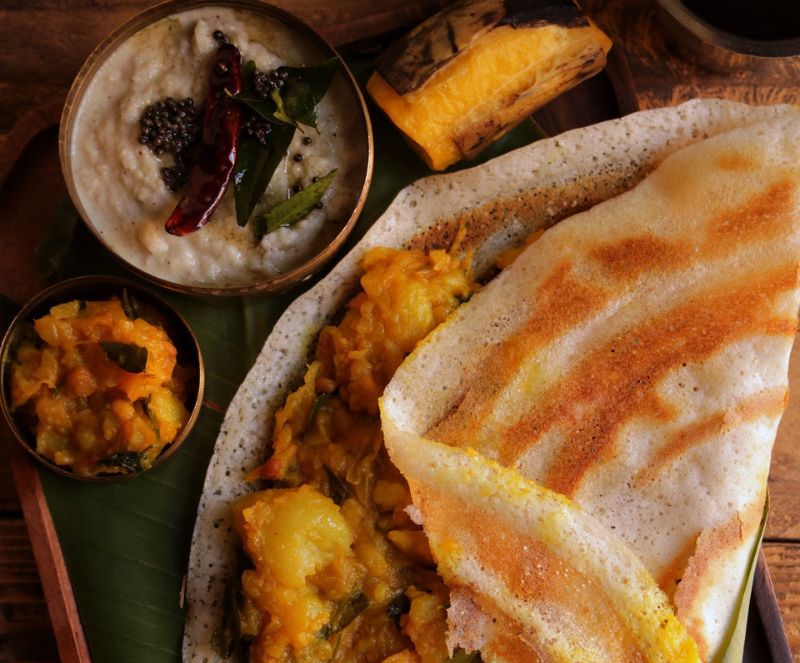 Chickpeas are used in chole and kidney beans make up rajma—both staple dishes every North Indian home cook makes at least once a week. Simmered with a base of tomatoes and onions with loads of spices, both are usually prepared vegan, even in restaurants. Dal is a popular side that is eaten with rotis as well as rice almost all over India in various forms. Made from split legumes, dals from North India are usually yellow-colored and mildly spiced gravies that are used as dips for rotis and parathas.

The dry vegetable-based sides are where anyone who wants to eat vegan can easily find something to pick from. Popular sides include one made with potato and peas (aloo matar) which is sometimes made dry or sometimes with a tomato-based gravy, spiced okra (bhindi masala), and roasted vegetables in pickling spices (achari sabzi). Any one of these flavorful dishes served with rice or roti is more than enough for a satisfying plant-based meal.

These are just a few of the many vegan dishes one can find in North Indian cuisine. Note: within the scope of North Indian cuisine, many sub-cuisines like Kashmiri, Sindhi, Himachali, and Rajasthani also feature traditional vegetable-based dishes that are easy to veganize if not already vegan.

The south of India consists of mainly flat land with a few hilly ranges but has an abundant tropical coastline. This means that coconuts feature quite heavily in many of its cuisines since they are grown there. These tropical fruits are most often used to give vegetable-based dishes their distinctive and craveable creaminess. To contrast this creamy texture, pepper and red chilies are the most commonly used spices in South India. 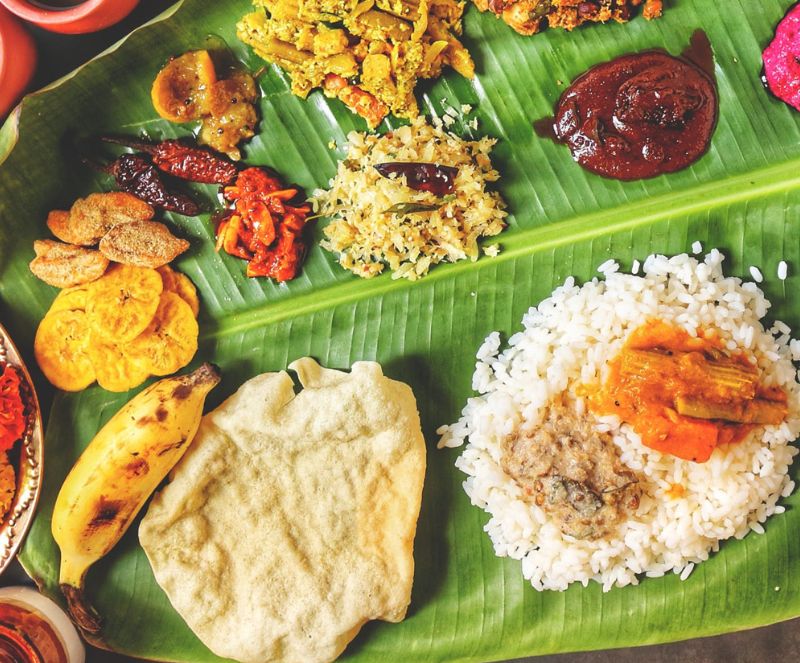 Rice dominates in this region, making its way into fermented batters and even noodles (sevai/idiyappam). Pillowy soft rice cakes (idlis) stuffed with lentils and savory breakfast crepes (dosas) are two popular morning meals, both typically served with a slightly spicy coconut chutney. Craving more? Crispy deep-fried savory lentil donuts (vadas); a soft porridge made from broken wheat and vegetables (upma); and a flavored rice of tamarind, spices, vegetables, and lentils (sambar) are among the other vegan-friendly dishes. Dairy in the form of yogurt abounds in the cuisine here, but generally speaking, South Indian cuisine is generally the most vegan-friendly of the regions.

The cuisine from this part of India has been influenced equally by the North and South but brings its own depth of flavors. Much like the South, the West of India finds itself influenced by its ample coastline. While fresh coconuts are commonly used in many vegetable dishes that originated closer to the coast, the mainland prefers to use peanuts instead. Also pulling from the South, rice is also extremely prevalent in the cuisine of the West, but wheat has made its inroads here as well.

An everyday meal in West India will consist of dry vegetable dishes known as sabzi or shaak, plain or flavored rice, thin flatbreads made with different grains called roti, phulka, or bhakri; and daal made from different lentils. All of these are generally vegan.

Sprouts are also a common feature and are served as delicious gravies (missal, usal) with a side of local Indian bread (pav).

Cuisine from the East is a mixed bag of sorts with Indian flavors but also some influences from neighboring countries.

Mustard oil is the primary oil used here and provides a pungent flavor to everything it touches.

While this cuisine is not as vegan-friendly as the rest of the country, there are still many traditionally made vegetable dishes that are naturally vegan. 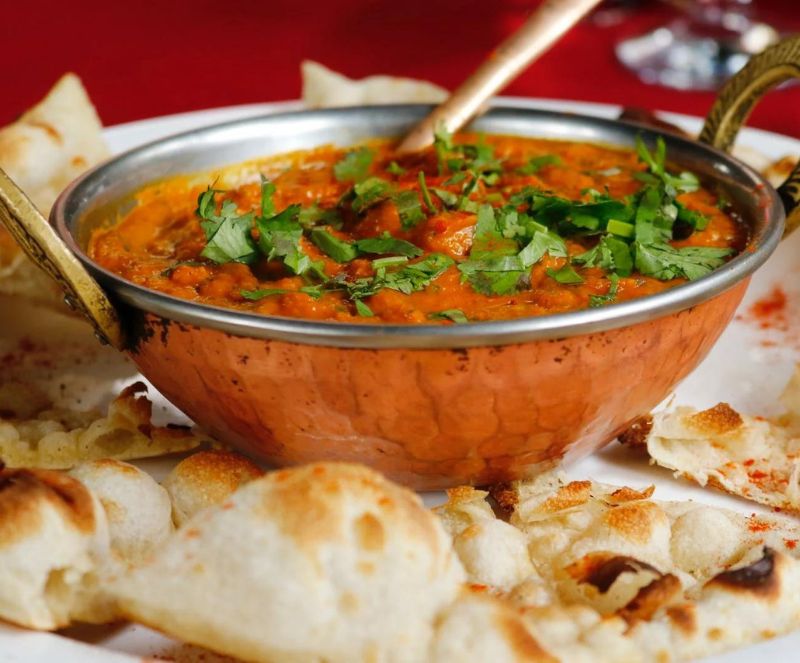 In Bengali cuisine, dry sabzis are roasted in mustard oil with a special five spice mix. Rice and wheat-based rotis are also staples here as well as vegan-friendly dals.

As you venture further east, Southeast Asian influences start to pop up with dishes like steamed dumplings called momos and even pickles made with bamboo shoots and an Indian version of tempeh or natto called axone.

Perhaps the hardest thing to find vegan in Indian cuisine is dessert. Desserts are usually seen as an indulgence and, as a result, dairy finds itself creeping into almost every dessert in India. There may be some traditional desserts that have escaped the intrusion, but those are generally a rare find.

Snacks, however, are plentiful when it comes to vegan options, and Indians love their snacks. These savory treats are often deep-fried to produce that craveable crunch factor. From samosas and chalkis to banana chips and stuffed balls of wheat flour (kachori), you can find vegan-friendly snacks across the country. 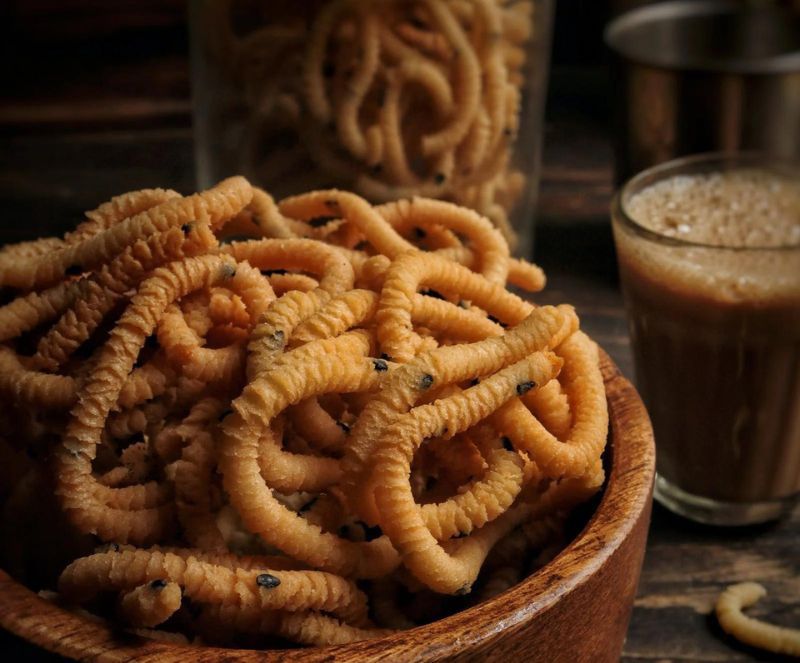 Pro tip when eating out: while these foods are naturally vegan, it’s better to confirm and state that you don’t eat dairy. Say you’re allergic—it’s the most straightforward way to ensure the kitchen doesn’t use dairy when preparing your food.

If you’ve read this and wondered “What about curry?” … here’s a fun fact: the word ‘curry’ is a misnomer used to describe all Indian gravies; it is not used as generically in India at all.

Rithika Ramesh is a writer and a mom from Mumbai, India.