In May 2021, coffee chain Starbucks launched Oatly oat milk across the US to much fanfare, debuting two new iced beverages made with the non-dairy milk. As temperatures rise, we’re swapping our hot Oatly vanilla lattes for some caffeine on ice. From no-fuss nitro to the beloved Pink Drink, here is your essential vegan guide to summer Starbucks sips.

Sadly, if you’re in the US, you’ll still get charged extra for plant-based milk (we’re shaking our fists at you, Starbucks UK, but only because we’re jealous). But, know that both Clueless star Alicia Silverstone and Paul McCartney have asked the Starbucks to drop the vegan milk tax. We’re optimistically looking for a future where plant-based milk is the default, not a pricier option. 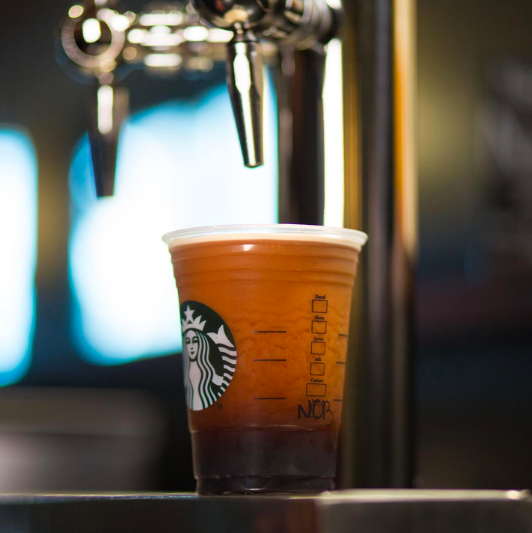 In terms of coffee’s centuries-old history, nitro cold brew is a baby. This smooth drink entered the scene via third-wave coffee culture in the 2010s. At first glance, the thick layer of foam that floats atop this unadorned chilled coffee may look like cream, but it’s not—it’s crema, and there’s a big difference. Crema is the CO2-infused froth that is produced when coffee oils emulsify with water under intense pressure. In Starbucks’ case, it’s also produced when nitrogen is added to cold brew. The result is an unbelievably smooth, ever-so-slightly sweet, ice-cold coffee unadulterated without sugar or cream. Even those who say they can’t drink coffee black may enjoy this beverage—no creamer or Stevia required.

The regular cold brew coffee is also vegan and smooth enough to drink without dairy-free milk.

Barista tip: Steer clear of the nitro cold brews that come with Sweet Cream or Salted Honey Cold Foam. Those actually do contain dairy and other animal products.

Iced coffee is the quintessential caffeinated summer drink. In contrast to cold brew, which is made from ground coffee steeped for up to 24 hours and lattes, which are espresso with steamed milk, an iced coffee is brewed hot, then chilled. Get it with your non-dairy milk of choice and enjoy!

Barista tip: If you find iced coffee bitter, ask for a shot of syrup—see here for a full list of vegan flavored syrups at Starbucks.

An Americano is made from espresso diluted with water. Urban legend has it that the Americado was invented during World War II, when American GIs in Italy weren’t used to the taste of straight espresso, so they were served it made with hot water to.

An iced latte is made with cold milk, so it doesn’t have the signature foamy topping of a regular latte. However, if you’re looking for a drink that will catapult you through the afternoon slump and goes down easy, an iced latte will certainly do the trick. As with iced coffee, you can add whatever syrup you like to it—just stay away from the caramel sauce (the syrup is fine, the sauce contains dairy. Confusing, we know). Just swap the cows’ milk for your favorite non-dairy alternative.

Barista tip: Still want the creaminess but with more espresso flavor? Ask for a long shot. This type of shot is pulled with more water and ends up roughly double in volume than a traditional shot. The result is a less milky but still creamy beverage that actually tastes like coffee.

While we’ve already gone over the latte category, this one deserves special attention as it is not vegan by default. This menu item comes with whipped cream and cinnamon dolce topping—both of which contain dairy. Veganize this sweet, cinnamony beverage by asking for non-dairy milk, no whip, and substitute a sprinkle of nutmeg instead of the Cinnamon Dolce Topping.

Barista tip: Ask for light ice, so you get more of the good stuff and prevent a sad, watered-down beverage. 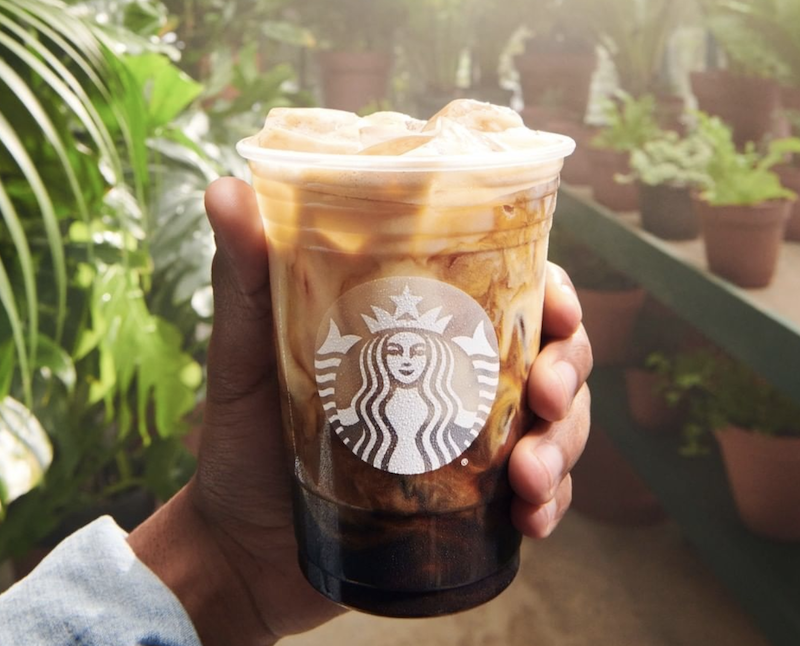 When mixology combines with coffee, you get a shaken espresso. Launched in March 2021, this vegan-as-is espresso beverage is made with Starbucks’ Blonde espresso that’s mixed with ice in a plastic cocktail shaker.

Barista tip: If the taste of espresso is too strong for your palate, order it with non-dairy milk or pick one of the sweeter varieties listed right below.

This chocolatey drink combines vegan malt powder and almond milk for a lightly sweet, refreshing source of caffeine to power you through your day.

Barista tip: This drink actually isn’t cloyingly sweet, but if you want to taste the espresso, ask for a long shot.

Barista tip: Hack your way to this beverage even when oat milk is out of stock. Ask for a Shaken Iced Espresso with two pumps of Brown Sugar syrup and almond milk (the soy will be overly sweet).

New to the menu as of March 2022, this tastes like a toasted marshmallow in drink form. The brûlée-esque notes of the toasted vanilla syrup dominate the drink, so if you don’t like the taste of coffee, but need the caffeine, then this drink is for you.

A flat white is a drink that hails from 1980s Australia that’s made from espresso and steamed milk. So, what makes it different from cappuccinos and lattes? It’s all about the milk. A cappuccino is smaller than a latte and contains equal parts espresso, steamed, and frothed milk. A latte is about two-thirds steamed milk with a thin layer of foam on top. Flat whites, meanwhile, have a stronger coffee flavor, have a velvety texture, and very little foam. However, when it comes to iced options that don’t involve steaming, the difference is less noticeable. Order an iced flat white for a slightly less milky version of a latte.

Barista tip: You’re looking at a 60-cent upcharge if you opt for an iced flat white over an iced latte. You’ve been warned.

It’s caffeinated chocolate milk—what’s not to love? Swap in your favorite non-dairy milk and ask for no whip.

Barista tip: Ask for one less pump of mocha sauce and add one pump of hazelnut, peppermint, or raspberry syrup (for a tall) to experience a tasty twist.

After the unprecedented popularity of the Pink Drink, Starbucks leaned into this color scheme. The classic Pink Drink is a creamy energy beverage containing coconut milk, Strawberry Açaí Refreshers Base, and freeze-dried strawberries shaken with ice. The Dragon drink is an equally vibrant caffeinated beverage made with coconut milk, Mango Dragonfruit Refresher Base (mango and dragonfruit-flavored liquid spiked with green coffee), and freeze-dried dragonfruit pieces shaken over ice. The Purple Drink isn’t officially on the menu, but it follows the same format as the Pink and Dragon Drinks. Simply ask your barista for an iced Passion Tango Tea with vanilla syrup and non-dairy milk. Add freeze-dried strawberries for a fruitier drink.

Barista tip: The Dragon Drink does not actually contain mango—the base is mostly white grape juice concentrate with natural (but vegan-friendly) flavors. 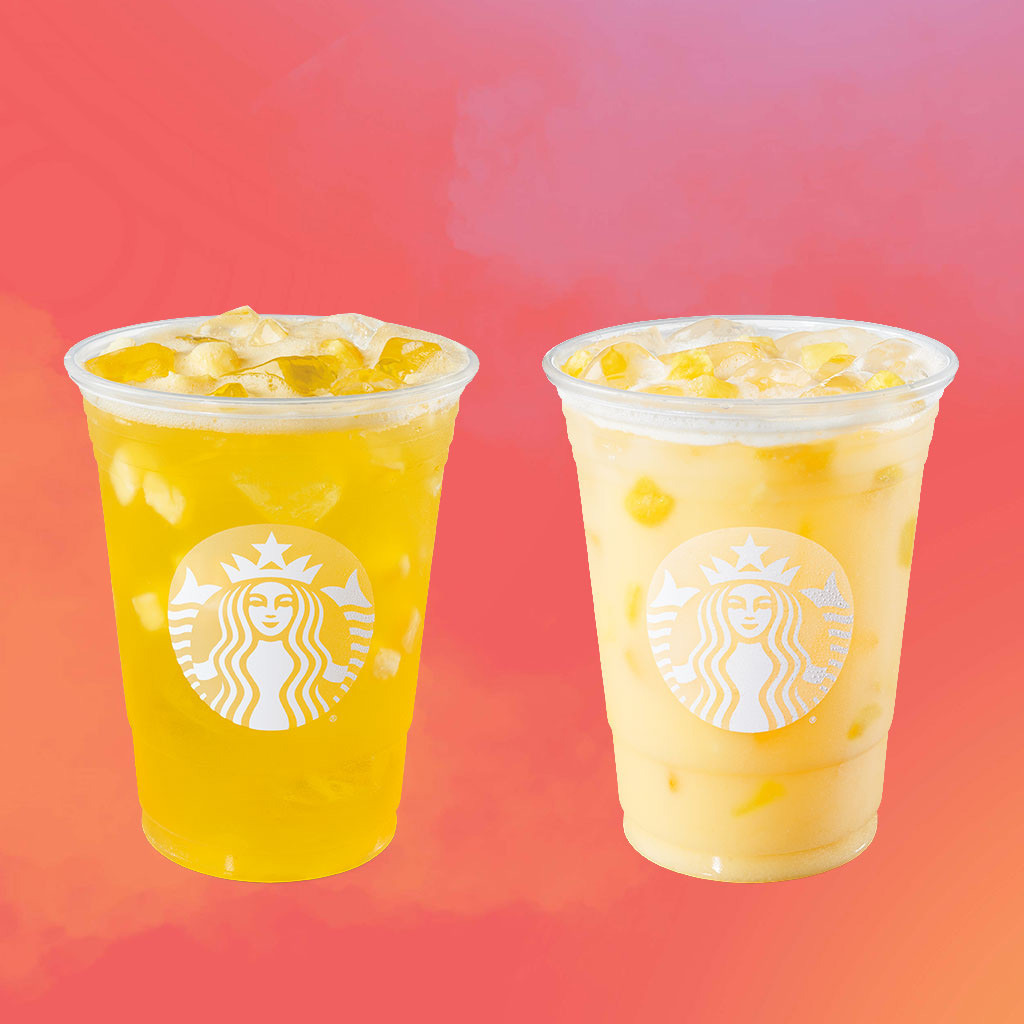 The Paradise Drink is a beverage that could easily pass for a mocktail. It features a dairy-free coconut milk base mixed with pineapple and passionfruit juices with pieces of diced pineapple for an extra burst of tropical flavor.

Barista tip: If you don’t want to double up on pineapple, ask your barista to swap it with freeze-dried strawberries or dragonfruit pieces.

These fruity drinks don’t contain coffee, but they’ll definitely keep you alert. Each beverage contains 35 milligrams of caffeine (in a tall), which is about one-third the amount in a cup of coffee. They’re made with a flavored Refresher base shaken with ice and freeze-dried fruit. Choose from Mango Dragonfruit, Mango Dragonfruit Lemonade, and Strawberry Açaí.

For summer 2022, the new Pineapple Passionfruit flavor has joined the permanent menu. The chilled, shaken drink was inspired by popsicles and includes real bits of diced pineapple.

Barista tip: You can pair any Refresher with lemonade for a subtle hint of sweet summertime pucker.

Starbucks can put any tea on ice, but it also has a full menu of teas specifically designed to keep you cool. Choose from black, white, herbal, or green varieties (including matcha). Any tea can be transformed into a tea latte by asking for non-dairy milk, though the menu currently features Matcha, London Fog, and English Breakfast tea lattes. Sadly, the Chai Tea Latte is not vegan because it contains honey.

Barista tip: You can ask for any iced tea with lemonade for a custom Arnold Palmer. Particularly perfect lemonade pairings include Matcha, Passion Tango, Black, and Peach.

No summer is complete without these chilly, milkshake-like coffee drinks. Just remember to ask for non-dairy milk and no whip! It’s split into two categories: Coffee and Crème (the latter is caffeine-free). Vegan-friendly Coffee options include Mocha Cookie Crumble (without the Frappuccino Chips), Espresso, Caffè Vanilla, Caramel (without the caramel sauce), Coffee, and Mocha.

Crème options include Chocolate Cookie Crumble (without the Frappuccino Chips), Strawberry, Vanilla Bean, and Matcha. There’s also the Blended Strawberry Lemonade, which is vegan-friendly and made with the Crème Frappuccino Syrup.

Starbucks can put any tea on ice, but is also has a full menu of teas specifically designed to keep you cool. Choose from black, white, herbal, or green varieties (including matcha). The green tea lemonade happens to be Lizzo’s go-to drink! You can also order plain lemonade, which we love with a pump of Strawberry Puree Sauce.

Barista tip: You can ask for any iced tea with lemonade for a custom Arnold Palmer. Particularly perfect lemonade pairings include Matcha, Passion Tango, Black, and Peach.

Don’t see your favorite hot beverage in an iced form? Just ask. The Starbucks baristas have the power to ice anything. Always remember to substitute non-dairy milk for the standard two percent cows’ milk, hold the whipped cream, and stay away from the Java Chips, Frappuccino Chips, Cinnamon Dolce Topping, White Chocolate Mocha Sauce, and Caramel Sauce. Follow these rules, and you’re virtually in the clear. Here’s to a cool summer.

In addition to an extensive vegan-friendly cafe menu, the world’s biggest coffeehouse chain also has several grab-and-go drink options that are free from dairy and honey. 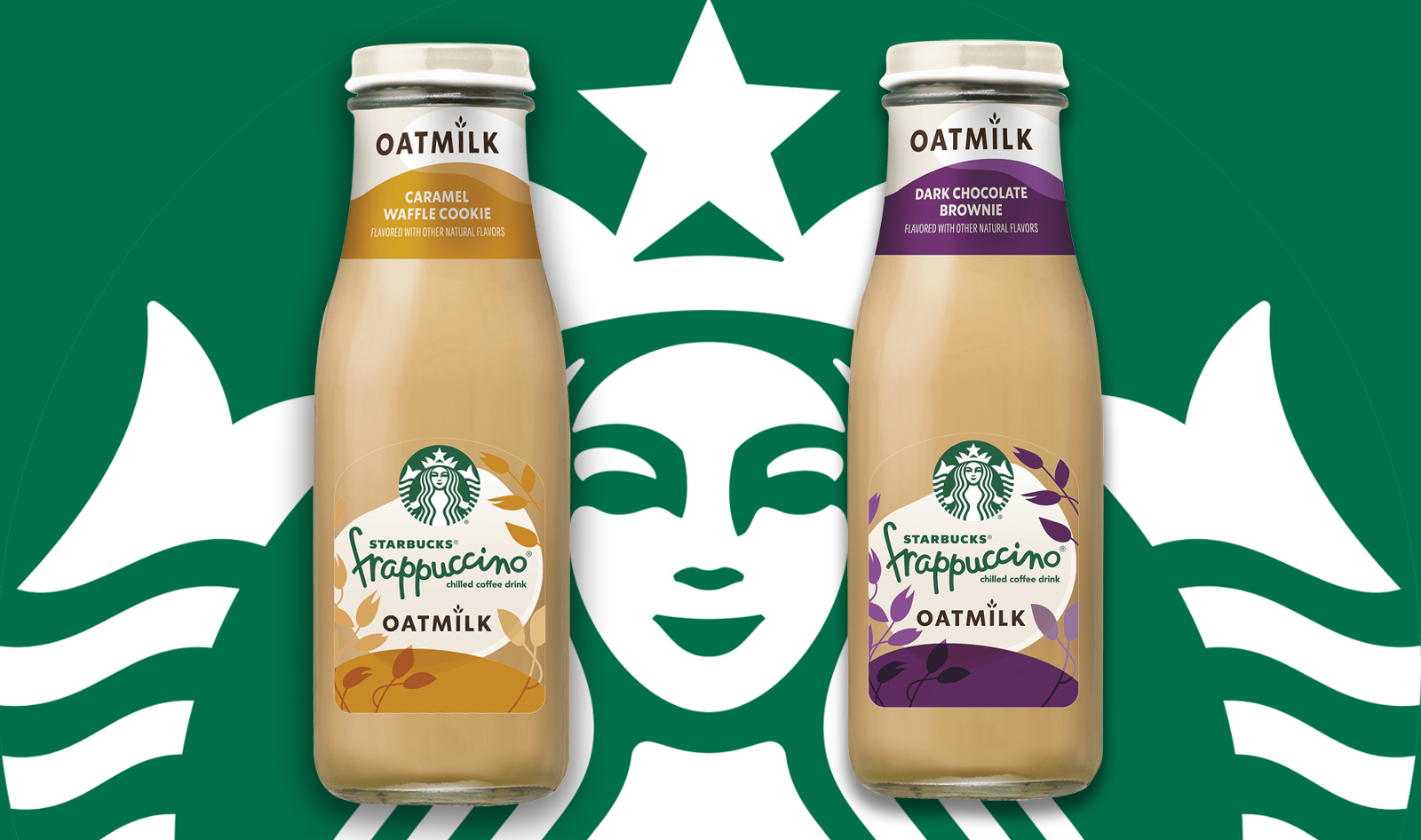 Starbucks launched its first dairy-free bottled Frappuccinos back in early 2019 in two flavors, vanilla and mocha, made with almond milk. These appear to be discontinued, but fear not: in early 2022, Starbucks rolled out oat milk Frappuccinos in two dessert-y flavors: Caramel Waffle Cookie and Dark Chocolate Brownie.

Perfect for making iced coffee at home, Starbucks’ non-dairy creamer is made from a blend of almond and oat milk. It’s currently available in two flavors: Caramel Macchiato and Hazelnut.