Whether you need to eat in a rush, have screaming kids in the backseat, or you’re just having cravings, fast food serves its purpose. Now that vegan products have integrated into so many chains, it’s easy to pop by nearly any drive-thru window and find something to fill you up. Don’t hold up the line scanning the menu—rely on this guide to order with confidence at nine of your favorite fast-food restaurants in the US.

But first, let’s take a look at what vegan fast food actually is, as well as the benefits of choosing plant-based next time you order a quick feast to-go.

What is vegan fast food?

For decades, meat and dairy has dominated fast-food menus. With the exception of fries and soda, pretty much everything else has always included animal products. (In some places, like McDonald’s, even the fries aren’t vegan.)

But recently, that has all started to change. Fast-food chains like Burger King, KFC, and White Castle have teamed up with plant-based meat brands to create new vegan fast-food options. These items closely resemble their meaty counterparts, only the beefy patties or chicken strips are made with plant-based meat instead of conventional meat.

But meat alternatives aren’t essential. You can also get options like salad bowls, burritos, or tacos, all of which still count as fast food, but may only include plant-based ingredients like beans and other vegetables.

How healthy your vegan fast food meal is depends on the ingredients. A burrito bowl packed with beans and vegetables, for example, is always going to be far more nutritious than a burger and fries. But if you’re eating the latter, it’s likely you’re not choosing it for health reasons, and that’s more than ok (not every meal is about health, after all).

That said, a vegan burger and fries is still likely to be better for you than its animal-based counterpart. Processed meat is linked with a higher risk of heart disease, and it’s been classified as a carcinogen by the World Health Organization.

On the other hand, research has suggested that plant-based meat is healthier for us and the planet. One review published earlier this year examined 43 studies relating to plant-based foods and concluded that they were better in terms of human health and the environment than their animal-based counterparts.

Where can you get vegan fast food?

While there is still progress to be made (McDonald’s is seriously lagging behind in terms of plant-based options in the US), the vegan fast-food market is growing.

According to one report, it could even hit a value of more than $40 billion by 2028. This means it’s easier than it has ever been to find vegan options in the nation’s favorite fast-food chains.

If you’ve got cravings to satisfy, we’ve rounded up our top hacks for ordering vegan in fast-food outlets everywhere, from Del Taco to Auntie Anne’s Pretzels. 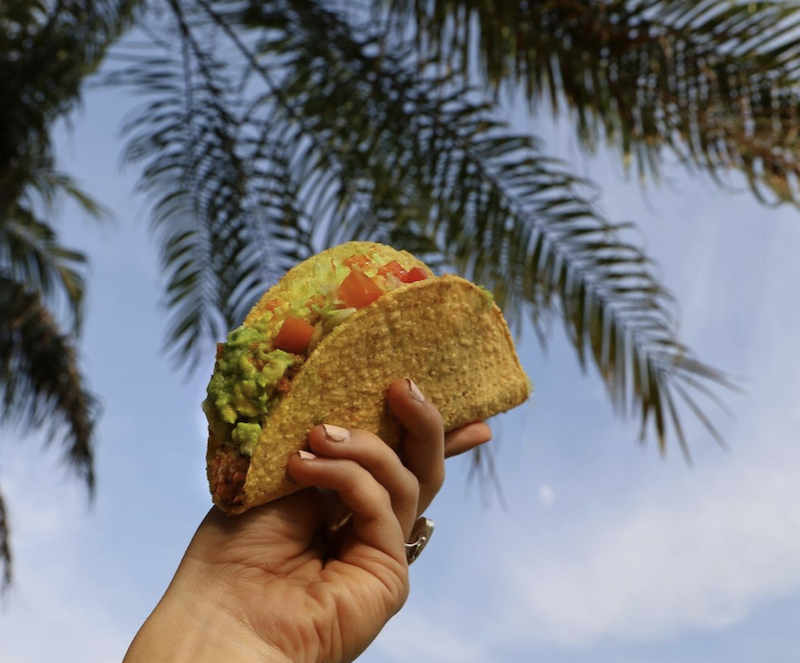 No modifications needed; Del Taco has partnered with Beyond Meat to create a designated vegetarian and vegan menu. The new one-pound Epic Beyond Fresh Guacamole Burrito is vegan as-is, along with the Beyond Guacamole Taco. Both feature seasoned Beyond Beef crumbles that are accompanied by an assortment of fillings including cilantro-lime rice, fresh guacamole, pico de gallo, salsa, and seasoned black beans. The Beyond Taco is also vegan if you order it without the cheese. The Crinkle Cut Fries, Hash Brown Sticks, and Veggie Bowl are also vegan-approved.
Learn more here 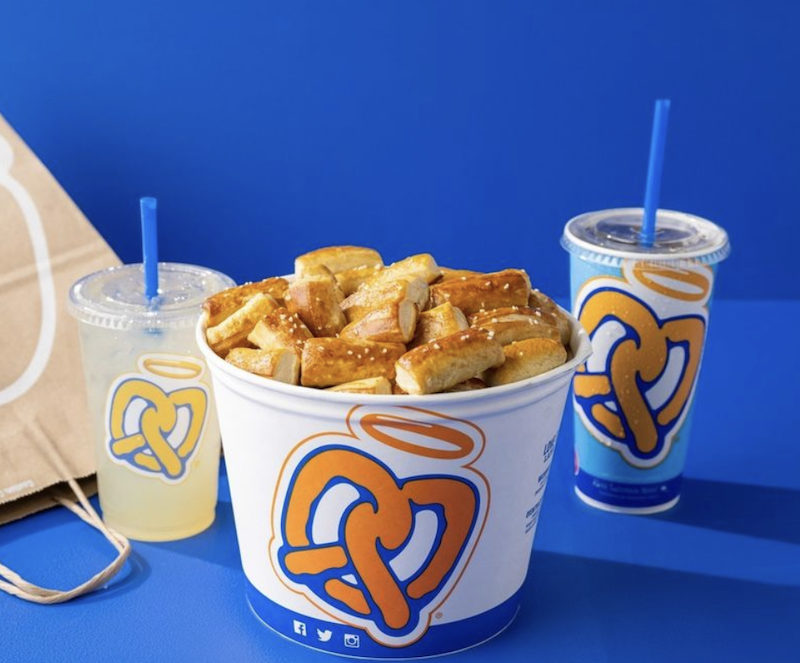 Little-known vegan fast-food fact: Auntie Anne’s Original, Cinnamon Sugar, Sweet Almond, Jalapeño, and Raisin pretzels can be veganized by ordering them without the butter. This process takes an extra five minutes, but it’s worth it for a hot, soft mall pretzel.
Learn more here 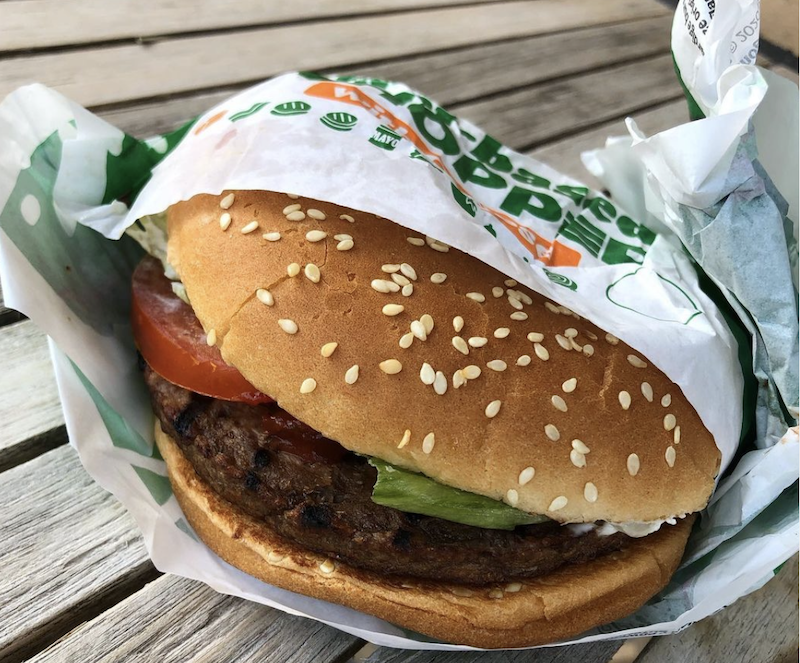 Breakfast, lunch, or dinner—Burger King has the vegan options covered. In the morning, opt for the French Toast Sticks served warm with a side of maple syrup. During the day, quell your burger craving with the Impossible Whopper (ask for no mayo) and a side of fries, then polish off that sweets craving with Mott’s Applesauce. For a comprehensive look at BK’s menu, check out our Vegan Guide to Eating Plant-Based at Burger King.
Learn more here 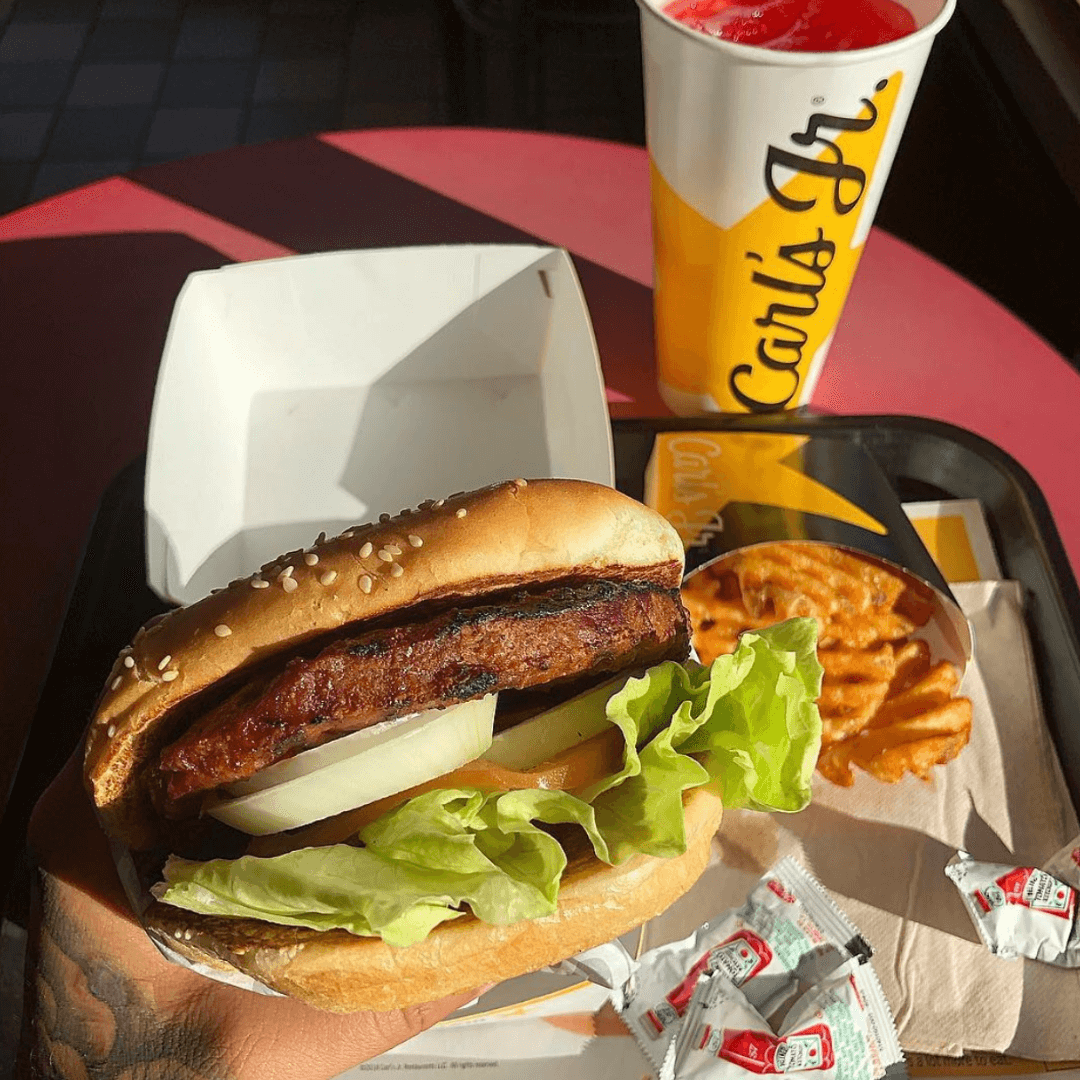 Get your Famous Star fix with the Beyond Famous Star burger made with Beyond Meat. Ask for no mayo or cheese and you’re set.  Another handy hack: customization. Order a plain hamburger with a Beyond Meat patty, then add your choice of toppings: raw onions, ketchup, mustard, pickles, barbecue sauce, jalapeños, tomatoes, and lettuce are all fair game. Accompany the sandwich with a crispy fried potato side—the French fries, CrissCut fries, and hash rounds are all vegan. Unfortunately, this vegan-friendly option has been phased out in Southern and Midwestern locations, where the chain is known as Hardee’s.
Learn more here 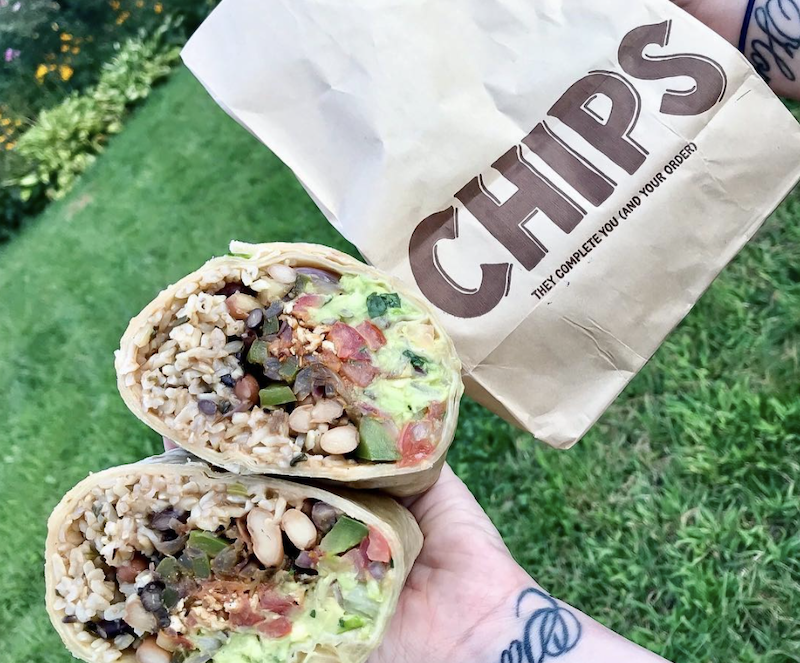 There are countless build-your-own options with Chipotle’s offerings! You can customize your own bowl, burrito, salad, or tacos with a plethora of vegan ingredients—including beans, lettuce, cilantro-lime rice, veggie fajitas, and fan-favorite Sofritas—the chain’s signature spicy braised tofu. When in doubt, rely on Chipotle, and keep our vegan guide to Chipotle handy when you open your mobile ordering app.
Learn more here 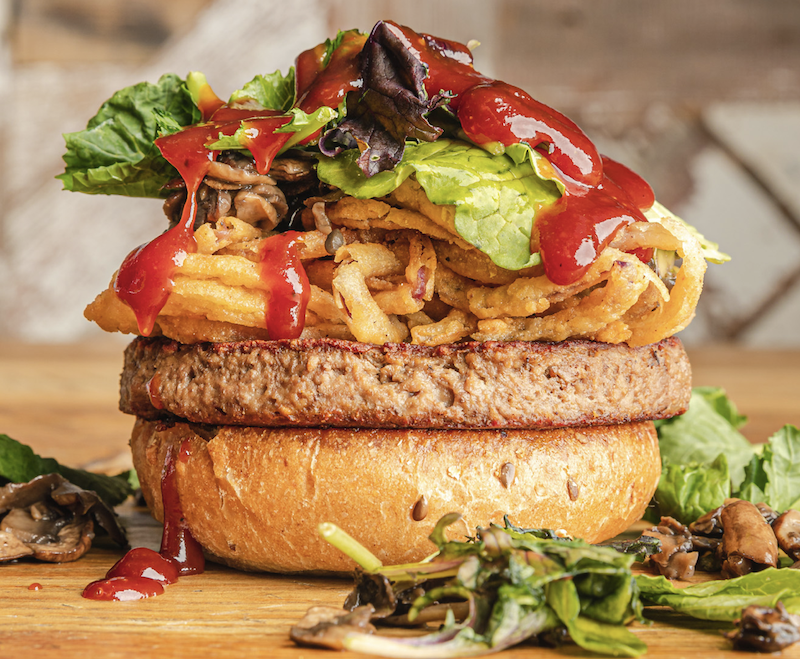 This chain has seriously stepped up its vegan game in recent years. What began as a partnership between Beyond Meat and Impossible Foods sprouted into a fully developed vegan menu—complete with vegan cheese, plant-based buns, non-dairy milkshakes, and vegan fish sandwiches. The menu features sandwiches and sides, nuggets, and even kids’ meals and carrot cake. The most challenging part of ordering at a Bareburger isn’t finding something you can eat, but deciding how much can fit in your stomach.
Learn more here 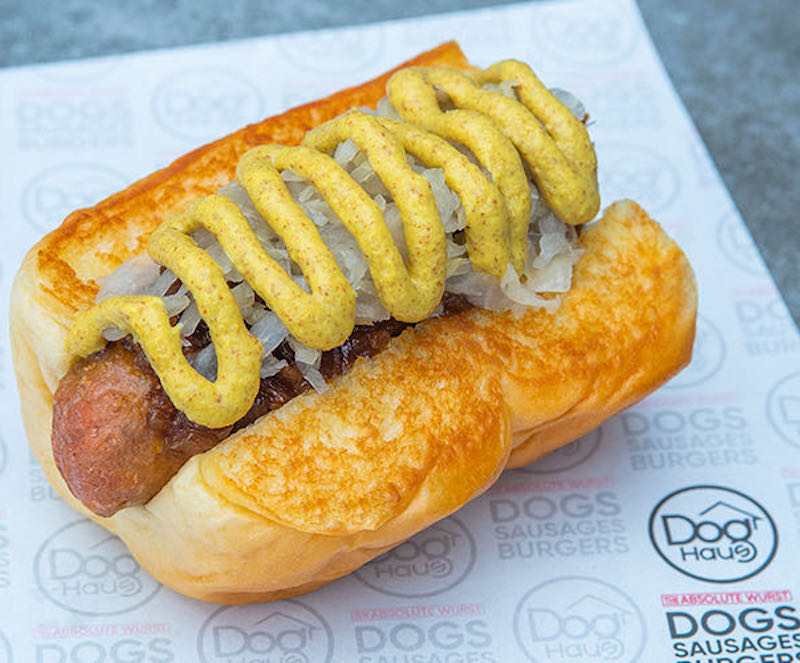 Best known for their hot dogs, this chain offers a selection of plant-based fast-food favorites. Choose between an Impossible Burger (hold the cheese and secret sauce), Beyond Brat, Impossible Slider (ask for no mayo and skip the cheese), and Sooo Veggie dog. When ordered on a French roll or lettuce-wrapped, these options are perfectly vegan-friendly. To keep things fair, the chain also carries chicken nuggets from Beyond and Impossible, available as a side or stuffed inside a sandwich. Dog Haus’ tots, sweet potato fries, and regular fries are also fair game.
Learn more here 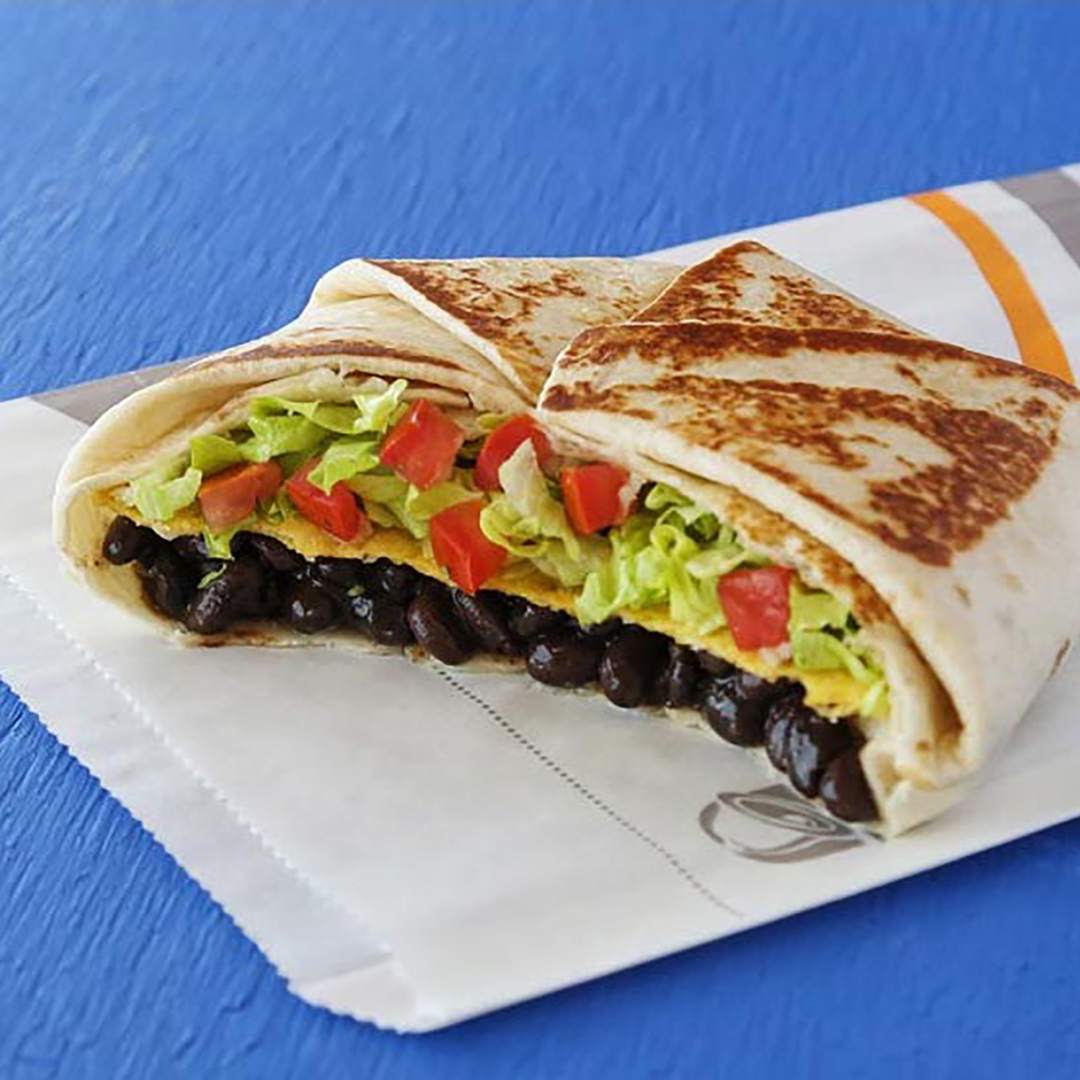 Like its competitor Del Taco, this fast-food Mexican chain was early to jump on the vegan bandwagon. While the chain is currently testing vegan protein options in Alabama, Taco Bell does offer a fairly extensive vegetarian menu that is easily veganizable. Until the Bell’s vegan protein test launch goes nationwide, just use the magic words: “Fresco style.” This phrase replaces the cheese, ranch sauce, sour cream, and essentially any dairy-based condiment with fresh pico de gallo. Add potatoes to customize other vegetarian favorites including the Black Bean Crunchwrap Supreme, Power Menu Bowl-Veggie, and simple Beans and Rice bowl. No matter what you order, grab a side of accidentally vegan Cinnamon Twists for dessert. When in doubt, read our guide to ordering vegan at Taco Bell.
Learn more here 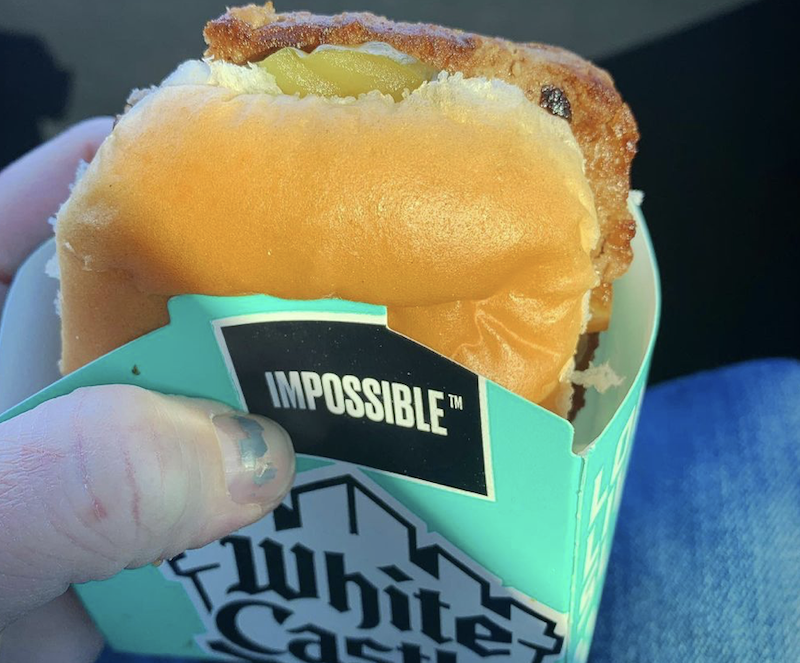 Harold and Kumar approve of White Castle’s vegan sliders made with the Impossible Burger. Order these bite-sized beauties plain or with a sweet Thai sauce, but hold the cheese. The chain started testing out vegan cheese options using GOOD PLANeT cheese in March 2020, but only in select markets for a trial period. Complete your order with a side of fries.
Learn more here

For even more vegan fast-food, read: