Vegan mug cakes ensure you’ll be ready whenever the cake craving calls. If you’ve got a few cupboard staples and a microwave, you’re minutes away from diving into a hot and fluffy sweet treat. And while the technique is the same, there are endless possibilities with a microwave and mug.

What is a mug cake?

A mug cake is a single-serve dessert that can be prepared and microwaved all in one container. It’s the result of the single-serving dessert craze that gained food blogger popularity in the early 2000s and truly picked up steam in 2009 when YouTuber yoyomax12 posted a tutorial on her channel. Today, major bake mix brands such as Ducan Hines, Betty Crocker, and King Arthur all have store-bought mug cake products, though unfortunately, these are not vegan. 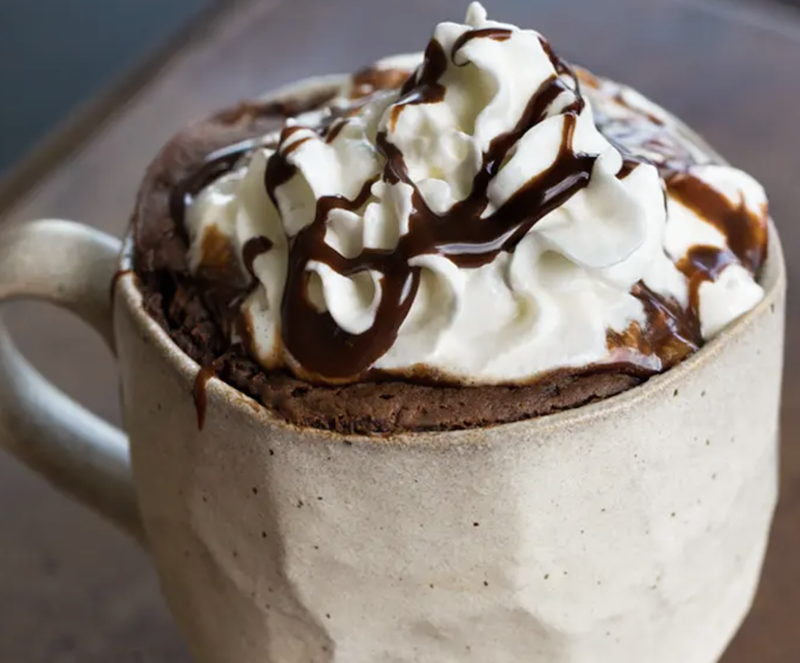 While “just add water and stir” is extremely convenient, it does not take much more effort to make a mug cake from scratch. The basic components resemble that of a vegan cake: flour, sugar, oil, baking powder and/or baking soda, salt, and vanilla. Generally, you mix the dry ingredients in the mug first, add the liquid ingredients, then mix until just combined. Pop that mug in the microwave for approximately 90 seconds, and dessert is done.

Unlike generic boxed baking mixes, store-bought mug cake mixes are typically not vegan. The powdered mixes already contain eggs and dairy—it’s not a question of simply swapping out the egg or milk for a plant-based replacement.

Luckily, there are ways around this hurdle. Vegans, too, can enjoy a spur-of-the-moment mug cake without baking their own. Vegan-friendly baking brands such as Partake and Renewal Mill both offer mug cake recipes on their packaging and website. You’ll need a bit more than water—both call for a fat such as vegan butter or oil—but the rest is contained in the mix.

We’ve also listed out the eight mug makes we’ve been making recently. All take less than five minutes of prep and mere seconds to bake. And yes, frosting is included.

From a fudgy brownie to decadent red velvet cake, here are eight vegan mug cakes you can zip up in a flash. 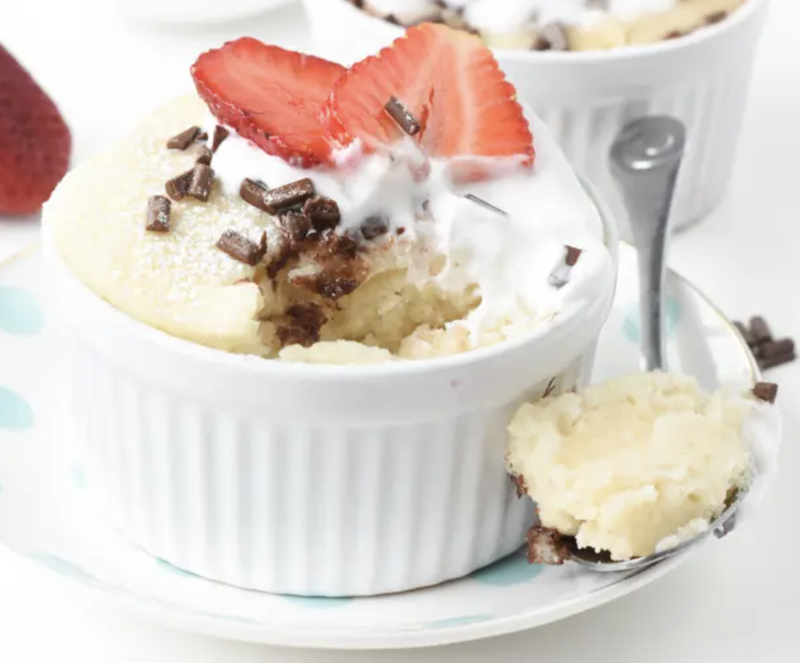 1 Vegan Vanilla Mug Cake No Egg, No Milk by The Conscious Plant Kitchen

With only six ingredients and two minutes to spare, you can make a deliciously vegan vanilla mug cake that rivals many store-bought options. This recipe is light, fluffy, and benefits from a dollop of vegan chocolate hazelnut spread or a swipe of store-bought vegan frosting. Might as well keep a tub on hand—you’ll make this mug cake often.
Get the recipe 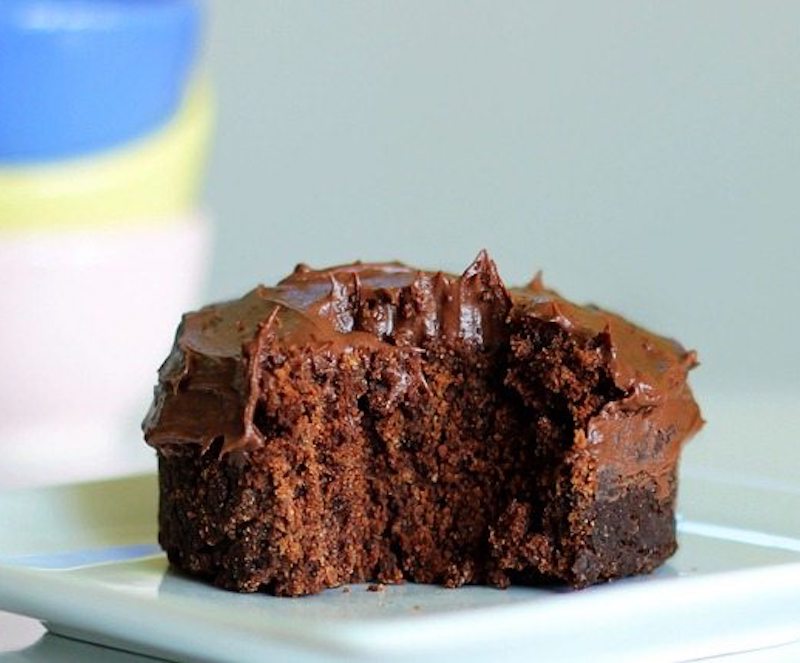 If you root for Team Chocolate, you’ve got to try this cake. Does it taste like a triple-layer fudge cake you order every year for your birthday? No, but it’s a darn good chocolaty treat on any given non-celebratory day of the week. It’s fabulous topped with vegan chocolate hazelnut spread or a thick schmear of chocolate peanut butter powder.
Get the recipE 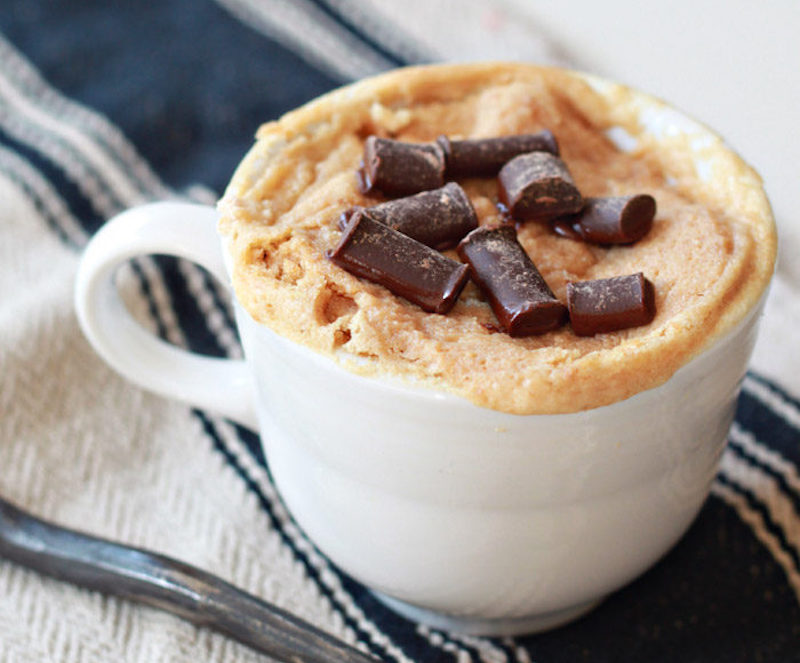 This not-too-sweet peanut butter treat is fantastic on its own, but adding a few vegan chocolate chips to the batter only makes it better. It really doesn’t need any garnish beyond that, but if you choose to gild the lily, a spoonful each of peanut butter and jelly on top will make you do your “I just ate something amazing” happy dance.
Get the recipe 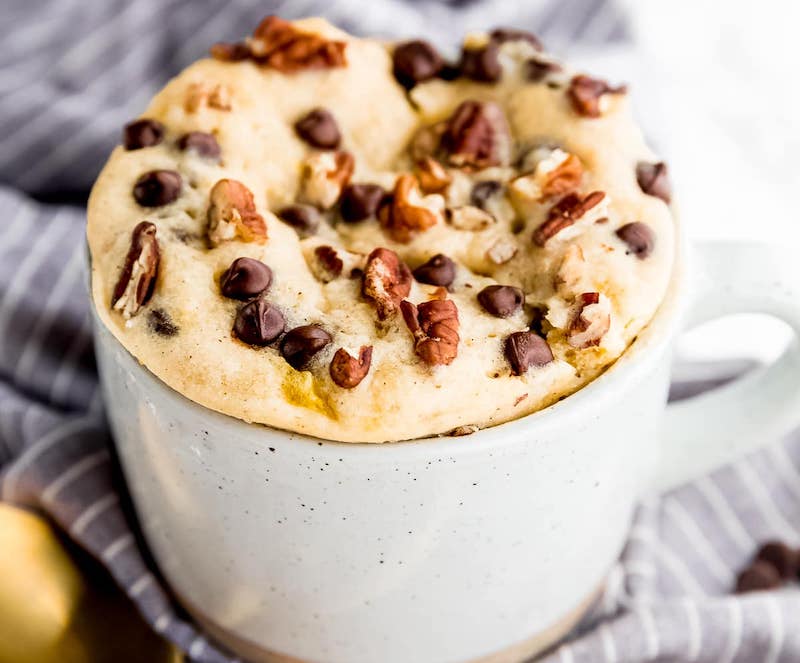 4 Banana Bread Mug Cake (Vegan) by Jessica in the Kitchen

We know, you already have a perfect banana bread recipe, but we can almost guarantee that recipe won’t transfer well to a microwave mug cake application. Plus, sometimes you don’t have three ripe bananas on hand. When you’re down to the last brown banana and don’t want to wait 45 minutes for a full loaf to bake, this vegan banana mug cake saves the day. Enjoy with a scoop of vegan vanilla ice cream plopped right on top.
Get the recipe 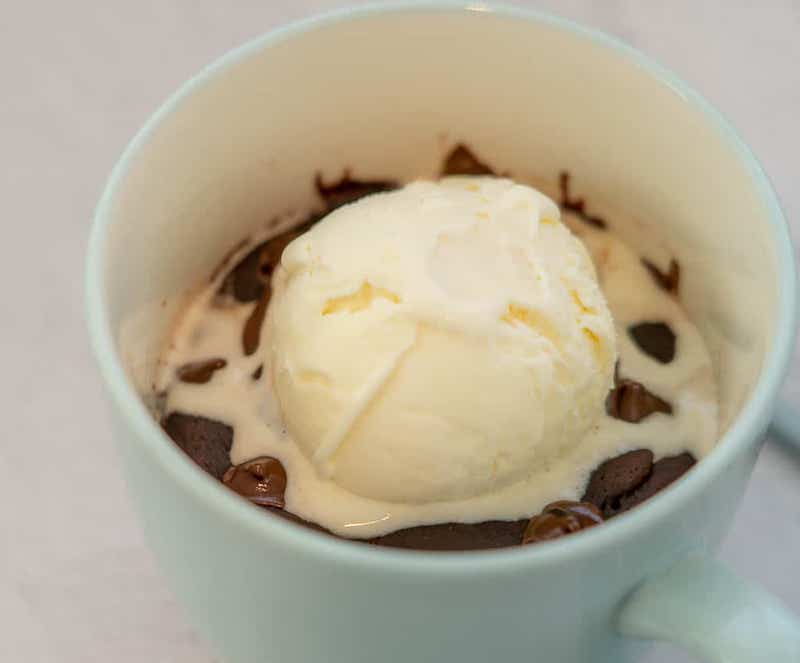 My Kids Lick the Bowl

Boxed brownies are fairly quick, but there’s no beating this two-minute recipe. Made with just five simple ingredients, you can have a hot, gooey brownie whenever you need a chocolate fix. Once you nail the basic recipe, have a bit of fun by adding a handful of vegan chocolate chips, nuts, or even chopped-up vegan peanut butter cups into the batter. Enjoy on its own or with vegan ice cream and a cherry on top.
Get the recipe 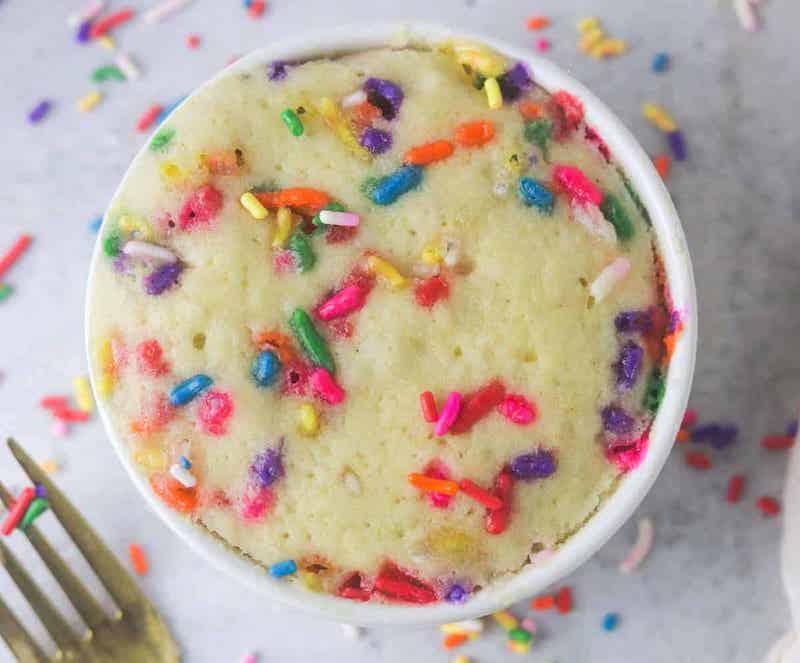 Funfetti isn’t just for birthdays, and it isn’t just for kids. This simplified, two-minute microwaved version makes funfetti accessible to all. Had a stressful day? Funfetti. Completed a home improvement project? Funfetti. It’s a sweet, nostalgic treat to make any day better.
Get the recipe 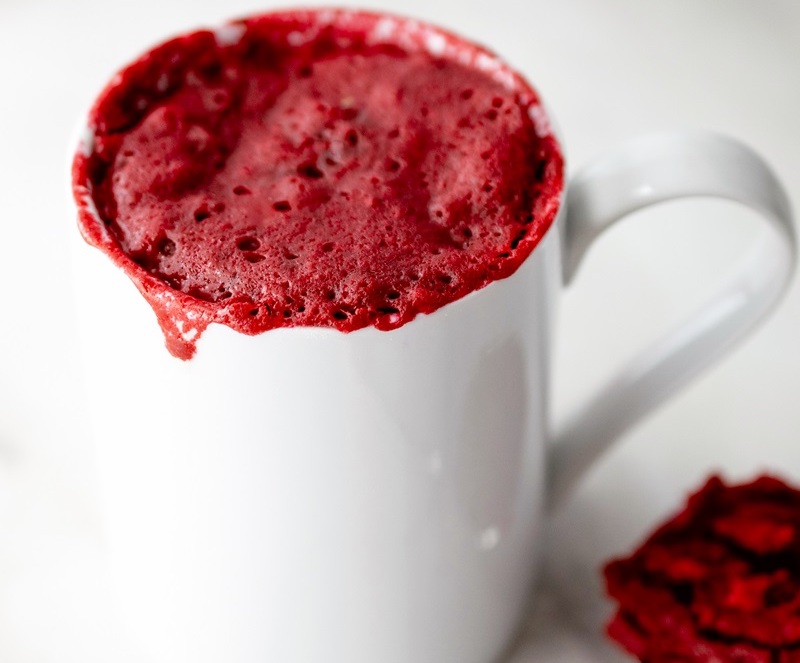 This recipe flips the script on traditional cake construction. Instead of spreading cream cheese frosting on top, this vegan blogger puts the cream cheese inside for a creamy, sweet surprise. Think of it as a decadent red velvet muffin with a melt-in-your-mouth center. Pro tip: this hack works for traditional cupcakes, too!
Get the recipe 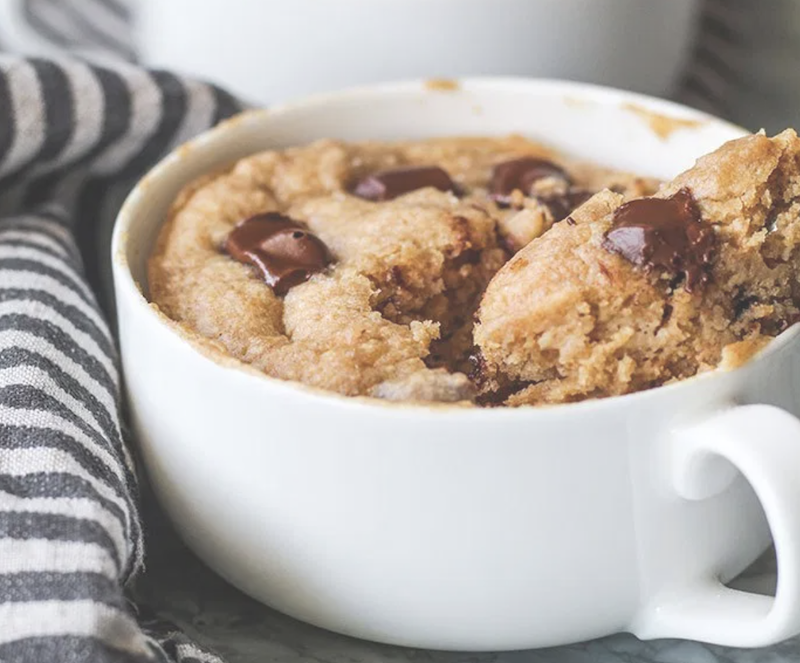 Make a single-serve pizookie in minutes with this quick recipe. Note: you will want to devour this as soon as it comes out of the microwave, but if you want to keep your taste buds, we advise you to wait five minutes. The chocolate will still be hot and melty, but it won’t be lava-hot. Finish this pizookie-for-one with a scoop of vegan ice cream and hot fudge.
Get the recipE

Ryan Shepard, founder and owner of The Vegan Rhino, is living his best plant-powered life and helping others to do the same.