When journalist Santiago Rodriguez Tarditi took a break from traveling the world to touch back down in Miami, he had one intention: to get his stuff out of storage and leave. Surprised when a friend suggested that he meet ecoentrepreneur Valeria Hinojosa as a potential romantic interest, he almost didn’t bite—resolving to move on to his next adventure. But when Tarditi found out that Hinojosa was vegan, an animal lover, and a fellow world traveler, he softened.

Hinojosa, founder of the environmental advocacy organization The Yindah Foundation, wasn’t looking for a relationship. But when the same friend told her “He’s vegan, he plants trees, and he’s very tall,” she agreed to meet the potential love match. 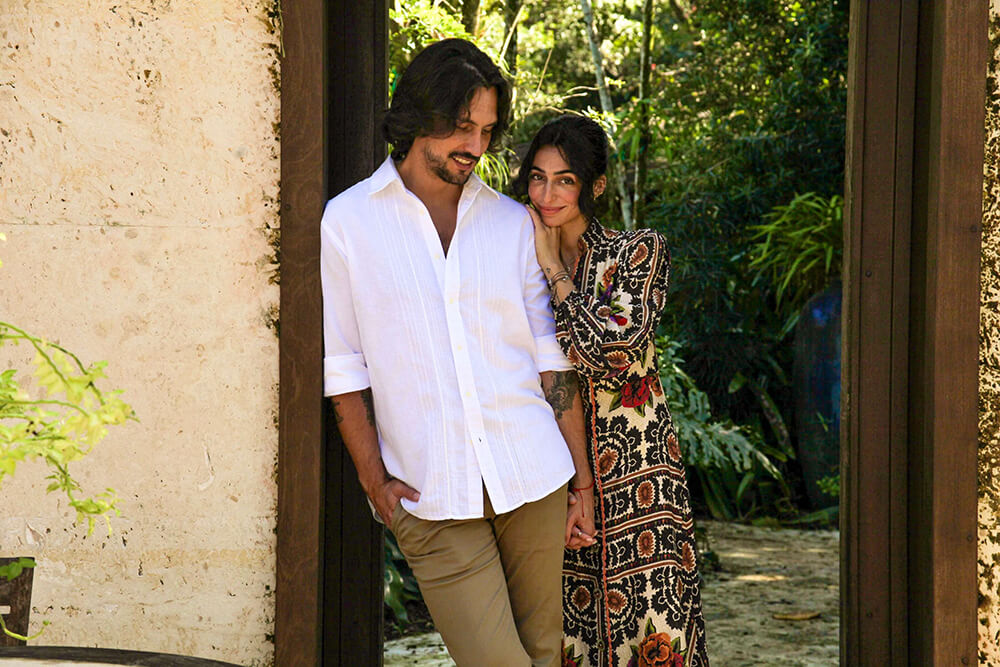 The pair met for a coffee date before Tarditi departed for Colombia. A few weeks later, the pandemic arrived, and quarantine prevented the two from reconnecting in person. So, they spent hours deep in conversation on video calls.

After being trapped in Colombia by travel restrictions, Tarditi secured a spot on a humanitarian flight to Florida two months after the couple first met. “Are you ready for me to move in with you?” he asked Hinojosa.

“That was our second date,” she says. “I picked him up, and then he moved in with me.”

Living together in the city Tarditi had tried to leave, the couple experienced a whole new Miami. Together they explored little-known parts of the city and off-the-beaten-path vegan-friendly restaurants, supporting them during the pandemic. “It was a good long staycation,” says Tarditi. 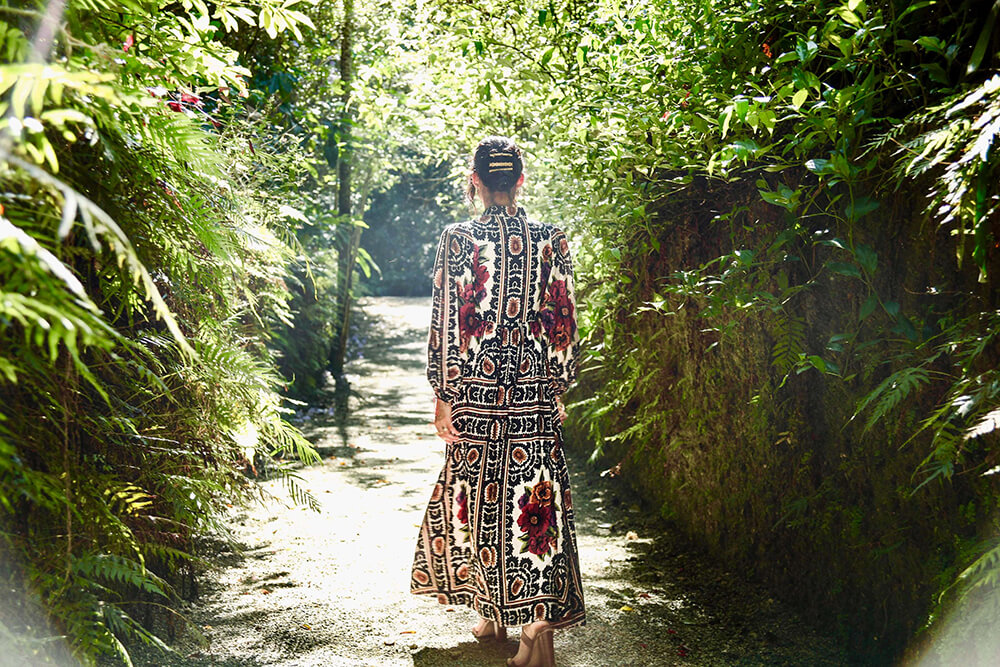 The couple—passionate about protecting the environment and animals—made it a priority to ensure every element of the celebration reflected their values. Their spirit of exploration brought them to the Patch of Heaven Sanctuary for the event—a lush natural space and nonprofit that helps the forest to grow through conservation programs. On a steamy Florida day, the pair honored the earth as much as they celebrated their love for one another, with a zero-waste wedding featuring eco-friendly décor that supported ethical businesses.

Standing amidst the sanctuary’s lush greenery, they were married by a spiritual healer, exchanging vintage rings from the 1930s. The newlyweds served the celebratory meal themselves, pouring organic vegan wine by TILIA into recycled glasses, and presenting the cake on compostable plates made from palm leaves.

As the sun set, the couple realized they hadn’t had their first dance. So, they shared an impromptu moment under the great tree—moving to a rhythm of their own.

Guests sat at a communal dining table covered in a hand-printed tablecloth made by craftspeople in India. In place of fresh flowers, the couple created a display of colorful fresh fruits and vegetables that became a meal the next day. 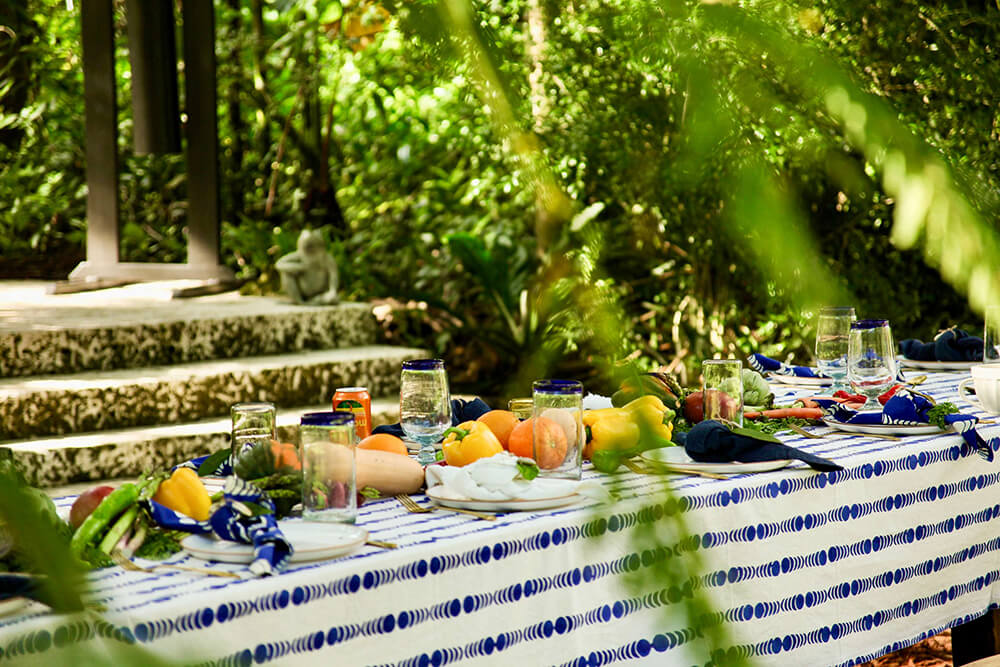 Surrounded by chirping birds, scampering lizards, and the crunch of fallen leaves, the sounds of the sanctuary were more meaningful to the couple than the music. “We kind of let nature be our soundtrack,” says Tarditi. 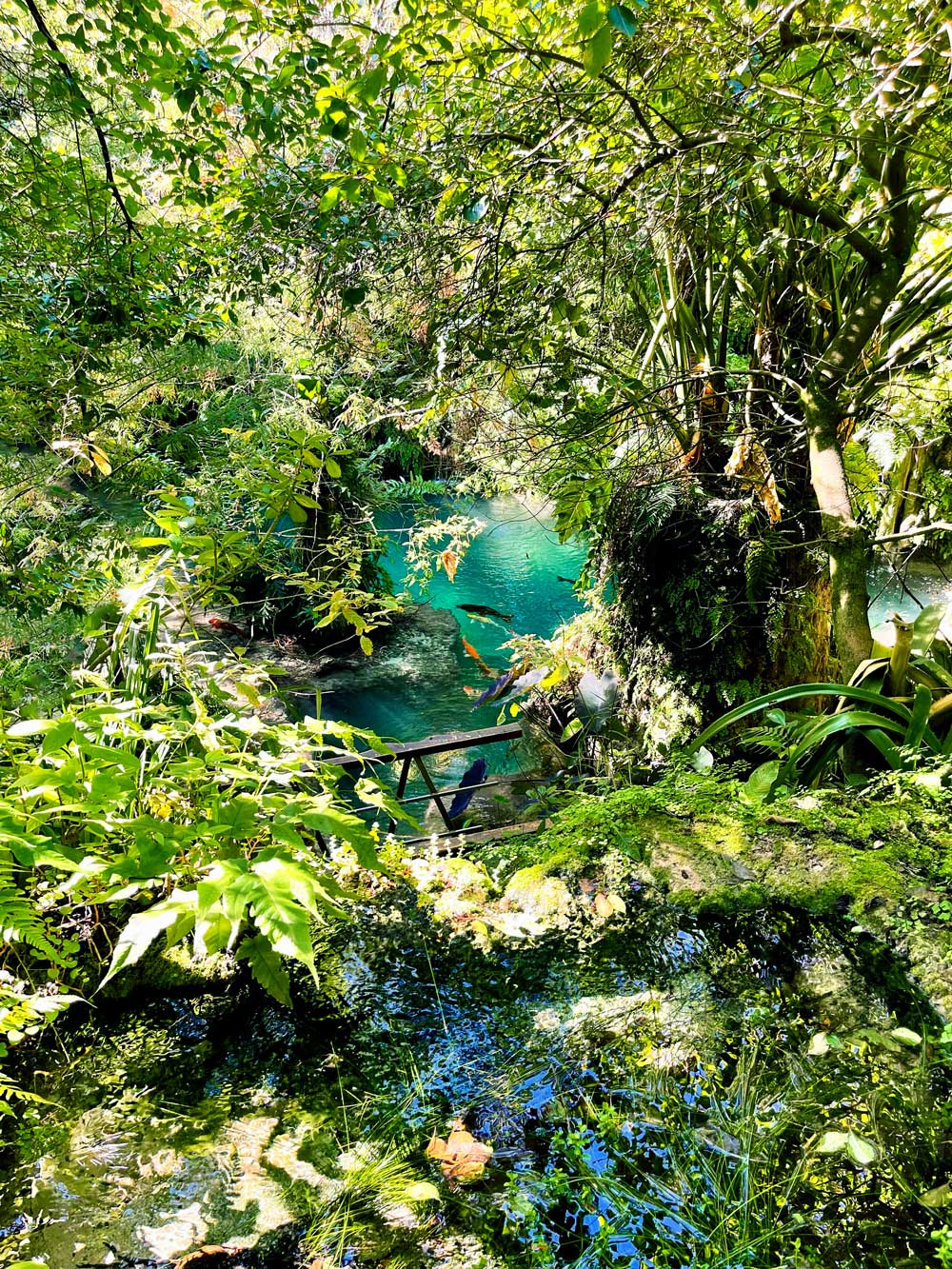 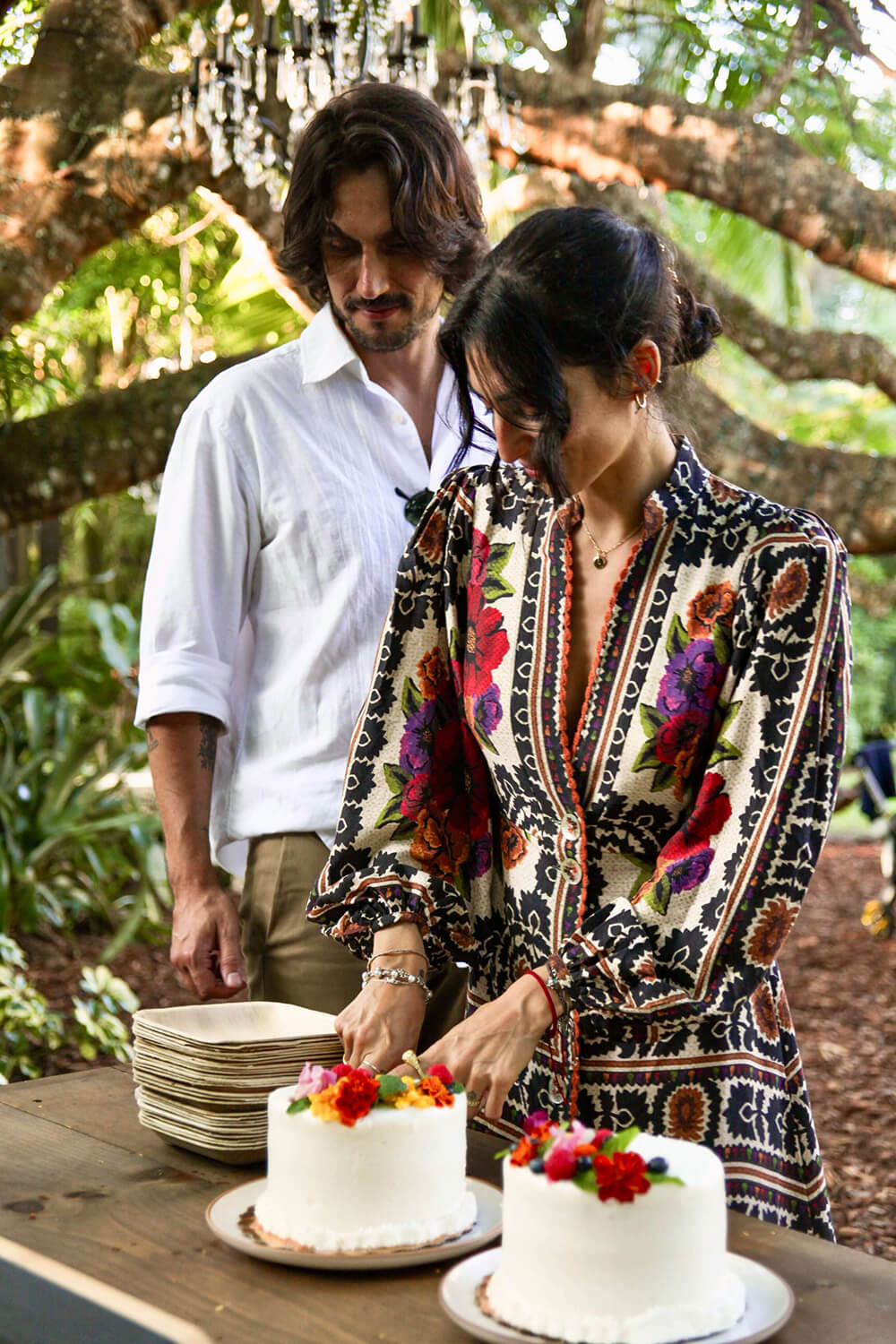 The bride’s intricately decorated, long-sleeved gown was created by fair-trade designer FARM Rio, which plants a tree for each purchase. She wore her hair up using clips from BaYou with Love, crafted out of recycled gold from computers. Tarditi’s vintage guayabera shirt and pants were purchased secondhand and worn with vegan boots made from recycled rubber and organic cotton by Virón. 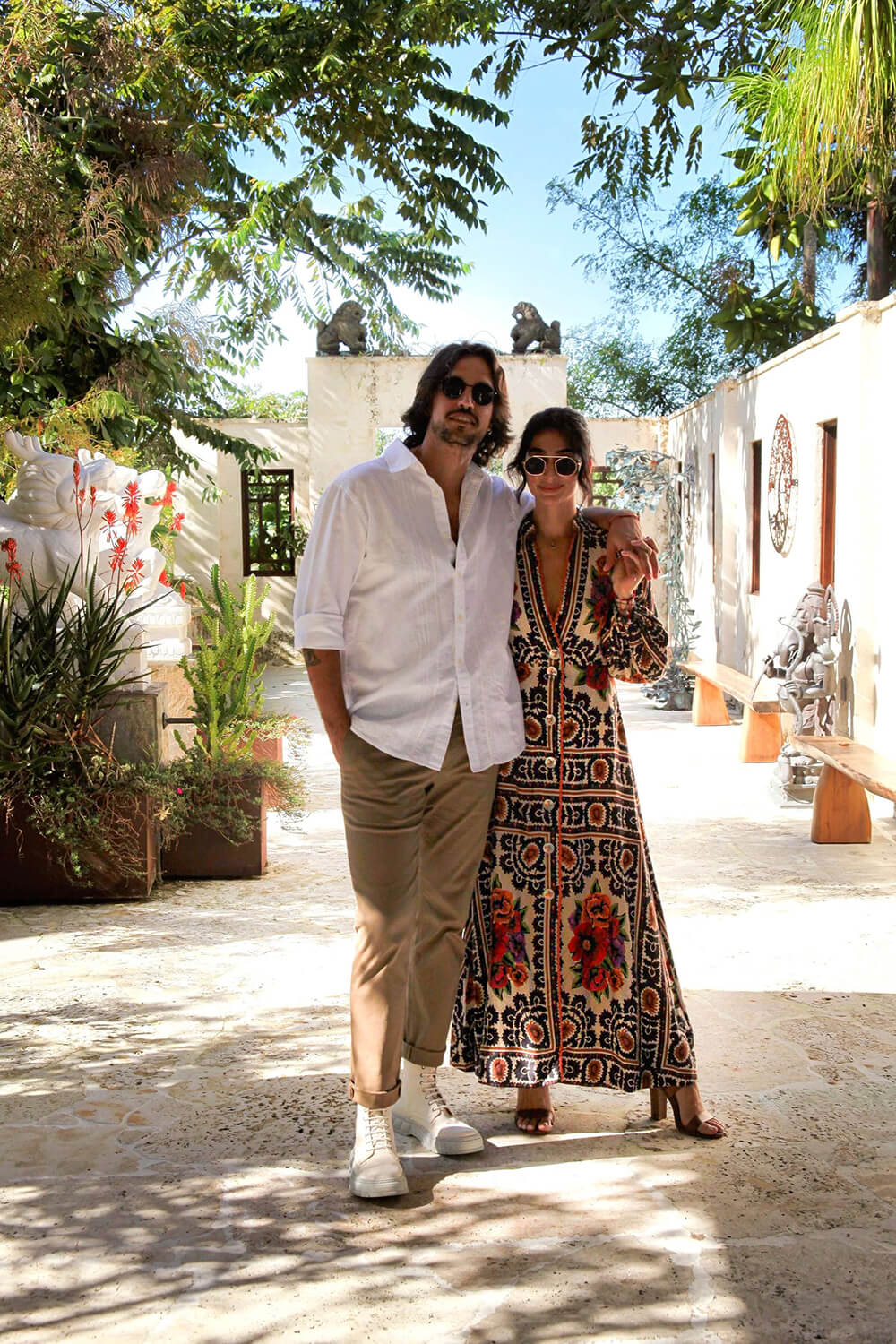 Hinojosa created the place cards for the wedding herself out of clay, non-toxic paints, and leaves she picked at the sanctuary the morning of the wedding. Tarditi stirred up refreshing sangria for the celebration—adding berries, fresh mint, and rosemary. 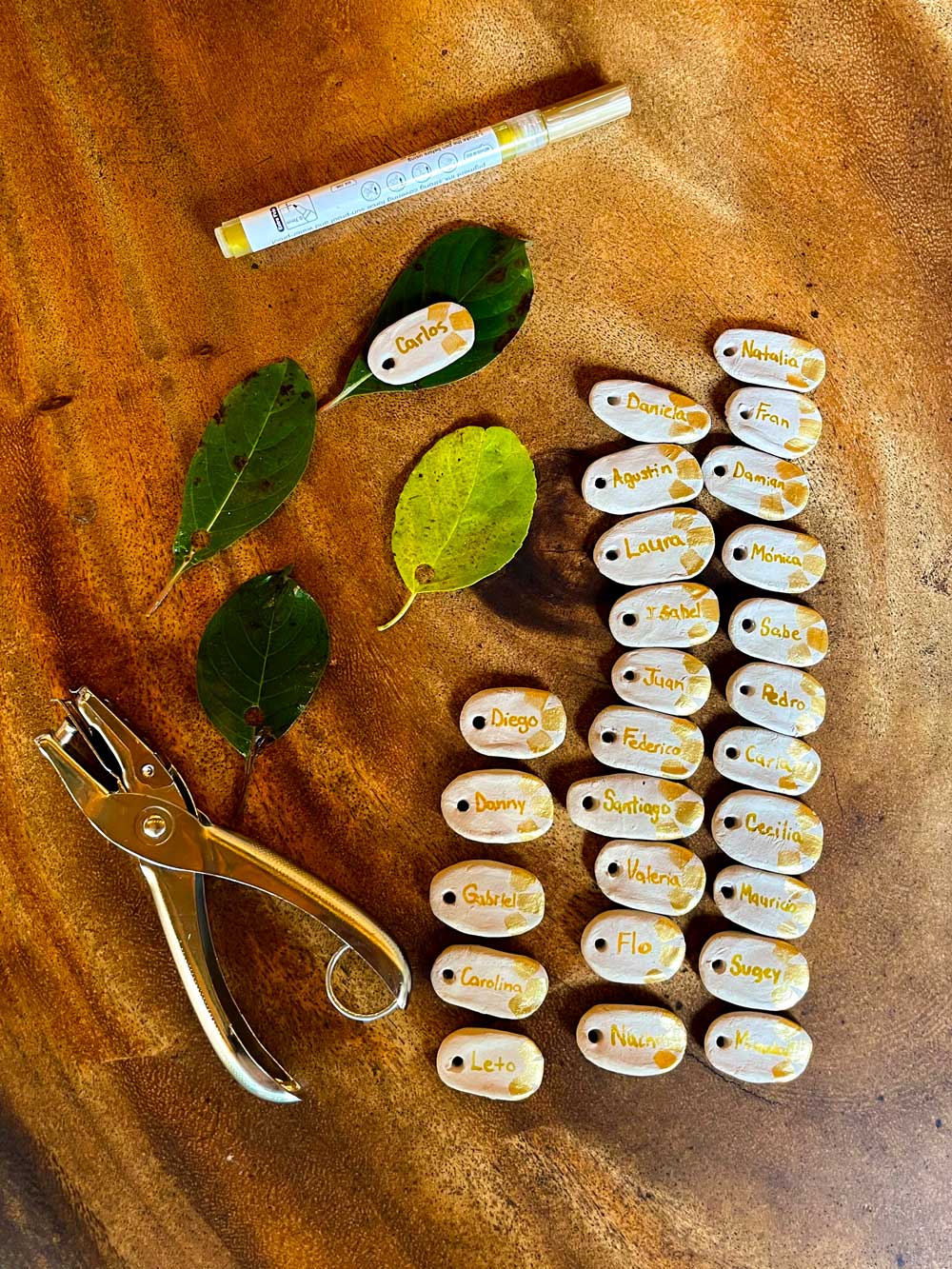