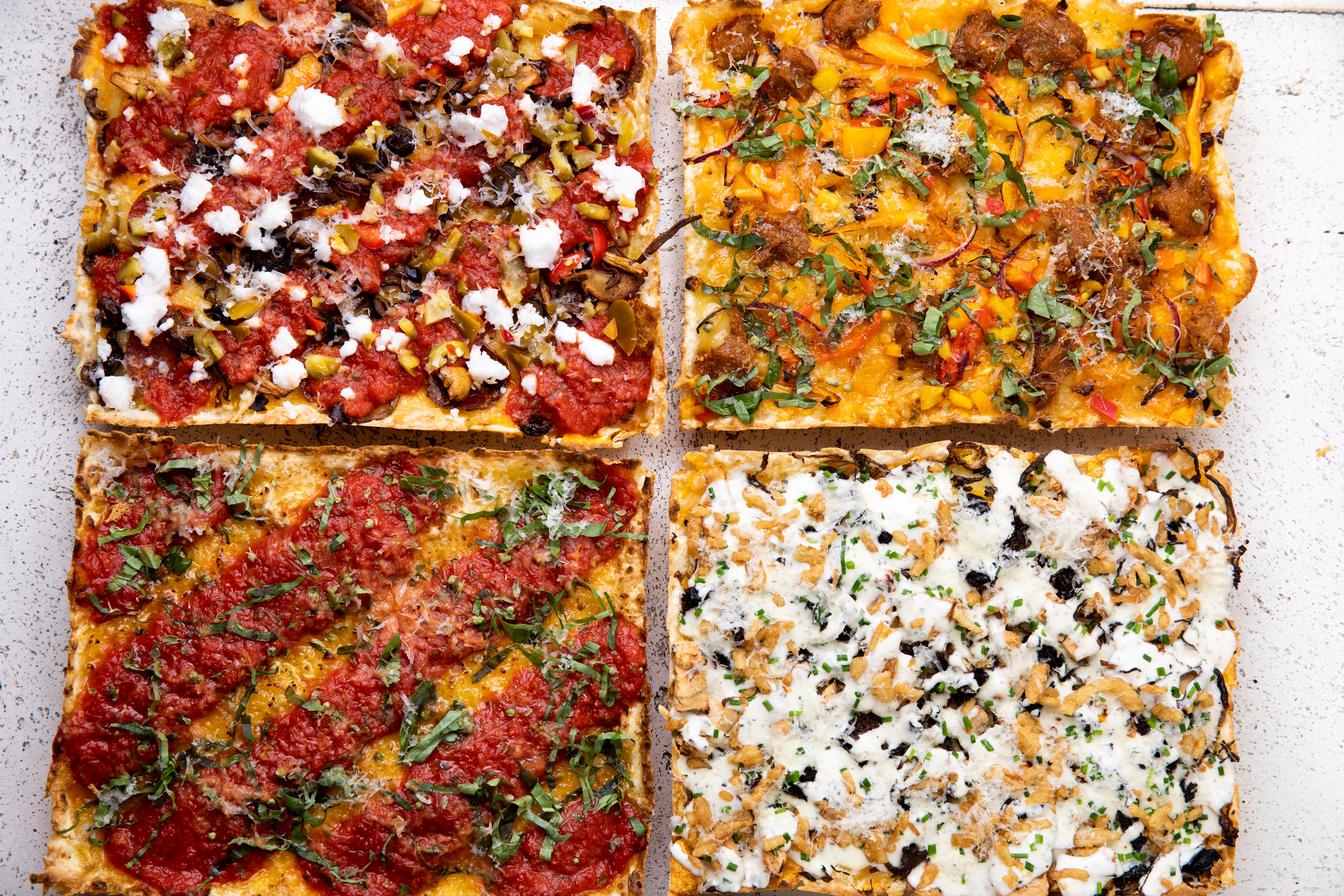 Joyride also added a vegan chopped salad made with Violife’s mozzarella and Be-Hive’s plant-based pepperoni and all of its existing pizzas can be customized with the newly available vegan ingredients.

The new plant-based menu at Joyride is a homecoming of sorts for founder Jesse Jacobs, whose parents raised him on a macrobiotic diet focused on whole foods and plant-based staples such as seitan. Jacobs’ parents ran a cooking school from home and wrote the book on seitan—publishing Cooking With Seitan: The Complete Vegetarian Wheat-Meat Cookbook in the ‘80s. In 2002, Jacobs parlayed his love of healthful food into Samovar, a tea lounge with an avant-garde menu that featured a variety of plant-based options.

After the pandemic shuttered Samovar (which still operates as an online tea shop), Jacobs became reinspired to create a new business in its two locations and Joyride was born in August 2021. Created in the 1940s, Detroit-style pizza is a perfect fit for San Francisco, where the fog makes for the ideal environment for Joyride’s 48-hour fermented focaccia crusts. While approximately 20 percent of Bay Area pizza shops offer at least one Detroit-style pie, only a handful are exclusively focused on the style—with even fewer offering plant-based options.

And the shop’s plant-based menu is a far cry from an afterthought—which is how many restaurants approach vegan options, Jacobs says—but rather a focused and intentional return to his roots.

“When it comes to translating this deep-rooted passion for quality into an exciting and meaningful business, I’m always looking for whole foods that delight my taste buds, nourish my body, and are low impact on the earth. When I find something that hits all three marks, I know I have a winner,” Jacobs told VegNews. “To best serve our customers, it was critical to span the spectrum of flavor, aroma, and texture … because nowadays people are looking for plant-based options not only to deal with allergies or dietary restrictions, but also for flavor, variety, and eating in a more sustainable way.” With the new menu, Jacobs is also re-embracing seitan (the base of Joyride’s pepperoni), a childhood favorite that he says has “gone from fringe to mainstream.”

“These options are no longer the food for the fringes and die-hards. Casual diners have so many choices now and many people choose to mix it up, beef one day, plant-based the next,” Jacobs said. “These developments are a win for guests who enjoy more variety and a win for the planet with more sustainable options for today and into the future.” 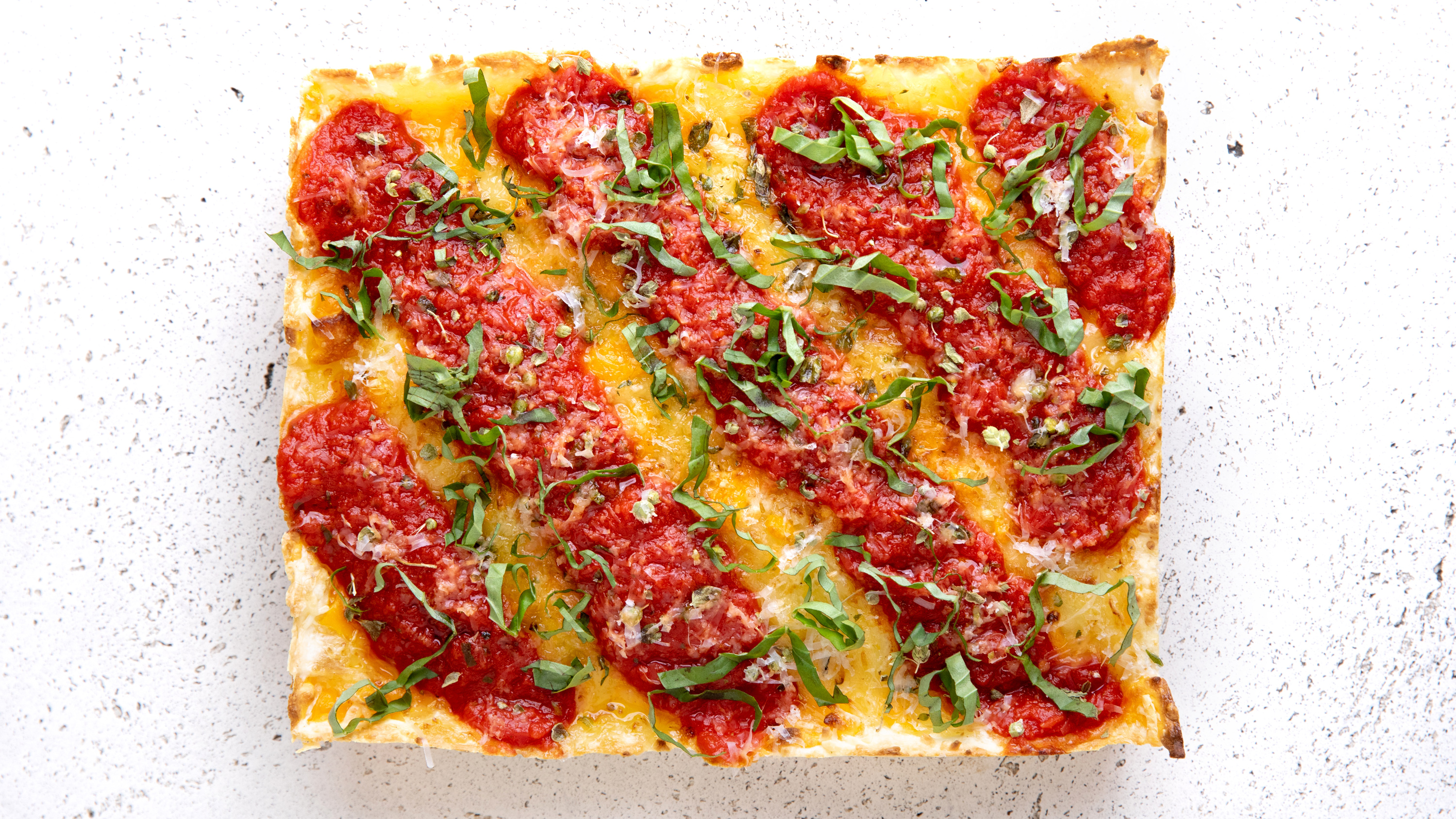 All about that dough

At Joyride, all of the pizzas are made atop a bouncy focaccia crust which draws customers by smell alone from the streets every day. For Jacobs, this style—which the longtime pizza fan discovered during the 2020 sourdough-baking frenzy—solves a unique set of pizza problems and the plant-based meats and cheeses from Violife, Beyond Meat, Be-Hive, and Sweet Earth solve another.

For one, the square pie allows for an even distribution of toppings that eliminates the wasteful act of not consuming the “bones” (crust ends) of a traditional round pizza. The Detroit-style pie is also topped with sauce after the bake, eliminating the mouth burn that can occur from biting into the first slice of a round pie with its piping hot sauce.

Perhaps one of the most important elements of Detroit-style pizza is the “frico,” a cheesy buildup around the edges of the square pie that turns into crunchy, lacy cheese crackers—something that chef Alastair Hannmann, Joyride’s “Chief Pizza-ologist,” has been able to recreate with the shop’s new plant-based pies which feature a generous dose of vegan cheese. 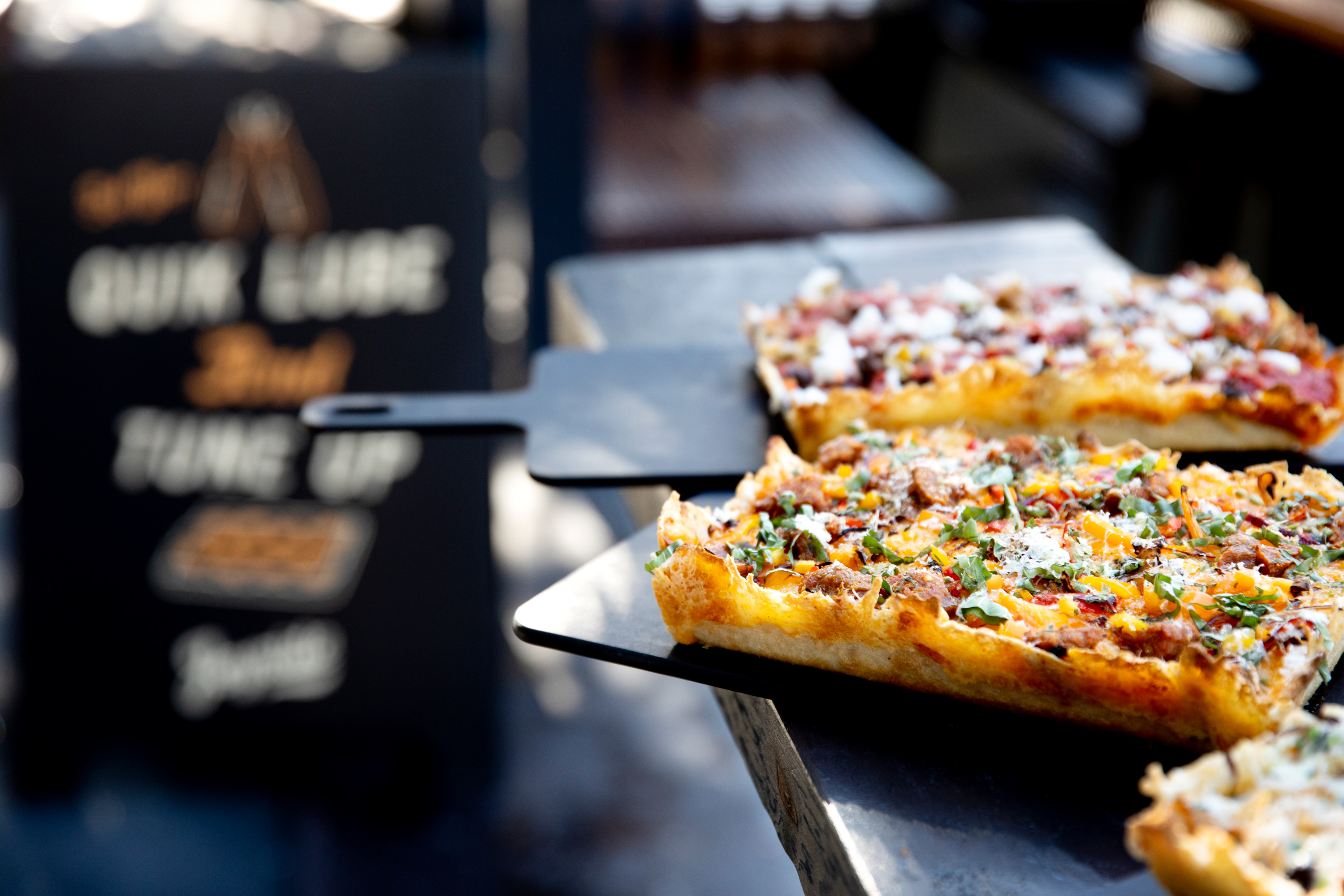 “I’ve been really surprised with the performance of the plant-based products we settled on. I particularly like how companies are starting to focus on the texture element. They are creating something that tastes great in its own right, not just trying to mimic their animal counterparts,” Hannmann told VegNews. “The cheeses have probably surprised me the most. Watching the transformation during the bake is fascinating. The way our plant-based cheese bubbles and caramelizes just like dairy cheese is amazing. And the taste is surprisingly close. We’ve even developed a little cheese pull.”

While Hannmann is not vegan, he admits that he chooses to eat plant-based meats and cheeses weekly because doing so allows him to eat more pizza. “But the best part is that I am excited to finally have something to offer for the vegan/plant pizza eaters,” Hannmann said. “I’m a purist when it comes to the dough, with a huge focus on the crust development and fermentation. Now, I’m super excited to bring some supporting actors to the show.”

The new vegan pies at Joyride are innovative in their own right, but Jacobs is also tapping the thriving local plant-based startup scene to get new and “never been done with pizza” offerings on the menu in the coming months.