Popcorn chicken is somewhat of a niche food—it’s not as popular as chicken nuggets or chicken tenders, but there’s something to this popable snack that doubles as a meal. The vegan chicken game is showing up en force in supermarkets—from the multitudes of plant-based nuggets to frozen grilled chicken strips—but popcorn chicken is just starting to enter the mass retail scale. While we wait for the flood of options, here are seven vegan popcorn chicken recipes you can make at home. 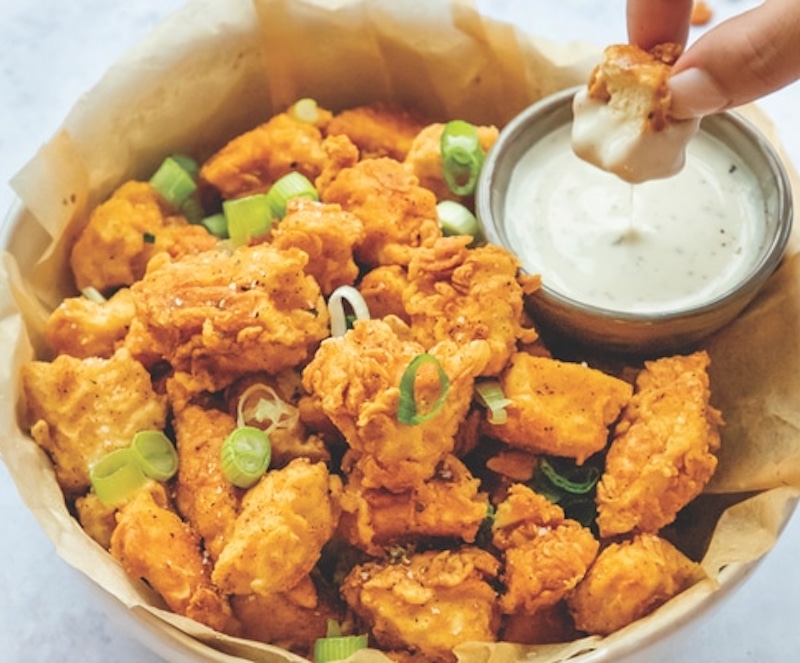 When shopping for ingredients, don’t settle for firm tofu—extra-firm is key to achieve that juicy, meaty bite. This recipe is as authentic as you get, so be ready to deep fry! The result yields sixty golden pieces of seasoned, battered-and-fried tofu that will be gone in a flash.
Get the recipe here. 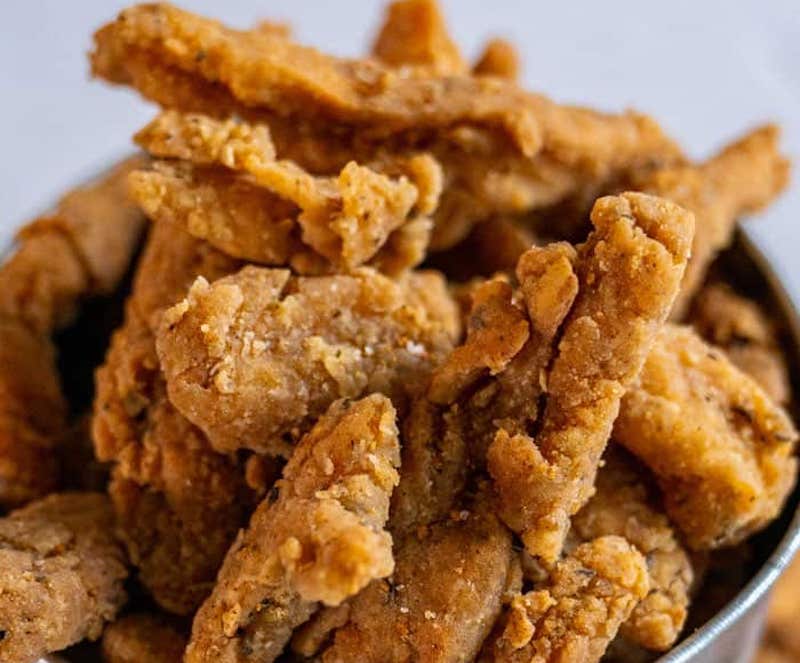 The deep-fryer will earn a permanent spot on your kitchen counter after you make this recipe. Better than Bouillon No Chicken cubes (which are vegan) permeate chewy soy curls with an authentic chicken taste, imparting flavor in every single component. The curls are dunked in a seasoned batter, dropped into bubbling oil, then placed on a cooling rack to retain a crispy exterior. Allow to cool just long enough to not scorch your mouth (it’s hard, we know).
Get the recipe here. 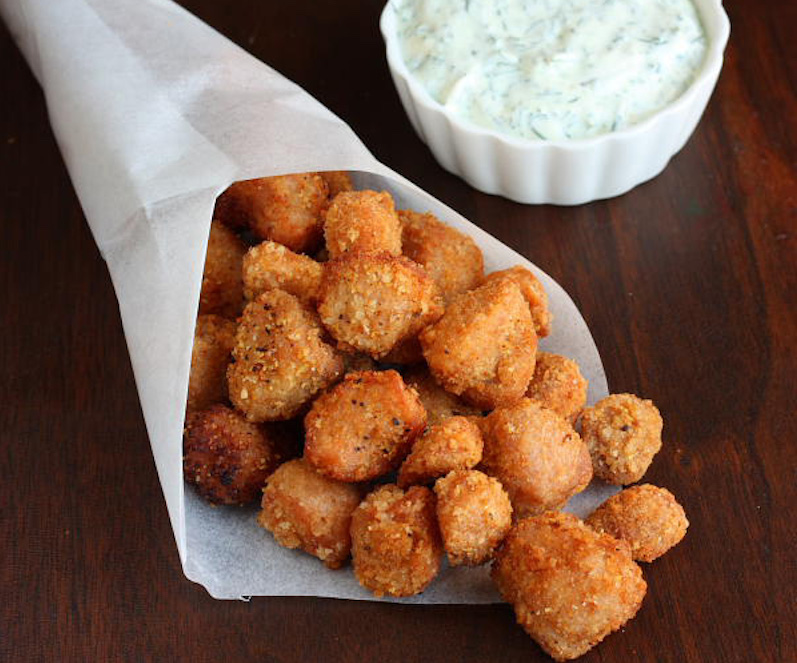 Turn up the tunes and have some fun with this recipe—step five involves a bit of shake-and-bake! Well, technically the breaded soy chunks are fried, but you might as well have some fun shaking the Ziploc bag to coat each textured nugget. Don’t skip the dip, either. This dill-infused vegan sour cream couldn’t be easier to make, and it rivals any dipping sauce you’ll find at a drive-thru—including a certain controversial chicken chain that’s closed on Sundays.
Get the recipe here. 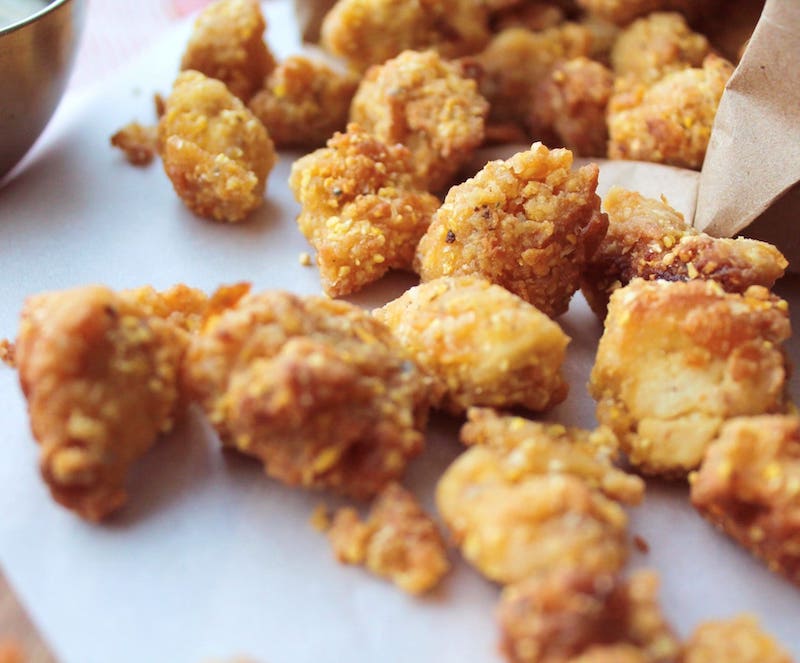 When it comes to kid-friendly finger food, dads definitely know best. This solid recipe relies on protein-packed tofu and a simple vegan buttermilk dredge to achieve fast-food taste with vegan ingredients. The instructions include shallow fry and air-fryer cooking methods, so anyone can take this on regardless of their kitchen appliance situation.
Get the recipe here. 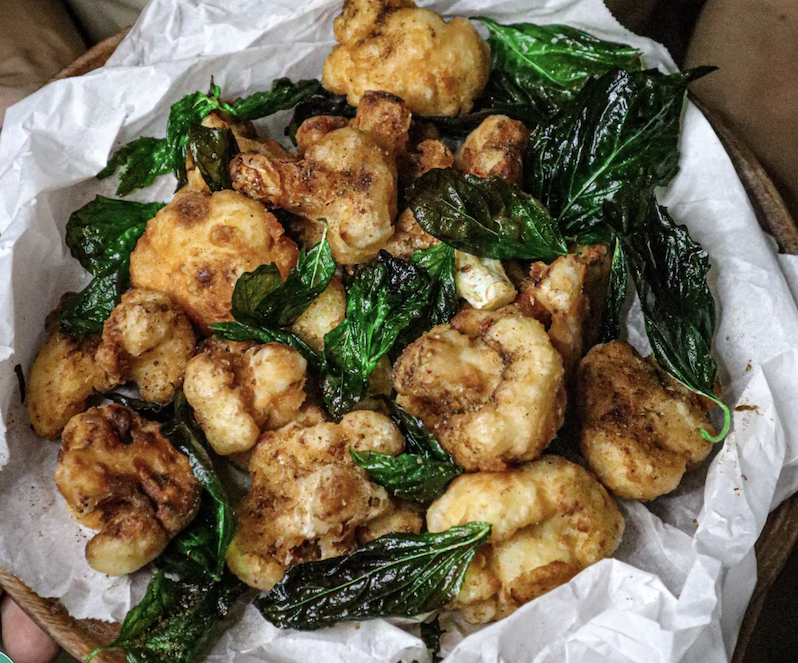 Cauliflower florets work wonders when mimicking buffalo-style chicken—it’s no surprise they translate exceptionally well into popcorn chicken, too. Social media star George Lee puts a Taiwanese spin on this American classic by adding fried basil, Sichuan pepper, and ground five-spice to the mix. These simple accouterments transform your run-of-the-mill fried cauliflower from bland to bold.
Get the recipe here. 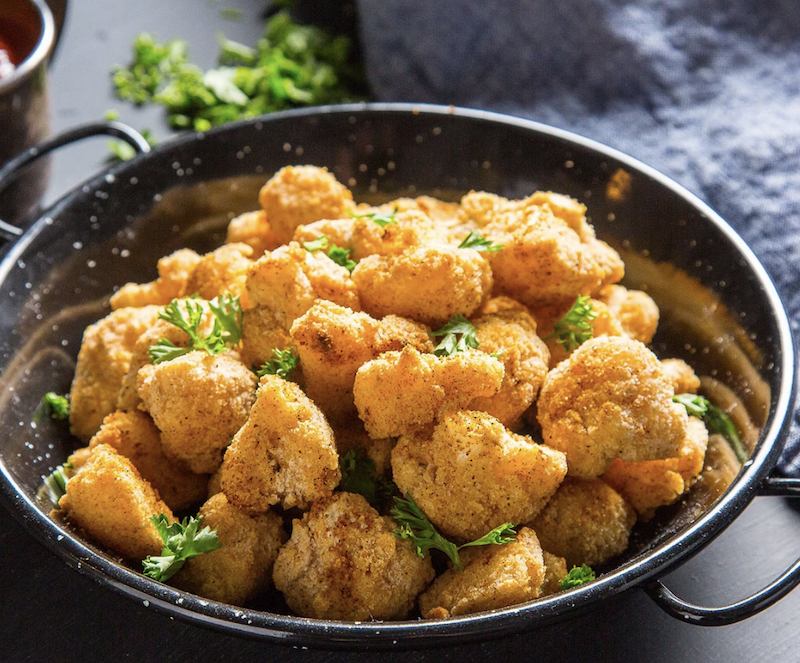 Can’t take the spice? Revert to this tried-and-true, baked-and-breaded cauliflower popcorn chicken recipe. While deep-frying typically provides that necessary crunch, carbonated water and coarsely ground corn flakes mimic this satisfying texture without excess oil. Enjoy these healthy bites on their own or piled on top of a deeply satiating salad drizzled with vegan ranch.
Get the recipe here. 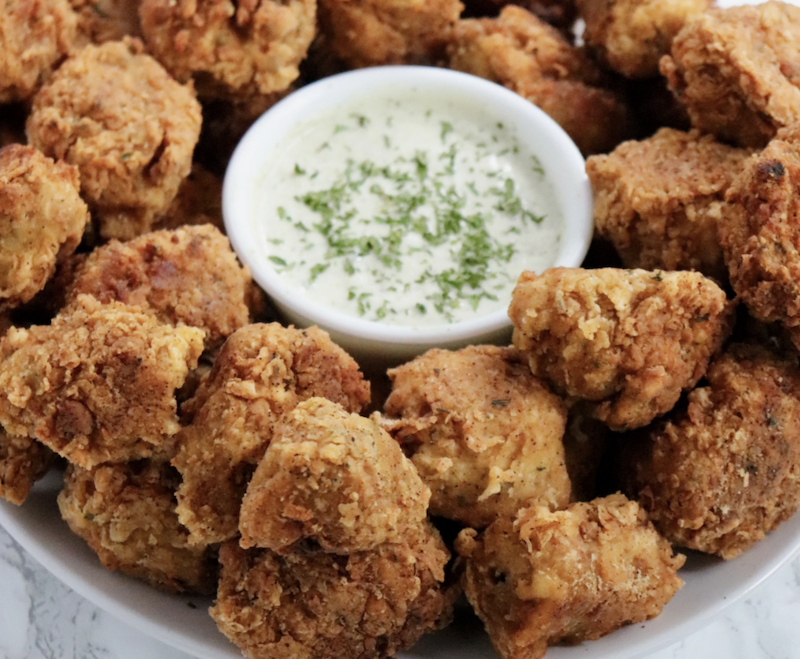 Seitan’s dense and chewy texture makes it a perfect match for veganized popcorn chicken. While store-bought seitan is readily available in most supermarkets, it’s best to make your own with this recipe to get the chicken flavor just right. If you’re crunched for time, try to find a chicken-seasoned seitan at the store (such as Upton’s Naturals Chick Seitan). Once you have your base, the process is as simple as season, dredge, and fry until golden brown. “Addictive” doesn’t even begin to explain the pull of this delectably savory snack.
Get the recipe here.