Forget Taco Tuesdays—a true taco aficionado never limits this street food to one day of the week. It’s taco time any day, any time. From TexMex puffy tacos to tacos dorados de papa (fried potato tacos), there’s a regional variety or unique mashup for every meal of the month. 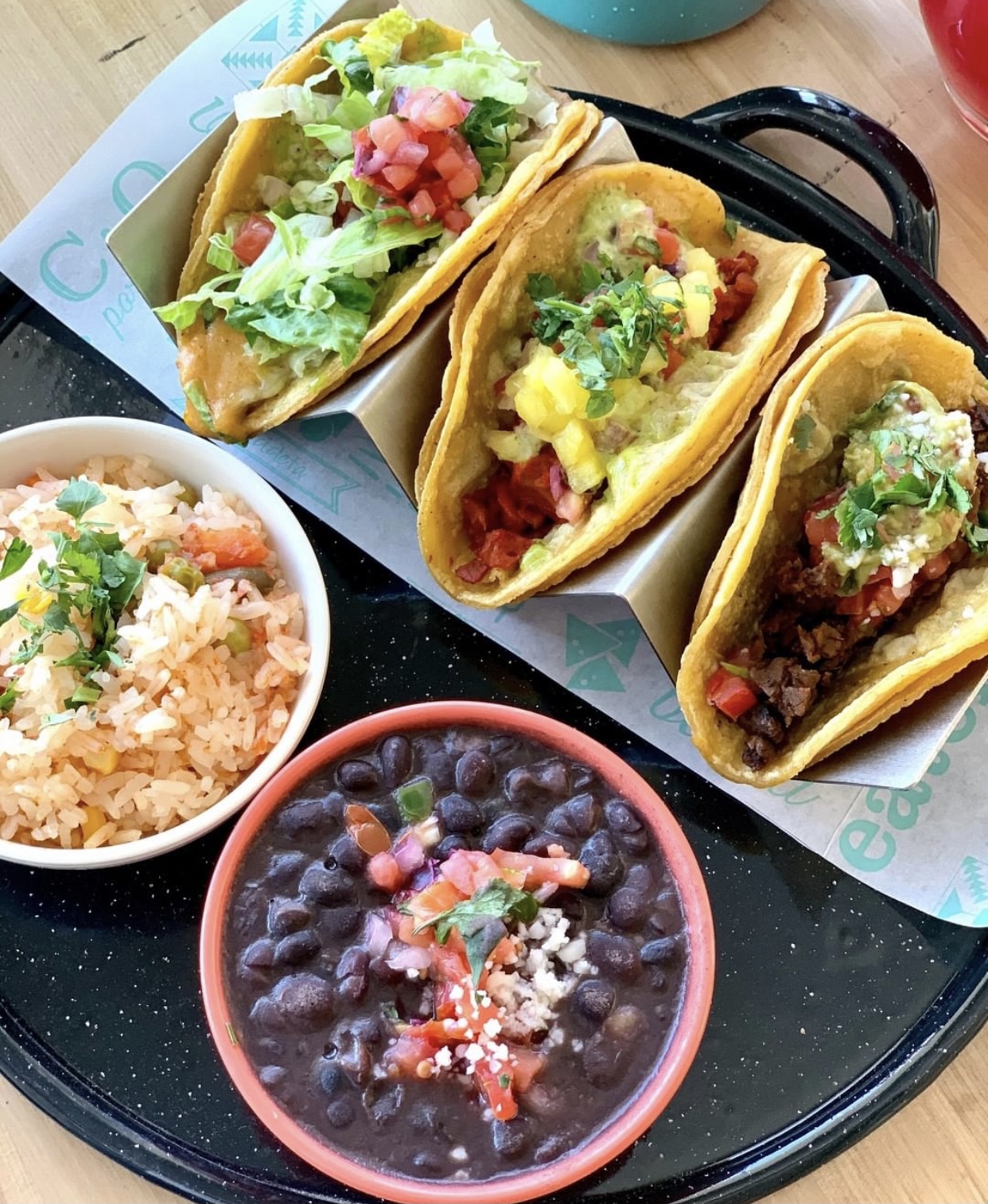 Inspired by the Middle Eastern technique of cooking meat on a spit, al pastor is traditionally made with pork that is rubbed down with spices, slow-roasted, and mixed with pineapple. The vegan version—often made with mushrooms or seitan—provides the same sweet-meets-spicy flavor profile without the rotating pork shank.
How to make them: Vegan Tacos Al Pastor by Chicano Eats
Where to find them: Tacotarian, Las Vegas, NV 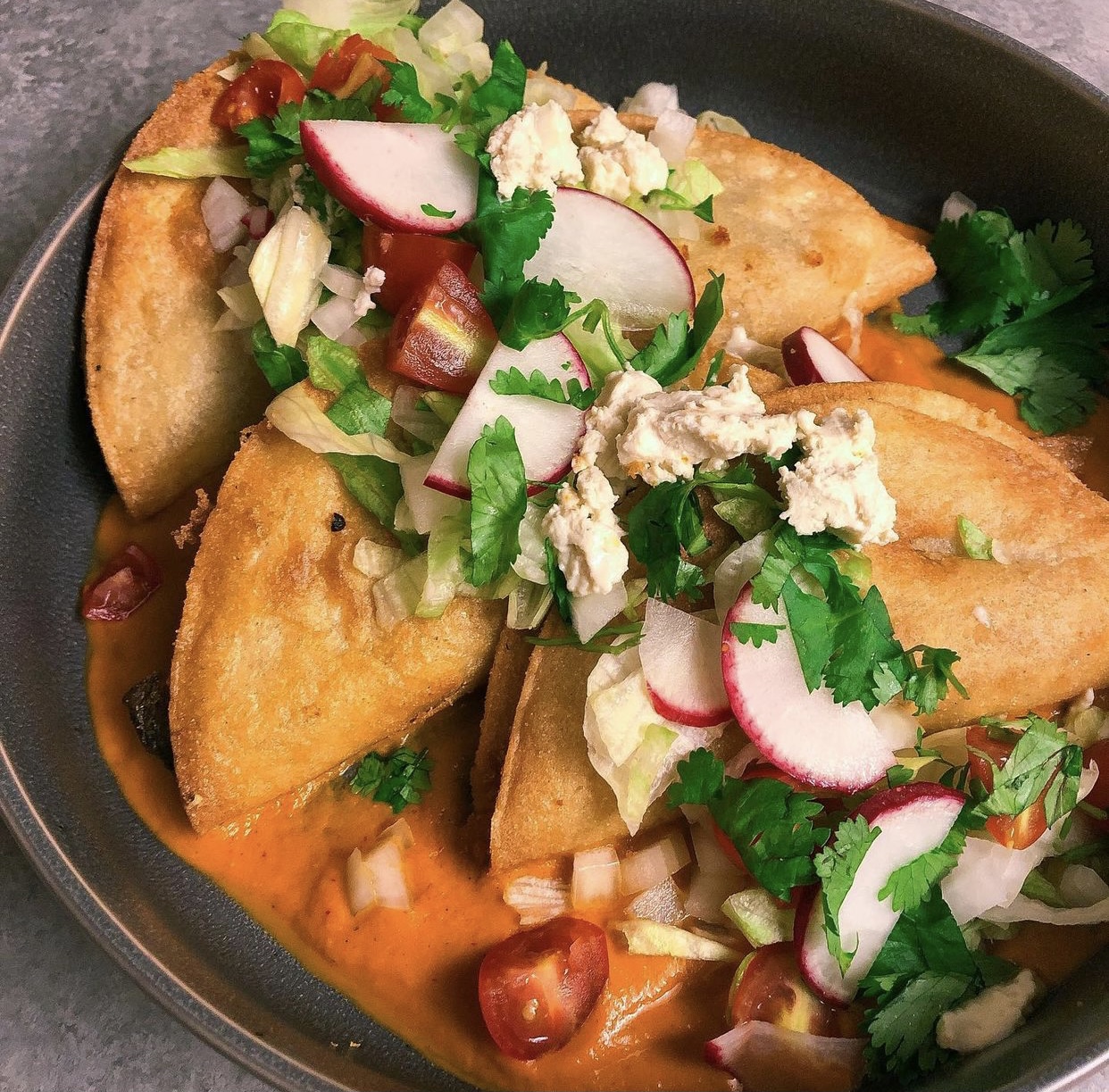 At times, there is nothing better than a simple fried potato taco. Whether enjoyed on their own or garnished with salsa and guacamole, these potato-stuffed fried tortillas never fail to satisfy a savory craving.
How to make them: Tacos Dorados de Papa by Mexvegana
Where to find them: Pancho’s Vegan Tacos, multiple locations, NV 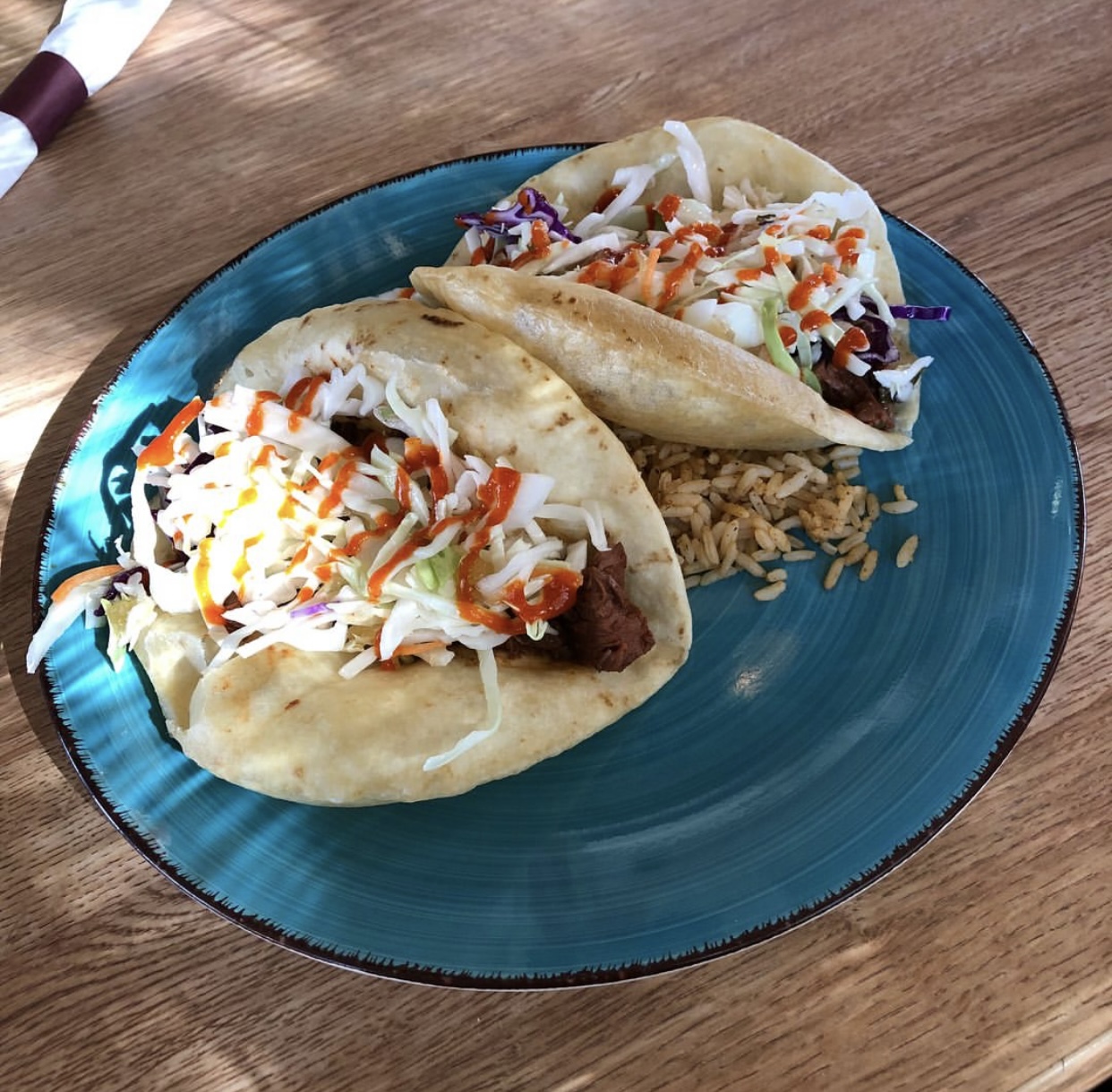 These regional handholds of golden-fried tortillas are rare outside of their San Antonio birthplace, but if you have the opportunity to try them, you’ll understand the craze. Follow the recipe below to make the tortillas at home, then fill with whatever your taste buds desire (chorizo and guacamole work really well here!).
How to make them: Puffy Taco Shells by Chef John
Where to find them: Zainy’s Flyin’ Grill, Northern Virginia 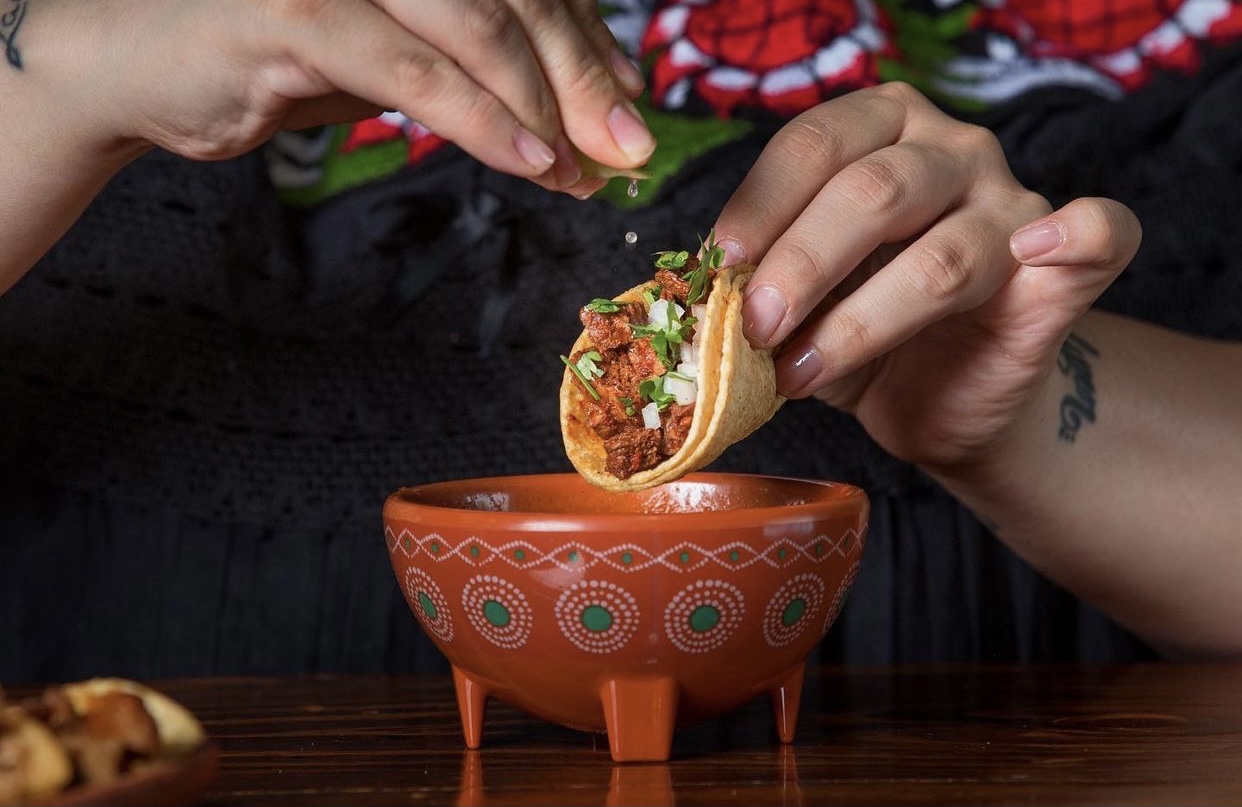 Trust us, you don’t want to know where the meat-based barbacoa comes from. The vegan version, however, is typically made from mushrooms, seitan, or jackfruit. It’s tender, juicy, and not too spicy for those with sensitive palates.
How to make them: 1-Pot Vegan Barbacoa by Minimalist Baker
Where to find them: El Palote, Dallas, TX 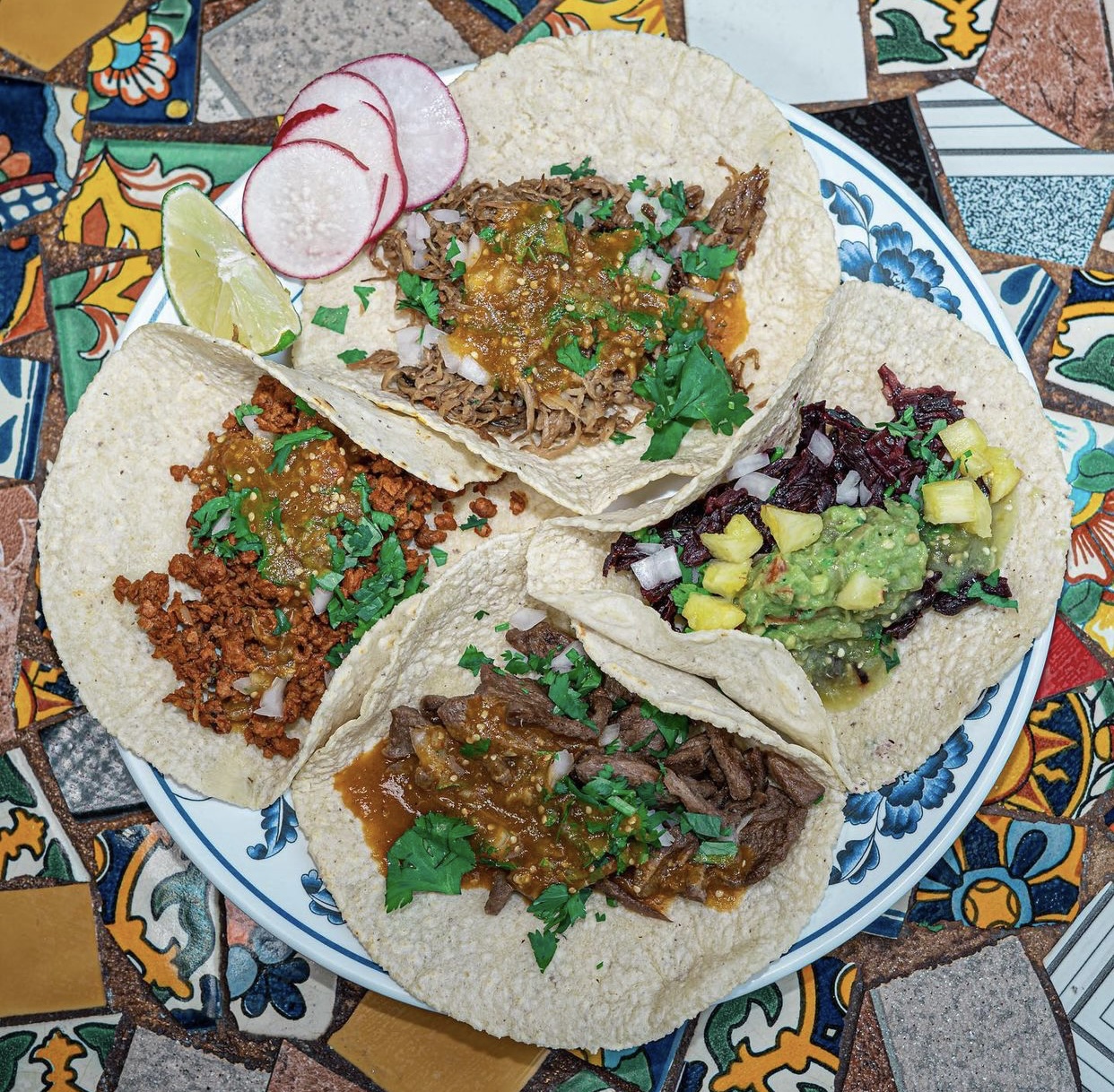 Both mushrooms and jackfruit perfectly mimic the slow-cooked pulled pork that characterizes meat-based carnitas. This filling is succulent, flavor-packed, and works so well in a freshly pressed corn tortilla.
How to make them: Vegan Carnitas with Mushrooms by Vegan Richa
Where to find them: Vegan by El Zamorano, Costa Mesa, CA 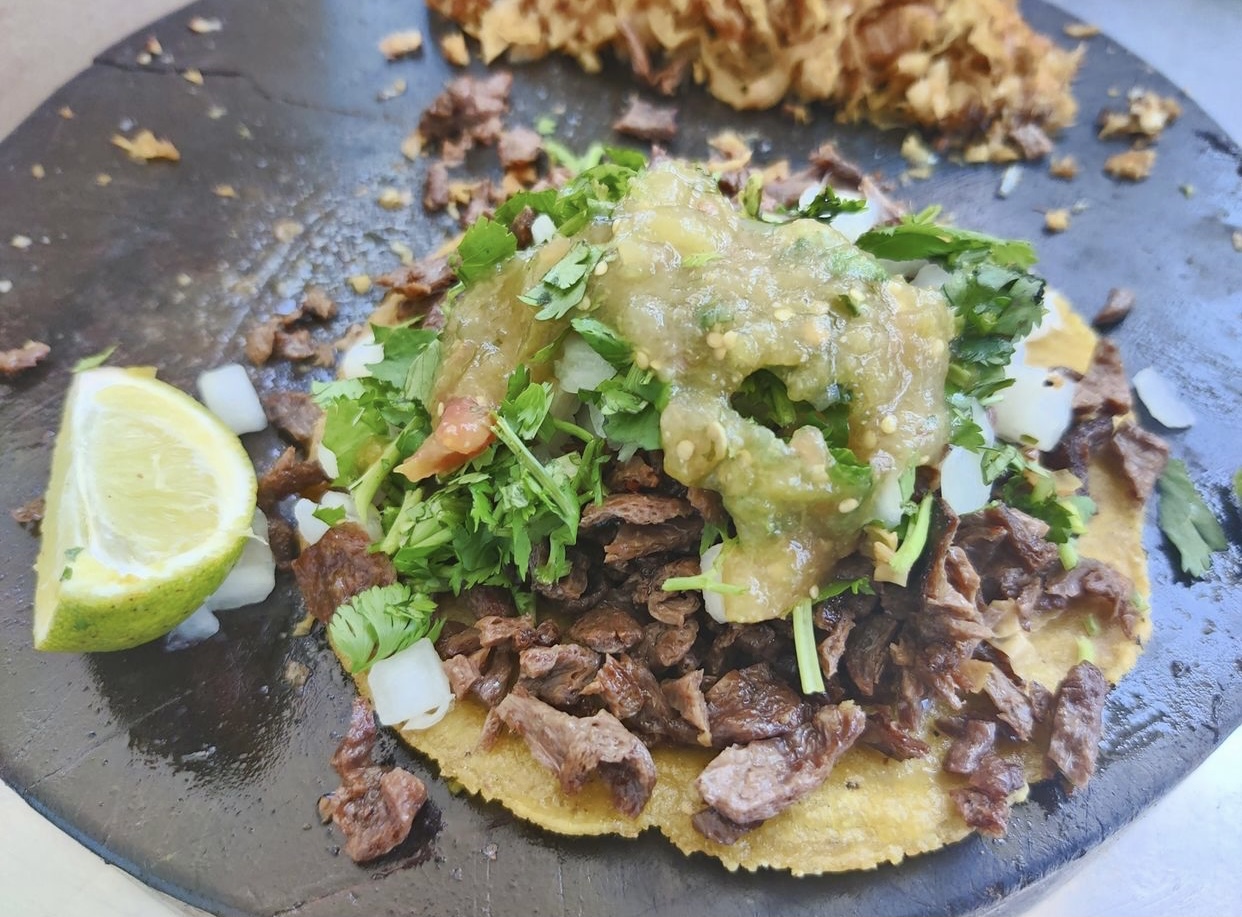 For a smoky, grilled flavor of plant-based beef, opt for the carne asada. It’s become a staple protein option for vegan taquerias from Los Angeles to San Antonio. When in doubt, it’s hard to go wrong with this safe bet.
How to make them: Vegan Carne Asada Tacos by Sweet Simple Vegan
Where to find them: Taqueria La Venganza, Oakland, CA 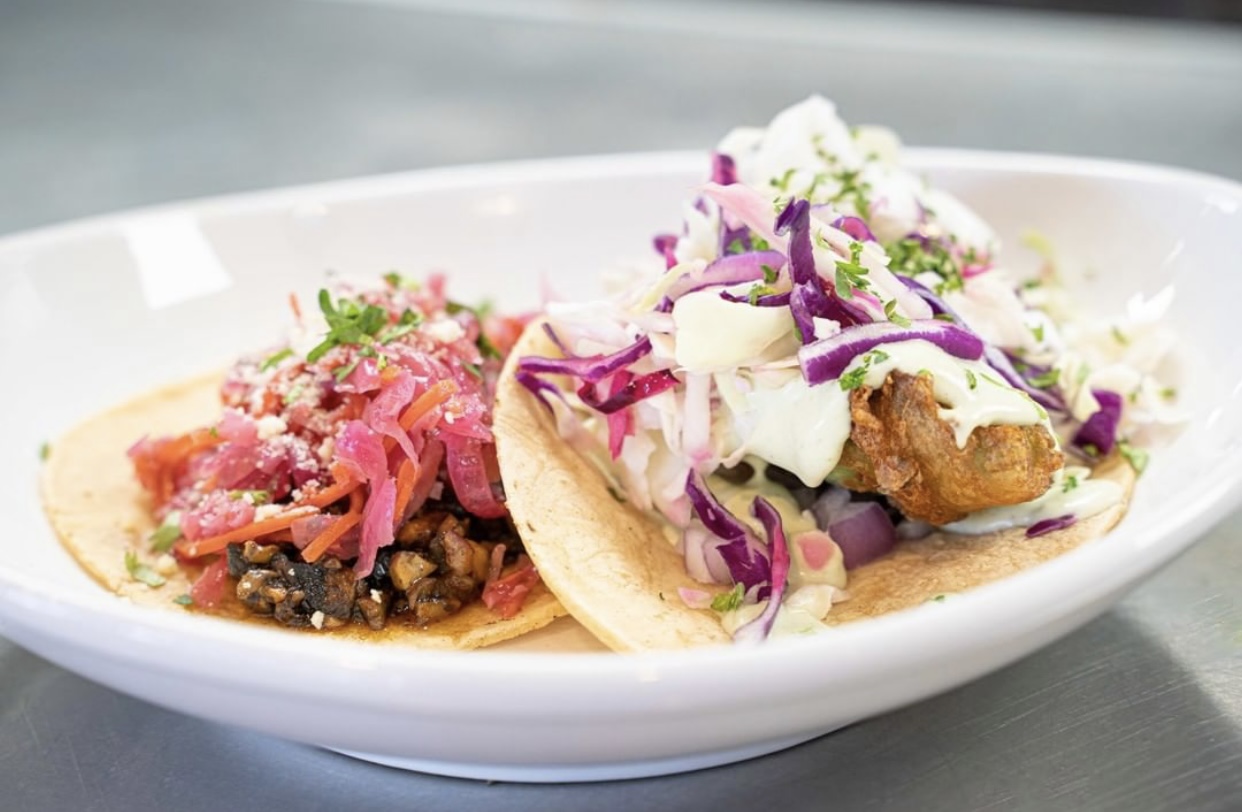 Why top a taco with guac when the entire taco can consist of a thick wedge of crispy-on-the-outside, creamy-on-the-inside avocado? This type of taco needs no adornments; it’s perfect as is.
How to make them: Vegan Fried Avocado Wedge Tacos by the Leon Fast Vegan Cookbook
Where to find them: Tacos Tu Madre, Los Angeles, CA 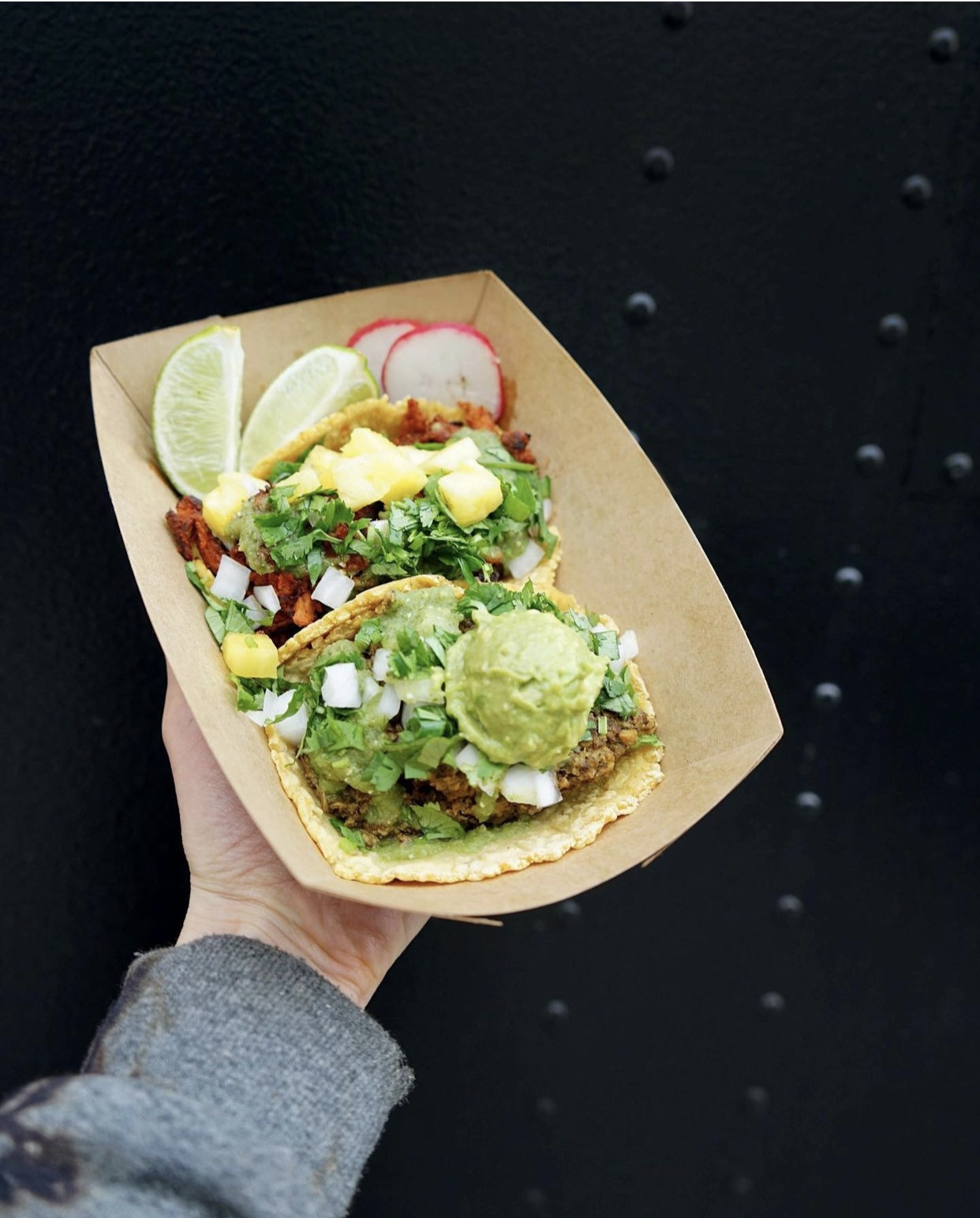 This meaty, stew-like filling comes from the Guadalajara city of Mexico and is often served as a celebration dish. However, it’s not uncommon to find it as a vegan option in the States. Be warned: it’s spicy—at least, it should be.
How to make them: Vegan Birria Tacos by Eat Figs, Not Pigs
Where to find them: La Taquiza, Portland, OR 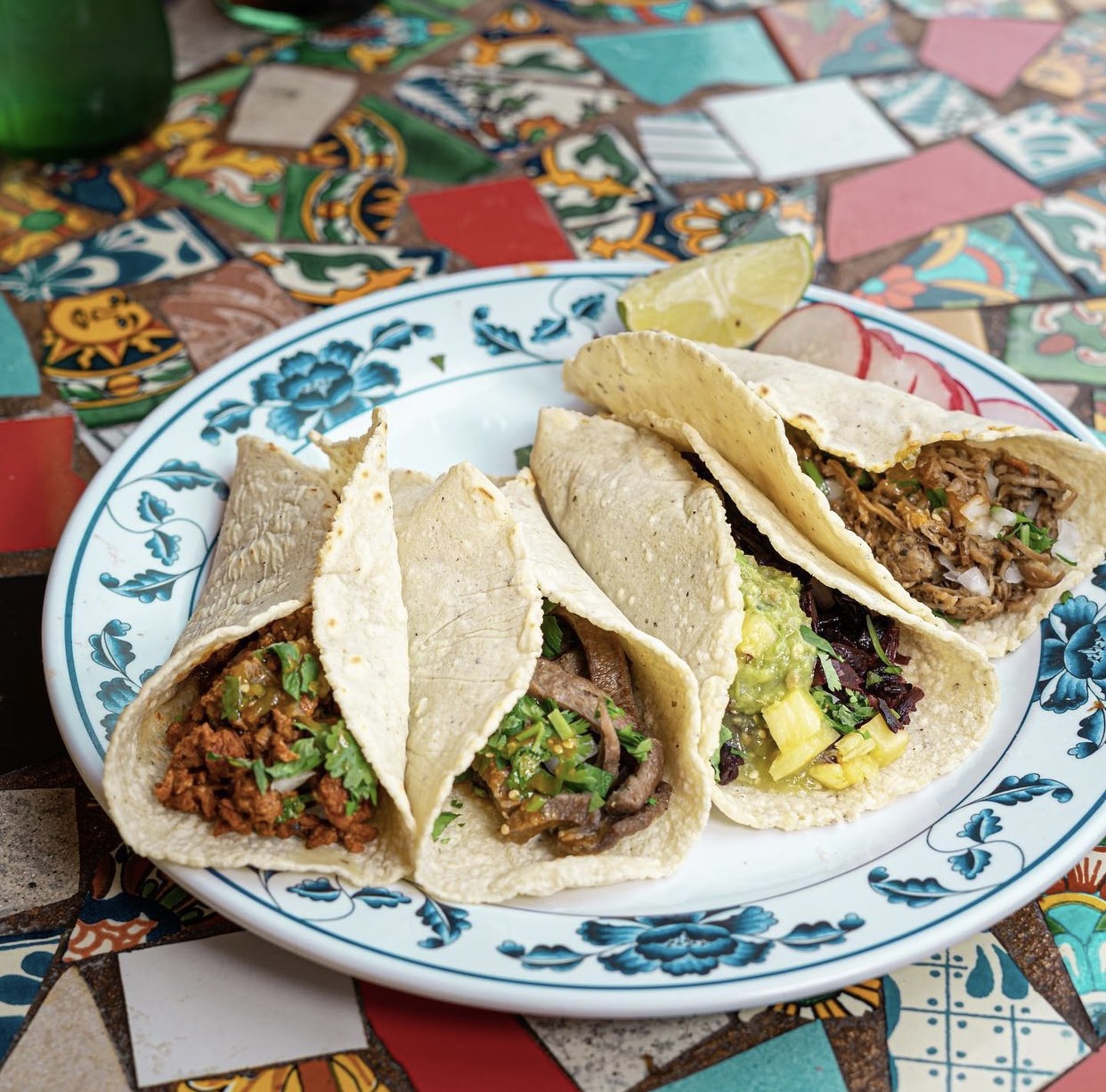 We’re not sure how, but hibiscus petals—the kind you’re used to infused in tea—actually make for an incredible vegan taco filling. When seasoned, cooked, and marinated, they take on a pleasantly chewy, meaty texture. They’re somewhat common at independently owned taquerias, but they’re also simple to make at home.
How to make them: Hibiscus Tacos by Brown Sugar & Vanilla
Where to find them: Vegan by El Zamorano, Costa Mesa, CA 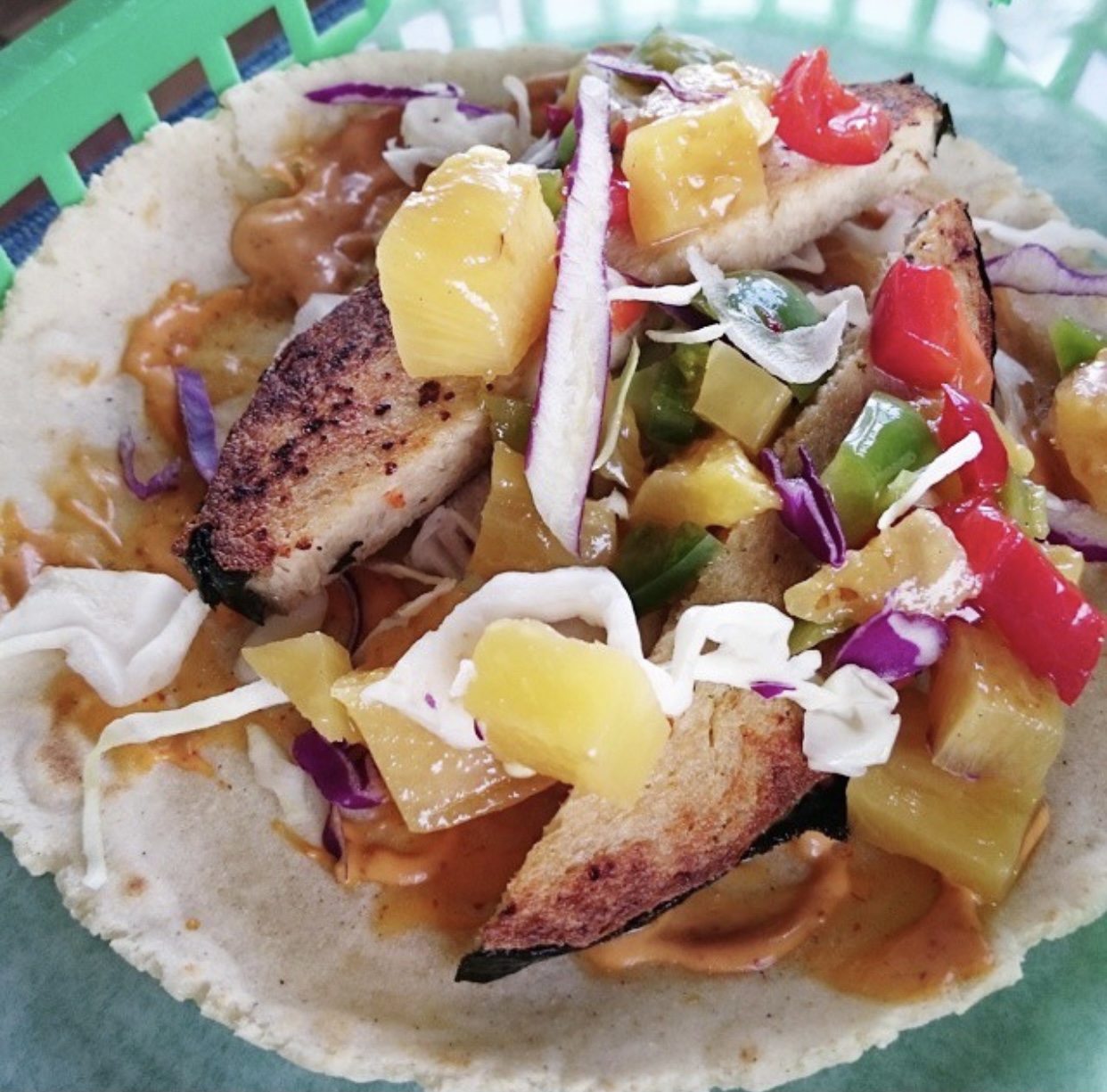 The innovation in vegan fish tacos has surprised us with each crispy, flaky bite. From expertly seasoned and fried tofu to nori-infused jackfruit, these Baja tacos don’t get enough credit.
How to make them: Vegan Fish Tacos by Dora’s Mexican Table
Where to find them: El Cantaro, Monterey, CA 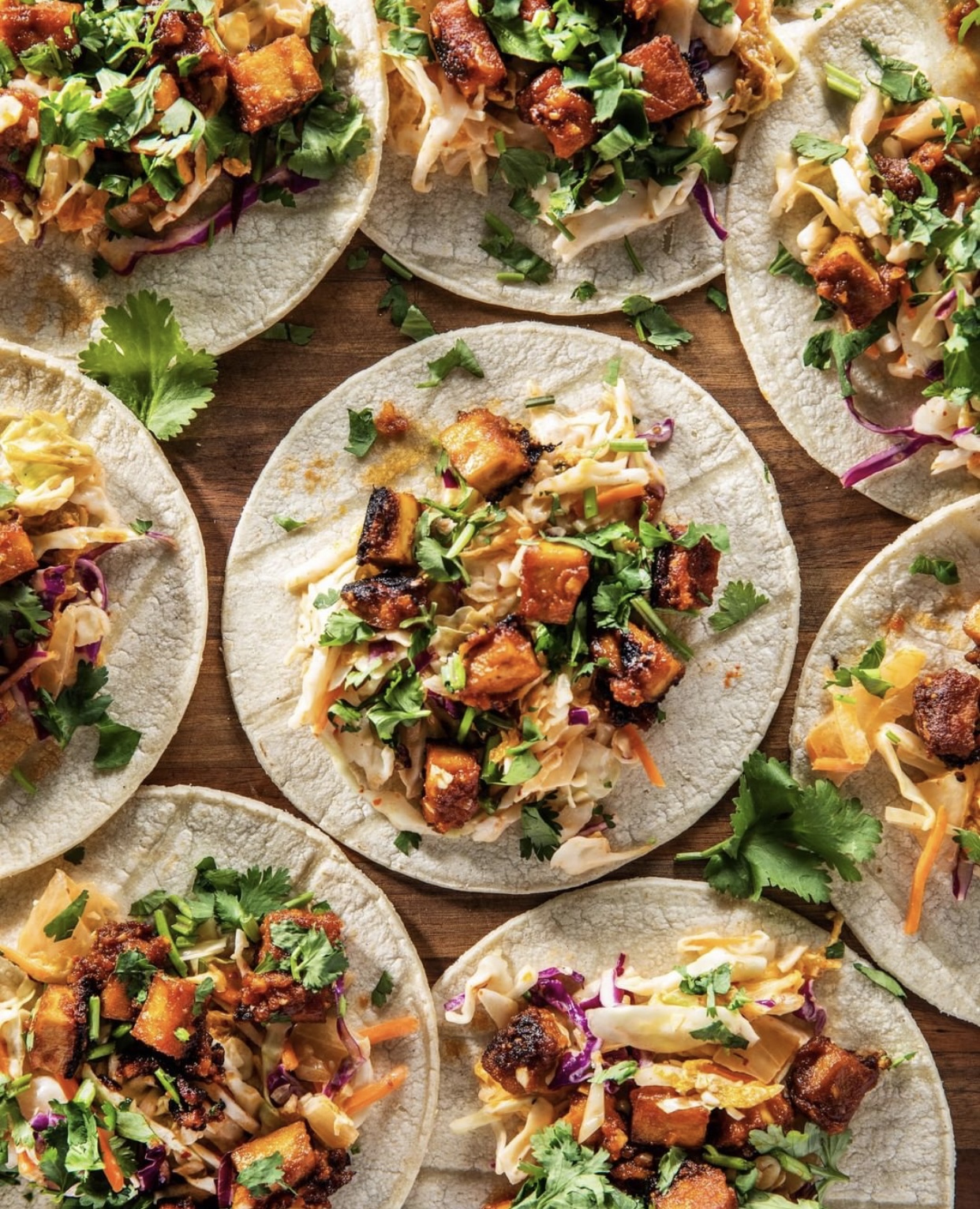 Coined by the San Antonio Taco Editor José Ralat, these tacos are a product of K-Mex, largely brought to popularity by celebrity chef Roy Choi. Today, you can find tacos in many Korean fusion restaurants stuffed with tofu, kimchi, and cilantro.
How to make them: Korean Tofu Tacos by Purple Carrot
Where to find them: Seabirds Kitchen, Long Beach, CA 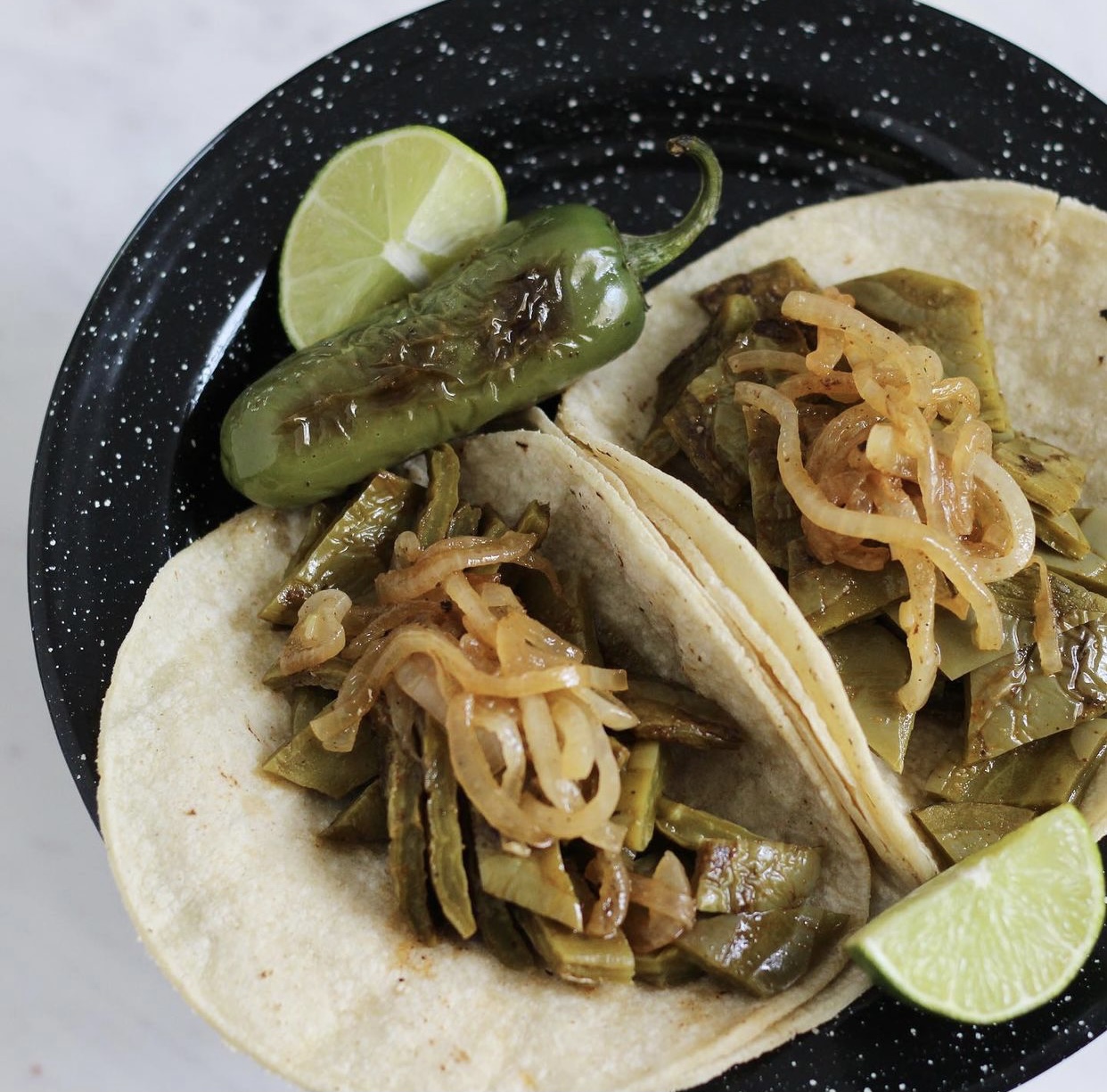 Nopales is a Mexican dish of stewed cactus, and if you haven’t had them before, it will quickly become one of your favorite taco fillings. Who knew those prickly plants could taste so good?
How to make them: Tacos de Nopales by Hispanic Kitchen
Where to find them: Succulent Vegan Tacos, Nashville, TN 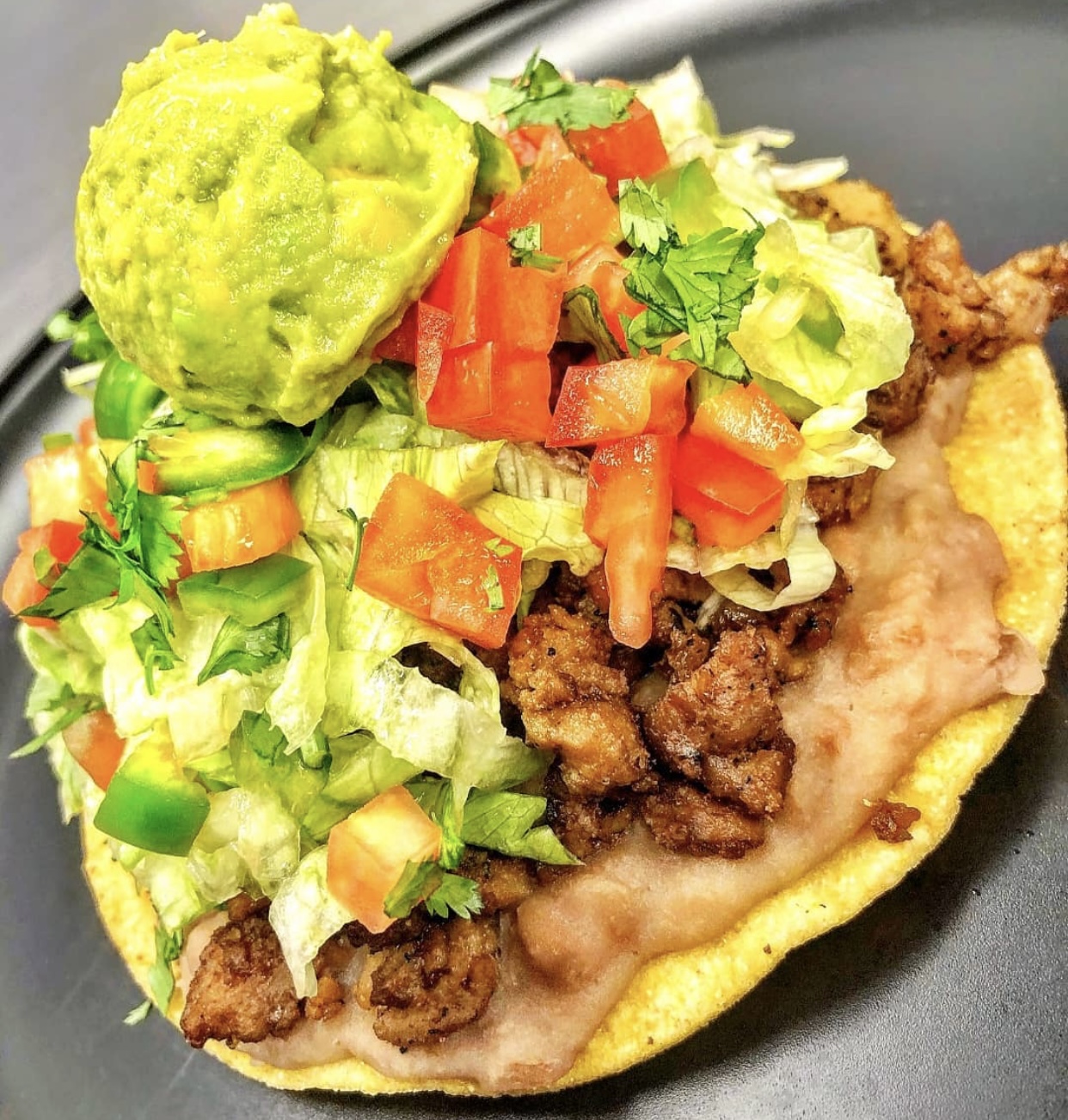 Pollo asado packs a deep flavor combination of citrus, smoke, and spice. It’s marinated then grilled, and while different chefs may have slightly different spice ratios, this chicken-based taco filling is easy to identify thanks to its vibrant red-orange sheen. The plant-based version keeps the flavor and simply swaps out the chicken for a vegan protein alternative such as seitan or TVP (textured vegetable protein).
How to make them: Vegan Chicken Tacos by Más Vegan
Where to find them: Cena Vegan, Los Angeles, CA 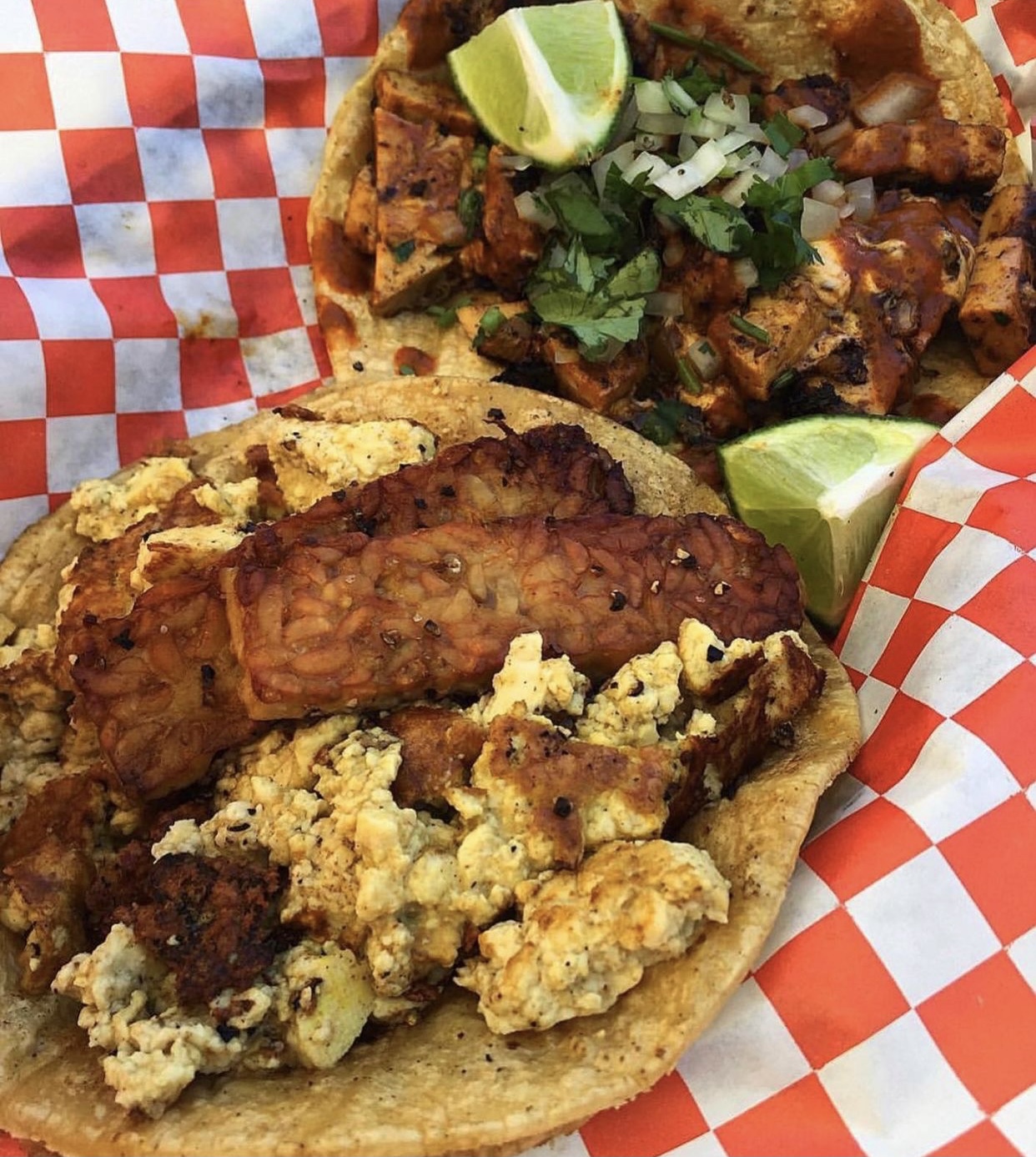 Don’t limit yourself—breakfast tacos can be eaten any time of day. Typically, these are characterized with the addition of vegan egg and often chorizo or sausage. Like other tacos, the sky’s the limit after that—load up a hot flour or corn tortilla with scrambled JUST Egg, beans, and salsa, or top seasoned crumbled tofu with vegan sausage and pico de gallo.
How to make them: Vegan Migas Breakfast Tacos by The Nut-Free Vegan
Where to find them: The Vegan Nom, Austin, TX