Be it the festive season or a summer’s day on the beach, there is one particular beverage that people love to celebrate with. And no, it’s not alcoholic (unless you add a touch of rum or vodka). It is, of course, Coca-Cola.

Referred to widely as just Coke, Coca-Cola’s carbonated caramel-colored liquid was first developed in the late 1880s by a US pharmacist. And, by the turn of the century, Americans had developed a real taste for the beverage, drinking hundreds of thousands of gallons per year. Now, the rest of the world has joined in, too, and today, the company is worth more than $274 billion. Its main rival, PepsiCo (which, of course, produces a very similar carbonated drink called Pepsi) is worth more than $252 billion.

However, while our tastebuds may love Coke, this insatiable appetite isn’t always great for the planet. Here, we take a closer look at some of the reasons why. But first, let’s examine the beverage itself: Is Coke vegan? And is it healthy?

The main ingredients in Coca-Cola are carbonated water, sugar, food coloring (to get that signature brown look), phosphoric acid, and caffeine. None of these are derived from animals, so this means that Coke is vegan. Pepsi’s ingredient list is very similar, with no animal products, so Pepsi is also vegan.

But this hasn’t always been the case. While ingredient lists have largely remained the same, in the past, both Coca-Cola and PepsiCo engaged in animal testing, using animals like chimps and rats in taste tests. However, following pressure from animal-rights groups, both beverage companies agreed to stop funding these experiments back in 2007.

Most of us know that Coke is not a health drink. One can of Coca-Cola contains around 35 grams of sugar, while one can of Pepsi contains around 29 grams. Drinking a can every now and again isn’t going to do much harm, but regular sugary soda consumption is linked with a higher risk of serious chronic conditions, like type 2 diabetes and heart disease.

However, both Pepsi and Coca-Cola offer several varieties of their signature beverages without sugar, like PepsiMax, Diet Pepsi, Coca-Cola Zero Sugar, and Diet Coke.

According to Katherine Zaratsky, RD, LD, drinking diet versions of these drinks isn’t likely to do much harm. While some reports have linked artificial sweeteners, like aspartame, to higher cancer risk, there is no conclusive evidence to support this for most people. (People with phenylketonuria, a genetic disorder that means they can’t break down phenylalanine, should avoid aspartame.)

That said, sugar-free Coke isn’t a source of nutrition, and there are much healthier beverage options on the market. “Diet soda isn’t a health drink or a silver bullet for weight loss,” Zaratsky notes for the Mayo Clinic. “Although switching from regular soda to diet soda may save you calories, it’s not yet clear if it’s effective for preventing obesity and related health problems in the long term.”

Is Coke bad for the environment?

Regardless of the health risks, Coke is still a beloved beverage. But there’s another key problem with its mass production: plastic. 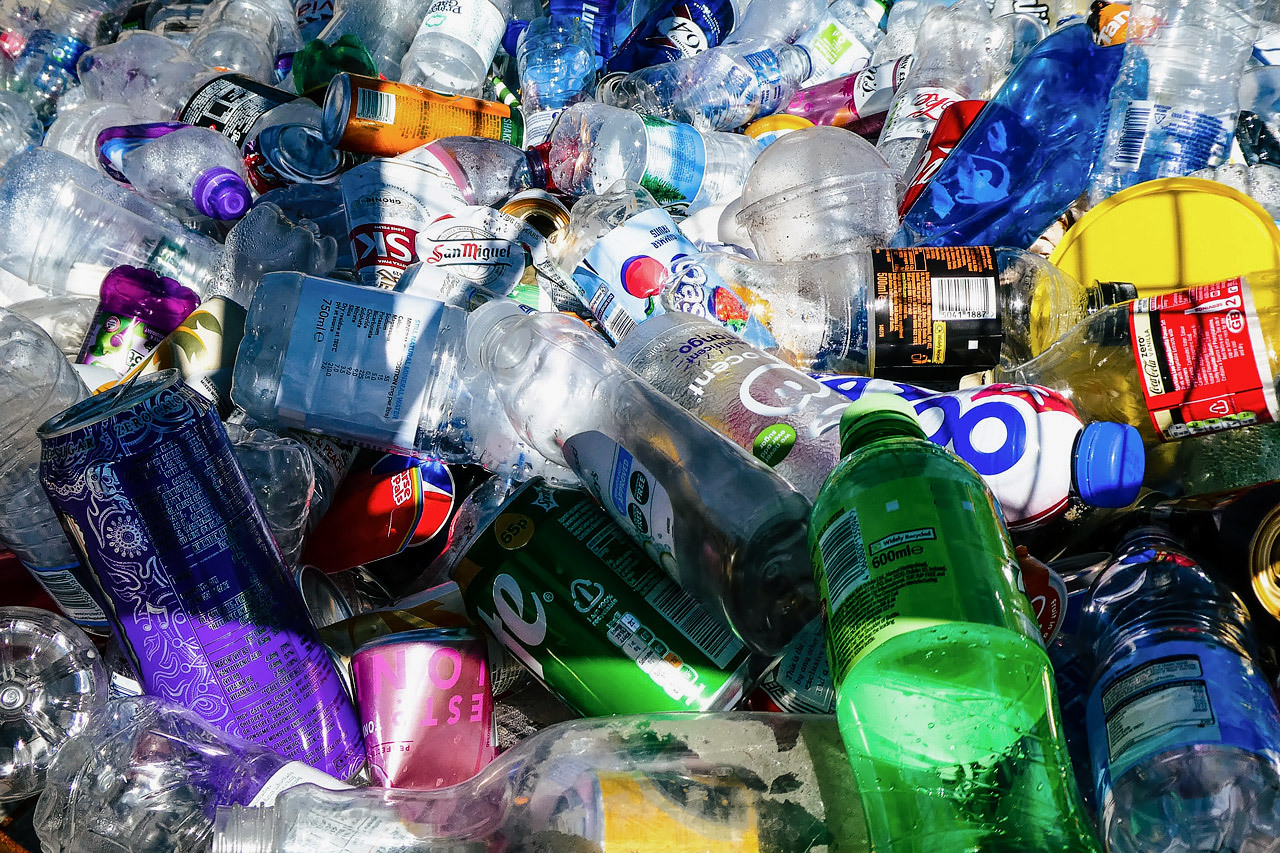 While Coca-Cola and PepsiCo do package many of their products in aluminum cans, which are easier to recycle than plastic, both also produce billions of plastic bottles every year. In fact, the beverage giants, which each produce a range of drinks and food products in addition to Coke, are two of the biggest plastic polluters on the planet.

Coca-Cola has been named the number one plastic polluting company by the Changing Markets Foundation’s Talking Trash initiative, while PepsiCo is in third place. According to another report by NGO Tearfund in 2020, in just six countries (China, India, the Philippines, Brazil, Mexico, and Nigeria), Coca-Cola is responsible for around 200,000 tons of plastic pollution. All of which is either burned, contributing to greenhouse gas emissions, or dumped, contributing to environmental pollution.

Research suggests that the act of simply opening a plastic bottle releases microplastics into the environment. From the oceans to our bodies, these tiny fragments of plastic are everywhere, and they’re dangerous. 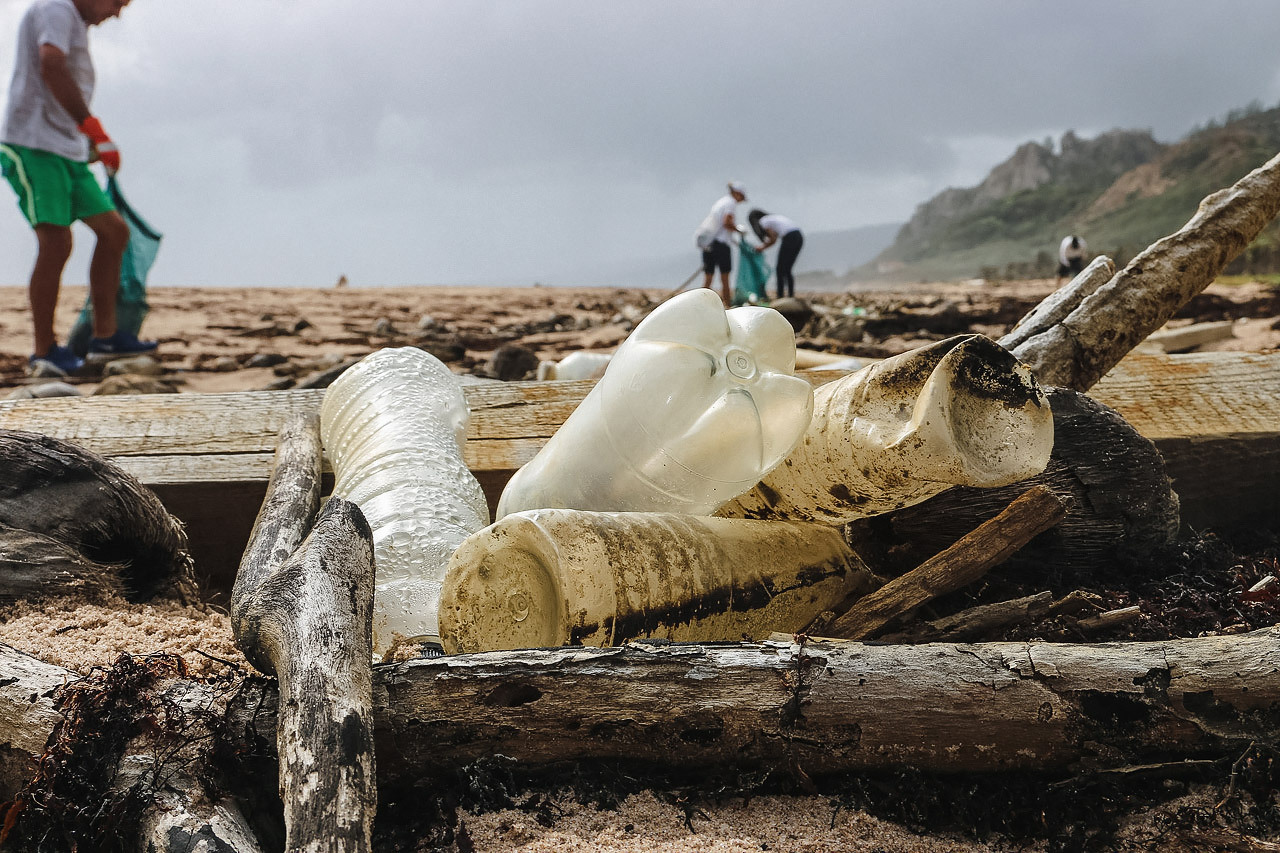 According to World Animal Protection, many animals, like seals, get sick from eating microplastics, and it can also impact their reproductive systems. But they also pose a risk to us. Studies indicate the average person consumes around one credit card’s worth of microplastics a week. Research into the health risk is still ongoing, but so far, some studies have suggested that consuming microplastics could lead to chronic inflammation, cell damage, and oxidative stress.

As well as environmental issues, Coca-Cola has also been associated with human rights violations on several occasions. Last year, for example, workers in the Phillippines protested against the company after they worked throughout the pandemic, but were allegedly refused fair wage increases, according to the International Union of Food, Agricultural, Hotel, Restaurant, Catering, Tourism, Tobacco and Allied Workers Associations (IUF) Asia-Pacific. 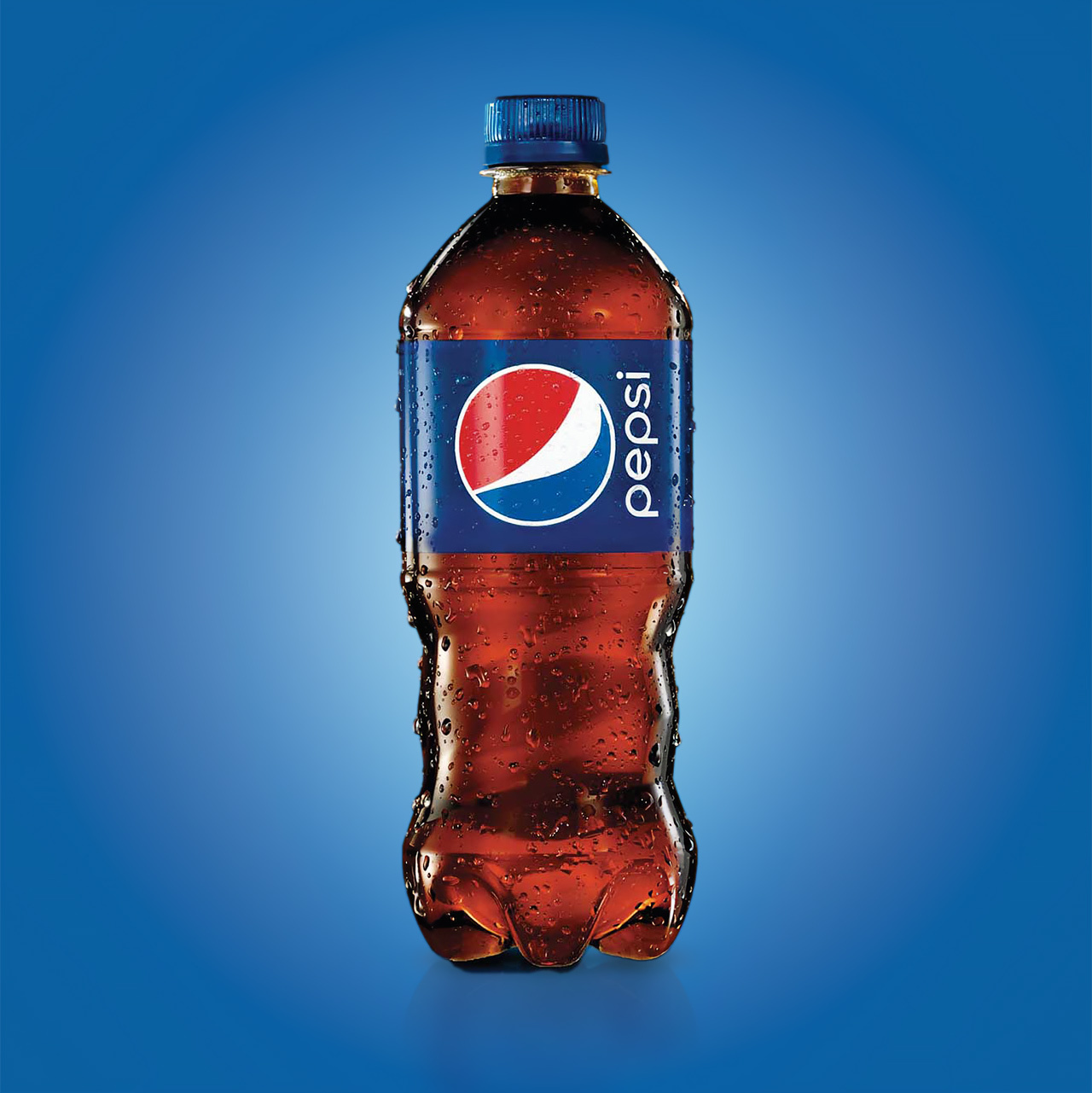 In the past, PepsiCo has also been associated with human rights issues. In 2016, the Business & Human Rights Resource Center reported that PepsiCo’s products had been linked to child labor in Indonesia, as well as “unethically low wages and worker exploitation.” In the same year, the publication also reported accusations of human rights violations and anti-trade union practices by PepsiCo in West Bengal, India.

Both PepsiCo and Coca-Cola claim to now have strict human rights policies and commitments, as well as long-term environmental goals. Both have pledged to reduce single-use packaging, for example, and up their use of recycled materials.

But ocean conservation nonprofit Oceana maintains that neither is doing enough. In a May 2022 report, it claimed that even if recycled plastic targets are met, more than 33 billion plastic bottles will still enter the world’s waterways. “Unless highly improbable swift and significant improvements in bottle collection systems are made globally, the five beverage brands will not be able to meet their recycled content targets by 2025,” the report adds.

However, if you love the taste of Coke, but would prefer to avoid beverage giants like Coca-Cola and PepsiCo, you’re not totally out of options. There are a few drink brands out there that offer more environmentally friendly alternatives, with a very similar taste. Here are five brands to look out for next time you get a craving for the caramel-colored fizz. And, of course, they’re vegan, too. 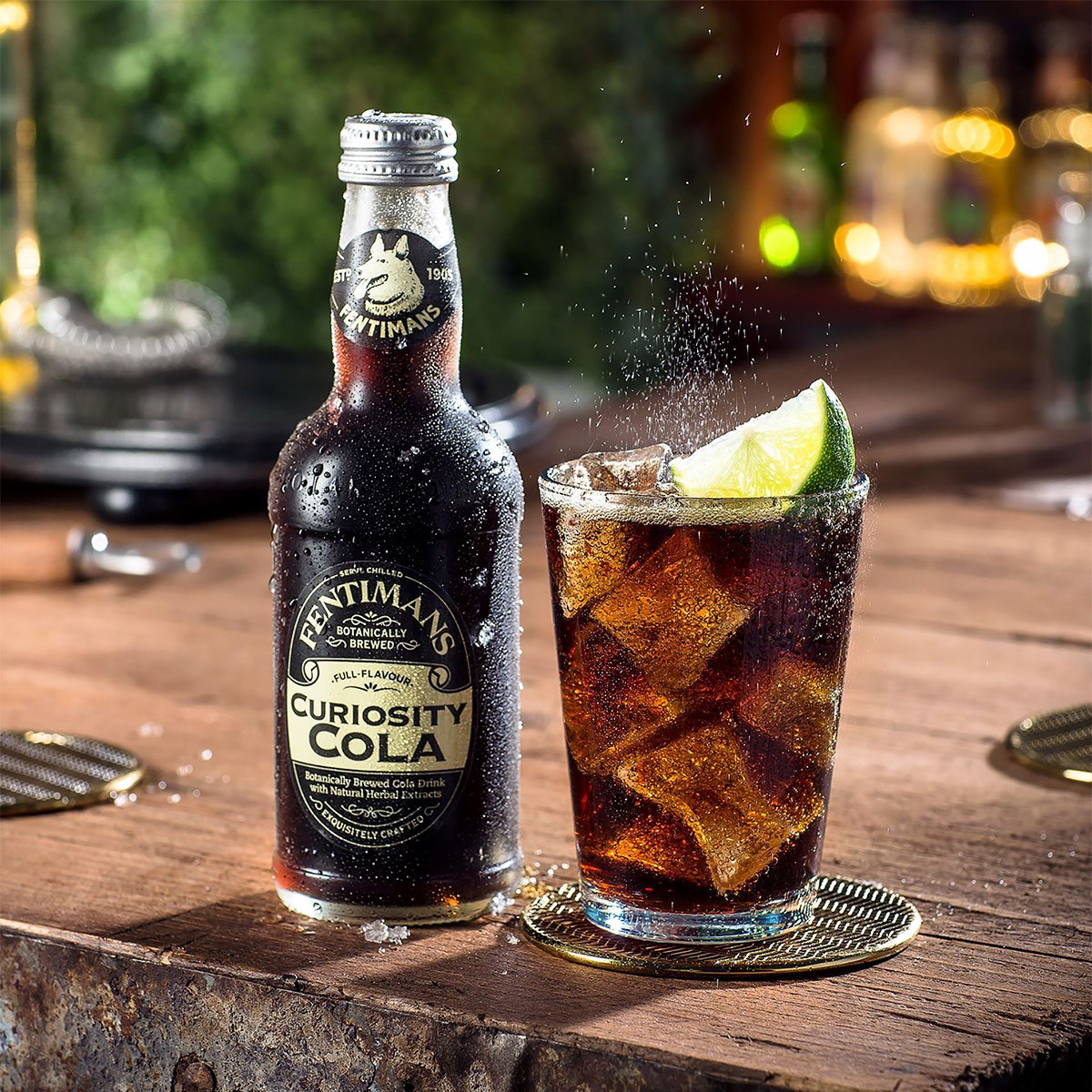 Founded in England back in the early 1900s, Fentimans has been around for some time and is known for its specialty: botanical brewing. Essentially, the company infuses botanical ingredients into simmering water, in a bid to extract their natural flavors. For this reason, its Curiosity Cola isn’t exactly like Coca-Cola or Pepsi, which rely on more artificial ingredients, but it is still sweet, and arguably, more flavorful. According to the brand, one of the main plant ingredients in its Curiosity Cola, which is packaged in glass bottles, is cinnamon, which is added for “depth of flavor.”
Check it out 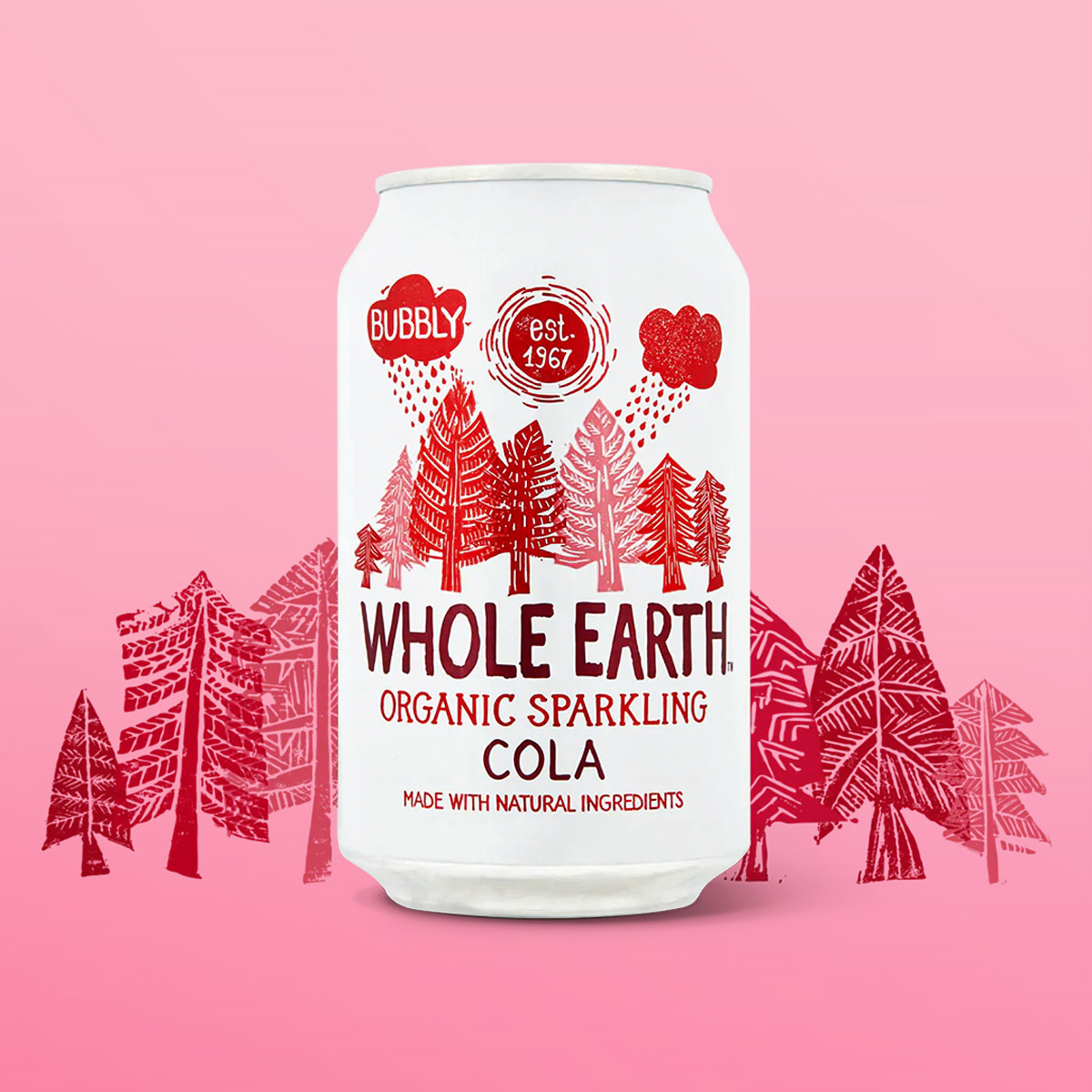 Whole Earth has its roots in 1960s London, when two brothers, named Craig and Gregory Sams, opened a vegetarian restaurant. This led to the creation of Whole Earth, and the brand is still going strong today, specializing in organic food and beverages. Its range of drinks (all sold in aluminum cans) includes Organic Sparkling Cola. The beverage gives you the same fizzy satisfaction as Coca-Cola or Pepsi, only it’s made with natural ingredients.
Check it out 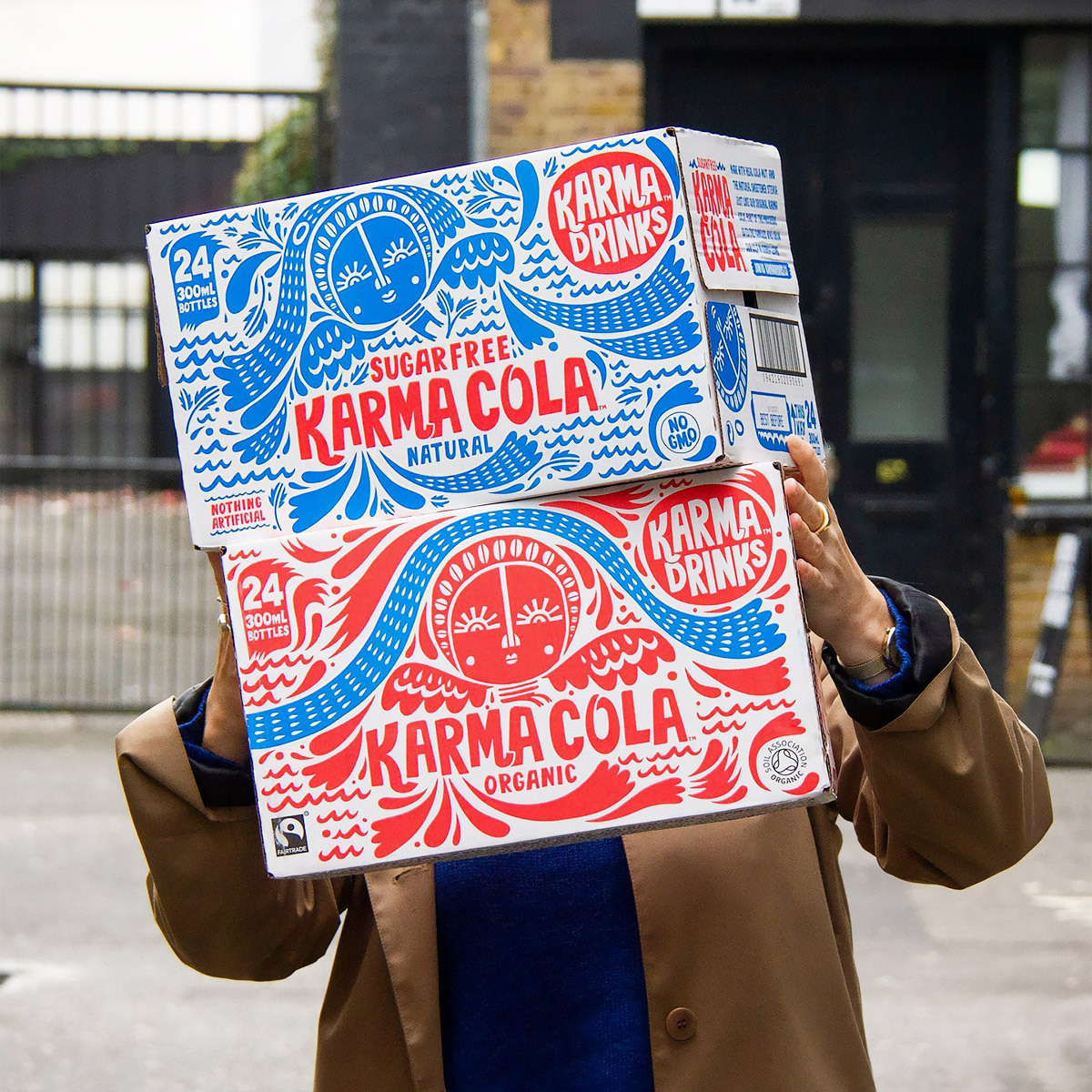 The name Coca-Cola wasn’t pulled out of a hat. It was inspired by the kola nut, which comes from the West African kola tree. The nuts no longer feature in Coca-Cola’s recipe, but Karma Drinks still thinks it’s unfair that West Africa has seen little return on its part in inspiring the incredibly profitable beverage. That’s why the brand, which is a certified B Corporation and packages its beverages in glass bottles, created Karma Cola using kola nuts, to give back to the people of West Africa.
Check it out 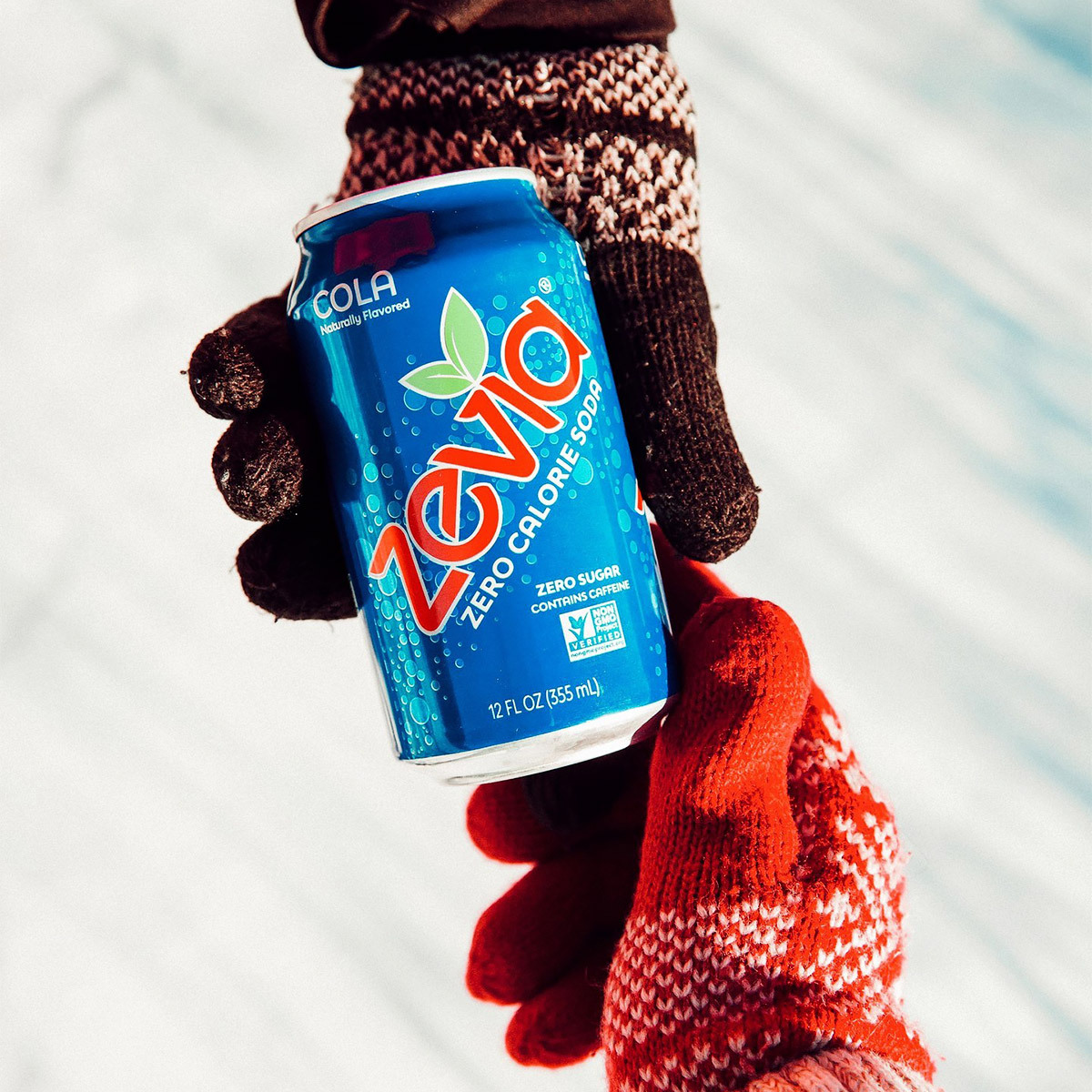 California-based Zevia is also a certified B Corporation, which means it takes its commitment to sustainability seriously. All of its beverages are packaged in aluminum cans and sweetened with stevia, a plant-based sugar substitute. It offers several different soda options, including Cola, Caffeine Free Cola, and Cherry Cola, all of which will satisfy your cravings for a fizzy, tasty soda hit, without the excess sugar and plastic.
Check it out 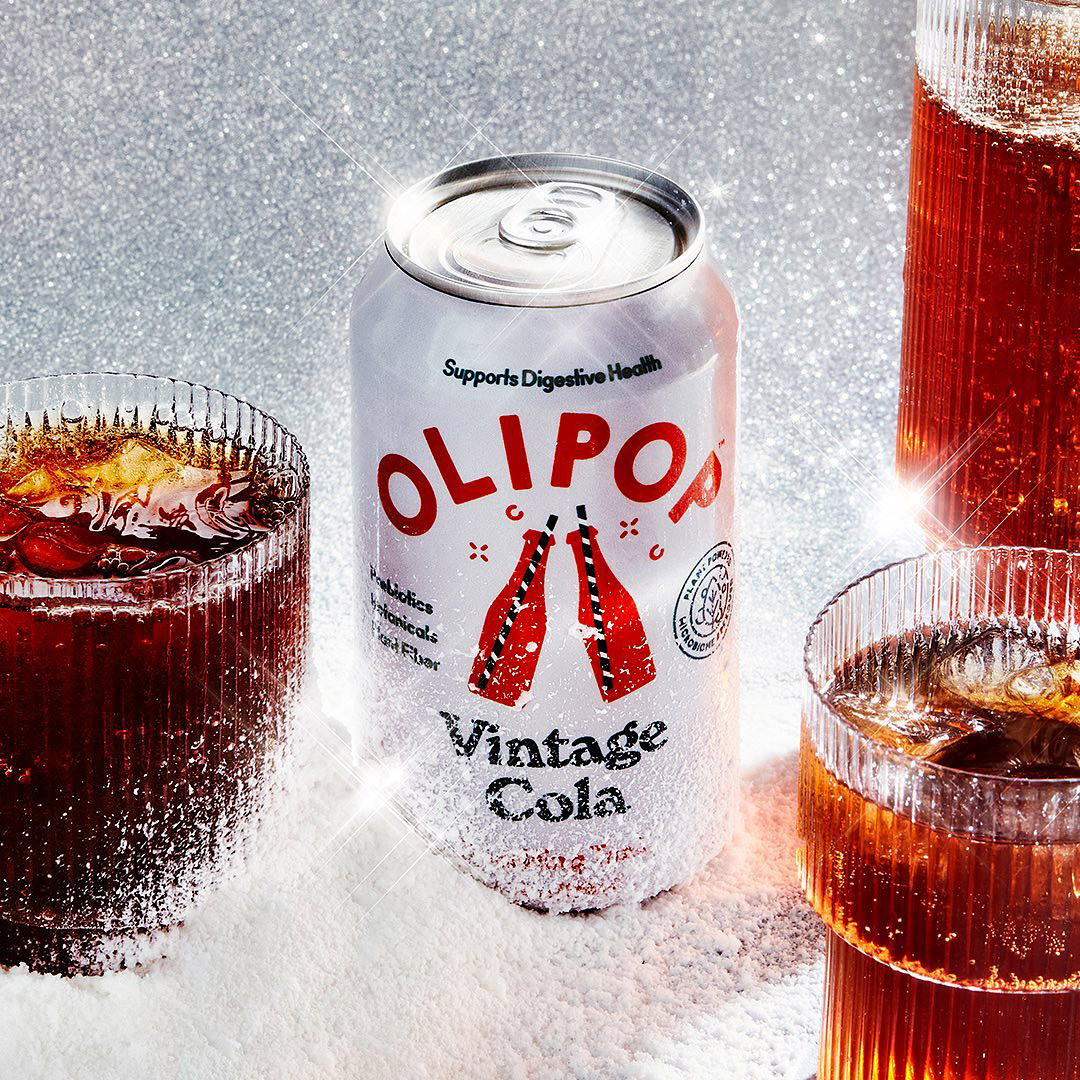 According to Olipop, it offers a “new kind of soda,” which actually prioritizes health. Its products, which include aluminum cans of Vintage Cola and Cherry Cola, are actually tonics, which were created with the help of a team of health experts. Unlike other fizzy drinks, they contain prebiotics and fiber, both of which are known to benefit gut health.
Check it out

For more on vegan beverages, read: