Ham has been eaten for so long by so many different cultures, it is difficult to say exactly where its origins lie. However, one widely accepted narrative is that it was first consumed in Jinhua, a small city in eastern China. It’s claimed that Marco Polo, a merchant and adventurer from Venice, was so impressed by the ham when he visited China in the 13th century, he brought the techniques for dry-curing the meat home with him to Europe.

But whatever its origins, there is no denying that ham is one of the most popular meats globally. From Jinhua ham to Italian prosciutto to the American holiday roast, humans all over the world love to eat meat taken from the back legs of a pig. In the US, on average, one person eats more than 66 pounds of pork per capita, which includes ham, as well as other pig meat products, like sausage and bacon.

But while many take great pleasure from eating ham, factory farms—where most pigs are raised—cannot be described with the same level of joy. Millions of pigs are packed in so tightly, they are unable to express their natural behaviors. These facilities are also so filthy, they are breeding grounds for disease. Plus, they are detrimental to the environment.

But, for those who love ham and hate the way it’s produced, there is an alternative: vegan ham. Here, we’ve gathered all the best vegan ham brands on the market, as well as some easy recipes if you want to make it yourself. But first, let’s take a closer look at the pig farming industry, as well as what vegan ham actually is.

Every year, around 1.5 billion pigs are killed for food. Most of them are born and raised on industrial factory farms. In the US, one concentrated animal feeding operation (CAFO) can hold around 2,500 pigs. In these facilities, they are packed in so tightly, they cannot express their natural behaviors.

Smithfield Foods, one of the biggest pork producers in the US, was recently accused of keeping pigs in horrific conditions. In 2017, investigators reported finding piles of dead piglets on one farm, as well as animals that were starving or unable to walk. (The activists who entered the farm chose to save two piglets and were recently taken to court by Smithfield for burglary. They were acquitted.) 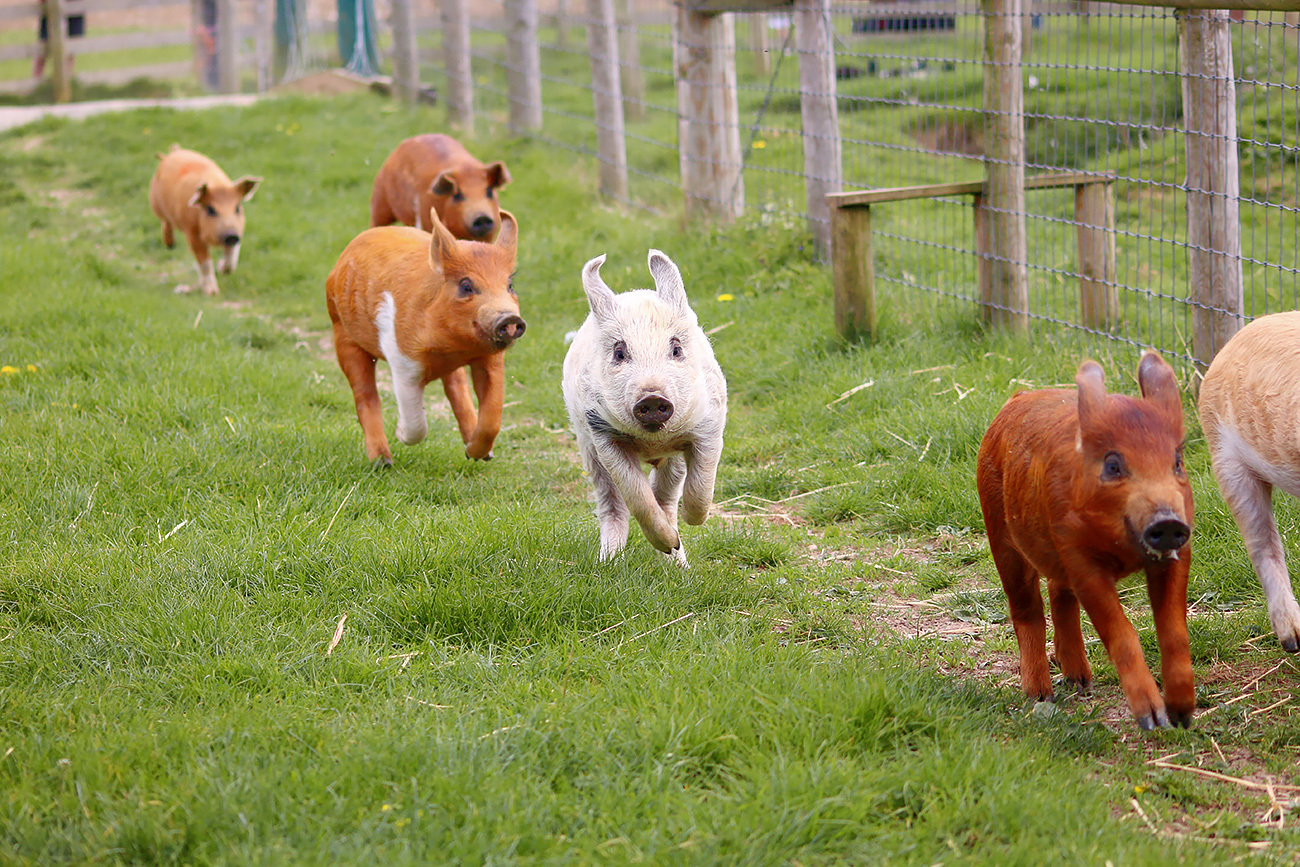 But Smithfield isn’t alone. Cruel practices are common on farms around the world. Gestation crates, for example, are widely used. These are small metal enclosures, which offer the animals no room to turn around, where pregnant pigs are kept to stop them from being aggressive towards other animals. In 2007, Smithfield pledged to phase out the crates, but when investigators entered the farm in 2017, they found them still in use.

Animal welfare issues aside, pig farms are also a threat to the environment. Just last year, some of Spain’s industrial pig farms were linked to the collapse of the Mar Menor lagoon, the biggest saltwater lagoon in Europe. Fish were suffocated, claim scientists, due to years of nitrogen runoffs from surrounding pig farms. Waste from the farms caused a toxic algae bloom, which poisoned the lagoon and destroyed its ecosystems.

Pig farms are also a threat to human health, in a few different ways. Enormous manure pits pollute the air and water, presenting a major threat to life. In North Carolina, the number one US state for pork production, studies suggest that in communities with a lot of pig farms, the risk of kidney disease, sepsis, asthma, and bacterial infection is higher. 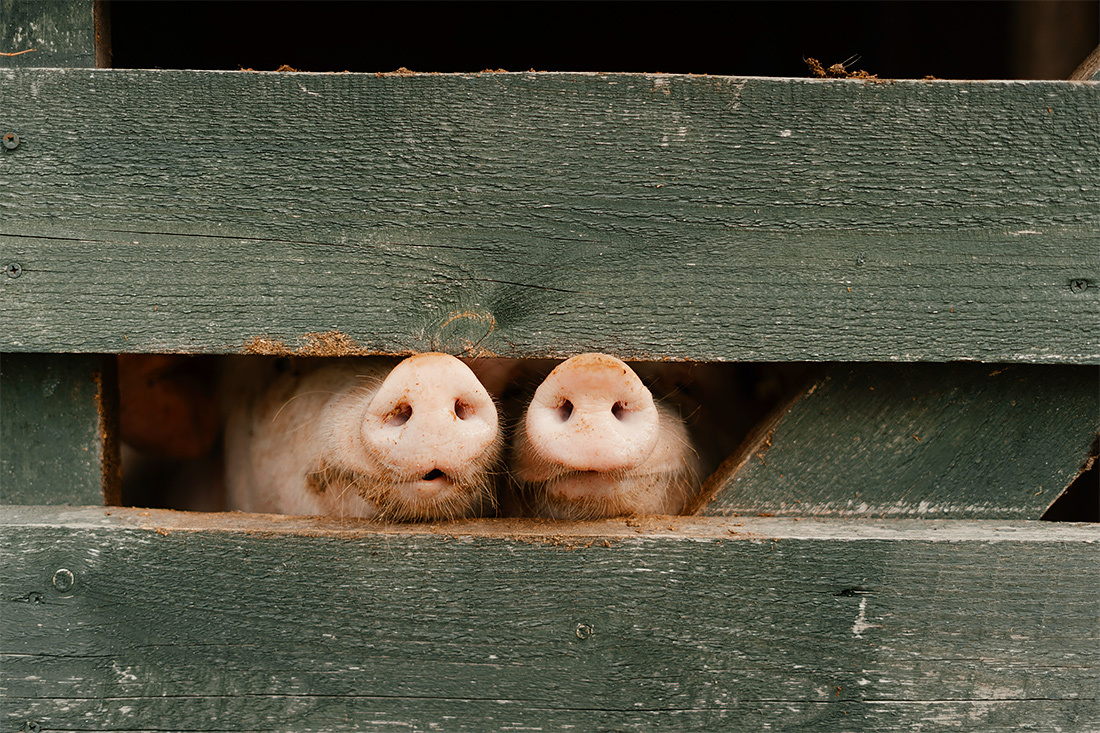 But pig farms don’t just threaten the health of nearby communities. According to some scientists, they are also a global pandemic risk. In 2020, pigs in China were found with a strain of influenza that could jump the species barrier from animals to humans. If it does, it will become a zoonotic disease. According to the World Health Organization, around 60 percent of emerging infectious diseases are zoonotic, which means they originate in animals.

What is vegan ham?

But if all this information has put you off your appetite for ham, we can help you get it back. Vegan ham looks, cooks, and tastes very similar to pig meat, but it’s totally plant-based. Whether you’re after sliced vegan ham or a vegan roast ham for the holiday table, it’s easy to find different options made from ingredients like seitan, tofu, beans, and more. They all have a similar texture and taste, only without the many environmental, ethical, and health issues that come from the real thing.

How healthy vegan ham is depends on a few factors, like what ingredients it uses or where you buy it from. Many vegan meats from brands, for example, are packed with protein, but they may not have a ton of vitamins and minerals. If you choose to make vegan ham at home with chickpeas or even watermelon (yes, seriously! More on that later), this may have more vitamins than some store-bought varieties.

That said, most vegan ham options are healthier than conventional ham varieties. Many sliced hams on the market, for example, are processed, and processed meat is linked with a number of health conditions, including an increased risk of heart disease. It is also a known carcinogen.

Earlier this year, one analysis, which examined 43 studies on the topic, concluded that plant-based meat products are healthier and better for the planet than their animal-based counterparts.

Whether you’re after a sliced sandwich filler or a big holiday roast, when it comes to vegan ham, these plant-based brands have you covered. 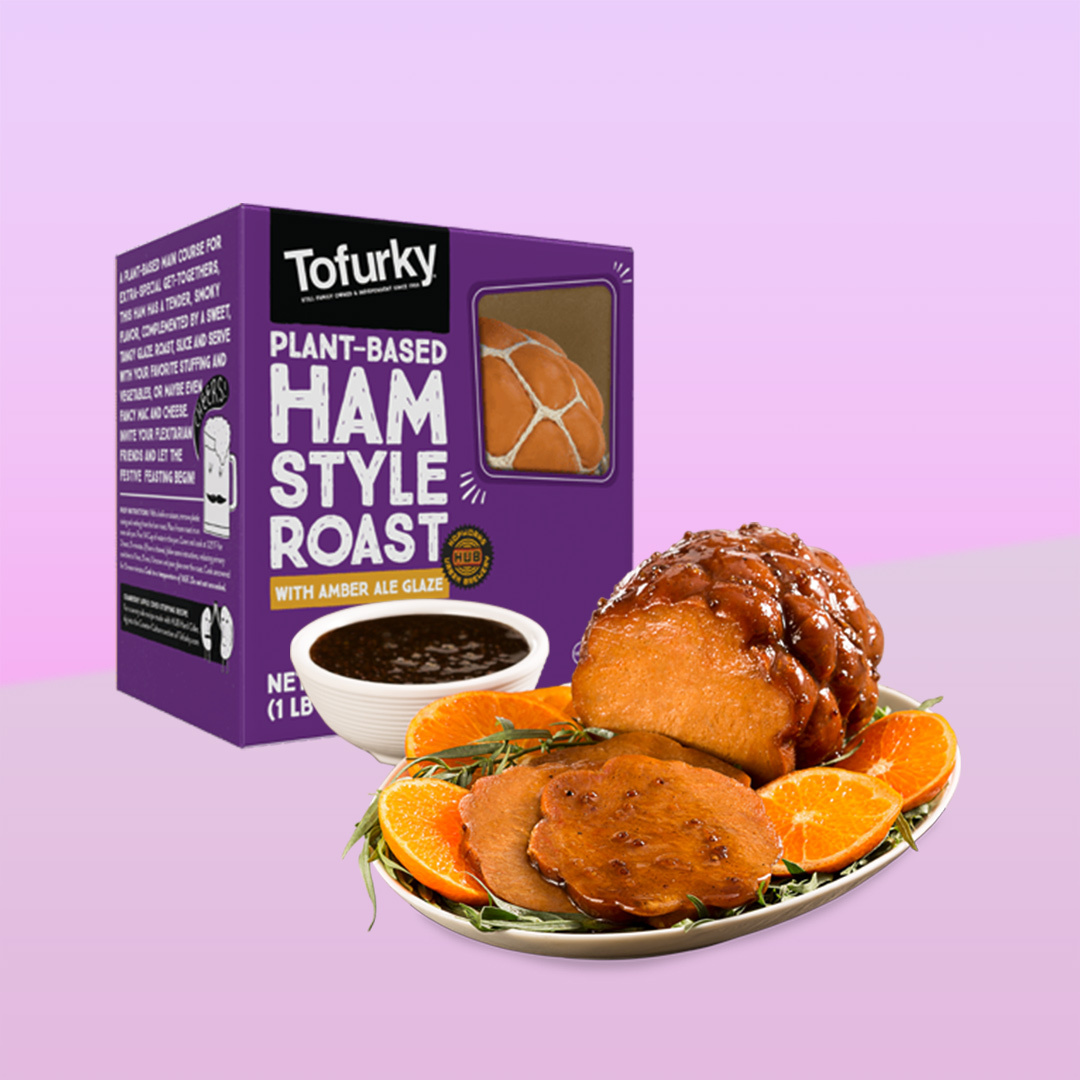 As the name implies, Tofurky (which was started back in the ‘90s) began its vegan meat journey by making vegan turkey products out of tofu. Since then, it has expanded its offering to include several different plant-based meats, including ham. If you’re after a table centerpiece, its Ham Roast with Amber Ale Glaze goes perfectly with roasted vegetables and stuffing. Or, if you’re looking to layer up a sandwich, it also offers Plant-Based Deli Slices in Smoked Ham Style.
Check it out 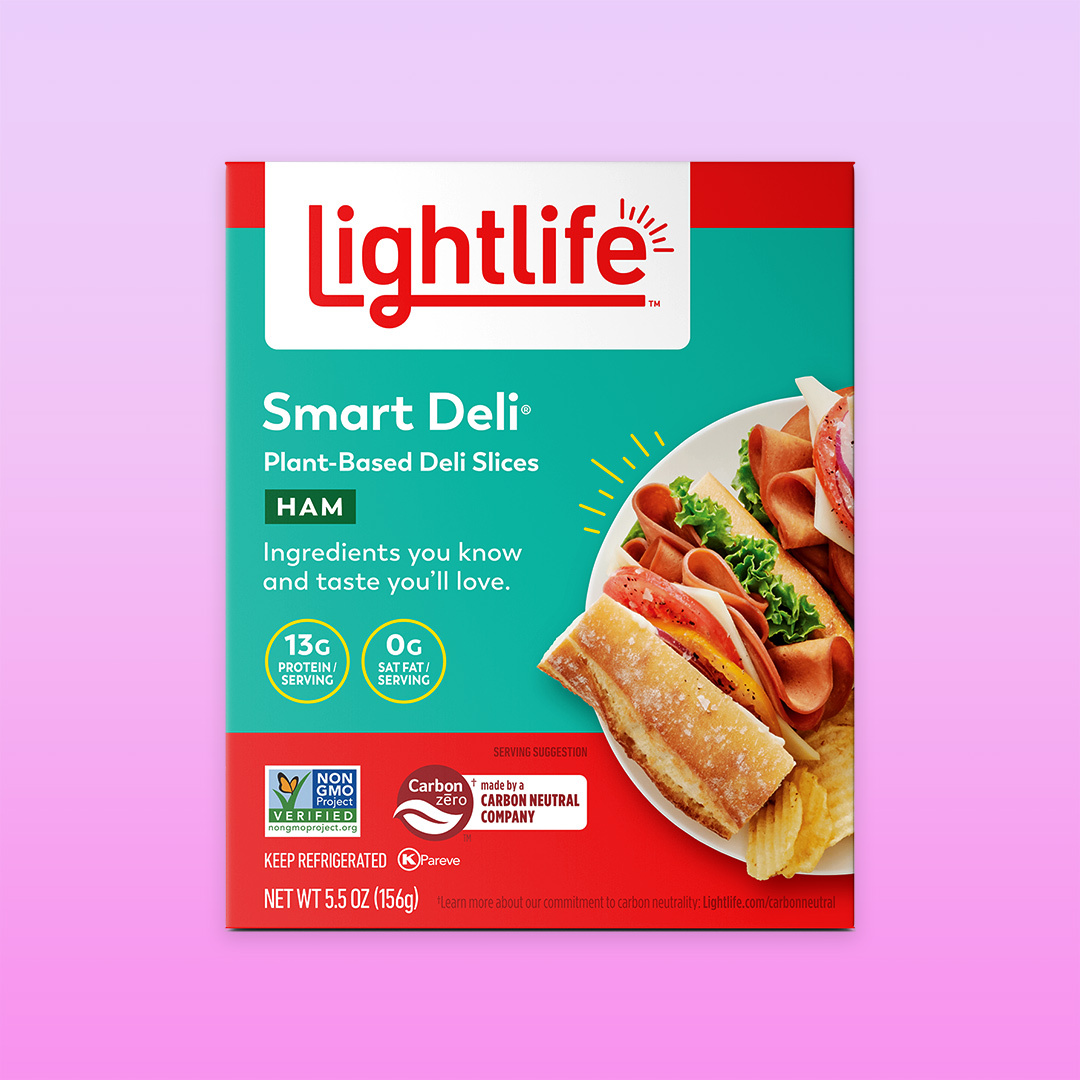 Massachusetts brand Lightlife has been making vegan meats since the ‘70s. It started with tempeh and has since expanded into a plant-based meat empire. (It’s now worth around $80 million!) As well as turkey, its Smart Deli slices range includes “sweet and smoky” ham, which packs in 13 grams of protein per serving.
Check it out 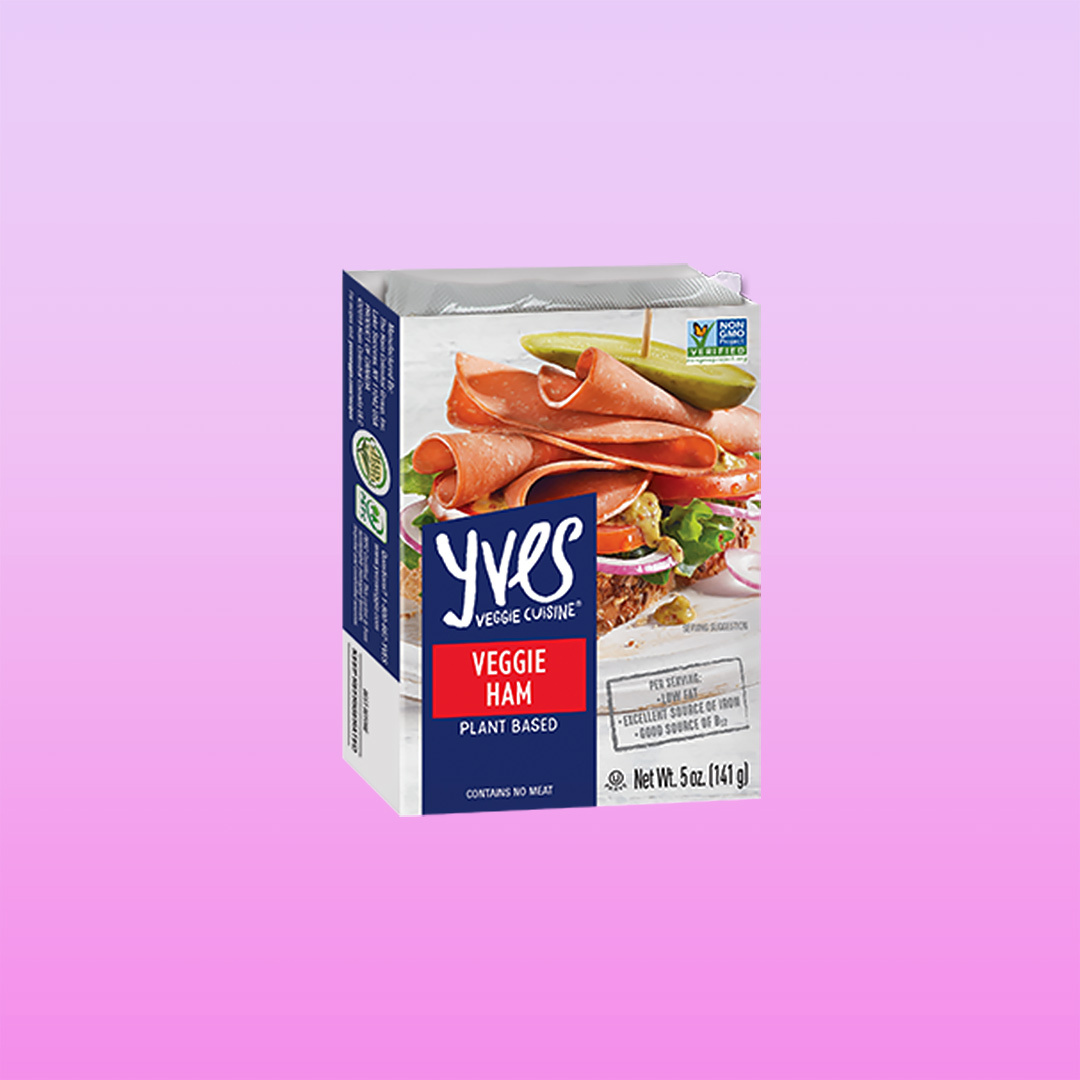 Another OG vegan and vegetarian meat brand, Canada-based Yves Veggie Cuisine has been around for more than 20 years. Its wide range of Deli Slices includes Veggie Ham, which is fortified with vitamin B12. The vegan meat product is also a source of iron, vitamin C, and protein.
Check it out 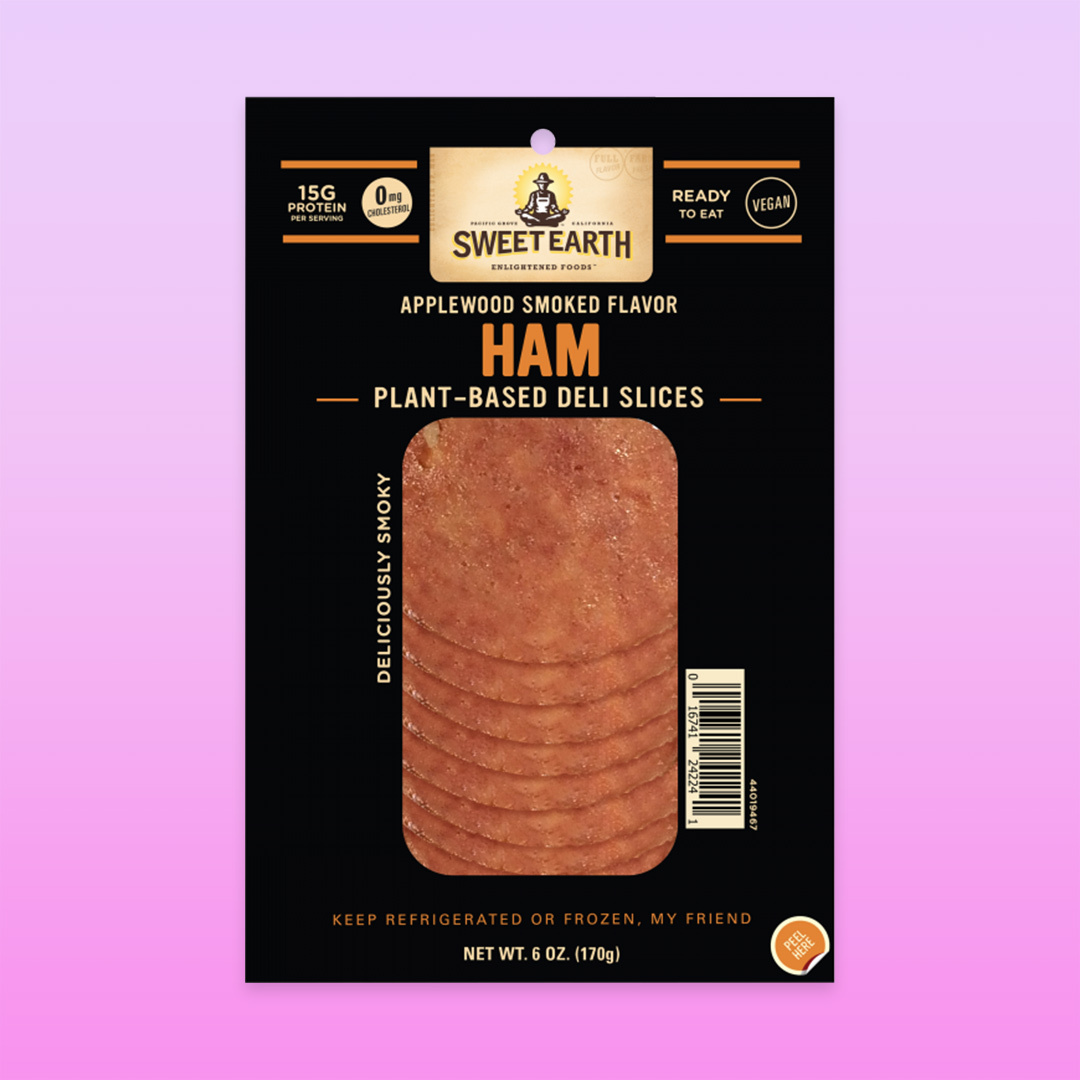 California brand Sweet Earth Foods has been around since 2011 but was acquired by Nestlé in 2017. Its 30-strong product range includes Applewood Smoked Flavor Ham, which is made with vital wheat gluten (the basis of seitan). The realistic-looking meat contains 15 grams of protein per serving and works well in everything from sandwiches to pasta (hello, vegan carbonara!).
Check it out 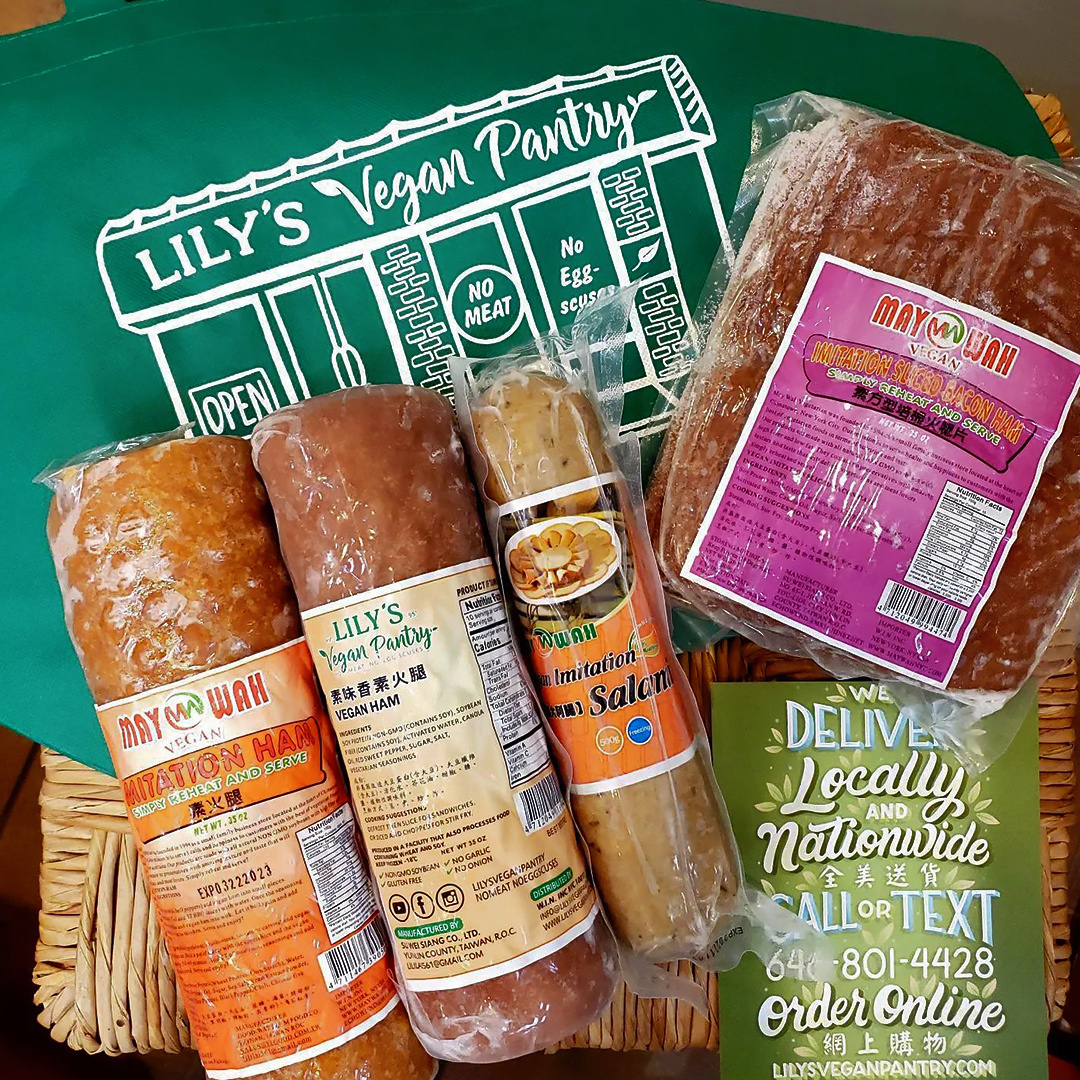 New York-based Lily’s Vegan Pantry, formerly known as May Wah Vegetarian Market, has been supplying the US with realistic, delicious vegan meats for more than 25 years. It was founded by Lee Mee, who missed Taiwan’s wide range of vegetarian mock meats when she moved to the US in 1979. Today, the brand offers a wide range of vegan products. And when it comes to ham, there are quite a few choices. Among them are Vegan Stewed Ham, Vegan Smoked Ham, and even Vegan Ham with Fried Rice.
Check it out 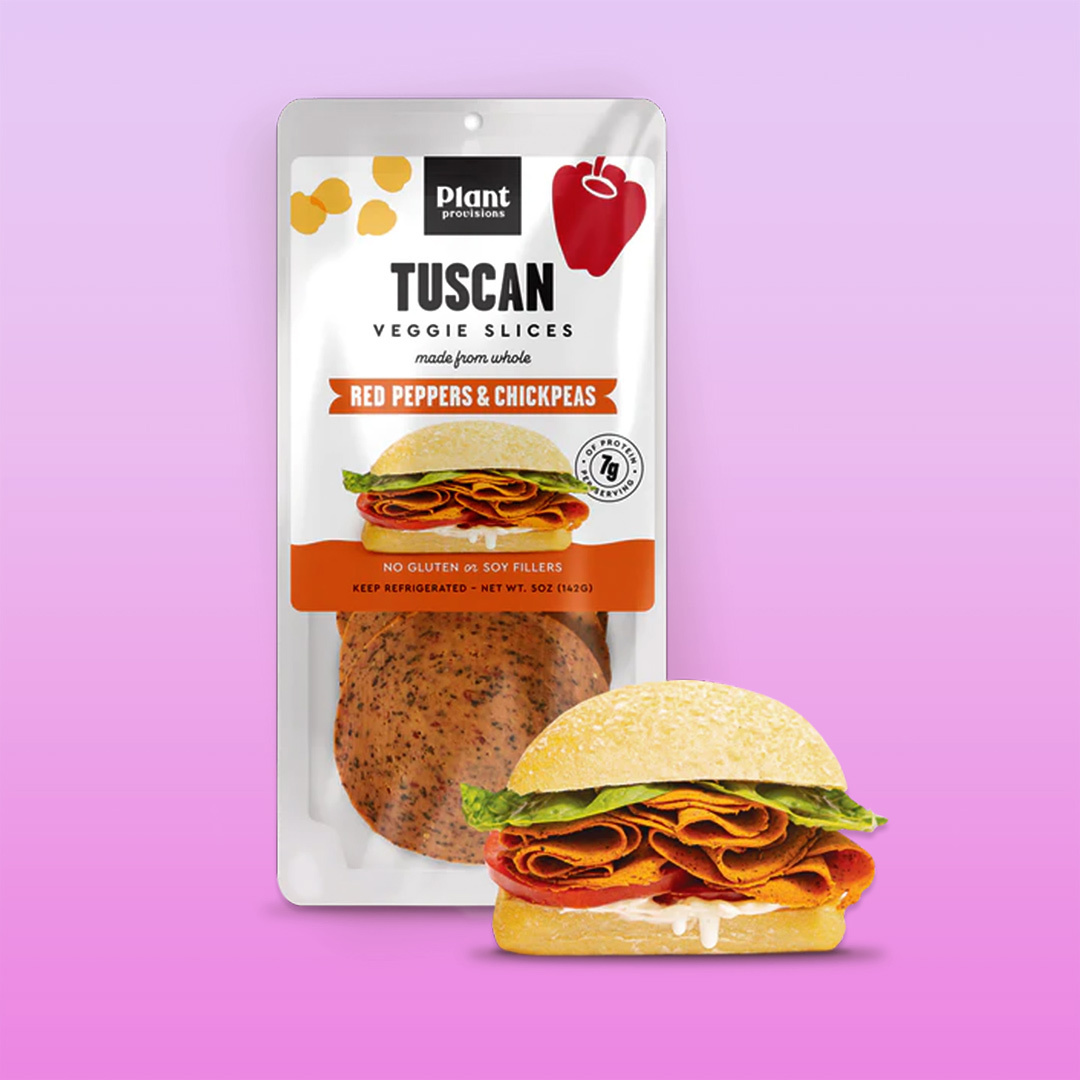 Unlike the other brands on this list, Plant Provisions is relatively new to the vegan meat world, but that doesn’t mean it lacks options. Its range of deli slices can fill the ham void in any sandwich or sub. Choose from Smokehouse, Tuscan (with red peppers), or if you’re in the mood for some spice, Chipotle Chili.
Check it out

If you feel like getting creative in the kitchen, you could try your hand at one of these recipes and make vegan ham at home, using everything from seitan to chickpeas. 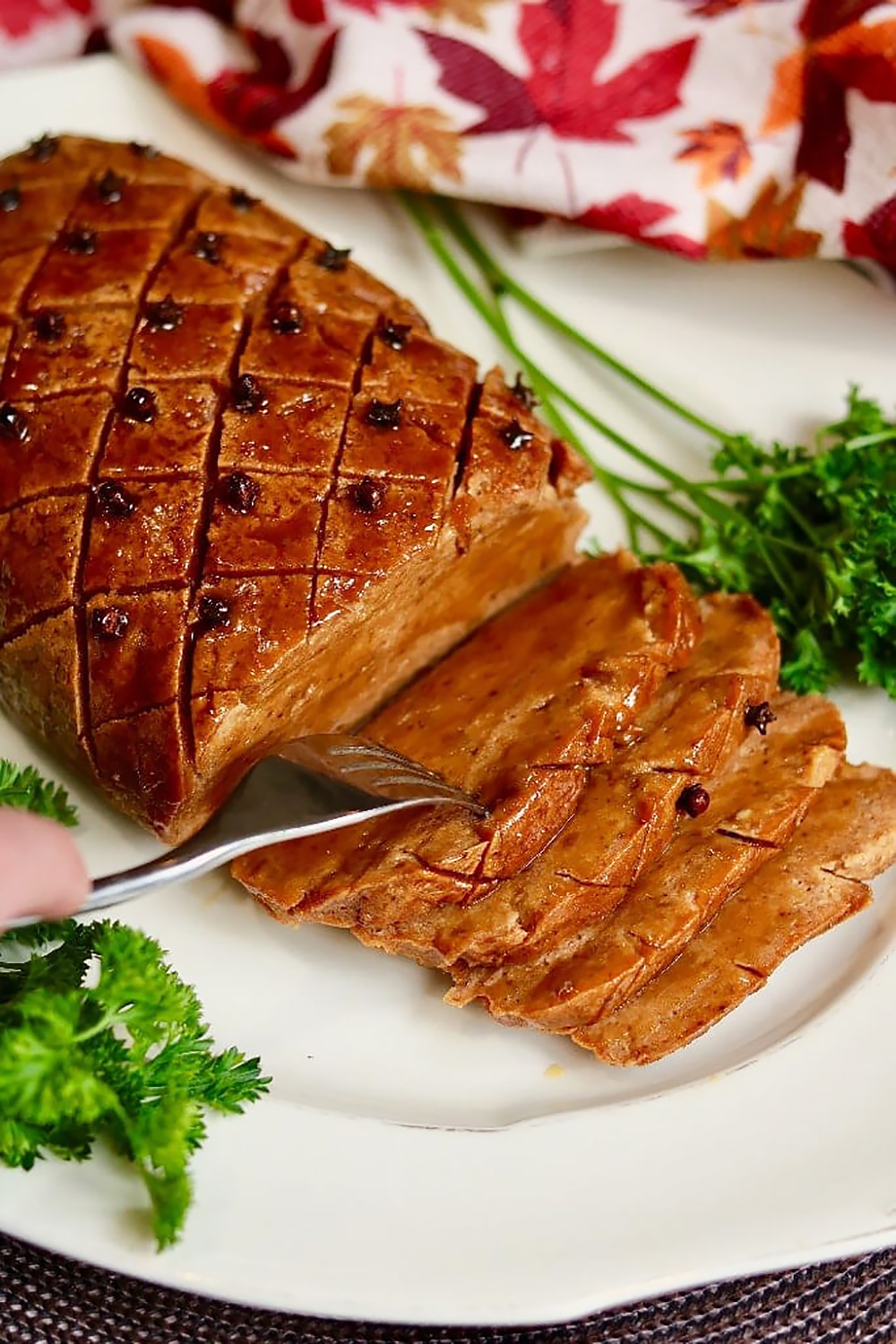 Because of its meaty texture and appearance, seitan is a common ingredient in vegan ham. This recipe combines it with tofu to get a really juicy, chewy result that even looks almost identical to the real deal. You could proudly serve this vegan ham for a holiday feast, slice it up for sandwiches, or both!
Get the recipe 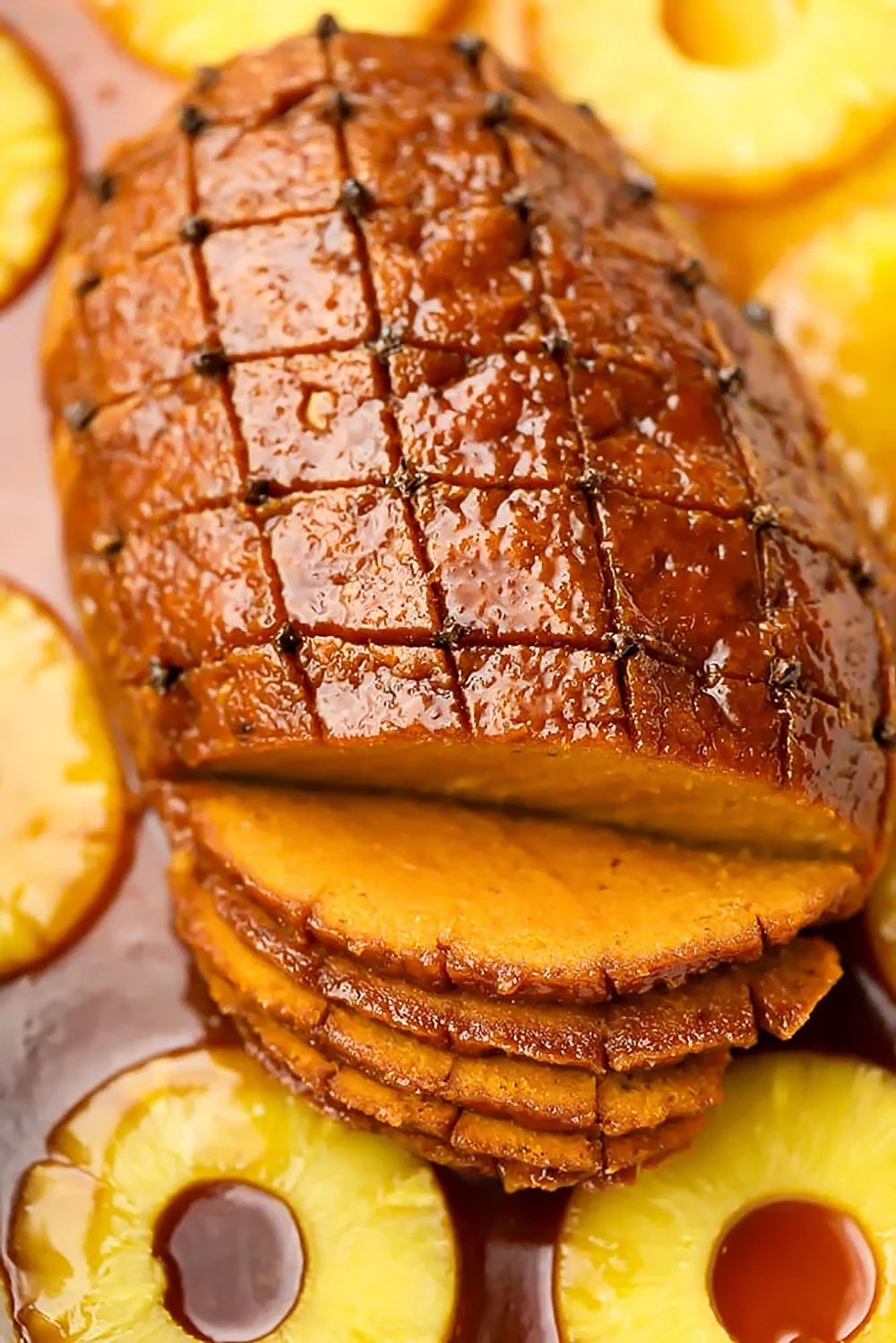 If you really want a showstopper in the middle of your holiday table this year, but you don’t fancy serving up real ham, stop right there: you’ve found the vegan recipe you’re looking for. This vegan ham roast, which mixes chickpeas and vital wheat gluten, will seriously impress your dinner guests. There’s even a maple glaze, too.
Get the recipe 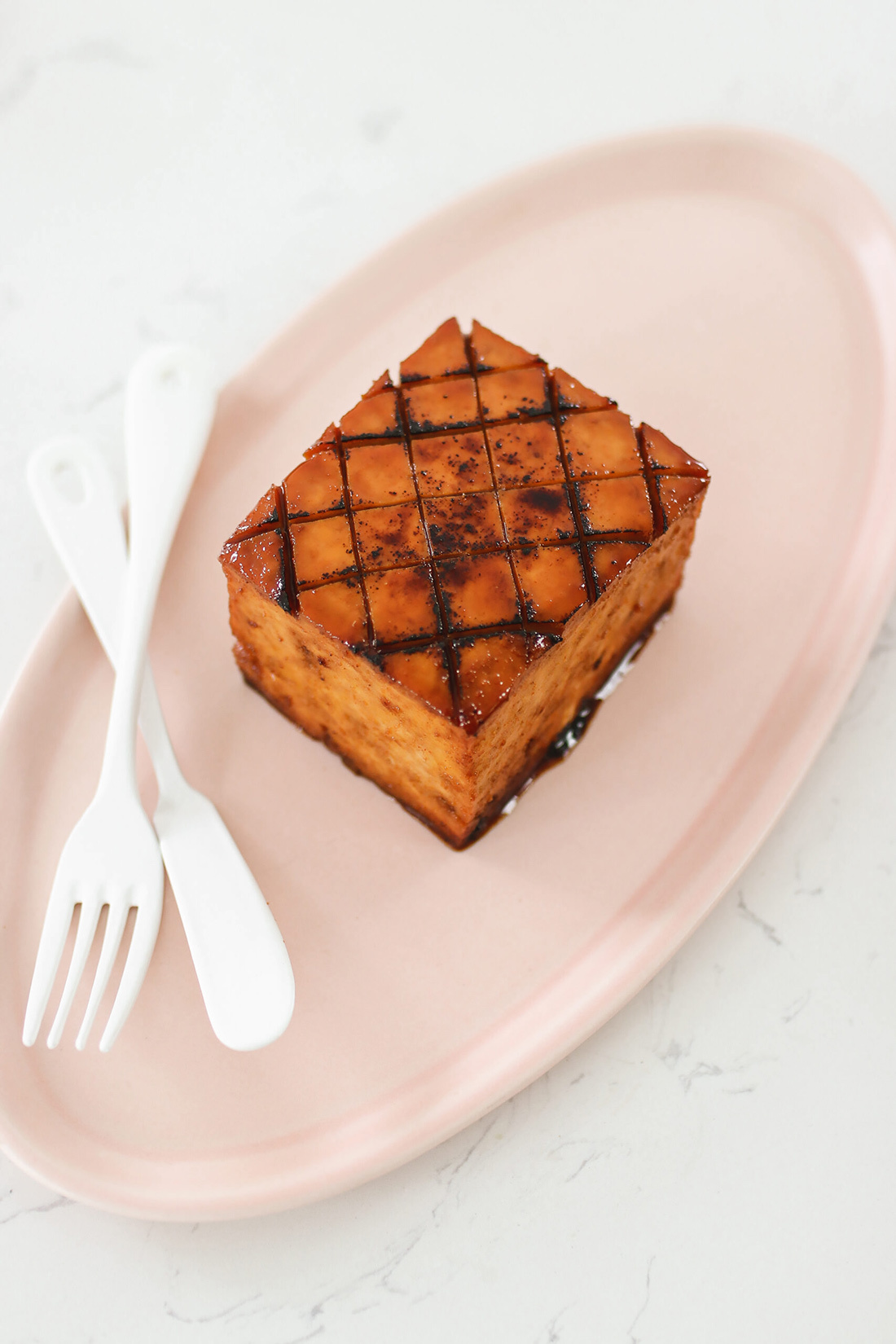 Tofu is arguably one of the most versatile vegan ingredients around. It can form the basis of so many vegan meats, and ham is no exception. The key is the marinade. Allow the tofu to soak in all the delicious flavors by marinating it for plenty of time. After that, bake and serve with tasty vegan gravy.
Get the recipe 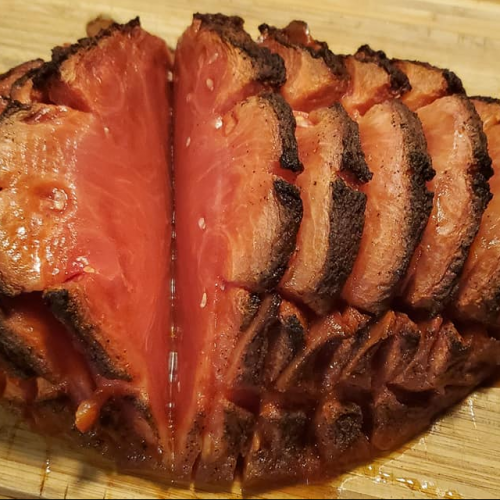 It sounds strange at first, but yes, watermelon really can work as a vegan ham alternative. Of course, it won’t have the exact same meaty texture, but with the right blend of spices and smoky flavoring, you’ll be pleasantly surprised by this recipe. It even looks the part. Watermelon ham can be made all year round, but it really shines on the grill, so perhaps one to save for the summer months.
Get the recipe 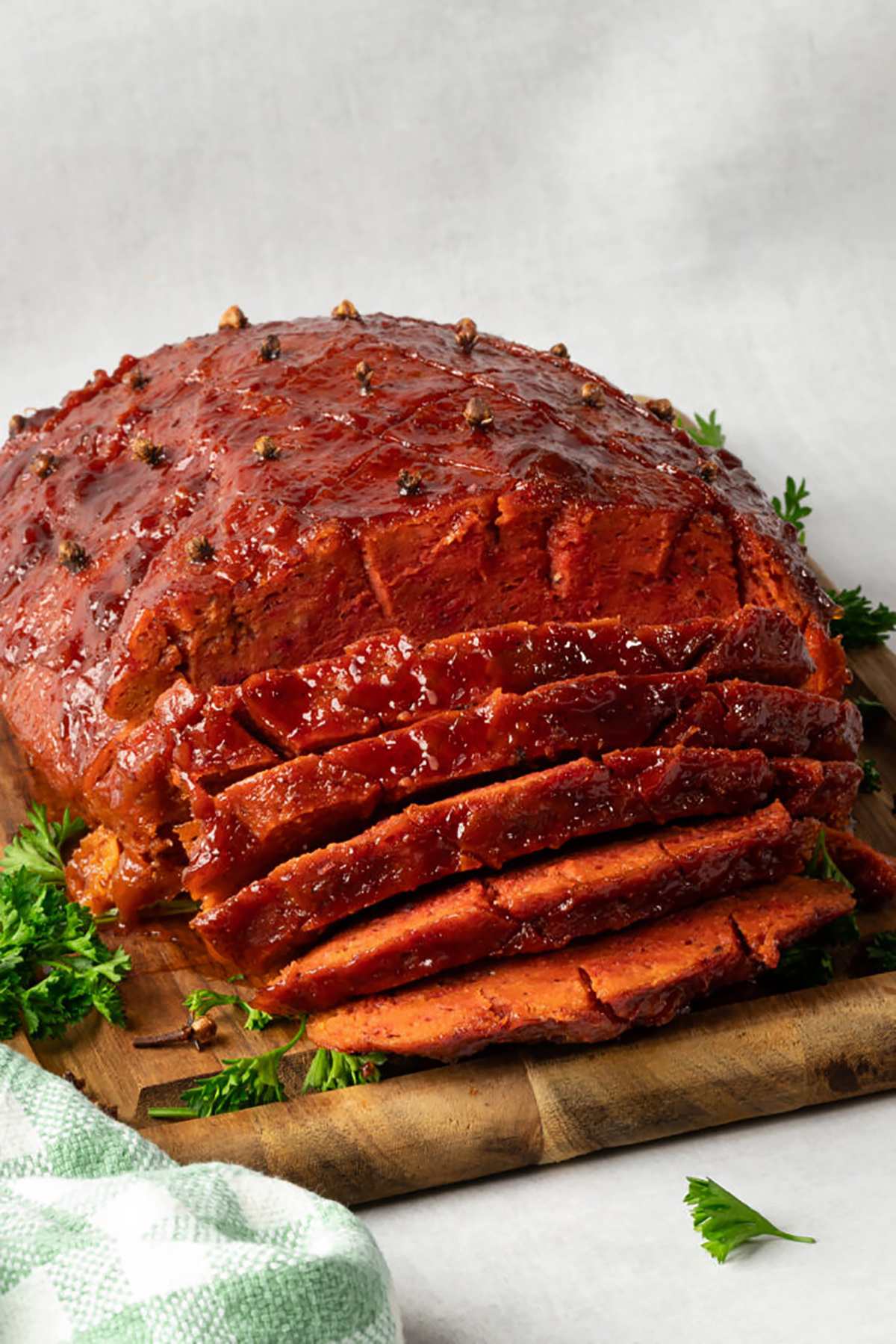 Again, thanks to seitan, you can guarantee this vegan ham recipe is going to have a satisfyingly meaty texture. Kidney beans are added for extra vitamins and minerals, but also so you can achieve that realistic ham-like pink color. Seriously, your guests are going to be beyond impressed when you wheel this one out for the holiday table.
Get the recipe

For more on vegan meat, read: