Humans have been eating shellfish for thousands of years. In fact, researchers believe that 165,000 years ago, cave-dwellers in South Africa were dining on bowls of crustaceans to survive. Just like their ancestors, in 2022, people still love seafood. But it’s not about survival anymore, it’s about indulgence. Reports suggest that, on average, Americans eat one billion pounds of shrimp every year.

But all of this excessive consumption has an impact. Unlike thousands of years ago, shellfish has turned into big business. And the shrimp industry, in particular, is associated with a number of serious issues, including environmental destruction and poor animal welfare. There are, however, alternatives available.

While it was once niche, the plant-based seafood market is growing. By 2031, reports suggest it could reach a valuation of $1.3 billion. That means more vegan fish options, but also, lots more vegan shrimp. That said, it’s not necessary to wait another nine years to get your hands on some plant-based shellfish, as there are already plenty of options on the market. If you have the time and patience, you could also make vegan shrimp at home using simple plant-based ingredients.

We’ve rounded up some of our top vegan shrimp brands and recipes, but first, let’s take a closer look at the problems with the conventional shrimp industry.

It’s not just the US that loves to eat shrimp. Shellfish is also loved in the UK (where it’s more likely to be referred to as a prawn, despite the fact it is technically a different species), and across Europe, particularly in the south. Japan and China (the world’s largest seafood consumers) are also two massive markets for shrimp.

But, alongside China, three of the biggest producers of shrimp are Thailand, Indonesia, and Vietnam. The latter’s production is expected to exceed 980,000 tons this year, and the US is its biggest customer. But all of this comes at a significant environmental cost.

Over the last 30 years or so, shrimp farming in Vietnam has driven the loss of most of its mangrove forests. In Thailand, research suggests that from 1975 to 2004, around 50 to 65 percent of mangroves were lost to shrimp farming.

This is a major problem, because, as highly efficient carbon sinks, mangroves (semi-aquatic trees that grow in coastal water) are essential in the fight against the climate crisis. In fact, some research suggests they are better at sequestering carbon than rainforests, as they can store carbon in their roots for potentially thousands of years. But, due to shrimp farming, other forms of agriculture, and the timber industry, the world has already lost 35 percent of them.

The process of clearing mangroves also emits significant amounts of carbon dioxide—more than that of the entire of Myanmar, according to one study. Plus, further research suggests that because of this impact, eating one kilogram of shrimp could result in four times the greenhouse gas emissions of the same amount of beef.

Most of the shrimp on the market (around 90 percent in the US) come from farms in Asia or Central America, but, while it is in decline, wild shrimp fishing remains a substantial industry. In 2019, for example, Georgia fishers caught more than 2.6 million pounds of shrimp. But this kind of shrimping also comes with its own set of environmental problems. 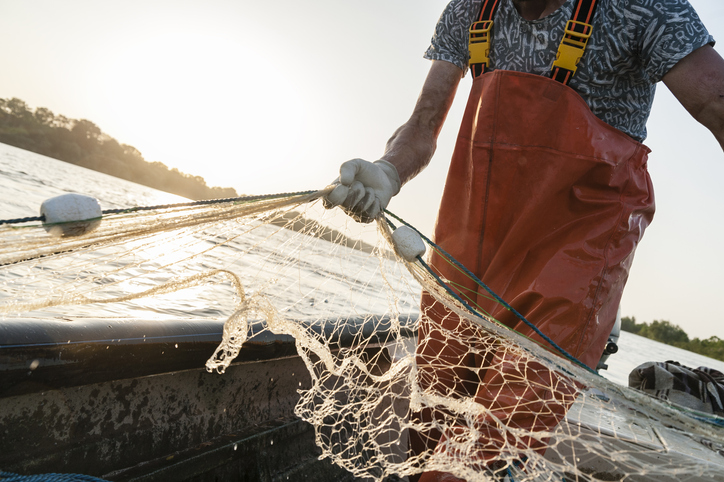 To catch wild shrimp, trawlers drag nets across the bottom of the ocean. But, as they are unable to distinguish between a shrimp and another marine species, this results in a lot of bycatch. According to the Turtle Island Restoration Network, shrimp nets are the number one killer of sea turtles.

All environmental problems aside, there is another big problem with the shrimp industry: animal sentience.

Like other crustaceans and fish, research confirms that shrimp feel pain. But on farms, they are often subjected to brutal mutilations, like eyestalk ablation. This is when the eyestalks of a breeding shrimp or prawn (which regulate the animals’ ovaries) are removed to improve egg production.

Crustacean Compassion, a non-profit organization dedicated to the welfare of animals like crabs, lobsters, and shrimp, states that “the practice is a violent solution to the fertility problems caused by captive conditions.” It notes that the procedure is not only painful but also impacts shrimp’s sensory perception and immune systems.

What is vegan shrimp?

Enjoying the taste and texture of shrimp doesn’t have to come with a host of environmental and ethical problems, because vegan shrimp exists.

The shellfish-free alternative can be made with a variety of ingredients, but konjac, an Asian root vegetable, is perhaps one of the most common. That’s because the scent is slightly fish-like, and the mouthfeel is very similar to shrimp meat.

Other ingredients brands often use to make vegan shrimp include soy or pea protein, which is often flavored with seaweed. At home, DIY vegan shrimp recipes often call for ingredients like hearts of palm, tofu, or oyster mushrooms.

If you’ve got a taste for shrimp, but don’t fancy the cruelty or environmental damage that comes on the side, these vegan brands offer more ethical, more sustainable alternatives. 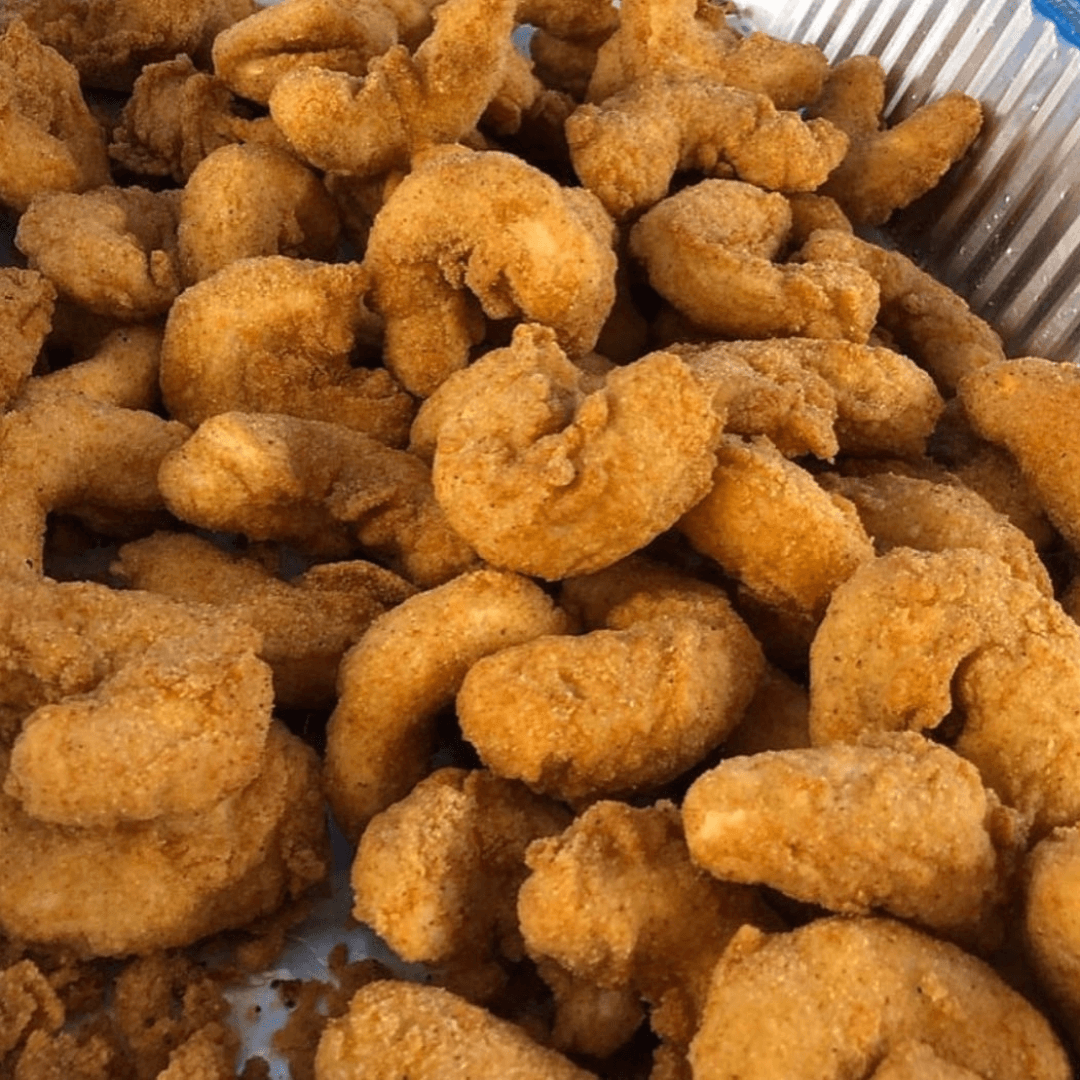 Good2Go Veggie’s vegan shrimp has an unlikely origin story—one of its creators, Dwight Culbreath, also owns a seafood restaurant. He decided to get involved with the brand because his wife urged him to consider adding more plant-based options to the menu, and so, Shock’N Shrimp was born. Made with konjac powder, nori, and more plant-based ingredients, you can be satisfied that this vegan shrimp will taste like the real thing. Not least because it carries a real seafood connoisseur’s stamp of approval.
Find out more 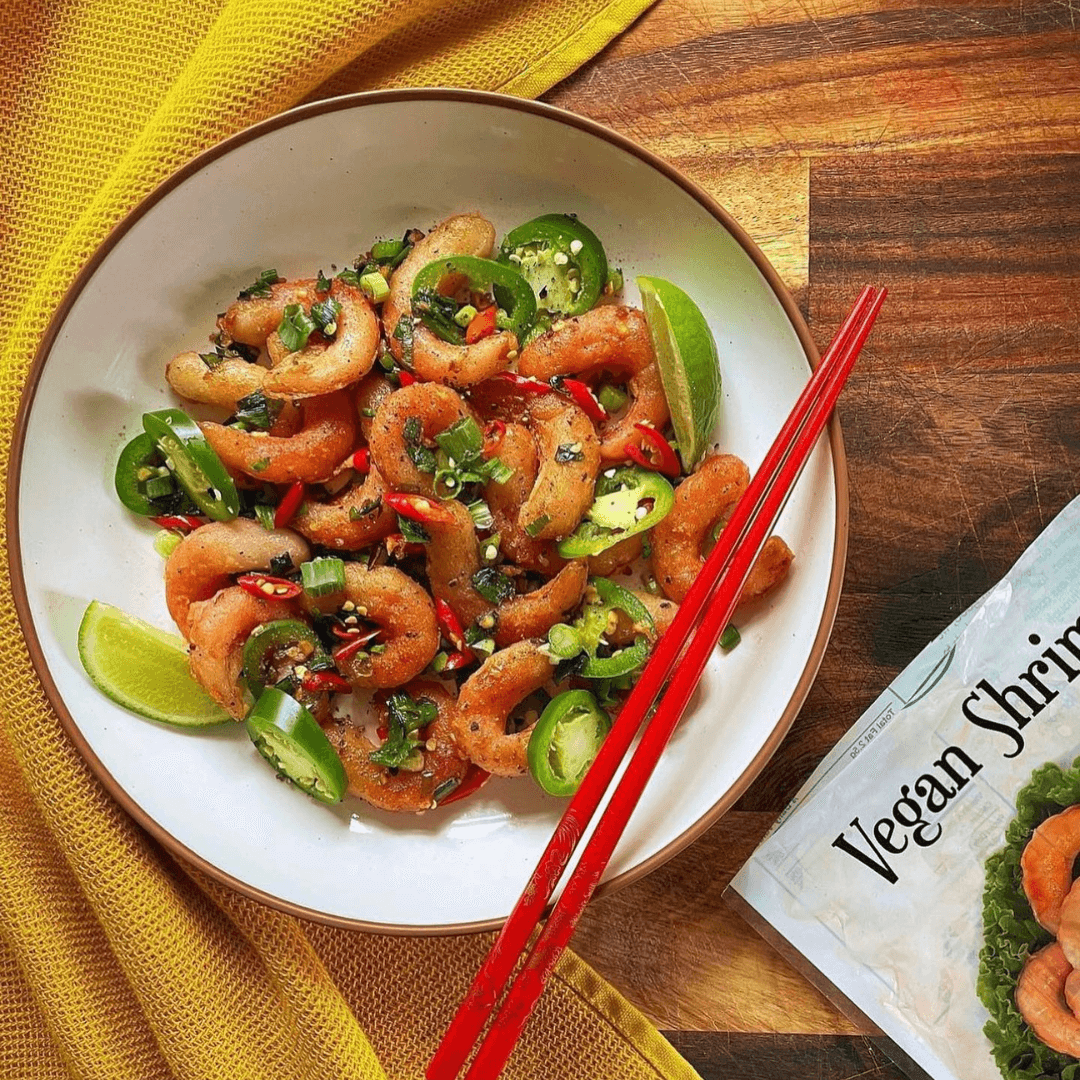 Founded back in 1993, All Vegetarian Inc. is a family business focused on creating the most realistic-tasting, delicious vegan meat and fish alternatives. Based in Northern California, its target market is Americans, but all of its products are manufactured in Taiwan, where mock meat was popular long before its surge in the West. Made with pea and seaweed extract, the brand’s vegan shrimp is one of its best-selling products. The brand also makes vegan drumsticks, bacon, chicken breast, tuna, egg, and more.
Find out more 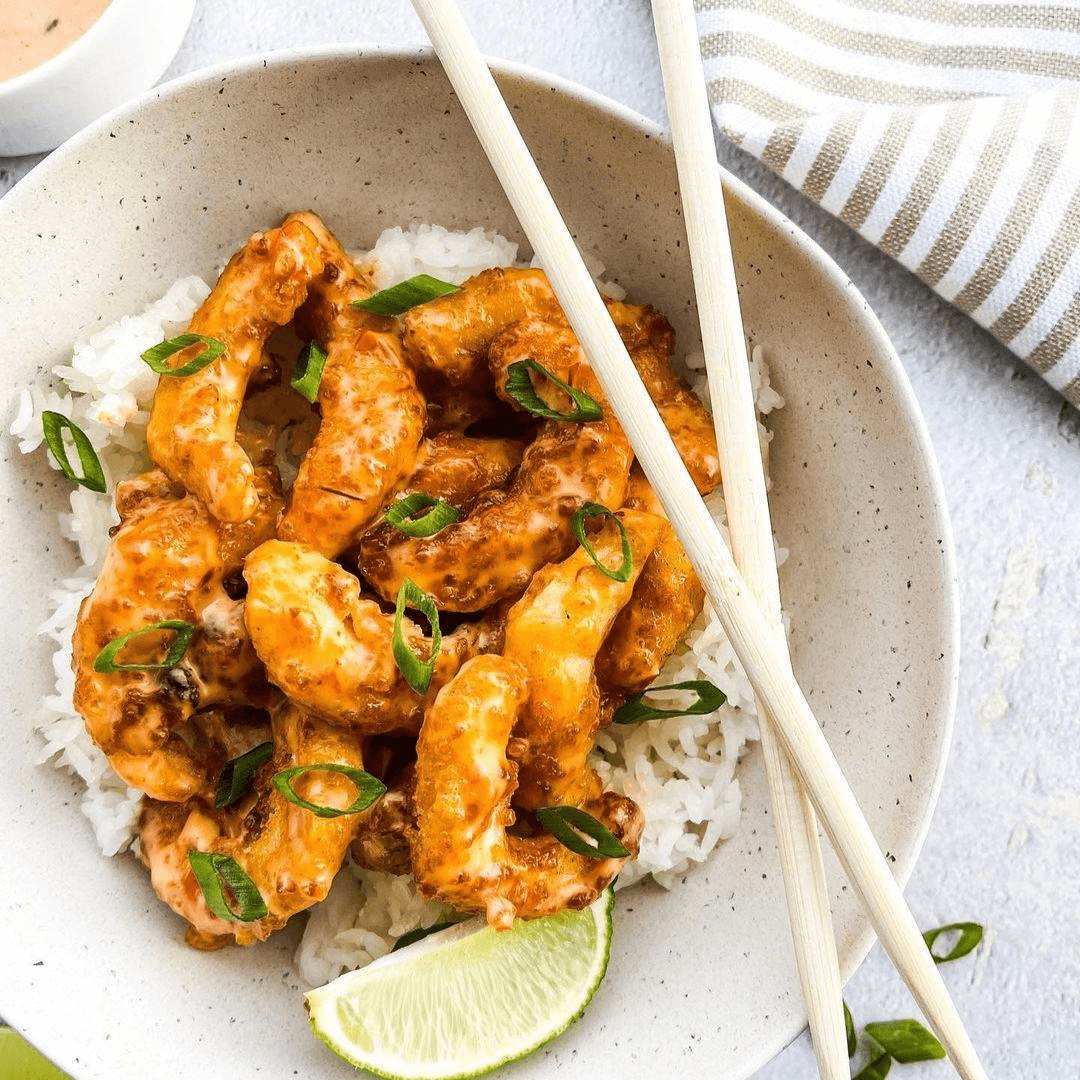 Sophie’s Kitchen strives to create vegan seafood products that offer the same taste and texture as their conventional counterparts, only without the environmental impact. Its crispy Plant-Based Breaded Shrimp is ideal for snacking on by itself, with a hefty portion of fries, or in a taco with avocado, lime, and a touch of cajun spice.
Find out more 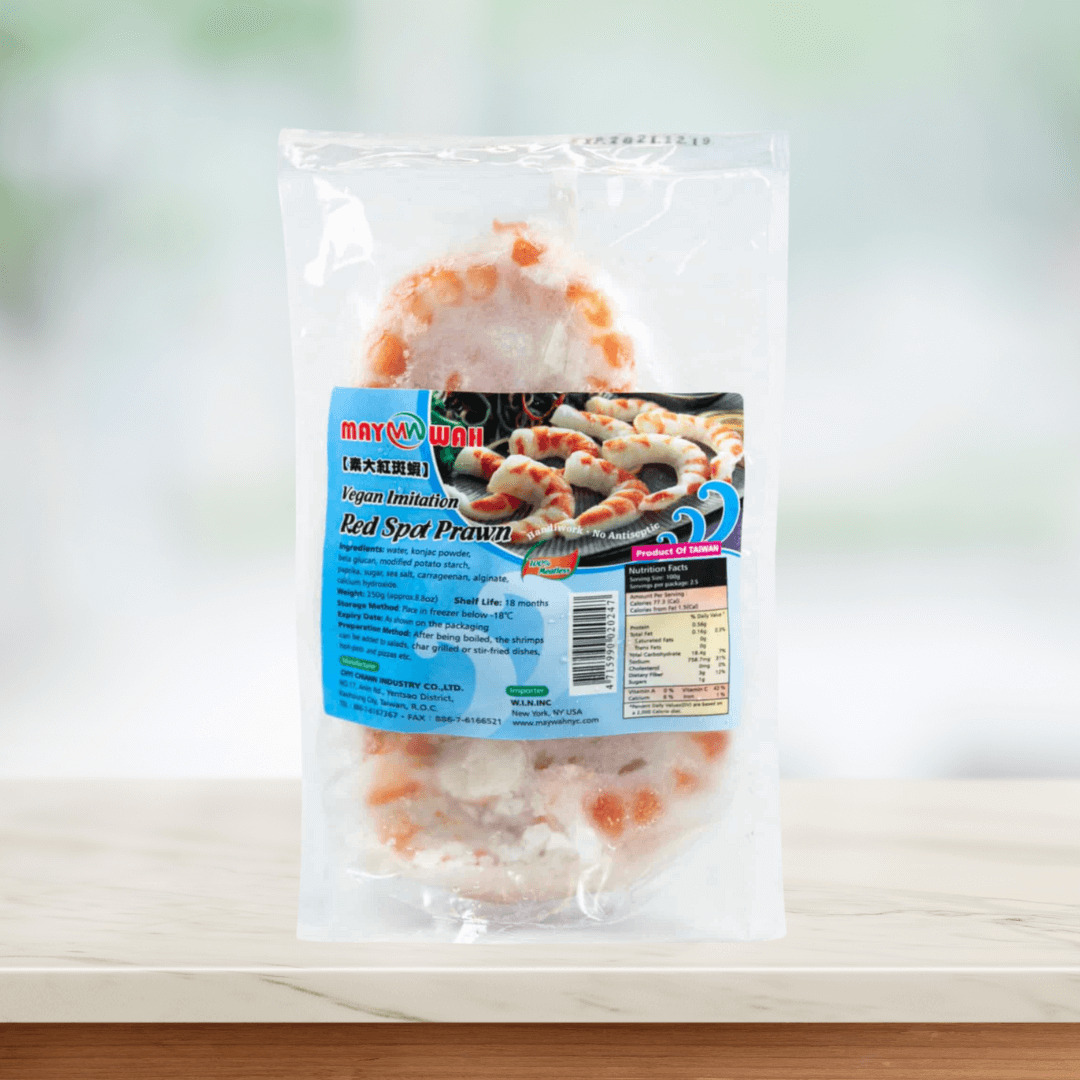 Lily’s Vegan Pantry, which used to be called May Wah Vegetarian Market, offers expertly-crafted, realistic vegan meat. And that’s because the store—originally just a small local business in Chinatown, New York—has been around for more than 25 years. It was created by Lee Mee Hg, who started her own line of vegan products after she moved to the US from Taiwan, and began to miss the wide range of mock meats on offer back home. The brand offers its konjac-based vegan shrimp in several different formats, including Red Spot Shrimps, Vegan Shrimp Balls, and Vegan Shrimp Rolls.
Find out more 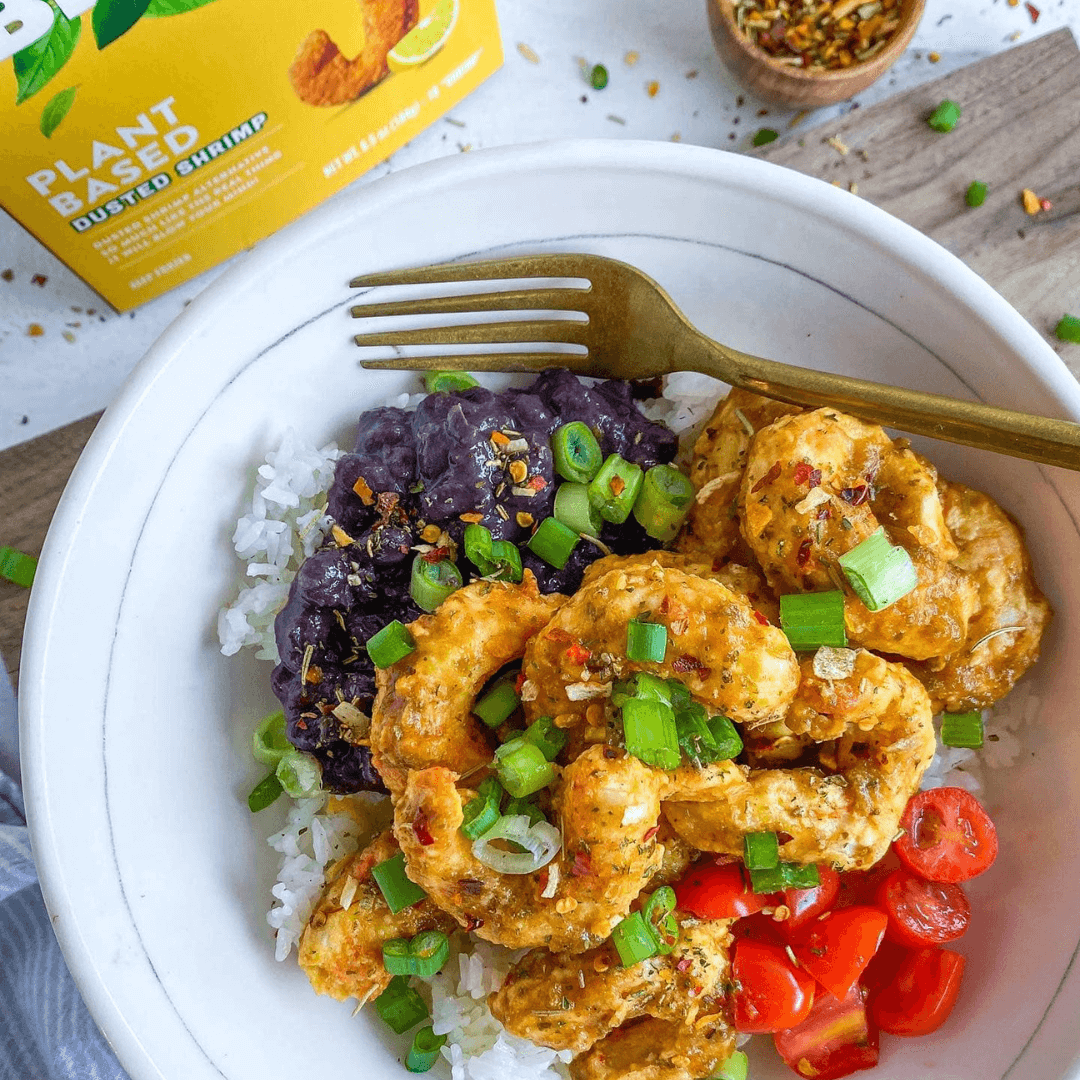 5 The Plant Based Seafood Co.

Like Good2Go Veggie, The Plant Based Seafood Co. was created by seafood industry professionals. After witnessing “unacceptable” practices, mother-and-daughter duo Shelly Van Cleave and Monica Talbert decided to move into vegan seafood, and they haven’t looked back. The brand’s hand-battered Mind Blown Coconut Shrimp, which is also gluten-free, is the perfect taco ingredient. Alternatively, you could enjoy it in a salad, with a sweet chili dip, or with a little bit of Dijon mustard.
Find out more

If you love to take on new challenges in the kitchen, you could skip the branded options and instead make vegan shrimp from home. Whether you’re a tofu-lover, a fan of mushrooms, or enjoy experimenting with different meat substitutes, there are multiple ways to put your own stamp on this shellfish-free treat. 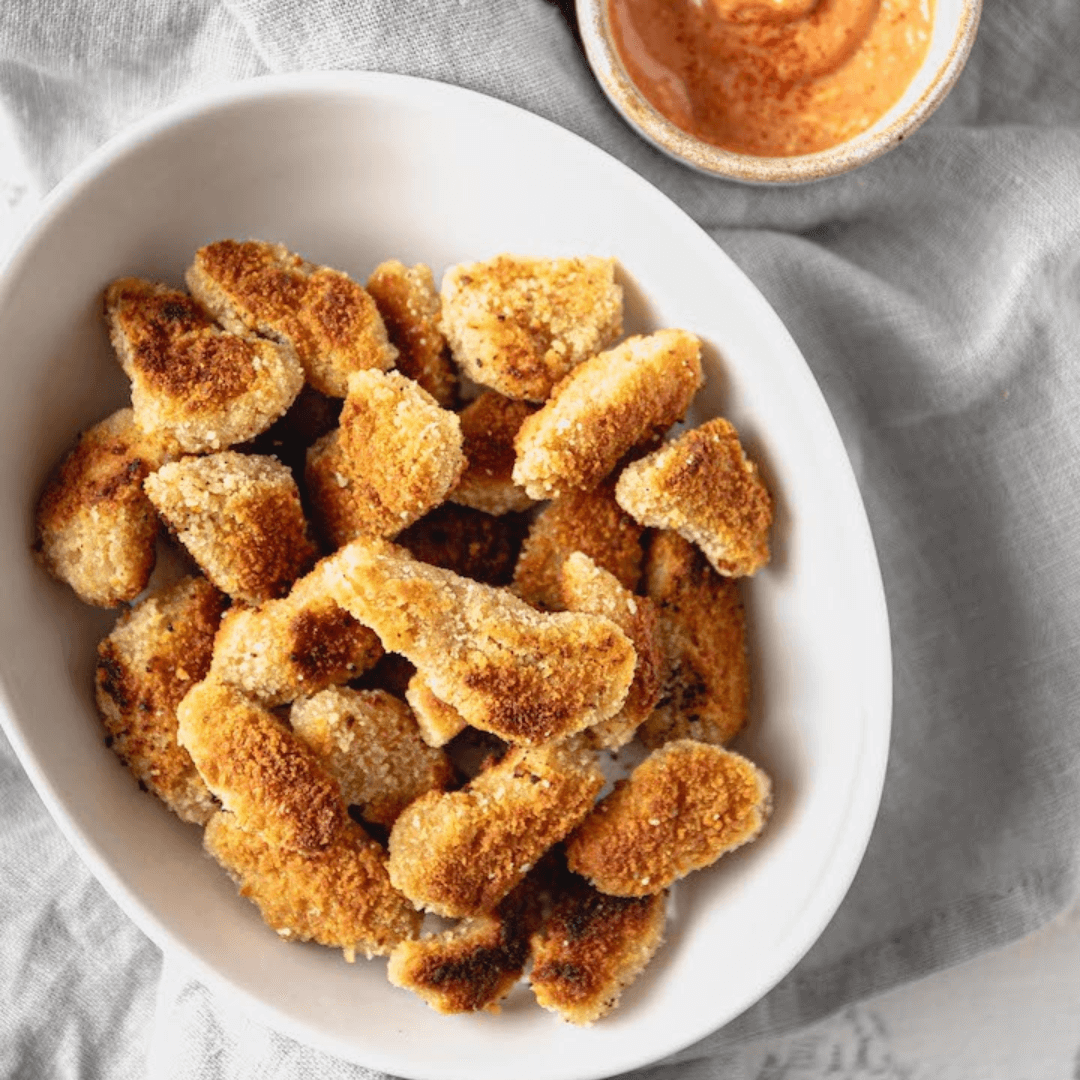 Soy curls (essentially just dehydrated strips of soy protein) are cheap, versatile, and easy to cook with. While they are initially quite bland taste-wise, they are great at soaking up flavors when you marinade them, making them the ideal blank canvas for vegan shrimp. This shrimp recipe advises that you marinade the soy curls in vegetable broth, paprika, garlic powder, and salt, before breading, frying, and serving with vegan cocktail sauce.
Get the recipe 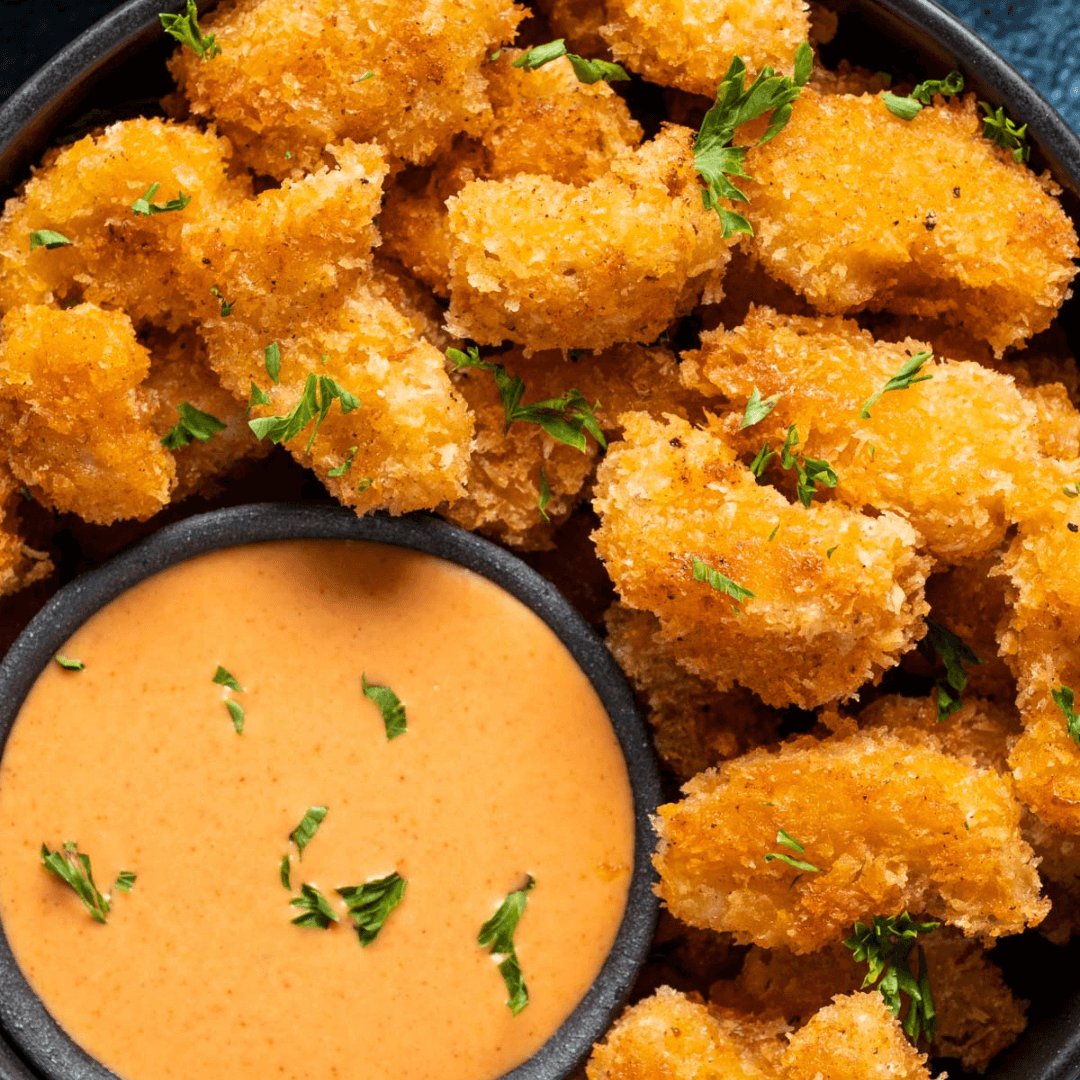 Mushrooms, in general, are a great meat alternative. But king oyster mushrooms in particular are known for their meaty texture and savory flavor, making them the ideal basis for this vegan popcorn shrimp recipe. With just a few simple steps, this is a great recipe to bring out when you’re hosting friends or family, or when you’re just craving something crispy and fried.
Get the recipe 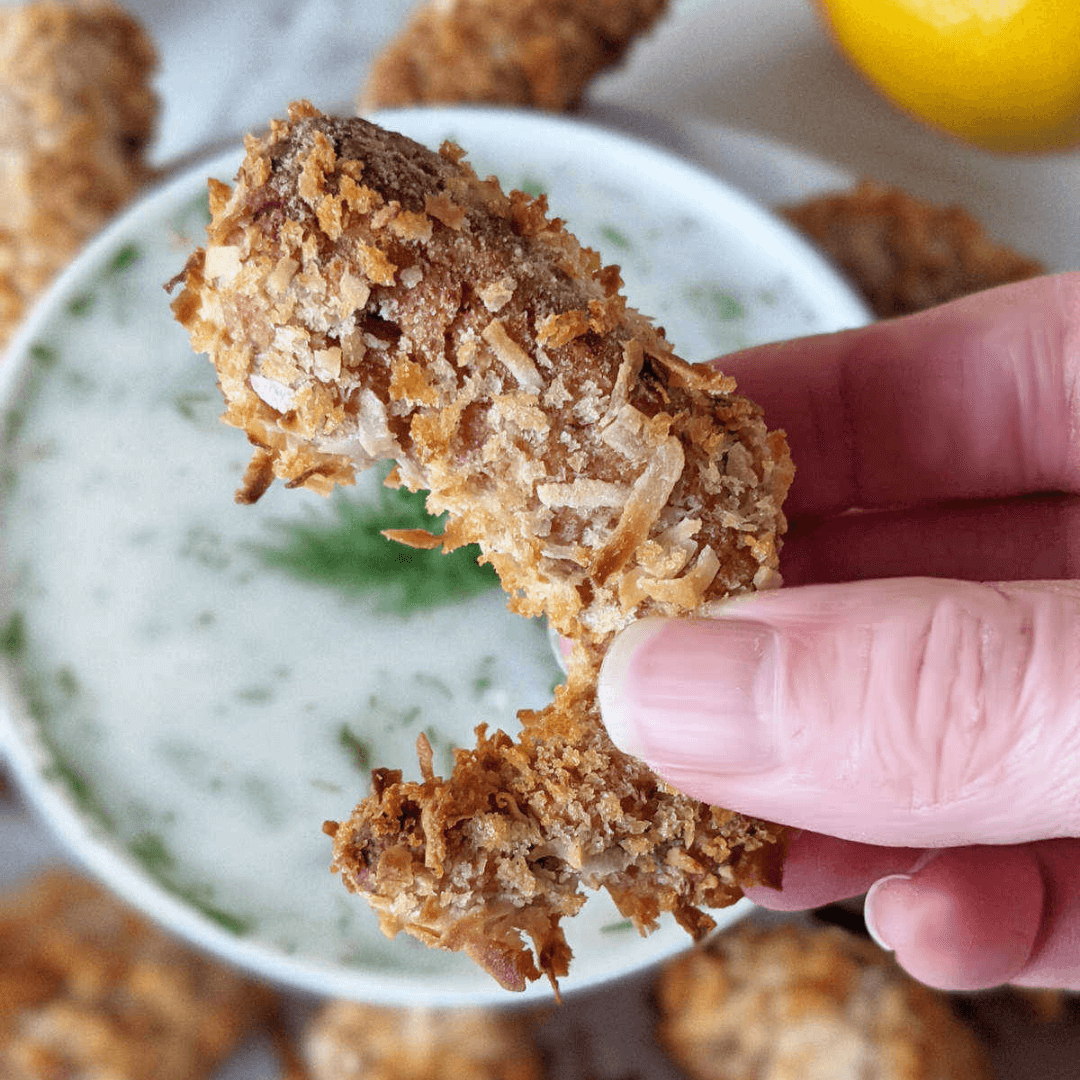 Packed with protein, vital wheat gluten (the basis of seitan) offers a meaty texture to this shrimp recipe. Old Bay seasoning is added for a hint of seafood flavor, but kelp, a form of seaweed, is what really gives this vegan shrimp its fishy taste. This is a great recipe for those who prefer to use the air fryer over conventional methods.
Get the recipe 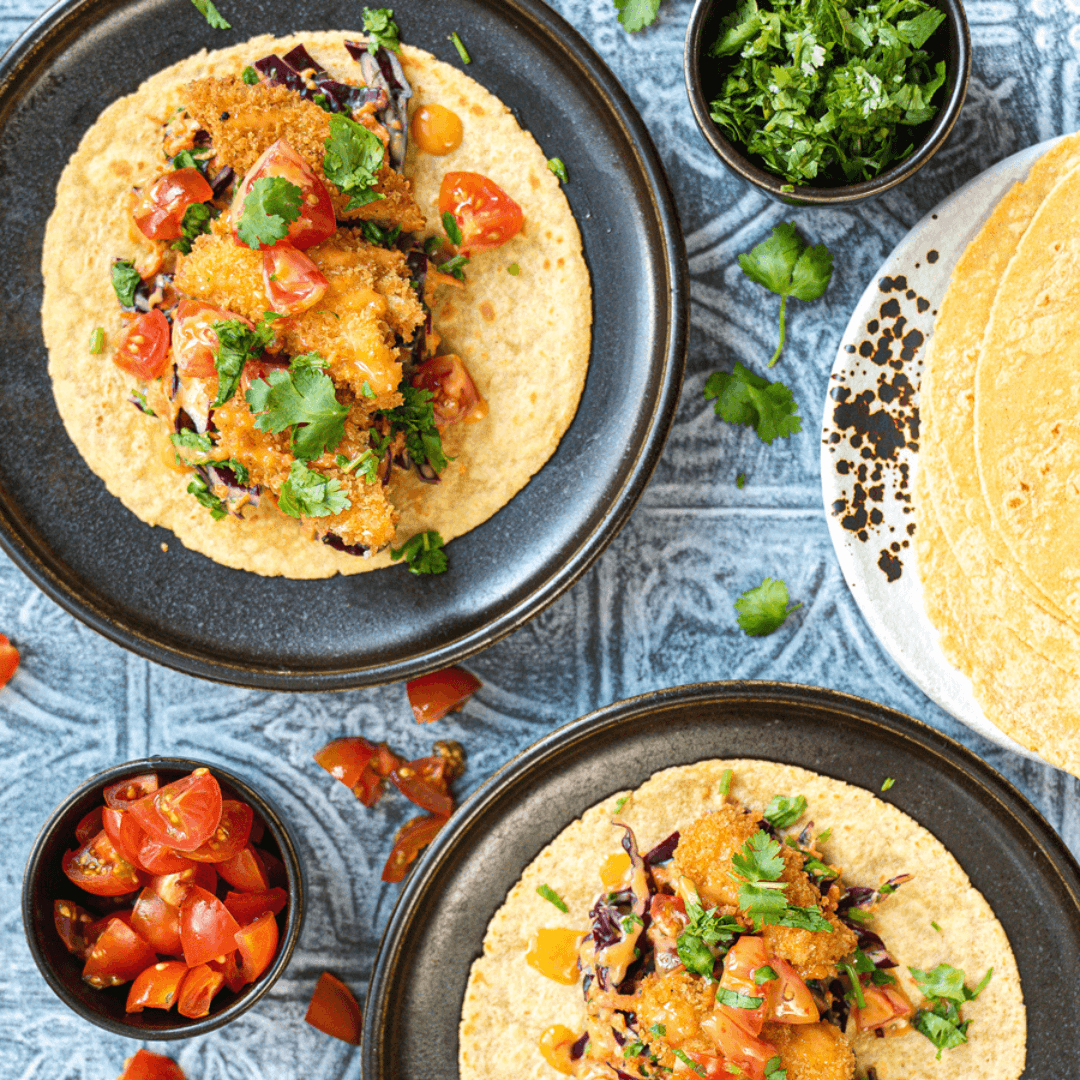 4 Vegan Shrimp with Hearts of Palm

Hearts of palm (a crunchy vegetable taken from cabbage palm trees) may have a hard exterior, but the inside is meaty and fleshy, which makes it the ideal shellfish replacement. This vegan shrimp taco recipe recommends that you cover the plant-based ingredient with panko breadcrumbs, paprika, flour, garlic, and egg replacer, before air frying and serving with bang bang sauce and slaw.
Get the recipe 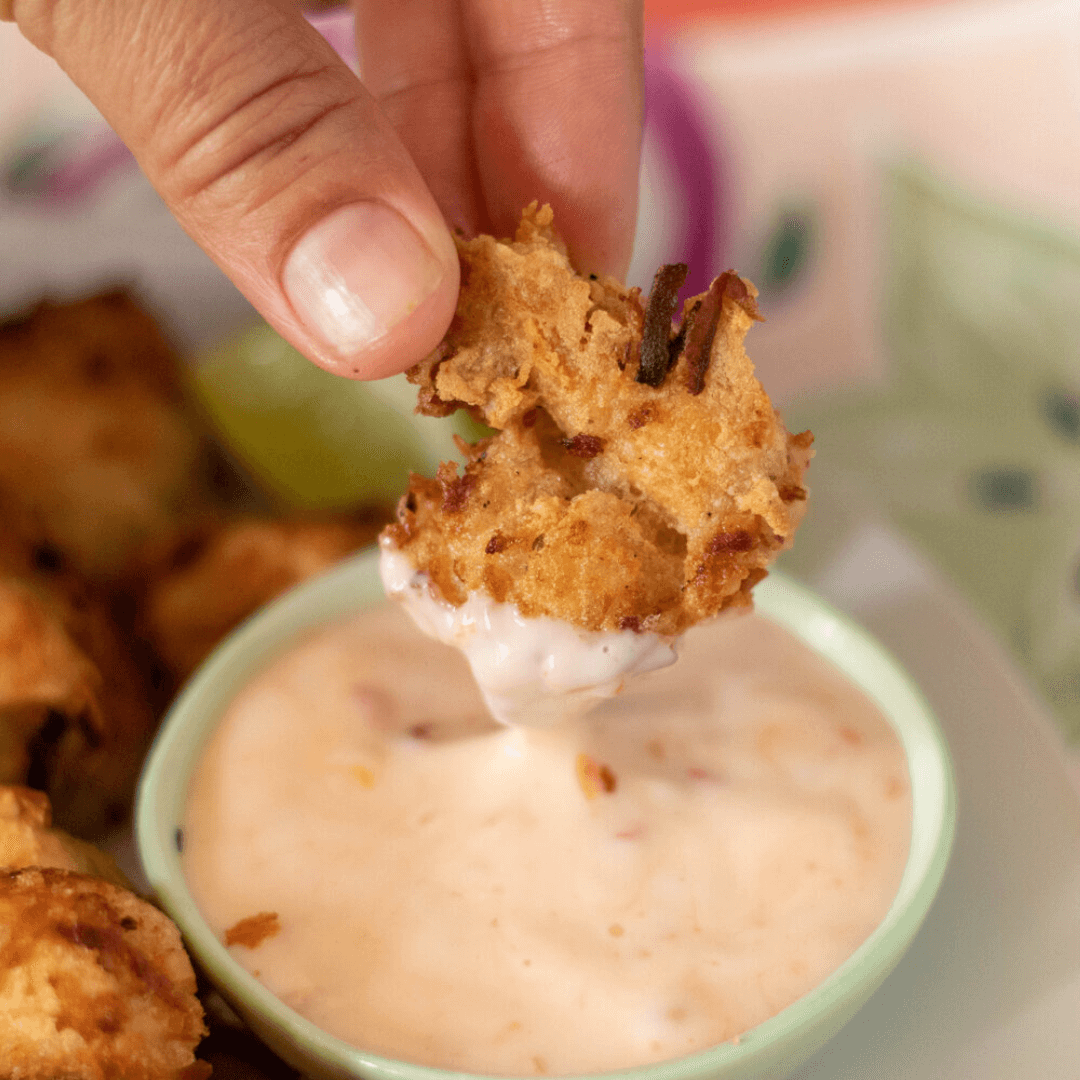 Finally, this vegan shrimp recipe features the classic, tried, and tested vegan ingredient: tofu. The tofu itself has a soft, meaty feel, similar to shellfish, while the crunchy, crispy texture associated with popcorn shrimp comes from panko breadcrumbs and shredded coconut, plus a batter made with vegan yogurt and milk. For a tasty dip on the side, serve with vegan chili lime sauce.
Get the recipe

For more on vegan seafood, read:

What Are Vegan Nuggets? Plus: the Best Brands and Recipes