The ongoing COVID-19 pandemic has completely changed our world. And while we work to adjust, recover, and protect ourselves, two devastating side effects have emerged: the massive impact on the restaurant industry, and the increased occurrence of discrimination and violence against those of Asian descent.

In the early days of the outbreak, Chinatown enterprises in cities across the country were among the first to suffer from huge losses in business—some up to 50 percent before mandatory quarantines began, with others shuttering for good. A spike in violent attacks against Asian Americans has put millions on edge, and in New York alone, unemployment among the demographic skyrocketed by 10,210 percent (compared to 1,927; 2,904; and 3,222 percent for Black, white, and Latinx populations, respectively).

Thankfully, the results of a positive shift can be seen: businesses have adopted delivery, takeout, and pickup models to stay afloat, and interest in Chinese food not only rebounded but spiked as Americans turned to delivery for dinner.

But we’re far from out of the woods. Asians across the diaspora continue to face unfair discrimination and hardships, and for those that are entrepreneurs, hard-won businesses still hang in the balance. So now is the time to stand up against racism and to be an ally to the Chinese and Asian American community—the fact that you can do just that by following, sharing, and enjoying the food of vegan restaurants makes it all that much easier. Here are a few places to start. 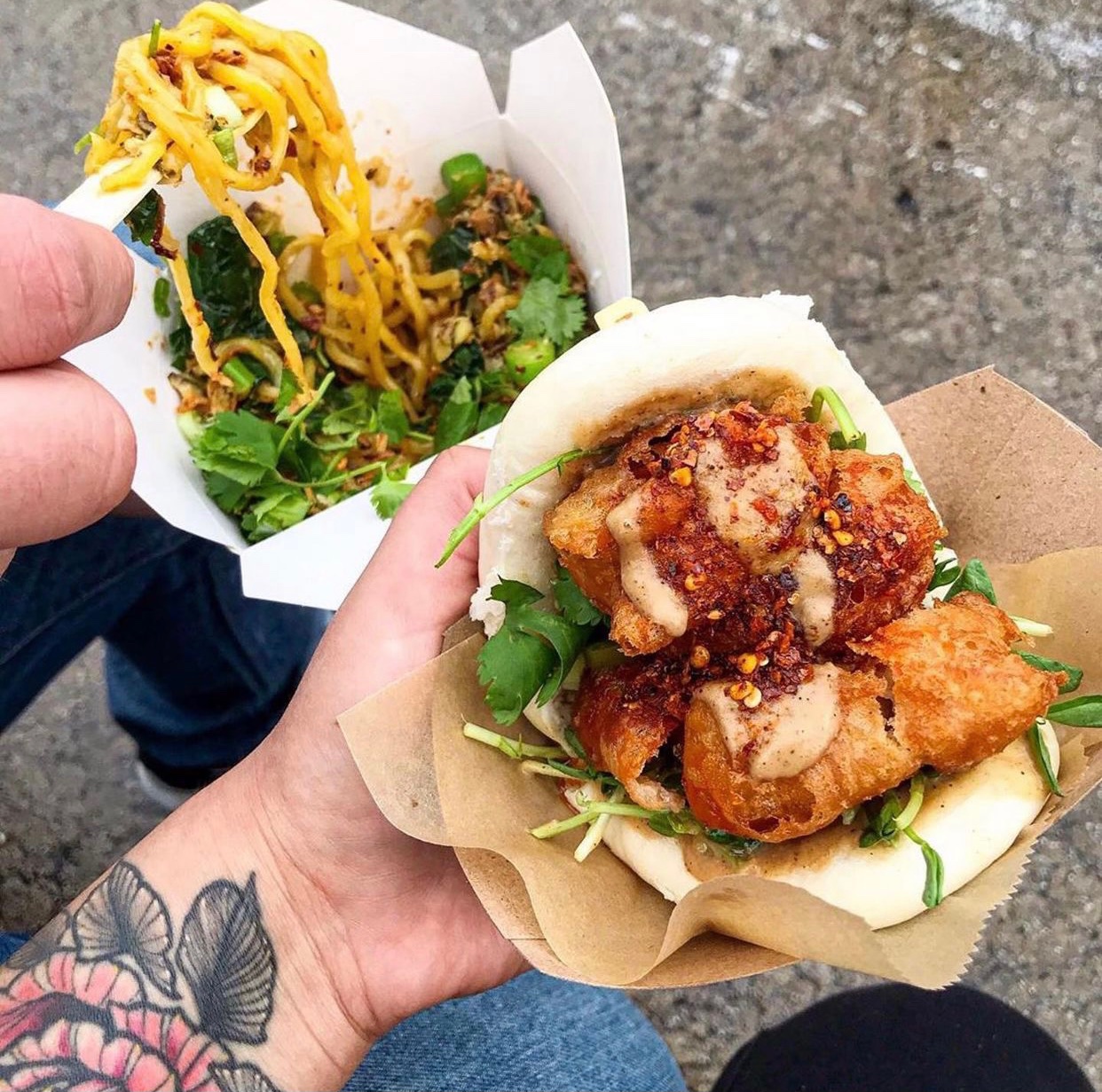 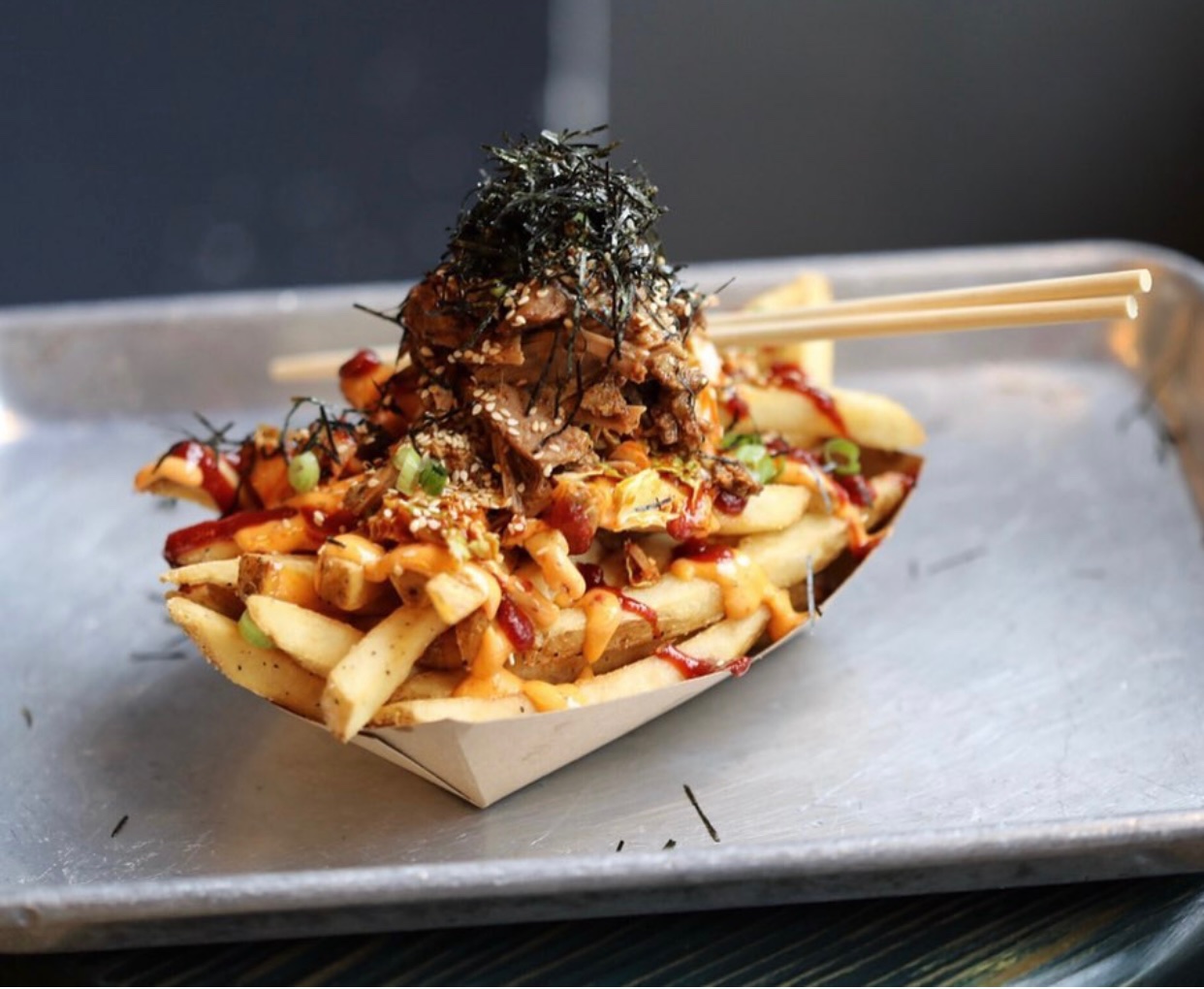 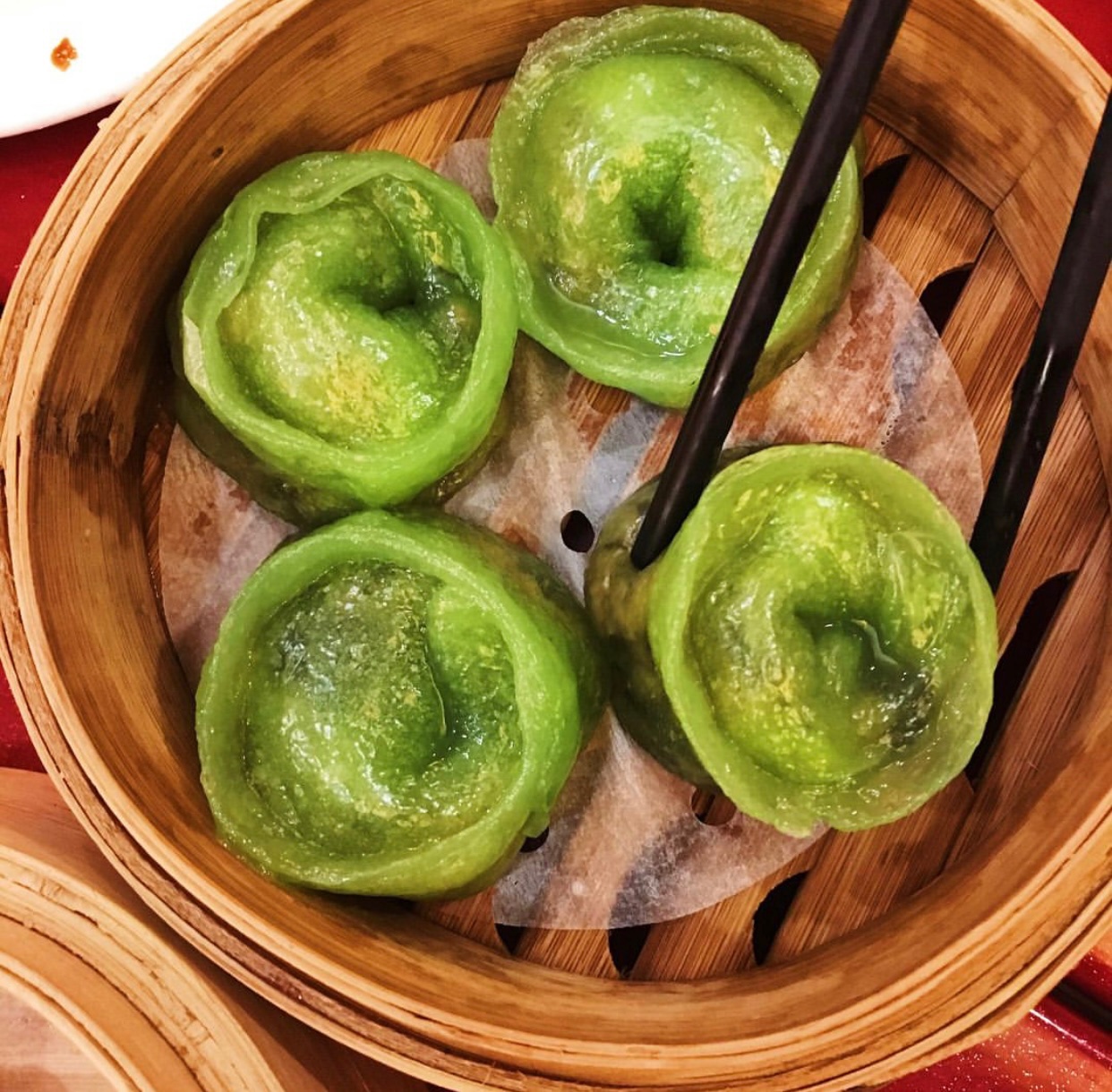 One of the most beloved spots in New York, Bodhi Kosher Vegetarian Restaurant’s entirely vegan take on traditional dim sum attracts diners from all around the country. Expect authentic plant-based bites like soup dumplings, fried shrimp dumplings, and even vegan shark fin soup—an animal-free version of the infamously popular Chinese dish that owner Kent Zhang makes to illustrate how traditional meals can be enjoyed without animals or destruction of the environment. 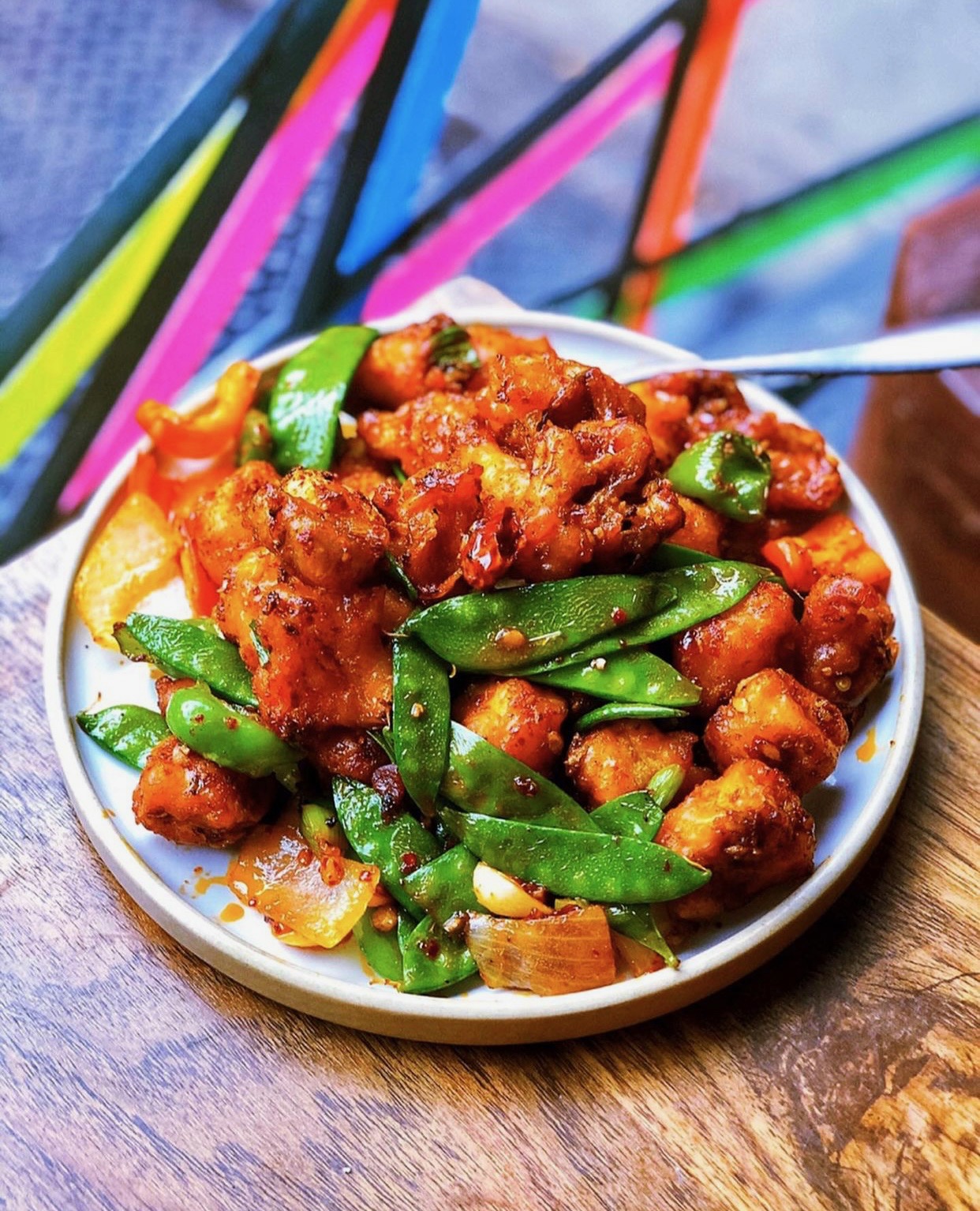 A decade after launching the Filipinx-Mexican fusion food truck that revolutionized San Francisco’s street food scene, founders Evan Kidera and Gil Payumo introduced Señor Sisig Vegano, a new concept offering an all-vegan take on their menu. And while Señor Sisig has always been vegan friendly—giving veg-heads the option to stuff and top their burritos, nachos, and tacos with tofu—Señor Sisig Vegano is making headlines for slinging vegan pork and chicken sisig, tocino, and longanisa chorizo. 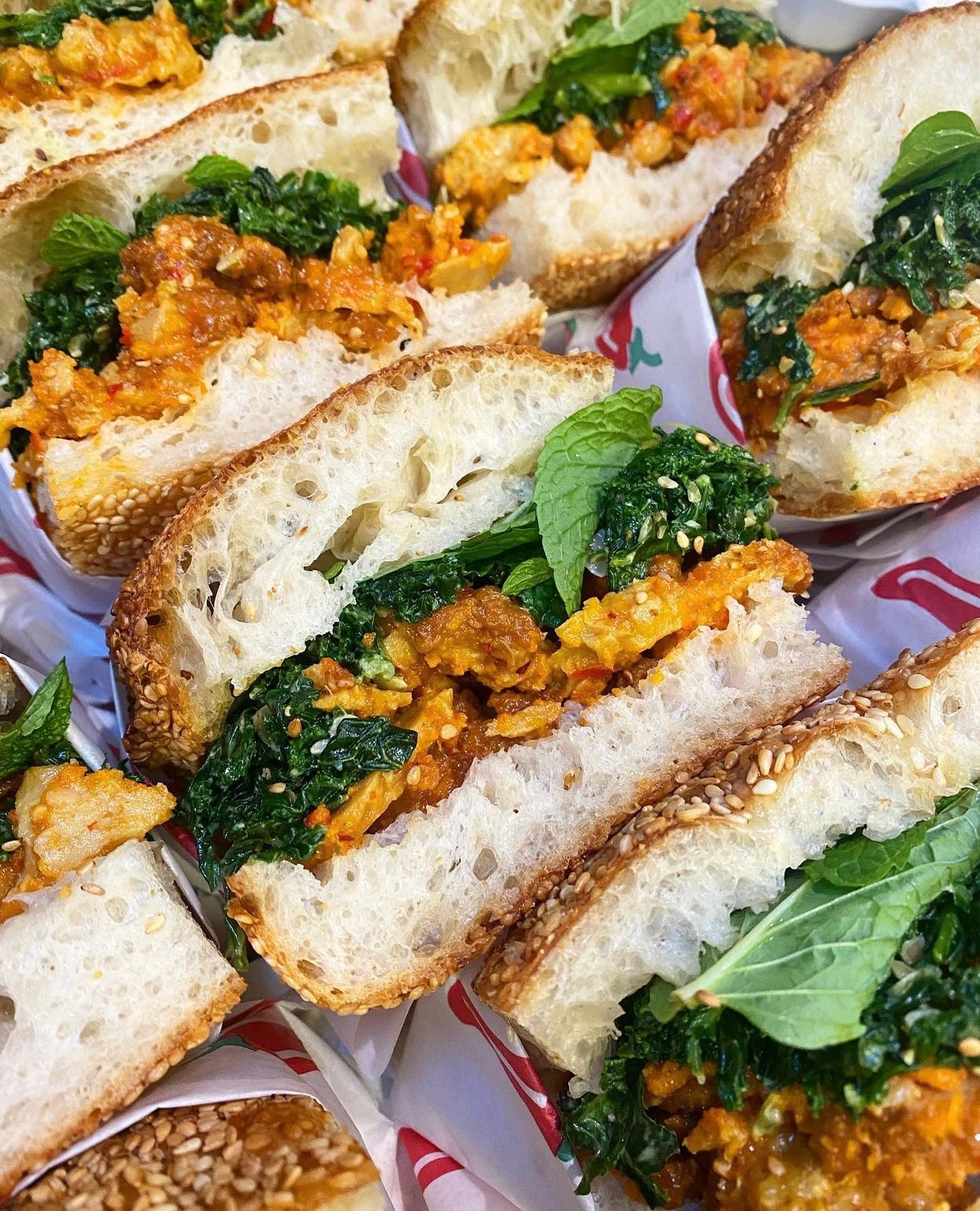 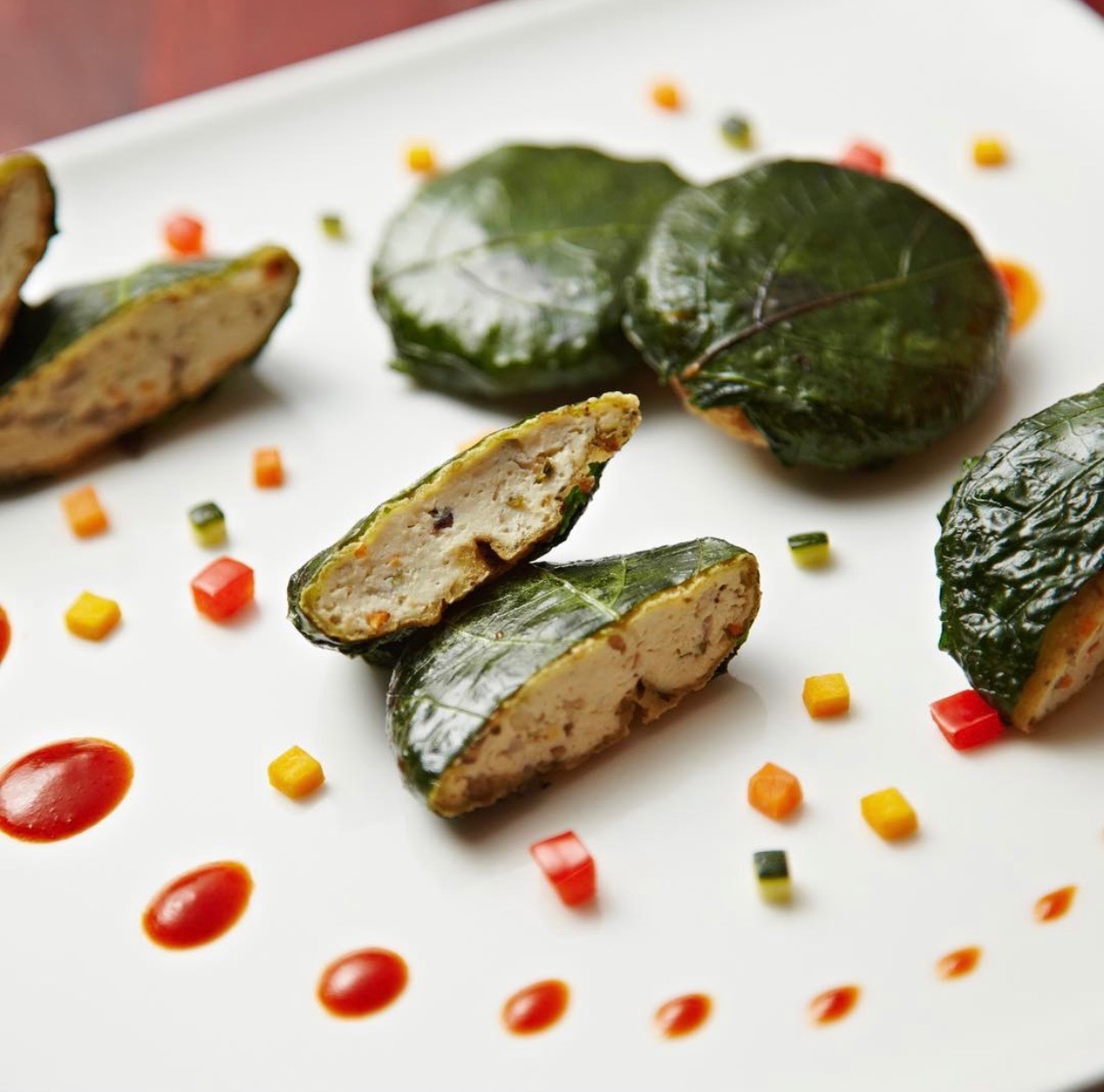 This NYC institution owned by Seoul native Terri Choi aims to share with the western world the innate beauty and vibrance of Korean cuisine, artfully veganized with the help of ancient mountain greens and roots, sea vegetables, and wild mushrooms. Choi and her team approach food adhering to the tenet of um and yang (Korean for yin and yang), or balance. Find that inner balance for yourself with not one, but two spicy kimchi stone bowls. 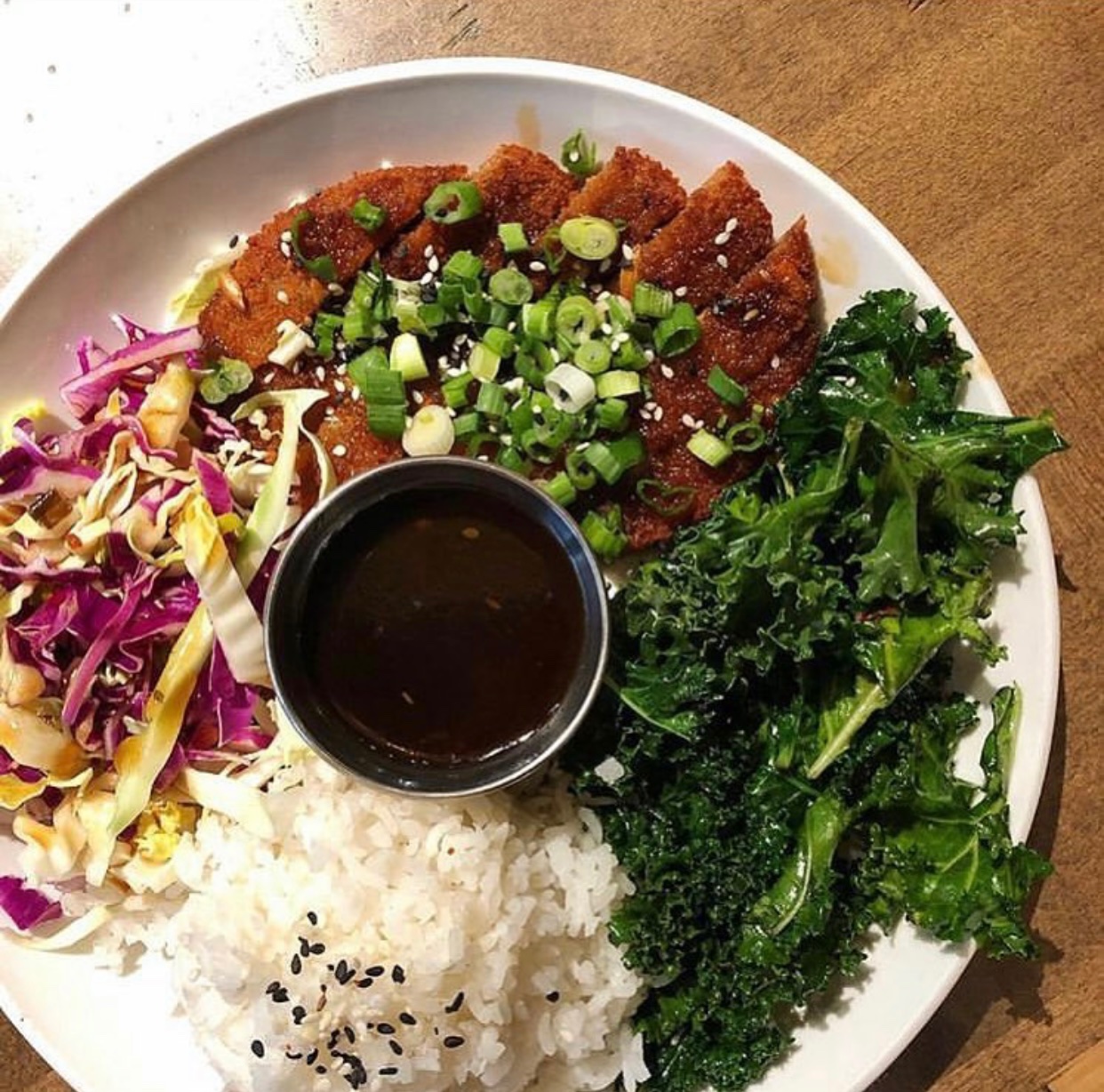 This downtown Los Angeles sports bar got a complete plant-based overhaul in 2017 thanks to Filipina chef Caroline Concha, who transformed the previous animal-heavy menu to a fun, fusion-filled lineup of comforting pub eats. Named the best female chef in Los Angeles (vegan or otherwise) in 2018, Concha showcases her deftness with flavor in offerings like the Viet Nom Nom Wrap—with citrus spare ribs, green papaya, daikon, Thai basil, and rice—and Impossible Burgers with plantains mixed in, served with gochujang aioli, pineapple, and shredded kale on a pretzel bun. 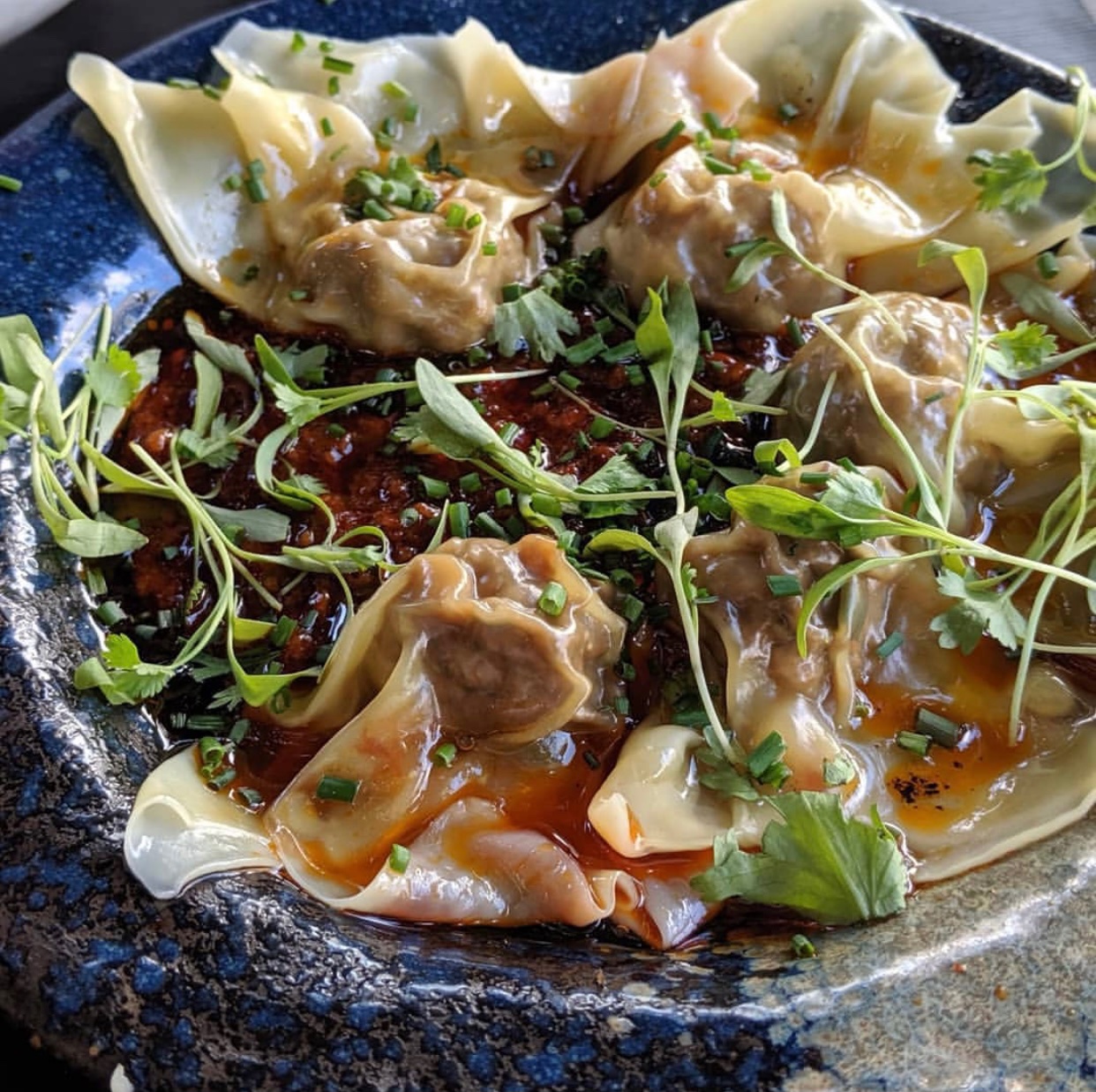 A standout among Portland’s excellent vegan eats, the cozy restaurant Jade Rabbit, forermly Ichiza Kitchen, boasts an impressive menu of carefully curated teas and an assortment of small plates and bowls that are available for delivery and pick-up. Owner Cyrus Ichiza, a former drag queen and traveling body piercer, draws upon his backgrounds in Filipinx and Taiwanese cuisine for pan-Asian dishes like Cantonese Cheung Fun (wide rice noodles filled with vegan shrimp, bacon, pork, and fried garlic) and chicken adobo marinated in coconut vinegar and black soy sauce on rice with calamansi dressing. 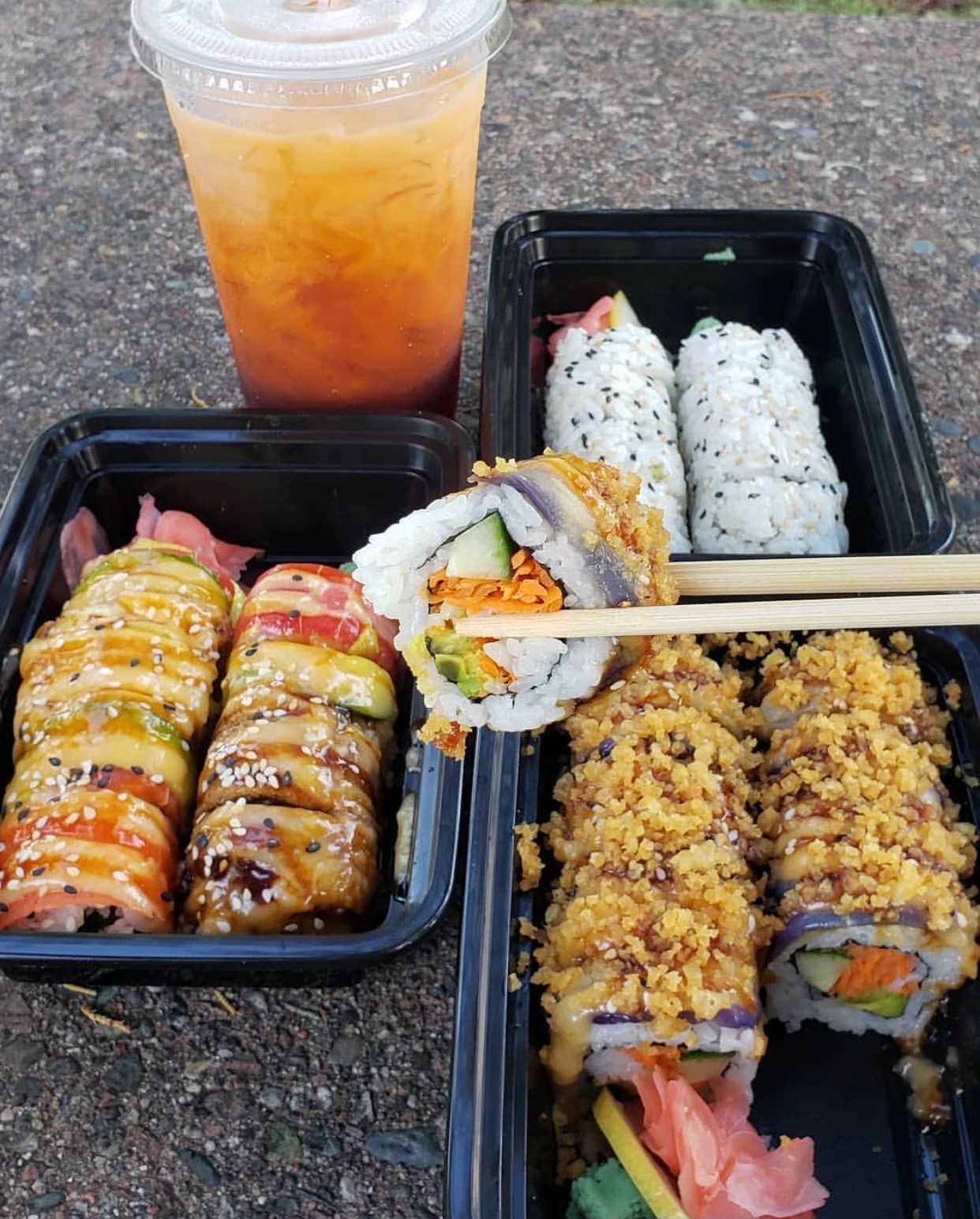 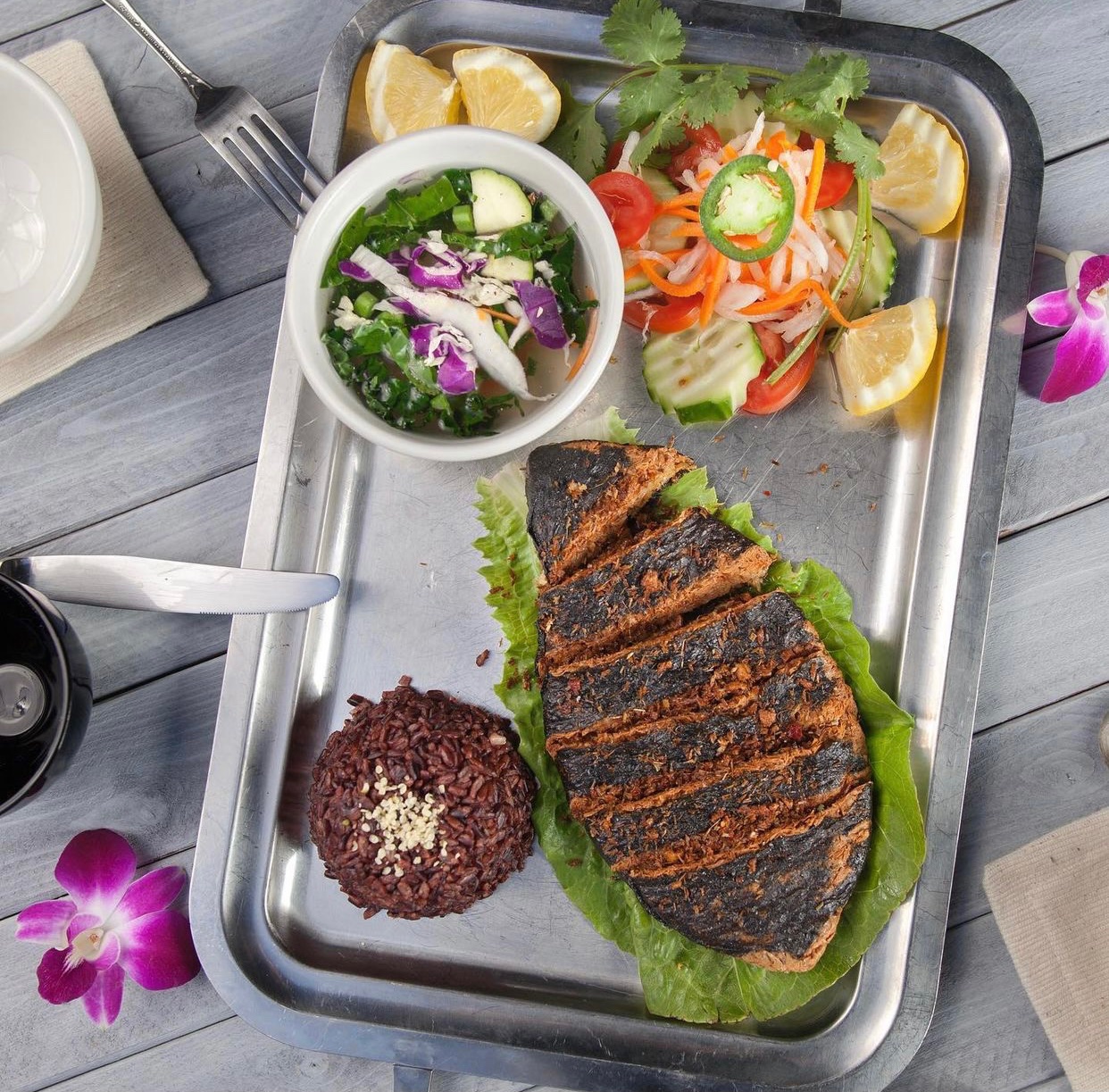 After a plant-based diet helped her to overcome a serious illness in 1997, Mai Nguyen set out to share her story with the world by way of her tasty, meat-free twists on Vietnamese food. Since then, Nguyen and her longtime partner Chef Ito have helped this stunning restaurant to be a long-lasting institution, garnering praise for its delightfully healthful, full-flavored cuisine. 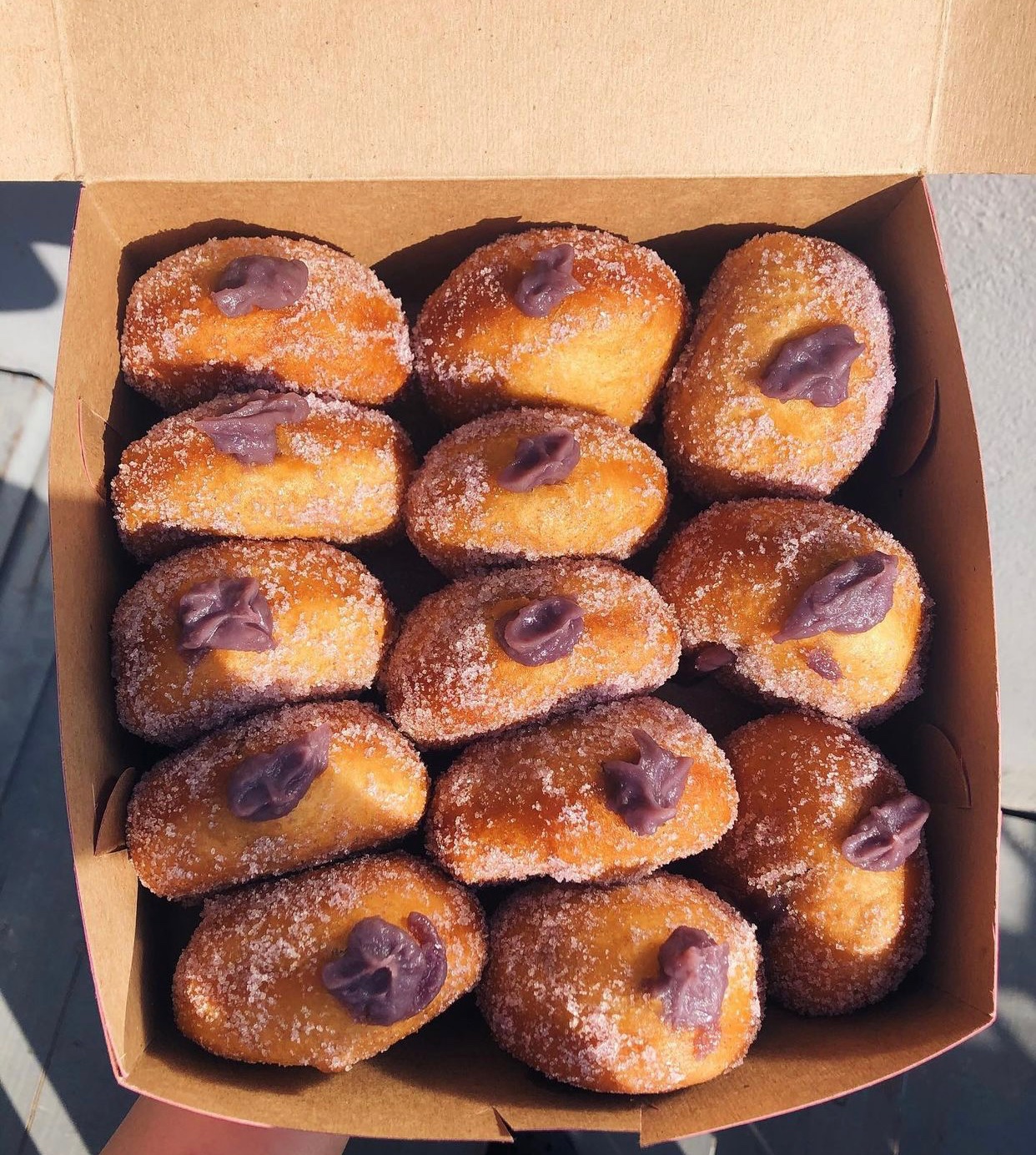 This Filipinx, woman-owned bakeshop and pop-up was a staple in the Brooklyn vegan scene before owner Kym Estrada packed up and moved across the nation to bless Los Angeles County with her sweet, often-purple pastries. Everything is fantastic, from her mango royale cakes with layered coconut cream, mango, and crushed coconut graham crackers to the silvanas made up of layers of aquafaba meringue wafers, Swiss buttercream, and gluten-free graham crackers. 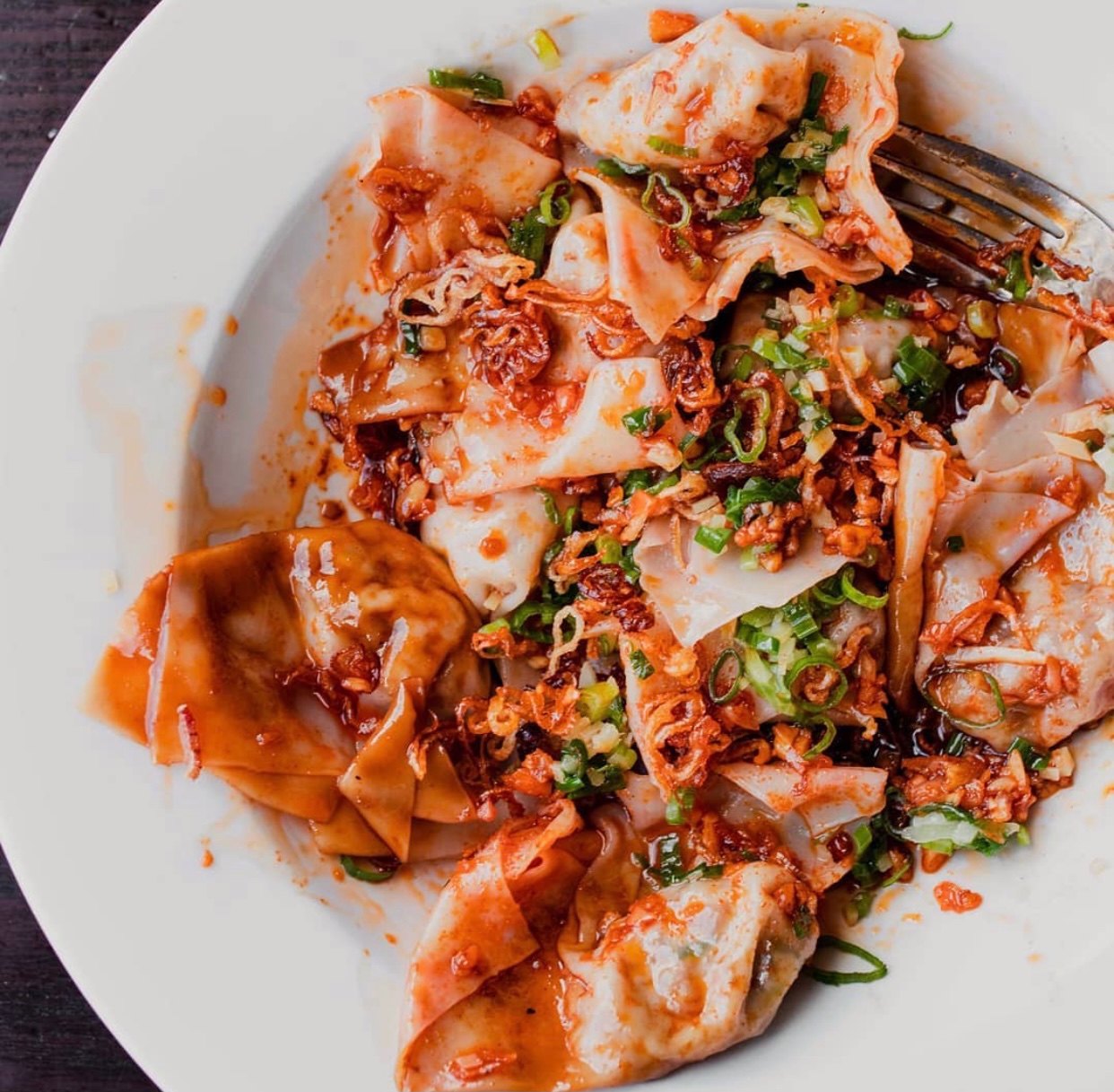 When Lauren and Johnny Soo started adopting a more plant-based diet, they knew their traditional Malaysian restaurant would have to soon follow. So in 2018, their über-popular, family-run eatery Soos began operating as a completely vegan kitchen two nights out of the week as Fat Choi, where customers can’t get enough of dishes like its crowd-favorite Mushroom Rendang, and Indonesian Opor Sayur with rice noodle squares, okra, long bean, tomato, cabbage, pea shoots in a kaffir lime coconut sauce with calamansi. Stuffed Roti, Mushroom Rendang, and Sago Sago are on regular rotation and diners can’t get enough. 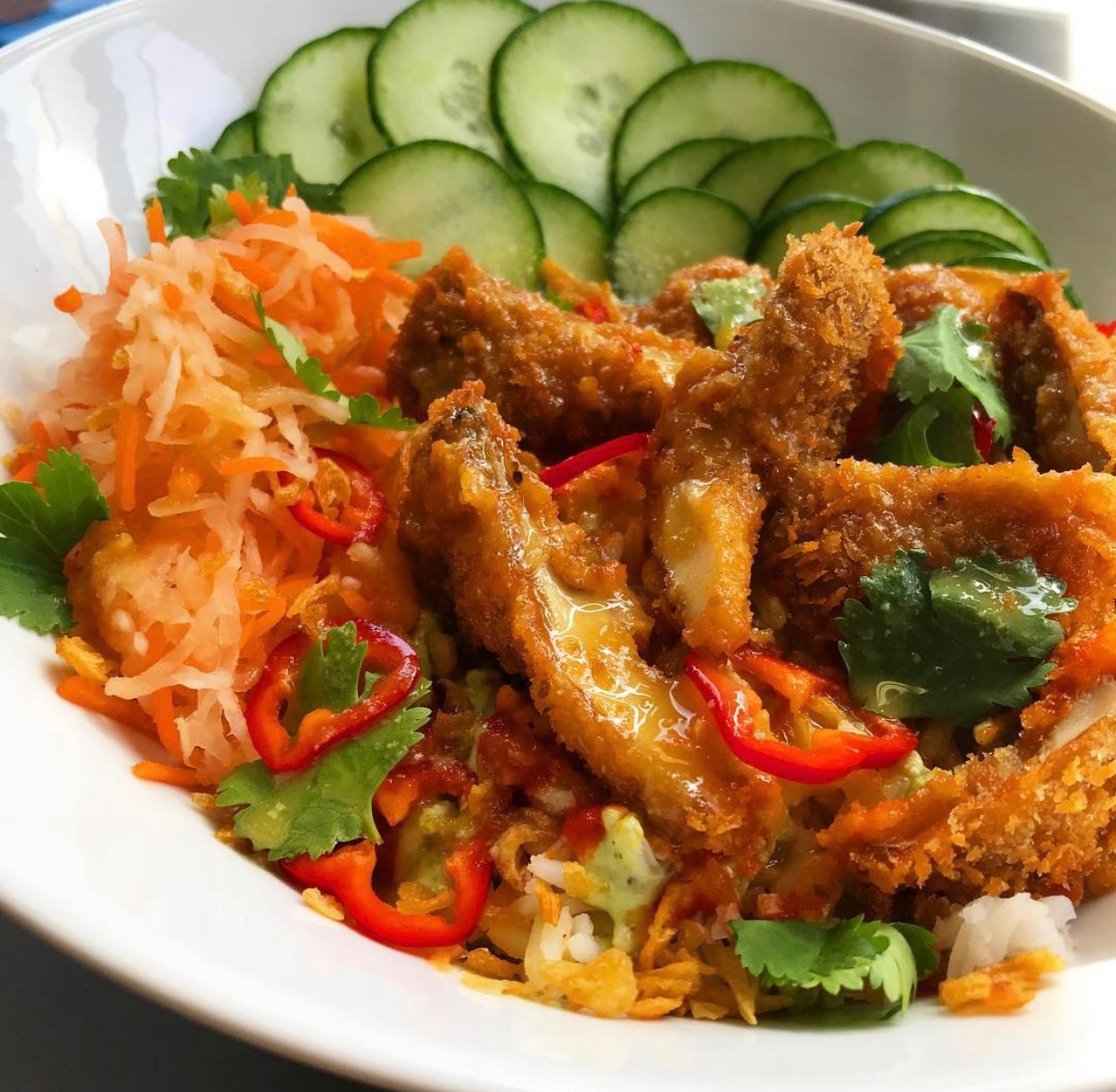 With years of working in vegan kitchens and super-successful pop-ups under her belt, Long Beach-resident Soozee Nguyen is preparing for her comfort food eatery’s first brick-and-mortar location this year. Known for its epic vegan Sunday brunches, towering sandwiches, and riffs on international cuisine, Wild Chive’s leagues of fans are eagerly awaiting the launch of its takeout menu, hoping menu favorites like grilled ham and cheese sandwiches nestled between caramelized potatoes make the cut. 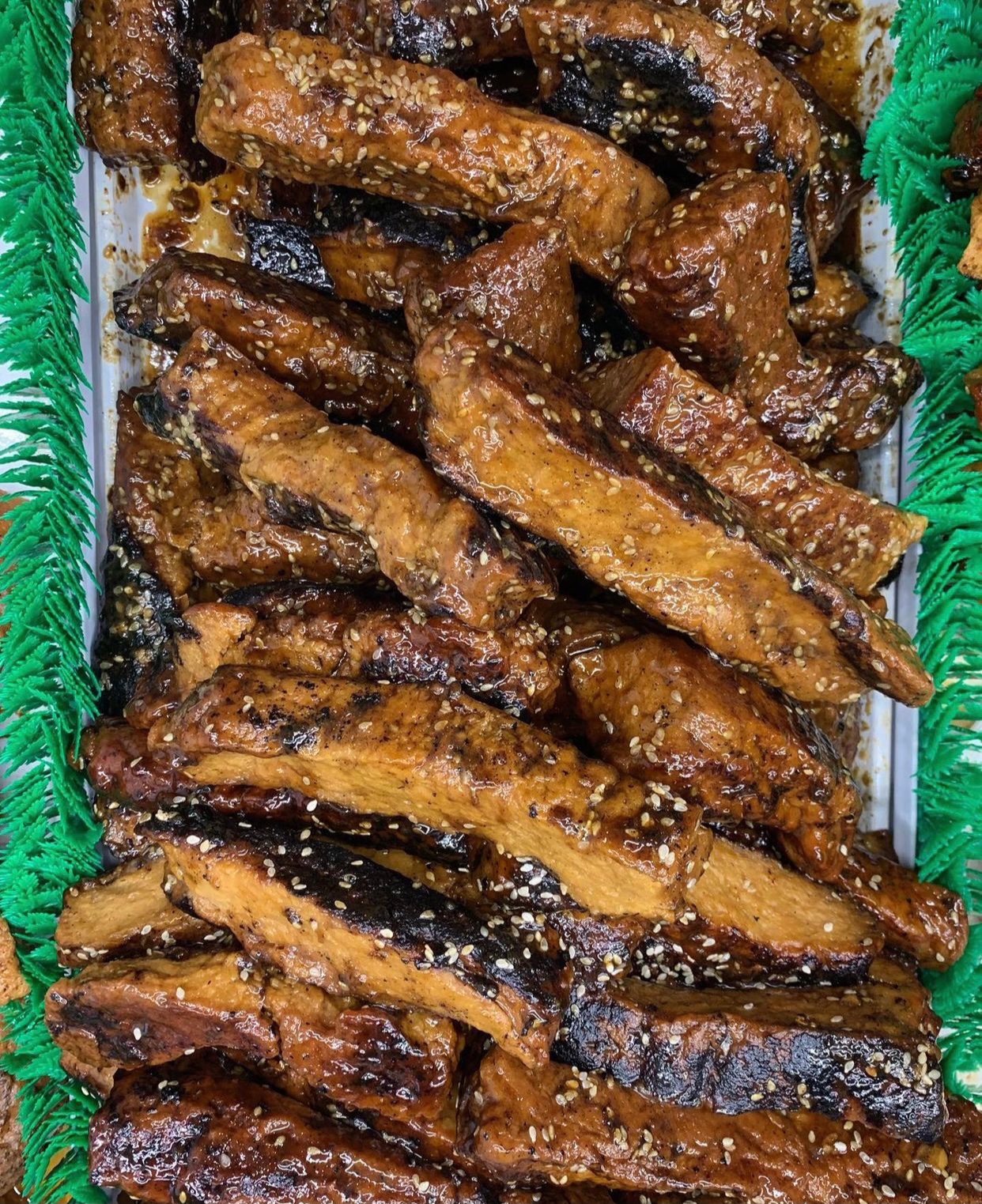 Growing up with a meat-heavy diet in Guam, Aubry Walch decided to follow a vegan diet, spending years perfecting meatless alternatives with the same flavors that she grew up with. After a few years watching Aubry thrive on a vegan diet, her brother Kale followed in her footsteps and the two later opened up Minneapolis’s first-and-only vegan butcher shop. From vegan jerky and filet mignon to Korean BBQ ribs, The Herbivorous Butcher’s vegan meats have reached high acclaim with features in Guy Fieri’s Diners, Drive-Ins and Dives and stints at Coachella feeding hungry festival-goers. 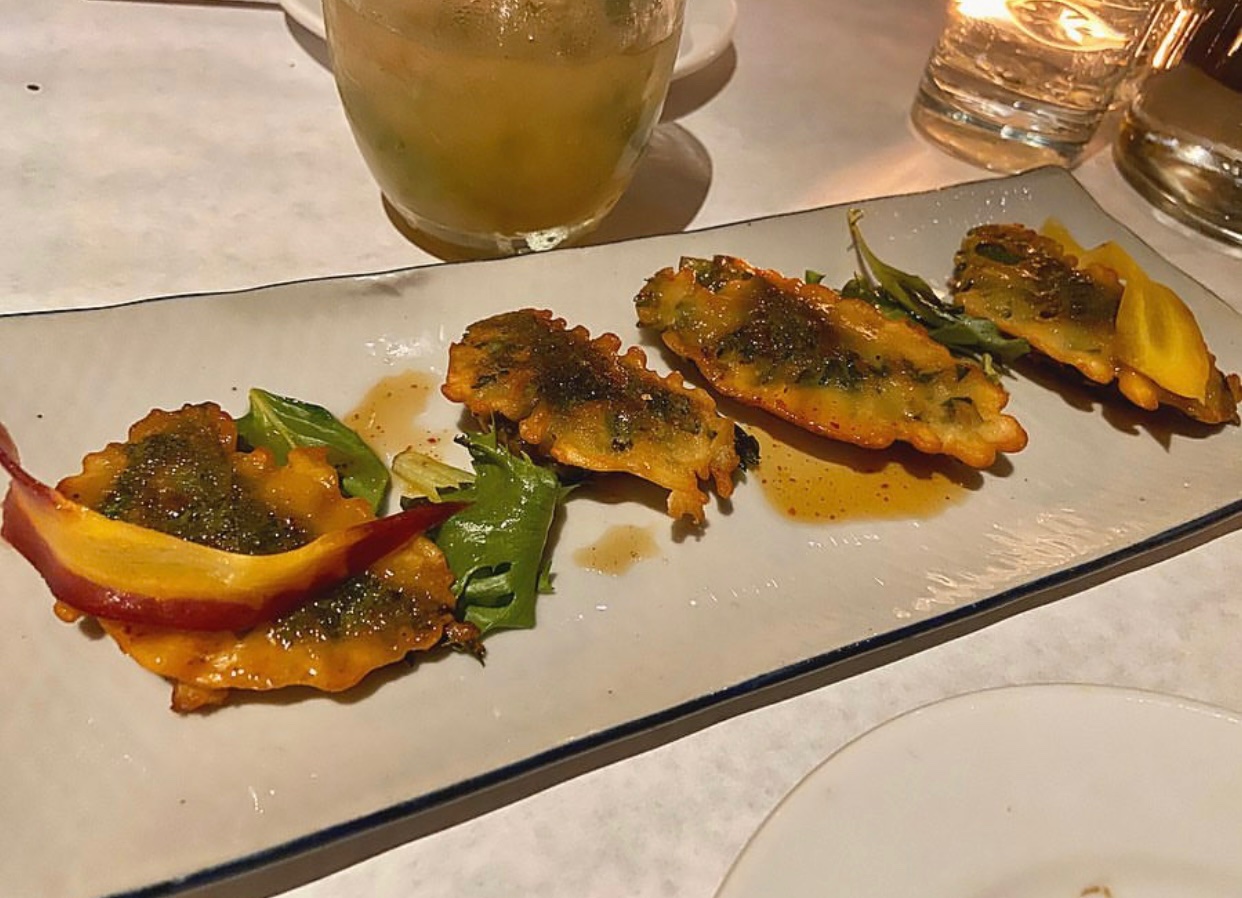 Tucked away inside a shopping mall lies a hidden vegan oasis owned by Tsuguhiro Morishima. A favorite among Hollywood celebs, Shojin draws from shojin ryō—a vegan/vegetarian Buddhist devotion diet that aims to purify the body and mind. The extensive menu features carefully crafted dishes such as Kabocha Pumpkin Croquette, Garlic Maitake Steak, and a generous selection of sushi. Pro tip: save room for the tempura banana and chocolate mousse cake. 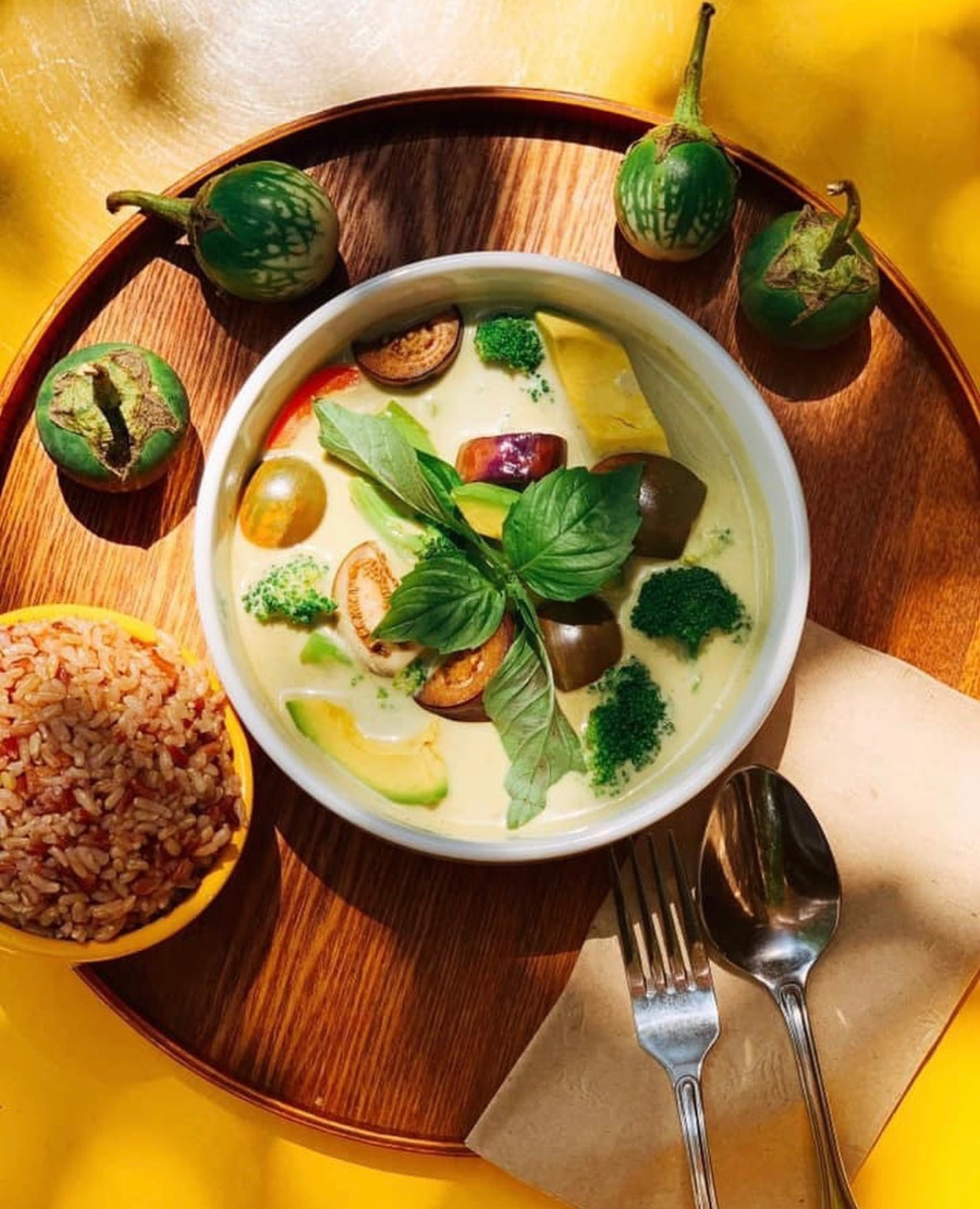 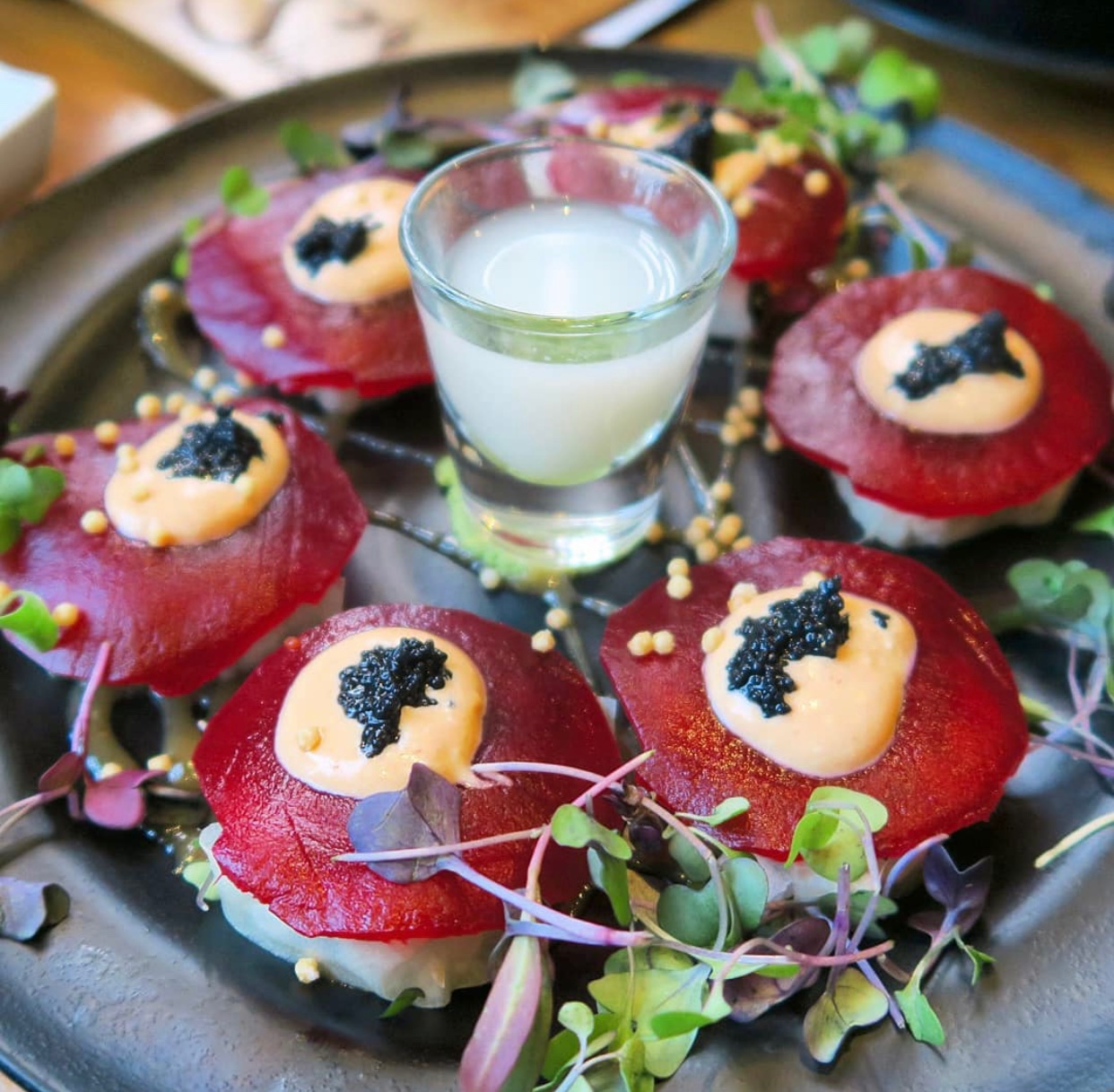 The Bay Area mainstay attracts long lines and wait times with diners coming from far and near to try a taste of Chef Kin Lui’s innovative, fish-free creations. Born in Hong Kong and raised in Hawaii, Lui brings plant-based sushi to the masses as a way to do his part for his first love, the ocean. And it shows through the cult-favorite sushi bar’s main mission: to conserve the ocean through responsible yet delectable dining. Savor vegan tempura rolls, ramen, and fish-less nigiri and never look back. 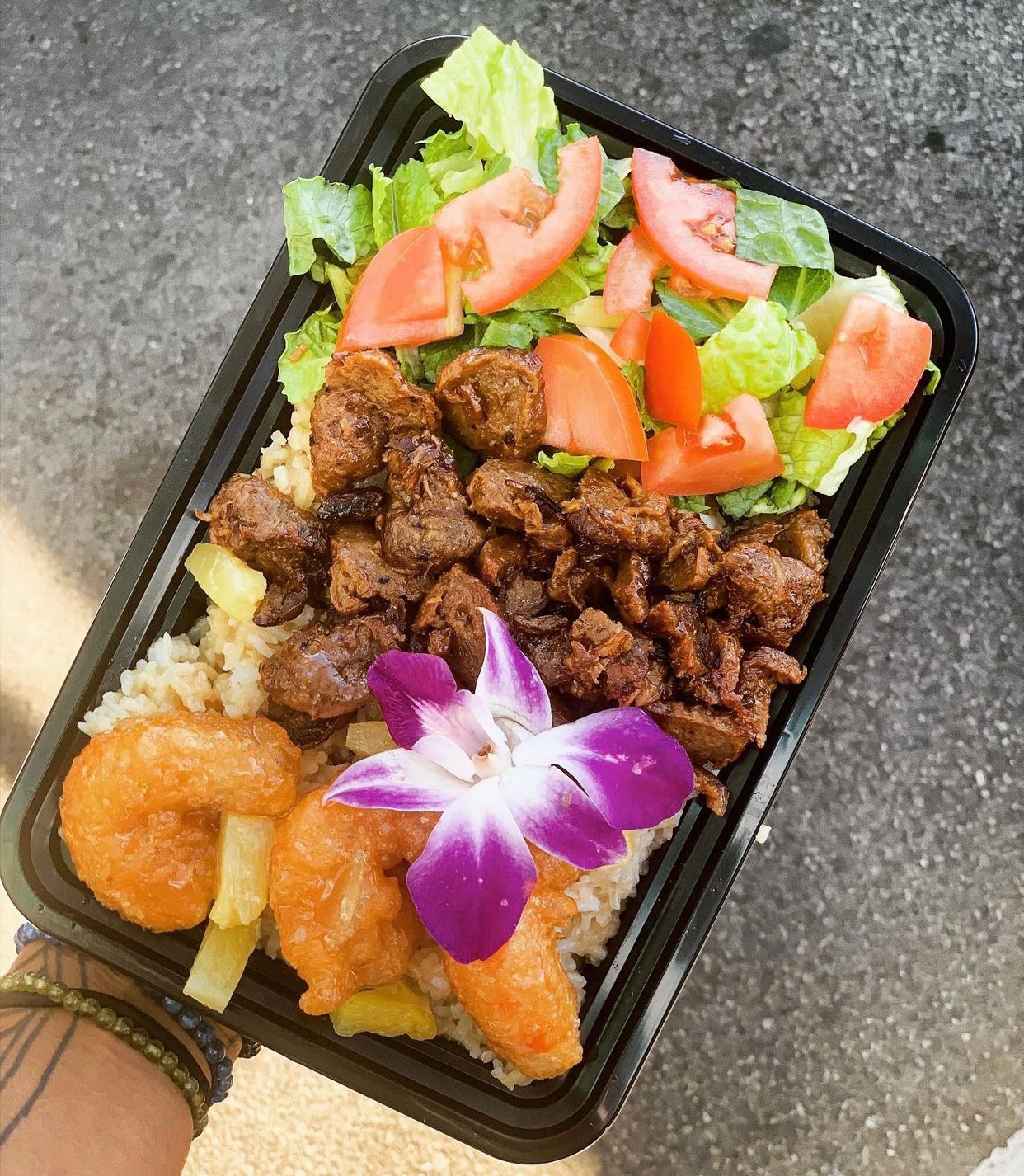 Srey Vegan’s The Hook Up

A fixture in Los Angeles’ vegan pop-up scene, Sreyneang Lor’s plant-based eatery is a godsend for her fellow Cambodian immigrants looking for a plant-based taste of home. Lor’s boldly flavored creations range from sticky-sweet, golden-fried pineapple walnut shrimp rice bowls topped with a tropical flower to num pang—Cambodia’s answer to the Vietnamese bánh mì. Wash it all down with a Cambodian iced tea and you’ve got yourself a meal to remember. 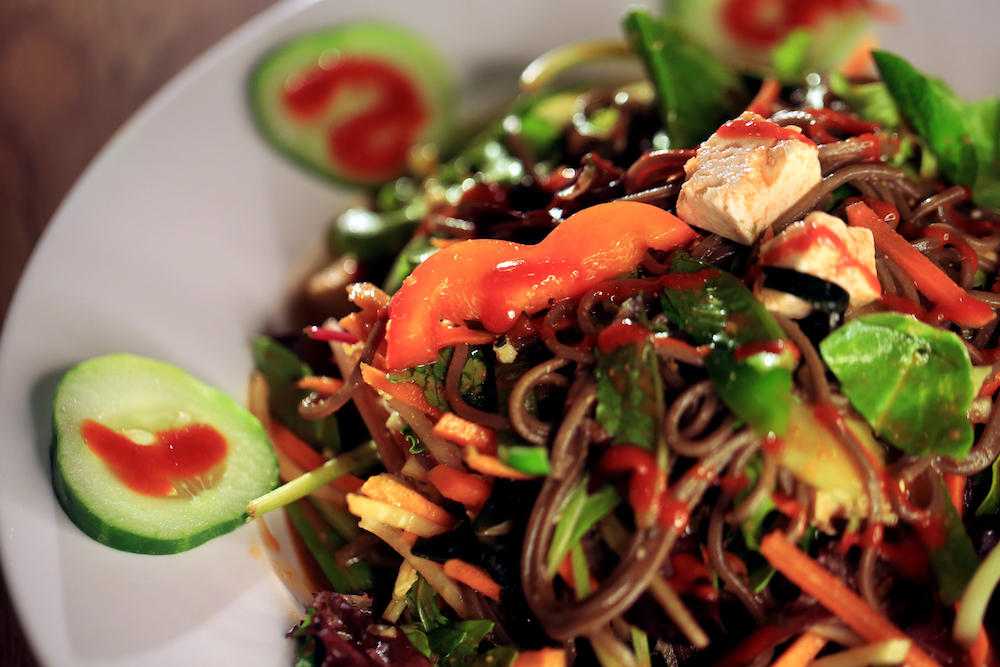 Founded by Chef Bill Choi, this Chicago mainstay has cranked out vegan dishes that marry traditional Korean techniques with Western flavors since 1995, and it’s all thanks to Buddhist monks. After monks at Choi’s Buddhist temple brought fresh produce for vegan Bi Bim Bop to the chef’s omnivorous restaurant, the dish was such a hit that he was moved to open an all-vegan restaurant. Don’t miss Choi’s vegan dumplings, grilled tofu stir fry, or spicy noodle soup. 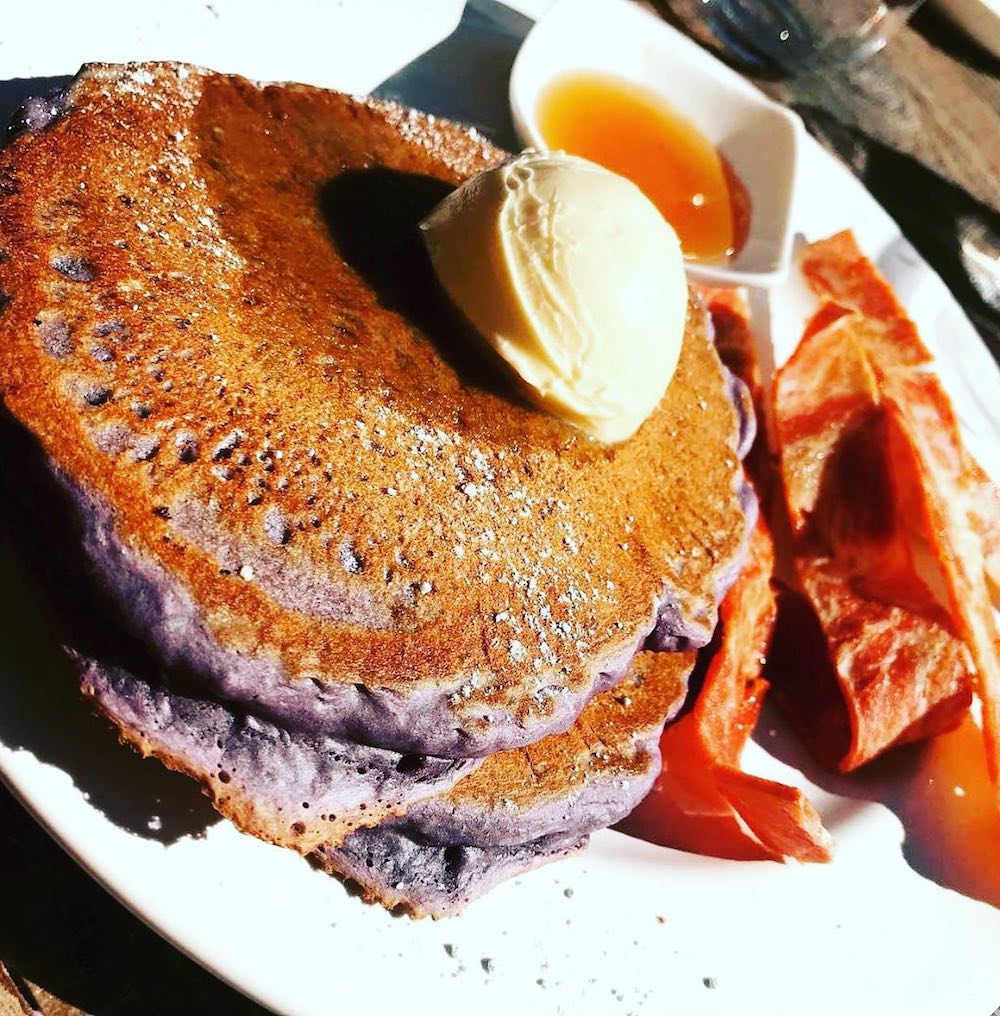 Ten years after building a career in corporate America, Reina Montenegro walked away from the life she knew to follow her passion for food and cooking. After launching Nick’s Kitchen, the San Francisco Bay Area’s first Filipinx restaurant, Montenegro built the Nick empire, successfully running three locations. Today, the Philippine-born chef has pivoted to her own brand, Chef Reina, where she whips up fluffy ube pancakes, savory chick’n adobo, and Omnipork lumpia. 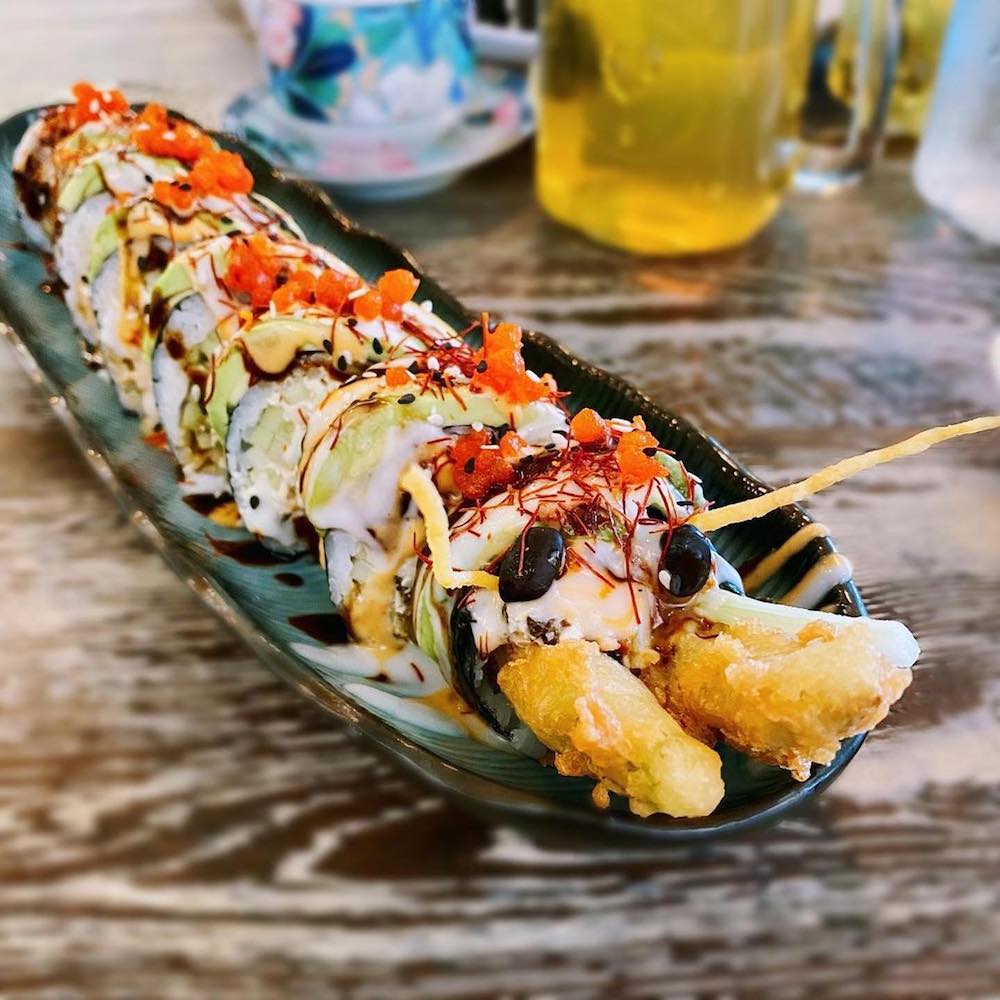 Tucked away in Studio City, this all-vegan sushi and ramen shop offers over 20 different specialty rolls and fragrant bowls of creamy ramen made with more than 20 bold, natural ingredients for an explosion of flavor. Founded in 2016 by Shanshan Liu Estacio, Gokoku is a must-stop for its spicy Mayu Garlic Jalapeño Ramen, crunchy vegan shrimp rolls, and bento boxes. 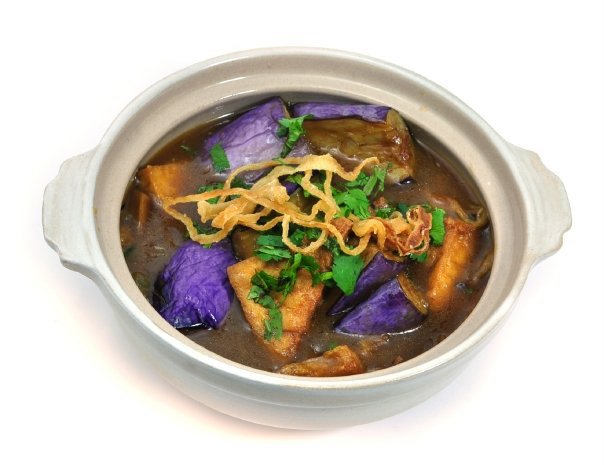 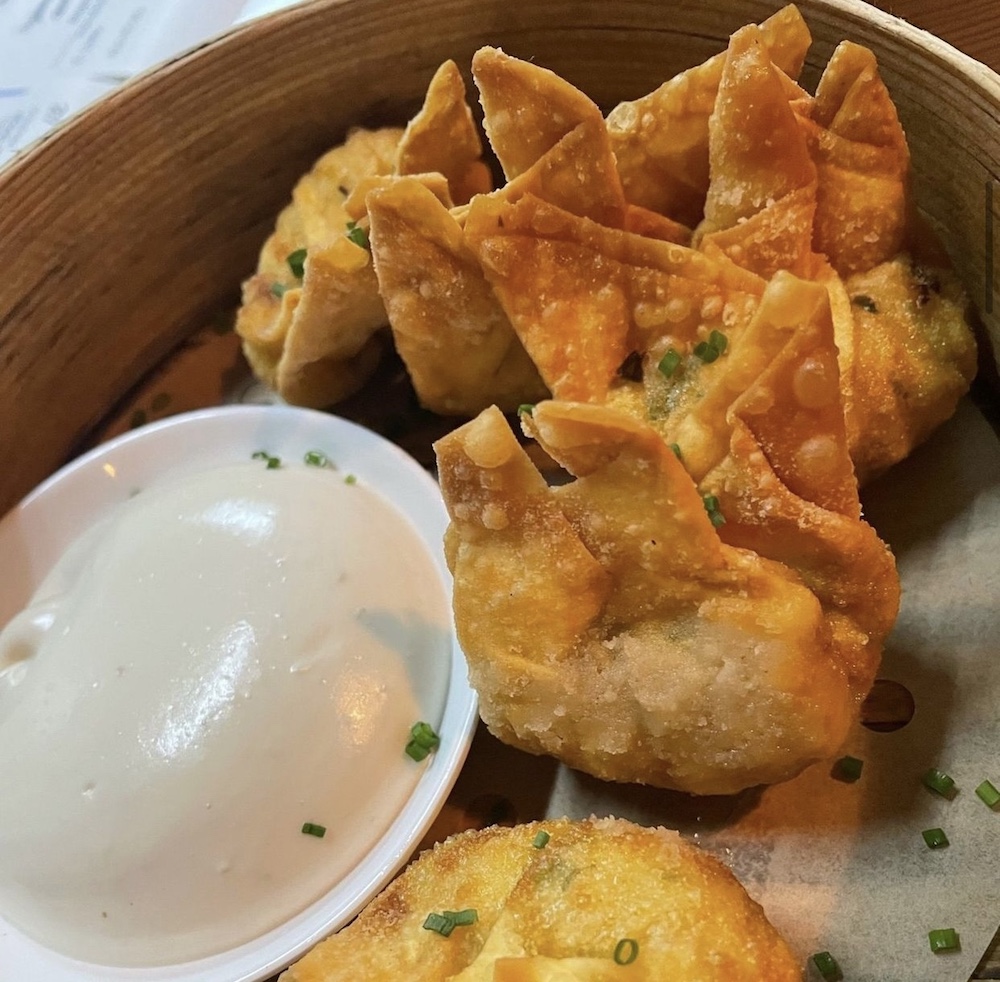 Husband-and-wife team Alex Falco and Huimin Zhu are bringing a fusion of Asian flavors with a plant-based twist to the heart of Miami. On the dim sum menu, classic bao buns, avocado spring rolls, and Cuban Corn Wontons can’t be missed. But if you’re looking for something to satisfy your sweet tooth, the five-spice dusted bao beignets, chocolate ganache dumplings, and matcha crème brûlée are out of this world. 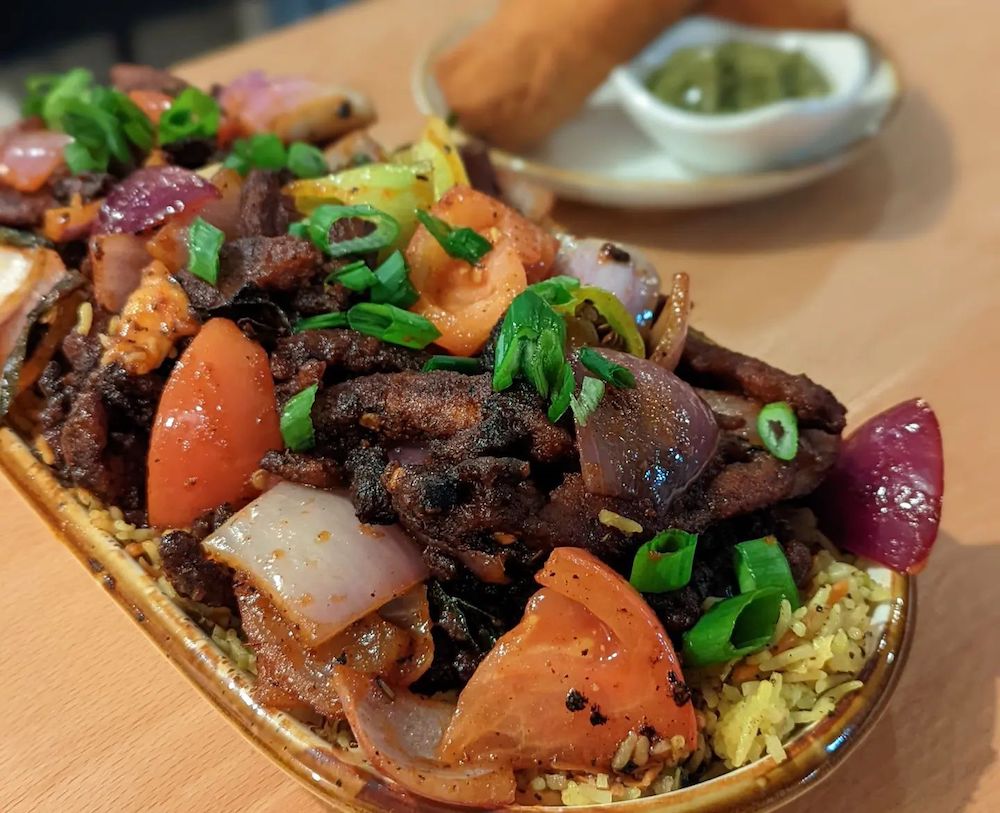 Although mirisata loosely translates to spicy curry, there’s more to be explored on the menu at this employee-owned Sri Lankan eatery. The co-operative taps into its owner-workers’ family traditions and recipes to whip up jackfruit-stuffed croquettes, fishless patties with a side of hot green chili sauce, and crispy fried rolls filled with Impossible beef and potato curry. For dessert, don’t skip the flan-like watalappan made from a blend of cashews, creamy coconut milk, and thick kithul jaggery syrup. 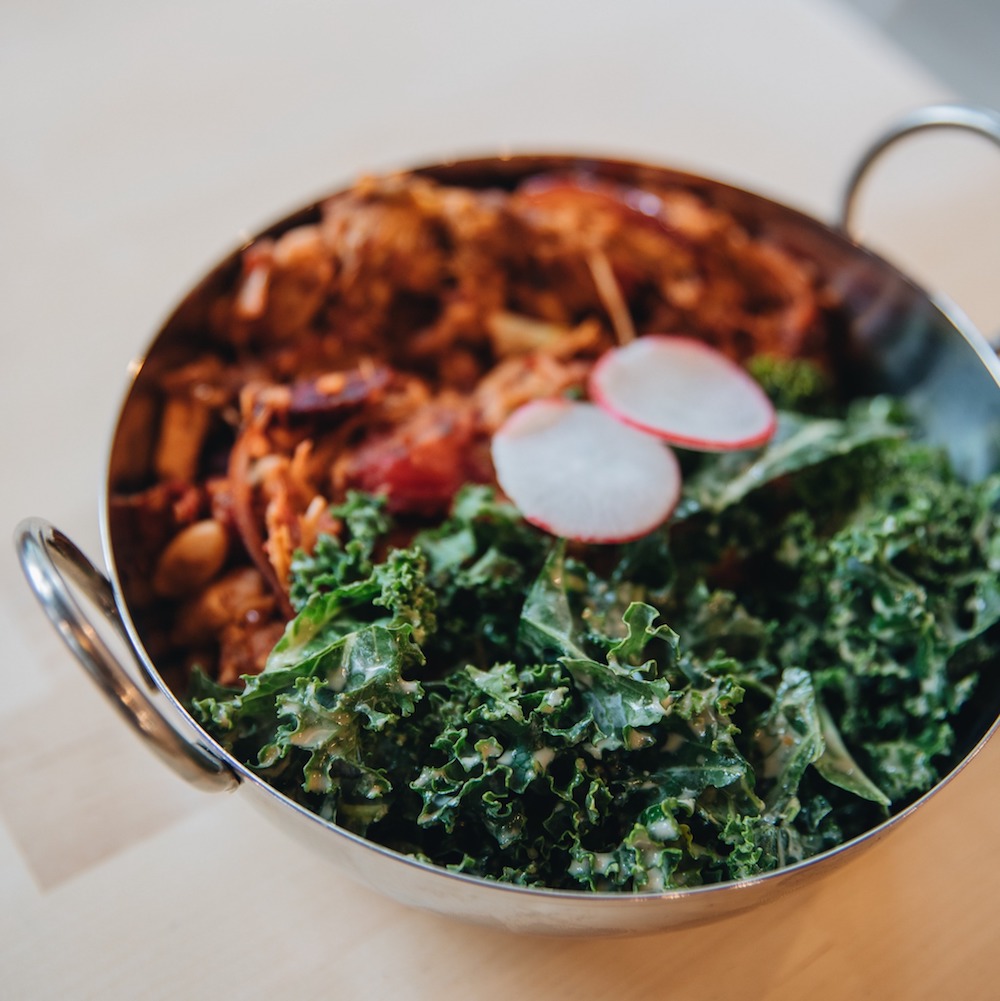 This chain of plant-based Indian restaurants founded by prolific chef and restaurateur Sanjay Chandrasekaran has called the PNW home for nearly a decade. And with a menu that blends the chef’s Indian heritage with the Southwestern flavors of his childhood in New Mexico, it’s no surprise patrons can’t get enough of this vegan grub. Opt for the soy chicken drumsticks lathered in creamy South Indian poppy seed curry, and wash it all down with an ice cold TLC cocktail made with tequila, lime, orange juice, and tamarind. 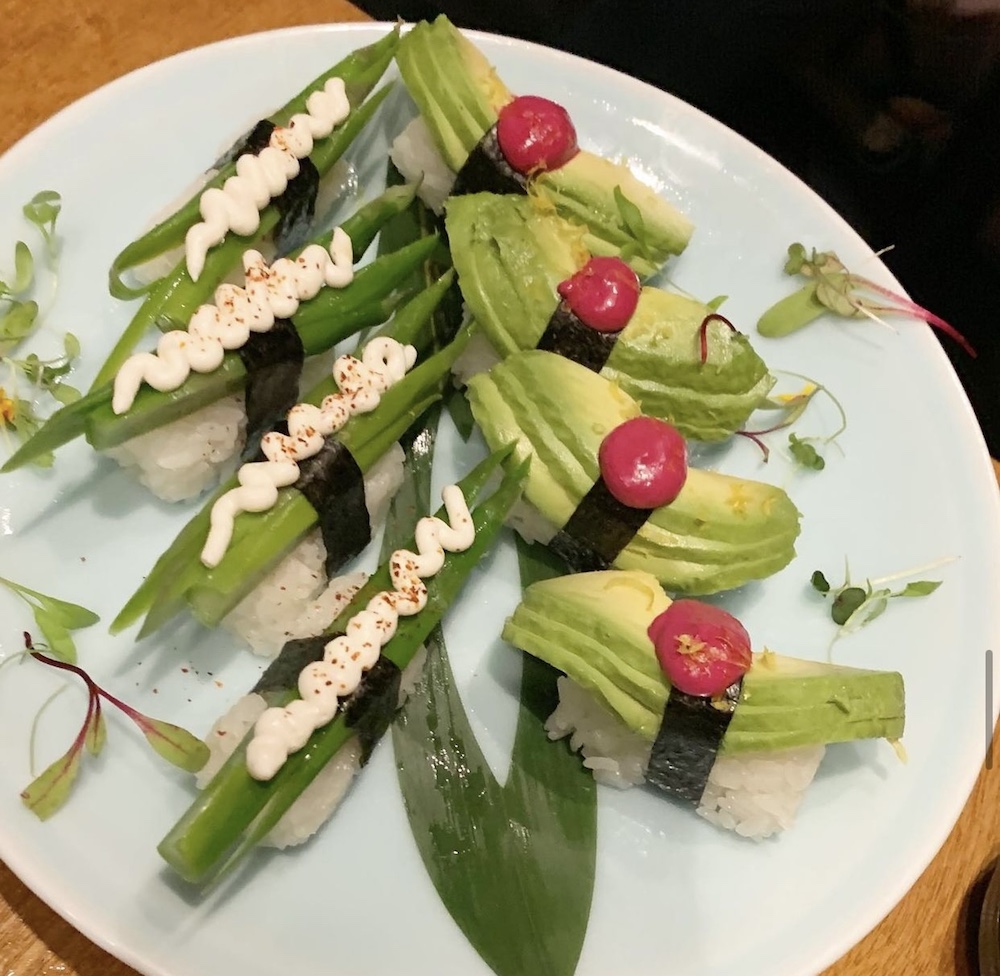 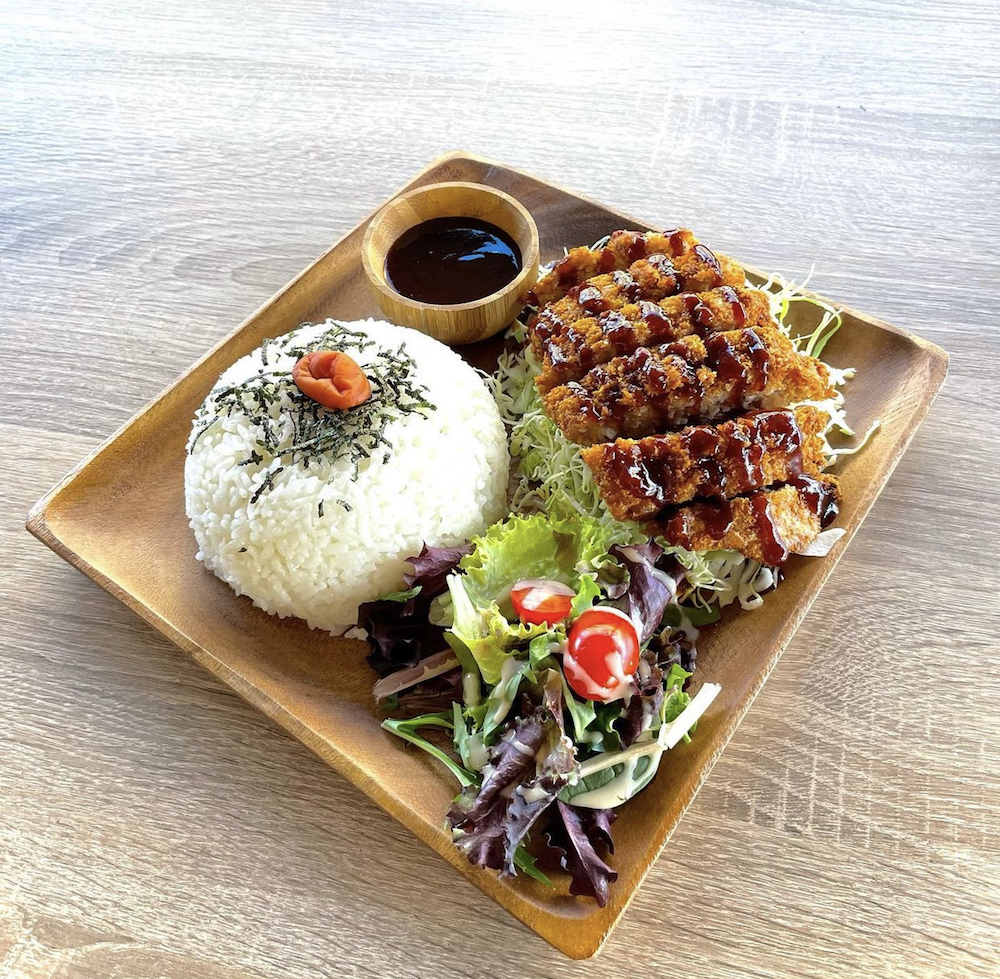 LA’s all-vegan sushi truck has found a permanent home right in the heart of Hollywood. The plant-based restaurant boasts an extensive menu of Japanese dishes such as spicy snow crab hand rolls; chewy yakisoba noodles with cabbage, carrot, mayo, and seaweed; and even squid nigiri. Visit with a group of friends for a chance to dive into the family-style platters.
Where to follow: instagram.com/theplantlabvegan
Learn more here