On July 8, vegan influencer Tabitha Brown released her limited-edition Sunshine All Purpose Seasoning in partnership with spice brand McCormick—which promptly sold out of the salt-free spice blend in 39 minutes. McCormick plans to restock Brown’s seasoning in the fall but in the meantime, a black market of sorts is forming to bring fans the in-demand seasoning. On Ebay, several listings for the seasoning are currently live, with some bids reaching upwards of $120 for a two-pack of the spice blend. The lowest starting bid for the seasoning pack is currently $14.94. However, that listing comes with a $69.00 shipping fee, putting the price astronomically higher than the seasoning’s original price of $14.95 per pack of two.

For those that can get their hands on Sunshine seasoning, on the black market or otherwise, Brown developed several recipes to showcase its summery Caribbean-inspired flavor profile, including Sunshine Shick’n (shiitake mushroom-based vegan chicken stir-fry coated with a sweet and savory sauce); Maple Roasted Sweet Potato Wedges; and Chicky Farro Bowl (farro bowl topped with roasted chickpeas coated in Sunshine Seasoning). 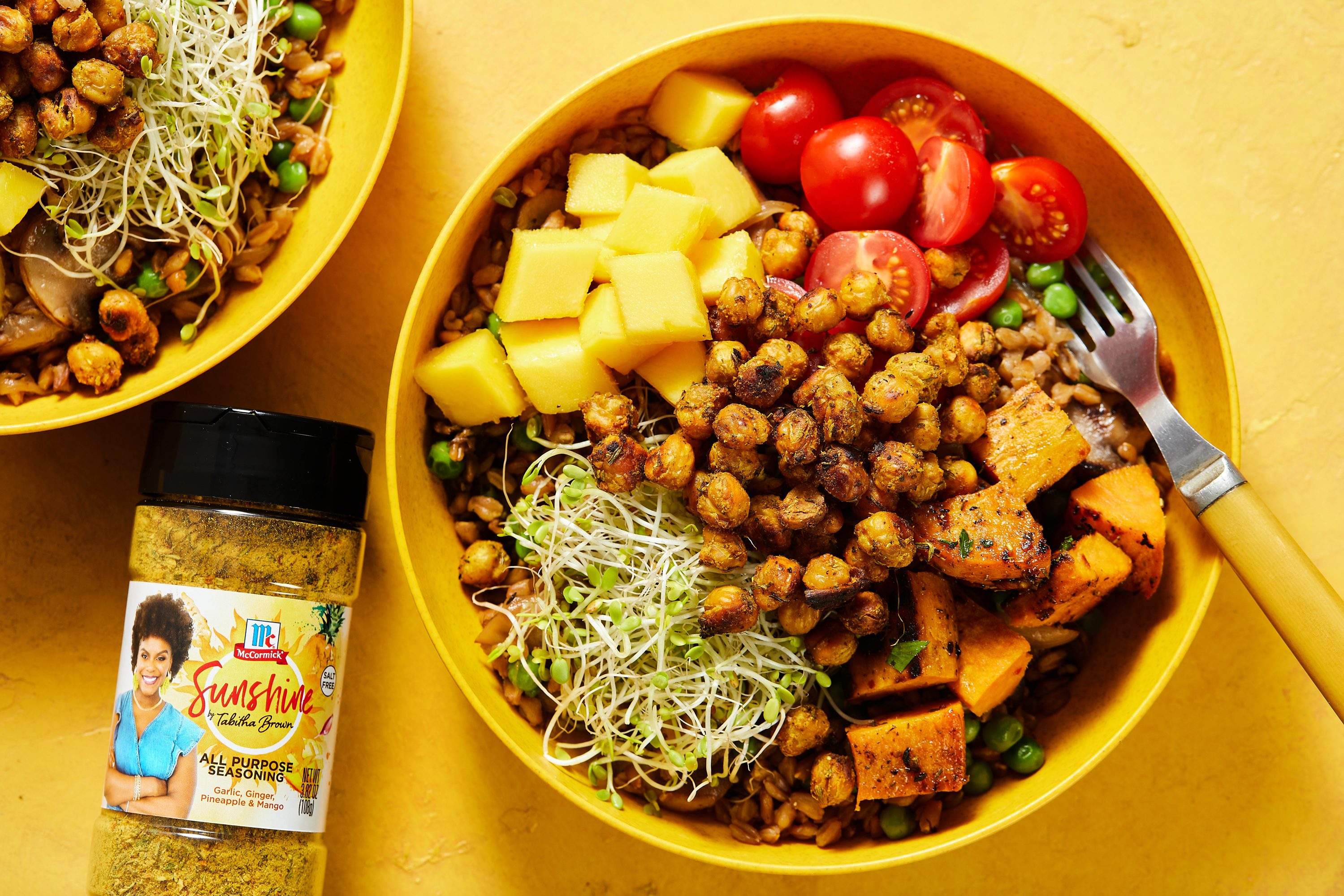 “Sunshine for me is about spreading positivity. I always say, ‘Have a good day and if you can’t, don’t you dare go messing up nobody else’s.’ This seasoning is all about bringing that radiance and positive energy into your kitchen,” Brown said. “You can use the Sunshine All Purpose Seasoning on any dishes you have planned this summer, whether it’s for heading out to a BBQ or cooking at home because that’s your business.”

Brown was hands-on with the formulation of the Sunshine seasoning, which is made with her go-to garlic powder, ginger, thyme, turmeric, allspice, and a dash of mango and pineapple powders for sweetness. After the wildly successful launch of the Sunshine seasoning, Brown will continue to represent McCormick as a spokesperson to help home cooks incorporate spices into their recipes.

“Tabitha’s genuine and fun approach to cooking the way you want, while also educating her audience about plant-based alternatives, embodies our belief that whatever you make with McCormick spices, it’s gonna be great,” said Alia Kemet, Vice President of Digital and Creative for McCormick. 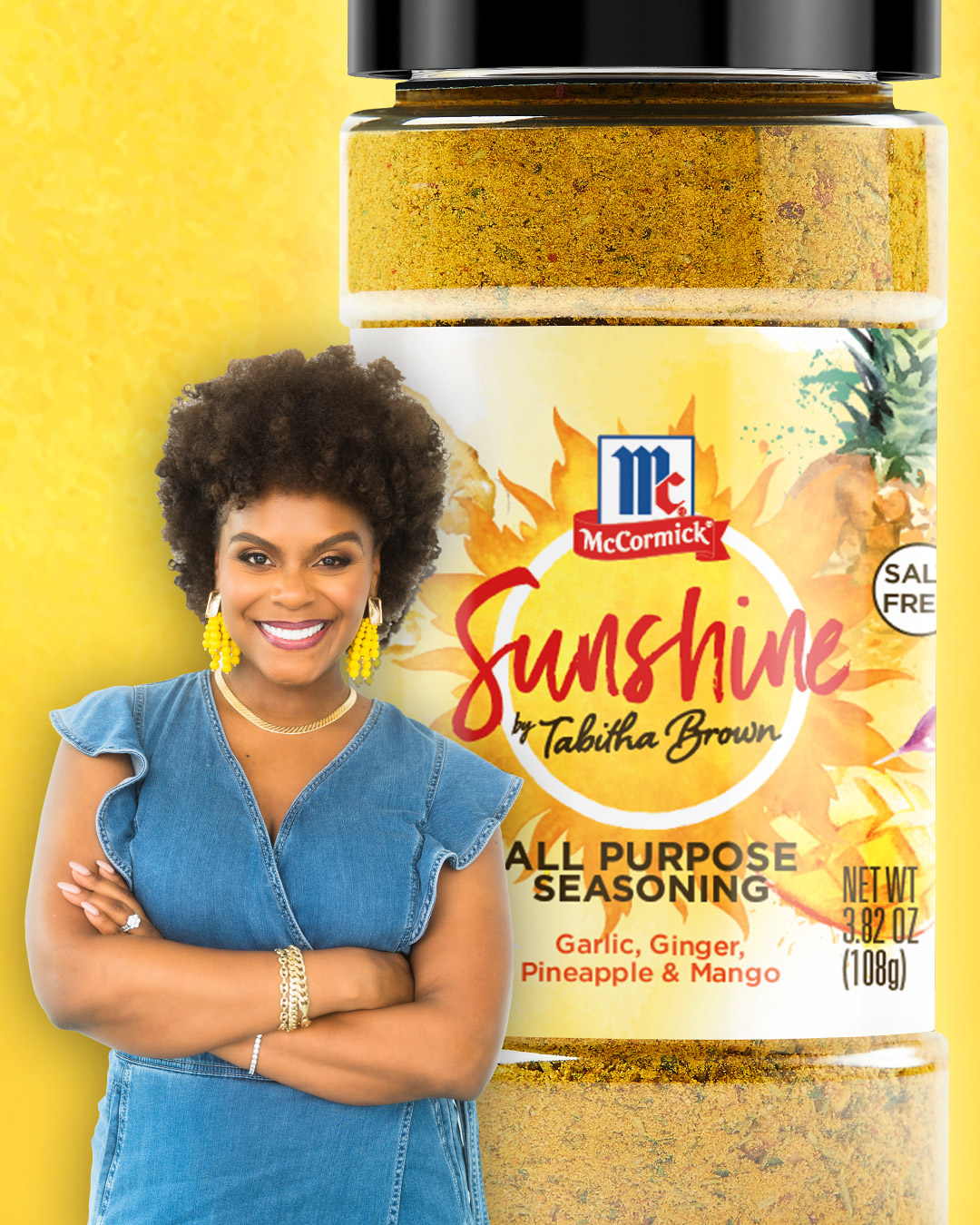 Brown went vegan in 2017 and gained popularity after posting a video of herself eating a vegan “TTLA” sandwich from Whole Foods Market in her car. Since then, the actress-turned-vegan influencer has risen to astronomical fame, including on TikTok where her vegan carrot bacon recipe went viral last year, landing her on TikTok’s top creator list in 2020.

After creating engaging live plant-based cooking videos on Facebook, the 42-year-old North Carolina native started making moves outside of social media. Earlier this year, the vegan actress joined the cast of Showtime series The Chi in its fourth season, after starring in two seasons of her own show called All Love on the Ellen Network. In addition to making multi-media appearances, the NAACP award-winning star has lent her voice to the Calm app to help fans relax, launched Donna’s Recipe (a company named after her afro to help women of color grow their natural hair), and plans to release her first book Feeding the Soul (Because That’s My Business) this fall.

This month, Brown partnered with housewares company Williams-Sonoma to create a limited-edition spatula, the sales of which benefit nonprofit No Kid Hungry. The design for the whimsical spatula was created by Brown and her young son Quest and features Donna, along with the catchphrase “like so, like that.” Like Brown’s Sunshine seasoning, Williams-Sonoma sold out of the spatula in a matter of minutes online.