The vegan movement has reached a critical tipping point. Case in point: the abundance of vegan options in fast-food restaurants. We have the easily veganizable Impossible Whopper at Burger King, the Beyond Famous Star at Carl’s Jr., and the vegan as is Epic Beyond Fresh Guacamole Burrito at Del Taco. That box has been checked. Enter the era of all-vegan fast-food chains. It’s not just Veggie Grill anymore. Plant-based drive-thrus and multi-location fast-casual eateries slinging vegan beefy burgers and fries are cropping up across the country, and we are here for it. Before you cruise through the drive-thru of the nearest mainstream chain, check to see if one of these vegan fast-food chains is nearby. 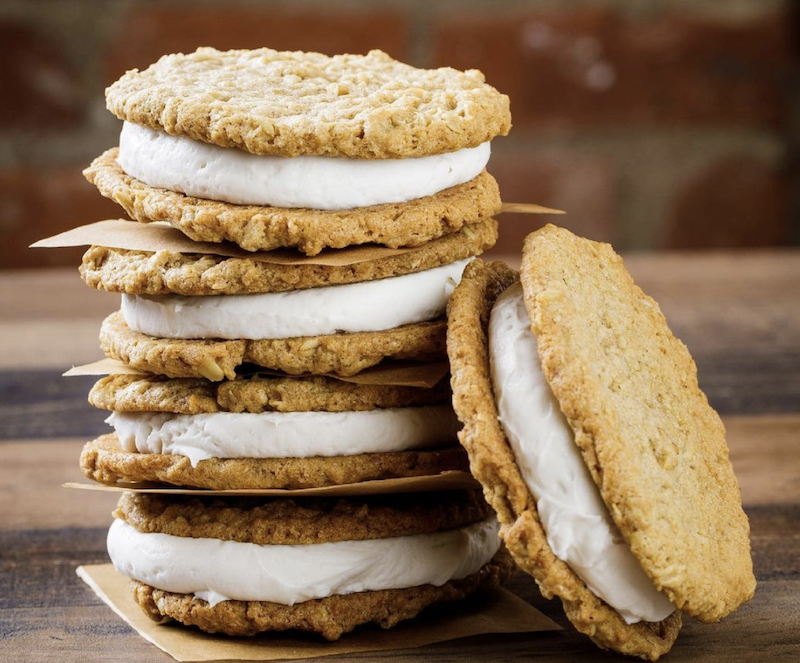 This fast-casual chain originally leaned more toward healthy bowls, salads, and sandwiches, but since its founder chef Tanya Petrovna sold the restaurant in 2012, the menu has steadily swapped out much of the greens, grains, and beans for stacked burgers and one-off fast-food specialty items. Patrons can still find some of Petrovna’s original creations in the form of the Taco Salad or Twister Wrap, but those looking for a more savory spin can opt for sweet potato fries, buffalo chicken tenders, and a BBQ Brisket Burger. Local tip: get dessert. The oatmeal creme pie and peanut butter parfait have outlasted the sweeping menu revisions and are the cherry on top of your vegan meal. 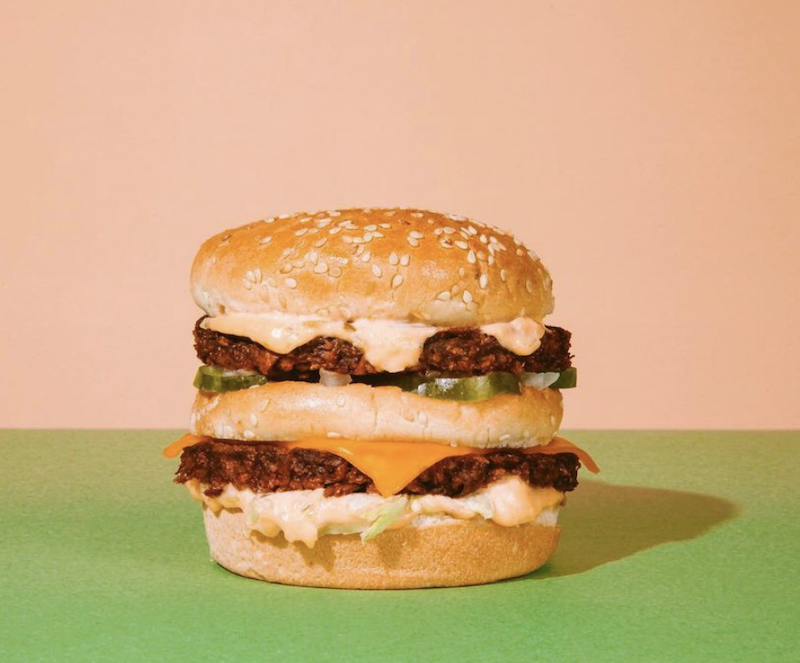 Commonly referred to as “Plant Power” by locals, this burger chain launched in San Diego and made its way north. It now has over 10 locations stretching from San Diego to Sacramento, some overtaking former non-vegan drive-thrus, and even Las Vegas. Expect a streamlined menu of vegan burgers, fried chicken sandwiches, nuggets, fries, and a few entrée salads for those in search of fresh options on the go. 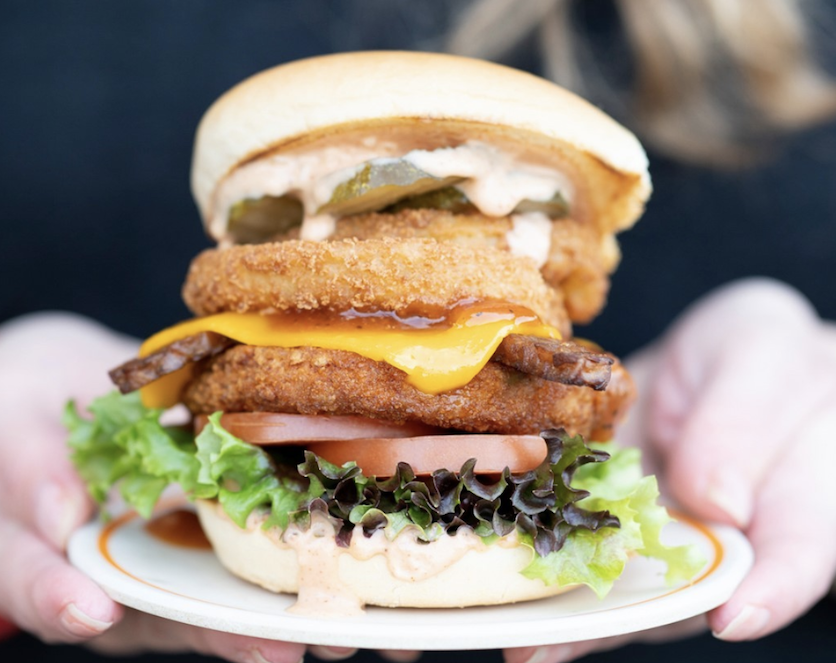 The name of this bi-coastal chain really spells it out for you—they do burgers, and they do them well. Next Level Burger operates under the goal of becoming the future wave of fast food—where customers eschew animal products for the equally delicious plant-based fare. Many locations are planted inside or adjacent to a Whole Foods Market, though stand-alone spots exist as well. Yes, of course, get a burger, perhaps even a Clucker bucket of chicken and crinkle-cut fries, but the Next Level Shakes are … well, you understand. 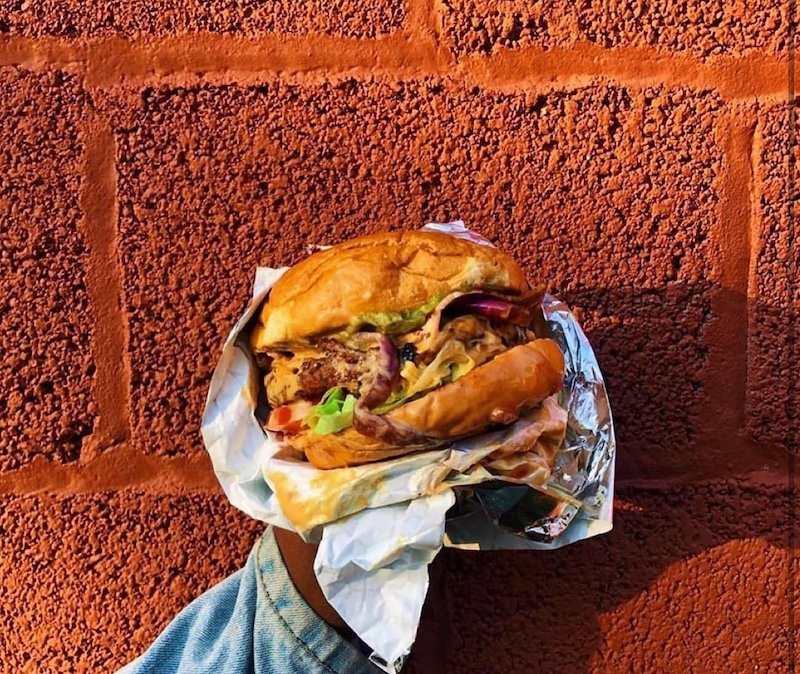 Get your vegan fast-food fix from morning to night at this East Coast vegan chain. The menu spans classic breakfast sandwiches layered with sausage, egg, and cheese to handholds, fries, and shakes for the lunch and dinner crowds. Protein options range from Beyond Burgers to tempeh and grilled portobello mushrooms, so there’s something for everyone. When browsing the menu, give the chick’n sandwich section some thought—this place does vegan chicken right. 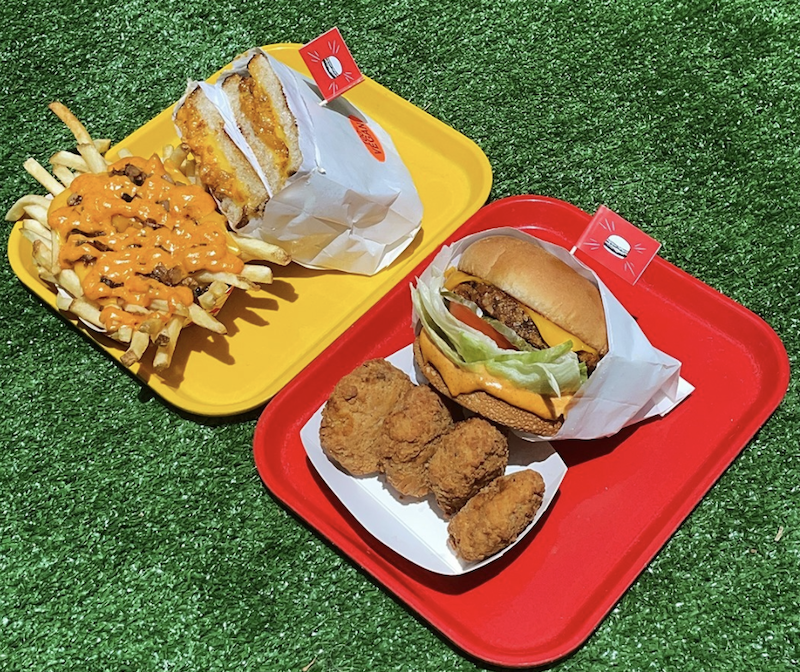 Go for the vegan burgers, stay for the 2,000 Island Sauce. This Los Angeles microchain went full vegan in 2020 and now offers a menu of plant-based cheeseburgers, fries (both loaded and plain), messy not-burger sandwiches, and tahini milkshakes. Its popularity has soared since it made the switch, prompting the owners to set up a Goldbelly account and sell burger kits nationwide. There’s no drive-thru, but direct shipping seems like a more convenient option anyway. 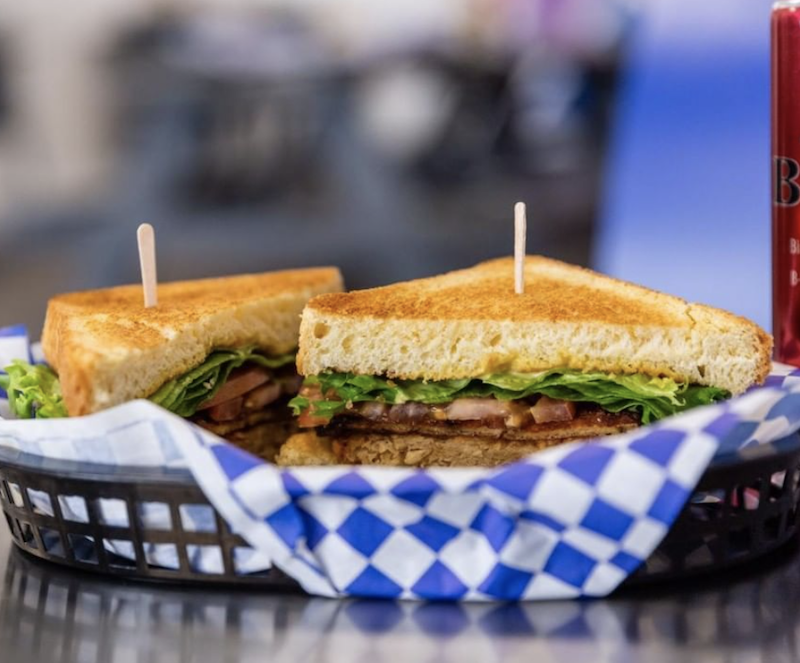 Small but mighty, this Colorado chain serves an award-winning burger. Ranked as the Best Vegan Burger by HappyCow and voted Best Plant-Based Burger at the SEED Food and Wine Festival, the nation needs more Meta locations. The housemade patty is just one part of the delicious whole—the thoughtful toppings really put this chain into the winners’ circle. For example, the popular Flatiron Burger features a homemade patty, shaved Brussels sprouts, shallots, grilled mushrooms, and vegan cheese. Add a side of waffle fries and extra sauce, and you’re in for a fantastic fast-food meal. 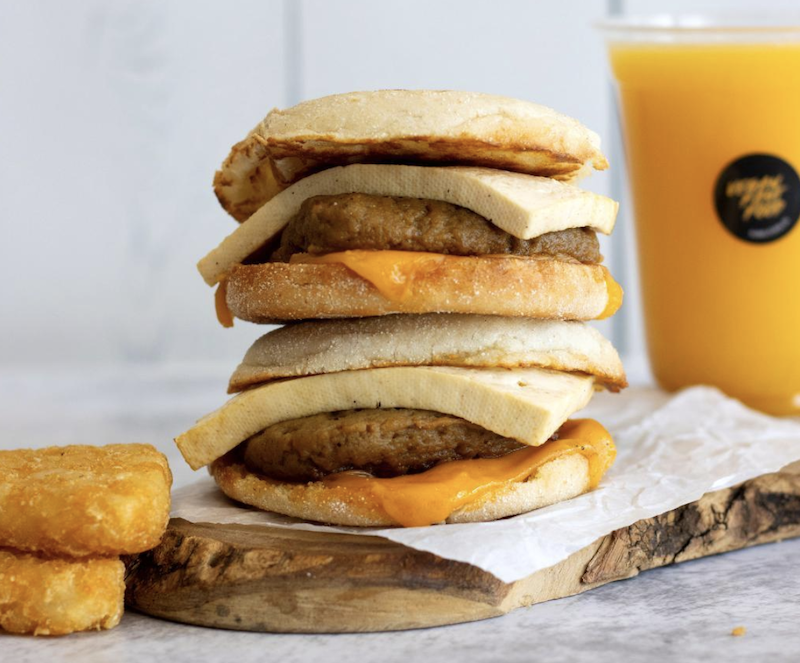 This Canadian chain is crossing the border! Soon, New Yorkers will get a taste of this popular fast-food fare. Rebranding as Odd Burger, the menu spans the late-night cravings of burgers, chicken sandwiches, and soft-serve sundaes. The first Odd Burger is set to open soon in New York City (check the brand’s Instagram for any new updates).

Project Pollo owner Lucas Bradbury wants to make chicken-based fried chicken irrelevant. It’s a big undertaking, but he’s starting big—that is to say, in Texas. To date, Bradbury has set up 12 locations (with more coming soon), converting meat-loving Texans with his crunchy, juicy, and succulent vegan fried chicken sandwiches, tenders, and even salads. If the chicken doesn’t hook you, he’s betting the mac and cheese, papas, and fried pickles will. 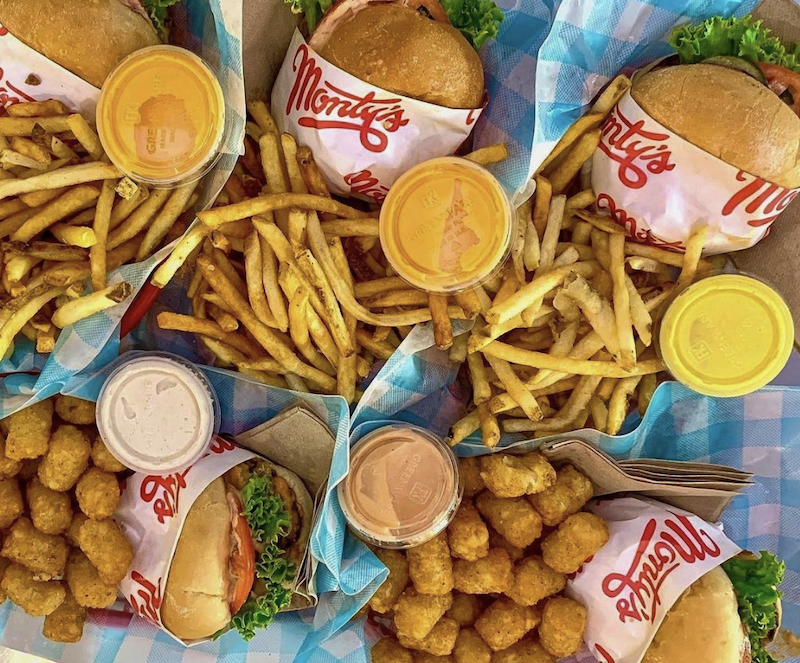 Joaquin Phoenix fans, keep your eyes off your phone while waiting in line at Monty’s—the vegan Academy Award winner has repeatedly been seen at the Koreatown location with fiancé and actress Rooney Mara. Positioned as the vegan In-N-Out, Monty’s menu offers a streamlined selection of single and double Impossible burgers, fries, tots, milkshakes, and a kale Caesar salad. 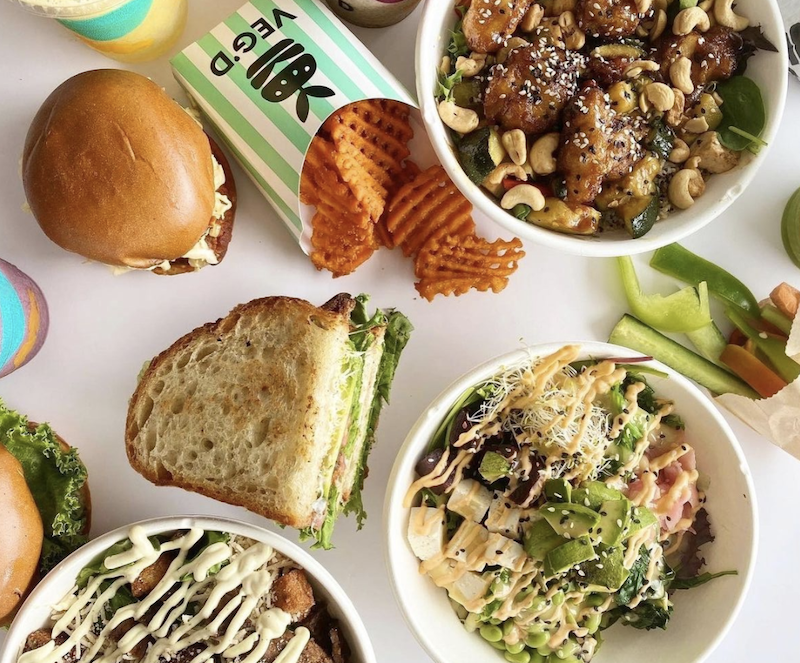 Celebrity vegan chef and restaurateur Matthew Kenney started with fine dining, but he’s recently found his footing in fast-food fare. While his more casual concepts operate under different brands (New.Burger and VEG’D), they all fall under the Matthew Kenney Cuisine umbrella. Each features a slightly different menu but you can always rely on finding a solid burger, fries, and sweets. 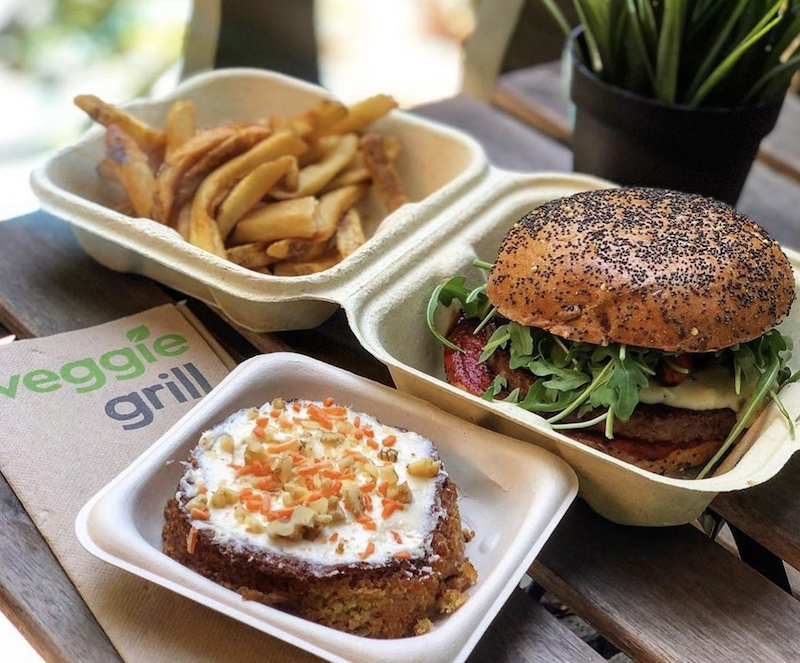 Founded in 2006 in Irvine, CA, this national vegan chain was frying up plant-based chicken wings way before it was a thing. In fact, Veggie Grill predates the buffalo cauliflower trend. There’s a comfort that comes with a visit to Veggie Grill—you can take any omnivore, treat them to the mac and cheese, Sante Fe Chicken Sandwich, and sweet potato fries, and know that they’ll walk away with a positive perspective about veganism. 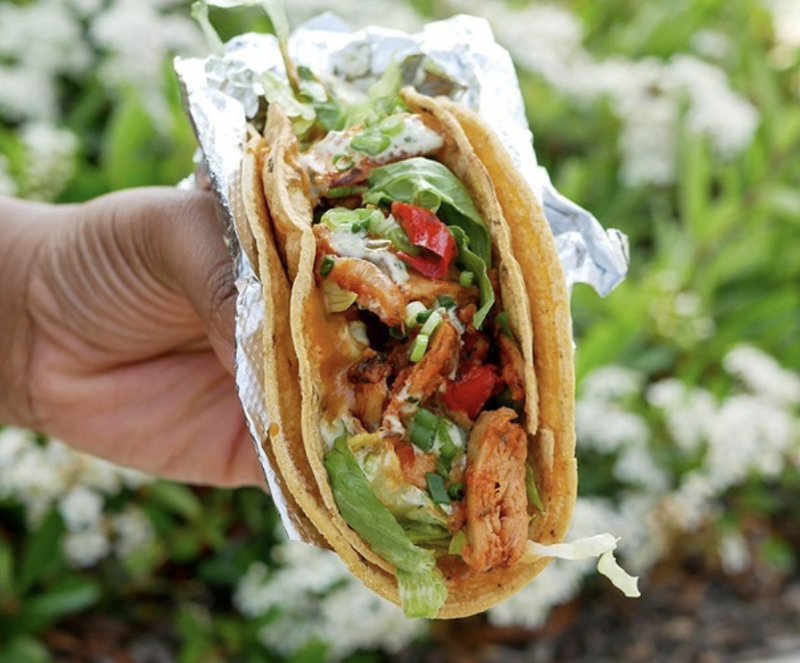 An offshoot of Veggie Grill, this quick concept emerged as a carryout and delivery-only chain in 2020. The chain offers veganized versions of Mexican-esque fast-food favorites including burritos, bowls, nachos, and tacos. You choose your protein (mushroom asada, chickin’ tinga, etc), and the rest is loaded up with guacamole, pickled red onions, sour cream, beans, and other accouterments. 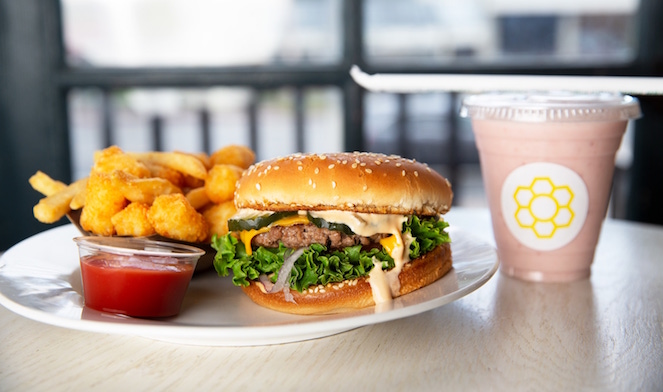 Named the best vegan burger in Los Angeles, Honeybee Burger has made a name for itself since opening their first brick-and-mortar in 2019. The buzz-worthy chain with two locations (and a third coming to New York city), has previously partnered with Akua Kelp Burger, Atlas Monroe, and Oatly to bring hungry Angelenos iconic, one-of-a-kind kelp burgers, crispy fried chicken sandwiches, and oat-based soft serve. If a classic burger is more your style, choose between Impossible or Beyond Meat patties for your next award-winning handheld. Talk about options!

For more vegan fast food, read:
Fatburger’s CEO on the Future of Vegan Fast Food
10 Vegan Hacks for Your Favorite Fast-Food Joints
How to Order Vegan at Taco Bell