It seems that every week in the world of vegan food news is more exciting than the last and this week is no exception. Vegan frozen dessert brand Dream Pops is bringing us new chocolate-covered Butterfinger-style candy bites—that can now be shipped directly to your door. MeliBio is giving foodies a taste of its sustainable vegan honey in San Francisco. Plus, Hong Kong’s OmniFoods brand launches its vegan seafood through one special retailer in the US. Read on for more.

If you haven’t yet discovered bite-sized Dream Pops’ chocolate candies in the frozen aisle of your local supermarket, you might just be living on another planet. Since launching at Whole Foods Markets in 2021, they’ve expanded availability to thousands of stores across the US and Canada. The dreamy vegan candy has not only reinvented what you’d imagine a frozen dessert should be, but they’ve also honed in on all the cult classic flavors (banana cream, anyone?). 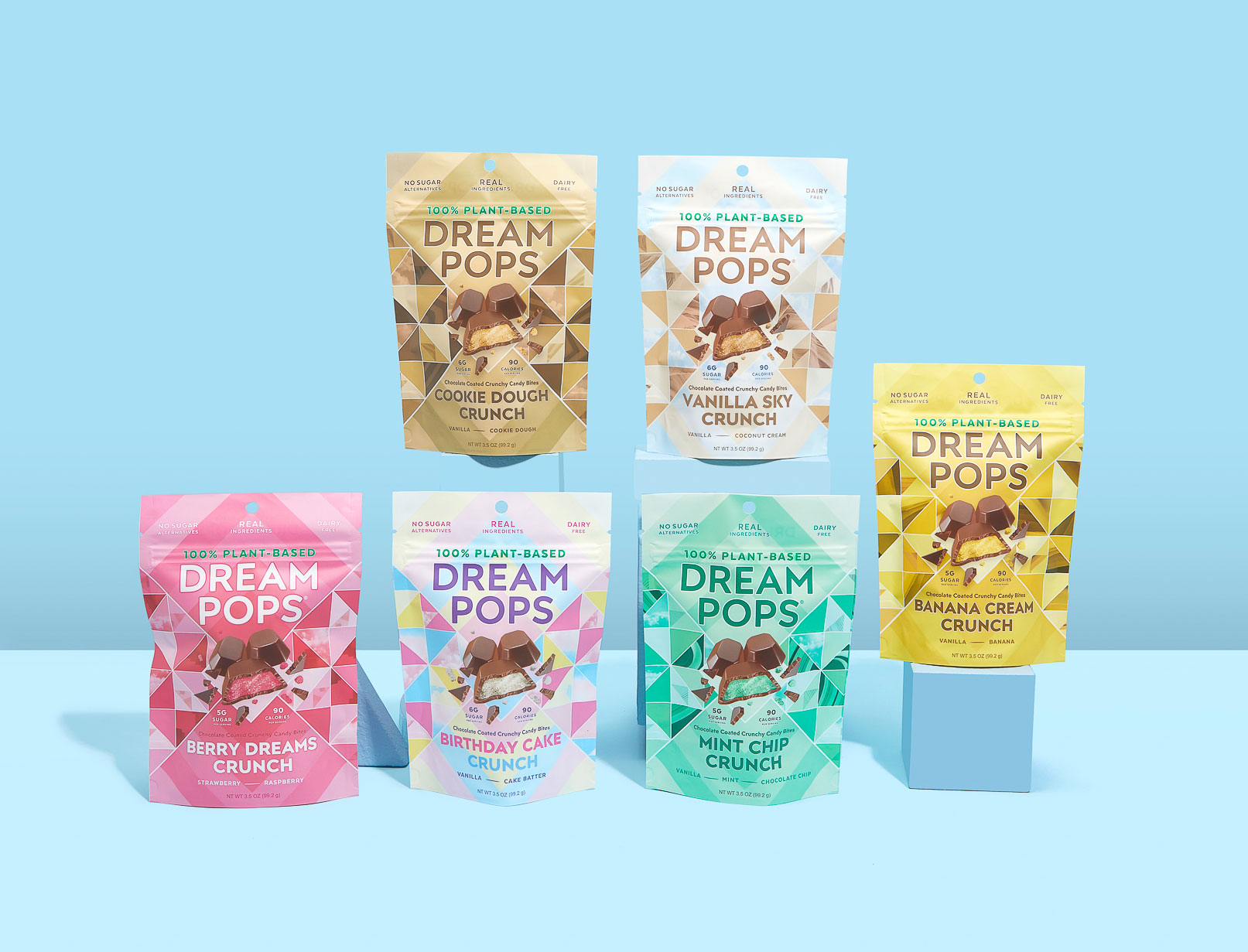 Today, the vegan brand launches its newest shelf-stable offering: Dream Pops Crunch. Available in six flavors (Berry Dreams, Vanilla Sky, Birthday Cake, Banana Cream, Mint Chip, and Cookie Dough), these confections feature a crunchy cookie interior that is reminiscent of the old-fashioned Butterfinger candy bar wrapped in dark chocolate. “The Crunch product is something we have been developing for a few years now and we have teased it at the last few trade shows,” Dream Pops Co-founder and CEO David Greenfeld told VegNews. “It’s our take on a better for you, plant-based alternative to Butterfinger or Whoppers.”

The new Dream Pops Crunch candy is available on the brand’s website—which, also as of today, offers a direct-to-consumer shopping experience so you can have the products delivered to your door. And fear not: Dream Pops is integrating options such as Instacart, GoPuff, and Last Mile delivery options in its website checkout that allow you to have its delicate frozen treats delivered from available local suppliers so they don’t arrive in a melty mess. Starting in September, the new product will also launch through Amazon and select retailers before a larger rollout to thousands more stores.

Founded in Berkeley, CA in 2020 by scientist Aaron Schaller, PhD, and honey industry executive Darko Mandich, MeliBio’s first product, plant-based honey, was unveiled in October 2020 after a blind taste test of industry leaders revealed that the honey was indistinguishable from traditional honey—and it doesn’t hurts bees or pose a significant biodiversity threat to the world’s crops. And now, the brand has international companies lining up for a chance to include its vegan honey on their menus and in their products. 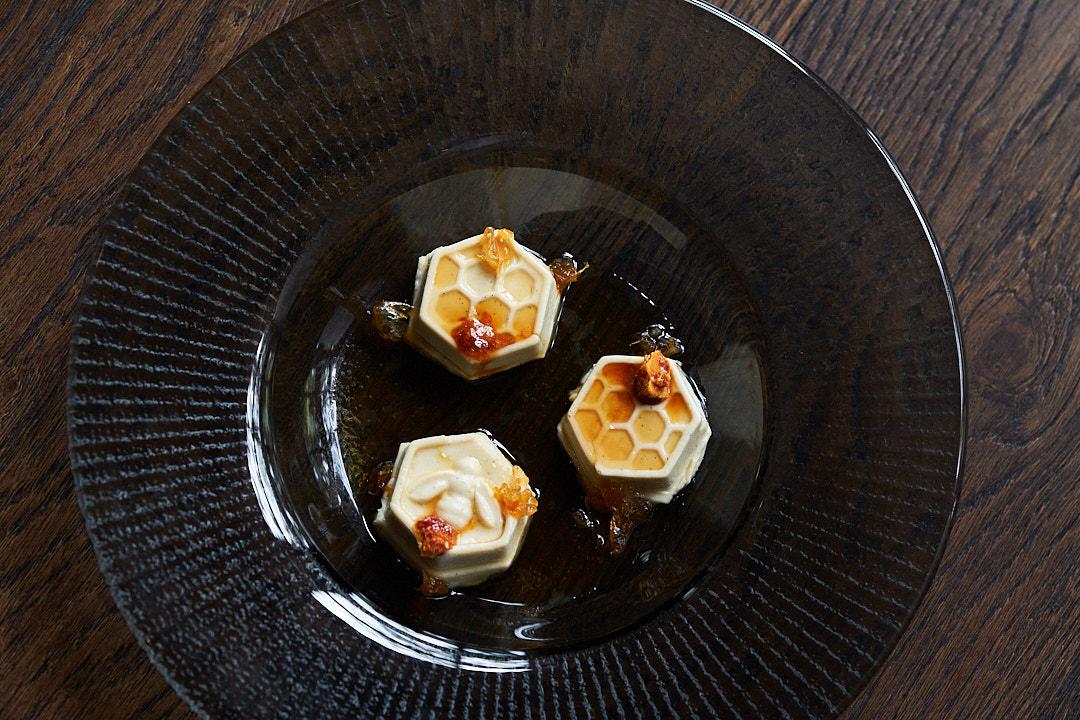 This summer, MeliBio is partnering with Matthew Kenney’s upscale vegan restaurant, BAIA, in San Francisco for one final taste test through a limited summer menu, featuring a bruschetta appetizer and a panna cotta dessert, before officially launching their sustainable bee-free honey later this year. Guests of BAIA will have a chance to be among the world’s first to sample MeliBio’s bee-free honey until September.

“Many times while developing a new plant-based dish I think, ‘I wish I could use honey.’ Unfortunately, many chefs struggle with the standard industry alternatives, such as agave, which miss the distinct flavor and nutrition profile of honey,” BAIA Executive Chef Joshua Yap said in a statement. “MeliBio is exactly what I, and other chefs, have been looking for. Not only is it real honey from plants, not bees, but it provides an ethical and sustainable option for restaurateurs and consumers alike.”

While we love to bring you all the latest intel on vegan products that curb your cravings for Big Macs, Pumpkin Spice Lattes, and Cinnabon, sometimes a feel-good snack is worth a mention, too. This week, snack brand RIND is launching limited-edition peach chips in time for all the sweet, summery fruit snacking. 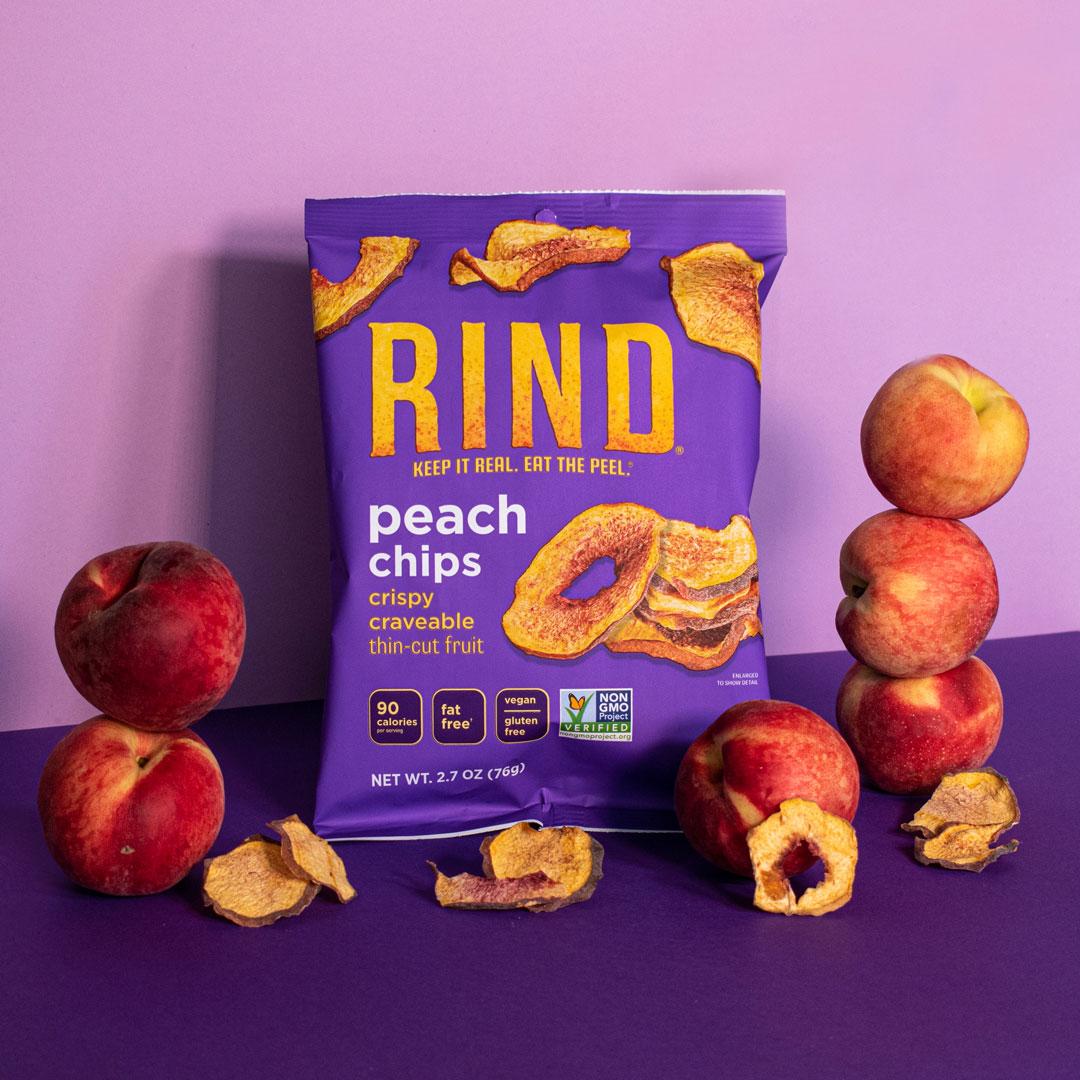 If you’re not familiar with this sustainable whole-fruit snack brand, RIND uses upcycled, rescued produce in its sourcing and drying processes while retaining the nutrient-rich fruit skin whenever possible. As a result, RIND has successfully diverted over 350,000 pounds of edible food waste in 2021 alone, staying true to the brand’s mission to maximize nutrition and minimize waste. This year, the brand is on track to divert over one million pounds of edible food waste from landfills.

Available exclusively through online retailer Thrive Market, the new RIND Peach Chips use single-ingredient California peaches with nothing else added. “The time was ripe for a bolder, fresher take on fruit snacking—one that is better aligned with consumers’ preferences for pure, whole fruit with big, bright flavor,” Matt Weiss, RIND’s founder and CEO, said in a statement. “The idea of taking one of the most beloved staples of summer, like yellow peaches, and creating a tangy, thin-cut chip was there for the picking.”

4 OmniFoods’ seafood arrives in the US 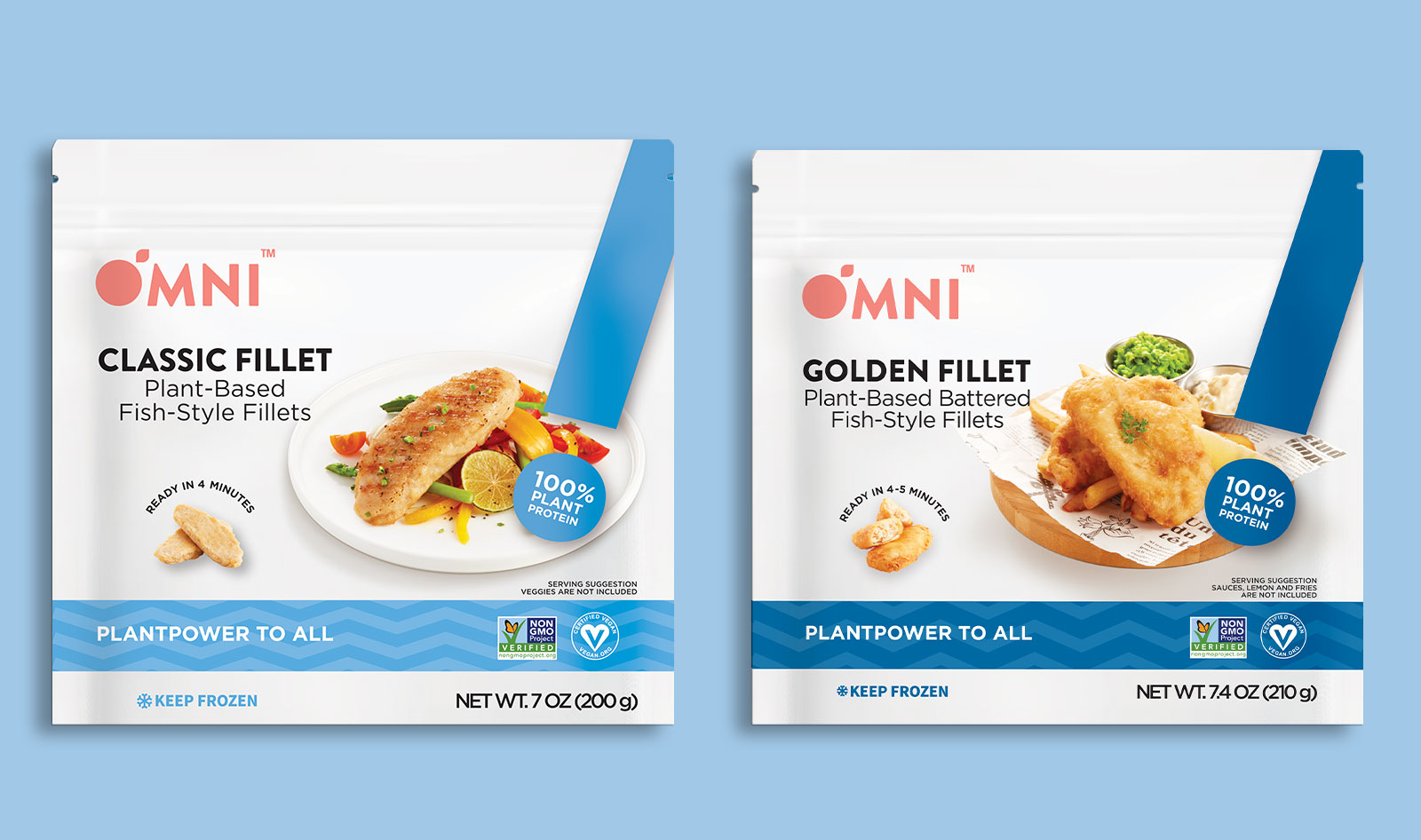 Ultimately, OmniFoods aims to save the world with vegan meat and seafood alternatives, especially in Asia where seafood is the top meat category. “After the successful launch of our OmniPork series throughout the US last year, we are incredibly excited to offer our new OmniSeafood products through our partners GTFO It’s Vegan,” David Yeung, Co-founder and CEO of Green Monday Holdings and OmniFoods, said in a statement. “By providing our growing consumer base with a healthy and delicious plant-based fish alternative, we continue to fulfill our mission to construct a multi-faceted global ecosystem of future food that helps to combat climate change, food insecurity, public health crisis, planetary devastation, and the issue of overfishing and unsustainable fishing practices.”

You may have already added Hooray’s hyperrealistic vegan bacon strips—which launched in Whole Foods Markets in 2020—to your breakfast sandwich. But now, they’ve come up with something better: a new “awesomer” bacon that’s even meatier. Arriving at grocery stores and restaurants like Fuddruckers nationwide this month, its vegan bacon 2.0 is designed to mimic pork bacon like never before. Every strip of Awesomer bacon now includes a variety of crispy and chewy parts, thanks to Hooray Foods’ evolved proprietary emulsion-forming technology. Additionally, new natural flavors further the fatty and meaty flavor of pork bacon. 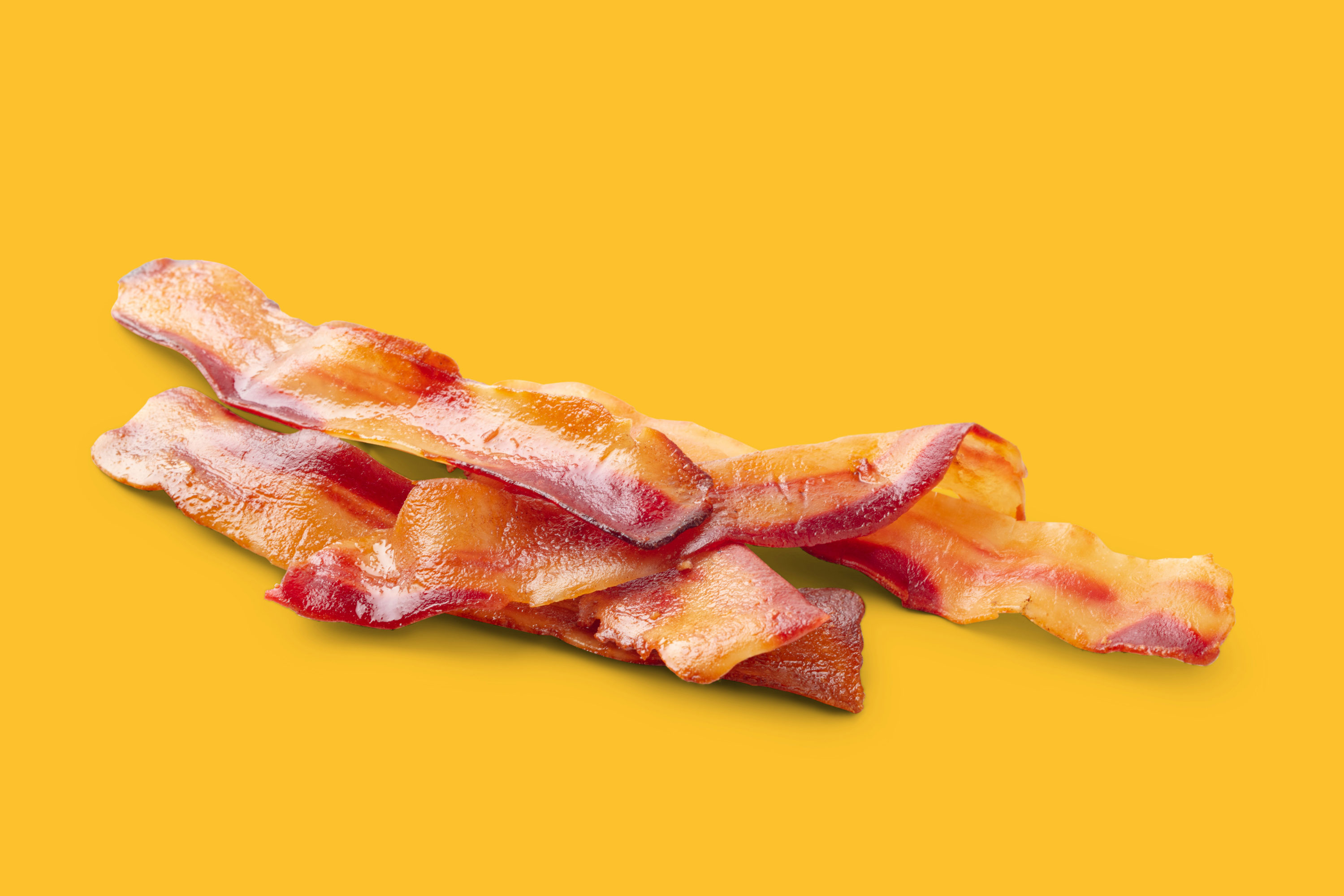 “We’ve spent more than a year and a half testing a variety of ingredients to improve our texture, researching flavors to create a rounder flavor profile, and conducting a comprehensive color analysis to elevate the appearance of the product,” Hooray Foods Food Scientist Patrick Dziura said in a statement. “The end result is a winning combination that delivers the full sensory experience of cooking and eating bacon.”

Shoppers can identify the new version with a green “AWESOMER” sticker on the package.

After Selling 1.3 Million Vegan Bacon Strips in the US, Hooray Foods Expands to Canada