Chef Theo Mourad is applying the vast knowledge he gained from working at Blue Hill at Stone Barns into a new brand, THEO’s Plant Based. The brand is first coming to market with chef-crafted vegan jerky made from organic beets in Sea Salt & Cracked Pepper, Sesame-Ginger Teriyaki, and Savory BBQ flavors.

With this product, Mourad is taking his knowledge of farm-to-table cooking—a practice popularized by Blue Hill at Stone Barns—into a new direction that focuses on whole vegetables as nutritious, minimally processed snacks.

“It is in my opinion that plant-based products should focus on agricultural products rather than trying to be a replica of beef, for example,” Mourad told VegNews. “We’re not doing anything revolutionary. It’s really just high quality inputs and attention to detail.”

Starting today, THEO’s Plant Based BEET jerky is available for pre-order through the company website with orders shipping out in September.

Making vegan jerky out of beets

Beets are often revered by chefs for their earthy flavors and crimson hues and to make its beet jerky, THEO’s preserved the integrity of the underutilized root vegetable by dehydrating it and creating seasoning blends to complement its natural flavors. “Beets specifically are extremely nutritious and a bit polarizing and underused,” Mourad said. “So I wanted to create something that was accessible, an easy-to-eat product where somebody could get the benefits of beets. Dehydration hardly compromises the nutrition of the vegetable itself.” 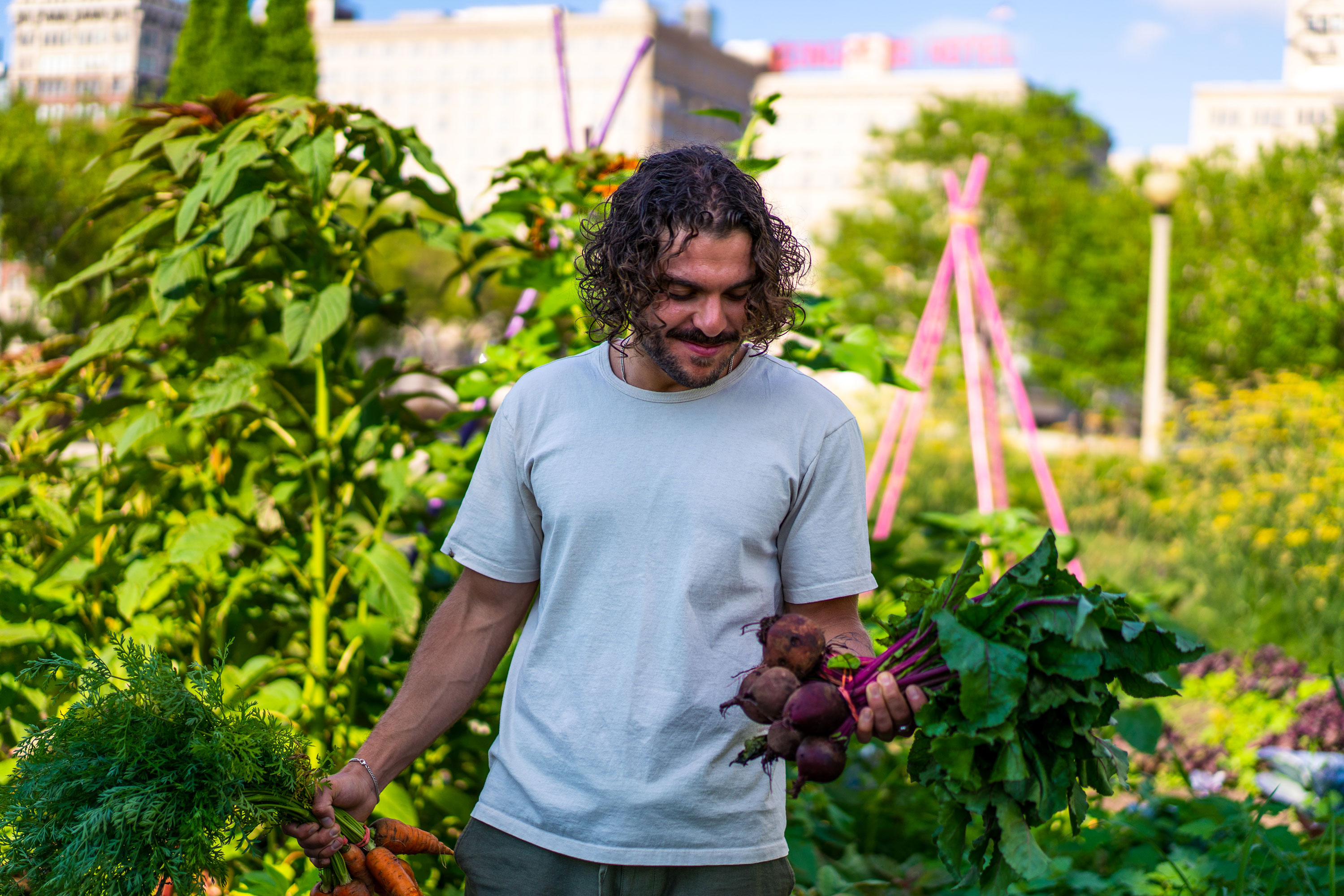 At Blue Hill at Stone Barns, Mourad was absorbed into the world of farm-to-table cookery which served as great inspiration for his new, vegetable-centric brand. “[It’s an] absolutely intensive work environment where they are force-feeding you, literally, this idea and concept of taking agricultural products at peak season, keeping them as simple as possible, and honoring them for what they are,” Mourad describes his experience at Blue Hill. “That whole line of thinking, at a foundational level, is the same as we’re doing with THEO’s Plant Based but just applying it to consumer products in the plant-based space.”

To that end, the company is working with a supplier in New York to take organic beets from the ground to their dehydrators as quickly as possible to preserve maximum freshness and nutrition. To reduce waste, the company uses the beet tops and bottoms, along with peels, and packs the jerky in compostable packaging.

Taking vegan snacks to the next level

Mourad has 10 years of culinary experience under his belt, which in addition to Blue Hill at Stone Barns includes time at vegan eatery The Lunch Room in Ann Arbor, MI, his hometown. After working at Blue Hill at Stone Barns, he moved from upstate New York to Chicago with the intent to continue working in fine dining but the COVID-19 pandemic dismantled the restaurant industry. Mourad pivoted to bringing THEO’s Plant Based to life and partnered with his childhood friend and longtime vegan Aaron Brodkey. For his part, Brodkey recently left his position as Program Manager at Big Idea Ventures (a well-known alternative protein accelerator and venture capital firm) to fully focus on developing the plant-based brand. 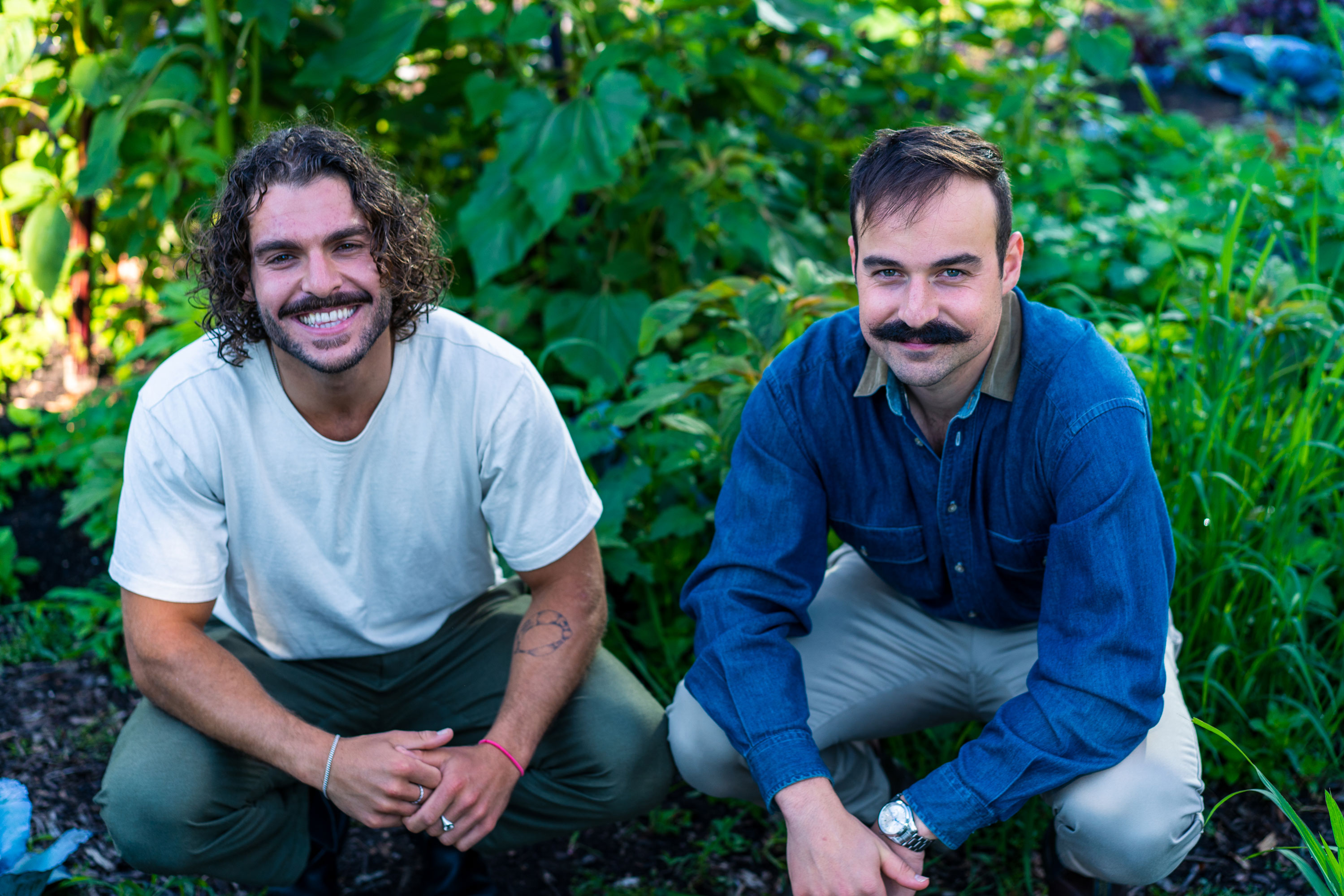 “I was really impressed by what Theo was able to do with beets,” Brodkey told VegNews, explaining he sampled many meat alternatives while at Big Idea Ventures. “I’ve been vegan for seven years and can attest that it’s vegan-approved on my end.”

This participation means that THEO’s beet jerky will also be available in Whole Foods Market stores in the Chicago metro area, with additional Midwest locations in the fall, and an eye on expansion to other regions. THEO’s Plant Based is also partnering with environmental organization 1% for the Planet and will donate at least one percent of their annual sales to further healthy food access in Chicago. 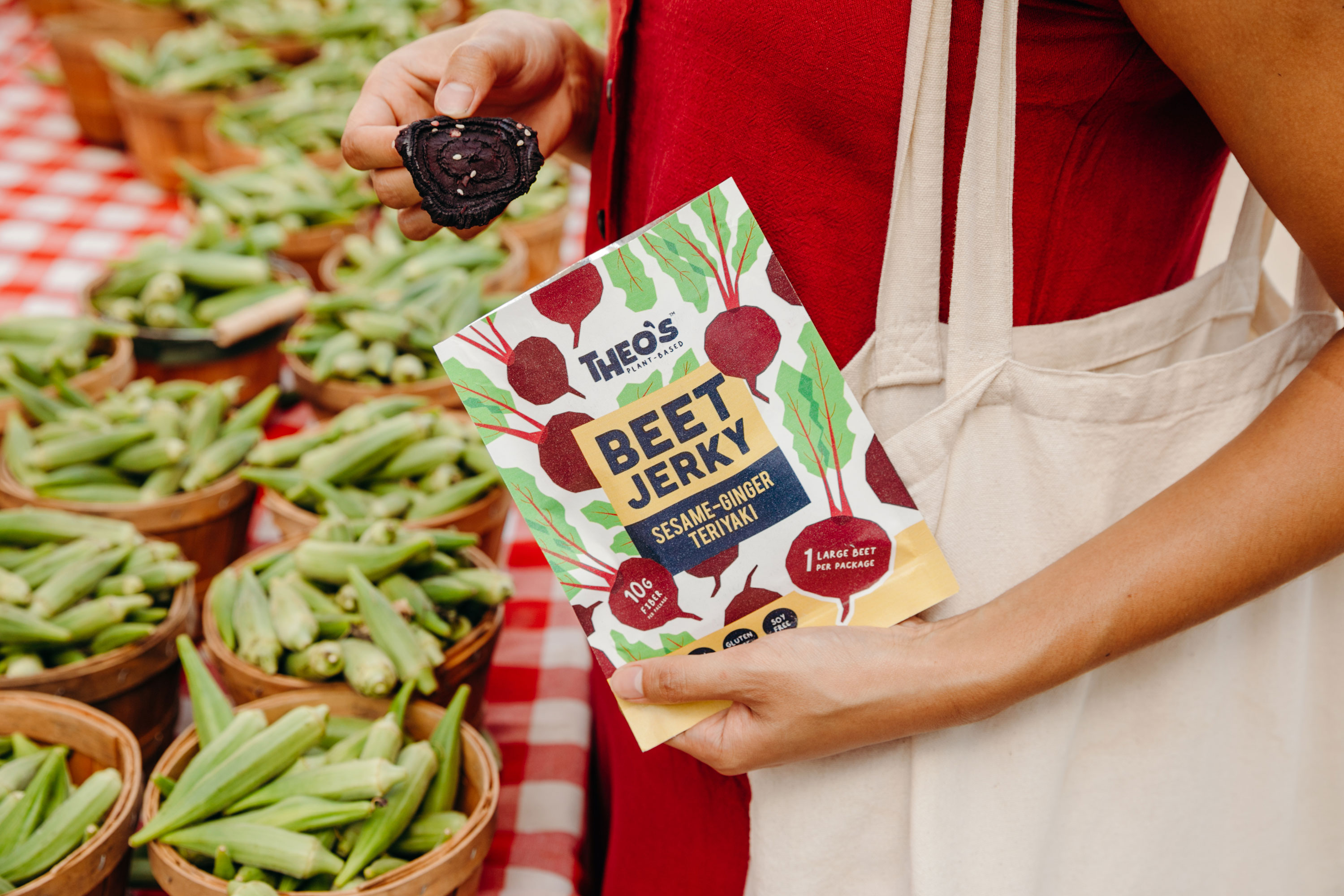 The  jerky space is ripe for innovation and already has several key players, including Beyond Meat which worked with Pepsi to develop its plant-based jerky that is now available in grocery aisles, gas stations, and convenience stores—or nearly everywhere that meat jerky is sold. Here, the mission is to help consumers easily choose a plant-based alternative to beef, an animal product that is cruel and enviornmentally damaging.

However, an emerging sub-category is vegan jerky that isn’t necessarily aiming to be a one-for-one replacement for meat jerky. Rather, it aims to preserve vegetables in their whole forms to serve health-driven snackers, who may choose plant-based one day and meat another.

THEO’s is squarely aiming for this demographic and joins others in the space, including Eat the Change—a snack brand developed by Seth Goldman (former executive chairman of Beyond Meat) and celebrity chef Spike Mendelsohn. Last year, this brand launched with vegan jerky made from “ugly” mushrooms—or portobello and crimini varieties that are bruised and/or oversized, along with their usually discarded stems that would not normally make it to the retail shelf. This year, Eat the Change released Cosmic Carrot Chews, which it created as a juice-sweetened veggie snack to please kids’ palettes.

For THEO’s Plant Based, the future is dedicated to its mission of putting whole vegetables at the center. While details are hush, Mourad says a vegetable sausage is in the works, along with other exciting items in multiple spaces in the grocery aisle, including snacks, meat, and seafood.

“We will never choose profits over ethics,” Mourad said about the company ethos. “I try to look at something [through the lens of] integrity and if there’s no integrity, I don’t want to do it.”

For the latest vegan news, read:
Will Climate Change Bring an End to Animal Agriculture?
James Beard Appoints 2 Vegan Chefs to Its Legacy Network
How Fine Vegan Cheese Is Making a Bid for the Dairy Case