In recent years, vegan cheese has come a long way in taste, texture, and also placement. While dairy-free cheeses were previously relegated to obscure parts of the grocery store—or could only be found in specialty stores—in 2022, they are coming for the dairy case.

This summer, New York City-based vegan cheese brand RIND entered the dairy case at Whole Foods Market in the NoMad neighborhood of NYC. The brand’s fine vegan cheeses, aged in the traditional way but made without exploiting cows, are cut-to-order from wheels by Whole Foods cheesemongers. This month, RIND’s vegan cheeses are expanding to the dairy cases of five additional Whole Foods stores in NYC, including Manhattan West, Tribeca, and Columbus Circle in Manhattan, as well as Gowanus and Williamsburg stores in Brooklyn.

“We’re thrilled that our aged, French-style vegan Cambleu and Bleu cheese will soon be available for sale by the pound in six Whole Foods Market NYC locations,” RIND co-founder Dina DiCenso said in a statement. “Whole Foods Market is known for its highly curated selection of cheeses, and it is an honor to be the first plant-based cheese to be offered in the artisanal cheese cases of these stores.”

Throughout August, these Whole Foods stores will hold demonstrations to promote the arrival of RIND in their fine dairy cases. “We’re excited that Whole Foods Market shoppers will have the opportunity to sample our extraordinary cheese during a series of sampling demos throughout the month,” RIND co-founder Joshua Katcher said in a statement. “We’re particularly proud of our aged cheese, and we encourage people to stop into a market location to sample it and experience how good plant-based cheeses can be.” 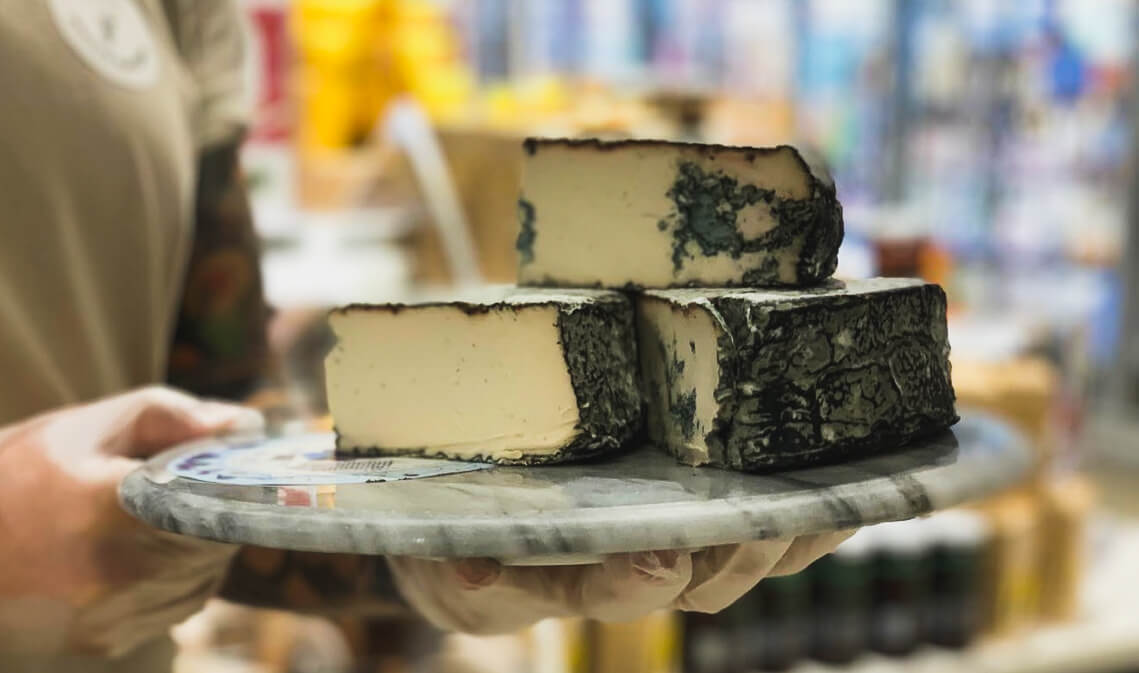 Founded in 2017 by Katcher (known for his vegan fashion brand Brave Gentleman) and DiCenso (owner of vegan shop Gristle Tattoo), the plant-based cheese brand first launched in select New York City restaurants in 2019. The duo developed RIND products as both dairy-free alternatives to traditional fine cheeses and as products that are delicious and craveable in their own right.

“Joshua and I have developed a proprietary blend of flavors that anyone who appreciates brie, Camembert, bleu, and other mold-rind cheeses will love,” DiCenso previously told VegNews. And as it turns out, food industry professionals have already given RIND the highest praises. In 2020, the Specialty Foods Association, a membership-based network made up of food industry professionals, awarded RIND’s Classic Cambleu top prize in the 2020 Sofi Awards’ “Plant-Based, Other Dairy” category. “It’s exciting to see the enthusiasm for our vegan cheese,” Katcher said at the time of RIND’s win. “This top award confirms what so many customers and retailers say on our social media channels, and what we’ve worked so hard to achieve—a bloomy, intense, buttery, and rich, soft-ripened vegan cheese.”

Prior to its launch inside the Whole Foods fine dairy case, RIND’s products were available through select retailers nationwide, along with online at Vegan Essentials. The company is also expanding its vegan cheese to The Wynn Las Vegas with bigger launches in the works. 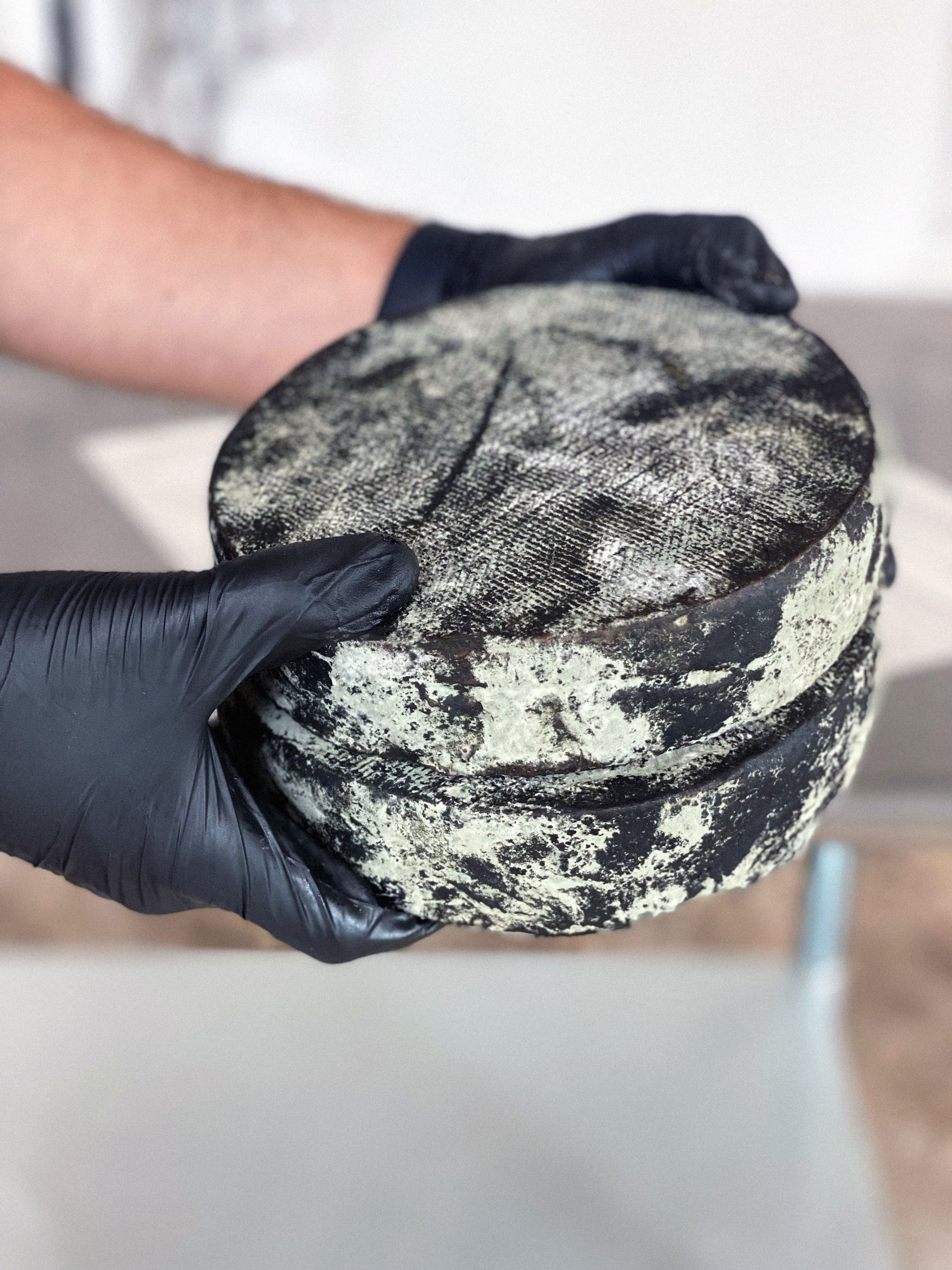 Vegan cheese is on the move

From Violife to Follow Your Heart, many companies have long nailed vegan versions of common cheeses such as mozzarella and cheddar. However, new categories have gotten vegan makeovers in recent years. Miyoko’s Creamery is the best known vegan artisanal cheese maker and since 2014, has been crafting traditionally aged cheeses in flavors such Smoked English Farmhouse, Black Ash, and Herbes de Provence. The brand has expanded into new cheese types since then, including first-to-market liquid mozzarella and cottage cheese—a first-of-its kind vegan cheese the company is perfecting with the help of watermelon seeds.

Miyoko’s is also vying for the dairy case with a new line of traditionally aged cheeses it showcased at trade show Natural Foods Expo West in March. Additional details about these longer-aged cheeses are still under wraps.

Vegan brand Nuts for Cheese is also taking aim at the dairy case with its cashew-based cheeses. Earlier this year, the brand raised $5.35 million in funding led by Forage Capital Partners. Started in 2015 by vegan chef Margaret Coons, Nuts for Cheese makes cashew-based gourmet cheeses in flavors such as Artichoke & Herb, Un-brie-lievable, and Black Garlic, and will use the new funding to grow the brand.